2 Comments Posted by infinitezenith on February 2, 2020

“If everyone is thinking alike, someone isn’t thinking.” –General George S. Patton

The two vessels, Ping Hai and Ning Hai, report encountering a high-ranking Siren during a patrol assignment. The Azur Lane deploy Sheffield and Edinburg to the Sakura Empire to investigate. They learn that Akagi is collaborating with the Observer to build Project Orochi, but are compromised, escaping to a remote island. In the ensuring conflict, Javelin and Laffey encounter Ayanami again but refuses to engage her. Sheffield and Edinburg return to the others with a black Mental Cube. Meanwhile, Belfast steadily pushes Enterprise to spend more time with the others, reminding her that the Ship Girls are human. Acquisition of the Mental Cube prompts the Azur Lane to intervene in a naval battle to prevent the Sakura Empire’s plans from reaching fruition. During the engagement, Enterprise single-handedly destroys Akagi and cripples Kaga. She realises her fears of the ocean here and disappears shortly after. The Observer reveals that Project Orochi is ready, leading others in the Sakura Empire to wonder what Akagi and Kaga had concealed. When Enterprise reappears, she wipes Zuikaku and Shoukaku, but is stopped when Ayanami intervenes. Laffey and Javelin manage to save Ayanami, who is subsequently taken prisoner. The two look after Ayanami, who begins to realise that her enemy is not so different than her friends in the Sakura Empire. With the higher-ups in the Sakura Empire doubting the necessity of Project Oricihi, the Observer compels Kaga to continue. In a flashback, Akagi’s interest in the program had been motivated by a desire to resurrect Amagi. Kaga realises that while she will never be by Akagi’s side, and makes off with the Oricihi. Enterprise’s visions are worsening, and she begins to understand that Orochi was born from an instinctive desire for conflict. Things worsen when another Siren, Purifier, arrives at the Azur Lane’s base and makes off with the Mental Cube. This is where Azur Lane closes off: after the tenth episode, production issues caused the remaining Azur Lane episodes to be deferred until March, and viewers are decidedly left with more questions than answers after ten episodes have elapsed.

The main challenge in Azur Lane lies with the fact that the anime has elected to run with three concurrent themes simultaneously within the space of a twelve-episode series. Enterprise’s weariness of the unending nature of warfare, and her own internal conflict between wanting to lead a normal life and serving her duty is the first of these themes. Concurrently, Laffey and Javelin’s insistence in befriending Ayanami shows that the factions of a war notwithstanding, at the end of the day, everyone on both sides of a conflict shares more commonalities that lead to understanding and peace, than they do the differences that prompt warfare. Finally, Akagi and Kaga’s interest in a proverbial deal with the Devil in Project Orochi speaks to the intrinsic dangers of forbidden knowledge, and the price that an obsession with personal desires can command when one uses these as the guideposts for their actions without understanding the consequences of their actions. Any one of these themes alone would have stood alone in a twelve episode series, and in integrating all three into Azur Lane, the anime comes across as being incredibly turbulent, tricky to follow and inconsistent: one moment, we have Laffey and Javelin sharing a lighthearted moment with Ayanami, and in the next, Enterprise is brooding over her state of being and doing her utmost to distance herself from the others owing to her fearing what could be. This creates a dissonance in atmosphere and gives the sense that Azur Lane is aiming to condense an entire game’s worth of ideas into a single anime, with the inevitable end result being that none of the three themes are adequately explored. 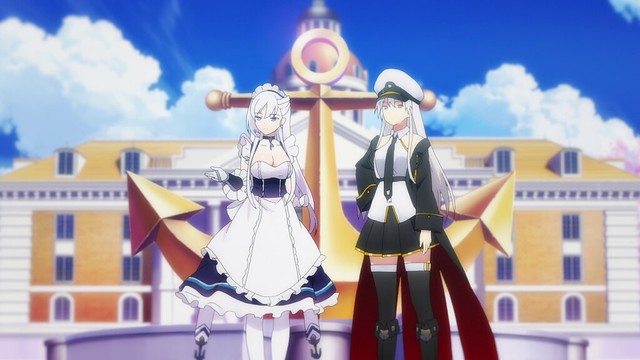 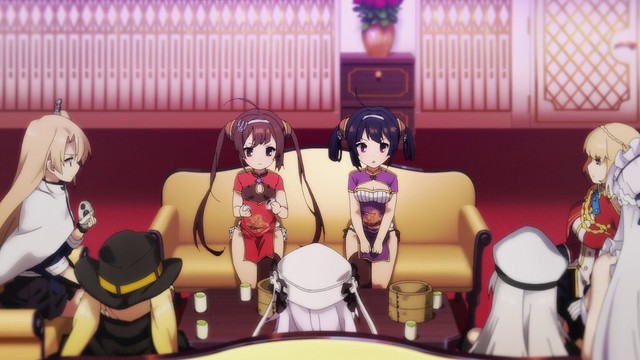 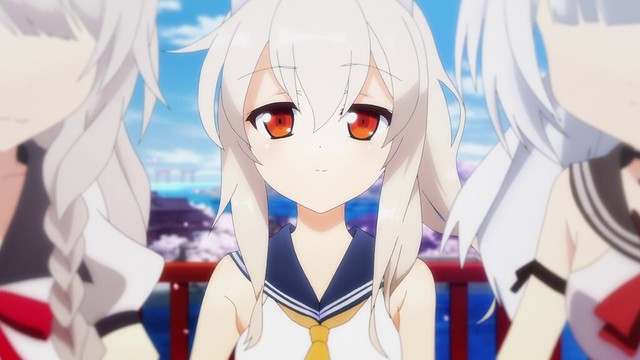 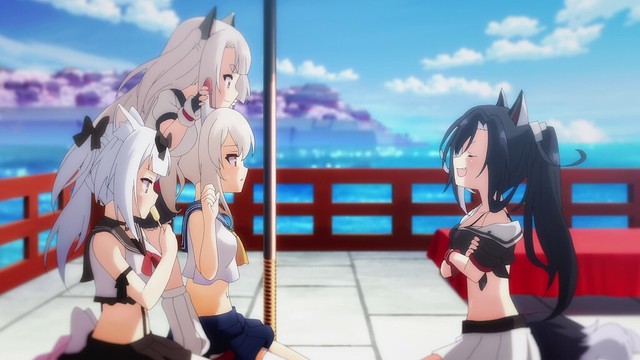 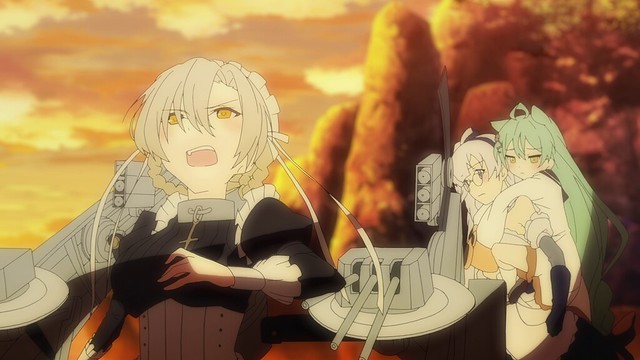 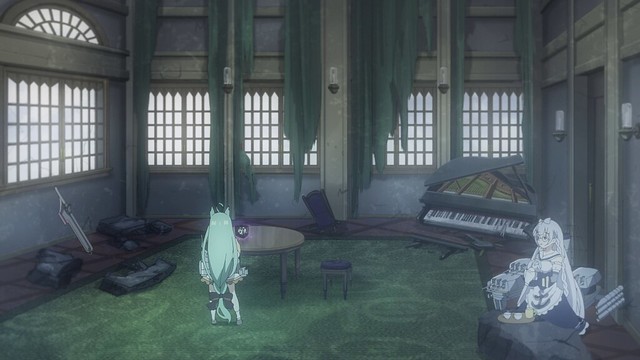 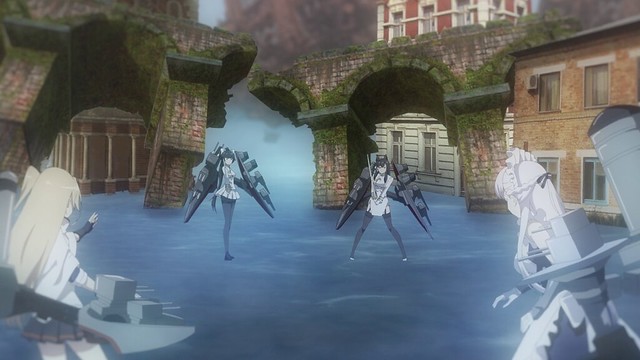 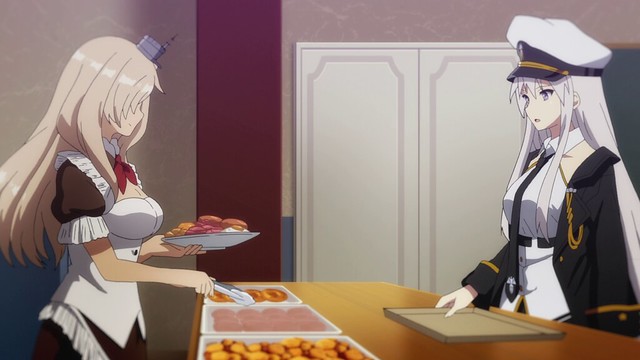 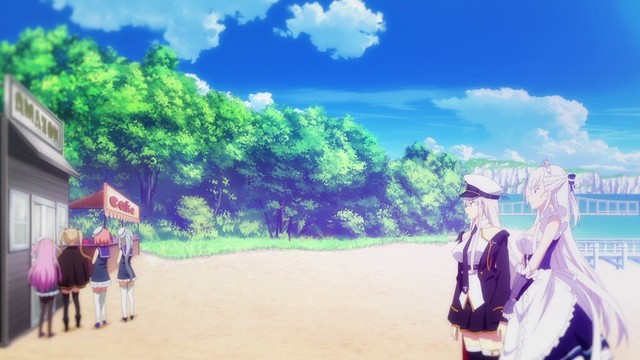 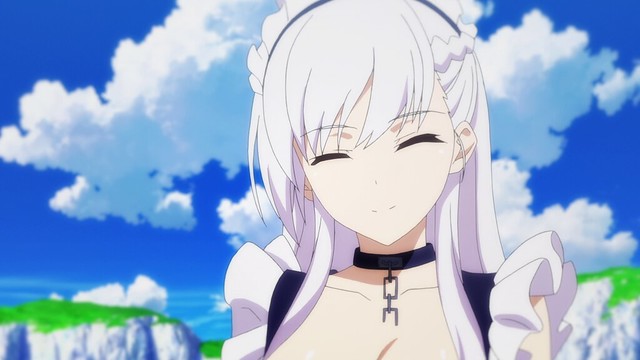 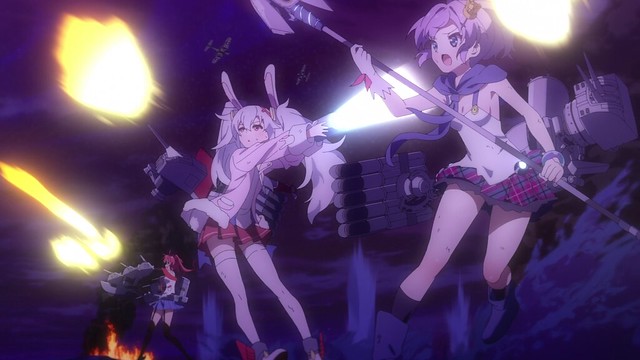 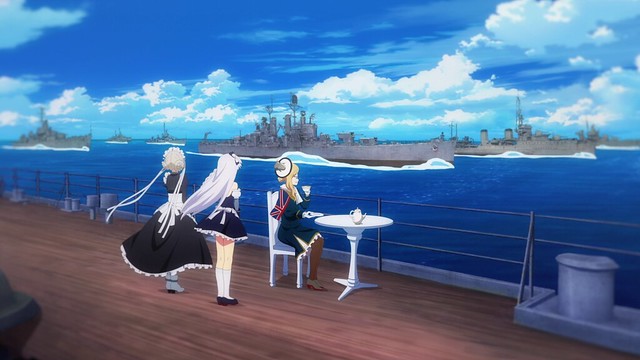 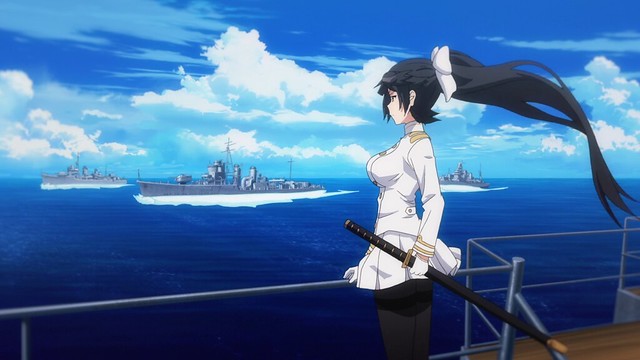 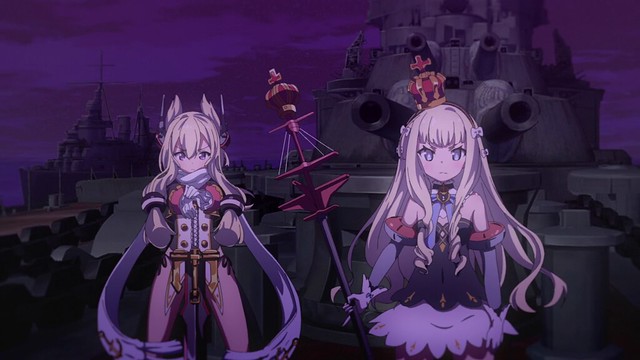 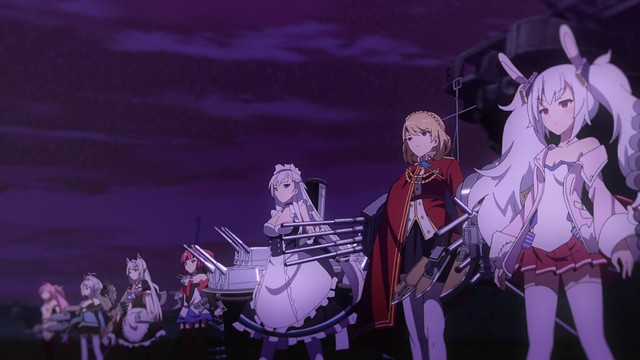 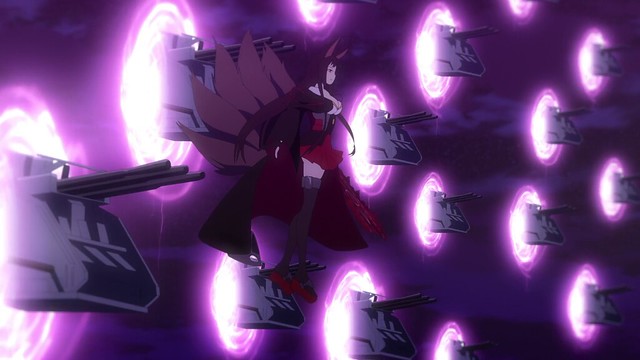 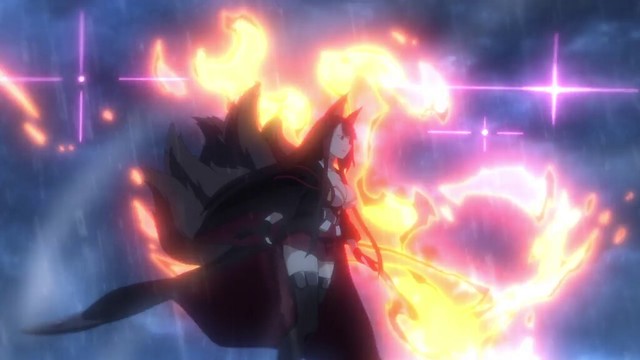 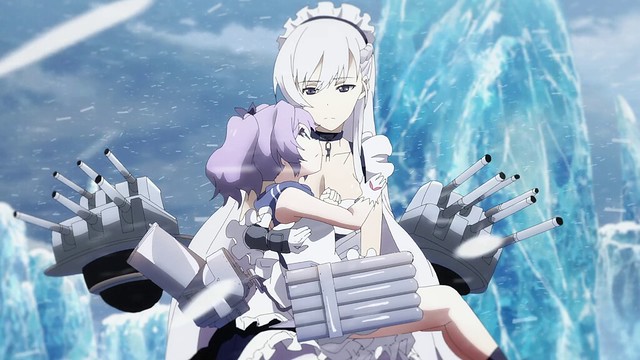 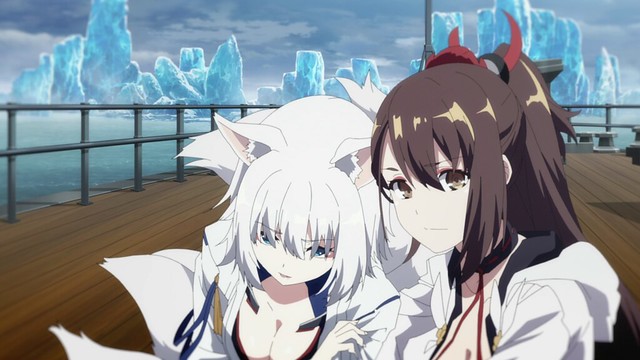 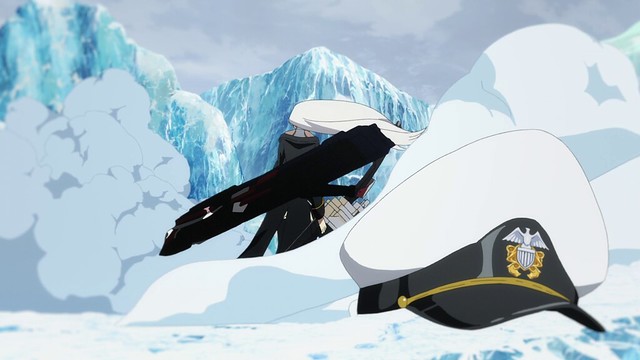 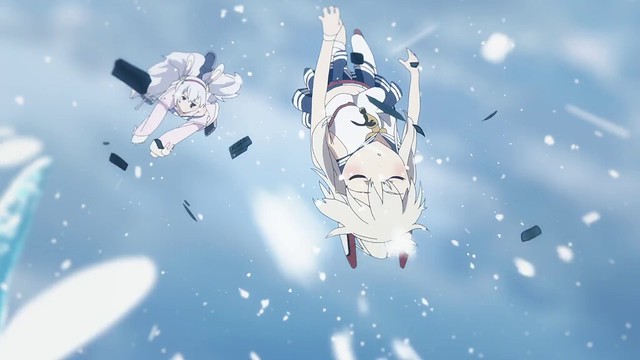 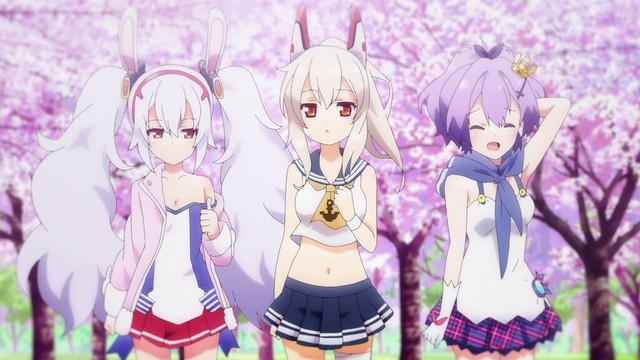 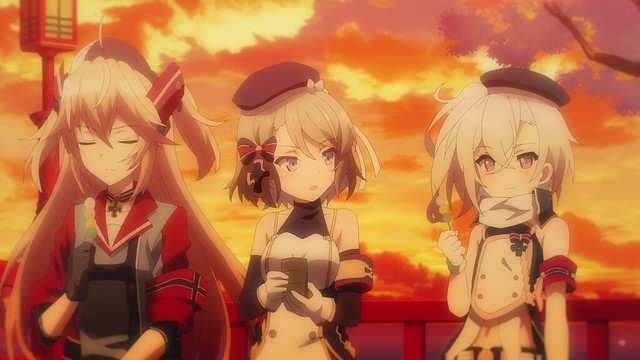 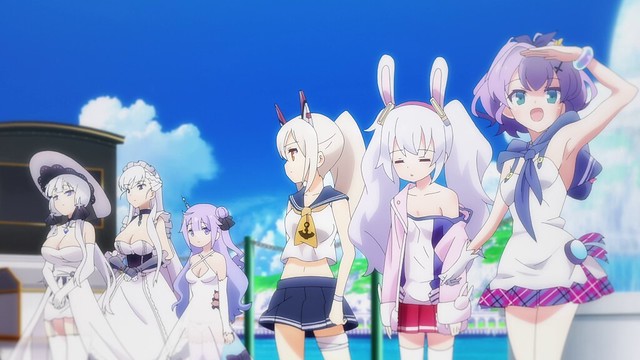 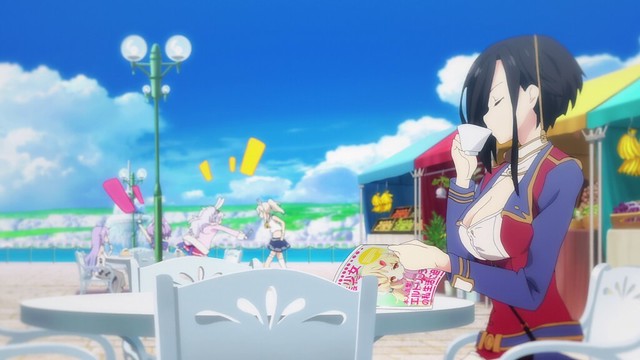 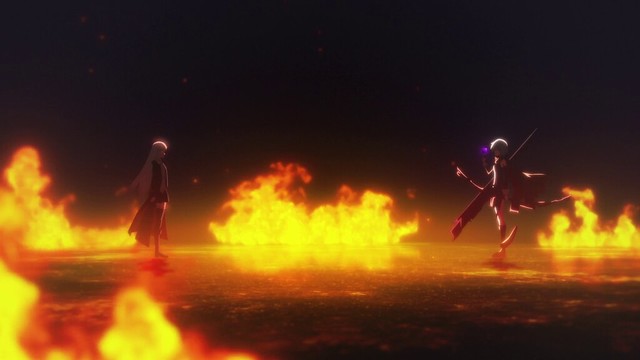 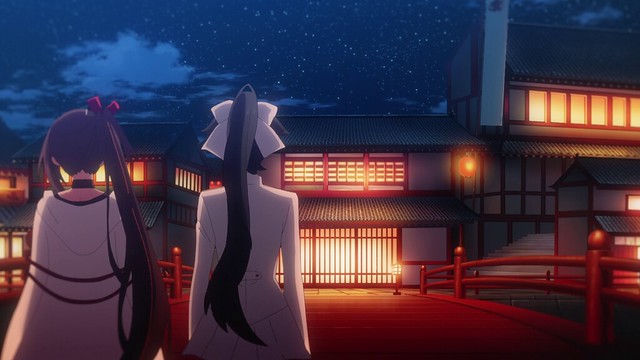 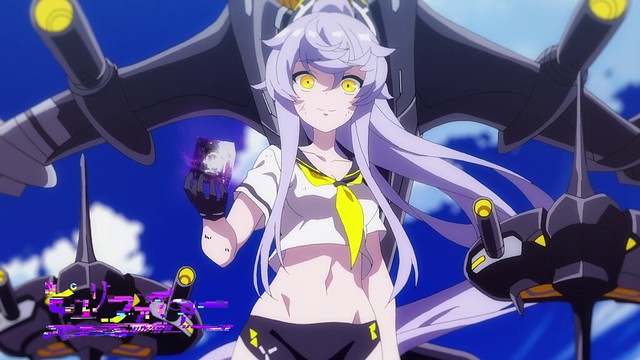 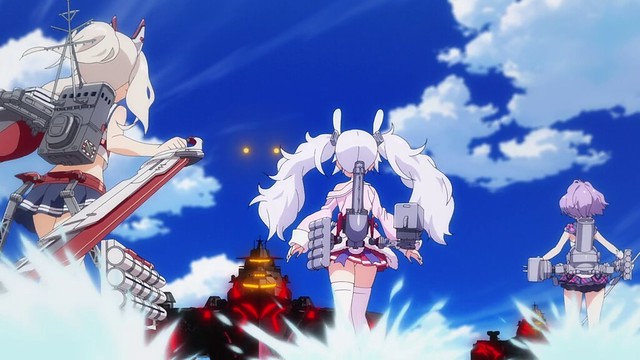 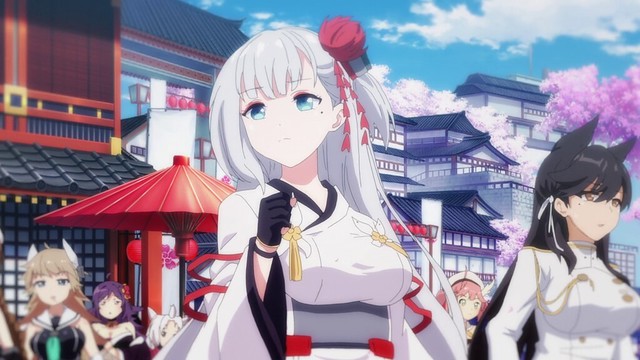 While Azur Lane does have discernible messages that are superficially explored owing to the constraints of the twelve-episode format, Azur Lane primarily succeeds in conveying to viewers the complexity in its universe. This may not necessarily be to the franchise’s advantage: an anime adaptation of a game universe is typically intended to drive viewers to pick up the game and presumably, buy in-app purchases. This is accomplished by creating a coherent story and create a sense of familiarity so that the viewer is inspired to pick up the game itself and delve further to learn more about the characters the anime adaptation portrayed. Azur Lane‘s anime adaptation, then, can be seen as promoting Enterprise and Belfast, Akagi and Kaga, Ayanami, Javelin and Laffey. However, owing to how the series has chosen to present its themes, each group’s stories are only presented at a basic level, creating none of the connection needed here. Azur Lane‘s anime, in short, does not compel me to play the game, much less go for any of its in-app purchases. The delay in productions, then, is doubly disappointing: with a story that is loosely held together, I had at least looked forwards to seeing how the fight with Kaga and Oricihi would close things up, but the series also suffers from a technical perspective, with inconsistent animations and artwork being quite evident. The net result is that there is now a wait to see how Azur Lane concludes, and the lingering sense that this wait might not have been worthwhile. Whether this is the case remains to be seen, and it will be in March when the final two episodes of Azur Lane will be released.

2 responses to “Azur Lane – An unexpected intermission and future directions”