Chikage Sakurai (Mikage’s younger sister) and Yū Nanami take an interest in the Earth Sciences Club: to welcome the new members, Mira decides the time is ripe for another barbeque, and while it rains on the day of, instructor Yuki decides to go ahead anyways, having found a spot that keeps them out of the rain. As the girls share food and conversation, they learn that Yū’s background is in meteorology. Unlike Mira and the others, Yū appears to demonstrate no love for her specialty, having taken it up to save others from trouble. Some time previously, Yū’s relatives had gone through a flood, and while no one was hurt, the resulting flood damage left her aunt in a difficult situation. The rain stops, and the girls manage to get Yū to warm up when a circumhorizontal arc (common name “fire rainbow”) appears. Mira and Ao begin preparing for the Shining Star Challenge, which screens participants with an essay. This challenge marks the first step towards a studentship at an observatory to discovery asteroids, and both girls put their best efforts into their essay. However, only Mira’s submission was accepted, and both end up being heartbroken. When Mira goes to Okinawa for the studentship, she and Yuki discover that Ao’s accompanied them, as well. Koisuru Asteroid is an anime full of surprises, and the final quarter opens strong. The new club members are immensely likeable from the beginning; Chikage gives a very calming, gentle aura standing in contrast with her sister’s intensity, and Yū’s meterological aspirations are relatable. Seven years ago, a 100-year flood affected my home town, devastating every neighbourhood near the river, and while I was not directly affected, I saw for myself how destructive nature could be. I consider myself immensely lucky to live somewhere where natural disasters are comparatively uncommon, and watching the community unite to recover was very encouraging. I myself donated to the flood recovery efforts in a bid to help out, and it’s easy to see why Yū’s taken up the choice to go into a profession that can help forecast and mitigate tragedy.

Much of the tenth episode was devoted towards welcoming Yū and Chikage into the Earth Sciences Club, but like clockwork, Koisuru Asteroid has also set in motion the journey that Mira and Ao must take towards fulfilling their promise to one another. The final minutes of the episode has Mira and Ao finalising their applications towards the competition that they’d missed the previous year, which only admits even applicants. The application entails writing As the starting point towards discovering an asteroid, Mira and Ao both pour their hearts into the qualifying essay, which asks participants to express their feelings about space and the stars. It is here that Chikage and and Yū begin to see how devoted Mira and Ao are to their craft; for Yū, she’d initially felt that Ao, Mira and Mai were too easygoing, but hearing that Ao and Mira have spent the past evenings completely dedicated towards writing and polishing their essays leads her to see them in a new light. Chikage dabbles in geomancy and forecasts that of the two, only one will make the competition. While this threatens to divide them, the two should push forwards with their dreams anyway; this ends up being precisely what happens. Mira appears to have written about the joys of sharing discoveries and fun with others, and it is here that I am reminded of a similar application I submitted to earn my admissions to the University of Calgary’s Bachelor of Health Sciences programme in bioinformatics. I no longer have the original essays that I submitted as a part of the application, but I vividly recall expressing the importance of melding the disciplines of computer science and biology as the capabilities of software and algorithms become increasingly powerful, which would let the medical sciences identify patterns and solutions in health more readily than previously possible. The end result of this path was my graduate thesis: applications of game engines to better visualise and illustrate complex biological processes for educative and communicative purposes. The nostalgic factor in Koisuru Asteroid led me to wonder: what would Mira’s essay look like? I thus answered myself, that it would be a fun exercise to recreate Mira’s essay using what we’ve seen so far in Koisuru Asteroid so far. The parameters I’ve applied for the essay are: “Describe how you feel about astronomy, the stars and space, within a 500 word limit”. The resulting composition is below:

Looking up into the blackness of space, I’ve always felt a sense of longing to explore: it’s easy to forget how large the universe is when we’re so busy in our everyday lives, but when the sun sets and the stars come out, we remind ourselves that up there in the heavens, there are entire worlds, each with their own stories to tell. The universe that we can see is estimated to be 13.7 billion light years across, but it is so incredibly vast that light from these distant worlds have not yet reached us. The size of the universe gives perspective on how small we as a species are, but it is also an invitation for discovery. Through the lens of a telescope, I’ve gazed upon the craters of the moon, and Saturn’s rings. From these images of the celestial bodies in our solar system alone, it becomes clear just how extensive the universe is, and just how much more there is to learn. There is no shortage of new discoveries to be made, making astronomy a meaningful pursuit.

Even when we look closer to Earth, the neighbourhood around our world is incredibly crowded: there is an estimated 22000 objects (as of March 2020) that have been catalogued. These objects are of interest owing to the potential dangers they pose both to our world and space travel, and I’ve long been interested in helping to discover more of these objects. Identifying asteroids in the Earth’s neighbourhood is important towards determining the threat from an asteroid impact: there are at least 1955 objects which may pose a danger in the future. Even if some of these asteroids are not likely to collide with Earth in the near future, those that pass by offer a valuable opportunity to study objects that may help us to understand the early solar system and its formation.

However, even if we look at just the neighbourhood surrounding itself, the scale of space is mind-boggling, too large for any one person to begin looking at. The experiences with my high school’s Earth Sciences club have shown me that scientific discoveries and knowledge is something to be shared, to pursue together. Our club was merged from a group of astronomy and geology students, and while we started out with distinct interests, spending time towards learning about one another’s disciplines has shown me that discoveries are most meaningful when they are made together. I believe that this is how we go about understanding more about our universe: we must do so together, collaborating and sharing what we find for the betterment of us all. 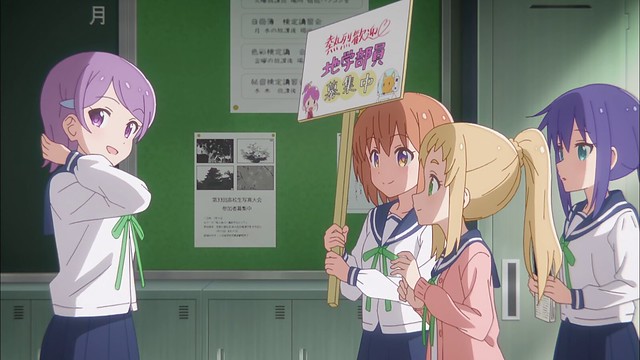 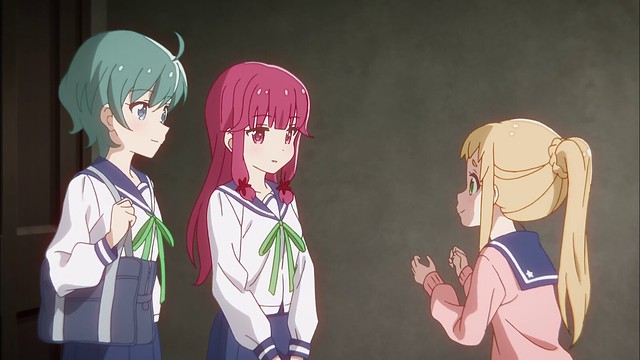 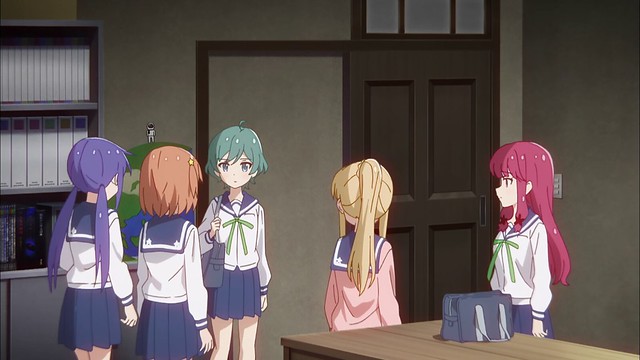 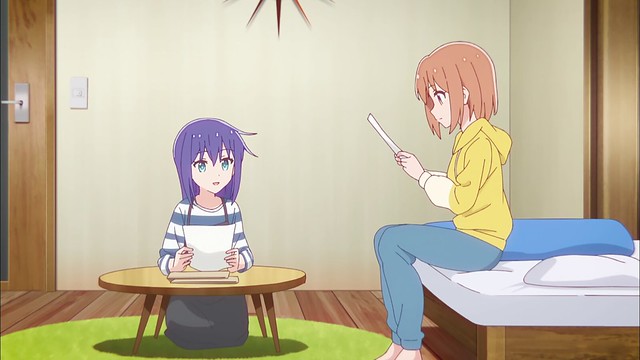 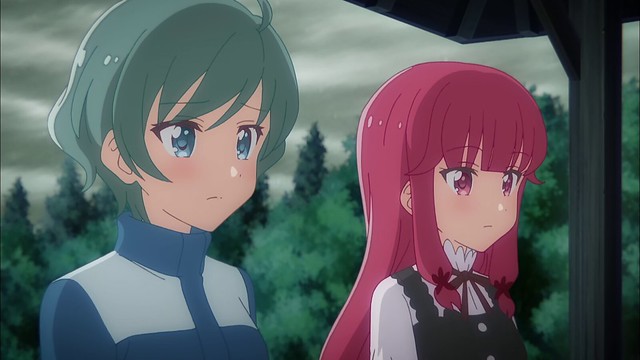 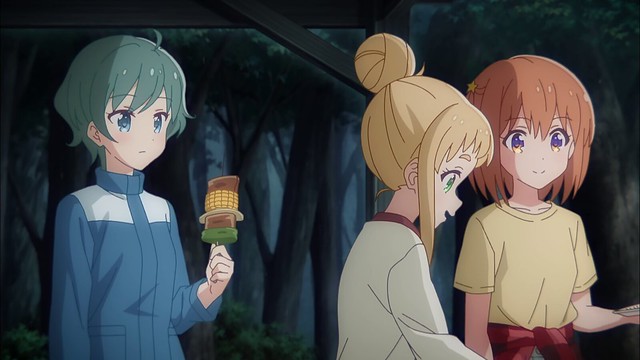 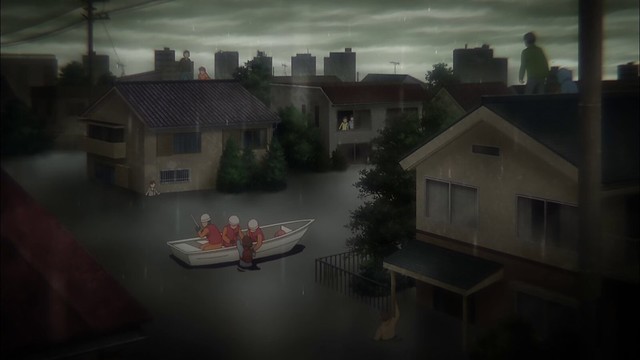 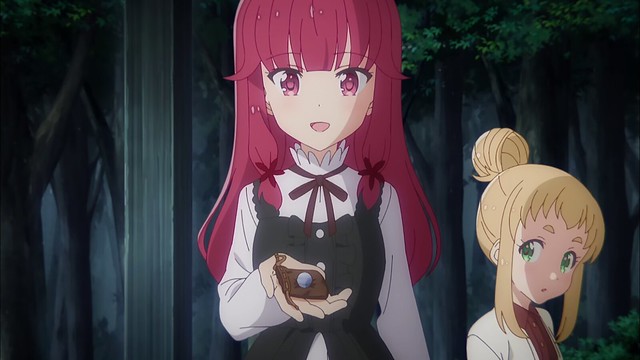 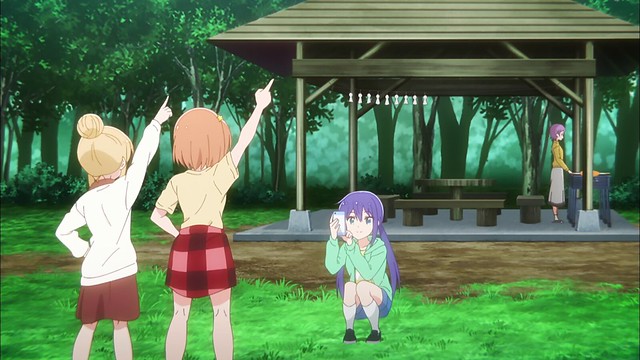 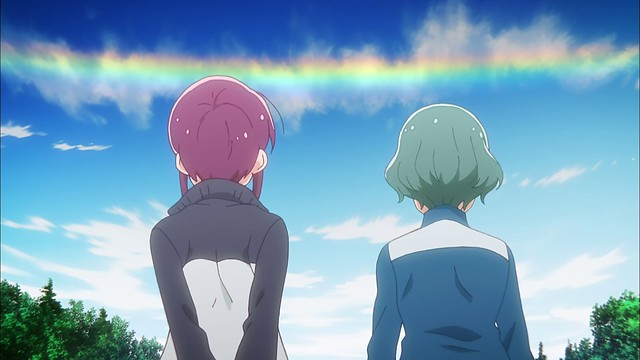 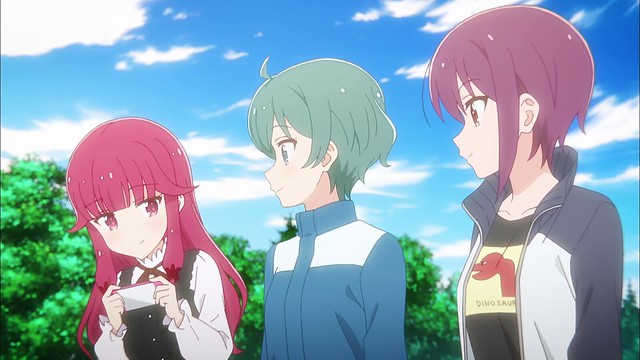 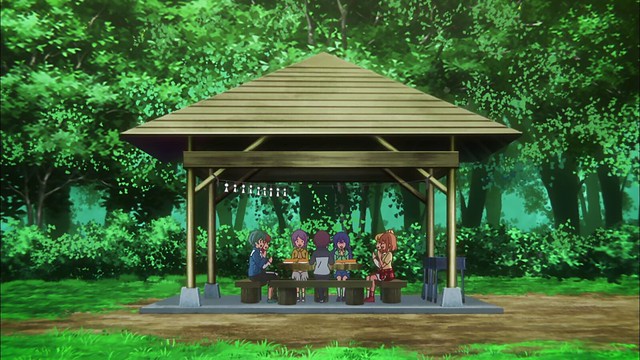 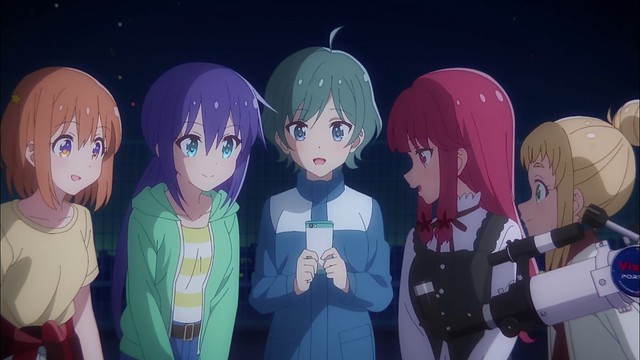 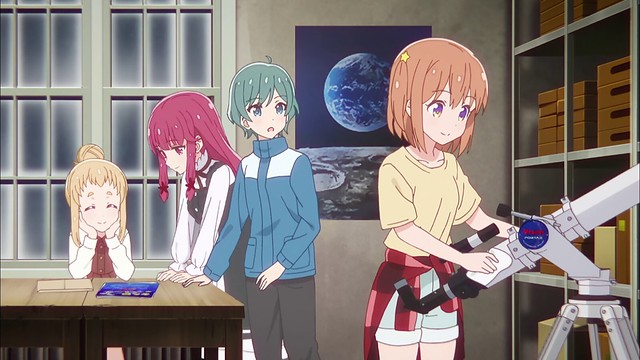 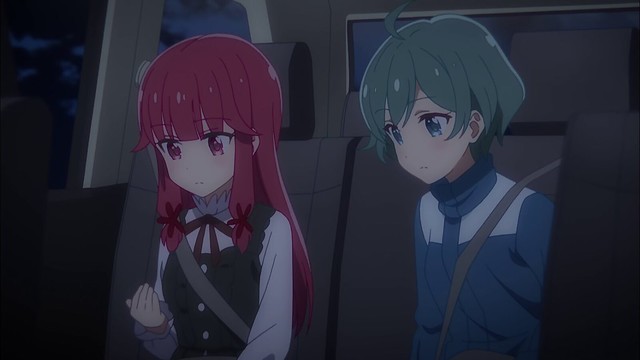 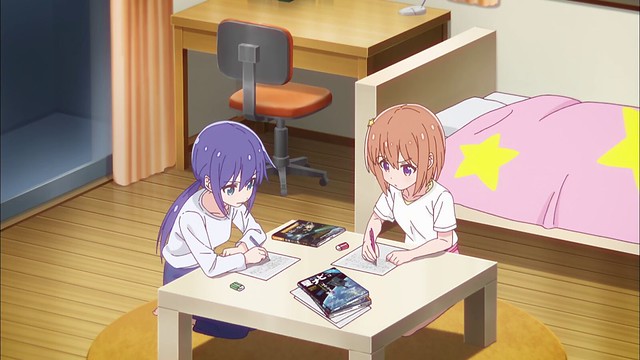 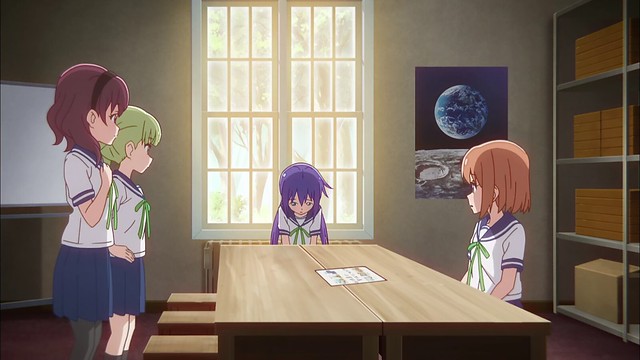 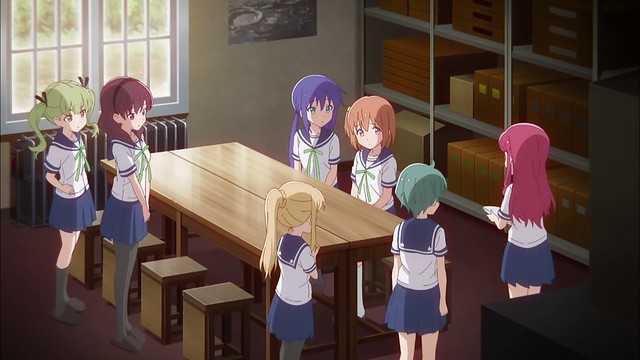 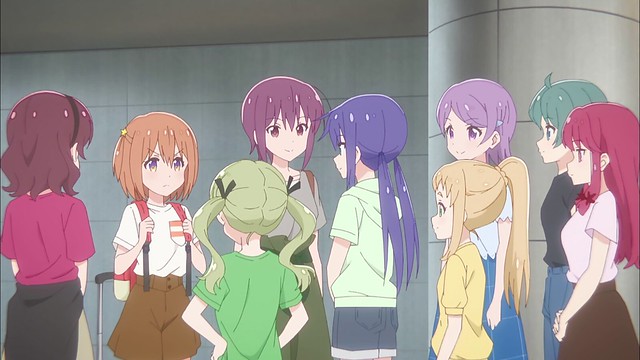 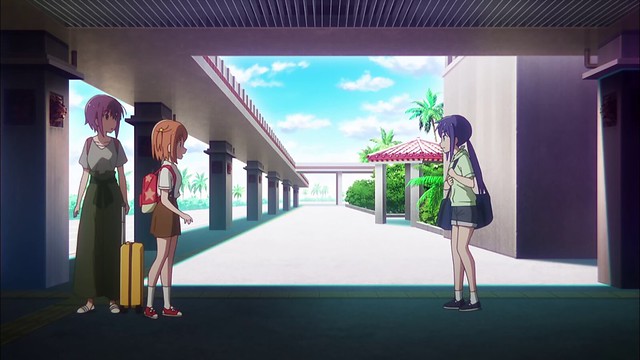 That Koisuru Asteroid‘s final quarter has already prompted me to come back with what is, in effect, a special-topics episodic post speaks volumes to the strength of the series. Far from being unremarkable or dull, Koisuru Asteroid captures the intellectual curiosity and appreciation of teamwork that characterises human achievement, of which the greatest-known would be the 1969’s Apollo 11 mission in which Neil Armstrong and Buzz Aldrin became the first humans to ever walk on another world. While Mira and Ao’s aspirations are not quite to the same scale, they are nonetheless founded on the same intents, to learn more about their world and satisfy their curiosity. The same wonder about the cosmos that drive Ao and Mira to find an asteroid led humanity to build engines that could reach other worlds, and in doing so, learn more about ourselves in an unprecedented capacity. It is this reason that compels me to keenly follow Koisuru Asteroid, and as we advance into the final two episodes, I am very excited to see what awaits Mira and Ao as they make steps towards fulfilling a long-standing promise with one another: the inclusion of two capable and unique juniors in Yū and Chikage only serve to further enhance the series and keep things dynamic, engaging. Given that Koisuru Asteroid has consistently yielded meaningful discussion, a question that I raise for myself is whether or not to take an episodic route for the remainder of the series, especially now that the groundwork for Mira and Ao’s asteroid hunt is laid down.