God’s Blessings on This Wonderful Choker: Review and Reflection on KonoSuba’s First OVA

“Have you acquired creepy, specific old stuff from an antique or thrift store that gives you powers but fucks with you in unforeseeable ways? Bring it to Curse Purge Plus! I use science to un-curse the items for cash, and you get to keep the powers! Don’t pay for cool stuff with your soul. Pay for it with money. You know, like how every other store in the world works?” –Rick Sanchez, Rick and Morty

Kazuma visits Wiz’s shop with the entire party in tow. Here, Megumin runs into Yunyun, her so-called self-proclaimed rival, and the two get into an altercation. Amidst the chaos, Kazuma notices an innocent-looking choker described as being able to fulfil wishes. Wondering if it’ll boost his luck stats, he tries it on, only to learn from Wiz that the choke actually will kill anyone who fails to recall their original wish within four days. Kazuma attempts to recall it and has each of Wiz, Darkness, Megumin and Yunyun do questionable things, feeling his wish might’ve been connected to humiliating them in some way. However, after four days, Kazuma still has not remembered what his wish was. He prepares to die, and admits that having done all that to the others, he feels a sense of serenity. It turns out this was his wish, to have some peace every now and then, and the choker relinquishes its grip on Kazuma. Embarrassed beyond measure, Wiz, Darkness, Megumin, Yunyun and Aqua beat the living daylights out of Kazuma, who finds himself in the respawn point in front of Eris once again. Released three months after the original run ended, KonoSuba‘s first OVA continued in the vein of its predecessor with its humour, and this time, with no imminent adventure or threat to the town of Axel, follows Kazuma’s own misadventures in exploring a side of his personality that was only seen once during the first season proper: Kazuma’s less-than-clean thoughts had not been a point of contention, and his actions towards Darkness in season one’s penultimate episode stemmed from a misunderstanding. However, in KonoSuba‘s OVA, Kazuma’s perversions come out in full force as the OVA’s driver.

In spite of such a crass and callous storyline, KonoSuba makes Kazuma’s mistreatment of Wiz, Darkness, Megumin and Yunyun amusing to watch, while at the same time, foreshadowing the precise relationship between Kazuma and Aqua. After realising his doom is inevitable, Kazuma asks Wiz to act as a lap pillow for him and eventually starts grouping her. Darkness, he has go through punishing exercises, and with Megumin and Yunyun, he decides their challenge will be strip rock-paper-scissors. Aqua, on the other hand, is asked to fetch lunch. While Aqua is convinced that Kazuma will do something questionable to her, she invariably is spared each and every time. In the end, Kazuma apologises to everyone for possessing thoughts of perversion towards them, but for Aqua, he apologises for seeing her as strictly a friend. Thus, what was probably a crude OVA suddenly takes new meaning in providing a bit more insight into how Kazuma sees Aqua: despite their frequent noisy quarrels, Kazuma does hold Aqua in a higher regard than he lets in on. In addition, the OVA also introduces Yunyun to viewers; for now, the most that we’ve seen of Yunyun is that she’s another Crimson Dæmon of the same order as Megumin, that she’s envious of Megumin in some way, and that the animosity is mutual because Megumin is jealous of Yunyun’s figure. These are the OVA’s contribution to KonoSuba: aside from its humour, the OVA also drives character development that would subsequently become more important as viewers enter season two, exploring new facets of the characters to augment their dimensionality. 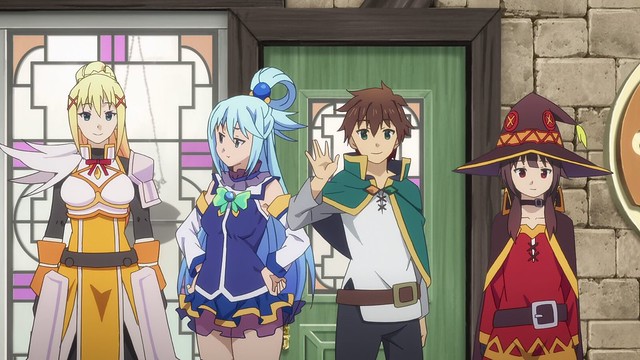 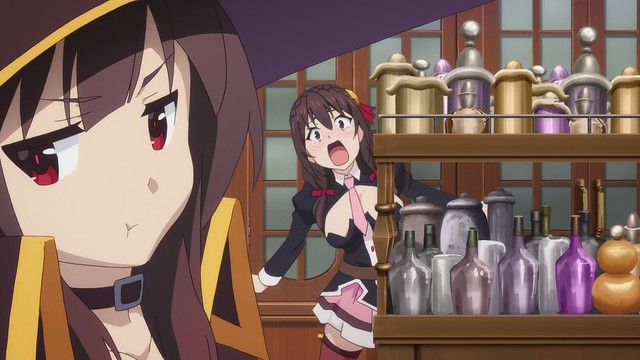 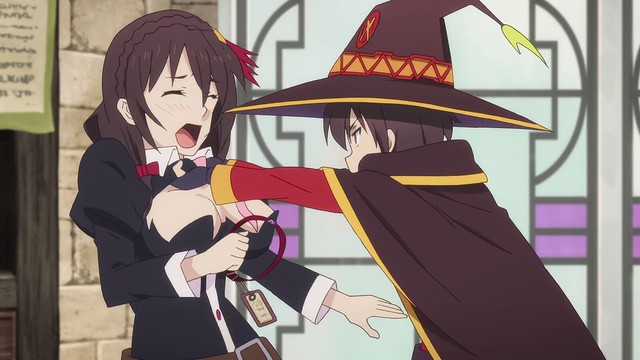 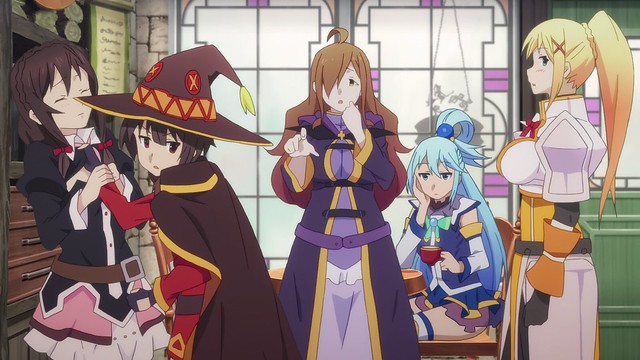 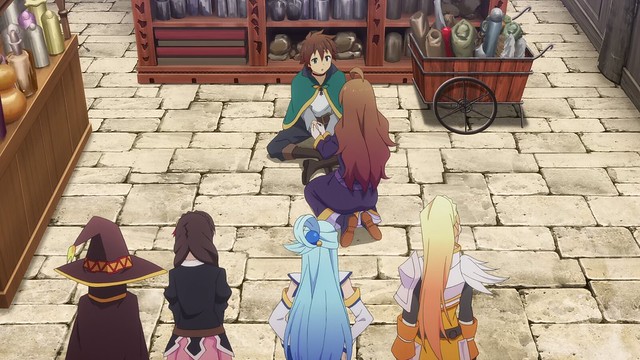 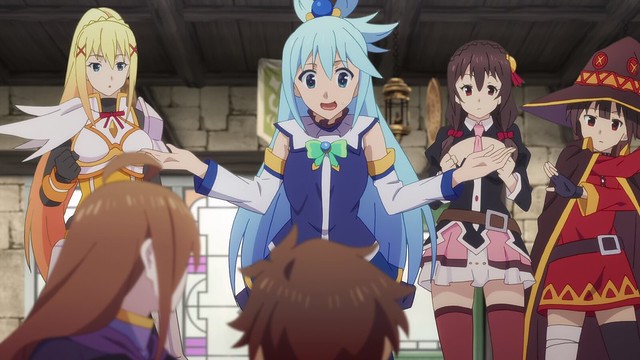 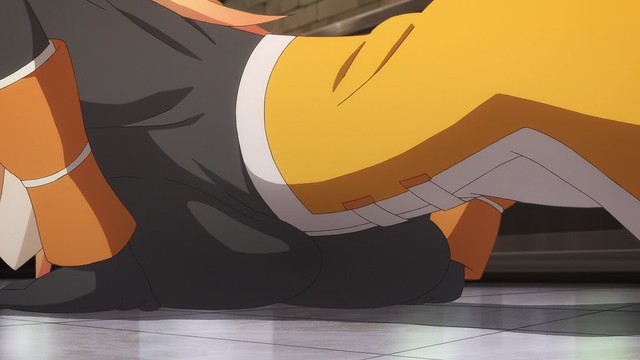 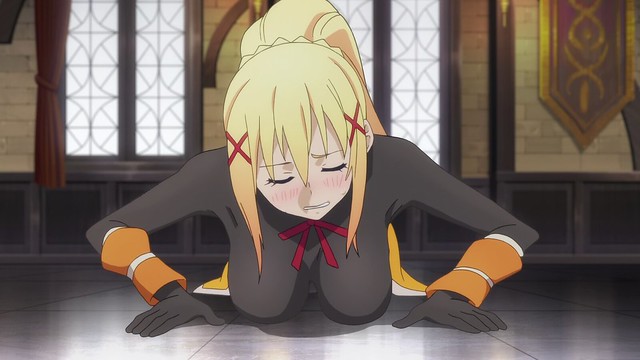 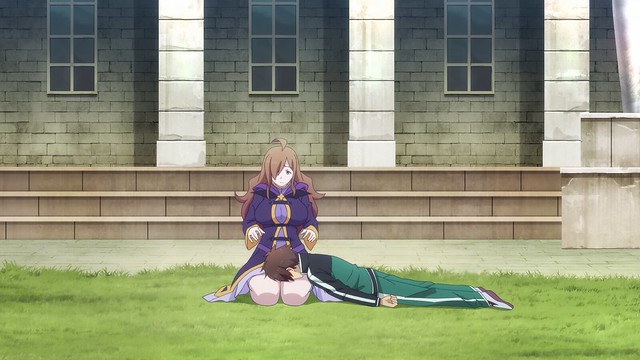 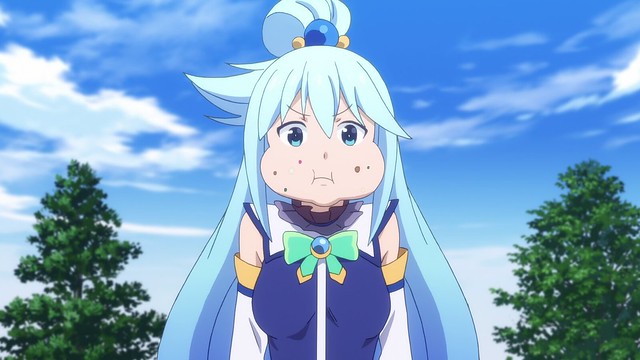 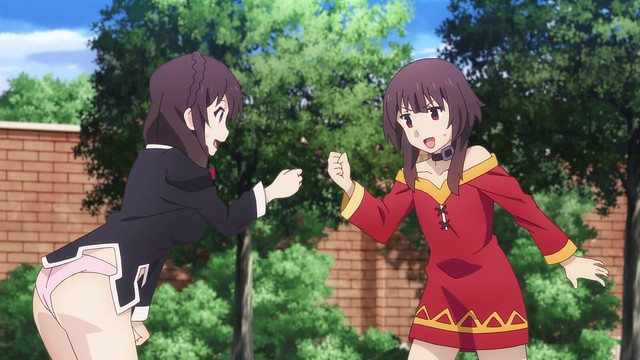 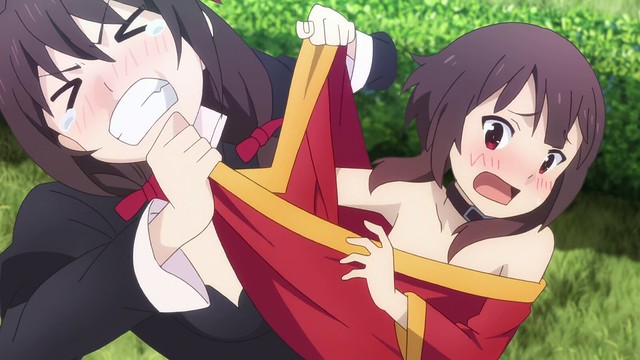 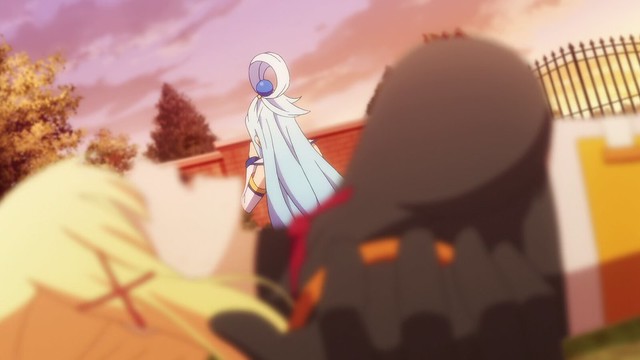 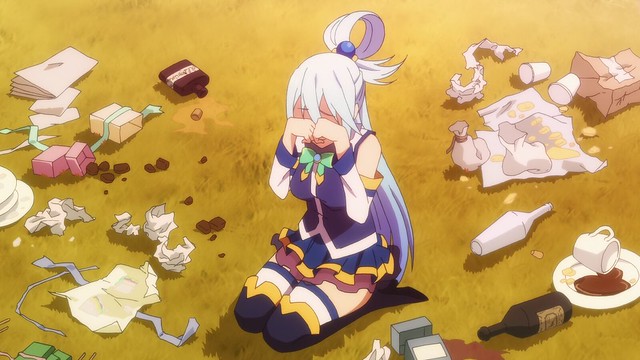 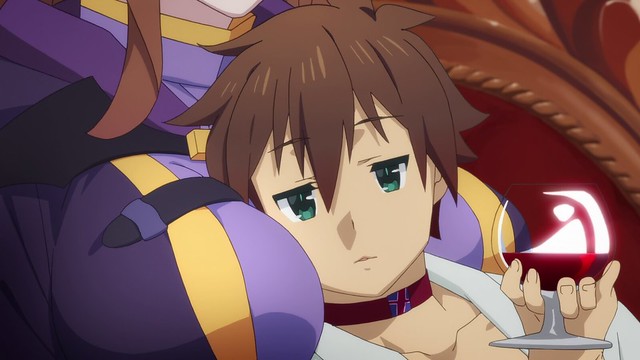 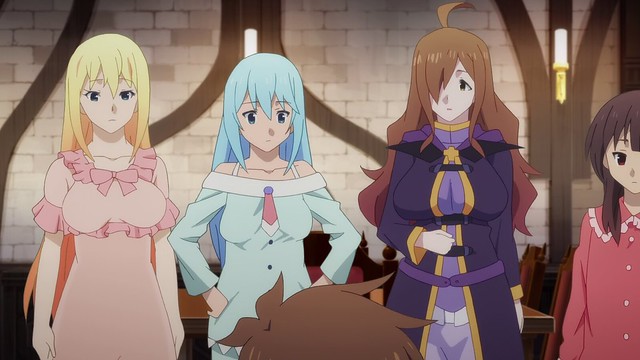 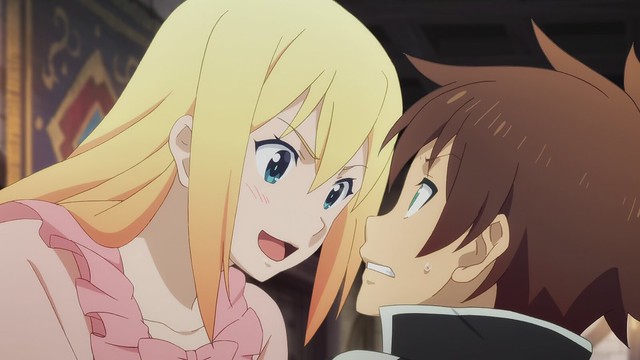 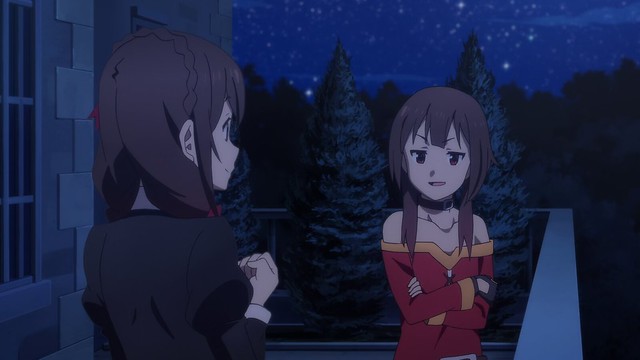 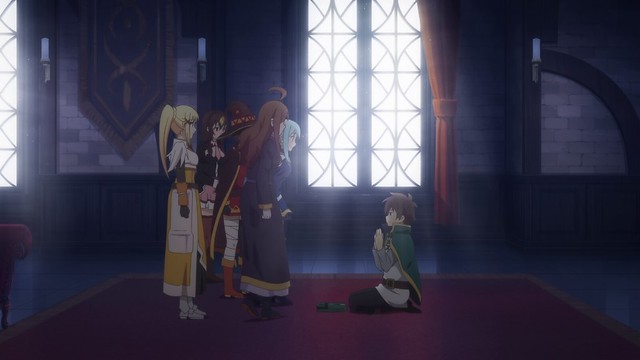 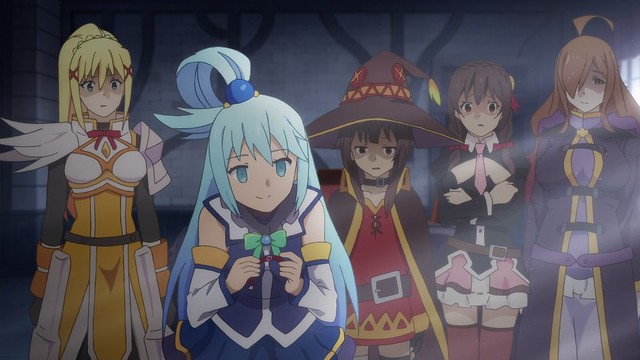 Because guessing when an OVA is set relative to the main series has become something of a frivolous pursuit I’ve taken to doing for OVAs, if I had to guess, I would say that KonoSuba‘s first OVA is set between the eighth and ninth episodes of the first season, after Kazuma finds Wiz’s shop and moves into the mansion, but before Kazuma and his party destroy the Destroyer and Kazuma lands in trouble for being the leader of the party that destroyed an aristocrat’s property. Typically, OVAs set between the events of two episodes, during the course of a series, serve to provide a glimpse at the characters’ daily comings-and-goings outside of the adventures that form a key part of the story. In the case of Kazuma, the first OVA shows him as being a less favourable character than one would like, and the misfortune that befalls him is oftentimes, a consequence of his own actions. However, while it is hard to feel sympathetic for what happens to Kazuma after he spends an entire episode abusing Wiz, Darkness, Megumin and Yunyun, what is known is that since Kazuma and Aqua are central to KonoSuba, I will need to wrap this talk on KonoSuba‘s first OVA pronto and get on watching the second season, which begins where the first season left off.

5 responses to “God’s Blessings on This Wonderful Choker: Review and Reflection on KonoSuba’s First OVA”