“Many men go fishing all of their lives without knowing that it is not fish they are after.” –Henry David Thoreau

After moving to a small coastal town, Hina Tsurugi had looked forwards to the start of high school and planned to join a handcrafting club, which is her hobby. While out to pick up a few things, Hina notices a girl swaying about on the breakwater. She rushes off to help, fearing the girl has heatstroke, but trips in the process. The girl introduces herself as Yūki Kuroiwa and explains that she’d been looking for marine life underneath the waves. Her fishing reel had also been tangled, and she was struggling to untangle it; thanks to Hina’s experience with knots, she straightens things out. Impressed, Yūki invites Hina to try fishing out, and Hina ends up pulling an octopus out of the water. She agrees to join the Breakwater Club on condition that Yūki removes the octopus from her sight, and when school starts, she decides to rescind her application. However, when classes end, the Breakwater Club’s headquarters is empty, and only one other girl is seen: this is Natsumi Hodaka, whom Hina had once been neighbours with. Soon after, Yūki arrives with one other club member, Makoto Ōno. When they hear of Hina’s wish to join another club, they ask her to give fishing one more shot before making a decision. With Natsumi’s help, Hina begins fishing for Japanese Horse Mackerel fry, and learns that with their fishing rods, can catch several at a time. Makoto ends up using a portable stove to fry these fish, and Hina is amazed at how well it tastes, although when she makes to clean up and finds the container for bait filled with insects, she panics. This is Houkago Teibou Nisshi (“After-school Embankment Journal”, English title Diary of our days at the Breakwater) after one episode, which is this season’s easygoing slice-of-life series that follows Hina and her journey into the world of fishing.

In dealing with fishing, an activity that requires skill, equipment and patience to enjoy, and a profession that is demanding and dangerous on those who are employed in it, Houkago Teibou Nisshi approaches fishing from a completely different angle, being more of a laid-back activity that allows one to appreciate the oceans and its bounty. Thematic elements will present themselves as Houkago Teibou Nisshi continues, but immediately, the anime wastes no time in establishing its intentions through its settings and atmosphere. Hina’s new home in the seaside town is a quiet, relaxing place with a beautiful view of the ocean and endless skies that invite exploration. The incidental music captures the languid, peaceful tenour of the town; in spite of Hina’s entomophobia, the seaside town is ultimately a peaceful place that will allow Hina to grow and make discoveries at her own pace. The slow pacing Houkago Teibou Nisshi conveys means that for viewers, the intricacies and nuances of fishing will also be presented in a way as to ensure viewers can follow along; Hina is the stand-in for the viewer, and the explanations of different techniques and equipment will help viewers to follow along as Hina learns more about the activity that she’s compelled to pick up now. Unlike last season’s Koisuru Asteroid, where I had prior background in both astronomy and geology to follow along, fishing is something that I am not versed in, and so, it will be interesting to see how Houkago Teibou Nisshi presents fishing to viewers. 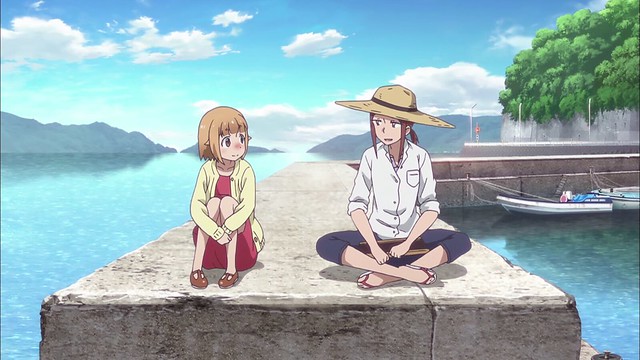 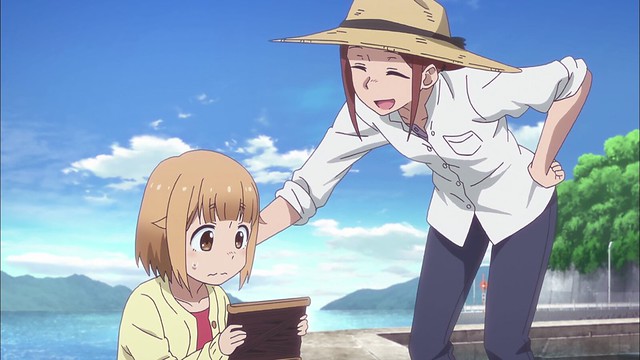 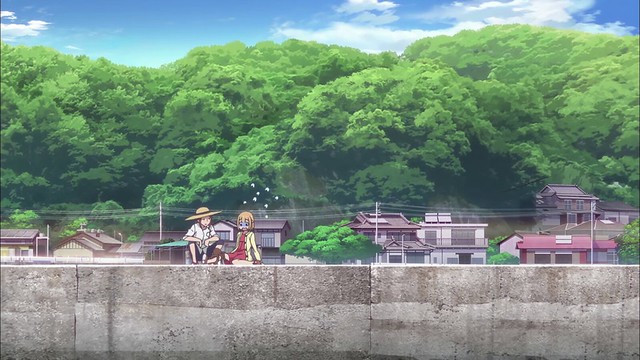 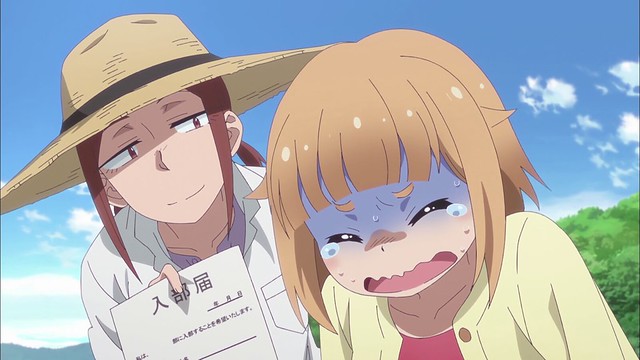 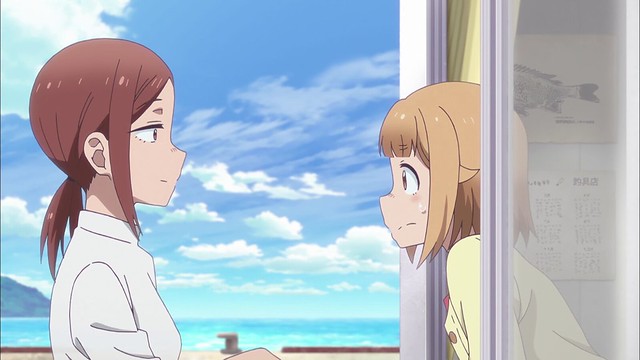 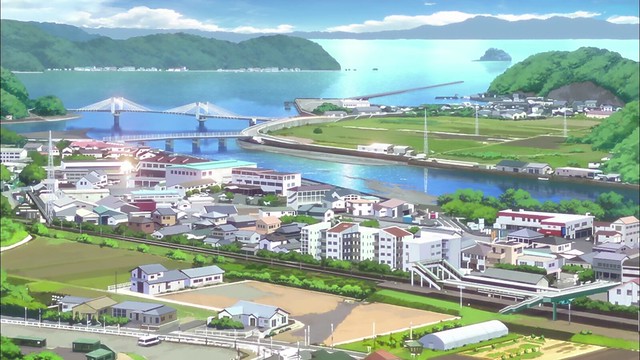 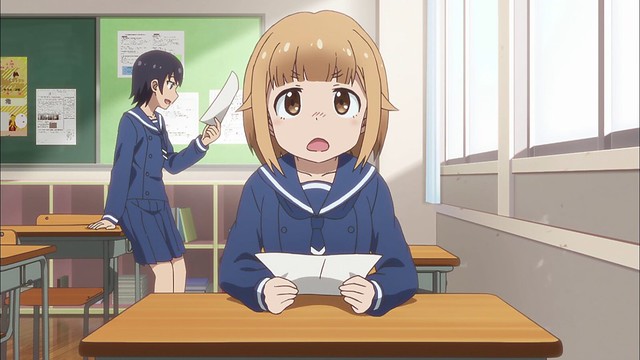 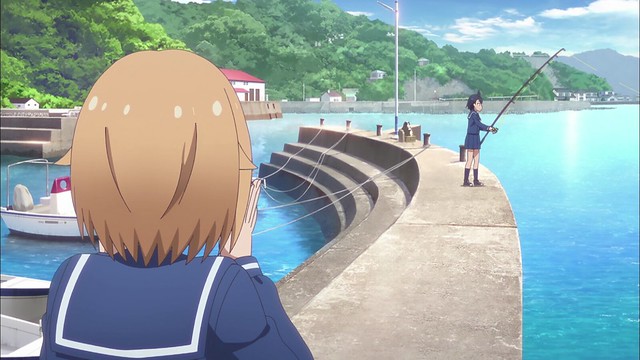 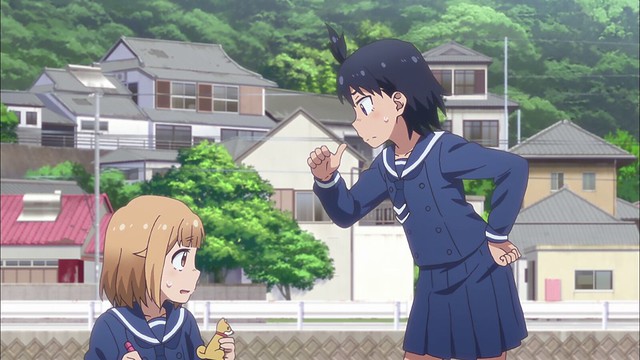 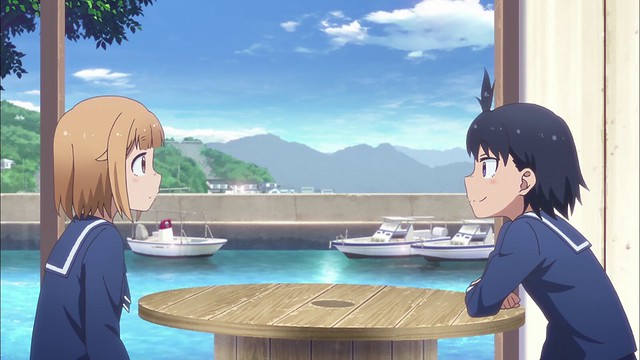 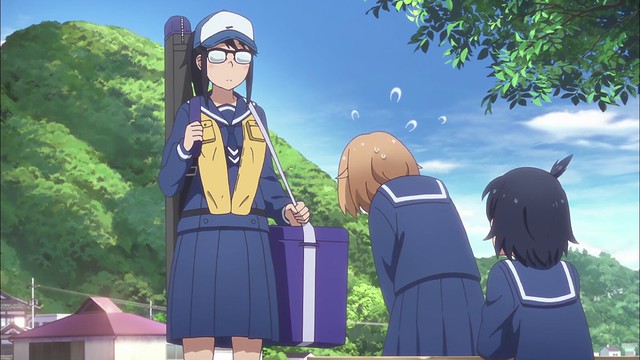 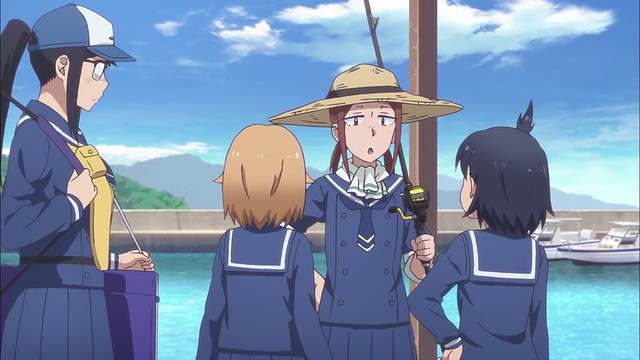 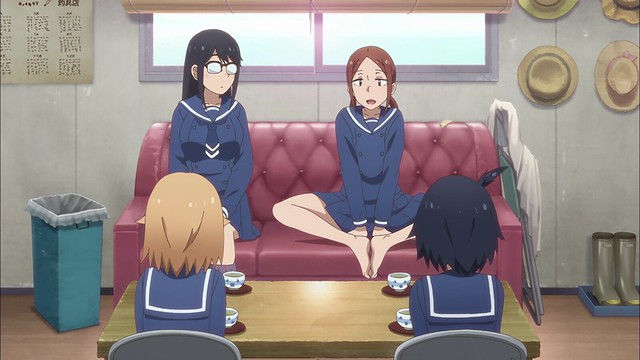 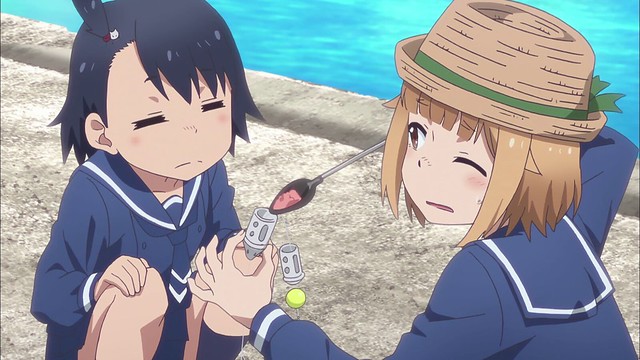 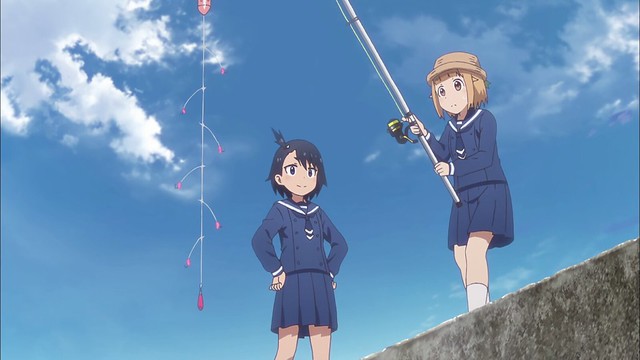 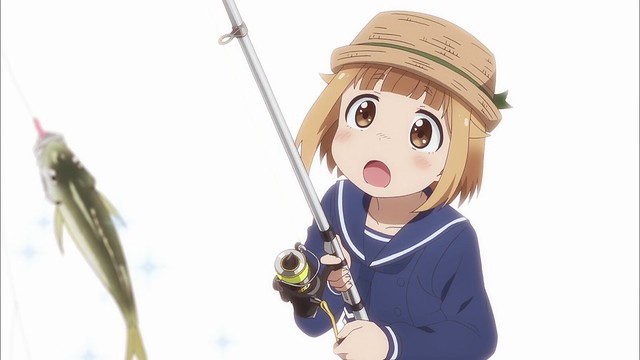 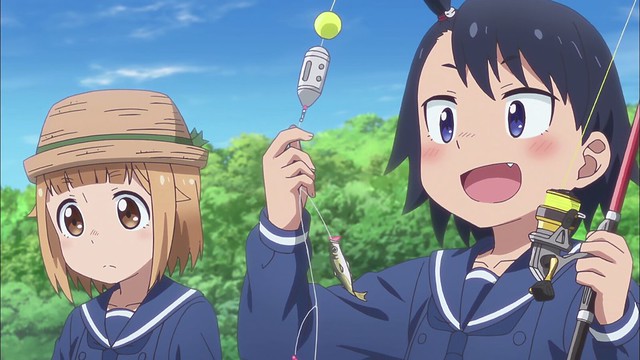 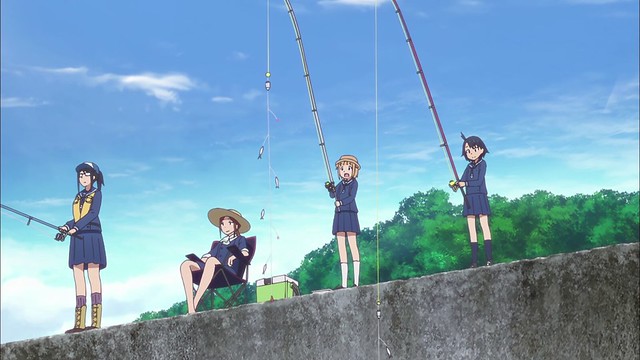 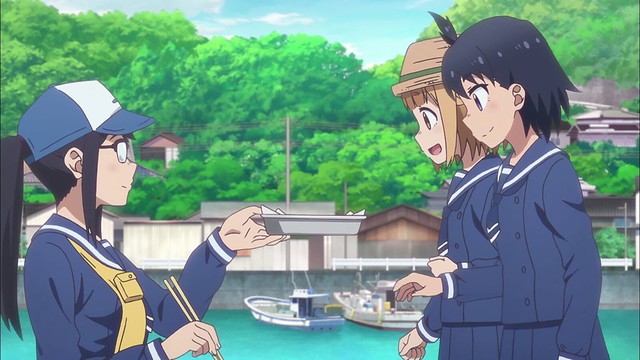 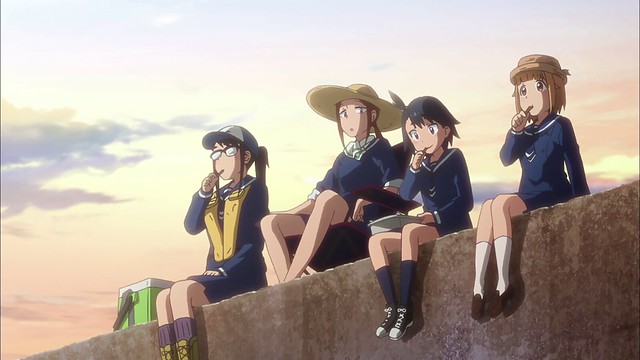 While I possess no background in fishing, Houkago Teibou Nisshi is immediately captivating owing to a combination of its atmospherics and characters: with a beautifully-depicted town that has a warm, summer feeling to it that stands in stark contrast with the miserable remnants of winter still periodically afflicting this side of the world, Houkago Teibou Nisshi conveys a sense of warmth and vibrance. In conjunction with a lively cast of characters, each with their own unique traits and likeable in their own fashion, Houkago Teibou Nisshi is off to the right foot – I am excited to see what experiences and new discoveries await the indoors-oriented Hina, who admittedly resembles Yama no Susume’s Aoi Yukimura. In Yama no Susume, Aoi reunites with the energetic and outdoors-oriented Hinata Kuraue, and here in Houkago Teibou Nisshi, Natsumi fulfils that role, being the loud and boisterous friend who enjoys the outdoors. With familiar characters given a new setting, Houkago Teibou Nisshi has the opportunity to portray the joys of fishing to folks like myself, who’ve never caught a fish previously, much less picked up a fishing rod, and with this in mind, I am looking forwards to seeing how this series plays out.