Houkago Teibou Nisshi: Review and Reflections After Three, Intermission at the First Quarter

“Fishing is boring, unless you catch an actual fish, and then it is disgusting.” –Dave Barry

Hina’s parents are surprised to learn that she’s joined the Breakwater Club, but her father mentions that the club’s been around since his time as a student. The next day, Hina is exhausted by PE class and barely makes it to the Breakwater Club’s clubroom. Here, they find Yūki lounging around: it turns out there’s a pile of reels that need untangling, and Hina demonstrates proficiency at untangling them. Natsumi then helps Hina clean up the reels’ interior and get them ready for use. Makoto arrives, reprimands Yūki for having delegated a task to Hina and Natsumi when she should’ve done it herself, and the girls then head out to practise casting. Hina inadvertently hits Natsumi a few times too many, but with the proper implements and some tips from Yūki, she manages to get the gist of casting. The girls later begin to fish for flathead: Hina learns how to set up soft lures on a hook and the technique for moving the lure to attract larger fish. Despite her fear of larger fish, and reeling in detritus from the ocean floor, Hina persists, eventually catching an impressive flathead. Yūki sets the task of killing and cleaning the flathead to Hina, saying that one must see the entire process through. Hina’s fear gets the better of her, so Makoto ends up preparing the fish for dinner. Hina finds freshly-caught fish doubly delicious for the fact that she’d caught it herself, although she still faints when Makoto offers her the flathead’s head to enjoy. This is about as far as we’re going into Houkago Teibou Nisshi for the present: on account of the current world health crisis, production has been indefinitely suspended and will resume once the outbreak is contained.

Continuing on in Hina’s journey into the Breakwater Club and fishing, Houkago Teibou Nisshi establishes that the series is going to be more than just having a line in the water: the entire process of fishing, from learning the right technique for casting and properly maintaining one’s equipment, to the duty of killing and preparing a fish for consumption, will be portrayed. Houkago Teibou Nisshi thus begins to show the importance of experiencing something in its entirety in order to appreciate the things around us, and now that an overview of fishing has been presented, with other members of the Breakwater Club stepping in to help Hina out and illustrate the processes at a coarse granularity, it follows that as Houkago Teibou Nisshi continues, Hina will be eased into things more gently to ensure she both understands what she’s doing, as well as acclimatise to things that she might consider frightening. Over time, these experiences will doubtlessly help Hina in several areas, most notably, her fear of insects and her comparatively poor physical condition. Of course, it is still early to be determining what themes and messages Houkago Teibour Nisshi has in store for viewers, but if the first quarter is indicative of what’s upcoming, then viewers can be reasonably assured of a series whose message is about the importance of the journey, with Hina’s experiences in fishing at its core. 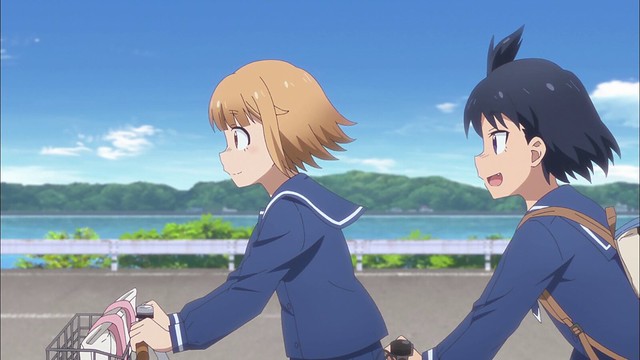 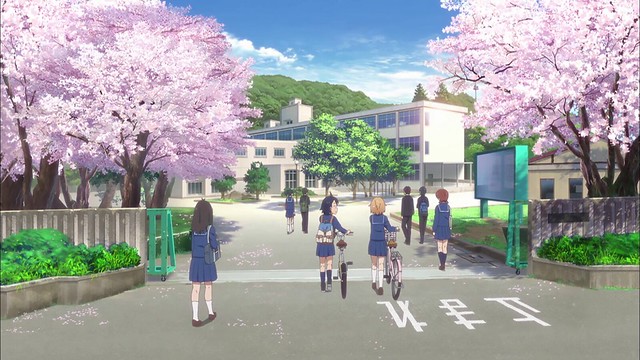 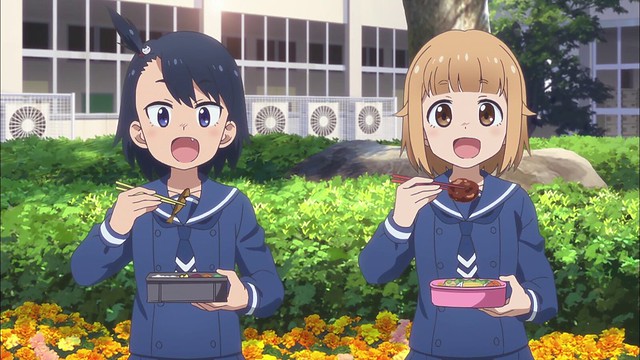 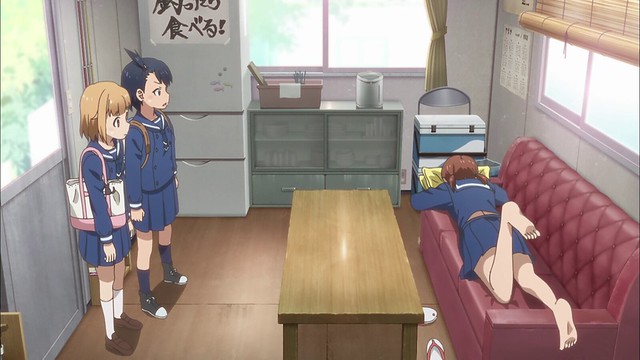 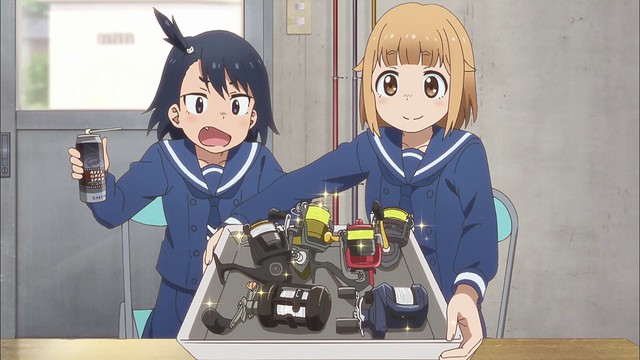 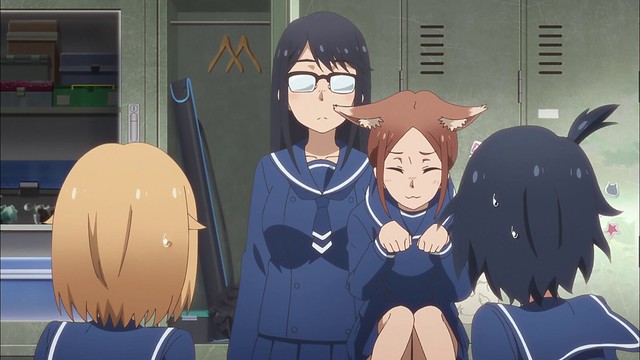 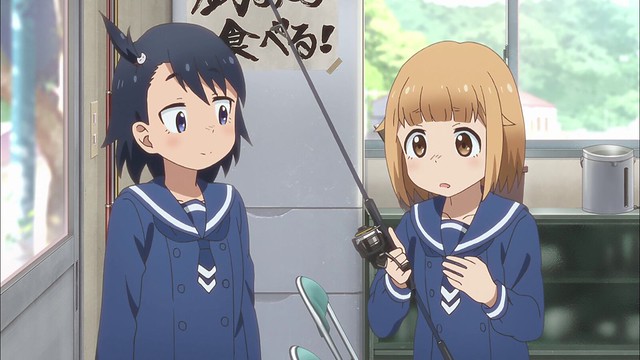 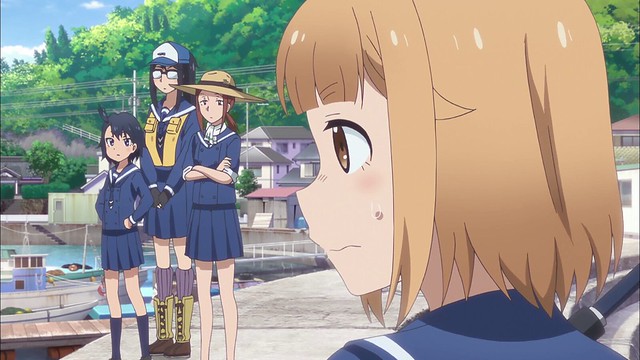 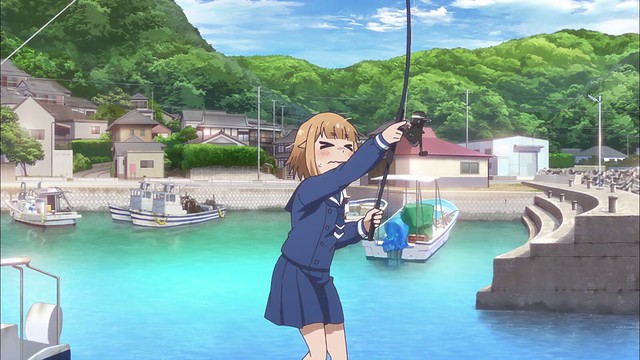 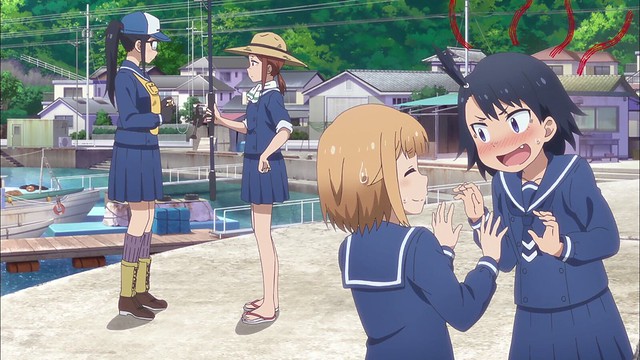 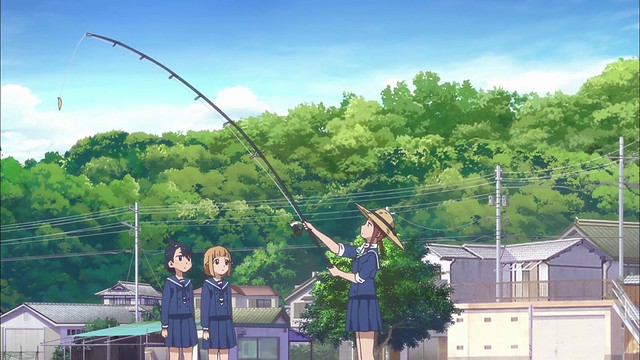 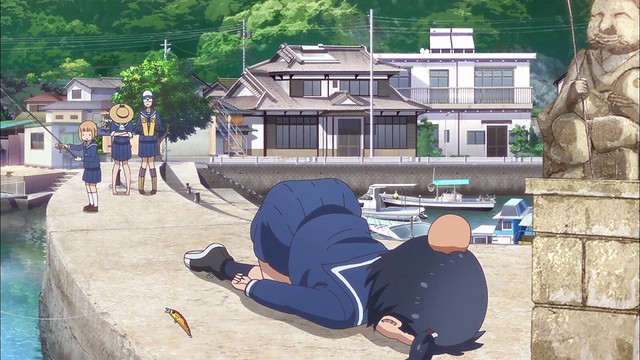 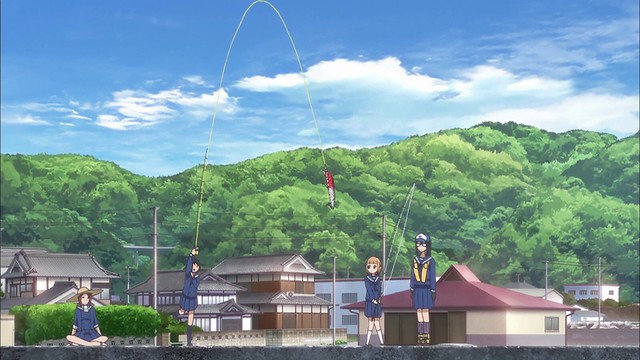 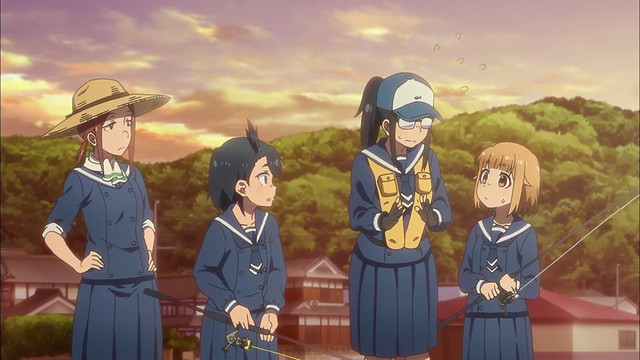 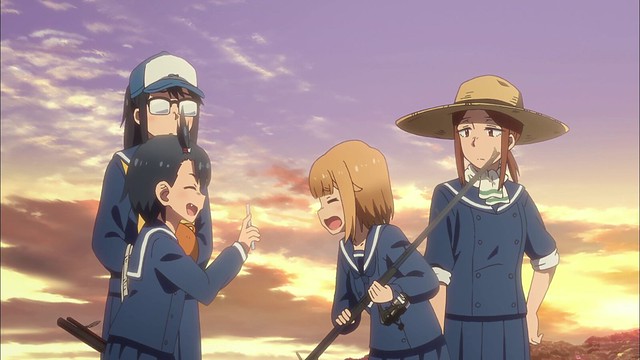 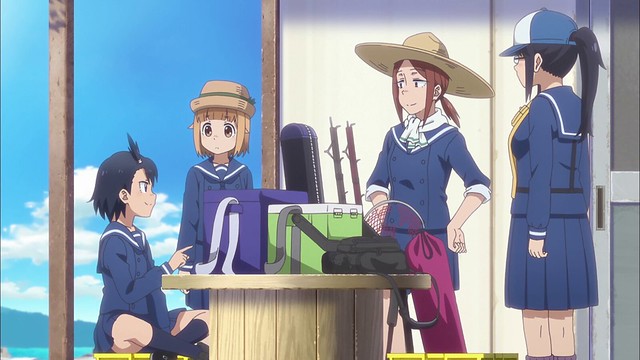 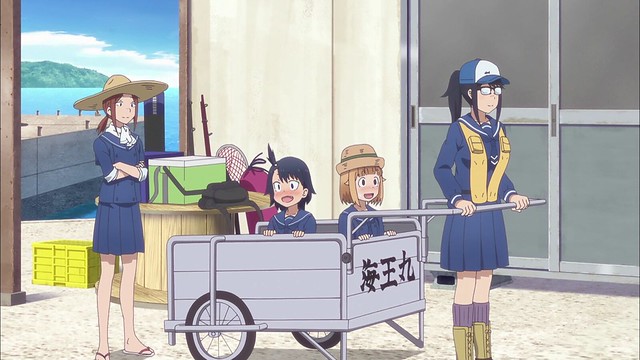 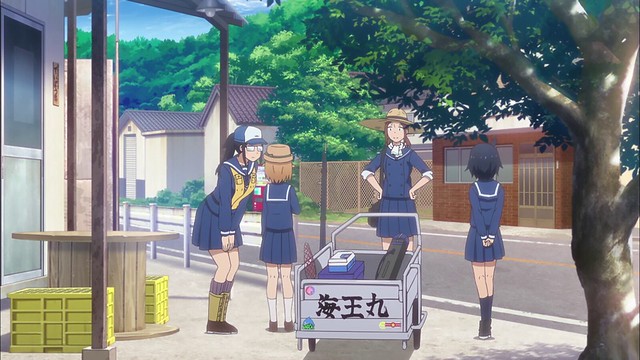 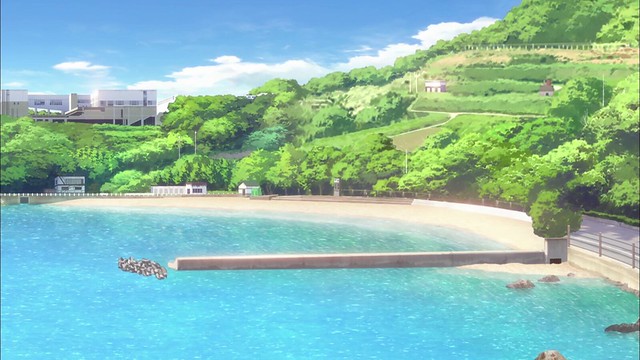 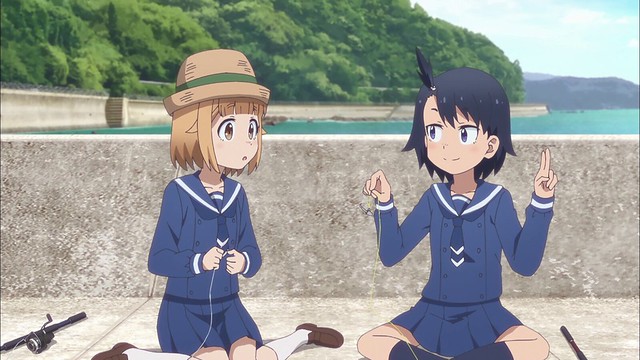 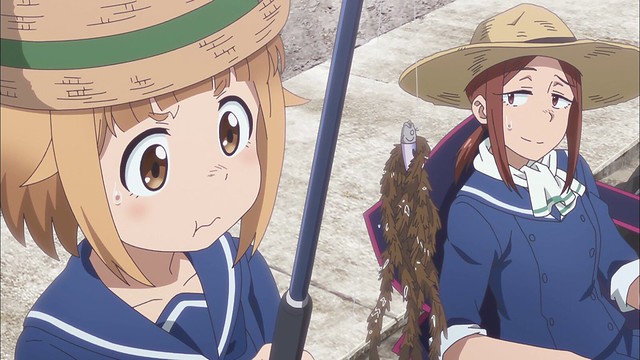 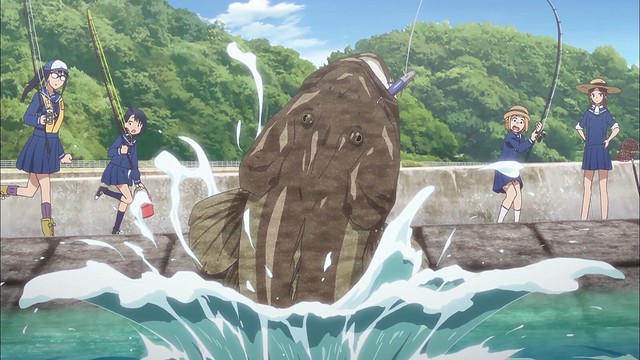 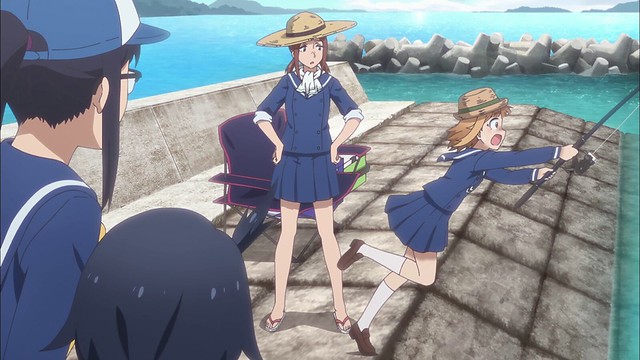 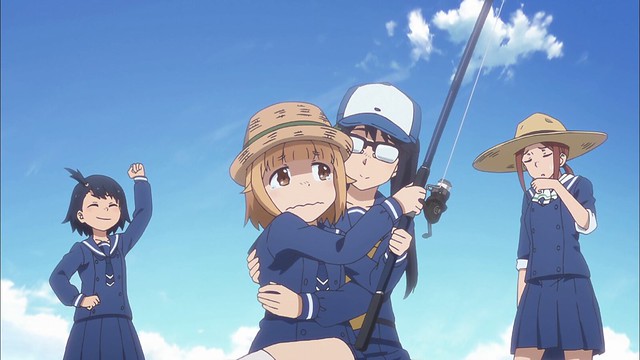 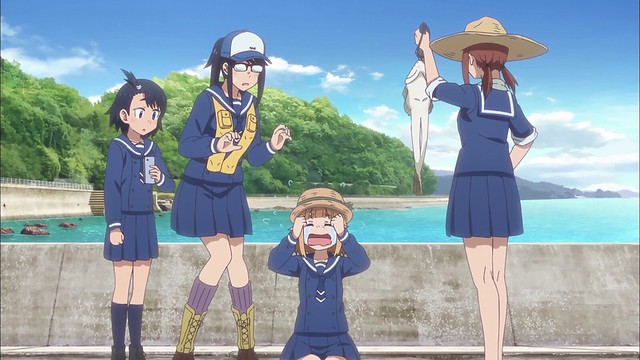 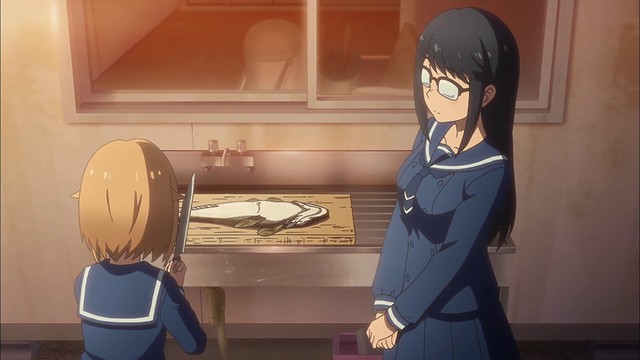 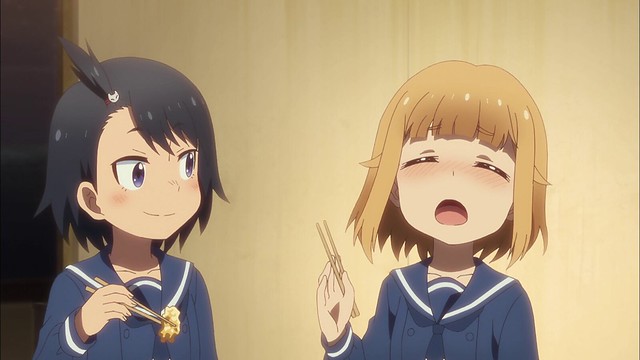 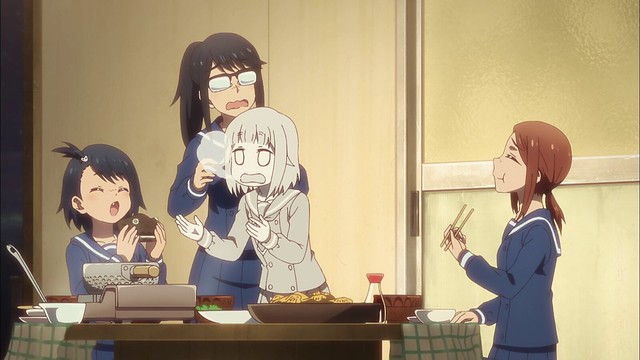 A quarter of the way into Houkago Teibou Nisshi, it becomes apparent that this the season’s premiere anime for relaxing: with its laid-back portrayal of the nuances of fishing, beautiful scenery and a wonderful soundtrack, Houkago Teibou Nisshi excels in helping viewers to slow down and smell the roses: it’s a story of self-discovery and also helps viewers to appreciate the sort of work that professional fishermen do. While fishing is a pastime for some, for most, our seafood is caught at a commercial scale by professionals, and for the most part, all that we need to do is prepare the fish in a manner of our choosing. As such, Houkago Teibou Nisshi reminds viewers that behind every fish is a story, where appreciation of this story helps us to become closer with the foods that we enjoy. This is about as far as I can go with Houkago Teibou Nisshi for the present – the series is on hiatus until the current pandemic begins to recede, and for now, it’ll be a waiting game. The delay of anime is the latest instance of just how far-reaching and damaging the coronavirus outbreak has been, and in times like these, adhering to recommendations from health experts and maintaining physical distance is advised if one seeks a swifter return to normalcy. I will be returning to talk about Houkago Teibou Nisshi in all my usual fervour once the time is appropriate to do so, and in the meantime, I hope that my readers are keeping healthy and safe.