Defense and Multi-Agent Reinforcement Learning in Bofuri: A Whole-series Review and Recommendation

“Yeah. It takes us a while to get any traction, I’ll give you that one. But let’s do a head count, here: an invincible shield maiden, a lightning-fast swashbuckler, an elegant samurai, some dude who’d died and came back a thousand times, a master crafter, a genius mage with stunning puzzle solving skills, and two hammer-wielding brawlers. And you, big fella, you’ve managed to piss off every single one of them.”

“That was the plan.”

“Not a great plan. When they come, and they will, they’ll come for you.”

–Tony Stark and Loki, The Avengers

Kaede Honjō is a high school student who is introduced to New World Online (NWO), a VRMMORPG, on a recommendation from her best friend, Risa Shiramine. While an absolute novice in games, Kaede spins up her character, Maple, and begins exploring the world. Because she fears sustaining damage, Maple invests all of her skill points into vitality, and while her build initially appears ill-suited for NWO, she begins exploring uncommon ways of making things work. After Risa passes her exams, she joins Maple as Sally and decides to specialise in a swashbuckler class that maximises agility. During the course of exploring NWO, Maple and Sally participate in several events that bolster their infamy, and they create Maple Tree, a guild of a similarly eclectic members that Maple and Sally had met in their adventures, each with their own unique skill sets and roles. Word of Maple’s guild results in a highly spirited guild-based event, and in the aftermath, celebrate a time well-spent with their new-found friends from rival guilds. The game’s administrators, having long been concerned with Maple’s ascent, decide to leave her be, since she’s become a powerful advertising tool for the game, encouraging players to pick NWO up to either team up with her and explore, or otherwise power-level with the hope of besting her in PvP one day. This is Bofuri: I Don’t Want to Get Hurt, so I’ll Max Out My Defense (Japanese title Itai no wa Iya nano de Bōgyoryoku ni Kyokufuri Shitai to Omoimasu, Bofuri for brevity), an anime from the Winter 2020 season that has its origins as a series of stories posted to Shōsetsuka ni Narō in 2016 and published as a proper light novel in September 2017. Bofuri‘s success comes from its unorthodox execution; the very things that makes Maple successful as a player makes the anime successful as a series, and much as how Maple combines common techniques in curious ways to form her playstyle, Bofuri draws inspiration from Sword Art Online (VR elements), KonoSuba (humour resulting from in-game elements) and even Manga Time Kirara works (an adorable protagonist with a naive but well-intentioned view of the world) to create something that is uniquely enjoyable.

Maple’s experiences in Bofuri with optimising for defense at the expense of every other statistic was naively motivated by a very simple desire: to not die during gameplay while exploring NWO. Because she’s going in completely unaware of optimal builds, Maple tends to play things by the ear and use the skills she acquires to fill deficiencies in her build. In this way, Maple’s experiences can be considered a form of multi-agent reinforcement learning, where agents (Maple and the other players) act in a way to maximise some sort of reward (in-game currency, gear items, event rewards) and act against some sort of loss function (for Maple, “I don’t want to get hurt”). In practise, any sort of machine learning has the potential of yielding unusual results: during one study, in which a system was assigned to build a navy for engaging an enemy navy using a finite pool of resources, the two most successful results came from extremities. One solution involved deploying a vast fleet of suicide vessels to overwhelm the enemy fleet, while the other solution resulted in the creation of a single large, unsinkable ship that then proceeded to trivially eliminate other vessels from the enemy navy without fear of being sunk. While such cases usually only arise in highly abstracted systems (the parameters never specified whether the ships needed to survive, so the algorithm simply cared about achieving a victory state as quickly as possible), they also demonstrate that edge cases in a model shouldn’t be taken lightly. In Bofuri, NWO’s developers quickly realise this: despite being counter-intuitive to other players (Sally remarks that most players spec out a range of attributes, rather than just vitality), Maple’s play-style and with NWO’s unusual progression system, creates an emergent result where Maple becomes a living god in the game world from a consequence of making choices and decisions that more seasoned players would not make. Consequently, Bofuri becomes a wonderful and engaging (if highly simplified) representation of how unintuitive decisions can still provide optimal solutions in some systems. Of course, Bofuri is more than just a glorified introduction to the unusual outcomes resulting from multi-agent reinforcement learning, and the series’ theme is forward enough: there are many ways to have fun, and creativity can result in some unexpected, but entertaining results. 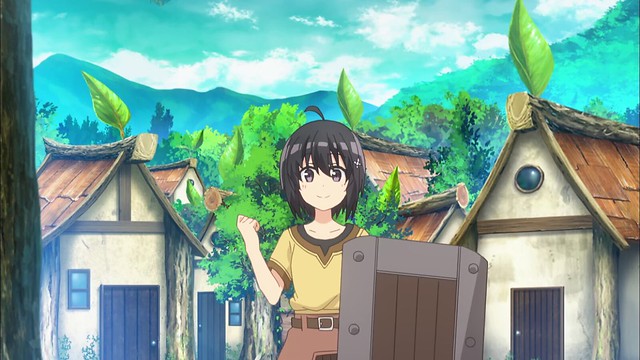 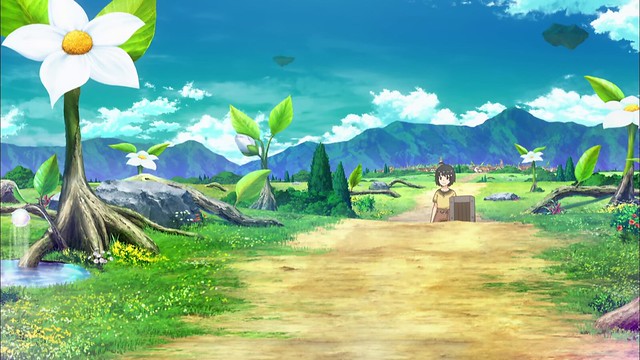 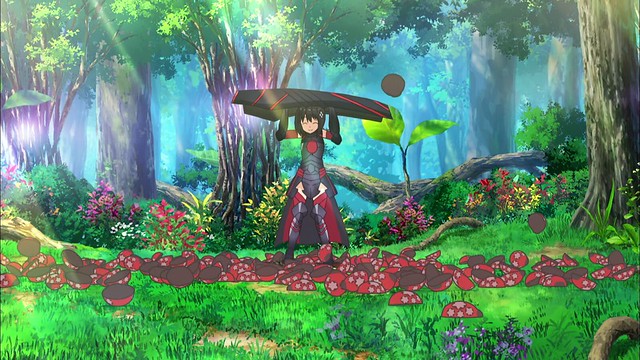 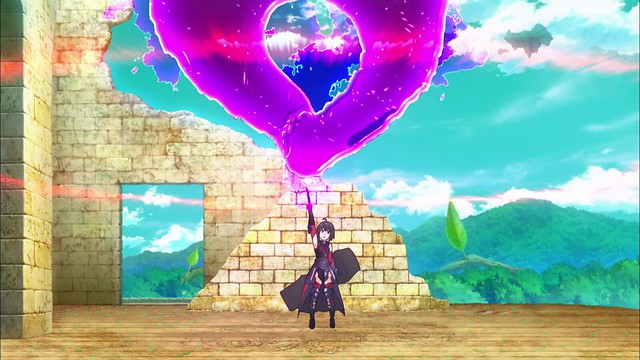 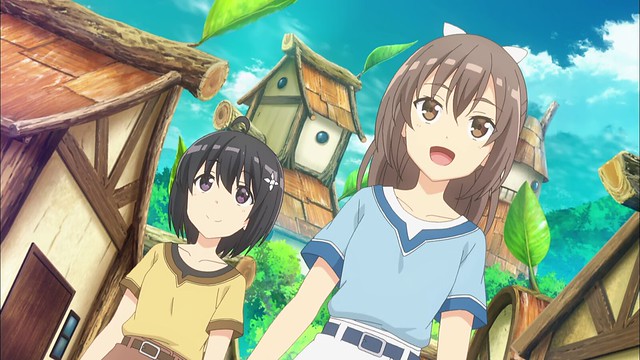 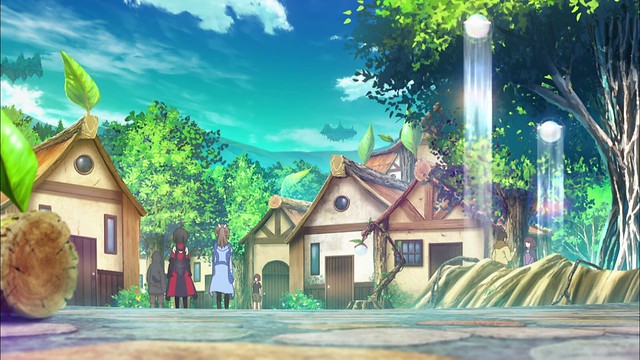 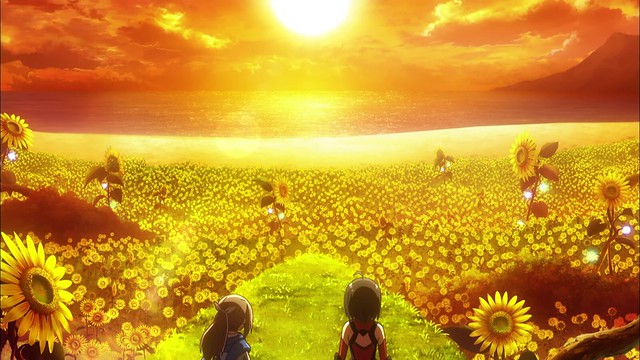 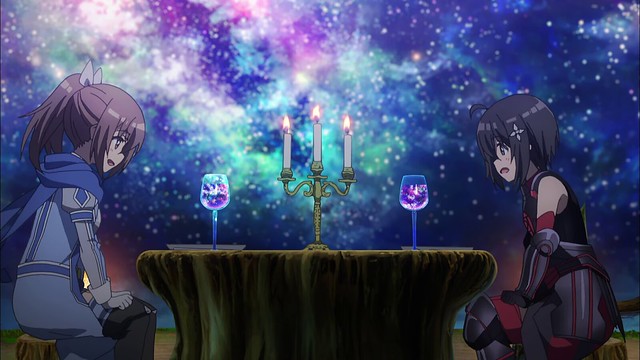 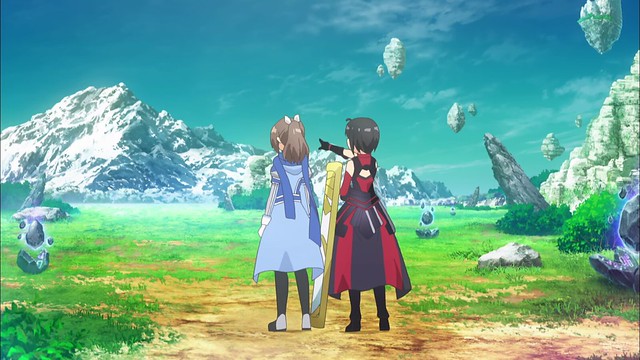 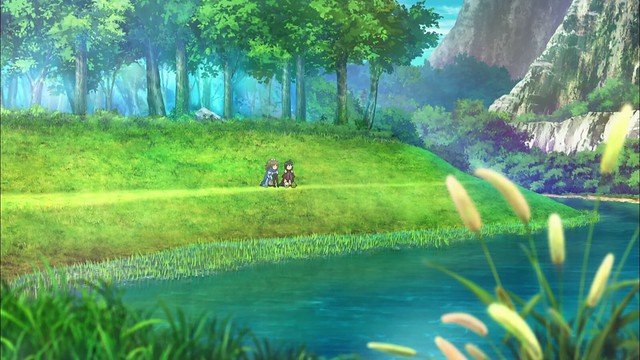 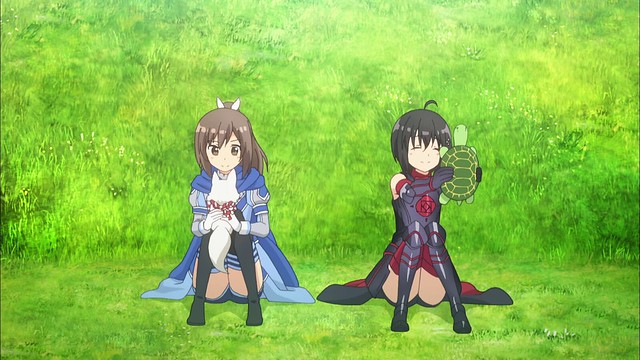 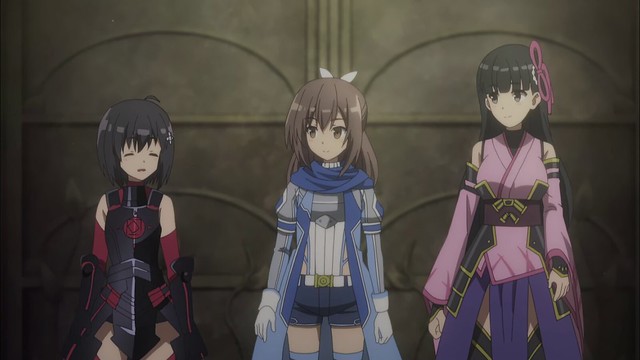 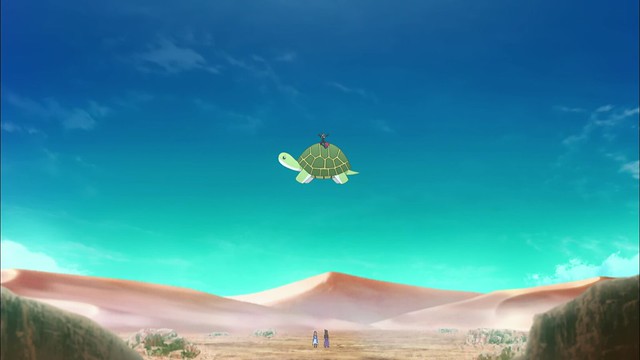 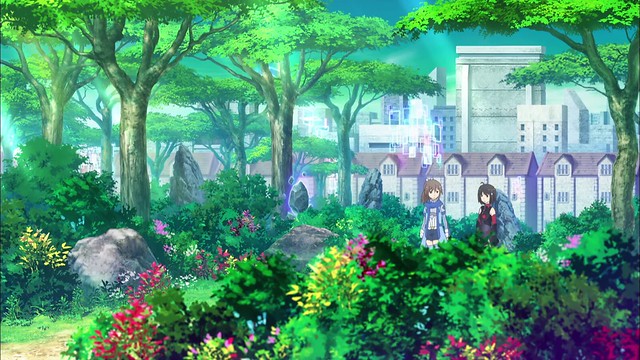 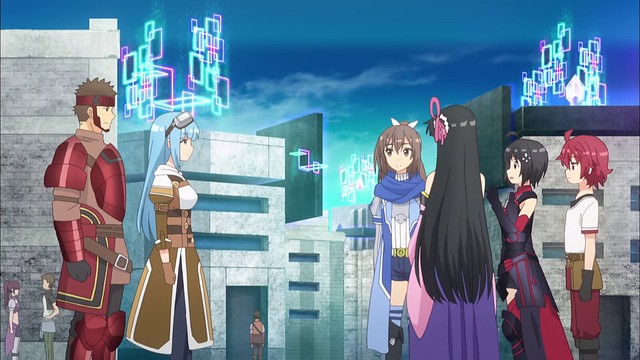 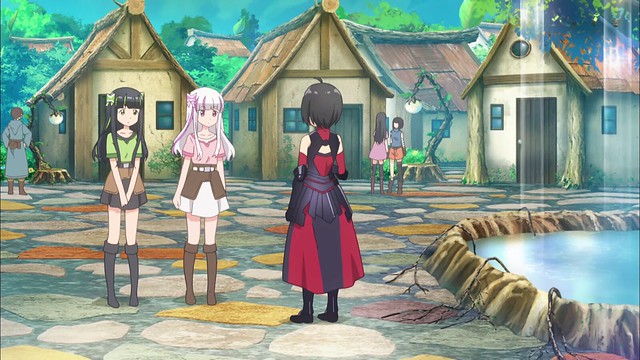 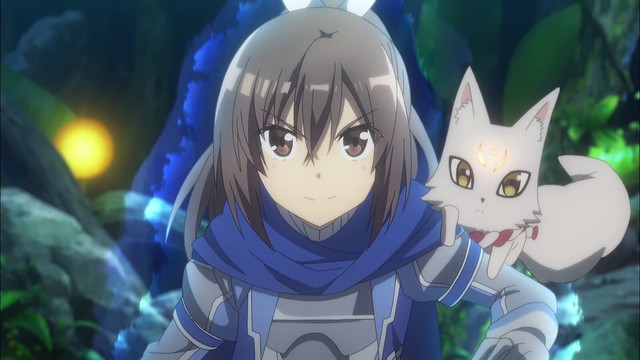 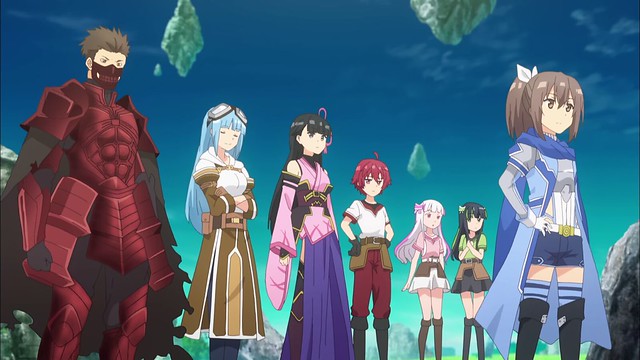 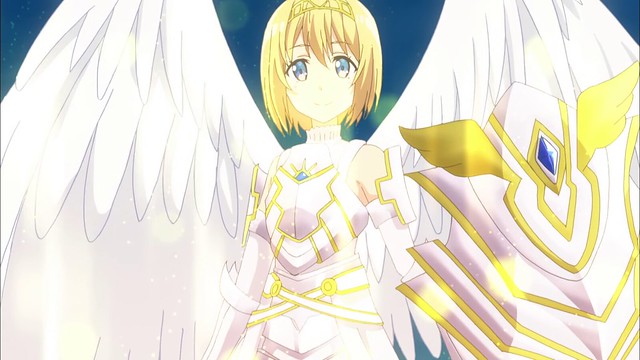 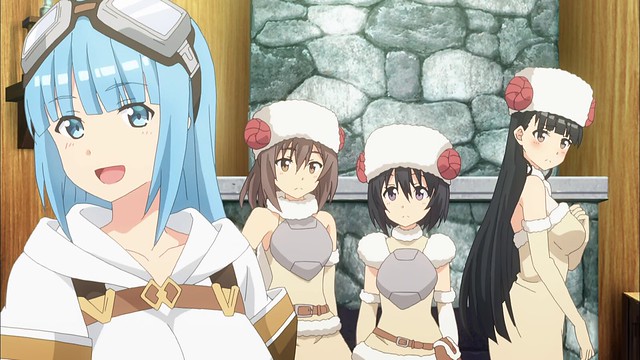 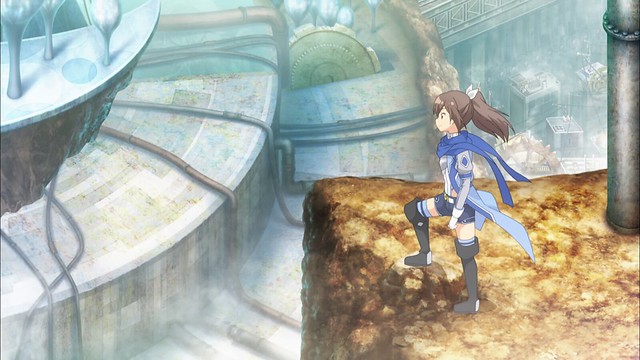 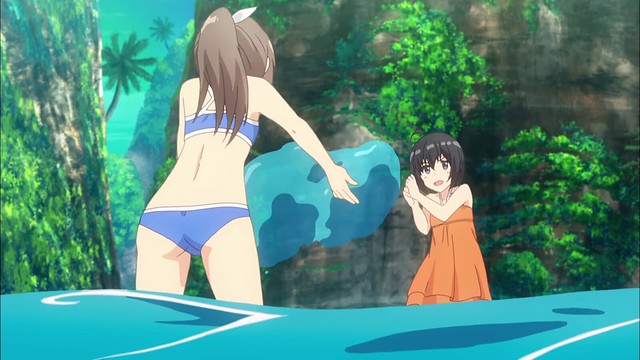 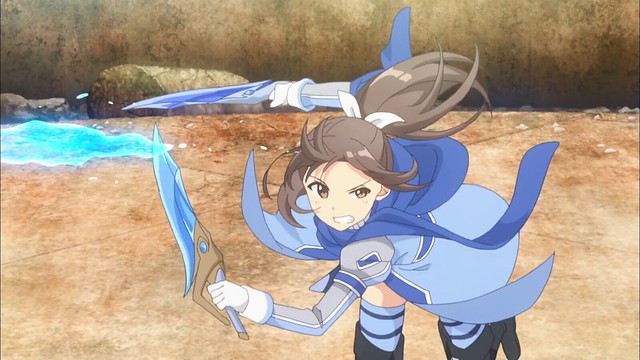 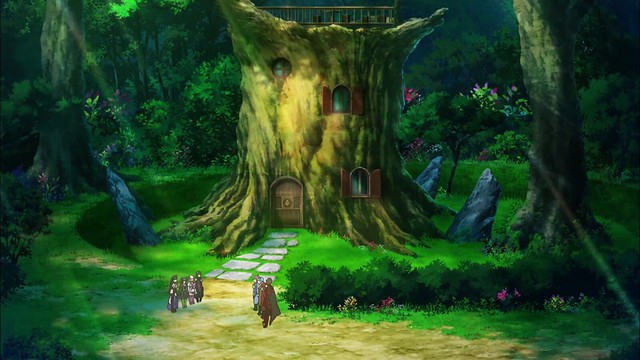 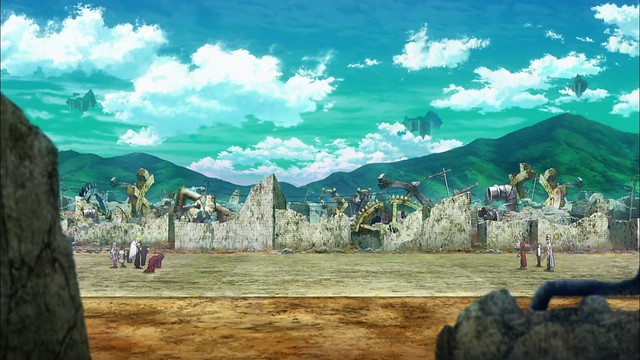 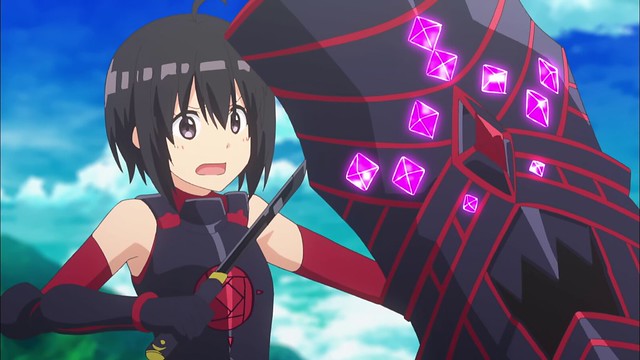 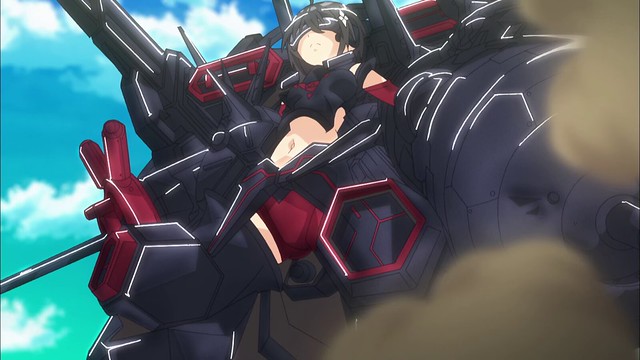 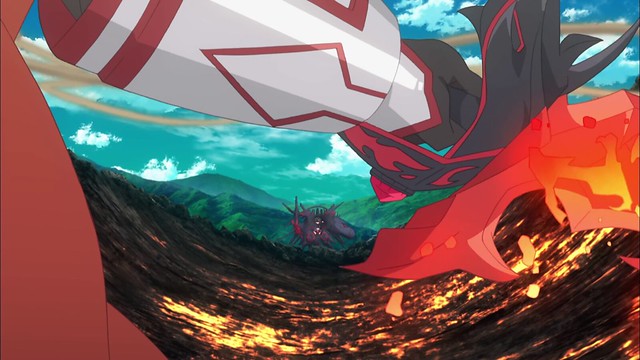 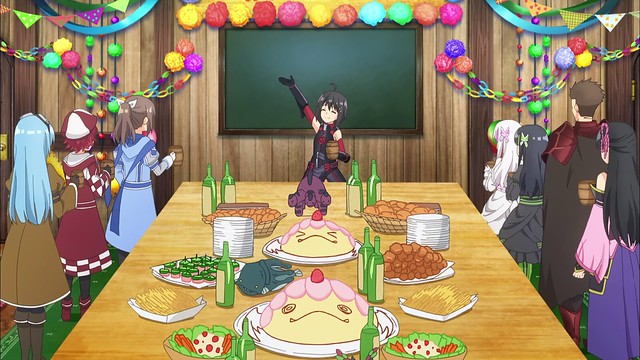 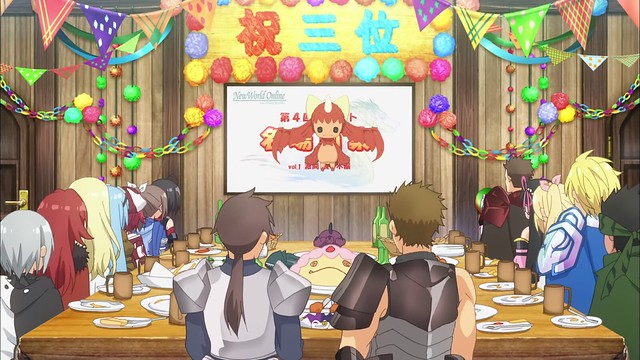 Besides bringing back memories of my old multi-agent systems and biological computation courses, Bofuri held my interests because of its successful melding of multiple aspects from a range of different series to create a vivid world for Maple and her friends to explore. Much as how Maple uses her skills to augment her offensive capabilities and mobility, Bofuri combines traits for a range of genres to create a highly unusual, but engaging result. Maple herself resembles Yama no Susume‘s Aoi, GochiUsa‘s Cocoa and Kiniro Mosaic‘s Shinobu in manner, with a fondness for all things adorable. This conceals her fearsome capabilities in a game that takes the sophistication of the different titles seen in Sword Art Online; NWO is as advanced as the worlds that Kirito and his friends must navigate, although without the threat of death hanging over their heads, Maple’s time in NWO is much more laid-back in manner, and Bofuri makes it clear that while PvE and PvP engagements can become very heated, at the end of the day, NWO is still just a game. Because NWO is about fun, first and foremost, this allows Bofuri to capitalise on Maple’s outrageous capers as a source of humour. The comedy in Bofuri, not as outlandish or perverse as something like KonoSuba, nonetheless has a similar effect of creating a light-hearted atmosphere that reassures viewers. Finally, with her absurd durability, fights involving Maple inevitably resemble those of Girls und Panzer in that, while it is a foregone conclusion that Maple and her friends will find ways to succeed, the path towards this victory becomes the most exciting piece to watch (rather similarly to how Miho’s victories are almost always assured, and the fun comes from the journey rather than the outcome). Altogether, Bofuri acts as a very meta presentation of how unusual combinations can succeed, and in conjunction with Silver Link’s excellent adaptation (fluidly-animated fight scenes, a vividly-presented world that feels life-like, strong voice acting and a good soundtrack), Bofuri is something that proved unexpectedly enjoyable: this is a series suited for folks who are looking for a series about VR gaming without the gravity of something like Sword Art Online, or else are in the market for a series with some isekai elements without being set in a parallel world or a moody story. Finally, news has reached my ears of a second season for Bofuri, and I would be interested to see where things go from here on out: I would not have any objections to viewing and writing about Bofuri‘s second season once it becomes available.

3 responses to “Defense and Multi-Agent Reinforcement Learning in Bofuri: A Whole-series Review and Recommendation”