The Otafest Question: Insights Into Anime Culture From An Older Era Through Lucky☆Star

“The TV show ended by saying how young people are becoming increasingly illiterate, but doesn’t browsing the Internet and blogging actually improve your literacy?” – Konata Izumi

Konata Izumi is a high school otaku who lives in Kasukabe, Saitama. A devout fan of anime and games, Konata prefers to indulge in her hobbies rather than pursue her studies, but in spite of this, always manages to get by. With her friends, twin sisters Kagami and Tsukasa Hiiragi, and the gentle but wealthy Miyuki Takara, the girls live out their high school days peacefully, from exams and sports events, to culture festivals and summer break. As the girls move into their final year of high school, the first years, Yutaka Kobayakawa, Minami Iwasaki, Hiyori Tamura and Patricia Martin, join the girls’ ranks. This is Lucky☆Star; originally a four-panel manga serialised to Comptiq from 2003, an anime adaptation was produced and ran from April to September of 2007. Author Kagami Yoshimizu originally conceived of the series as being a portrayal of ordinary high school life with a focus on the anime subculture and its members, otaku: when it was brought to life by Kyoto Animation, Lucky☆Star immediately became a smash hit despite lacking a central narrative and theme. The series presents the unique humour present in the lives of otaku, who immediately related to the circumstances that Konata experiences. Even for fans of the slice-of-life genre, Lucky☆Star comes across as being a very niche series, designed to appeal to those with familiarity surrounding the otaku subculture: there are numerous references to older series like G Gundam, as well as popular contemporary series like The Melancholy of Suzumiya Haruhi, and so, viewers begin to appreciate Kagami, Tsukasa and Miyuki’s presence, as they serve to help put Konata’s non sequitur thought processes in a more relatable manner. Unconventional by all regards, Lucky☆Star became a surprising success during its run. Thirteen years later, Lucky☆Star has aged gracefully, retaining its entertainment value, but the anime now also provides a glimpse into the anime community of a time immediately before Apple revolutionised the face of communications with its first iPhone.

Lucky☆Star portrays the otaku subculture as it was during the mid-2000s. This was when the internet began moving towards the level of ubiquity and robustness that we currently see but had not quite reached that point. Online discussions were becoming more commonplace, but networks had not quite reached the point where watching anime was as simple as streaming from an online service. In this time of transition, Konata swings by a local bookstore to buy manga volumes, watches her anime from television channels and, but utilises the internet for discussing the latest episode of a series, as well as learn of upcoming anime-related events and specials. Kagami, a more moderate fan, often accompanies Konata to the bookstore to check out manga and light novels available, too. It’s is a time where anime, manga and games were consumed in a different fashion, certainly one that was much slower-paced, and consequently, the different extents one could be involved with the anime subculture were more distinct. On one hand, Konata embodies the dedicated fan, an otaku who embraces the internet to keep up to date with everything related to her interests. By comparison, Kagami, while still partaking in anime, games light novels and manga of her choice, does not participate in online discussions or keep a close eye on anime-and-manga-related events. Despite the disparity in their level of engagement with fandom, and despite not always seeing eye-to-eye, Konata and Kagami are able to have real-world conversations together and participate in events together. This tangible interaction helps them to understand the other better. Kagami is able to keep up with Konata in discussions, and the two do genuinely care for one another, going to great lengths to do favours and look out for one another. Lucky☆Star suggests that the real-life dynamics between otaku who interact face-to-face have a nontrivial, positive impact on one another: this is a bit of a nostalgic trip that indicates that in spite of varied opinions about their hobby, anime fans ultimately share more similarities than differences, and that the face-to-face component is a very strong piece of fostering this sense of camaraderie. 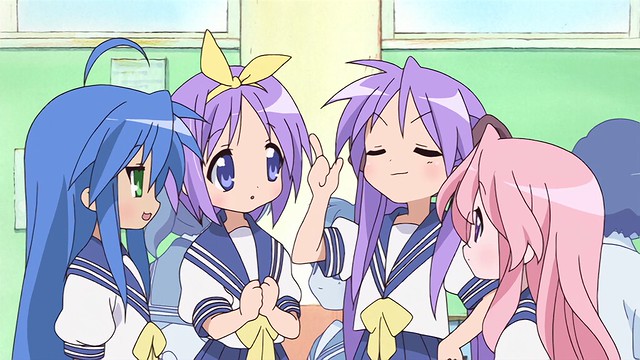 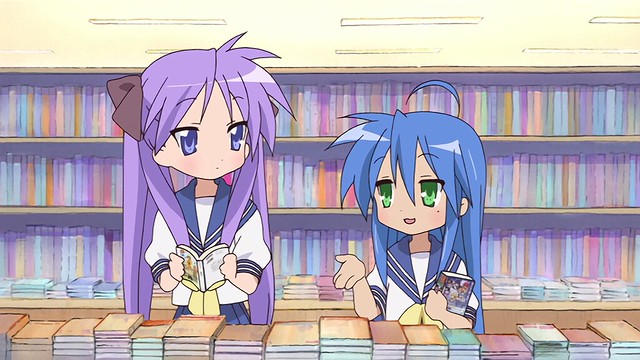 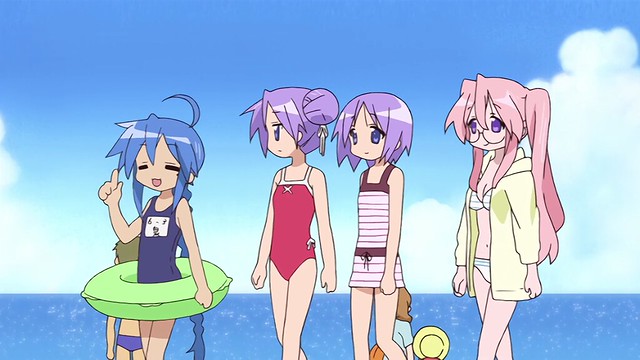 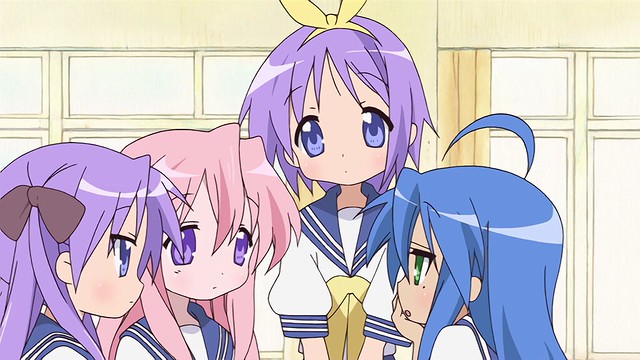 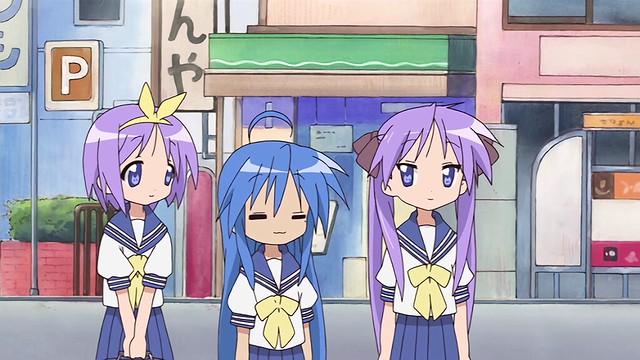 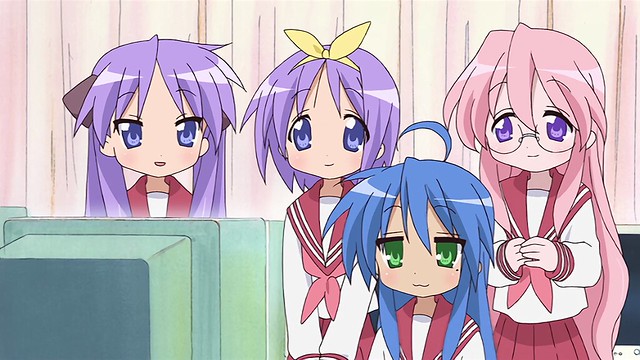 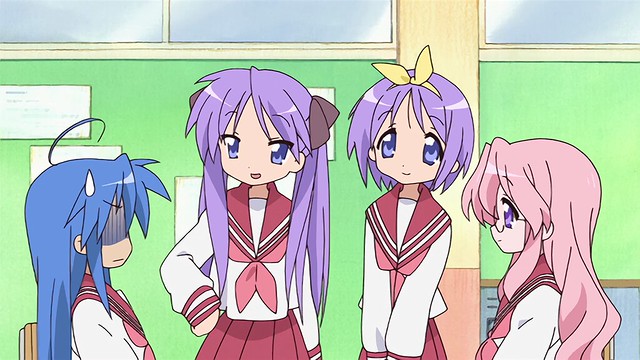 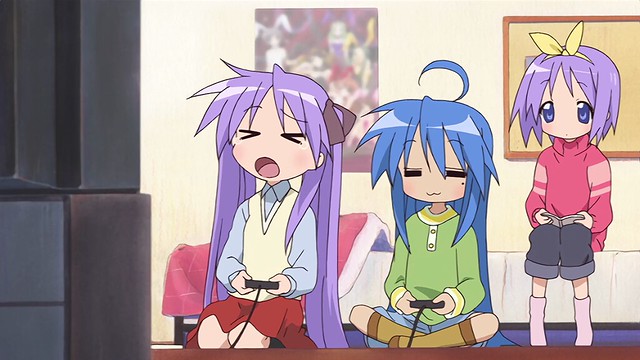 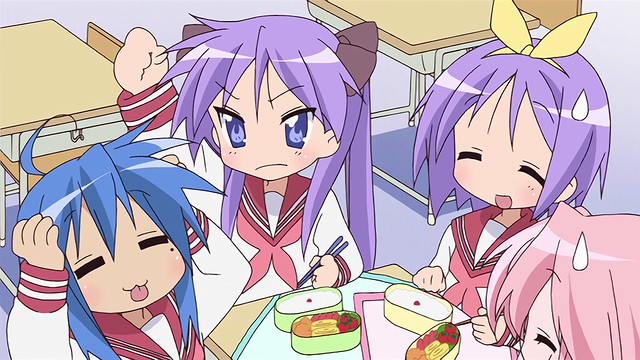 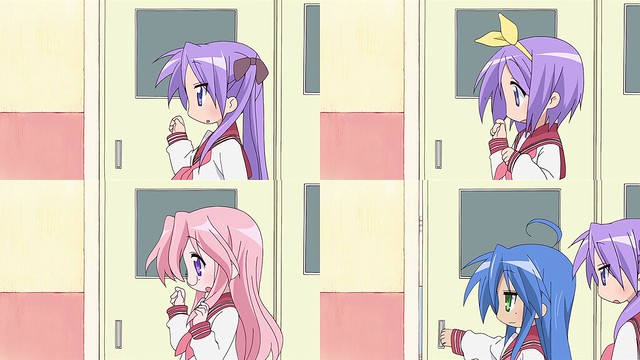 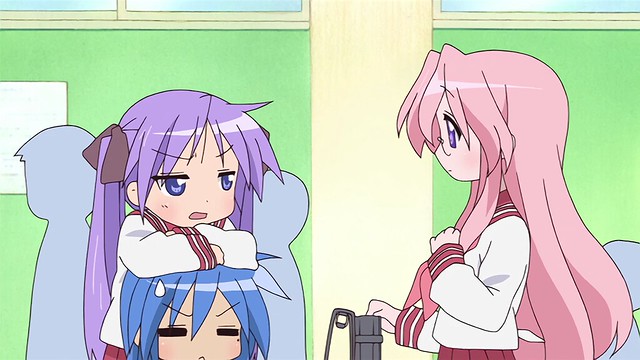 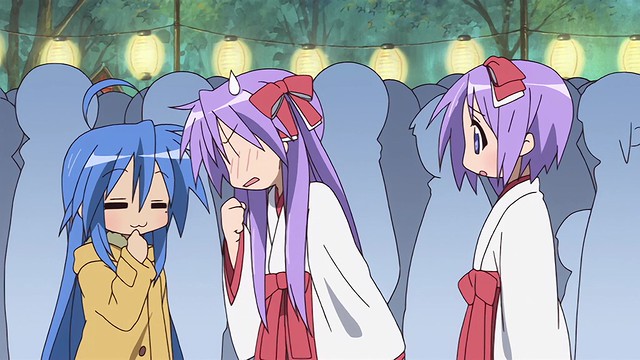 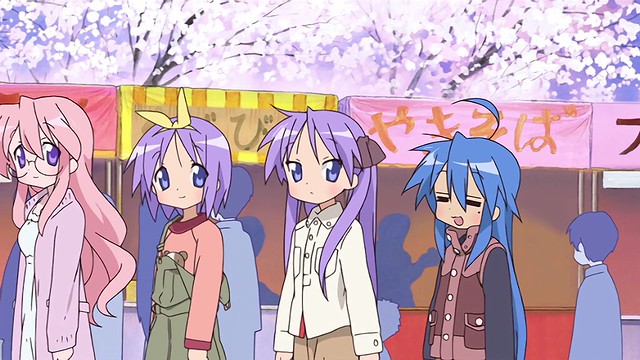 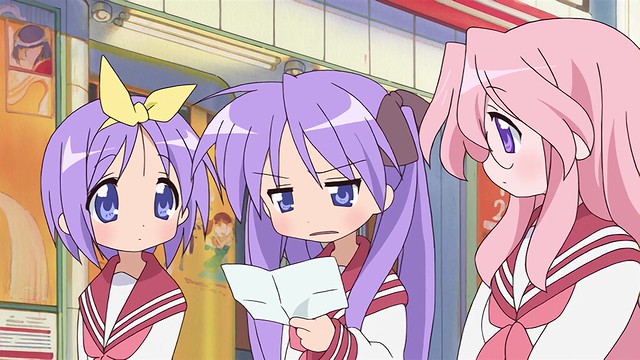 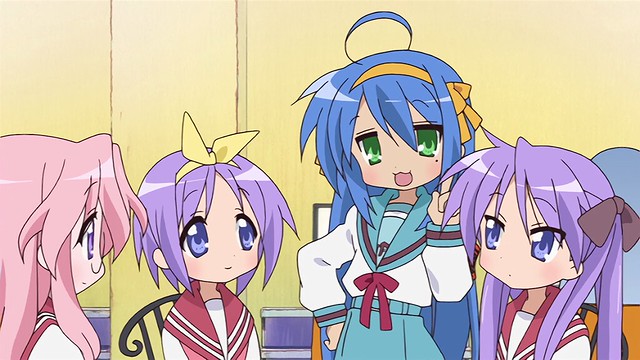 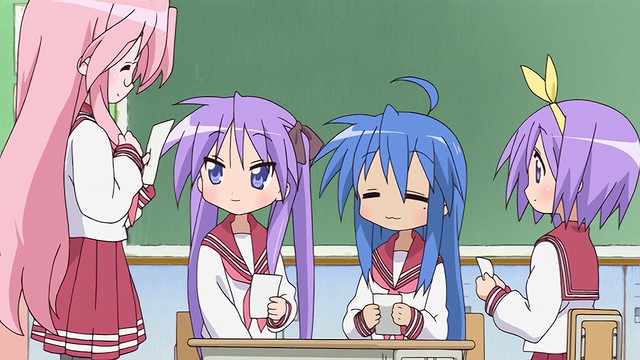 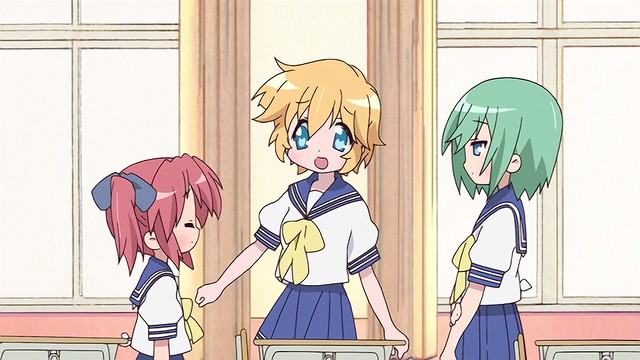 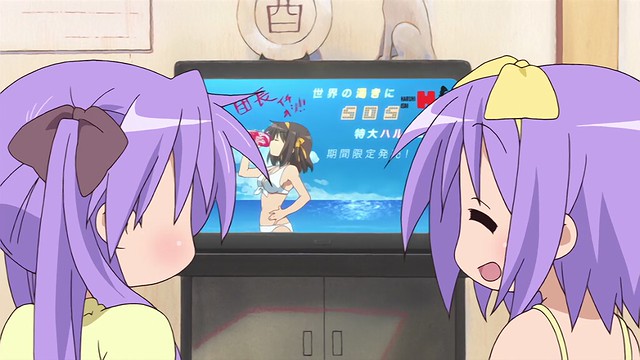 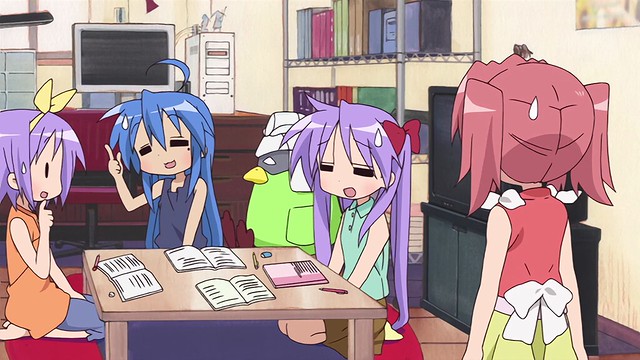 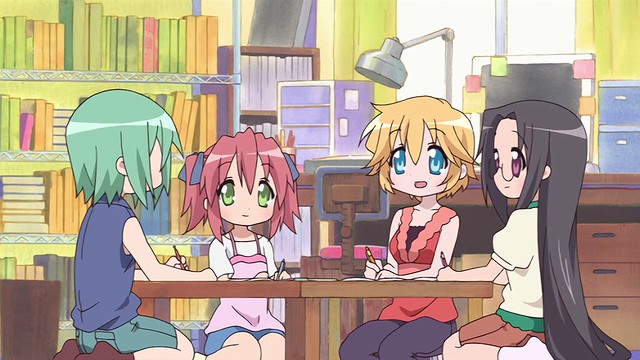 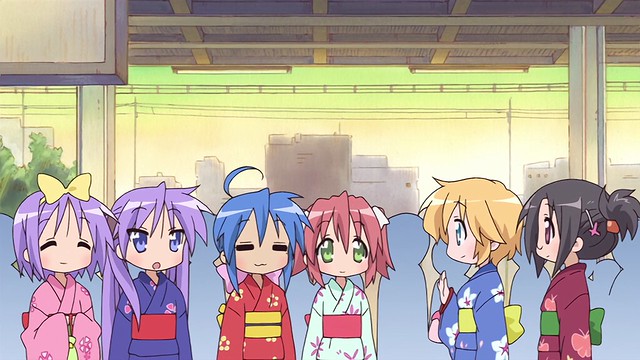 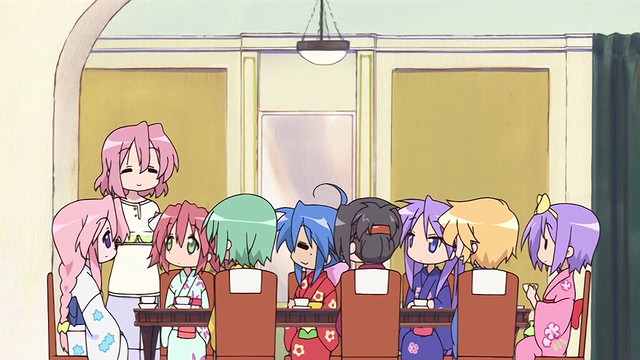 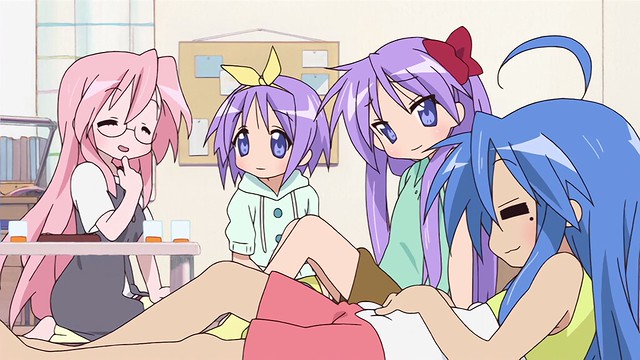 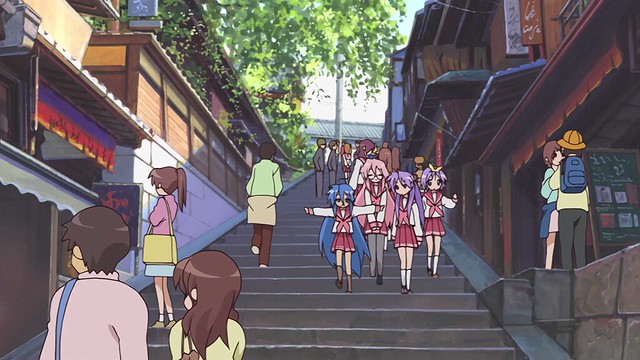 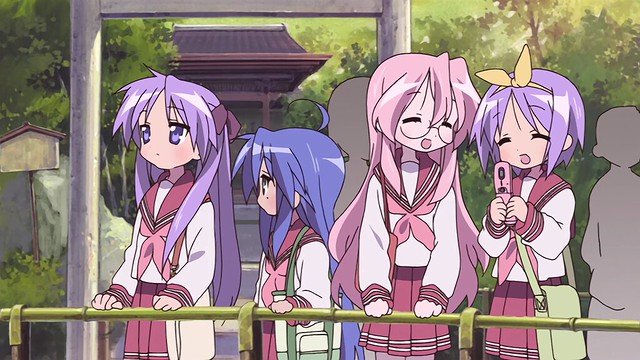 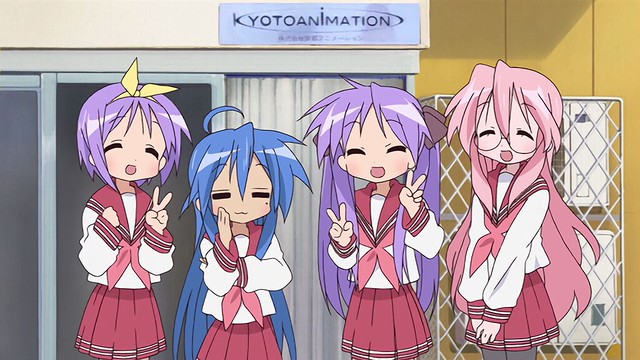 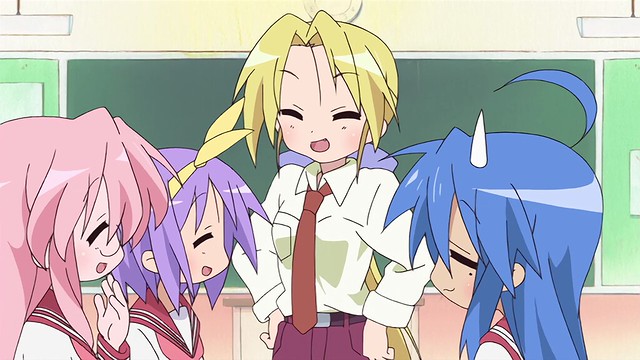 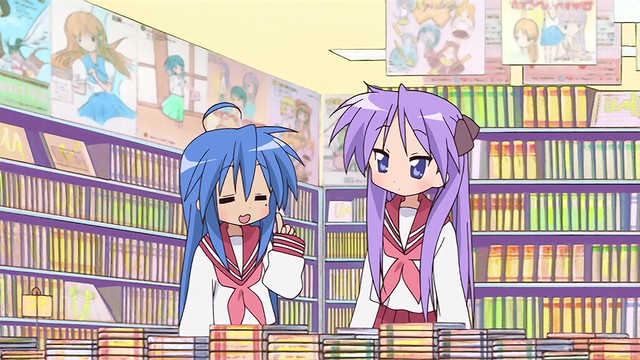 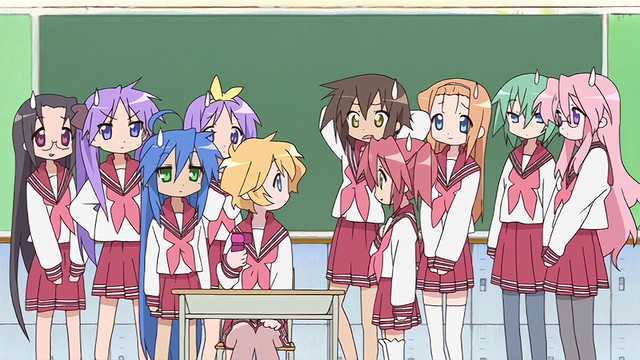 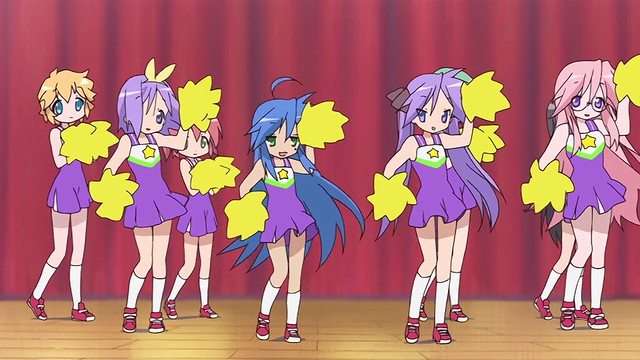 Through Lucky☆Star, one gains a modicum of insight into the world of anime culture prior to the propagation of broadband internet and smartphones: the anime community would’ve been a bit more tightly-knit, and this closeness would have extended into the real world. While this closeness is diminishing, as more anime fans move their interests into virtual space, there are some events and venues that still channel the atmosphere surrounding the anime subculture as seen in Lucky☆Star: the anime convention is one such event, bringing fans together to celebrate their hobby. From browsing through the manga, anime and merchandise in the vendors hall, to seeing cosplayers and the immense amount of effort they put into their costumes, as well as the more dedicated panels that showcase how to paint plastic models and specialty features like a Maid Café, the sort of world that Konata and Kagami experienced in Lucky☆Star are, for a few days of the year, brought to life by the efforts of dedicated and committed convention staff. Specialty shops that sell anime and manga along with Japanese merchandise, also create this feeling at a smaller scale, and for the intrepid, a visit to Akihabara will show that the anime subculture, as Lucky☆Star presents it, is still very much alive. Of course, anime conventions don’t happen every day, and trips to Japan can be prohibitively costly, so it is unsurprising that, despite lacking a cohesive narrative and central theme, Lucky☆Star has endured after all this time: its charms come from illustrating the anime community from an older time, and the nostalgia surrounding this period is something that viewers may find worthwhile in revisiting.

6 responses to “The Otafest Question: Insights Into Anime Culture From An Older Era Through Lucky☆Star”