Houkago Teibou Nisshi: Review and Reflections At The Halfway Point

3 Comments Posted by infinitezenith on August 14, 2020

“One thing I love to eat on fish, and not too many people save, is the liver. I find the liver and the heart, the tastiest part of the fish.” –Les Stroud

At low tide, Yūki decides to take the Breakwater Club out to the tidal flats to gather clams. Hina and Natsumi end up being stuck in the mud when they ignore Yūki’s warnings not to go out too far, and both end up falling into the mud. Despite this, the Breakwater Club finds a large number of Manila clams, and Hina even manages to score a hamaguri. They bring them back to the clubhouse, but Yūki and Makoto freeze in their tracks when they hear a car pull up – it’s Sayaka Kotani, the club advisor and school nurse. While she seems friendly enough, she breaks out the beer and winds up drunk: Yūki and Makoto lament that Sayaka’s managed to eat most of their catch, although Sayaka soon falls asleep, leaving the girls to grill up the remaining clams. As Hina prepares to enjoy the hamaguri, Sayaka somehow manages to eat it from Hina’s chopsticks, leaving her in shock. Later, the club go out to fish for horse mackerel fry again after picking up provisions from a local fishing supply store. With Makoto and Natsumi’s help, Hina learns how to properly gut the fish, realising it’s no different than removing the stuffing from a plushie. When Hina’s parents express a want to enjoy horse mackerel fry again, Hina decides to go out and fish using the tackle and hooks from home, but experiences no success. Natsumi drops by and explains that Hina’s been using the wrong size of hook and a fishing rod that’s a bit too stiff for the task. With Natsumi’s help, Hina is able to turn things around and ends the day exhausted, but with a sizeable haul. This is where Houkago Teibou Nisshi stands at the halfway point, where changes in Hina’s attitudes towards fishing are gradually shifting as a result of her experiences with the eccentric, but sincere and accepting members of the Breakwater Club.

The most rewarding payoff from watching Houkago Teibou Nisshi thus far is seen in Hina, who’s outlook on fishing is becoming increasingly positive, and whose fears are slowly replaced by a genuine curiosity and appreciation of fishing. With support and encouragement from her fellow club members, Hina begins to realise that despite seeming quite disparate, there are some commonalities between handicrafts and fishing – the suggestion that gutting a fish can be thought of as extracting stuffing from a plushie helps her to focus. Similarly, Hina’s become more confident about fishing now, having seen how it can bring about joy. When she decides to go fishing on her own, it shows that she’s developed enough knowledge to be confident in trying things out for herself. While Hina’s still inexperienced, that she’s beginning to take the initiative shows that despite her initial worries, she’s come to enjoy fishing. It is remarkably heartwarming to see this change, and I imagine that as Houkago Teibou Nisshi continues, Hina will continue to hone her craft, and over time, develop enough familiarity as to be not only comfortable, but confident in catching and preparing larger fish, as well. While the Breakwater Club is an unconventional one, it’s been shown that Hina’s in good company here, coming to really learn and appreciate the origins of her food more. 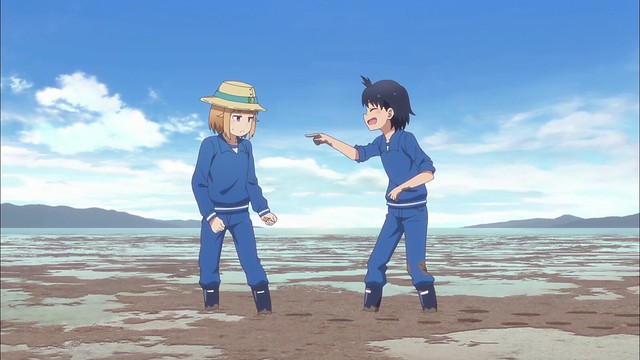 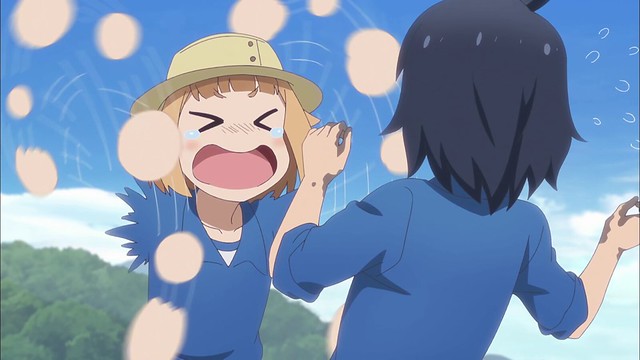 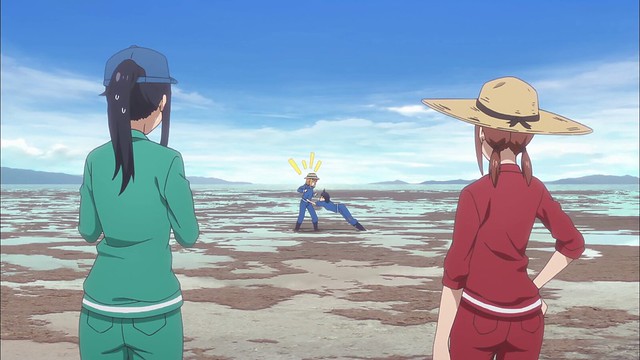 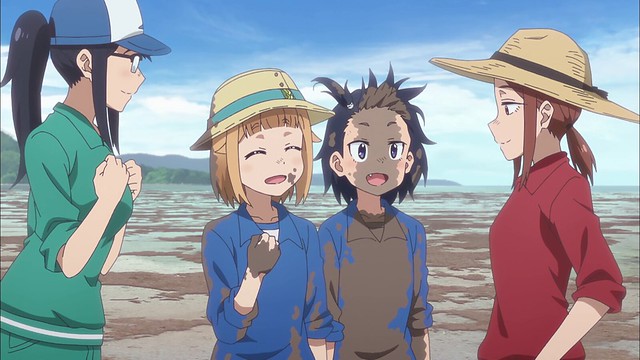 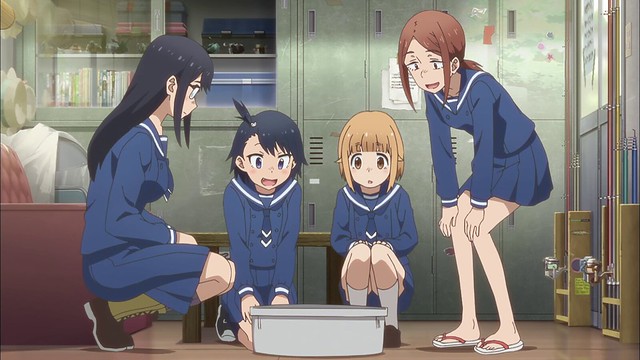 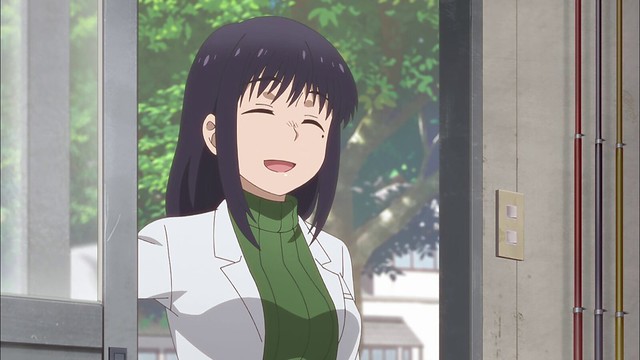 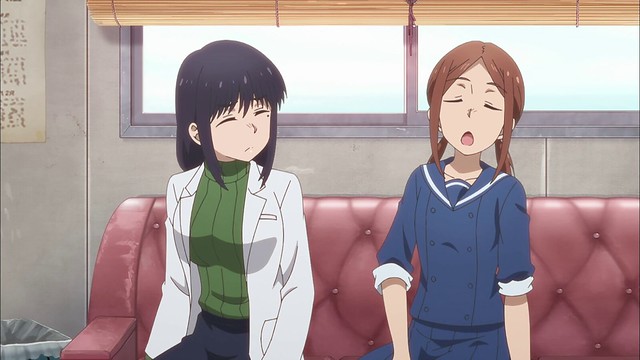 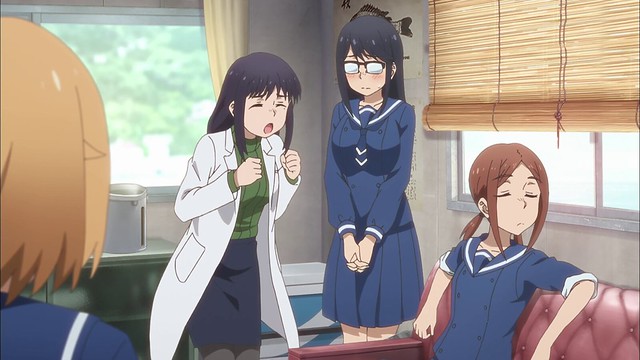 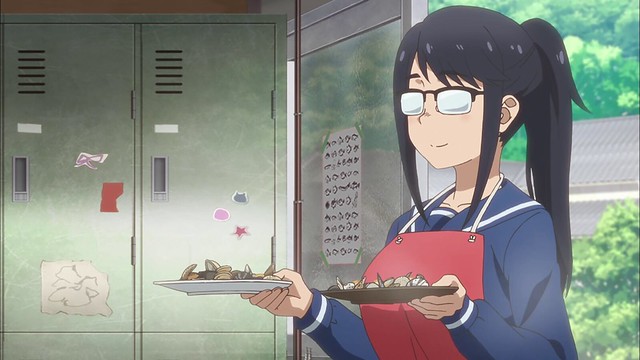 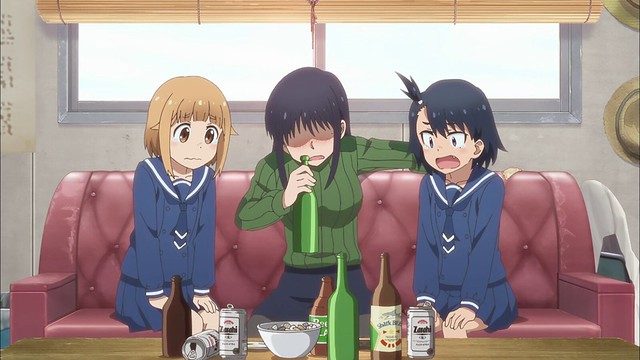 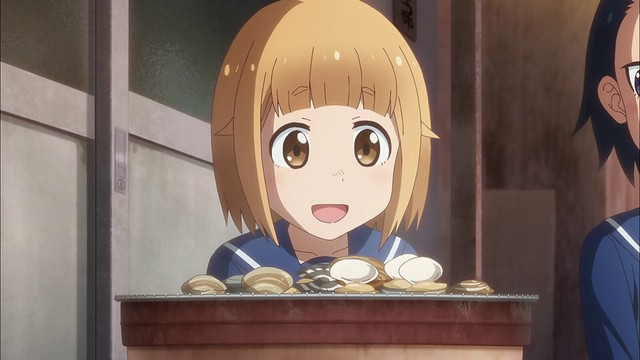 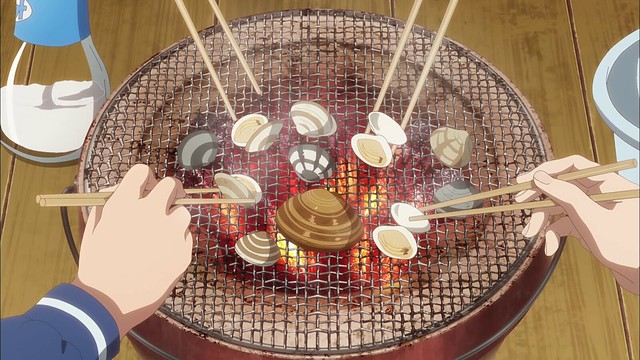 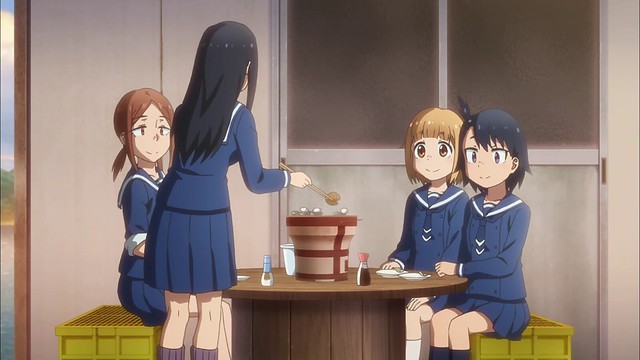 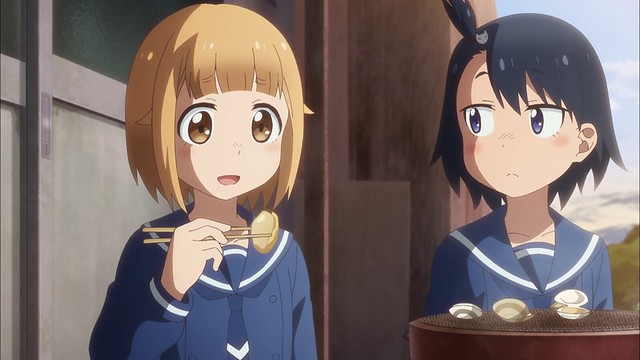 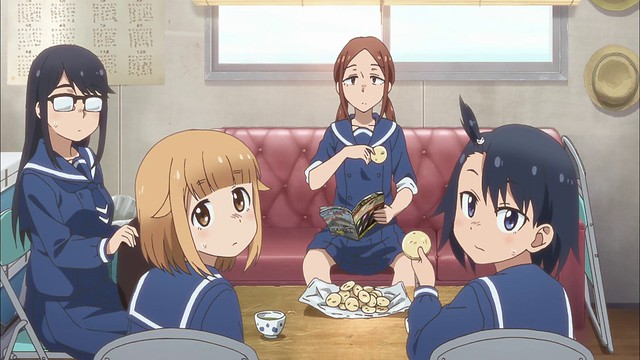 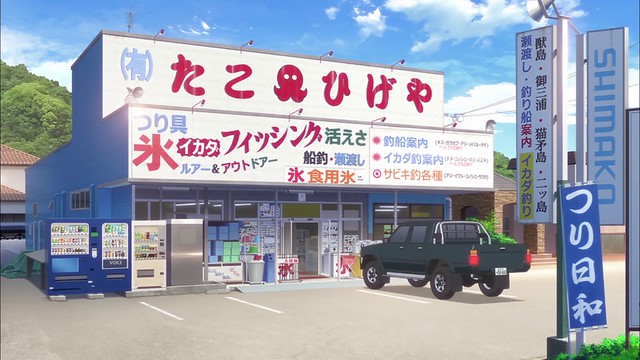 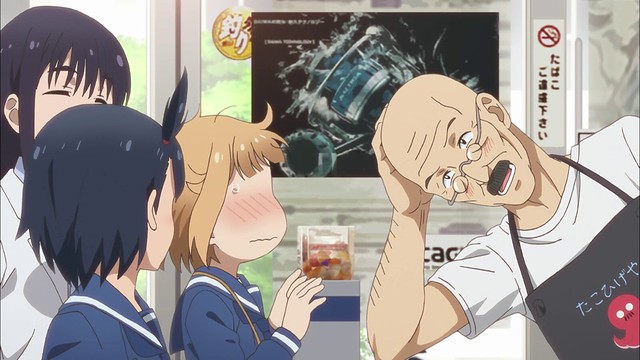 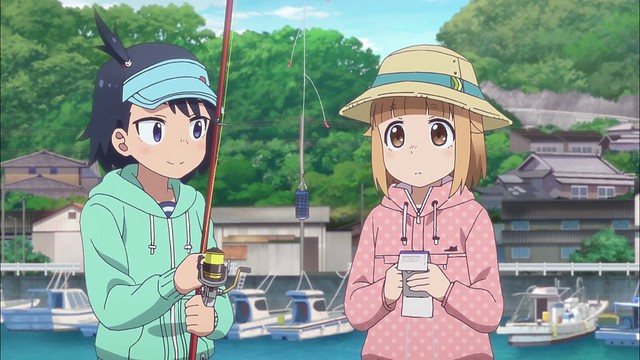 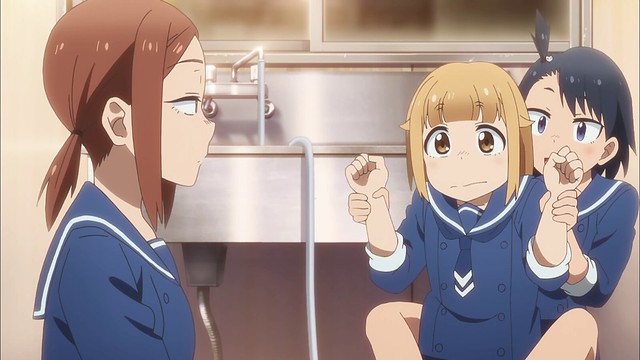 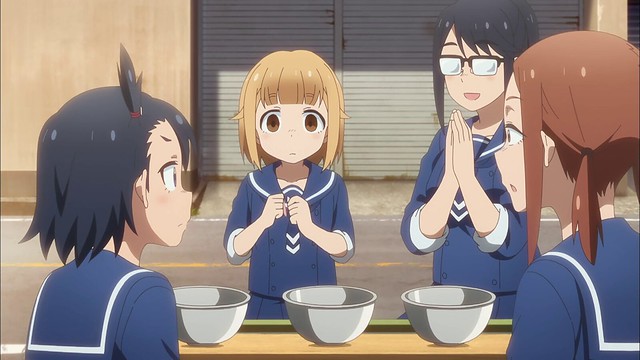 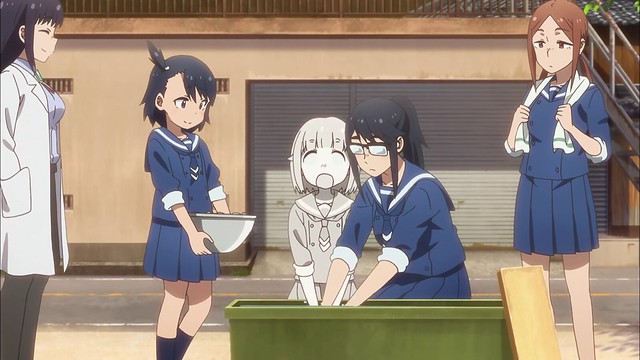 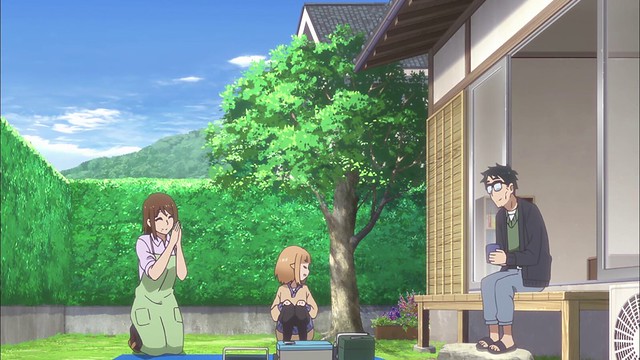 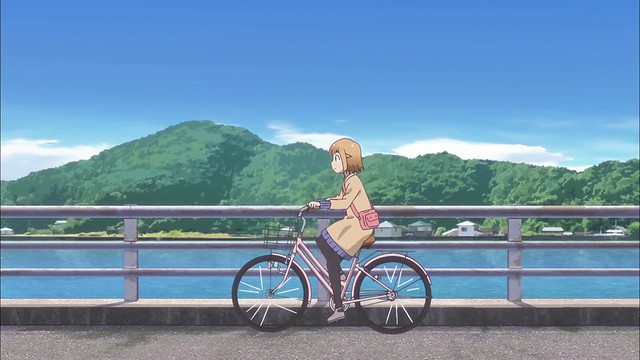 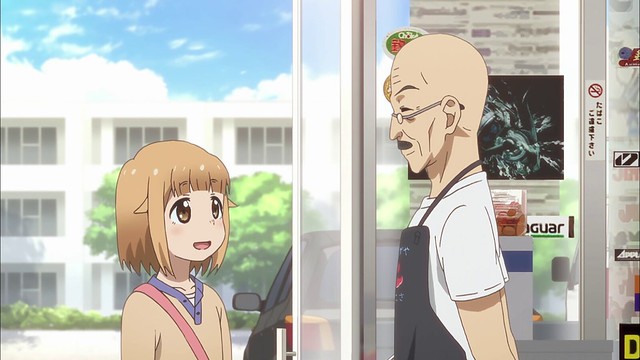 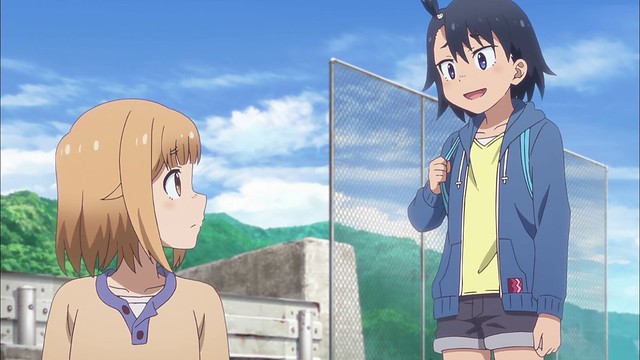 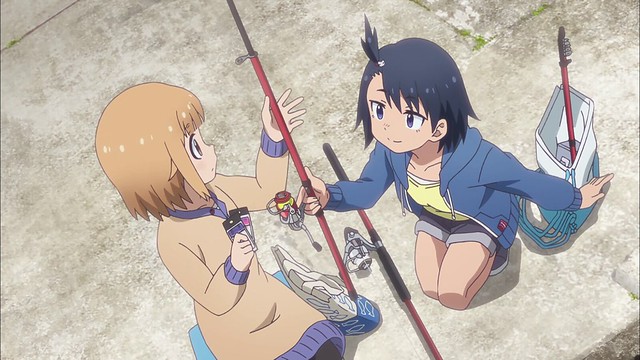 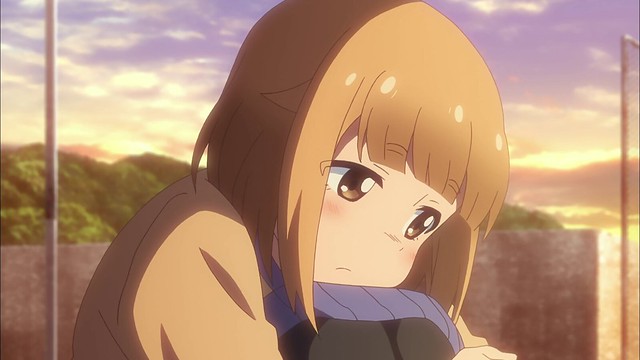 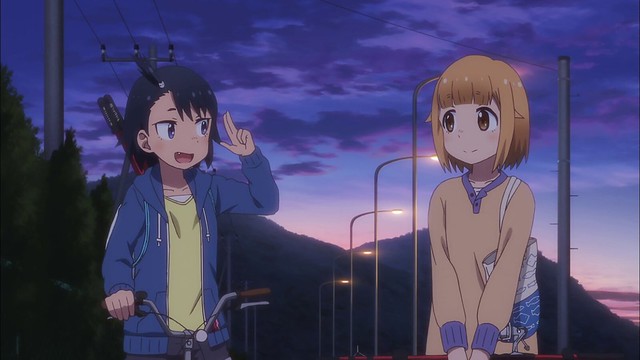 Having now passed the halfway point of Houkago Teibou Nisshi, the anime’s shaping up to be a cathartic, if familiar one; the introduction of Sayaka Kotani evokes memories of Yuru Camp△‘s very own Minami Toba, who is similarly a beautiful and soft-spoken teacher concealing a penchant for drinking like a sailor. This archetype appears to be employed for comedy, and while an intoxicated teacher can break the calming, relaxing feel in their respective series, it also mixes things up – Yūki and Makoto have been the reliable seniors insofar, with their presence being reassuring to Hina, but when Sayaka appears, even those two are shaken up. This creates a richer characterisation of everyone in Houkago Teibou Nisshi, allowing more aspects of their personalities to be shown. Similarly, having a teacher with a motor vehicle also facilities for additional adventures: the Breakwater Club had previously biked or walked to local fishing areas, but as Hina becomes familiar with these, the story can drive her growth in new settings further away from home to create experiences memorable for both Hina and the viewers. As we enter the next quarter of Houkago Teibou Nisshi, I am quite excited to see what adventures await the Breakwater Club, as well as what marine life is on their list of things to catch and enjoy and perhaps, even see Hina become at least confident with seeing the entire process through to the end.

3 responses to “Houkago Teibou Nisshi: Review and Reflections At The Halfway Point”