Houkago Teibou Nisshi: Review and Reflections At The ¾ mark

3 Comments Posted by infinitezenith on September 1, 2020

“We have enough Pym particles for one journey each, plus two test runs…one test run.” –Scott Lang, The Avengers: Endgame

On a lazy day, while Yūki is dozing away in the clubroom, Makoto explains the concept of light rock fishing to Hina and Natsumi. Yūki overhears them and decides that this should be their activity for the day, as she’s yearning for some Scorpionfish, which is supposed go great with miso soup. Makoto lends Hina her life-jacket, and Hina manages to catch something shortly after starting out. However, the girls notice that Makoto’s been a little antsy all day. As it turns out, Makoto had fallen into the ocean and very nearly drowned on her first fishing trip, and since then, she’s preferred wearing a life-jacket for safety’s sake, being quite unable to swim. Later, when Hina forgets to study for the upcoming midterms, she swings by Natsumi’s place to study with her, before sharing with Natsumi her love for handicrafts. On a rainy day, club activities are postponed until Yūki and Makoto reveal they’ve been keeping small rods for prawn fishing in the school infirmary. They head to a nearby bridge to fish for freshwater prawns, promising to save some for Sayaka, and although Hina’s initial lack of experience means she’s unsuccessful, Yūki shows her how to properly fish for them. At the end of the day, they have a reasonable haul: Makoto fries them up, and the girls enjoy them under the cool, rainy weather. Later, Sayaka has the Breakwater Club practise floating to ensure survival in an emergency, but Makoto’s fear of the water makes it difficult for her to pick up the techniques. Sayaka ends up introducing an emergency self-inflating waist belt, which assuages Makoto’s fear, but when Hina, Natsumi and Yūki give it a whirl, an irate Sayaka charges the girls for the cost of the compressed air cans. While fishing, Hina notices a heron with a fishing wire stuck to its leg and feels guilty about fishing. Yūki has the Breakwater Club help clear litter around their fishing spot. The next day, Yūki and Hina announce a plan to help the heron out; they manage to capture it and remove the wire. The next day, the heron reappears, having come to expect Hina to give it free food.

While Houkago Teibou Nisshi had been focused on fishing and its processes thus far, the anime has also begun delving into ancillary activities and know-how: fishing, preparing catches and enjoying said catches is fun, but there is a great deal that goes on behind the scenes, from fishermen’s unions to look after local aquatic populations, to health and safety, Houkago Teibou Nisshi is open about each aspect behind the Breakwater Club’s activities. The decidedly duller details are no less important: from ensuring one is able to float and keep safe should they fall into a body of water, or making certain that one leaves no detritus or litter behind from their activities to avoid having an adverse impact on wildlife, Houkago Teibou Nisshi indicates that there is always more to something than meets the eye, and that each activity has an accompanying set of responsibilities participants must uphold. In its ninth episode, Houkago Teibou Nisshi presents a safety and wildlife awareness video elegantly rolled into Hina, Natsumi, Yūki and Makoto’s story. Having established how much fun the girls have had thus far, Houkago Teibou Nisshi gently, but also firmly, reminds viewers that there is more to their activities that must be accounted for, and that in being aware of emergency procedure, safety measures and being respectful to the environment are essentials to fishing. When all of these are factored into one’s activities, one can fully enjoy fishing in a safe and responsible manner, ensuring that they minimise disruption to the environment and also maximise the fruits of their effort. 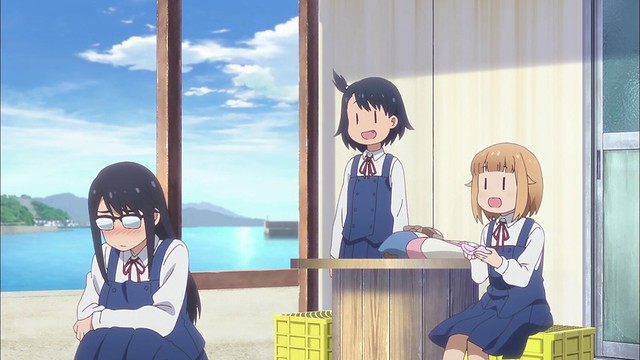 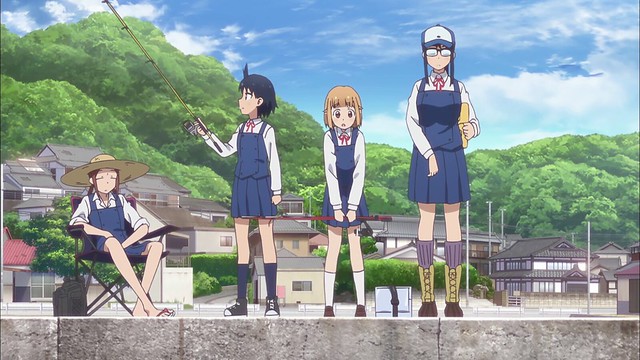 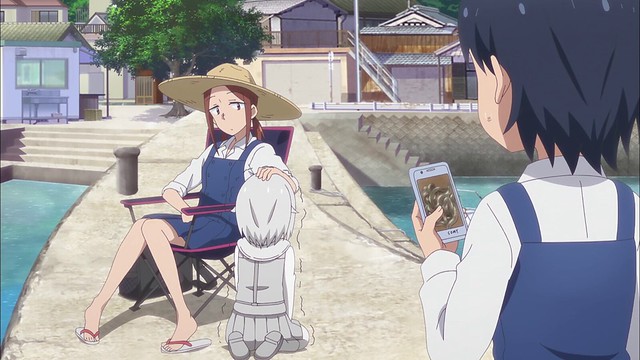 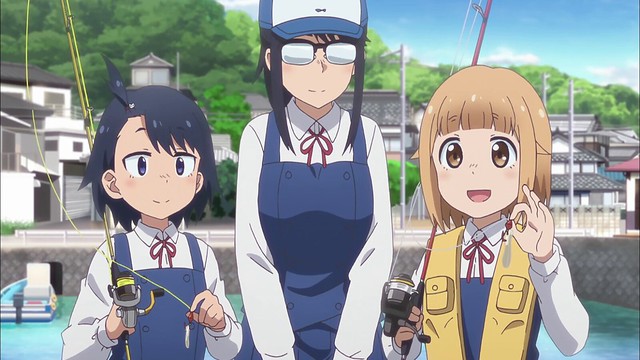 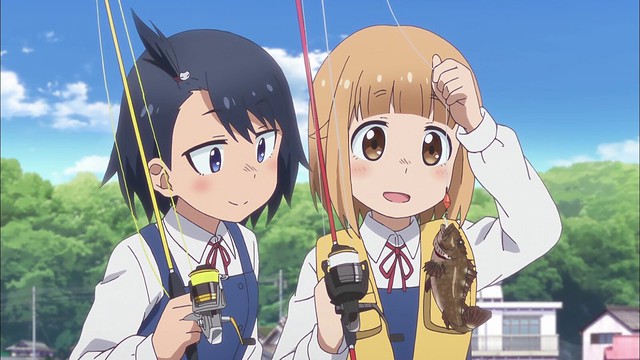 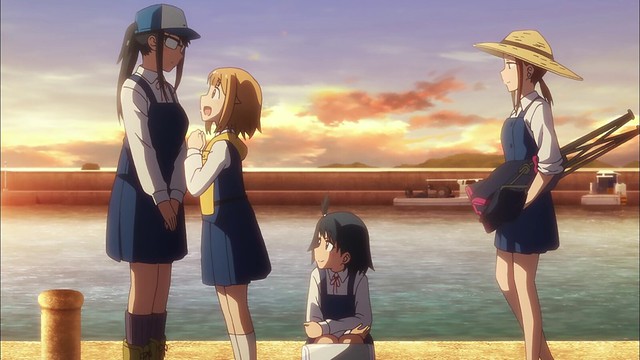 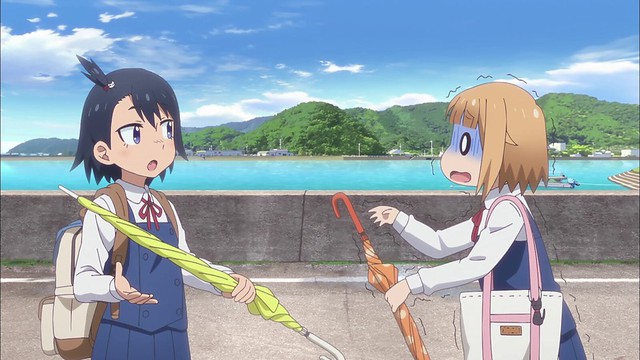 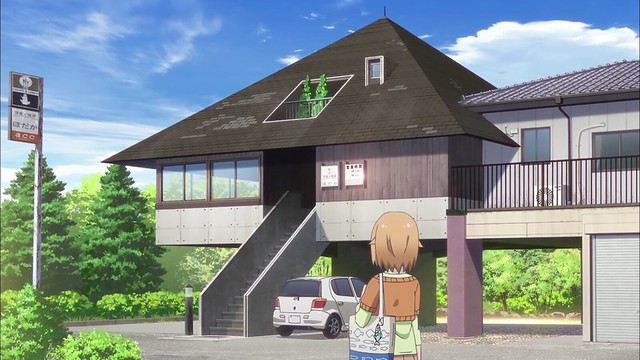 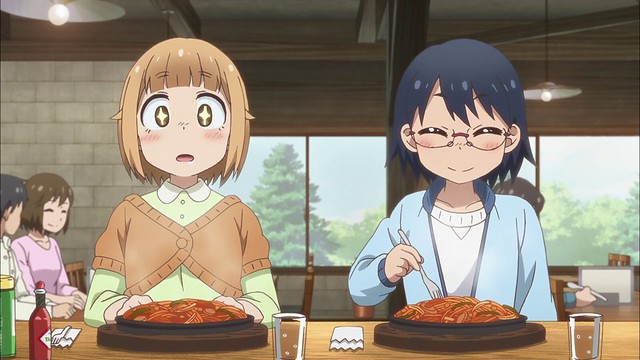 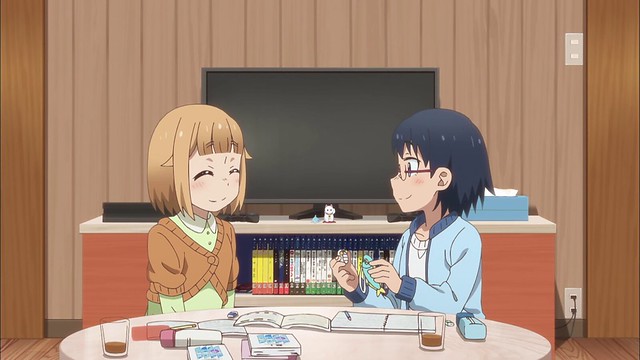 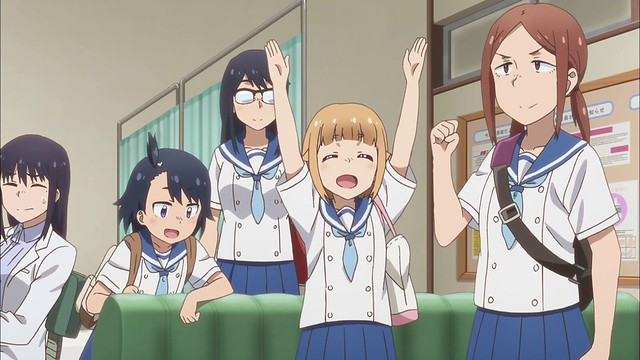 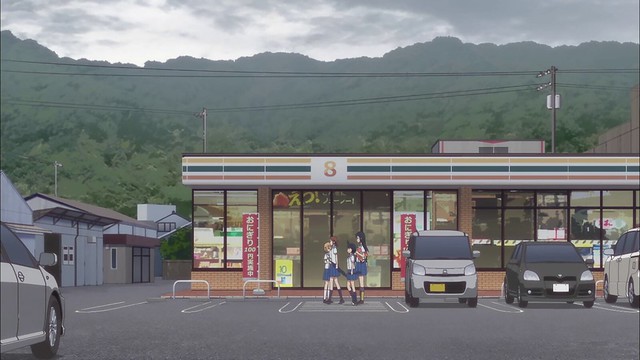 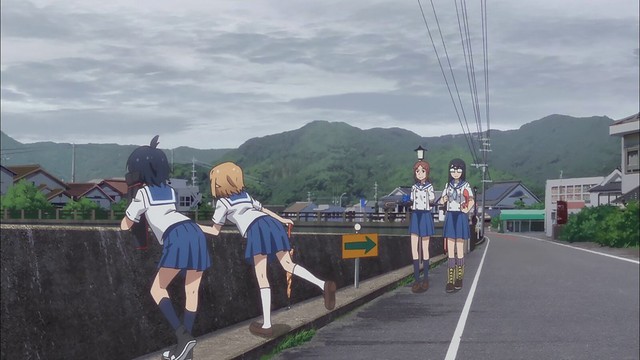 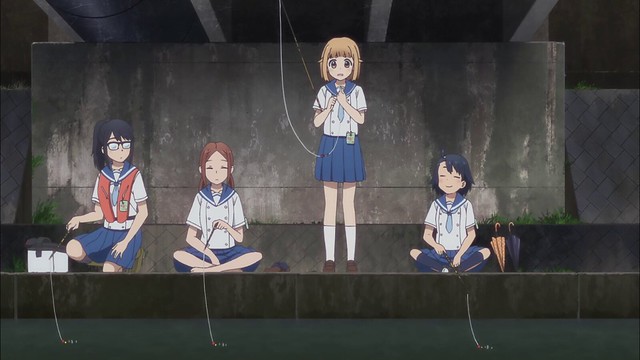 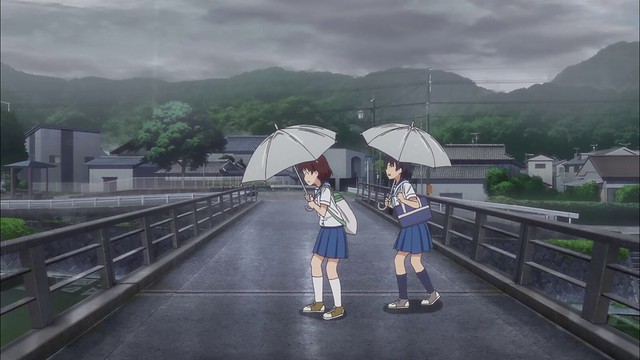 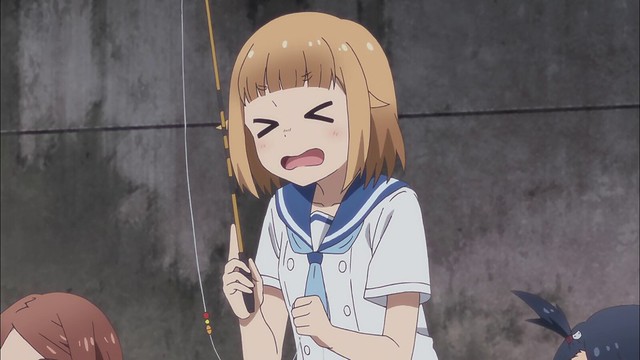 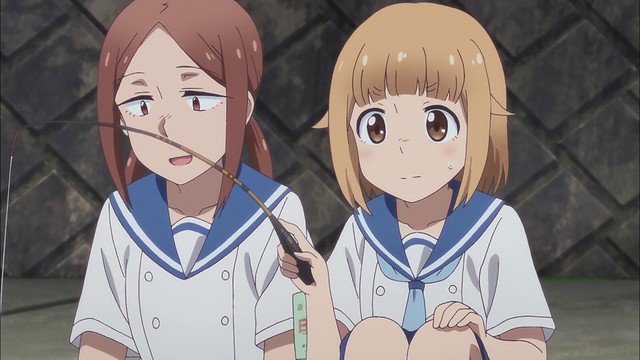 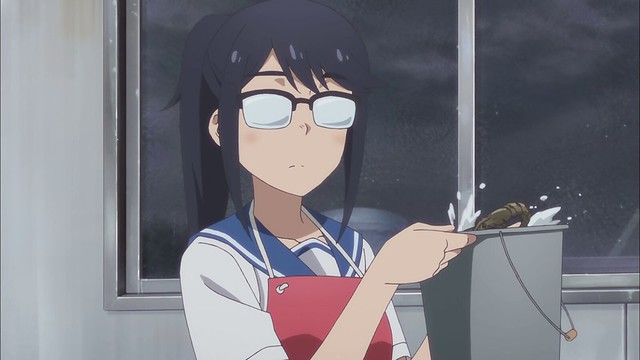 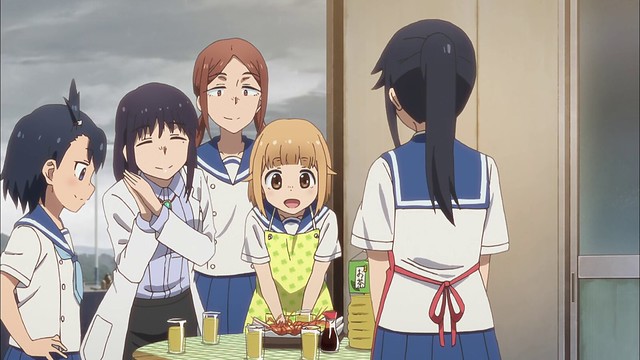 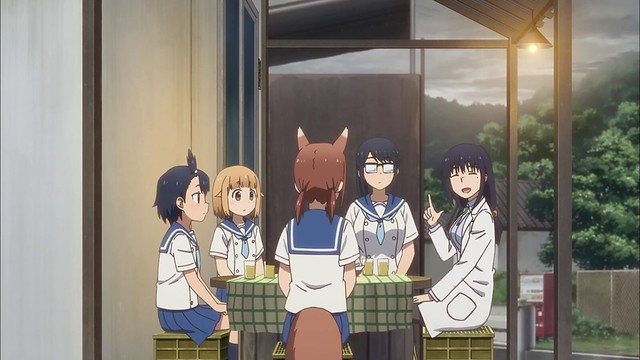 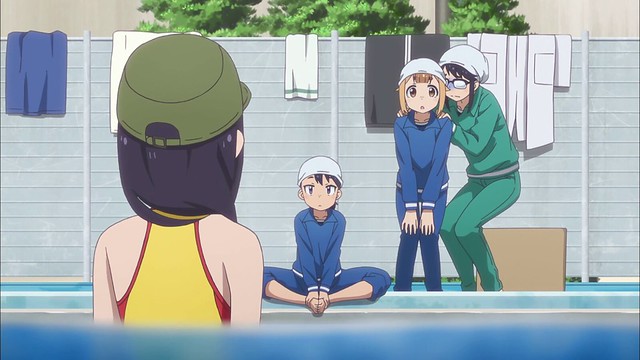 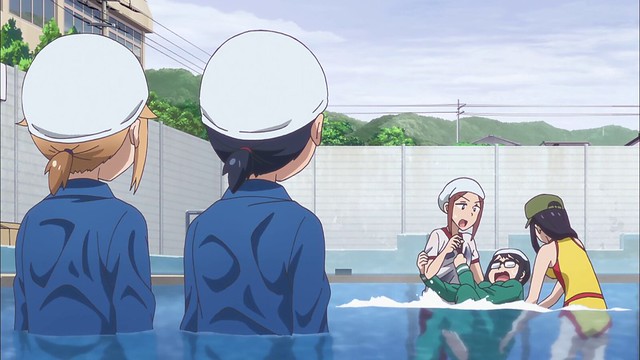 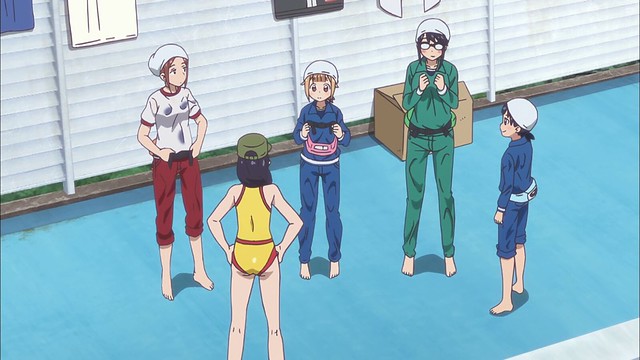 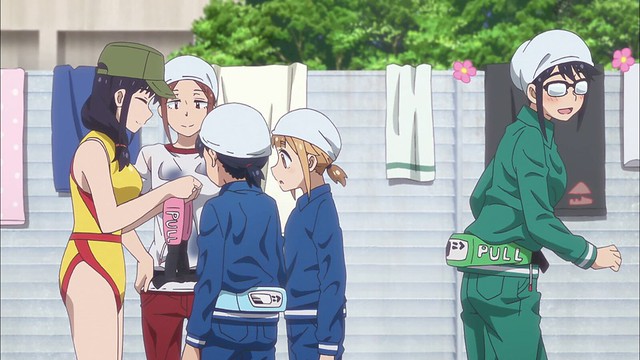 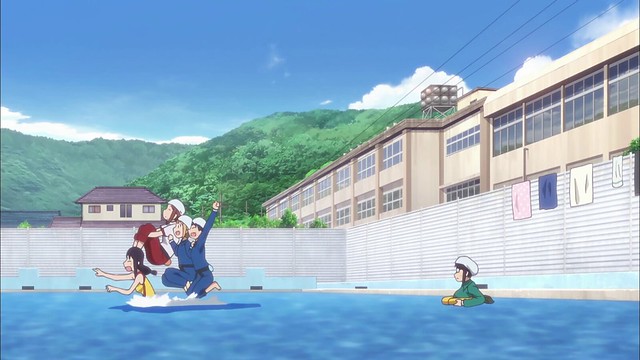 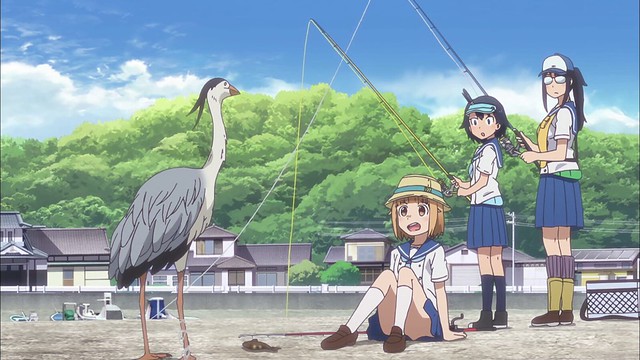 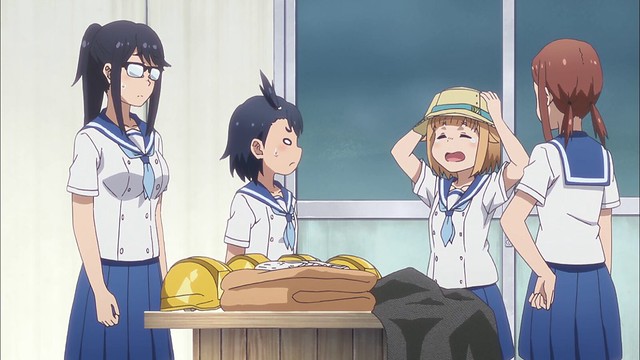 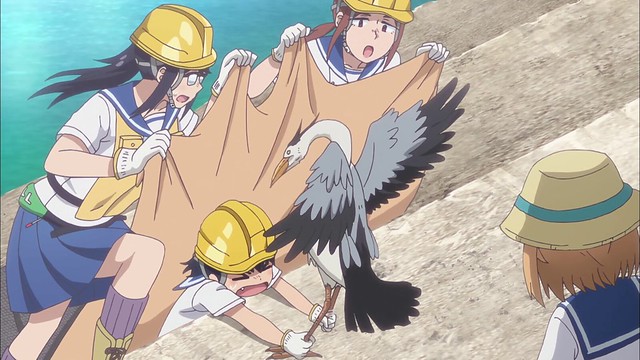 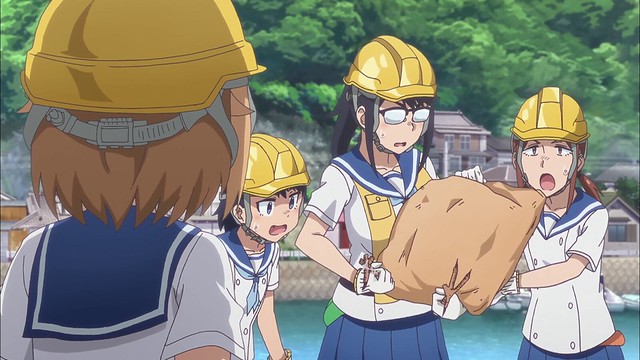 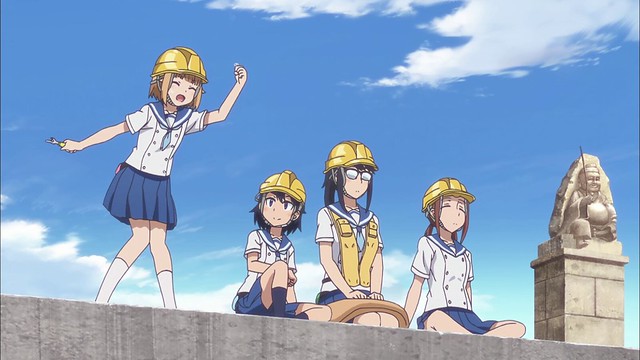 Having now passed Houkago Teibou Nisshi‘s three-quarters mark, I find that the series has consistently delivered a solid experience in each of its episodes, striking a balance between educating viewers on different aspects of fishing, as well as advancing Hina’s growth and increasing familiarity with fishing. However, while Hina’s come to love fishing with her friends, fishing has by no means displaced her existing interests; Hina still loves the handicrafts, and her skills here have come in handy more than once for the Breakwater Club. Joining the Breakwater Club has simply allowed Hina to expand her horizons and also develop a very practical skill in fishing, showing how new experiences do not necessarily change a person completely, but rather, adds to one’s repertoire of existing skills and interests. The key here is to keep an open mind, and being in the company of skilled, like-minded individuals can do wonders in helping one maintain and cultivate their interest in new experiences. Entering the final quarter of Houkago Teibou Nisshi, it is clear that this anime will not disappoint, having firmly established that the series can strike a balance between exploring fishing, Hina’s growth and acclimatisation into the Breakwater Club’s activities and also creating an immensely cathartic atmosphere in each of its episodes. I am greatly looking forwards to seeing where Houkago Teibou Nisshi wraps up, as well as writing about this series once it has completed: this is an anime that has done everything right, having been immensely helpful in helping me to relax and find perspective each and every week.

3 responses to “Houkago Teibou Nisshi: Review and Reflections At The ¾ mark”