“Love and magic have a great deal in common. They enrich the soul, delight the heart. And they both take practice.” –Nora Roberts

Summer is in full swing in the wood-framed town, and Rabbit House is selling chilled coffees as a special. However, Cocoa, Chino and Rize begin to feel that their uniforms are too hot for the weather, so they set about crafting new ones. While out shopping for the materials, they run into Sharo, who helps the girls to pick up the fabric and clothes needed when their favourite store in town is packed. Chino and Rize manage to find fabric in their colours, although Cocoa is less fortunate. Upon returning to Rabbit House, Cocoa recalls that there might’ve been some fabric left in the storeroom that they could use. She finds it, along with a magician set and numerous knick-knacks, including a toy Chino’s grandfather had gifted to her mother long ago. Takahiro suggests that they sell some of the extra stuff at a summer flea market. Chino and Rize are unable to draw in any customers; since it’s slow, Chino and Rize suggest that Cocoa explore. She meets Chiya and Sharo, who decide to help out. When a little girl gets lost, Rize looks for her mother, while Chino stays behind to comfort her. That evening, the girls relax together and Cocoa tries out the magician’s kit in front of the others. Some time later, Cocoa, Rize and Chino try out their new summer uniforms. It’s been five years since GochiUsa‘s second season aired, and today, the third season is in full swing at last. For this third season (BLOOM from here on out for brevity), Encourage Films has taken over from Production dóA, Kinema Citrus and White Fox. Studio changes have occasionally resulted in noticeable visual changes: when Feel produced Oregairu, their style differed greatly from what Brain’s Base had used, and similarly, the gap between GONZO’s Strike Witches and AIC Spirits’ Strike Witches 2 were night and day. However, studios do seem to be more respectful of the aesthetics within established series, and for BLOOM, Encourage Films has opened with a very strong start: Cocoa, Chino, Rize, Chiya and Sharo remain quite unchanged from the earlier seasons, and the studio has succeeded in capturing the wood-framed town’s aesthetic that the earlier seasons and studios had created.

With two seasons already in the books, plus a pair of specials, BLOOM is able to drop viewers into the middle of the summer, a time by which Cocoa has become an integral part of life at Rabbit House. Tellingly, Cocoa’s suggestion to make summer uniforms is met with enthusiasm rather than opposition: while Chino and Rize may have been more reserved at the journey’s beginning, Cocoa’s carefree personality and energy has left a powerful impression on the two. Chino and Rize are now more open-minded and outgoing than before, seeing Cocoa’s suggestions as an invitation to explore (whereas before, they might have found them mere disruptions). With the character dynamics established firmly, BLOOM is thus free to really begin exploring new directions, as well: as Cocoa, Chino and Rize begin measuring their uniforms, and Cocoa envisions herself ten years later, the question of what lies ahead for everyone in the future is brought up. Cocoa says she’ll handle things as they happen, and Rize states she’s got a game plan. While these are only remarks made in the passing, it foreshadows the theme that BLOOM will be covering; life in the wood-framed town is idyllic and peaceful, but such days do not last forever: as time wears on, the girls will need to look towards their futures as well. For the time being, however, it is still perfectly fine to live in the moment, and BLOOM‘s first episode successfully conveys this to the viewer: that GochiUsa‘s third season is going to strike a balance between having the girls enjoy their time with one another, while simultaneously giving more thoughts into what their futures entail. 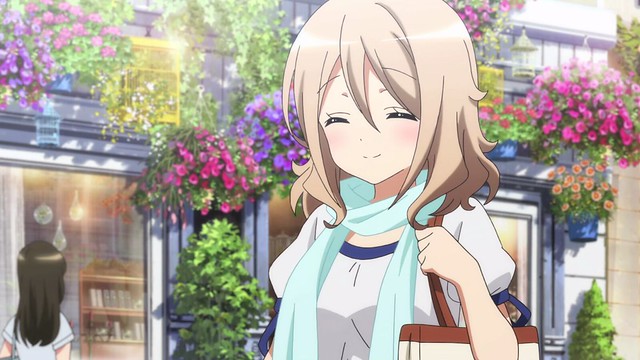 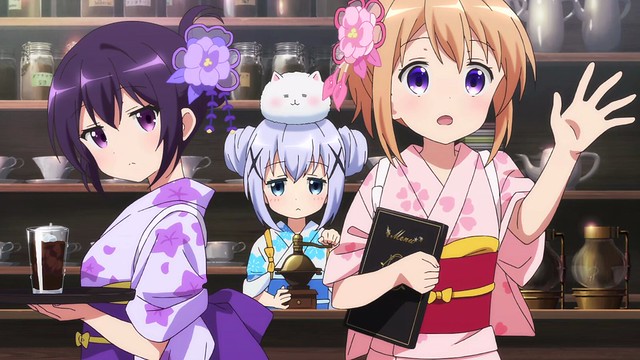 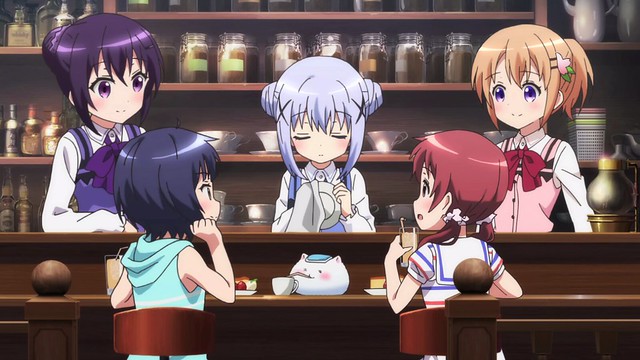 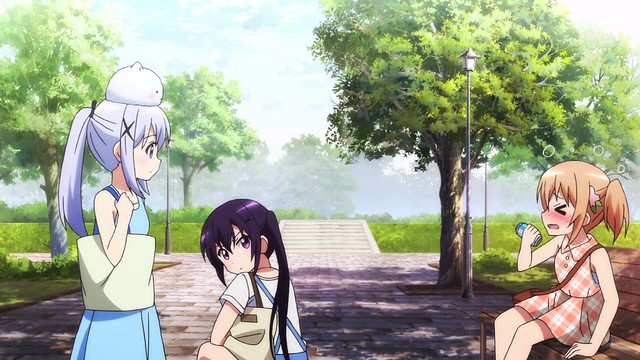 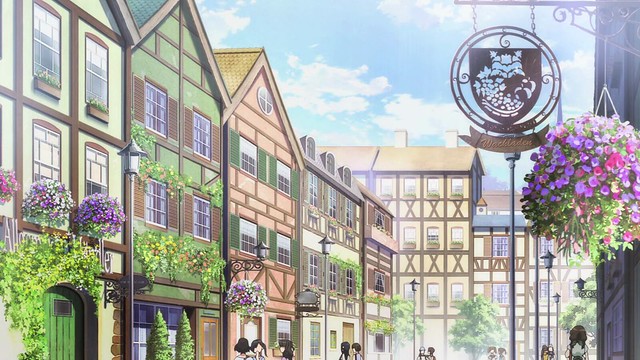 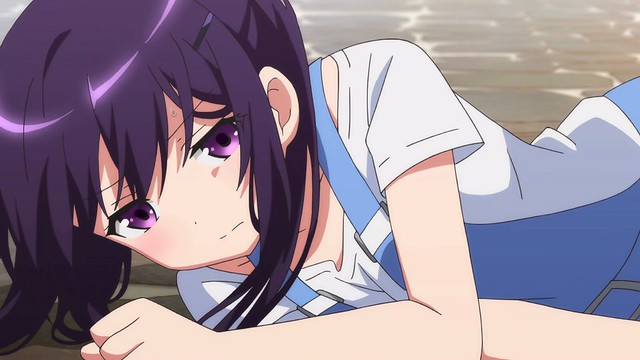 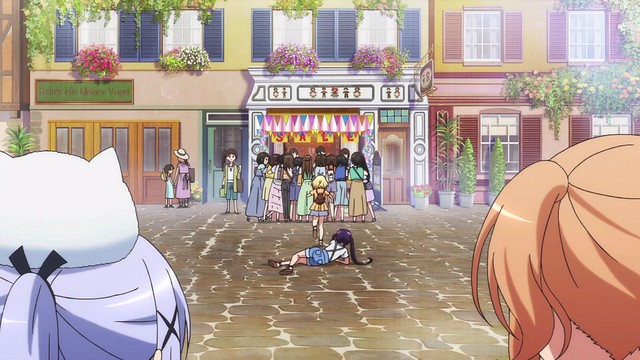 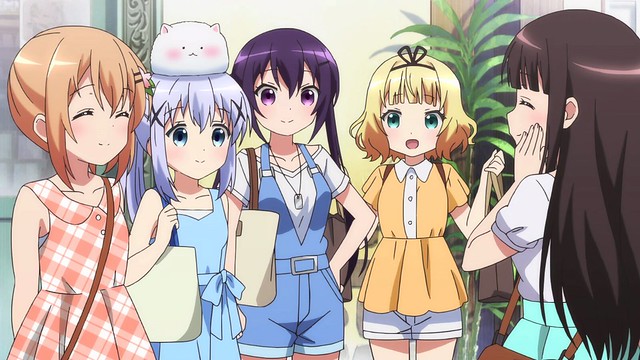 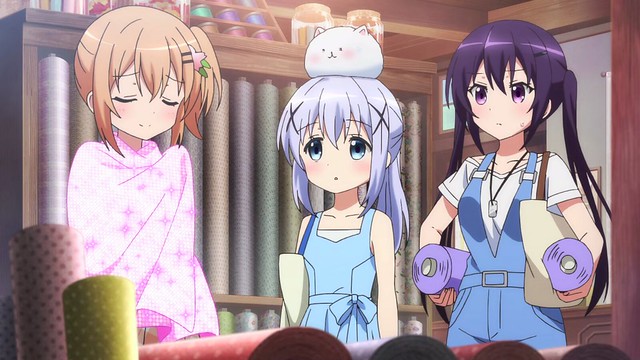 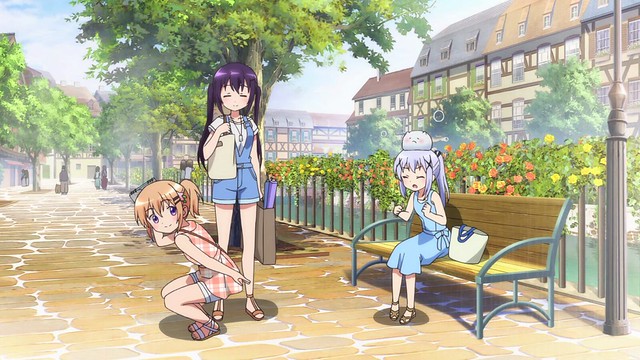 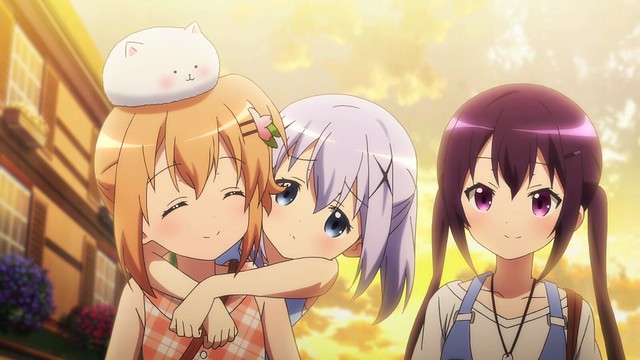 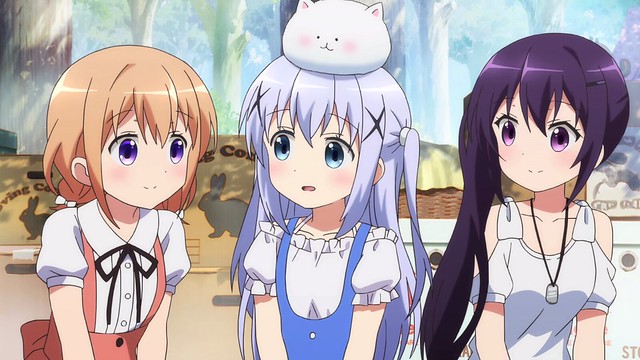 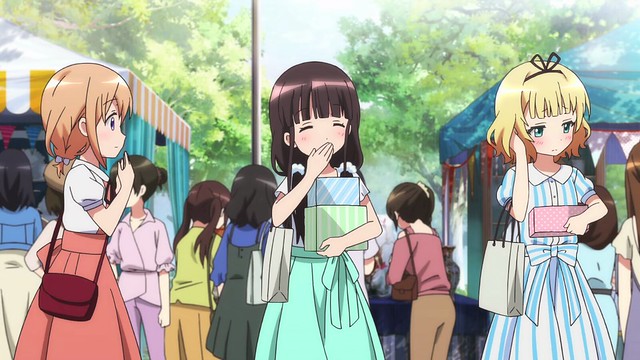 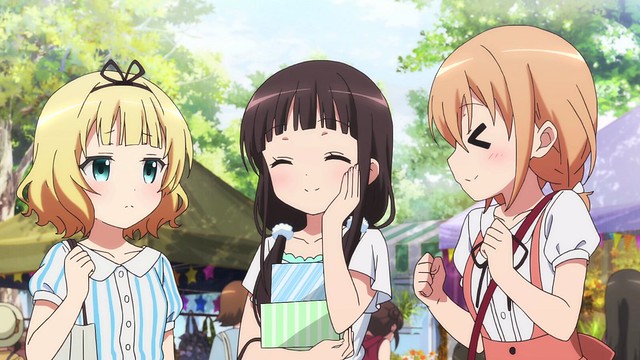 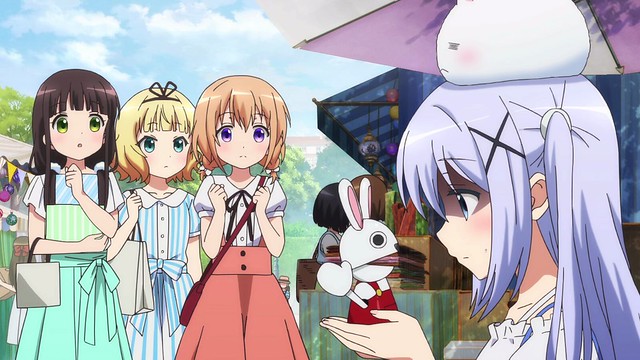 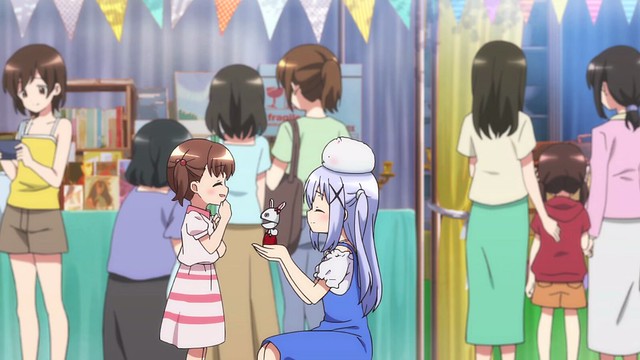 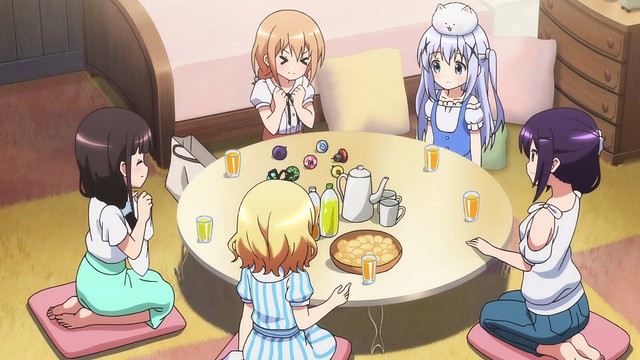 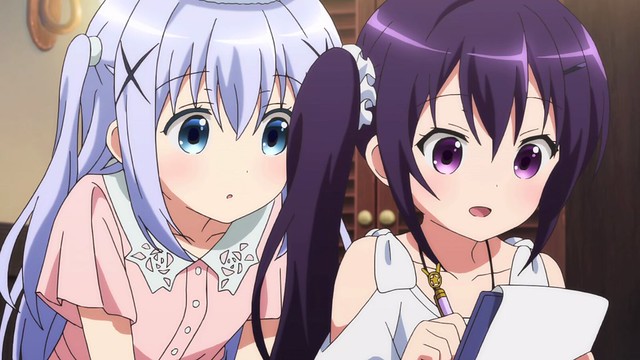 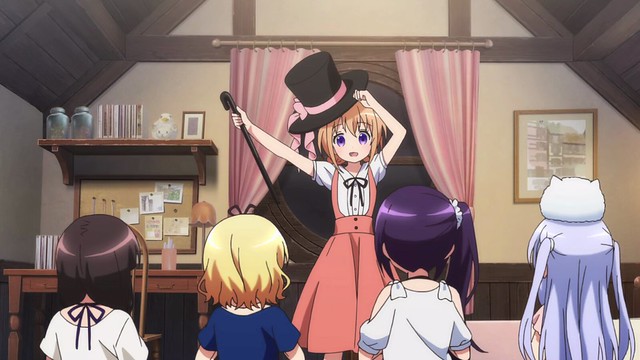 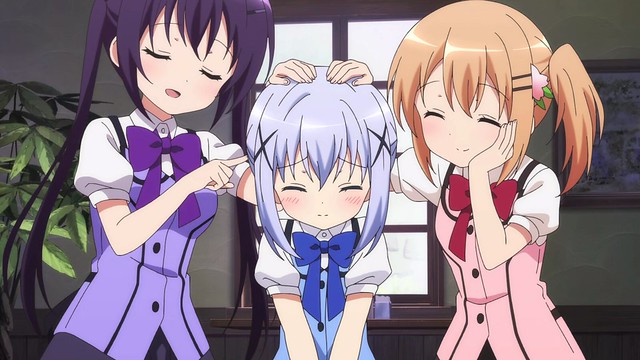 After one episode, it is evident that BLOOM is in good hands from an aesthetics perspective, and so, the viewer can focus on the core of GochiUsa. Out of the gates, BLOOM‘s opening episode is a busy one: unified by Cocoa and the other’s goal of crafting suitable summer uniforms to make working during the hottest months of the year easier, the first episode also sees the girls visit a flea market to sell off old stuff, giving the series a chance to show off more of the wood-framed town and local events. World-building has always been one of the strongest aspects of GochiUsa, and seeing things like crowds at a popular fabric shop or flea market really sells the idea that Cocoa and the others live in a world that has been thoughtfully designed. Together with the fluffy and amusing interactions amongst the characters as they bring magic into the mundane and ordinary moments of everyday life, GochiUsa excels in immersing viewers into Cocoa’s world and the discoveries she makes. The first episode also foreshadows what BLOOM will cover; besides themes of preparing for the future, BLOOM also briefly shows some children dressed up as Lapin, the character to a popular show within GochiUsa. Past and present come together in this opening episode to GochiUsa BLOOM, and in a series that offers so much to consider with each and every episode, I am rather looking forwards to doing weekly write-ups on BLOOM to share with what each episode excels in doing for the viewers.