World of Warcraft: Exploring the Seasons of Azeroth

“To every thing there is a season, and a time to every purpose under the heaven.” —Ecclesiastes

It’s been a while since I last wrote about World of Warcraft, but to put things in perspective, the two and a half months between this post and my last, on Blackrock Depths and the Molten Core, pales in comparison to the fact that my original World of Warcraft post on my old site dates back nearly ten years. After I finished exploring what was counted to be World of Warcraft‘s most iconic endgame mission with a properly kitted-up mage, I decided to spin up a paladin for variety’s sake and go exploring – originally, when I had been on a friend’s private server years previously, I was more focused on doing level-appropriate quests and partying up with friends where they were available. Because this private server had only a slightly accelerated experience rate and standard drop rates, I spent most of my time in the lower level areas of the game, trying to ensure that I was sufficiently levelled to join friends on different events without requiring being resurrected every other engagement with enemies. As a result, many parts of Azeroth were completely unknown to me: I’d spent almost all of my time in the Eastern Kingdoms and hardly ever set foot on Kalimdor, the western continent. This changed when I accepted a quest from Collin Mauren, Retrieval for Mauren – said quest entailed bringing a total of eight Crystalised Scales to him in Stormwind. The quest gave a Spellcrafter Wand, which would’ve been a decent prize at my level, and so, I accepted. This quest saw me travel south, flying over Stranglethorn Vale to Booty Bay: because my friends had once summoned me here for an earlier meet up, I already had the flight path discovered, so I was able to simply pass over the areas I was not the appropriate level to deal with. I subsequently boarded the boat and landed in the Barrens. Eluding Horde guards and patrols, I reached the Stonetalon Mountains and made my way to the Charred Vale to begin collecting the Crystalised Scales.

Later that evening, I’d been requested to help out with an event: one of the local charities was hosting a focus group on trying to understand what the community thought of philanthropy, and since the original attendee was not able to make it, I was asked to go in their stead. The meeting was held in a building just south of the downtown core, and as the light of day turned a deep golden hue as sun set, I answered questions about what it meant to be a philanthropist. While it is commonly accepted that a philanthropist is someone of independent financial means who can donate generously to causes, such as medical research and charities, all of the participants agreed that the desire to help others in need, and contributions at all levels were meaningful. This was the aim of the focus group, and after the meeting ended, I returned home. With the last rays of light still present, I finished the quest, returned to Mauren and got my Spellcrafter Wand, which would serve me for a few levels. While exploring the Stonetalon Mountains, I was charmed with the visual design and aesthetic – the area consists of evergreen forests and steep cliffs, quite unlike the gentle plains of Elwynn Forest or the peaks of Dun Morogh. However, despite my intrigue, I never bothered returning to the Stonetalon Mountains until the private server’s final days – as we were nearing the start of a university term, my friend was looking to shut down the private server owing to the effort it took to run one, but consenting to let me explore being a GM for the final week before our first term began. Armed with the ability to create a level 80 character out of the gates, I summarily prepared a character and took advantage of my permissions to explore Azeroth more freely: during that week, I saw more of Azeroth than I had during the whole of my time on the private server. I collected the screenshots and transitioned smoothly into university subsequently, with thoughts of World of Warcraft fading from my mind as I began focusing on my coursework. 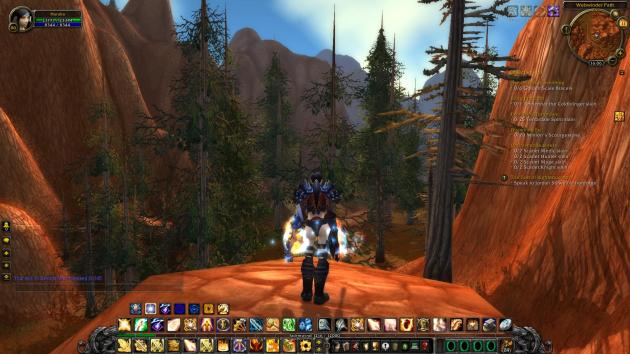 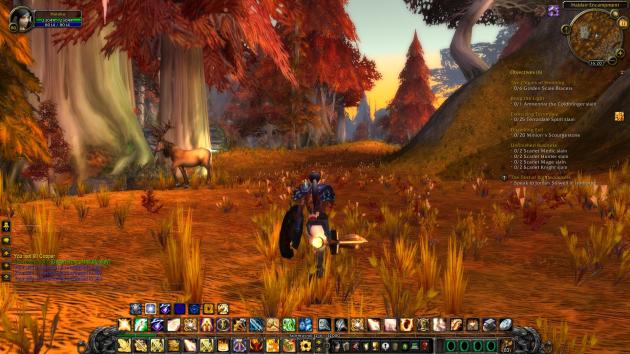 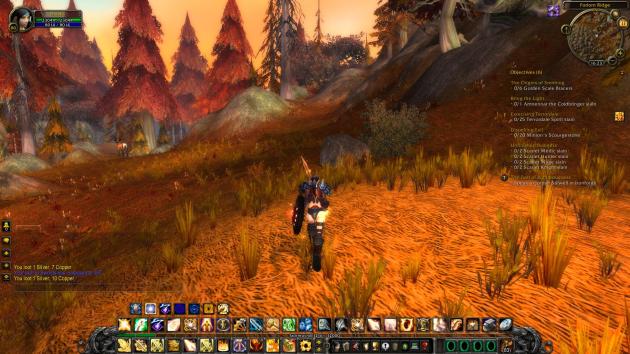 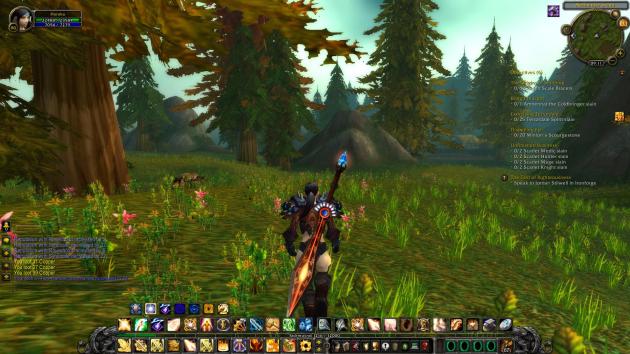 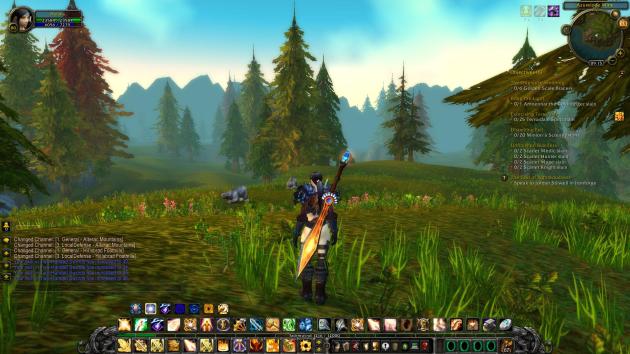 At present, the fact that I have my own private server means I am free to explore some of Azeroth’s more remote, and tranquil places. With no time limit on how long the server will be hosted for, I can explore at my own pace. I had actually travelled to the Stonetalon Mountains with World of Warcraft‘s Starter Edition, but post-Cataclysm, the site had changed beyond recognition. My private server runs Wrath of the Lich King, and as such, I was able to visit the region, precisely as I had remembered it a decade earlier. Beyond treading familiar grounds, I also travelled through much of Kalimdor, discovering a beautiful region called Azshara, where it is eternally autumn. I also returned to Hillsbrad Foothills and Hinterlands, the latter of which is a remote area that remained largely unexplored when my friends and I were partying together on the private server. The Stonetalon Mountains, Azshara, Hillsbrad Foothills and Hinterlands only represent a small selection of places in Azeroth that one can explore en route to reaching the level cap, and looking back, the sheer scope and scale of World of Warcraft is nothing short of impressive: even though my private server means not having the social interactions through partying, trading and raiding as the complete game does, just wandering the different regions of Azeroth was a reminder of the effort and attention paid to detail in World of Warcraft‘s development. Even today, World of Warcraft‘s scale remains an achievement, and as such, it is easy to see why despite the game’s age, Blizzard has opted to continue developing new expansions with expanded lore, gear and exploration for their players – World of Warcraft has aged very gracefully, and even on a single-player private server that is six expansions and twelve years behind the times, I’m still finding new and noteworthy things to do and explore.