“A family is the purest form of love and acceptance.” –Gabrielle Applebury

Yuna is an ardent fan of VMMORPGs, and has played World Fantasy Online religiously for the past three years. Upon signing in one day, she is given a random item to pick, and is awarded a bear gear set. After being returned to the game world, Yuna realises that she’s been reset to level one and is told to enjoy her life in this new environment. Over time, Yuna begins gearing up her new bear gear set and meets Fina, a little girl who is uncommonly mature for her age. As Yuna completes quests, acquires new skills and develops a reputation as a highly powerful adventurer, she also starts learning more about the world she now inhabits, becoming friendly with Lord Foschurose and coming to discover what family is like by spending more time with Fina, her younger sister Shuri, their mother Telmina and Gentz. This is Kuma Kuma Kuma Bear (くまクマ熊ベアー, literally “Bear Bear Bear Bear”, with “Bear” rendered once in Hiragana, Katakana, Kanji and English), which has its origins as a light novel and began airing as a part of the fall anime season. Unconventional in all regards, Kuma Kuma Kuma Bear blurs the boundaries between being a slice-of-life anime about gaming, akin to Bofuri, and a full-on isekai series; its gentle pacing and amusing adventures have been captivating, but until the halfway point, Kuma Kuma Kuma Bear had not given any indication of where precisely the series had intended to go: is the anime about discovery and the inherent dangers of jumping to conclusions, or is it more similar to Bofuri where the goal simply had been to have fun and make friends along the way? After three episodes, I remained uncertain as to where Kuma Kuma Kuma Bear was headed; while I have enjoyed anime that do not have an obvious direction or end goal, I decided to continue watching before I wrote about it, since I could still be pleasantly surprised. Here at the halfway point of Kuma Kuma Kuma Bear, the series has settled into a pattern, yielding insights into what viewers can take away from the series.

Yuna’s remarks about preferring the game world to the real world speaks volumes to her mindset entering Kuma Kuma Kuma Bear: having long preferred her games to real life, Yuna has become very isolated and withdrawn, to the point of seeing no value in real-world activities. Yuna lives away from her parents, and plays the stock market to keep the lights on, but beyond this, does not appear to have friends or family to spend time with. Kuma Kuma Kuma Bear thus starts out as the antithesis to the anime that I typically watch, where camaraderie and family are priceless and things to be treasured. Yuna’s fateful meeting with Fina thus marks the starting point of the journey proper; since Yuna is unable to break down slain monsters for materials, she befriends Fina, who cannot fight but is skilled with materials. A functional relationship soon turns into a personal one; as Yuna spends more time with Fina, she sees how Fina’s family is structured, and how they interact with one another. From terror to joy, families share experiences together, and this is something that Yuna had been lacking up until now. She therefore finds herself drawn to Fina and her family’s well-being, doing whatever she can to help them. After healing Telmina from an illness, Fina and Shuri view Yuna as a member of the family, as well: during a sleepover the three share at the conclusion of the sixth episode, Yuna wonders if this is what it must be like to have younger siblings. At Kuma Kuma Kuma Bear‘s halfway point, then, it would appear that Yuna’s transfer into this world was a deliberate choice, a decision from some higher power to have her learn and appreciate what family is about. The changes that being with Fina and Shuri creates a visible change in Yuna: while she starts her journey content to simply blast monsters for experience points, as Kuma Kuma Kuma Bear continues, the series begins to place a greater emphasis on how Yuna interacts with others. 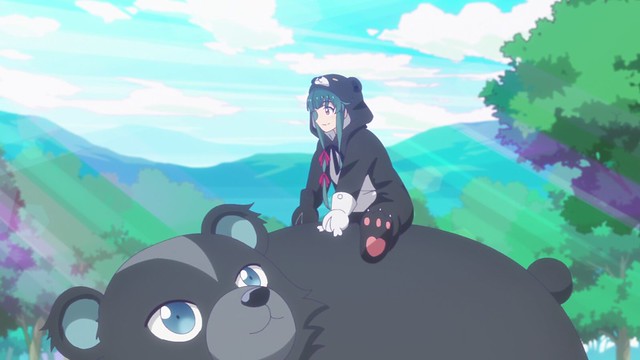 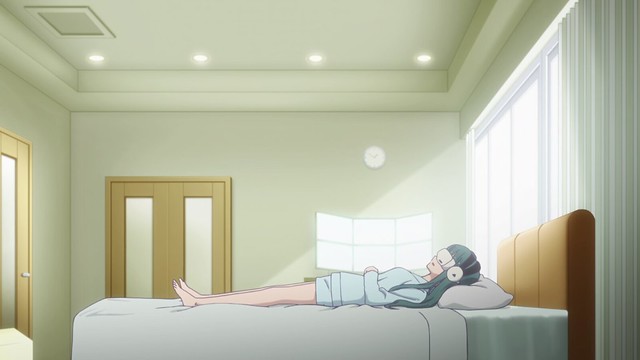 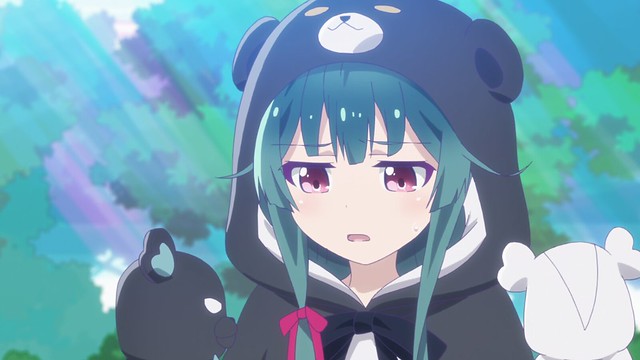 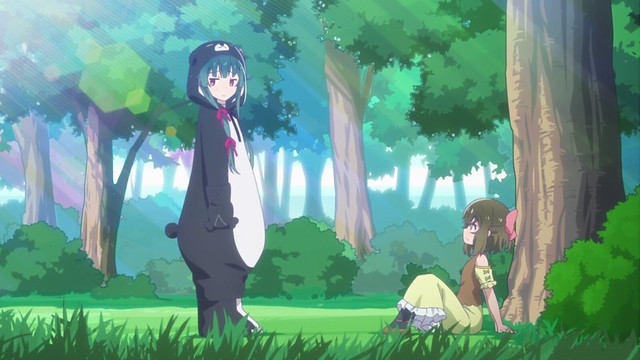 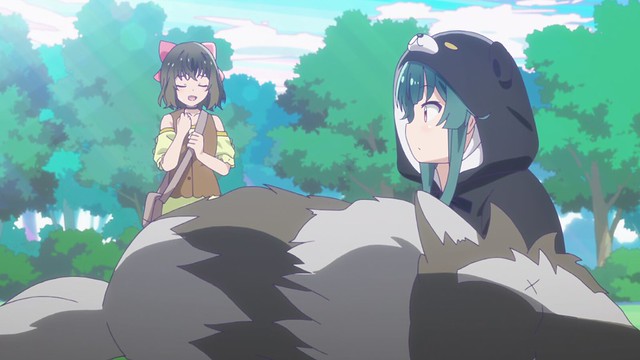 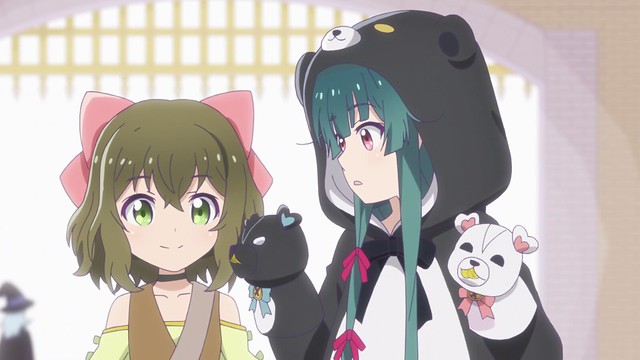 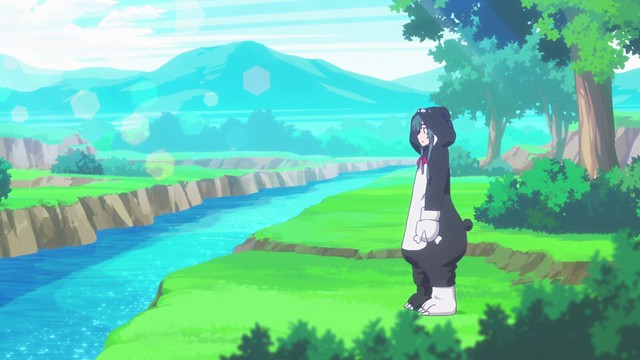 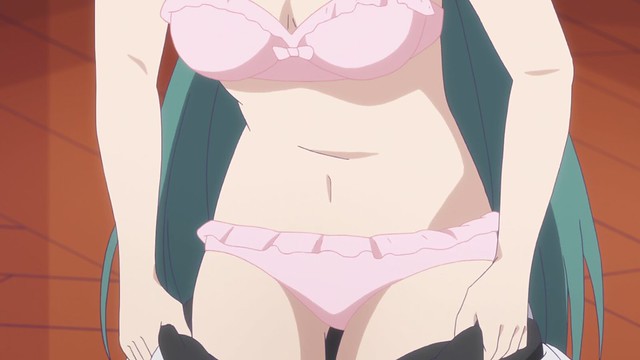 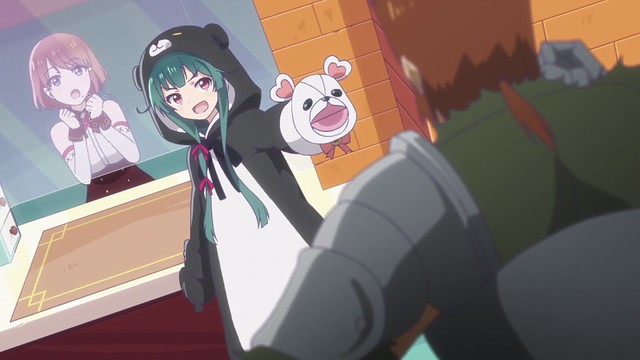 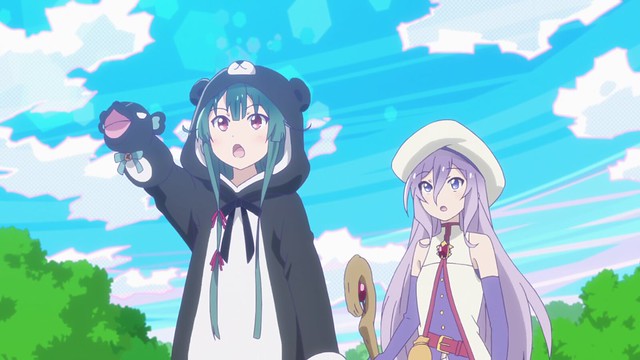 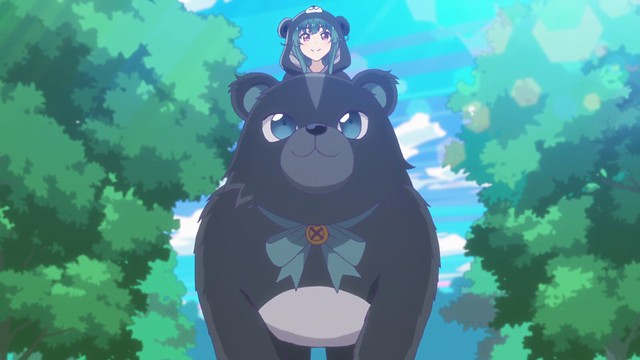 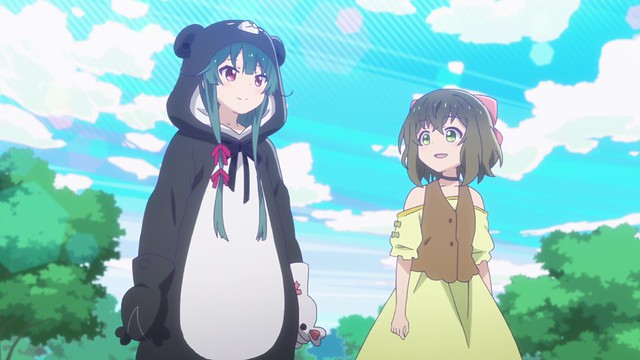 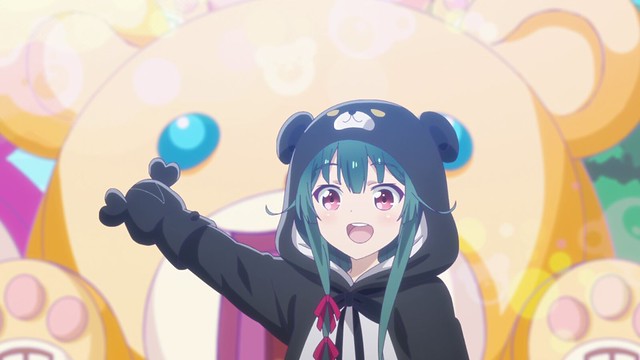 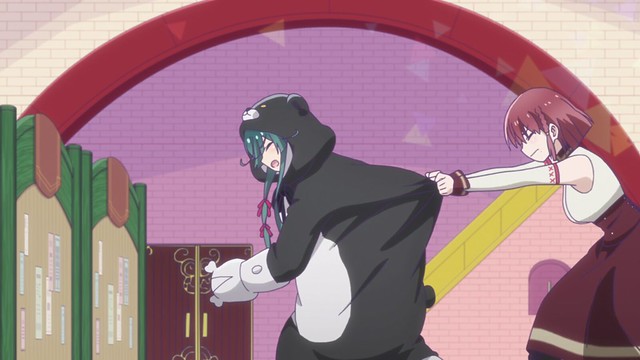 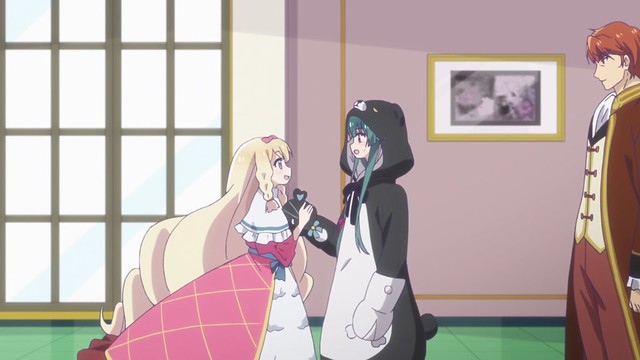 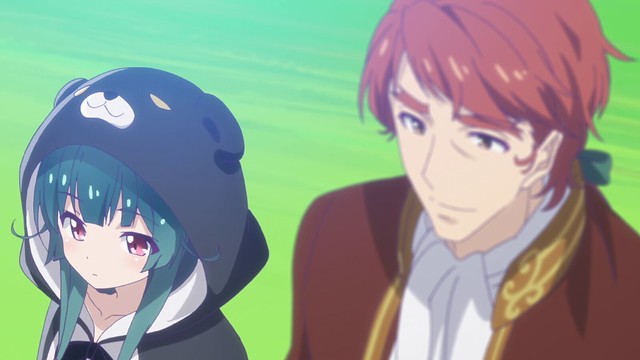 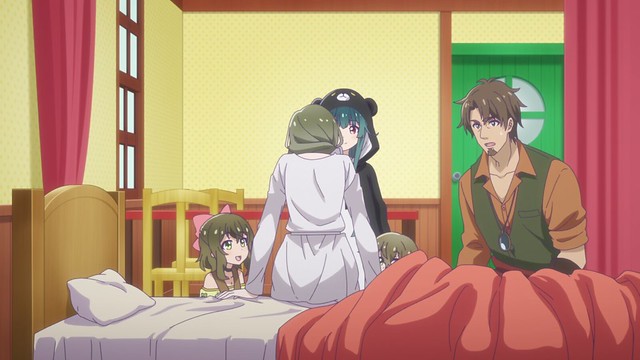 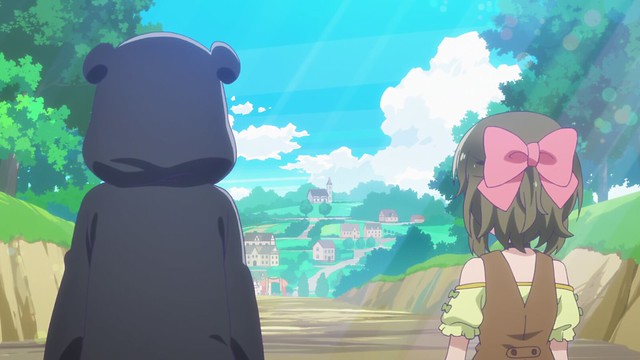 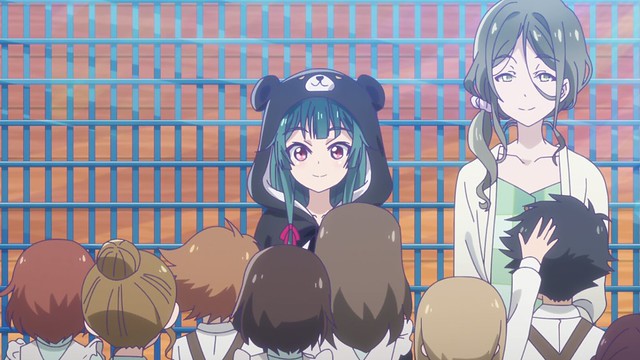 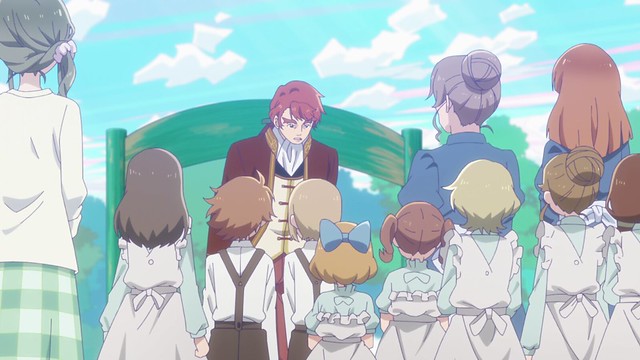 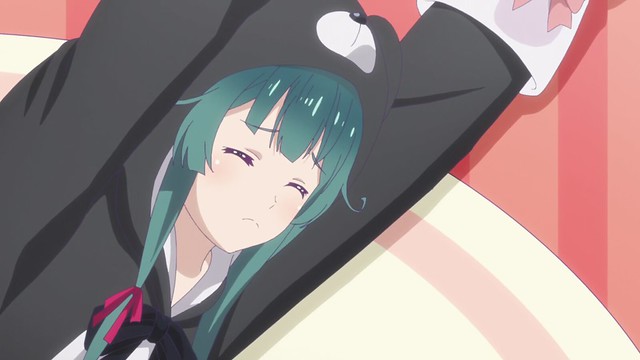 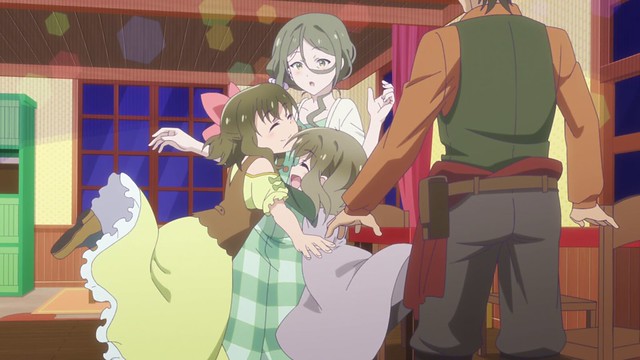 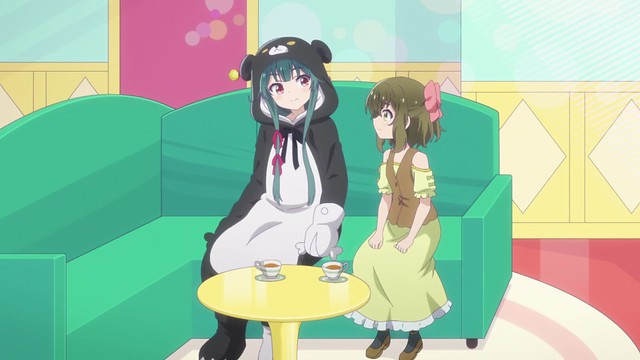 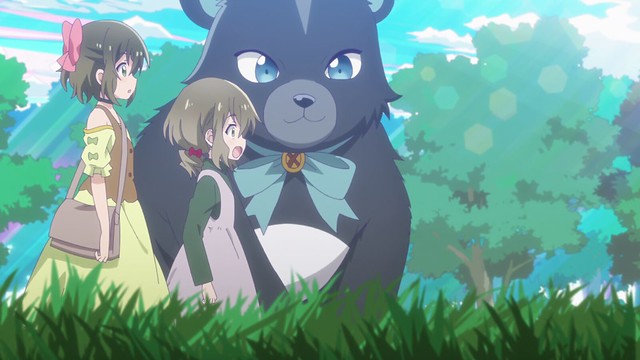 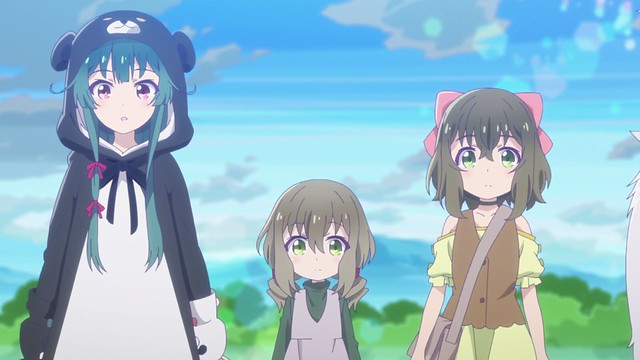 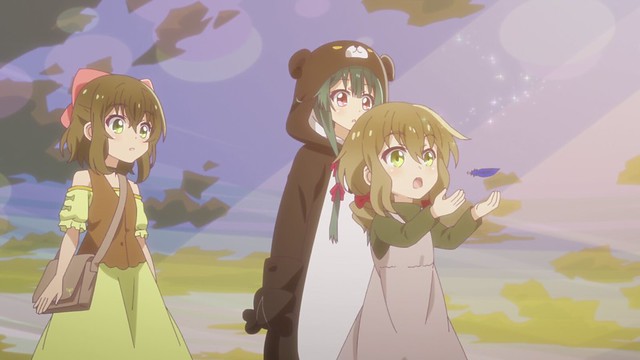 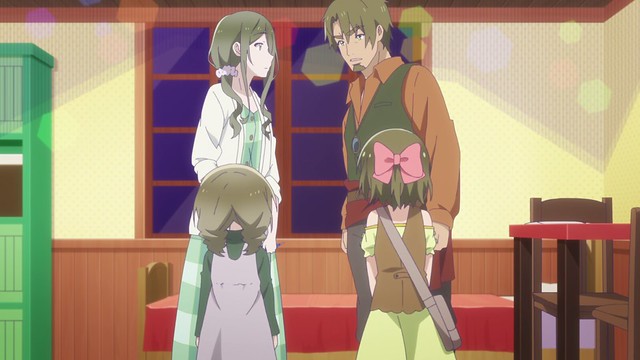 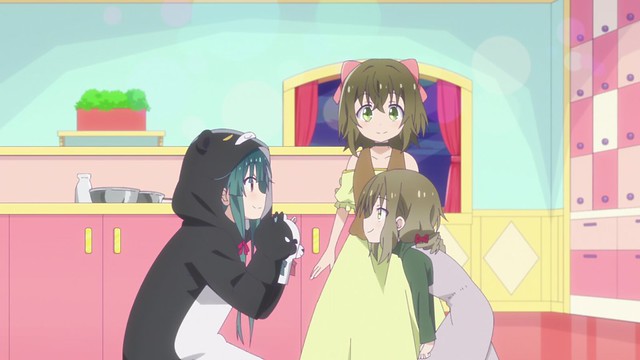 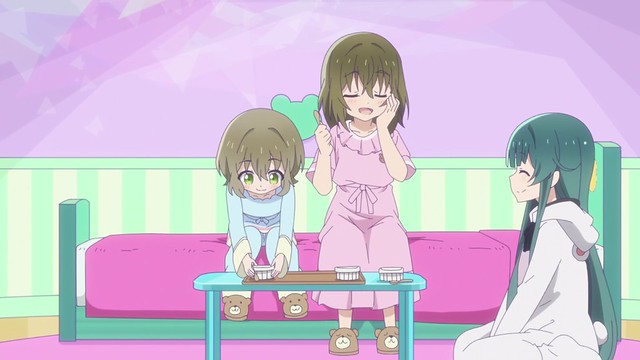 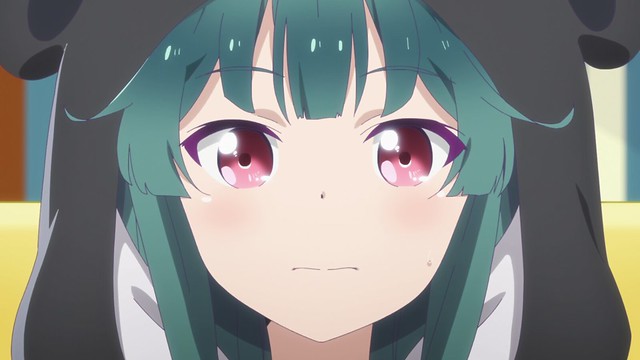 Since we are halfway through Kuma Kuma Kuma Bear, it stands to reason that there is a point behind this unusually-named and unconventionally-structured series, well beyond enjoyable adventures that Yuna and Fina go on in each episode. Anime has the power to surprise, and stories that unfold one way during their beginnings often conceal twists and turns that greatly augment the experience. Kuma Kuma Kuma Bear does appear to be shaping up as such a story: while the idea of an overpowered bear gear set in the hands of a girl who prefers games over all else in life seems ludicrous, Kuma Kuma Kuma Bear has proven to be surprisingly effective in telling its tales insofar, and like Bofuri, manages to be fun because it embraces its set-up to accommodate a very distinct type of storytelling. On top of this, Yuna is a very likeable character: having been there and done that in most gaming scenarios, very little fazes her, and it was fun to watch her casually handle whatever challenges thrown her way. Yuna’s deadpan, stoic attitude means that when things do get serious, viewers have a chance to see more of her personality, indicating that through Fina and Shuri in particular, Yuna is undergoing changes that impact how she views her current world, and likely, her previous world as well. The fifth episode also indicates that in this world, the greatest danger to Yuna lies not in monsters and quests, but dishonest and scheming individuals that can create misunderstandings, as well: as Yuna experiences more of the world with her bear gear set, it is likely that she will learn a great deal about the comings and goings of any society, and therefore, come to appreciate what the people in the real world mean to her, as well.