7 Comments Posted by infinitezenith on December 9, 2020

“Fullness of knowledge always means some understanding of the depths of our ignorance; and that is always conducive to humility and reverence.” –Robert Andrews Millikan

Operation South Winds begins. The 501st are loaded onto a B-17 and flown out to Berlin as a part of a larger strike force, whose objective is to first neutralise the massive cloud surrounding Wolf using thermobaric explosives. Once the bombs are dropped, the 501st deploy into the battlefield and are surprised to see their foe’s appearance: a seemingly-simple Neuroi with its core exposed. However, when wall-like pieces begin dropping from the skies, the Witches are shocked to see the Neuroi land on Pariser Platz near the Brandenberg Gate. Wolf begins to manufacture smaller drones that assemble into bomber type aircraft, overwhelming the Allied B-17 bombers. Command orders a retreat, and the Witches are tasked with escorting the surviving bombers to safety. Yoshika is ordered to immediately return to base, and Shizuka manages to convince her to do so, before destroying a bomber-type Neuroi on her own. The operation is thus unsuccessful, but the media reports that things are “just getting started”. In order to keep her as their ace-in-the-hole against Wolf, Yoshika is grounded for operations. When a large bomber-type appears, the 501st sortie to engage it, but Shizuka is injured during combat, and the Neuroi itself prepares to ram the Kiel facilities. Against her orders, Yoshika deploys a massive shield that prevents the Neuroi from hitting the ground, depleting her magic in the process. Charlotte manages to rescue Shizuka, and Sanya destroys the Neuroi, but in the aftermath, Yoshika has fainted, and Shizuka is devastated, before succumbing to exhaustion herself. Breaking tradition from earlier Strike Witches episodes, Road to Berlin opens the throttle with a preliminary attack on the Neuroi hive over Berlin, and unsurprisingly, the Witches’ first attempts are unsuccessful – they allow themselves to let their guard down, and consequently, are met with failure as Wolf reveals that it has a few tricks of its own.

All of the themes come together from earlier episodes as the Witches take on this overwhelming foe in the episode’s first half, and even as they are caught off-guard by Wolf’s power, they manage to withdraw safely; by now, Yoshika’s seen Shizuka grow enough to trust her; however reluctantly she is, she accepts her orders and returns to base ahead of the others, and Shizuka proves herself after defeating a powerful bomber-type Neuroi on her own. The episode’s second half is more sobering: Yoshika’s magic is counted as a bit of a secret weapon, to be held in reserve for the next attempt at stopping Wolf, but when a Neuroi threatens the entire operation by attempting to crash into Kiel, Yoshika sacrifies her power to save the base and the others. This particular action forms the crux of this week’s discussion – it is inevitable that some viewers, with a different approach that my own to military-moé anime, will remark that Yoshika’s actions are selfish and will cost the 501st severely on their next run. I counter-argue that Yoshika’s actions at Kiel are not only appropriate, but necessary. Had Yoshika followed her orders not to deploy, the 501st would have lost Kiel entirely, along with its matériel and two of the theatre’s top brass. The damage done here would have set Operation South Winds back so severely, the 501st would have been unlikely to have the resources to mount a second attack before Minna and Gertrude’s ability to fight disappeared. Yoshika’s decision came at a great cost, but in the end, this decision was a necessary evil: by defying orders and using her magic to prevent the Neuroi from hitting the ground, Yoshika has single-handedly saved the other European forces and the 501st’s resources, allowing them to fight another day. Even if she cannot immediately participate in the next counterattack, history has shown that the 501st are resourceful and determined: Patton has also indicated they have access to secret weapons of their own to assist, creating a situation where the 501st will only need to hold out in the next episode long enough for Yoshika to rejoin them and contribute to the team effort which sees the 501st triumphant over the skies of Berlin. 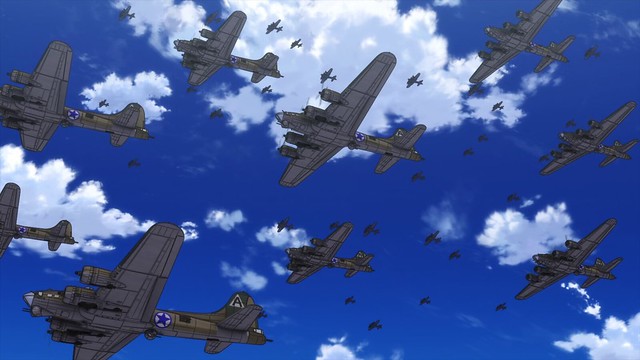 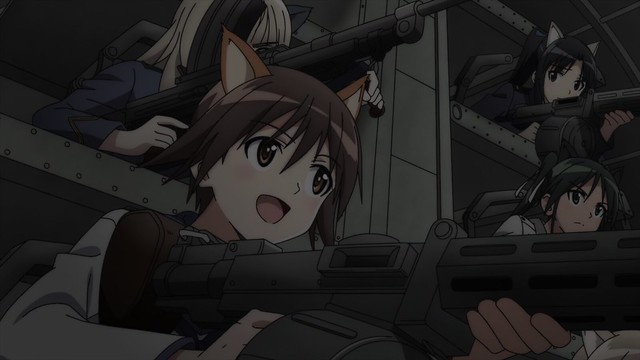 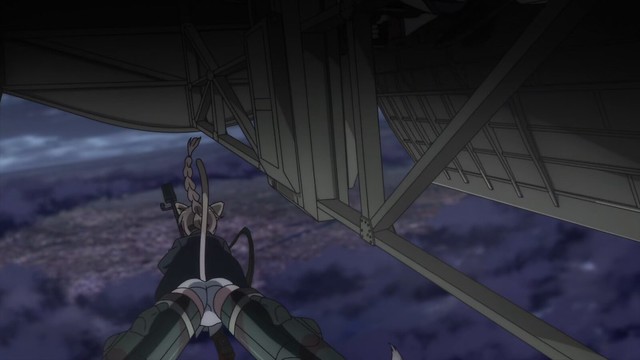 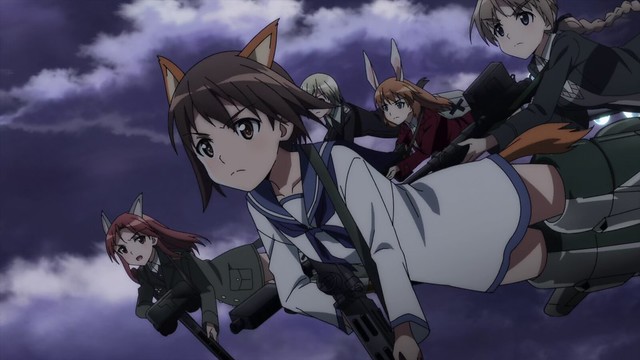 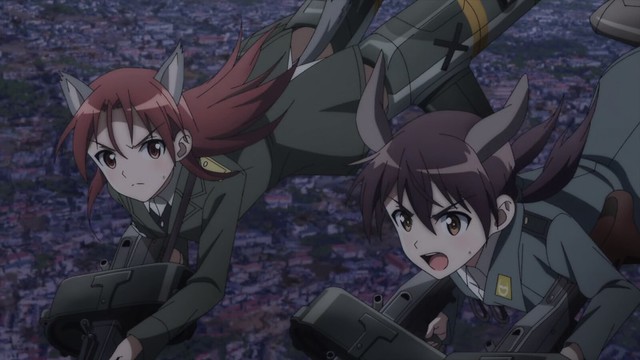 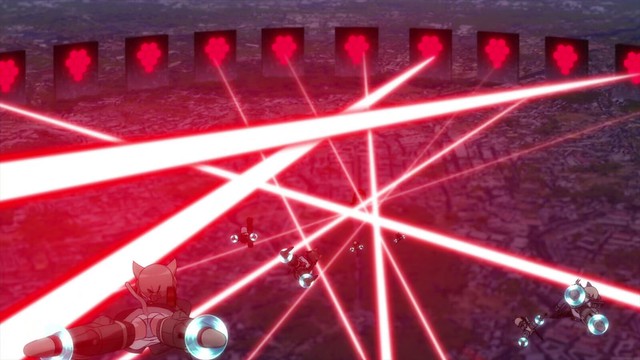 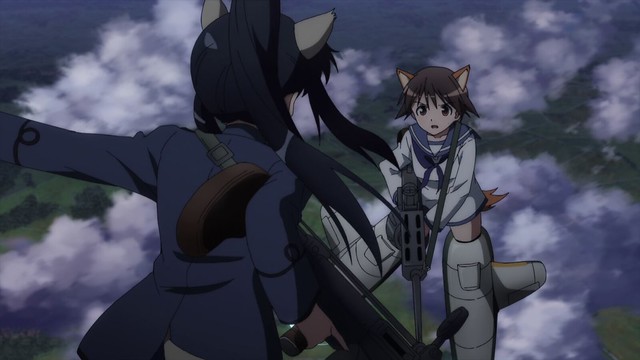 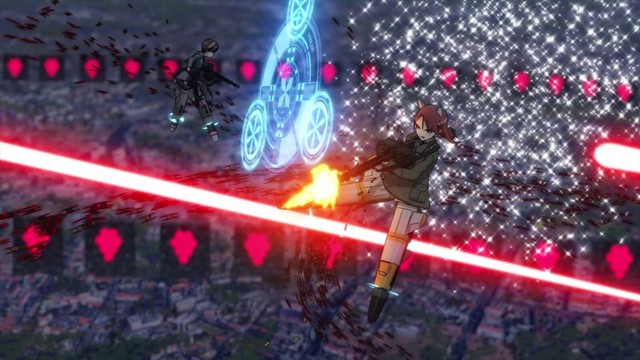 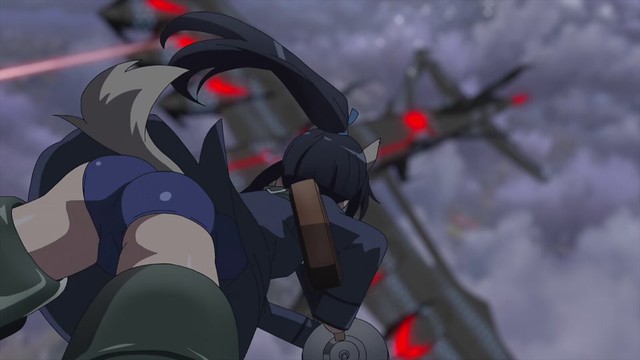 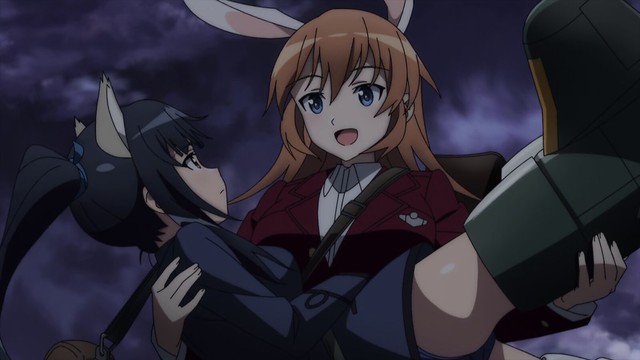 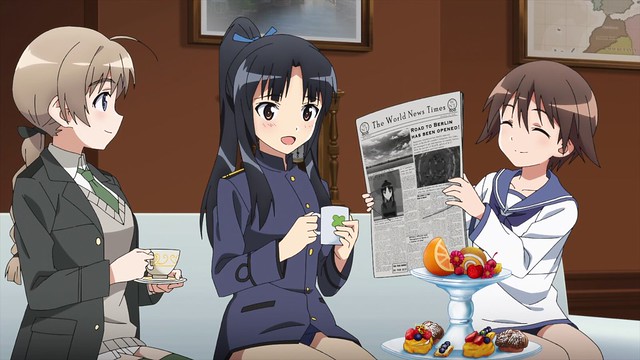 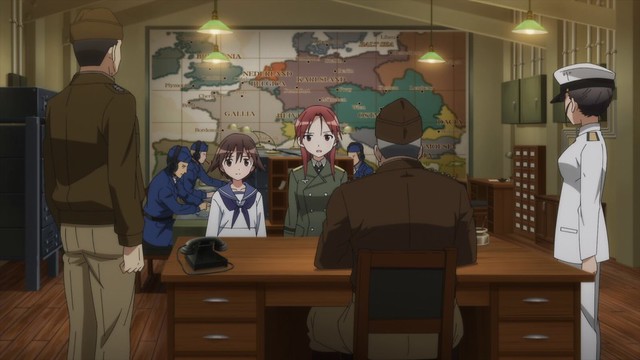 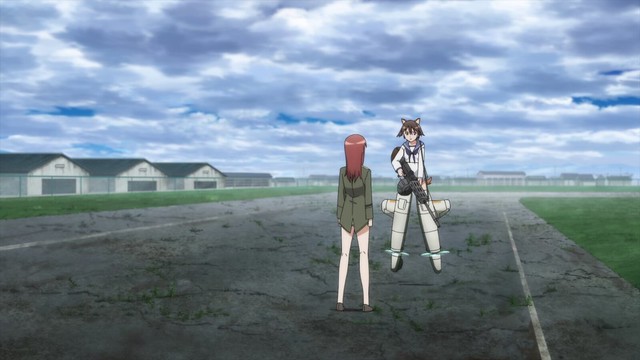 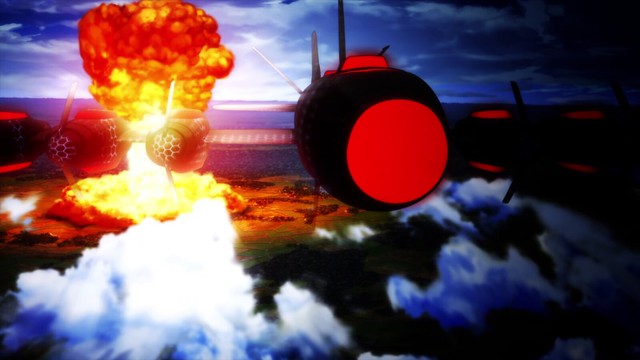 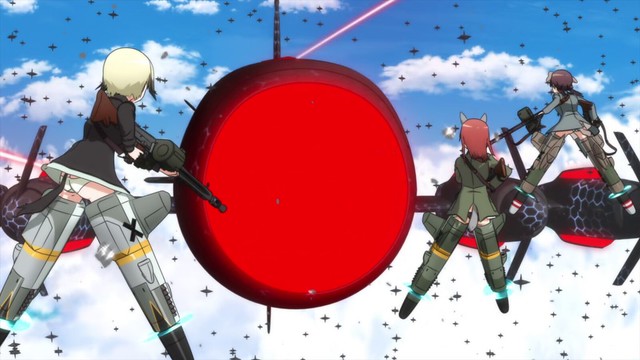 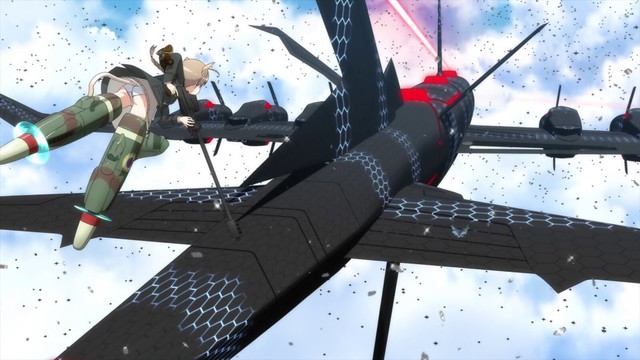 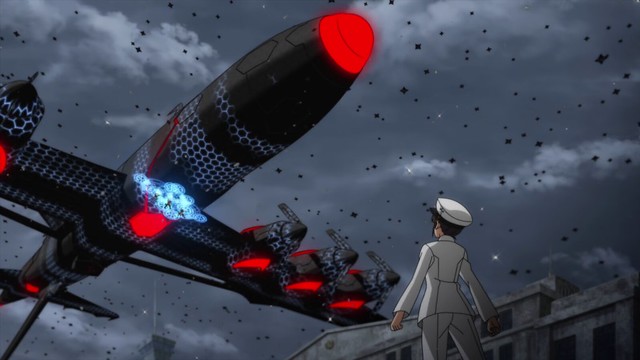 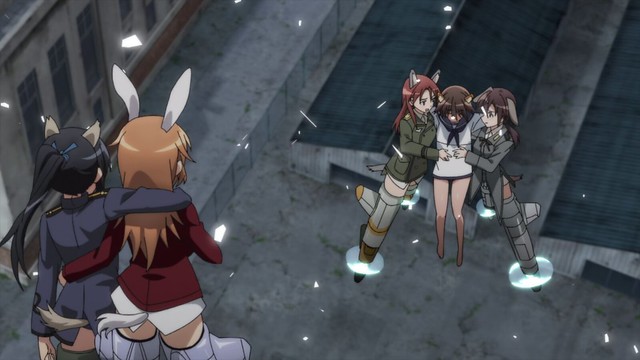 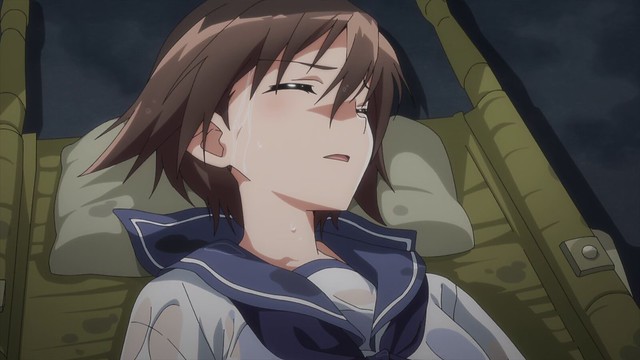 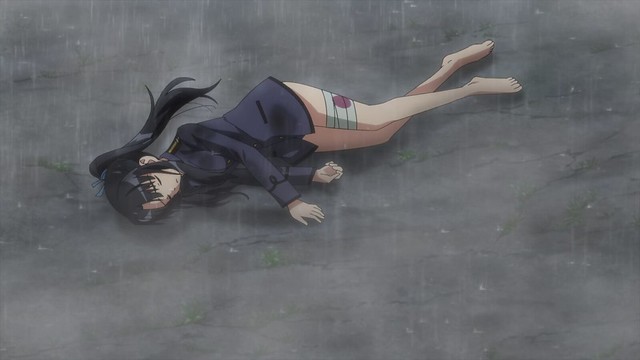 This tenth episode of Road to Berlin marks a considerable departure from the other Road to Berlin episodes, being much more serious in nature and lining up with the sort of atmosphere that the earlier promotional materials suggested that this season would take. However, the series’ themes have always been very open, and outcomes have always been in such a way as to align with these themes. Consequently, although Strike Witches has always tended to be predictable, the series’ strengths lie in its execution. With this in mind, along with Yoshika’s actions this episode, I will openly (and uncharacteristically) state that any arguments against Yoshika’s choice in this episode are invalid. I’ve been around the block long enough to know understand and accept how Strike Witches presents its themes. However, for as long as I’ve been watching Strike Witches, I’ve seen some who feel compelled to critique and challenge Yoshika every step of the way. This grows wearisome and comes across as highly immature. A few names from AnimeSuki immediately come to mind, and while I have no idea what results in this behaviour, whether it be because these individuals feel the need to show they’re cleverer than the writers or are better-versed in good storytelling than other viewers, one thing is apparent: complaining about Yoshika’s decisions as though one knows better is not going to change the themes in Strike Witches, nor will it alter the outcome in Road to Berlin. Simply, claiming Yoshika did the wrong thing this episode would be an untenable position: it is pointless to argue against Yoshika’s choices, since the alternative is seeing Kiel wiped out, sending the 501st back to square one. While I normally am very open to alternate opinions and perspectives, for Road to Berlin, the combination of the series’ reputation and past performances, coupled with the fact that those who usually argue against Yoshika have been very vocal, but otherwise unconvincing means that here, I will make an exception; such opinions aren’t worth paying attention to. Road to Berlin‘s tenth episode makes this explicitly clear: from what has been shown up until now, Kiel was a critical asset, and Yoshika acting in any other way would invalidate everything that Road to Berlin has been working towards all season.