4 Comments Posted by infinitezenith on December 12, 2020

“Horsemen, hmph! I wish I could muster a legion of Dwarves: fully armed and filthy!” –Gimli, Lord of the Rings: The Two Towers

Sharo is shocked to learn that Cocoa is working at Fleur de Lapin: it turns out that with Christmas coming, Cocoa’s looking to earn a little extra cash so she can get gifts for all of her friends. However, Cocoa hasn’t stopped here: from the crêpe stand to a local bookstore, Cocoa’s accepted postings and accompanies Sharo on her jobs. While initially annoyed, Sharo comes to admit that having Cocoa around is actually quite nice, and at the bookstore, it turns out things are so busy because, Aoyama’s doing a book signing. Here, Cocoa and Sharo help to promote the event, and run into Rize, Maya, Megu and Chino, who are here to congratulate Aoyama and Rin. After the book signing, the girls decide to do a gift exchange, but since things could get pricey, Aoyama suggests a secret Santa instead. Later, Chino sets off to pick up Cocoa from work: she’s helping out at a roasted chestnut stall and with the weather looking a little rainy, Chino decides to bring an umbrella. Along the way, she runs into Sharo and Chiya, as well as Rize, Maya and Megu. Feeling that the Christmas spirit is in full swing in town, Chino finds Cocoa, and they head home together, despite Chino having lost her umbrella earlier. When they return to Rabbit House, they are surprised to find a queue in front of the door. It turns out that a special piece Aoyama and Rin had put together was published, and with Rabbit House busier than ever, Cocoa resolves to help out as best as she can. However, exhausted from the day’s events, she falls asleep after getting changed. Chino tucks her in and prepares to switch back over to the standard Rabbit House uniforms, noticing that Cocoa had finished the uniforms for Chiya and Sharo. With Cocoa spent, Chino decides to call Chiya and Sharo and ask a favour of them. With this tenth episode and the imminent arrival of Christmas, things have certainly shifted into a very festive mood prior to the winter holidays, providing the prefect time to show how Cocoa’s been a positive presence in everyone’s life, and how a year later, this influence is visibly felt.

The tenth episode continues on with the interactions between Cocoa and Sharo in its first act; of everyone, Sharo’s always been the coolest towards Cocoa. However, Cocoa has always moved at her own pace, treating everyone with kindness and warmth, even if she does drag them into assorted adventures and misadventures alike. In seeing Cocoa’s warmth, Sharo has also become a bit more open, and more confident in hanging out with Rize. However, until now, she’s always struggled to properly thank Cocoa and accept that behind Cocoa’s seemingly absent-minded mannerisms, is someone who is willing to get things done. The companionship that Cocoa brings to the table thus creates a change in Sharo’s way of thinking, and this tenth episode establishes that Sharo is indeed thankful that Cocoa is around. Moreover, with Christmas on the horizon, Sharo now has a perfect chance to express her appreciation for Cocoa with the secret Santa exchange. The second act primarily deals with the idea that Chino’s beginning to feel a little left out as her friends each prepare for their futures and immerse themselves in the tasks at hand. However, even if many of her friends are unavailable, Chino now has enough of a group to be able to ask for assistance where needed. When Rabbit House gets busy during the winter season, seeing how Cocoa had completed the other Rabbit House uniforms reminds Chino that she can now call upon Sharo and Chiya to help out; Chino’s always had to deal with feelings of loneliness since Saki’s passing, but Cocoa’s influence has permeated virtually every aspect of her life, bringing new friends into the picture. As such, this tenth episode serves to demonstrate that Chino’s never really alone. 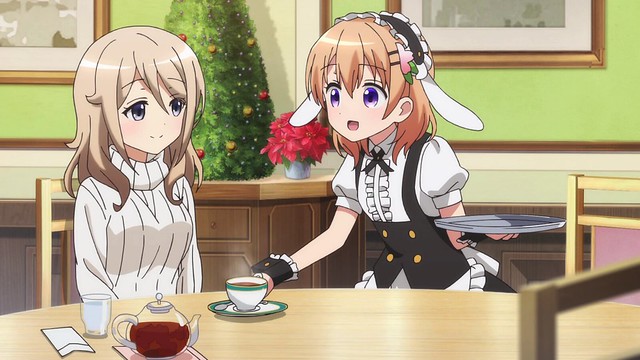 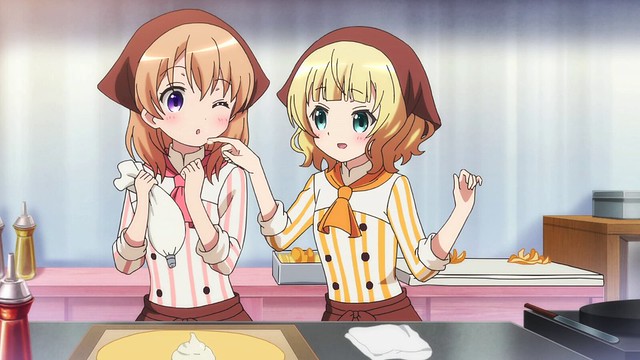 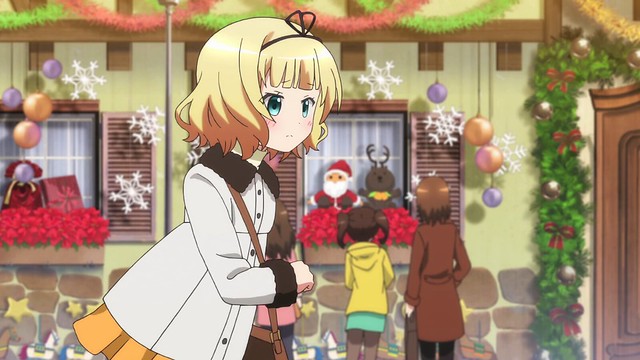 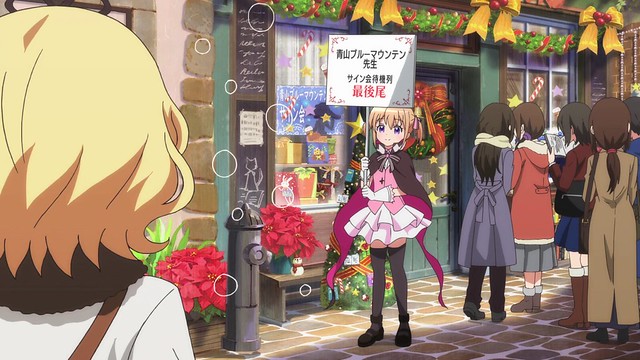 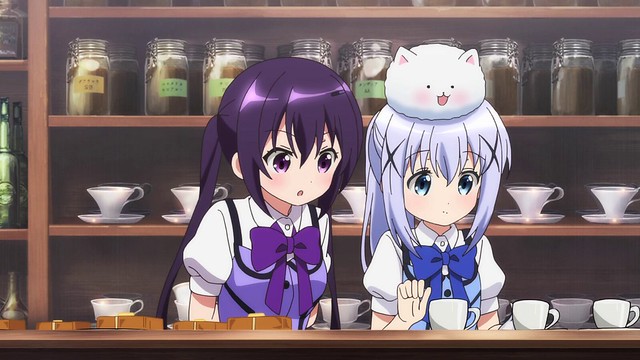 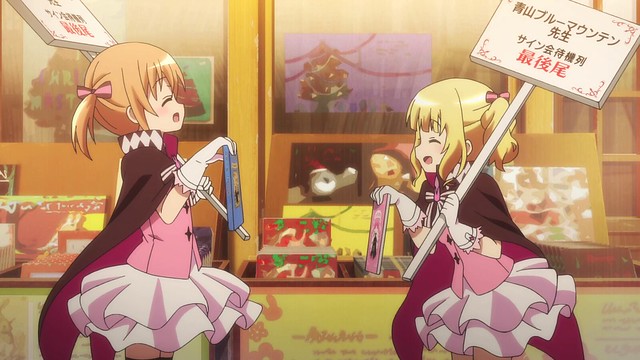 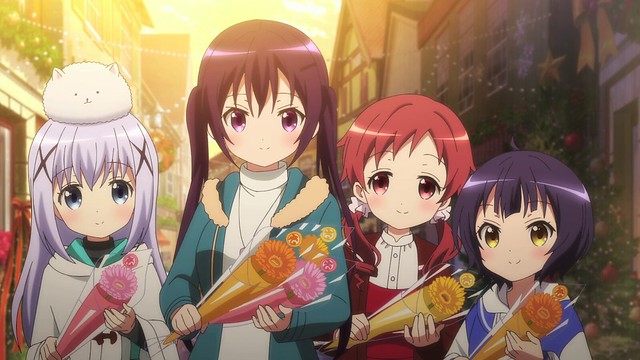 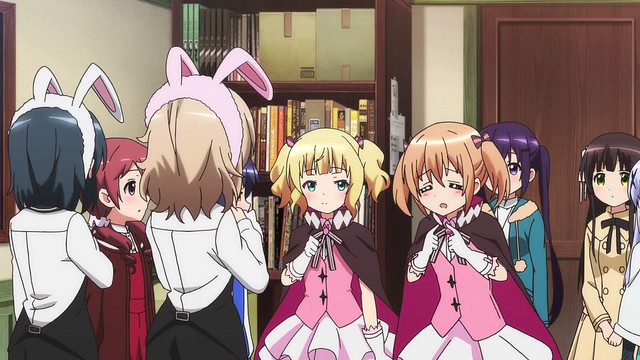 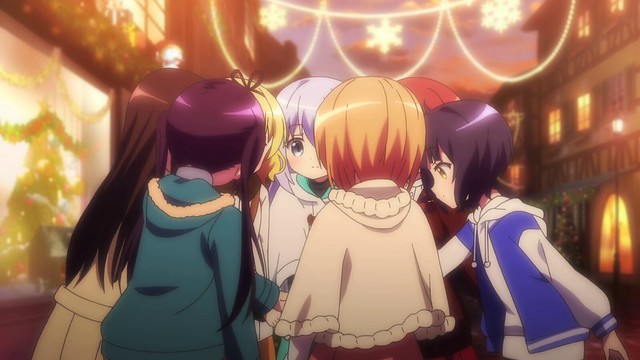 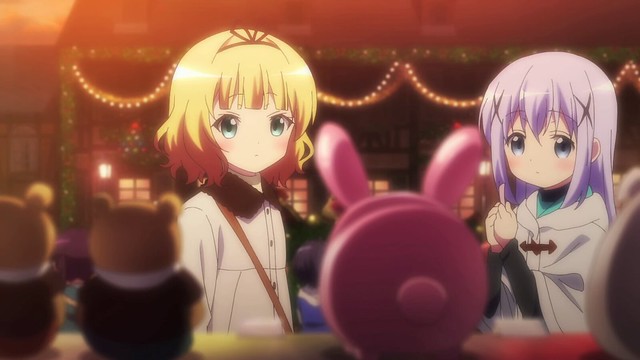 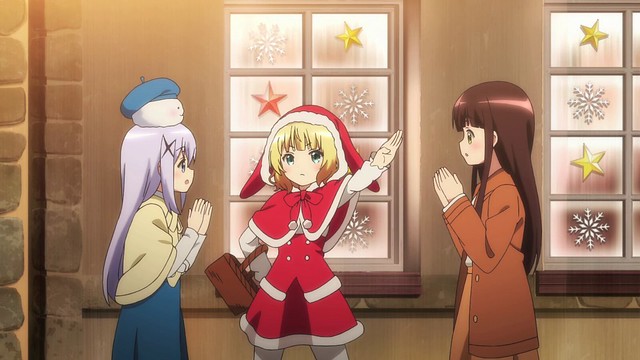 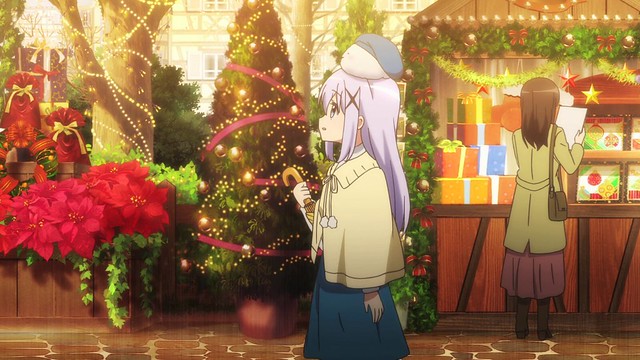 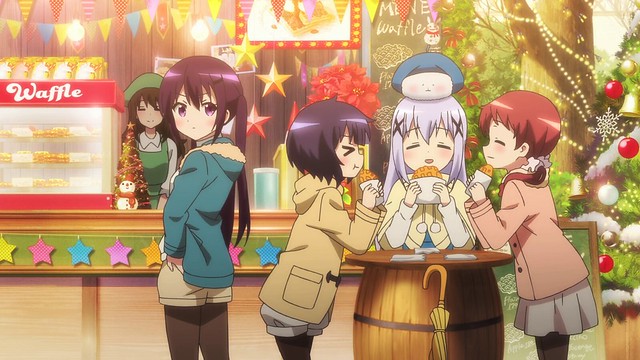 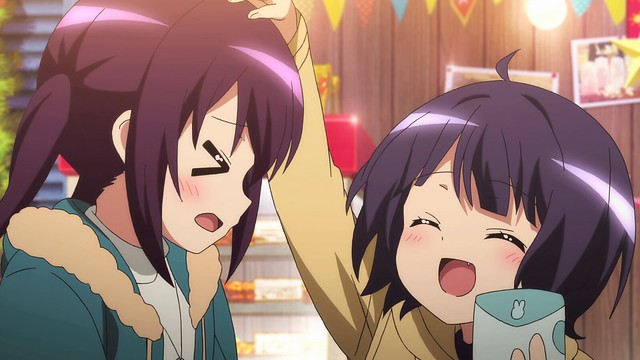 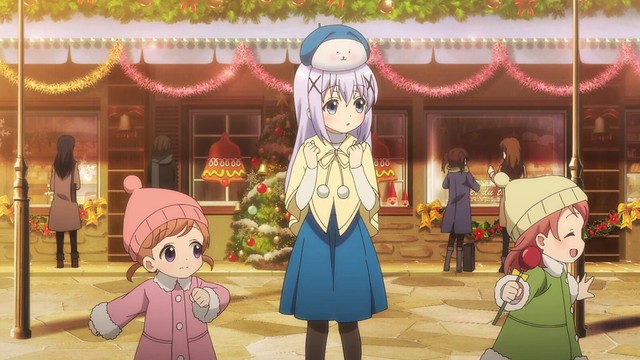 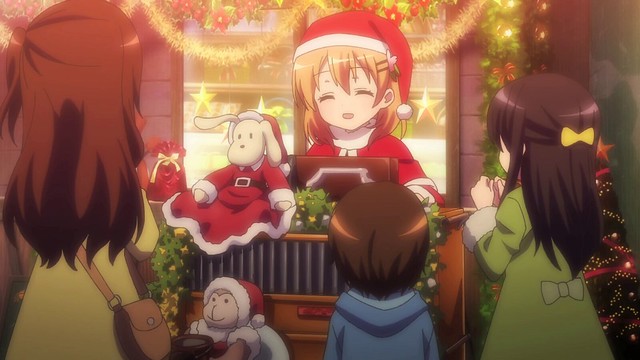 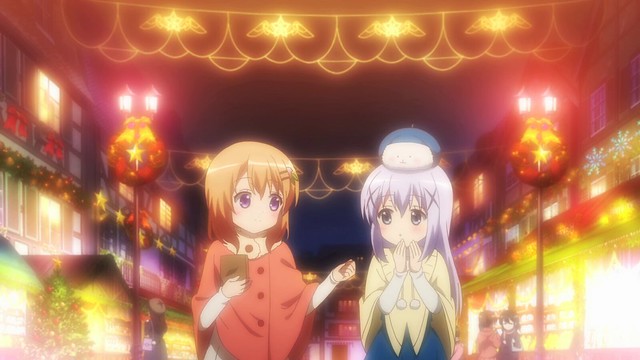 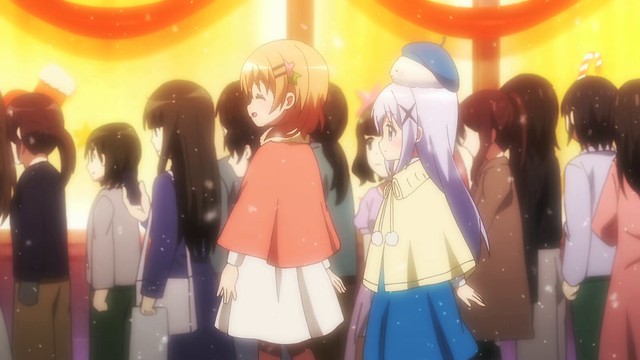 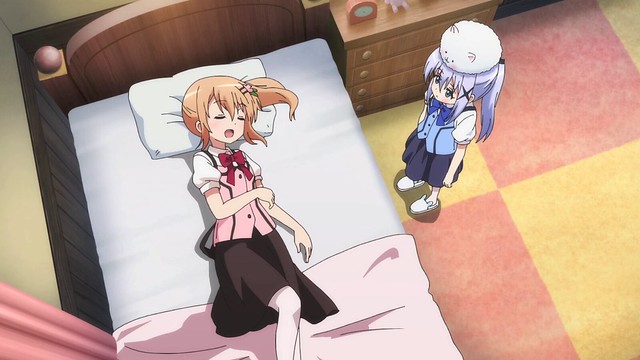 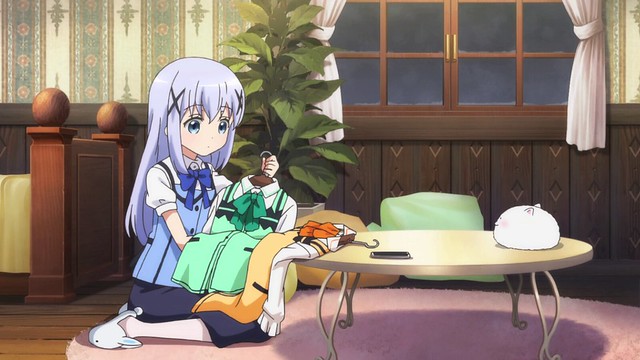 From a literary standpoint, the tenth episode is the surest sign that GochiUsa has matured as a series: during GochiUsa‘s first season, the flow of time was a lot less consistent, and things jumped right from Rize taking Chimame to the pool to Christmas. By BLOOM, the series is a lot more gradual in its portrayal of events surrounding Cocoa and her friends. Christmas in BLOOM does not sneak up on the viewers, and themes that the first season’s Christmas episode explored are now applied to all of the characters. This time around, the festivities surrounding Christmas are presented much more vividly. The wood-framed town is more ornately decorated, featuring loving frames of Christmas lighting and decorations on every building and lining every street. The Christmas market feels a bit livelier, with crowds that are doing their Christmas shopping and taking in the unique atmosphere at this time of year. Children run along merrily with candied apples, adding a joyful tenour to the air. In general, the sense of anticipation for Christmas is fully captured through the visuals, creating a tangible sense of holiday cheer that surpasses even what the first season’s Christmas episode had conveyed. With the entire town excited for Christmas, the festivities are visibly felt, and even Chino becomes caught up in the moment, stopping to enjoy a brief conversation with Chiya and Sharo before joining Mega and Maya in hassling Rize for waffles when she runs into them. Building upon the lessons and stories of earlier seasons, BLOOM is really able to showcase how everyone’s changed since Cocoa’s arrival in town, making use of the seasons and holidays, as well as more mundane, ordinary moments to create a very compelling, immersive story about finding joy in both the unremarkable and the extraordinary.