2 Comments Posted by infinitezenith on December 16, 2020

“If we cannot pass over the mountain, let us go under it.” –Gimli, The Lord of The Rings: The Fellowship of The Ring

Yoshika reawakens to learn that her magic will take around ten days to be replenished. She accompanies Minna to a meeting where Patton and Bradley attempt to persuade the other members of command to push things back ten days, but is meet with vehement resistance. Meanwhile, Shizuka is devastated that Yoshika’s unable to fight, and when she learns that a custom Shinden unit will have to be returned to storage as a result, she is told that the plan was classified. Unable to express how she feels about Yoshika, Shizuka dissolves in tears. Before the new operation begins, Minna explains that the plan to take back Berlin has changed in light of the Neuroi’s new deployment pattern: the military have procured a Ratte, and intend to use it to smash the walls that the Wolf hive has erected around Berlin. The Witches are to provide air cover and support for the Ratte. On the day of the operation, Yoshika makes a special request, and the 501st sortie. While the 501st keep the Neuroi drones busy in the skies above, the Ratte proves its worth during combat: besides shrugging off Neuroi beams, it is able to outright shatter the Neuroi walls, forcing the hive to continue moving them. Yoshika had been given permission to board the Ratte and act as a field medic, looking after injured soldiers. Soon, the Ratte has eliminated the Neuroi walls, and Patton orders the Ratte to fire on the core. However, when it appears that the battle is won, the hive constructs a giant dome encasing the area, blocking the 501st’s access to and communications with the Ratte. Shizuka realises that she’d heard Yoshika calling out to her. The 501st realise that inside the dome, the Ratte and Yoshika don’t stand a chance, but Patton decides to make use of a heavily fortified flak tower and its telegram as a site to regroup. He informs the others they’re alright, and while Gertrude suggests using the Berlin tunnels to reach the others, Mio orders her aircraft, carrying Yoshika’s Shinden, to head for Berlin. Just like that, we’ve now hit the penultimate episode for Road to Berlin, a thrilling setup for the final fight against the Berlin hive. In this week’s episode, the highlights in combat were dominated by the Ratte, a tank of German design that in reality, never made it past the conceptual stage: the Ratte was intended to carry a pair of 28 cm SK C/34 naval guns and act as a mobile fortress gun. Of course, such a tank was never built (the designs were discarded in 1943): its immense size would have made it a lumbering vehicle vulnerable to aerial bombardment despite its armour. However, Road to Berlin has this conceptual weapon brought to life as an effectual weapon against the Neuroi, and did so in a colourful manner, by having Patton himself command it.

Penultimate episodes of Strike Witches always ended on a grim note: the Witches would make some initial gains against the hives and dealt damage to it, but they would inevitably unveil an even deadlier form. The original Strike Witches had the Warlock destroying the hive trivially before turning against its controllers and assimilating the Akagi, leaving Yoshika to take to the skies on her own. Strike Witches 2 saw the Yamato, upgraded with Neuroi technology, attempt to attack the Venezia hive unsuccessfully, forcing Mio to try and save the mission herself using what was left of her magical power. Similarly, Brave Witches‘ eleventh episode ended with Hikari rushing off to help the fight despite no longer being a formal member of the 502nd, after the Witches learnt that Grigori has a mobile core that Takami’s magic cannot detect. By comparison, Road to Berlin‘s opted to go with the grim ending during the tenth episode, and episode eleven concludes on a most confident note: Patton and Yoshika have managed to reach safety inside Wolf’s dome, Mio feels that there is something she can do to help out, and Gertrude suggests using the underground tunnels to bypass the impenetrable dome. This is a first in Strike Witches – while Wolf is presumably tougher than the Venezia hive (otherwise, other Witches would’ve dealt with it already), the 501st leave Road to Berlin‘s penultimate episode with a plan to save Yoshika and the Ratte’s crews. There isn’t any panic, consternation or fear, just resolute determination to get the job done. This change in tenour indicates that the Witches of the 501st have seen considerable improvement over the earlier seasons, and so, even something as diabolical as Wolf is merely just another ugly opponent to prevail over. As such, with this confidence and resolve, it is evident that the finale is going to see Wolf defeated; for viewers, then, the only question that remains is how the Witches go about doing so, and similarly, what bit of sorcery will be involved in helping Yoshika to recover her magic just in time for her to play the central role in Wolf’s defeat. 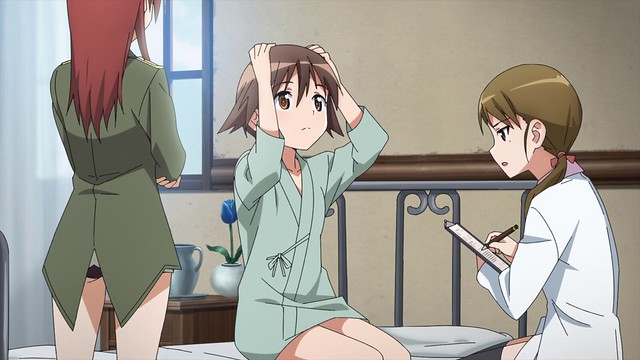 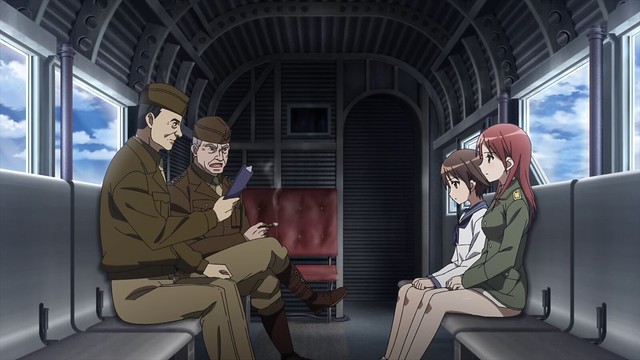 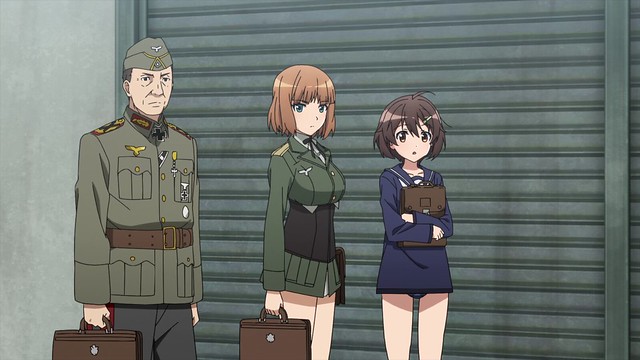 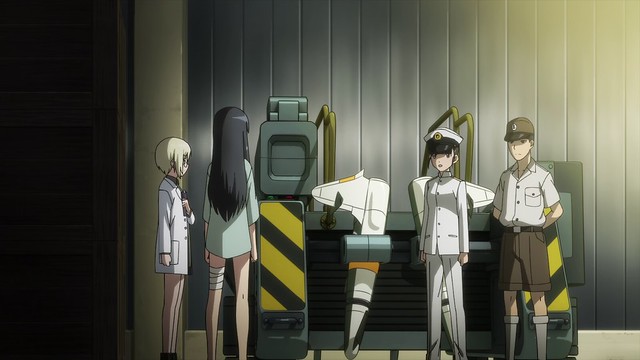 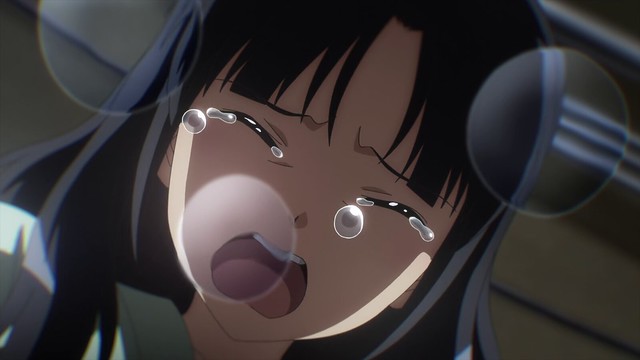 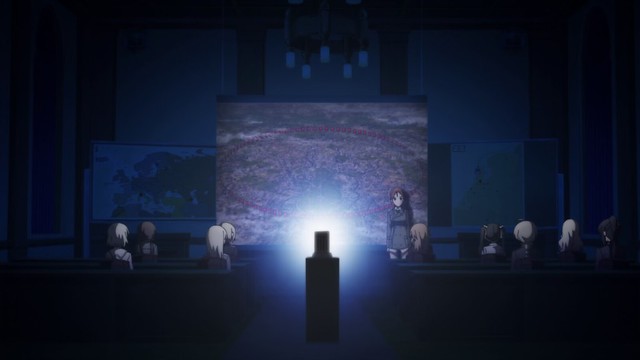 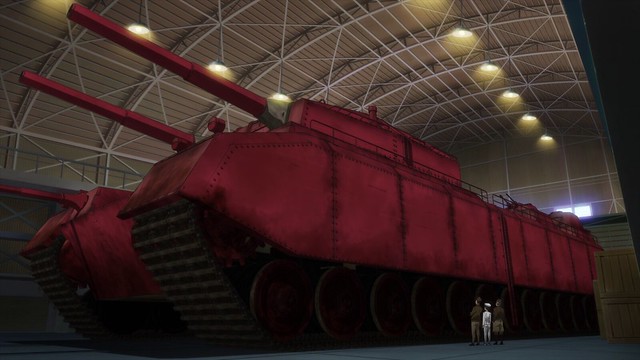 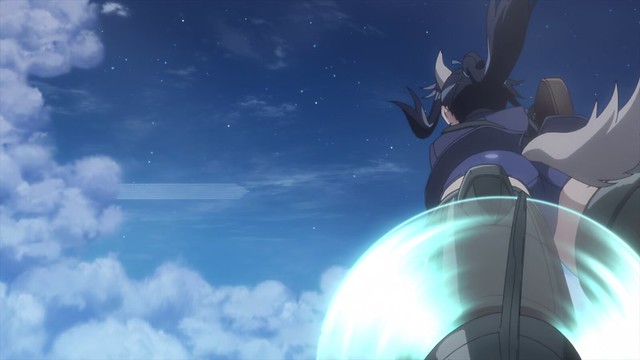 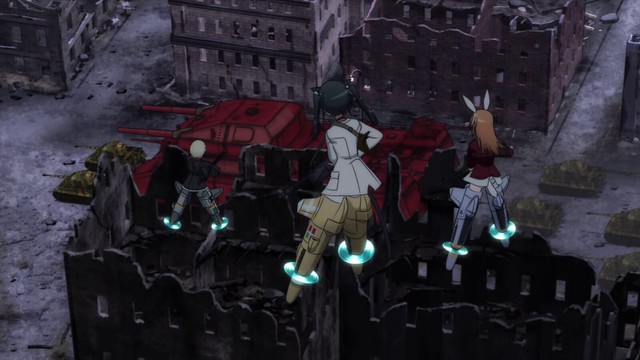 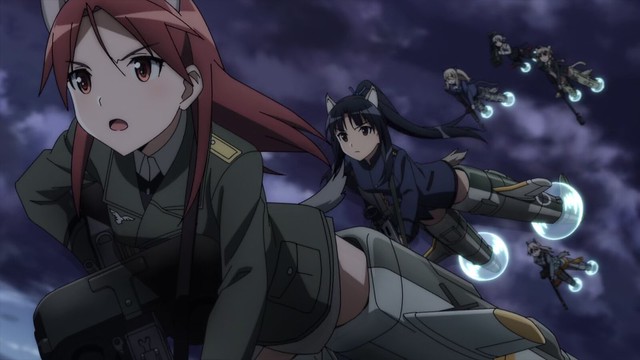 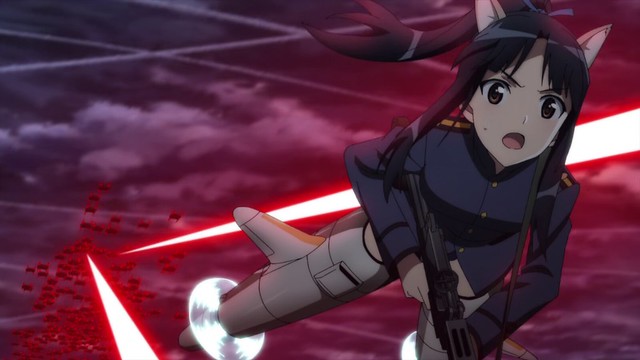 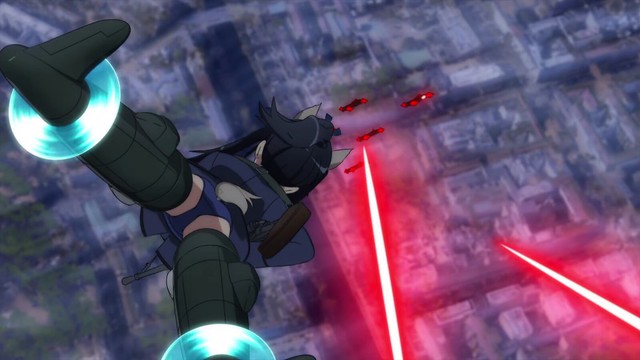 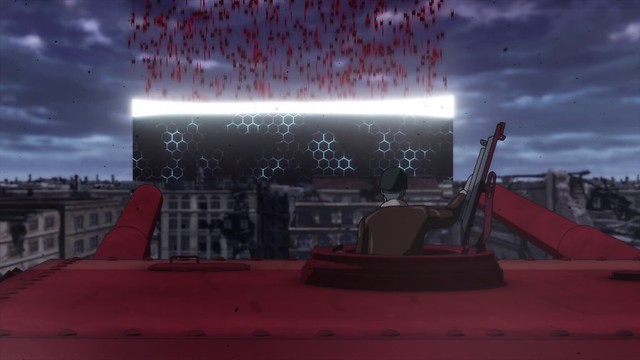 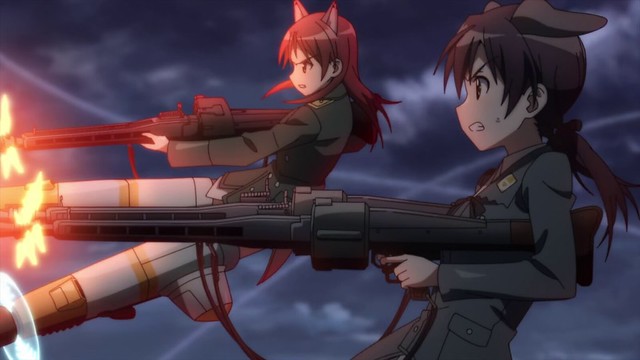 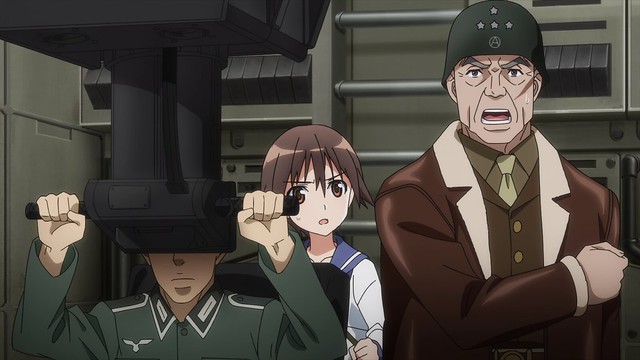 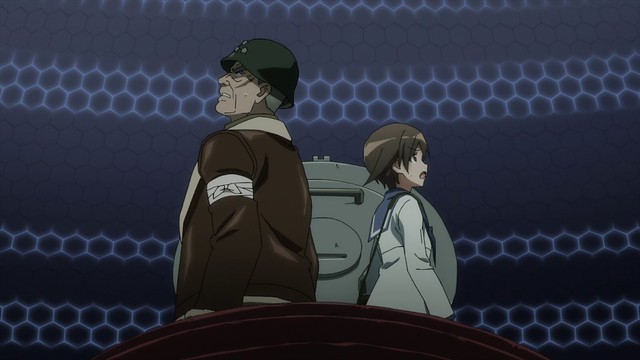 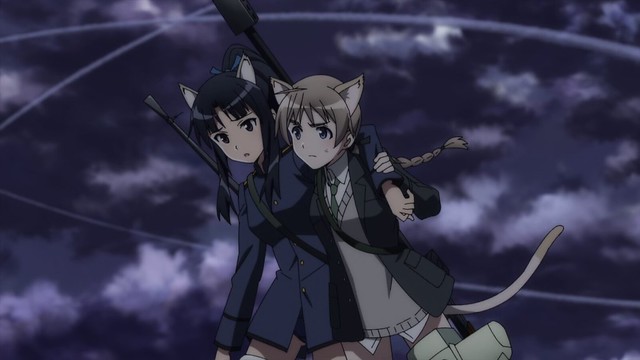 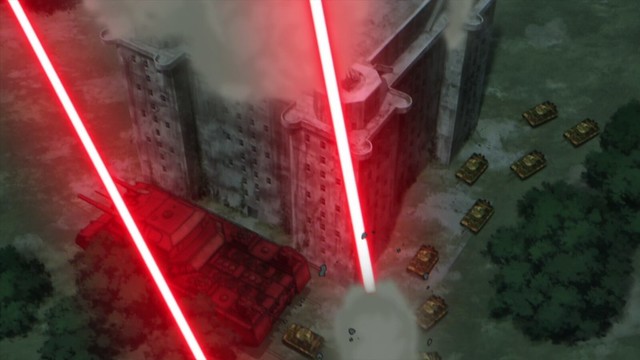 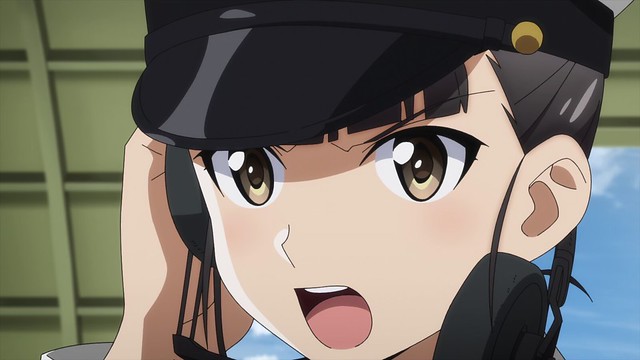 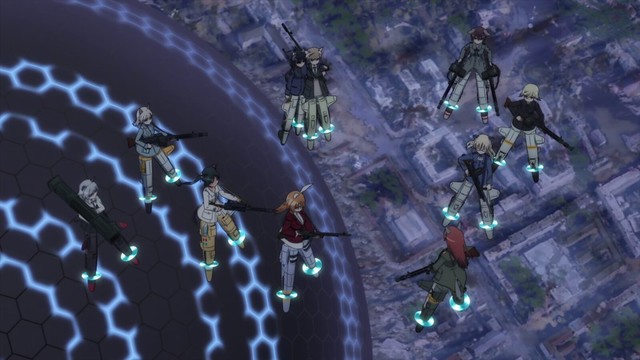 The outcomes and themes of Road to Berlin are no different than those of its predecessors, speaking to notions of trust, camaraderie and teamwork as being sufficient to overcome almost any challenge, in conjunction with a healthy side of doing what one believes to be right, as opposed to following orders. By this point in time, it becomes clear that the Strike Witches franchise has definitely hit its stride, and that a 501st story using lessons learnt both from Operation Victory Arrow and Brave Witches can be told in an effective manner. Road to Berlin has definitely managed to showcase more of the Strike Witches universe, incorporating Patton and Bradley and an increased presence of conventional forces, to show that while the Witches are powerful, ultimately, it is the combination of leveraging the Witches’ unique talents and experience that will allow humanity to prevail over this alien monstrosity. By Road to Berlin, conventional forces are given a chance to shine and appear more efficacious than they had previously: whereas Strike Witches and Strike Witches 2 both utilised unstable Neuroi technology, Brave Witches and Road to Berlin use vastly upgraded technology that is purely human in origin. It is unsurprising that the human weapons are more dependable than anything derived off the Neuroi, and this suggests that, as Strike Witches matured into the series it is today, the series is becoming clearer on the idea that defeating the Neuroi entails entrusting faith to the Witches and armed forces to work together, rather than counting on untried technology reverse-engineered from an enemy that still remains as enigmatic as it did when it was first introduced some twelve years ago. Road to Berlin, then, is on an especially exciting course as it enters its finale, and I’m rather looking forwards to seeing how this third season of Strike Witches chooses to wrap everything up.