2 Comments Posted by infinitezenith on December 19, 2020

Rabbit House is being reinforced with Chimame Corps!

Chiya and Sharo are excited to help Chino out at Rabbit House, and although they bring with them the aesthetics from their own respective cafés, their experience means that Rabbit House has no trouble handling the larger number of customers resulting from Aoyama’s magazine. However, it turns out that Chiya and Sharo have other obligations on Christmas Eve and won’t be around for the fist half of the day. Fortunately, Cocoa and Rize had foreseen this eventuality: the next day, Maya and Megu show up to help out. Chino is moved to tears, and the three set about finding a proper tree-topper for the Christmas tree that Rize’s father had brought in. They’re soon joined by Chiya, Rize and Sharo. Cocoa herself arrives a bit later, giving out roasted chestnuts to happy customers. As the day’s activity begins to wind down and Rabbit House prepares for their Christmas party and secret Santa exchange, Chino’s grandfather and Takahiro remark that Saki would’ve been overjoyed to see Rabbit House brimming with such joyful activity. While exchanging gifts, everyone also expresses the depth of their friendship, promising to be together for one another. Rin arrives and notes that she’s helping out to offset the fact that Rabbit House had been so busy. Later, Chino decides it’s her turn to play surprise Santa and quietly drop her gift for Cocoa off overnight, but Cocoa unexpectedly wakes up to do the same. Chino’s given Cocoa a snow globe, and Cocoa gives Chino a new alarm clock. The next morning, it turns out that the new alarm clock is a bit of a trickier one to turn off, and Chino’s grandfather finds amusement in the fact that things will continue to be lively with Chino and her friends. We now stand a shade less than a week from Christmas, but with this week’s GochiUsa BLOOM episode, it does feel that Christmas has arrived early. As Chino prepares to celebrate Christmas with her friends, viewers are treated to the most visually impressive portrayal of Christmas in GochiUsa, along with a sight that, as Chiya comments on, did not appear possible anywhere but within a dream. With GochiUsa BLOOM‘s penultimate episode in the books, it seems that dream has now been realised in full, for this episode marks the first time all of the incomplete Rabbit House uniforms are finished, and moreover, are put to good use.

Saki’s dream had been for Chino to find a group of friends who would one day share in her happiness at Rabbit House. GochiUsa had indicated that Chino had grown up around customers, and while ever courteous and polite, always felt a little shy around others. Being able to make new friends could not have been easy for Chino, especially after Saki’s passing, and since then, Chino’s grandfather had stayed behind in Tippy’s body to look after Chino. However, with friends in her corner now, Chino’s world has become more lively, colourful; every day is a potential surprise, with unexpected adventures and discoveries seemingly around every corner. With Cocoa, Rize, Chiya, Sharo, Maya and Megu around, there hardly seems to be a quiet moment for Chino, who begins to appreciate the joy in her world. GochiUsa had spent the past two seasons building upon this concept, and here in BLOOM‘s second-to-last episode, the outcomes are presented in a visual, tangible fashion. Cocoa and Rize not only finish the green and yellow Rabbit House uniforms for Chiya and Sharo, but they also craft new uniforms for Maya and Megu: this act represents the upholding of Saki’s legacy and intentions, as well as building out from what Saki had wished for Chino. This is why Chino bursts into tears upon seeing Maya and Megu in new Rabbit House uniforms: that Rize and Cocoa took the time to make these new uniforms show that Saki’s memory as being very much alive and well, and Chino, likely being aware of what her mother had hoped for, now realises that things have very much changed. Chino’s found her happiness in the world, understands her mother’s wishes and is more than prepared to move forwards into the future, where she intends to broaden her horizon and live life as fully as possible.

While GochiUsa already had a well-deserved reputation for crafting unparalleled atmosphere through its animated adaptation, BLOOM impossibly manages to exceed expectations and raise the bar even further. This season, GochiUsa has twice capitalised on a holiday to accentuate its messages of healing and discovery through fellowship. Halloween, being a festival to remember the deceased, saw Chino realise that she’s definitely begun on the path of healing through Cocoa’s presence. Christmas is a time of celebrating togetherness, and BLOOM shows that Chino’s friends are here to stay, being an ever-dependable presence she can trust and depend upon whenever things get challenging, as well as being there to celebrate good times and success with her, as well. Chino might’ve been quite alone when GochiUsa began, but by BLOOM, this is certainly no longer the case. BLOOM is much larger than its predecessors were in terms of scale: the world feels warmer, more active and occupied than it had in earlier seasons, and this is a clever visual metaphor for Chino’s appreciation for the world. Once constrained to Rabbit House and school, the increasingly populated and detailed world seen in BLOOM acts as a parallel for how Chino’s become more attuned to the happiness in her world. She’s definitely not alone now, and nowhere is this better affirmed than seeing all of her friends together, wearing the Rabbit House uniform to serve customers before unwinding with a Christmas party of their own. It is during the uncommon atmosphere of a holiday, whether it be Christmas or Halloween, that BLOOM really brings out the best in GochiUsa, and the implication of this is that it is during magical days, when people are captivated by the tenour of excitement and joy, is the time where people also come to really appreciate that which they have. 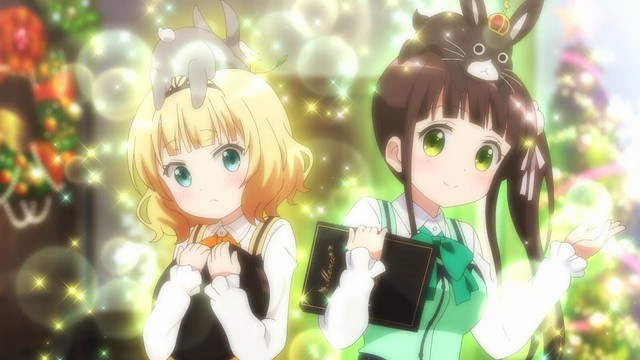 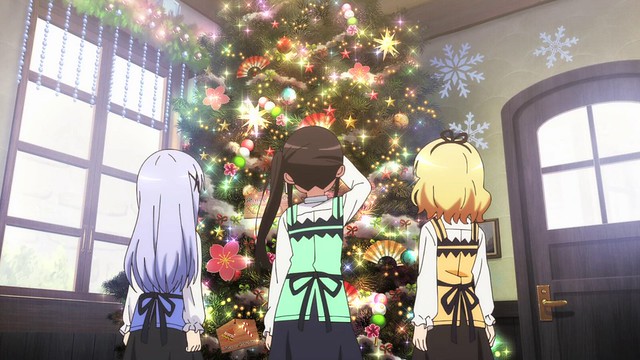 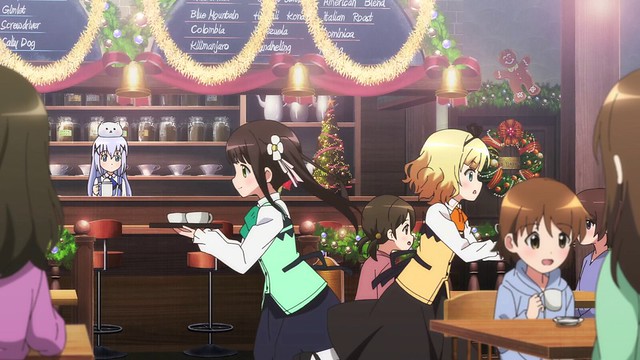 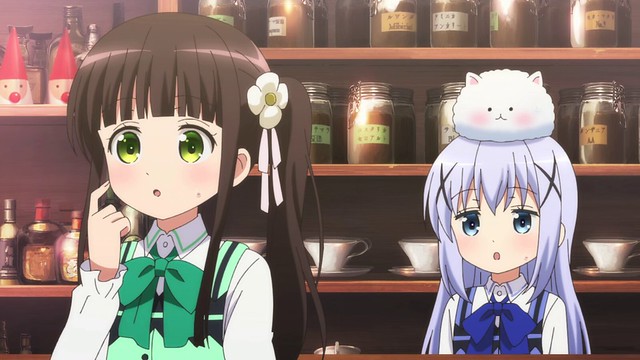 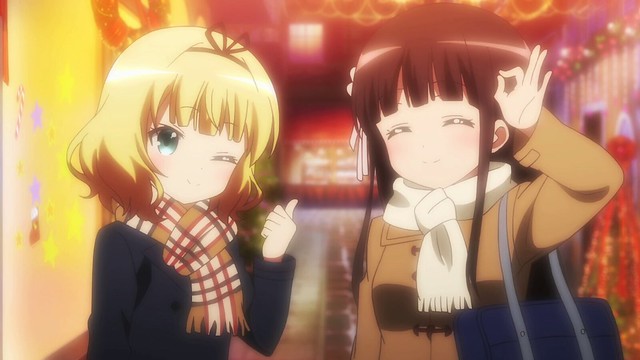 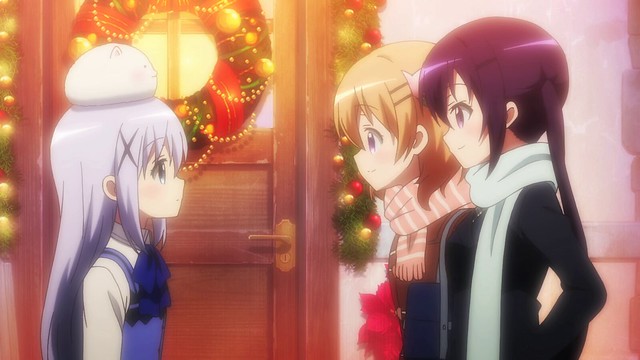 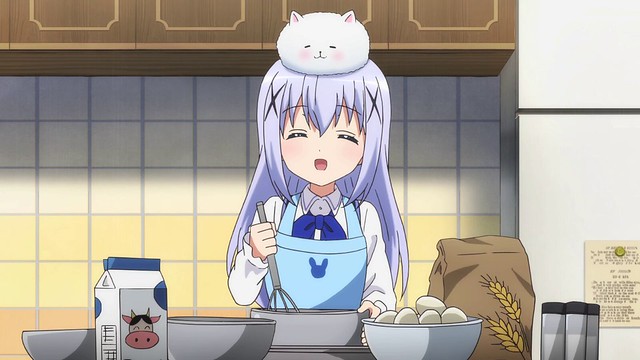 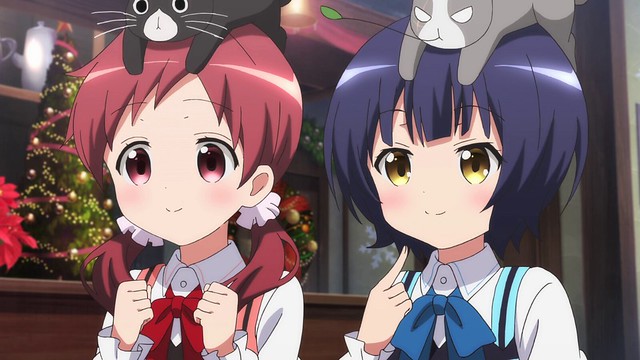 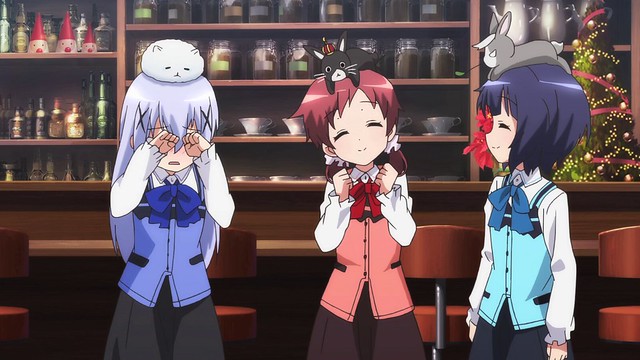 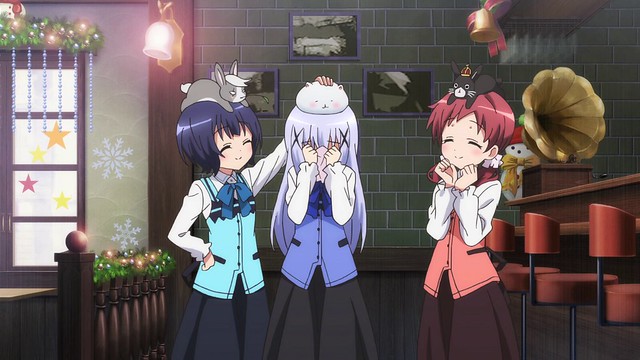 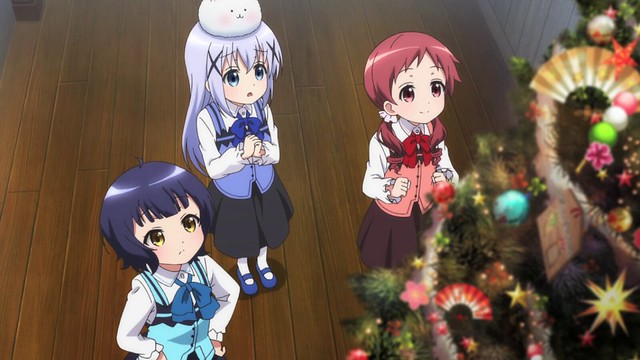 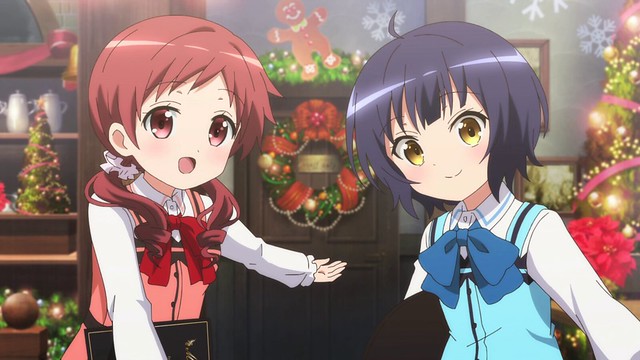 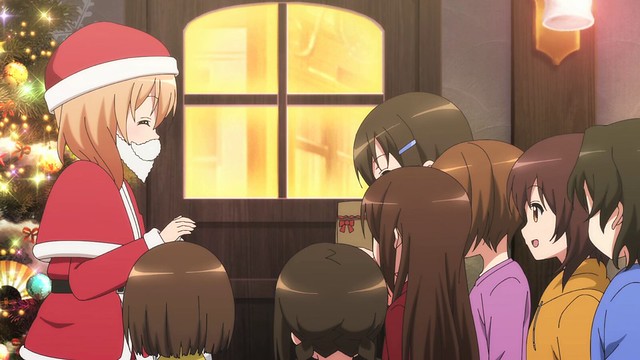 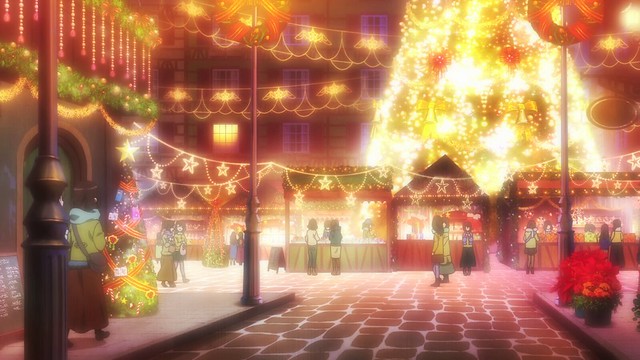 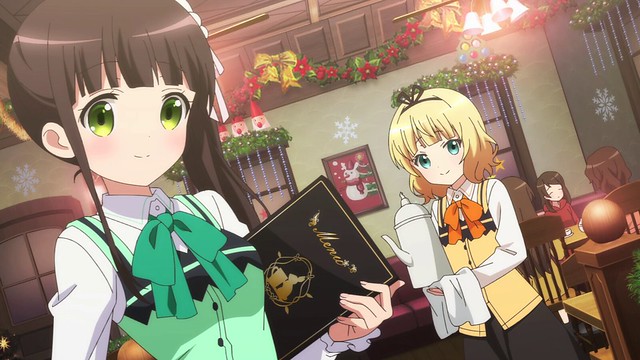 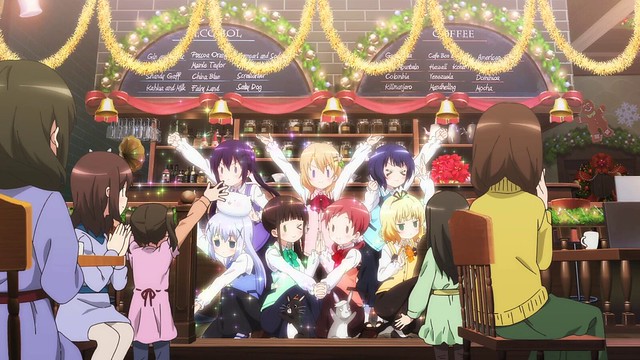 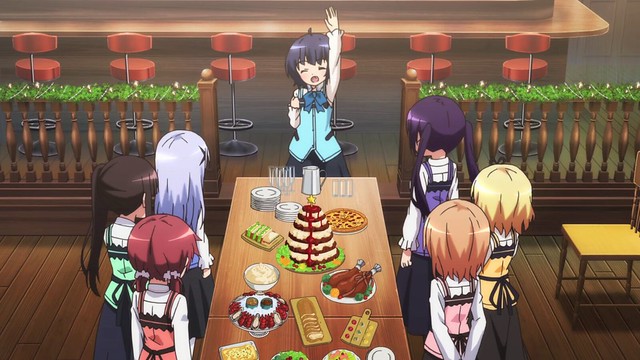 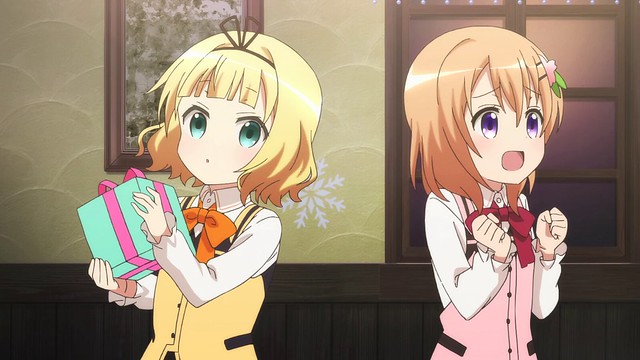 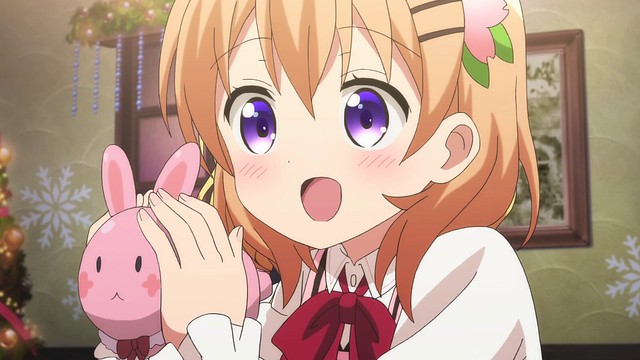 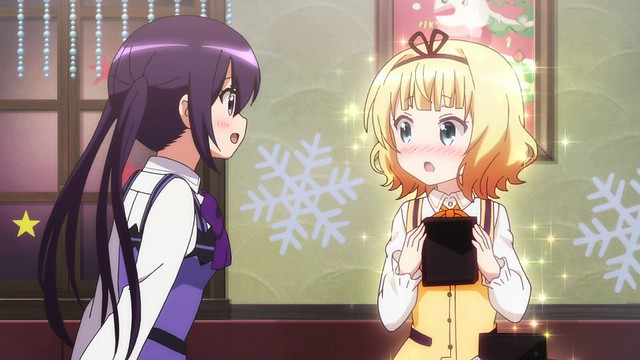 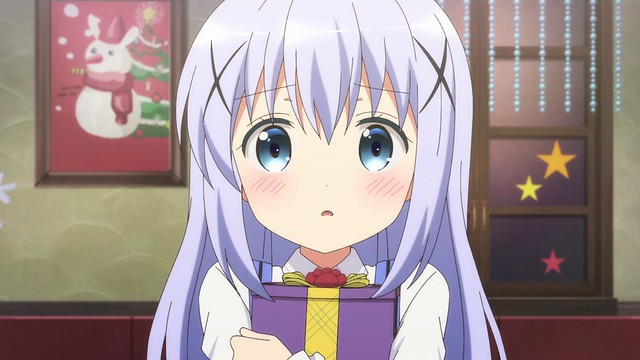 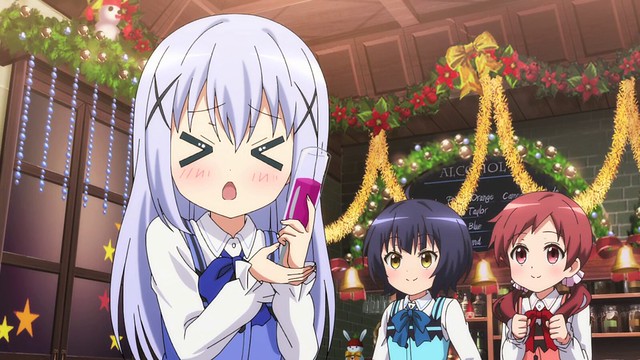 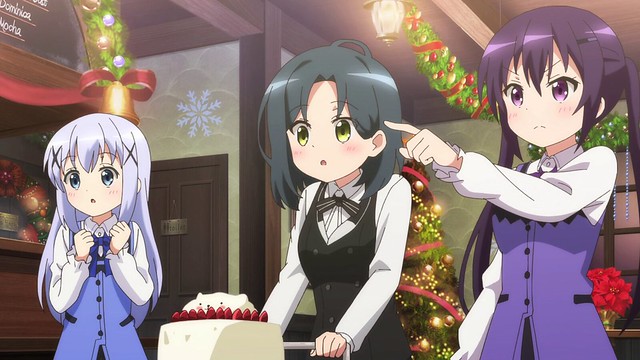 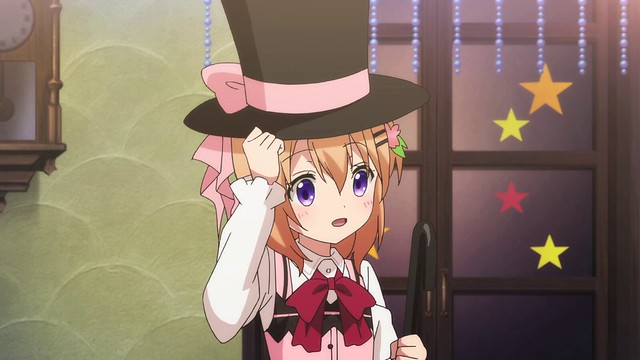 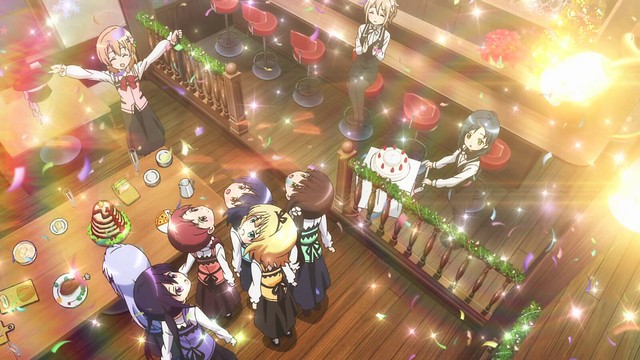 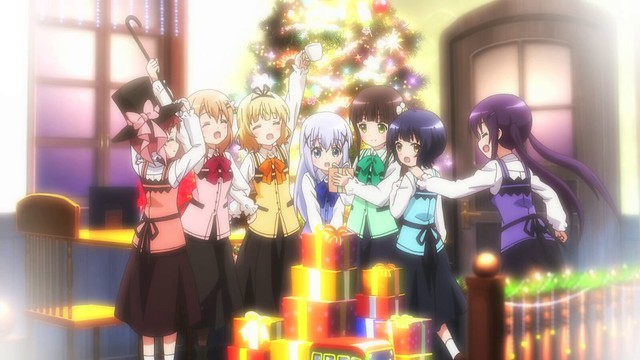 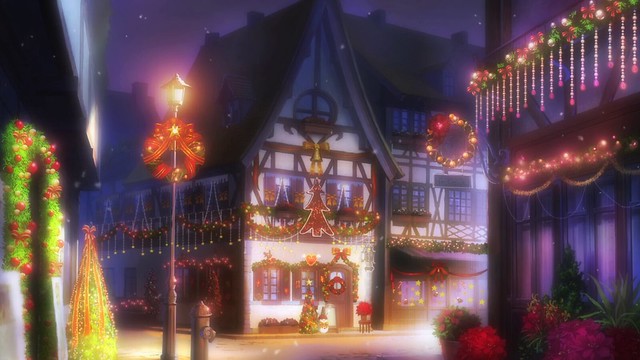 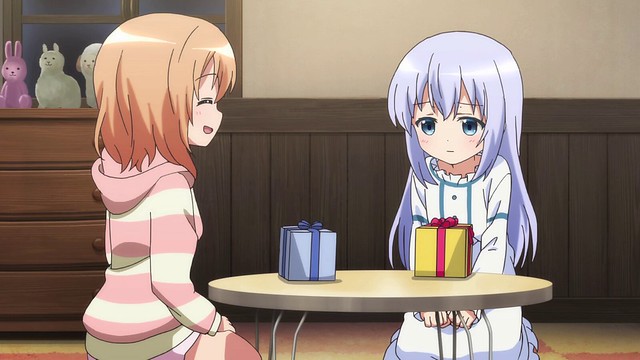 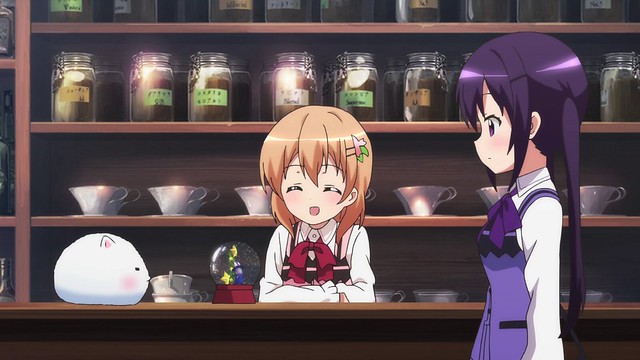 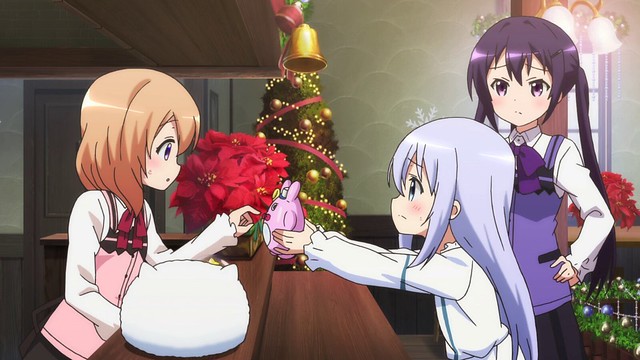 I certainly did not expect GochiUsa BLOOM to delve anywhere nearly as deeply into themes of healing and fellowship as it did. The first season of GochiUsa had excelled with its atmosphere, crafting a very compelling, and inviting, wood-framed town that set as a highly distinct background for everyday adventures. The second season built upon the different character dynamics to show that as long as one was with the people dear to them, there would never be a dull moment, and that precious memories would always be found irrespective of what one was doing. BLOOM, on the other hand, takes advantage of the series maturity to begin exploring deeper topics. From concerns about the future, to accepting the past and healing from loss, BLOOM strikes a fine balance between saying something meaningful about these matters, as well as continuing to present the fluffy and warm tone that GochiUsa had become known for. The end result of this is that GochiUsa is more thought-provoking than its appearance suggests: the series is ultimately about aspects of life, from sorrow to joy, everything in between, and how experiences together are amplified. Challenges become more manageable, and triumphs feel all the more so with friends. Here at the penultimate episode, it is clear that GochiUsa BLOOM represents the slice-of-life series at its finest: there is appreciation for the small things, but there is also a moving, relevant life lesson underneath everything. However, while GochiUsa may have a moral for viewers, this is never forcibly presented; instead, GochiUsa‘s themes are gently woven into the characters’ experiences and interactions. Altogether, GochiUsa BLOOM has been a wonderful series that raises the bar for what is possible with slice-of-life series, and here in episode eleven, viewers are given a spectacular episode that captures the spirit of Christmas while seamlessly integrating the series’ themes into the story: this comes a bit early, but I see no trouble in recommending GochiUsa to readers at all. BLOOM is especially strong in its presentation, and I am left in anticipation to see where this season wraps up.