The Glassy Ocean, Ursa Minor Blue and A Piece of Phantasmagoria: The Magic of Shigeru Tamura and Jon Spencer Reviews’ Christmas AnimeXchange

“A single dream is more powerful than a thousand realities.” –J.R.R. Tolkien

Christmas is a time of sharing and being with important people. This year, I participated in Jon Spencer Reviews’ Christmas AnimeXchange, a community event where participants are randomly assigned a partner, and then we recommend one another anime based on a list of shows we’ve seen. I received, from Lys (@Submaton), a set of three unique films from Shigeru Tamura, a Japanese manga artist and illustrator. I was initially surprised: I am renowned in the community for being a procrastinator, but as it turns out, Tamura’s movies are short animated features, perfect for the blogger with a propensity for taking too long to pick up and enjoy shows of interest. I thus began watching Lys’ recommendations, opening the party with Glassy Ocean, which follows a fisherman travelling over a glass ocean, where time has frozen and where a breaching whale presents incomparable beauty that is to be admired. Having now a sense of what to expect, I began Ursa Minor Blue. This story presents a boy and his grandfather who take on a magic harpoon from a wizard and hunt down a monstrous fish. As ocean and sky merge, the boy and his grandfather are whisked on a fantastical, mind-bending journey where reality and dreams blend together. Finally, in A Piece of Phantasmagoria, fifteen short stories set on the fantastical world of Phantasmagoria are presented, detailing the everyday comings and goings of its inhabitants with a surreal whimsy that is evocative of Dr. Seuss’ great works. Altogether, Tamura’s works are a highly unusual, eccentric and cathartic collection of animation, far removed from the usual materials that I would write about. Tamura’s works certainly do appear to be perplexing at first glance: in a world with glass oceans, walking buildings and towns made of bread, the stories of Phantasmagoria are small, seemingly disjointed vignettes that do little more than indicate the unusual nature of Phantasmagoria. However, this collection of stories from a surreal world conceal a pleasant and meaningful message: what appears strange to us viewers is common, everyday life on Phantasmagoria, and consequently, the viewer’s mind is allowed to wander as they take in the sights of Phantasmagoria.

Thus, through A Piece of Phantasmagoria, Ursa Minor Blue and The Glassy Ocean, Tamura uses surrealism to accentuate the idea that the world is vast. Every location has its unique features, and every feature has a story behind it. While people often travel to explore different cultures and regions, even this is merely scratching the surface: there is depth well beyond what can be initially seen, and this depth is what gives the world its beauty. A Piece of Phantasmagoria sets this mood by sending viewers to many different locations. From a massive coffee pot-shaped coffee house, to a unique island where cacti can dance, and a factory that collects rainbows, Phantasmagoria is a world that is very much different than, but also similar to our own. Every vignette elicits a few smiles, the occasional bit of sorrow and the persistent feeling that it was too short, rather similar to how travelling only yields a brief glimpse of a world that is unlike our own. Tamura would later return to Phantasmagoria in The Glassy Ocean, where the story of the area’s inhabitants are presented in greater detail. Both Glassy Ocean and Ursa Minor Blue take advantage of their runtime to present a matter-of-fact story in a surreal setting; for their inhabitants, what we count as fantastical is a part of everyday life. Both films thus suggest that sights and sound we consider unusual and extraordinary while travelling, are those that an area’s inhabitants find mundane, unremarkable. Taken together, then, Tamura’s three films can be seen as a metaphor for travel; through our screens, viewers are taken on a journey to a world quite disparate from our own, and allowed to observe a different way of life in style. In a time where real travel is not recommended, Tamura’s works offer viewers a chance to explore something different. 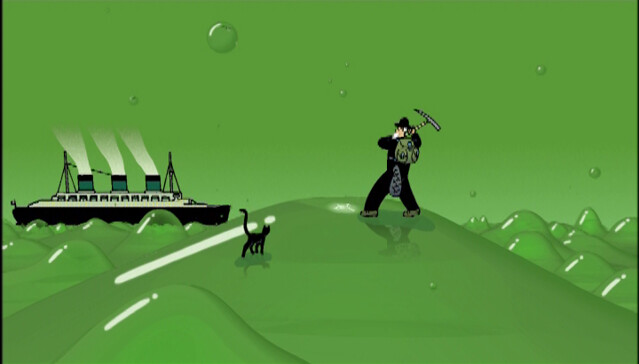 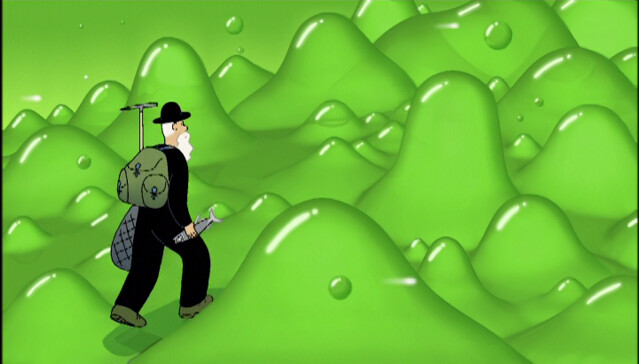 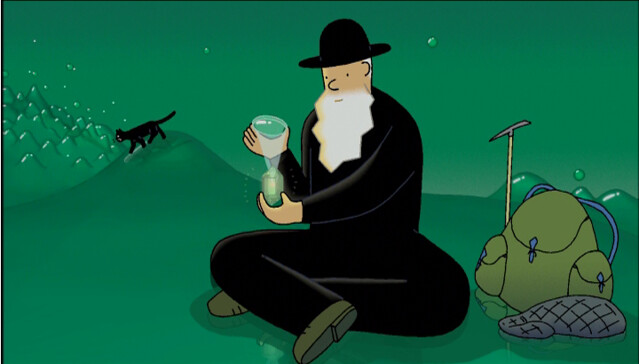 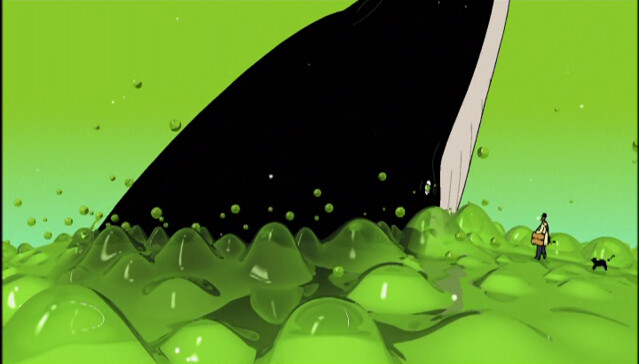 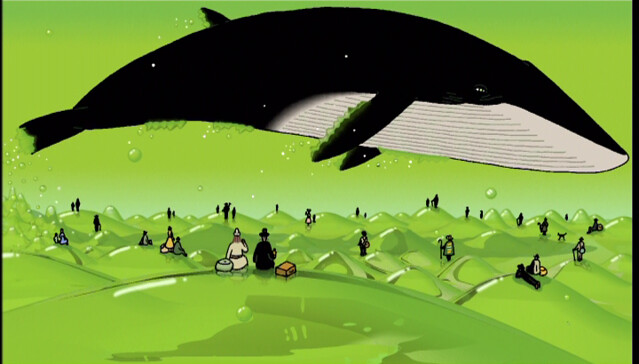 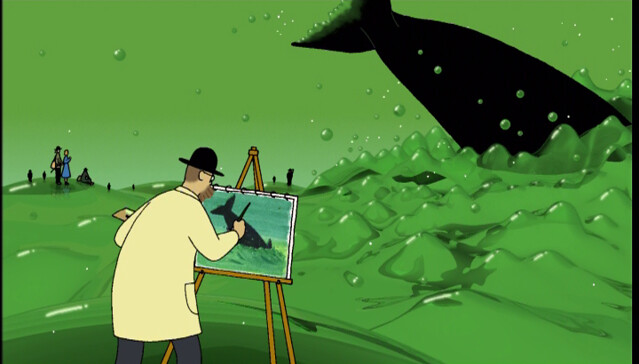 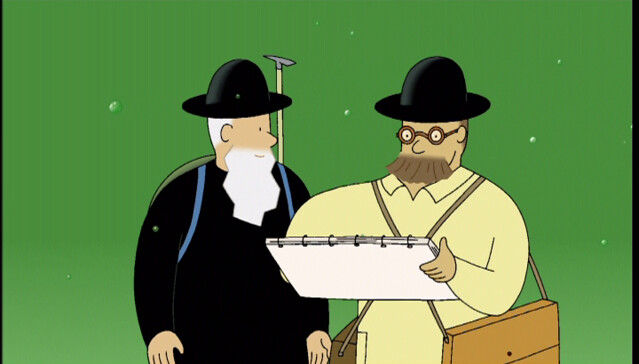 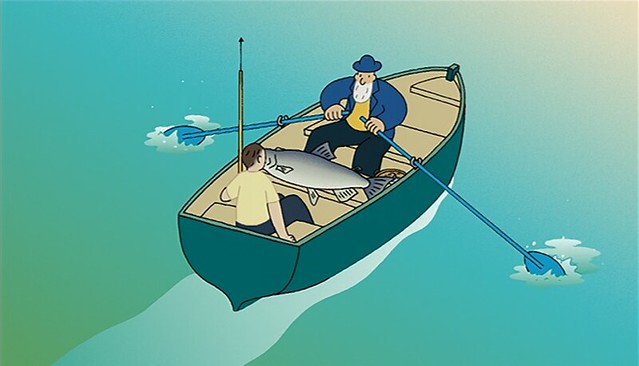 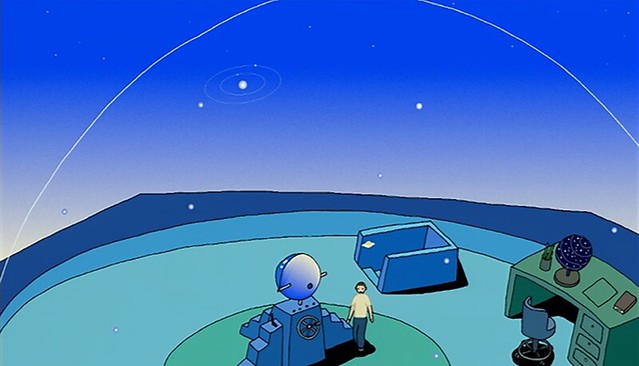 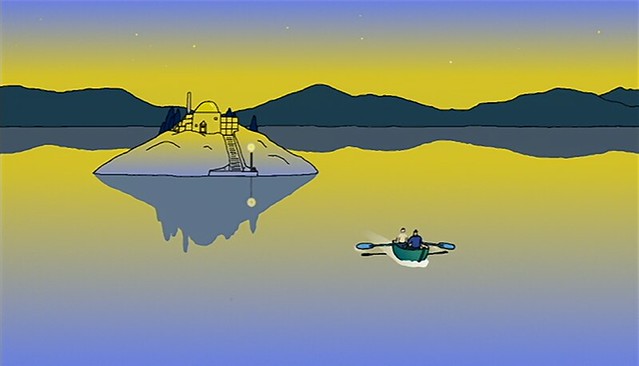 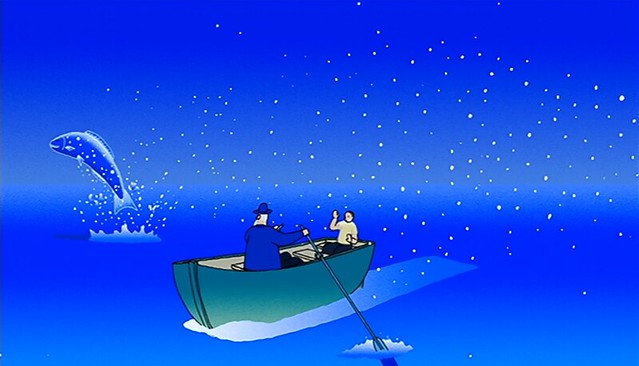 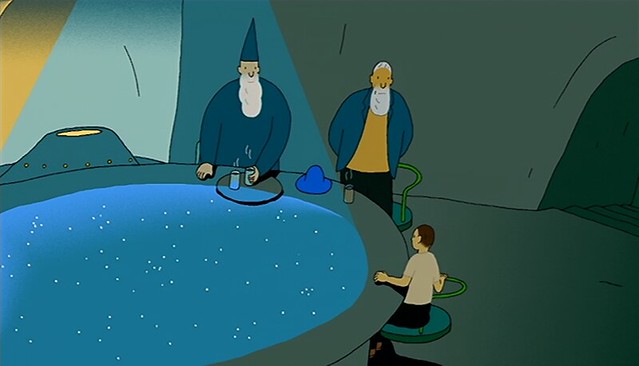 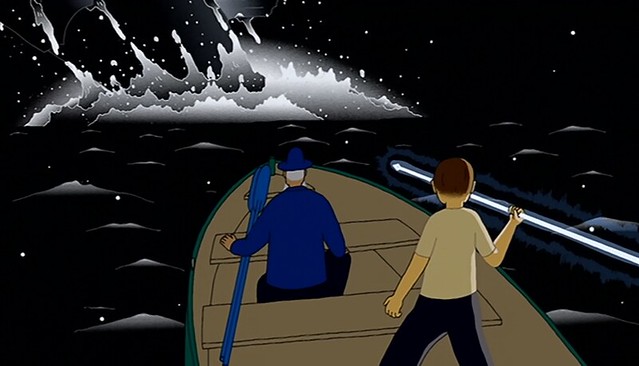 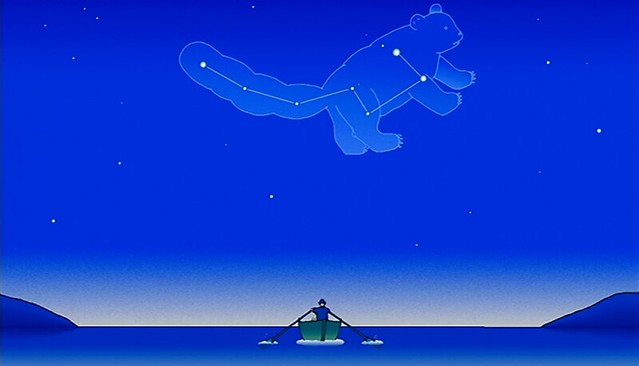 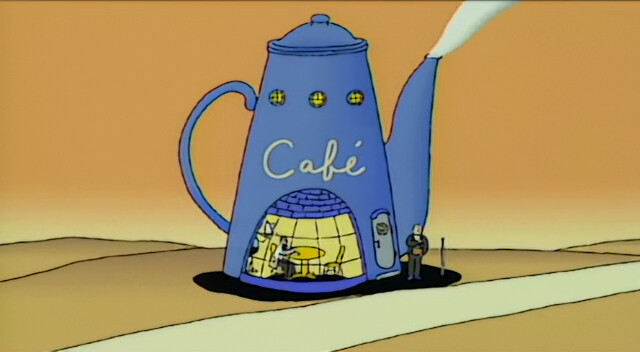 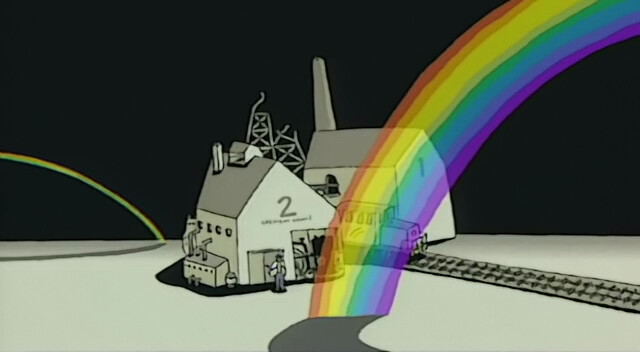 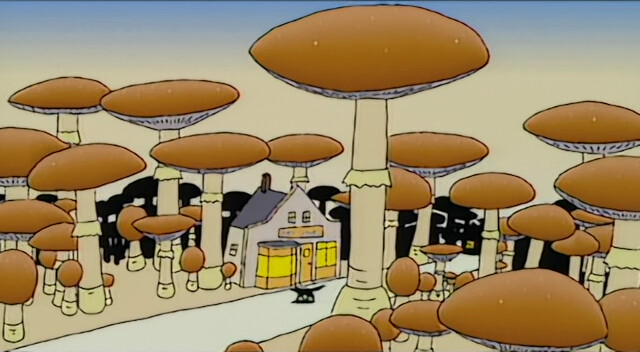 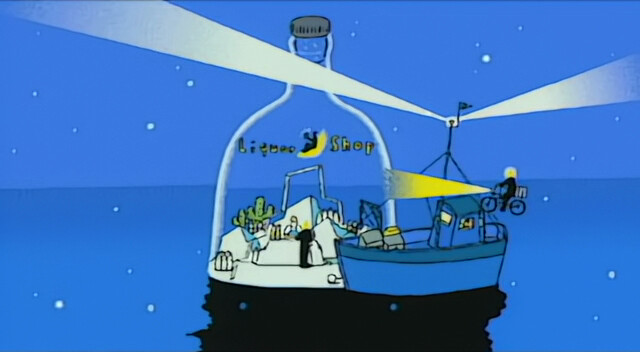 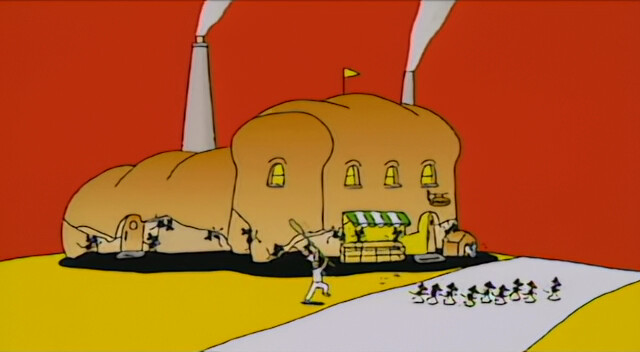 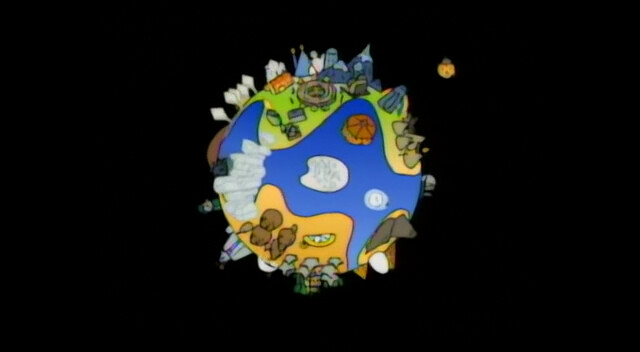 Watching through each of The Glassy Ocean, Ursa Minor Blue and A Piece of Phantasmagoria, it becomes apparent that these old animated works will not be competing with visual behemoths like Makoto Shinkai or Studio Ghibli’s works any time soon. The minimalist and simple animation was a consequence of Tamura experimenting with purely computer generated visuals. At the time, this would’ve been cutting edge, and indeed, computer animation has advanced considerably since these early shorts. However, The Glassy Ocean, Ursa Minor Blue and A Piece of Phantasmagoria all have a much more dated feel to them. It is not in visuals that these three films excel in, but rather, the audio. Where visuals alone do not tell the story, the sound engineering does, and each of these three films are particularly standout when it comes to audio. The clanking of a metal pick on the glass ocean, bubbling of a coffee kettle boiling over, whooshing from passing vehicles and crumbling of stone buildings all sound compelling. Moreover, there is a gentle melancholy within the incidental music itself; the soundtracks for The Glassy Ocean, Ursa Minor Blue and A Piece of Phantasmagoria each have a fantastical, mystical character to them that is simultaneously evocative of a world different than ours, and creating a sense of calming. Altogether, the worlds that Tamura envisions in these three shorts is conveyed through sound as much as it is the highly minimalist, distinct artwork and animation. These films may not have the same traits as a standard film might, but through a highly artistic presentation, Tamura manages to tell his stories in a highly distinct and noteworthy style, perfect for wrapping the year up. In the event that it were not clear, I had fun watching these three films from Shigeru Tamura; the sum total of a distinct approach towards storytelling, minimalistic artwork, detailed and powerful sound, and manageable runtime makes this the perfect series to sit down and enjoy during the final month of the year. Lys’ recommendation was a solid choice, and before I head off and tend to a few things for this Silent Night, I hope that Lys had fun in equal measure with my recommendation: Sora no Woto.