4 Comments Posted by infinitezenith on December 31, 2020

“The more one does and sees and feels, the more one is able to do, and the more genuine may be one’s appreciation of fundamental things like home, and love, and understanding companionship.” –Amelia Earhart

While in the royal capital, Yuna cooks for Noire, Shia and Elenora. Later, Yuna single-handedly destroys an evil sorcerer and his entire army of monsters en route to escorting Cliff in. During the king’s birthday, Yuna provides guests with her pudding, and after the event ends, she runs into bakers who are in debt to loan sharks. Yuna suggests that they accompany her back to Crimonia, where she helps them to open a new bakery. The shop is immensely successful, and Yuna later learns that Cliff had taken care of the loan sharks. The bakers decide to stay in Crimonia, to Yuna’s pleasure. When Yuna develops a hankering for fresh seafood, she makes her way over to the port town of Millela and learns that the appearance of a Kraken, together with bandits, has resulted in hard times. After meeting guild-master Alta, Yuna dismantles the bandits and becomes motivated to fight the Kraken after visiting a restaurant, where she is served a Japanese-style meal. Despite struggling to come up with how to fight the Kraken, a meal with a family gives her the inspiration she needs. In a titanic battle, Yuna manages to defeat the Kraken, allowing Millela’s citizens to fish again. With all of the activities Yuna is involved in, Fina becomes depressed and feels that she’s becoming distant from Yuna. She decides to spend time with Gentz, and Yuna receives a visit from Noire; both Gentz and Noire respectively explain to Fina and Yuna that they need to be more upfront about how they feel about one another. Fina and Yuna thus reconcile and promise to spend more time together. This is Kuma Kuma Kuma Bear, one of the more curious entries from the fall anime season whose unusual premise conceals a heart-warming and meaningful theme.

At first glance, Kuma Kuma Kuma Bear is merely another isekai series, a simple and rudimentary romp in a high-fantasy world with kings, castles, quests and adventure. The genre has admittedly saturated the market of late, and it seems that one could hardly take a step without encountering isekai series. However, initial impressions are misleading, and Kuma Kuma Kuma Bear quickly establishes itself to be completely unlike most isekai; with its warm themes and tender moments, Kuma Kuma Kuma Bear presents its theme in a direct manner. Throughout Kuma Kuma Kuma Bear, Yuna’s bear suit and the powers it confers allows Yuna to trivially solve problems. Driven by her kind heart and desire to help those in need, Yuna leaves a tangible impact wherever she goes. However, even with power rivalling that of a GM, or Thanos, Yuna’s journey was only possible because of her chance encounter with Fina. Despite being able to take on armies on her own and terraform at will, Yuna’s inability to loot corpses means that a core part of her experience in this world was missing. This is where Fina comes in: originally Yuna’s partner, able to complement Yuna and do what Yuna cannot, Fina gradually introduces Yuna to the importance of family, companionship and love. More so than for her ability to convert defeated monsters into resources, Yuna comes to view Fina as a little sister, someone to look out for, encourage and dote on. This is the human interaction that Yuna had been missing in her old life, and while she continues to voice that she wasn’t too satisfied with interactions with other people, the reality is that Yuna also longed for people to be with. By fulfilling this role, Fina encourages change in Yuna. As such, in Kuma Kuma Kuma Bear, the main idea the series conveys through its first season is that all the power in the world cannot replace companionship, and it is precisely through companionship that Yuna is able to put her powers to use for someone other than herself. 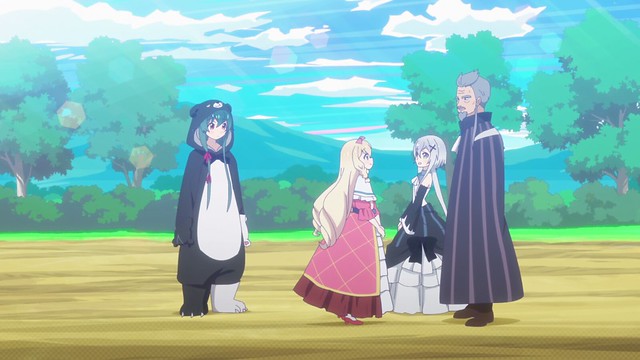 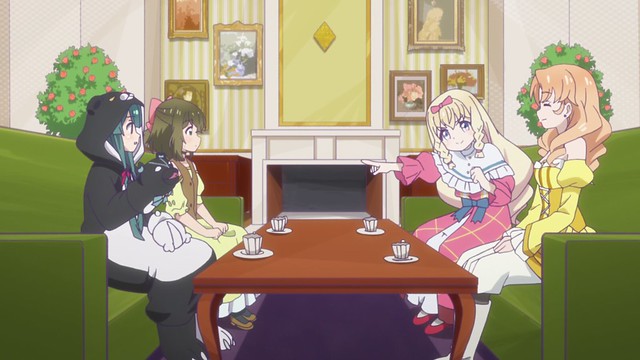 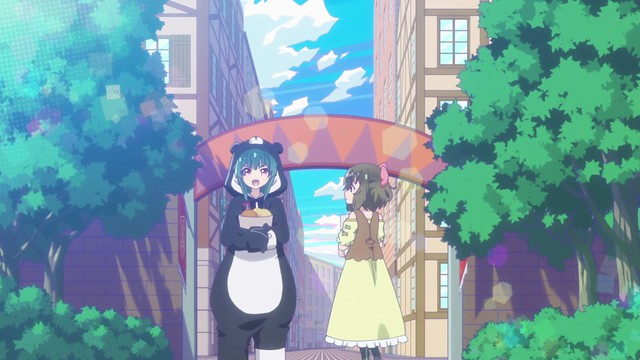 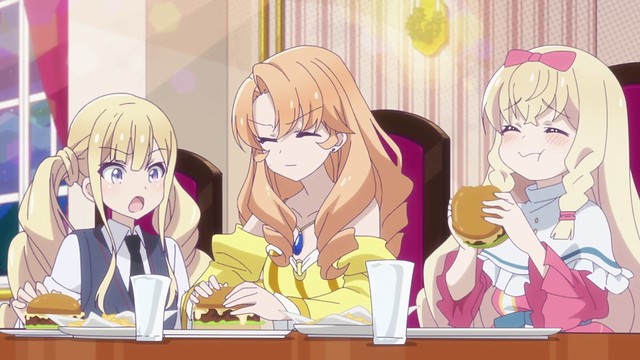 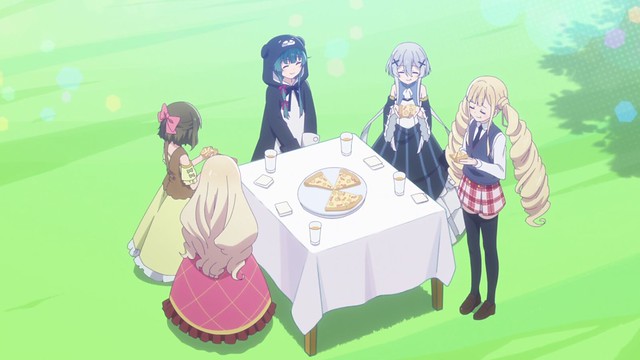 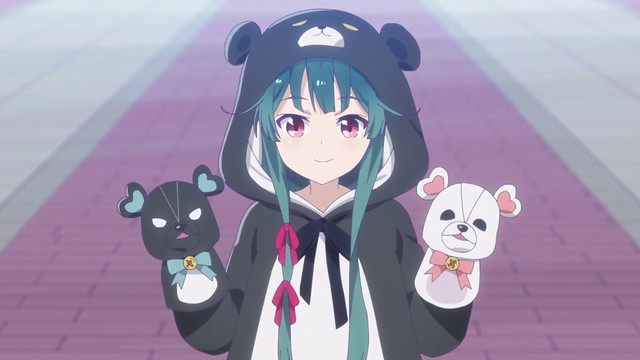 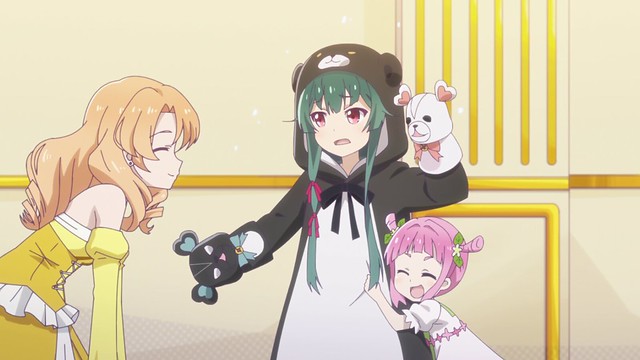 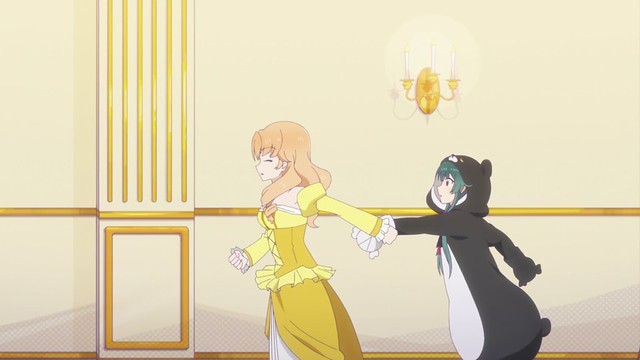 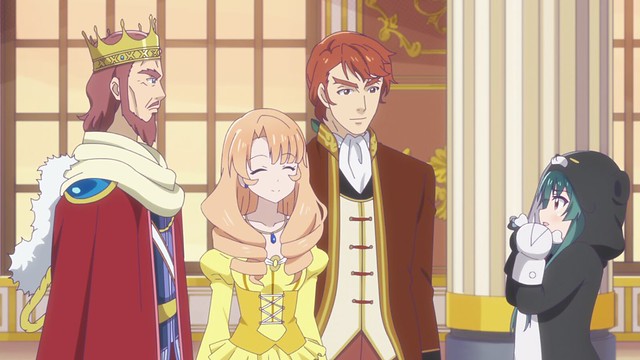 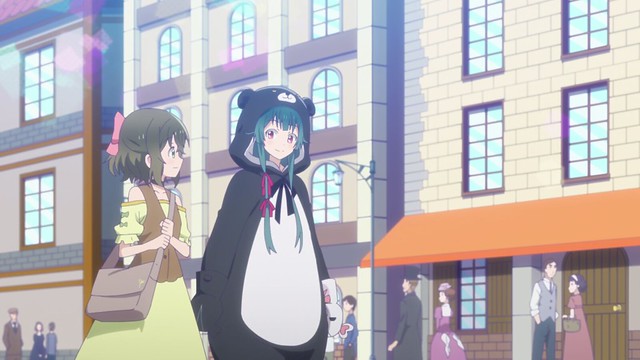 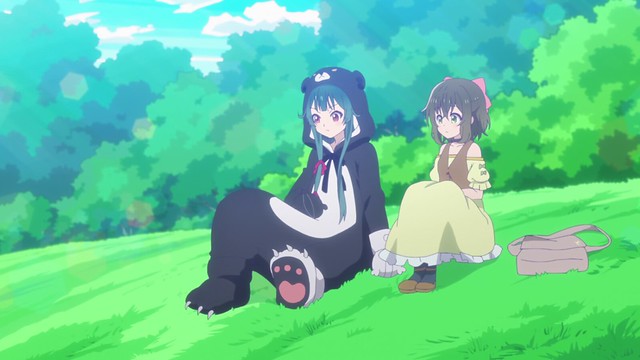 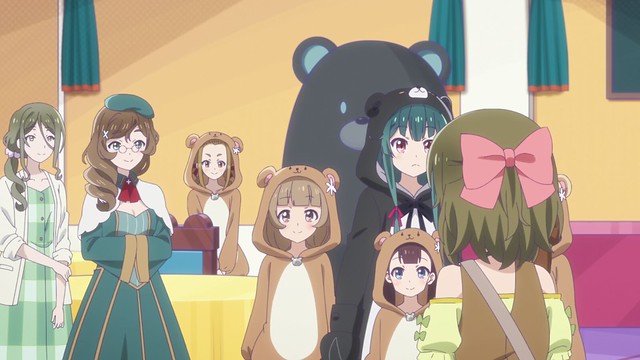 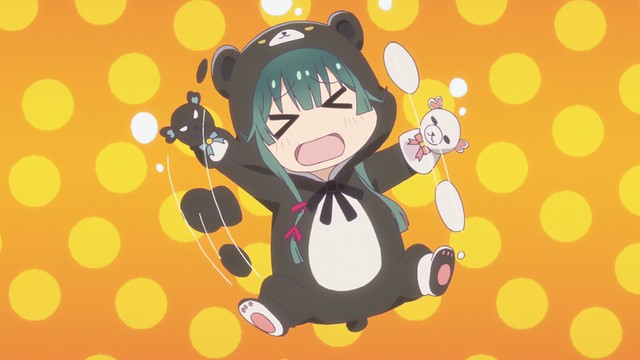 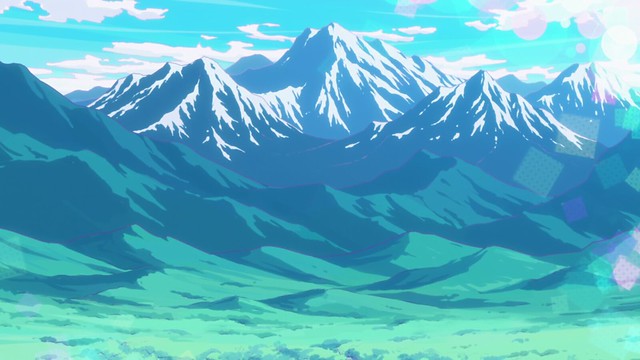 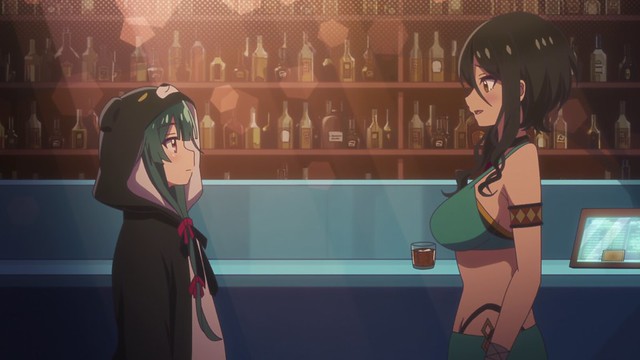 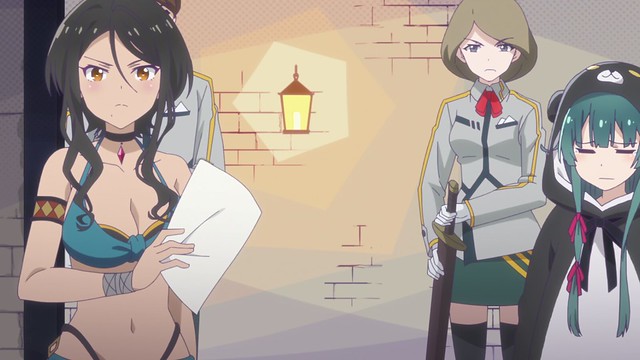 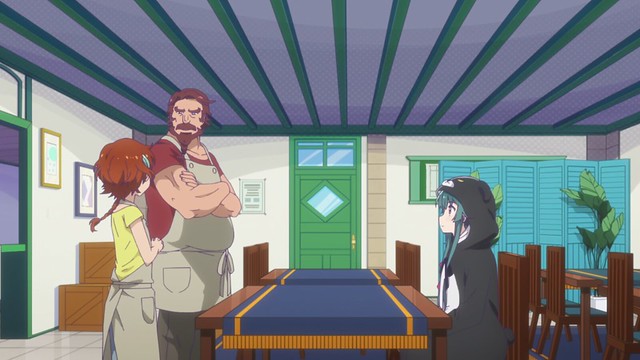 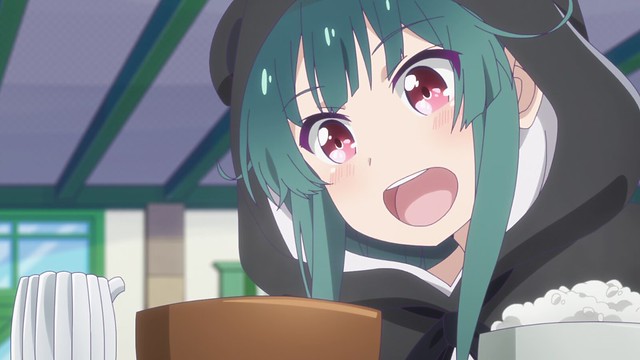 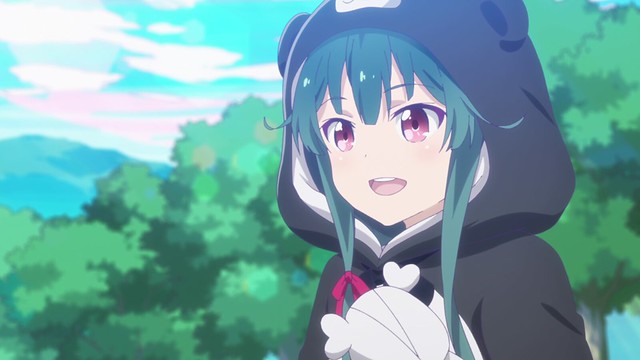 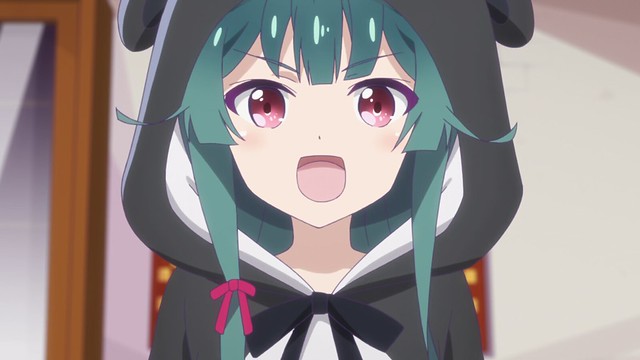 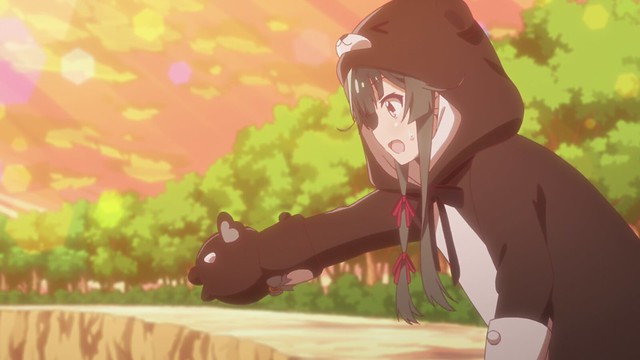 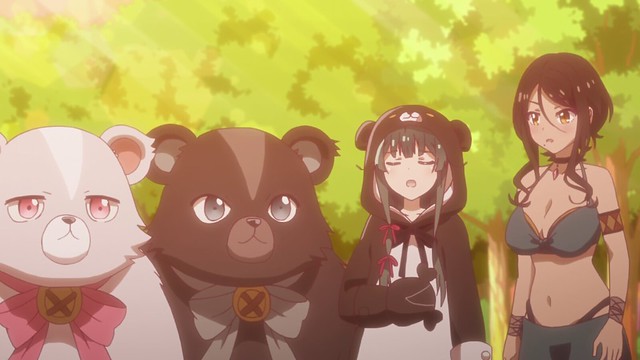 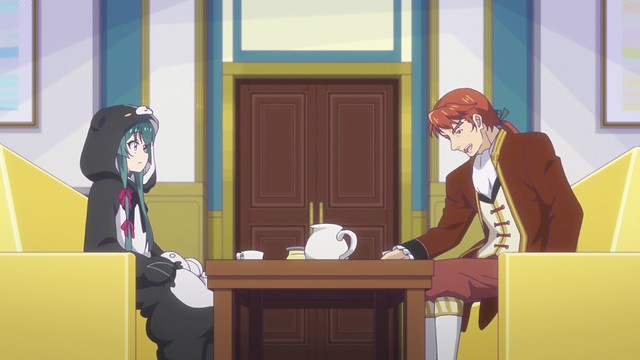 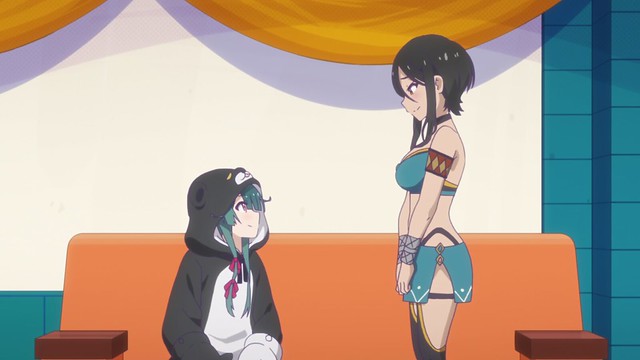 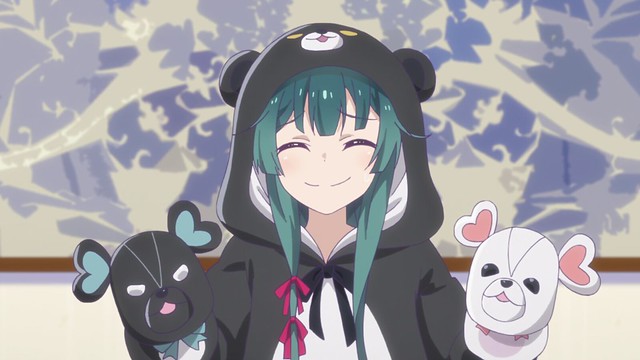 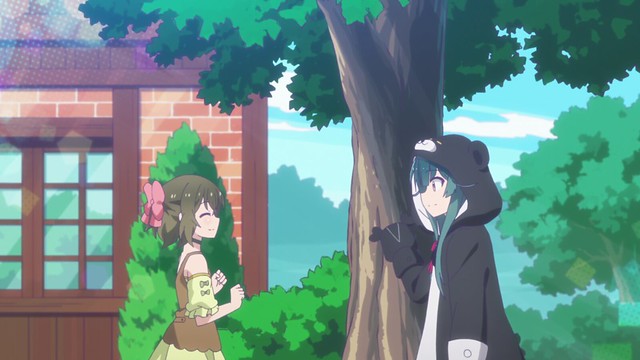 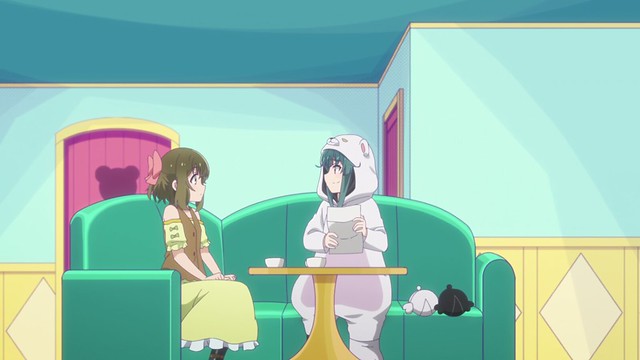 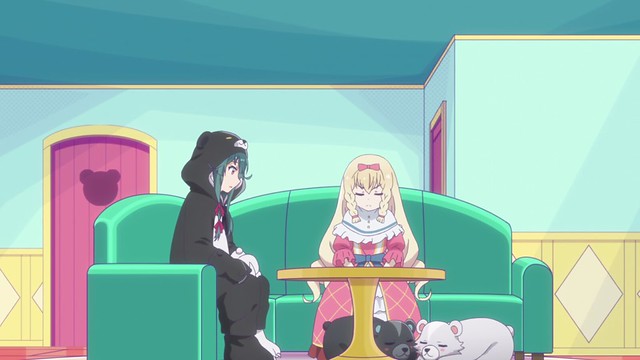 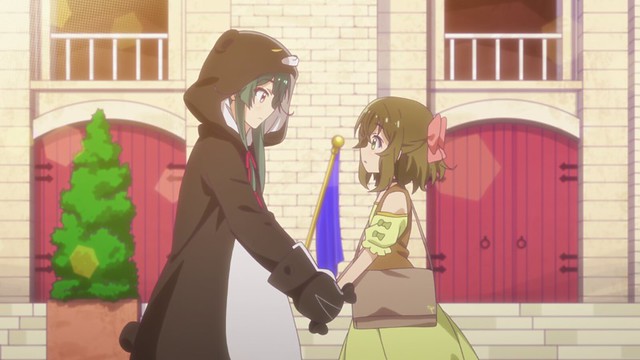 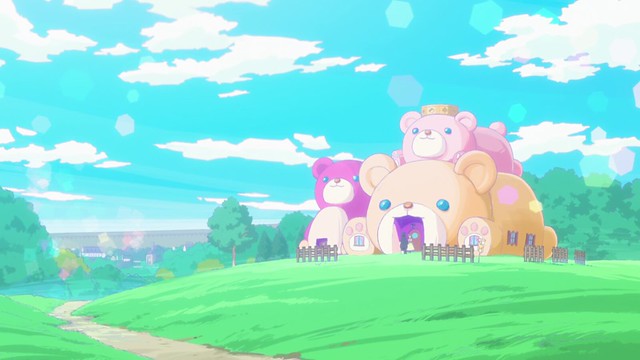 Altogether, Kuma Kuma Kuma Bear is an amusing series. However, the series did require some time to pick up momentum: the first episode drops viewers into Yuna’s new world without any context, only establishing that she is obscenely powerful, and suggests that Kuma Kuma Kuma Bear is set entirely in a virtual reality game. When Yuna is transported into this world for the first time, the series deliberately blurs the boundaries: it is left ambiguous as to whether or not Yuna’s new world is an entirely new universe, or still within the realm of a VR game she simply chooses not to log out of. As time wears on, Kuma Kuma Kuma Bear dispenses entirely with the real world; Yuna’s experiences are set entirely in the same world as Fina and the others. The complexity of interactions between Yuna and the other characters indicate the series is more isekai than about a VR game with other players. This sort of ambiguity was the source of no small debate earlier during Kuma Kuma Kuma Bear‘s run, and the anime would have benefited from either a more linear introduction. Rather than starting in the new world, the first episode could have portrayed what was seen during the second episode, and then give to viewers a few more hints as to whether or not Yuna is indeed in a parallel fantasy world. Fortunately, once Kuma Kuma Kuma Bear enters its main story, its thematic elements are much clearer: the question of whether or not Kuma Kuma Kuma Bear is an isekai is secondary to the experiences she has while exploring this world. Consequently, Kuma Kuma Kuma Bear ends up being an enjoyable series; folks who are open-minded and set aside questions about the nature of Yuna’s world will find that the series does an excellent job of showing how, regardless of which world one is in, human contact is of great importance. Kuma Kuma Kuma Bear is a series that has found success, being a series whose shortcomings are outweighed by what it does well.