World Witches: Take Off!- Review and Reflection At the Halfway Point

“If you can’t laugh at your life, then your life is a punch line in a bad joke.” –Andrew Barger

After their successful destruction of the Neuroi in the Rhineland, the 501st part ways, with Yoshika staying behind with Minna, Gertrude and Erica at St. Trond base. Public relations forces them to shoot a movie about the 501st’s heroics, although with everyone gone, Gertrude decides to do a film around Yoshika’s exploits. Circumstance soon puts Minna in touch with the other members of the 501st, although things don’t go as smoothly as they’d like for Gertrude’s film: Perrine and Lynette are still hard at work restoring Gallia, while Charlotte and Francesca have gotten into a spot of trouble in Venezia after claiming to have blown away a Neuroi. Meanwhile, in Fuso, Hikari prepares to head over to Orussia with Takami, but when Takami accidentally spills ketchup on herself, is flown back to Fuso, leaving Hikari to join the 502nd. While the 502nd are initially hesitant, Alexsandra and Gundula conclude that having an extra Fuso Witch around could be good for publicity and help their group out with funds, which is always a problem on account of how Nikka, Naoe and Waltrud conduct themselves. Upon joining, Edytha sets about training Hikari, noting that those three are probably the most dangerous people around the base, second to only Alexsandra, who is lecturing Naoe about her actions. World Witches: Take Off! is a continuation of 2019’s Strike Witches: 501st Joint Fighter Wing Take Off!, being a light-hearted parody of the Strike Witches series and stripping out the Human-Neuroi War in favour of what happens when the Witches are allowed to purely bounce off one another. Like its predecessor, World Witches: Take Off! episodes run for thirteen minutes at a time, and are loosely connected by a story, but otherwise, emphasises crude comedy above all else.

Insofar, World Witches: Take Off! has chosen to portray the 501st and 502nd quite separately. Every week, the focus alternates between the two Joint Fighter Wing groups; with the 501st, their antics are now well-established, and a familiar sight for anyone who’s seen Strike Witches: 501st Joint Fighter Wing Take Off!. The inclusion of the 502nd is what’s new to World Witches: Take Off!, but rather than dropping viewers straight into things, this series of shorts has instead chosen to re-tell the story in a more humourous light to show the more comedic side of the 502nd. Here, World Witches: Take Off! demonstrates a knack for being able to recount stories with a hilarious twist to them. In particular, the misunderstanding that causes Takami to be sent back to Fuso results from Hikari misunderstanding Takami, and after an accident involving ketchup, things seemingly become too serious to ignore. The ensuing chaos transforms Hikari into a blubbering mess, which is simultaneously piteous and adorable. Moments like this typify the Take Off! series’ ability to convey both humour and that warm, fuzzy feeling associated with small animals during its run. Halfway into World Witches: Take Off!, familiar faces come back in an all-new setting to create comedy, and for fans of Strike Witches looking for a little something to tide them over while awaiting Luminous Witches, the next big project, World Witches: Take Off! fits the bill nicely enough. 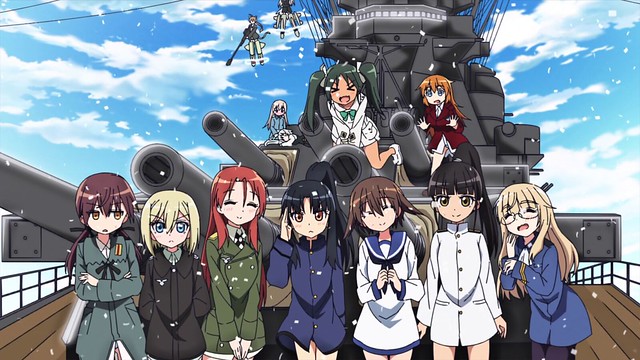 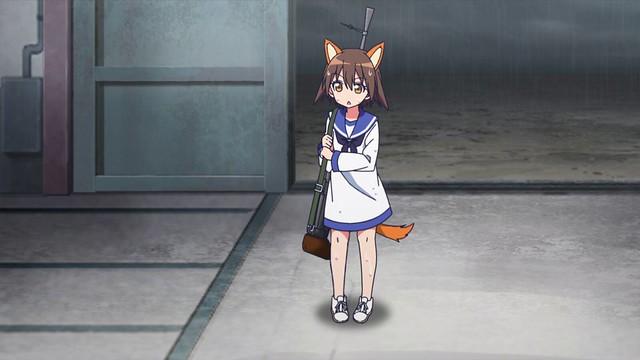 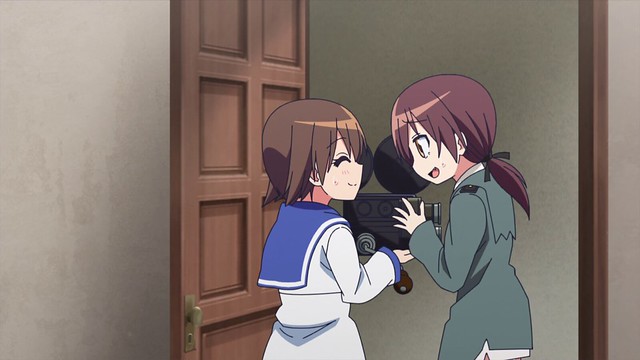 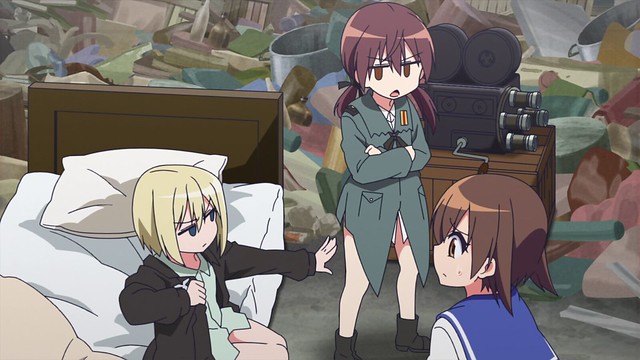 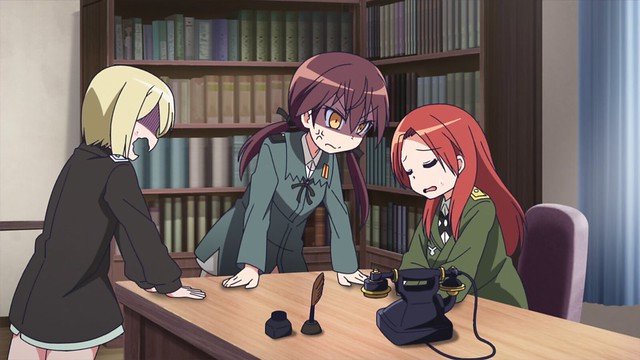 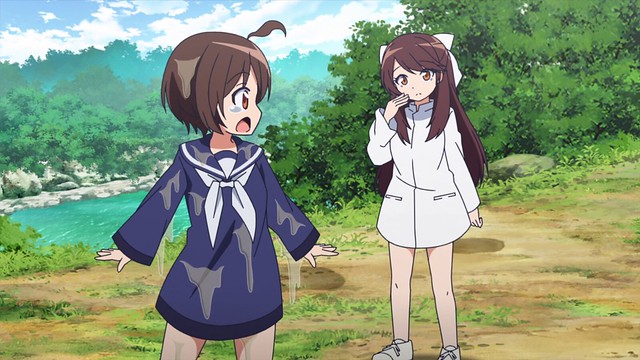 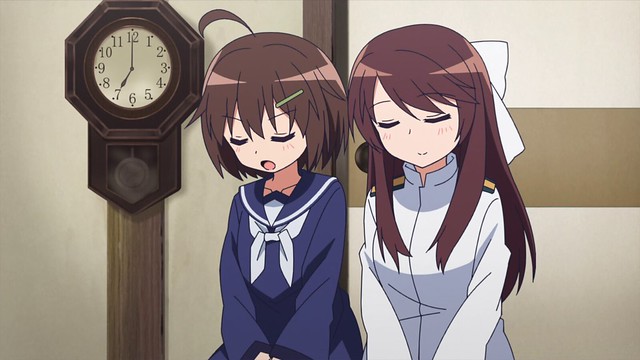 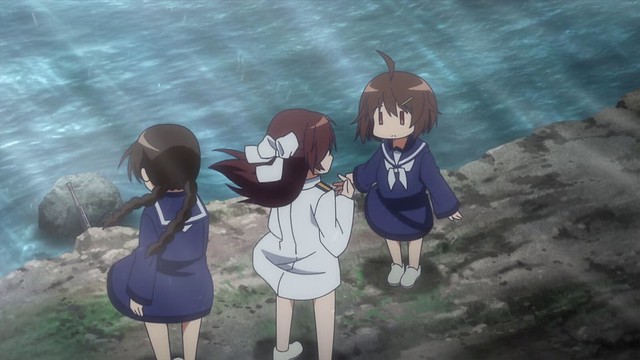 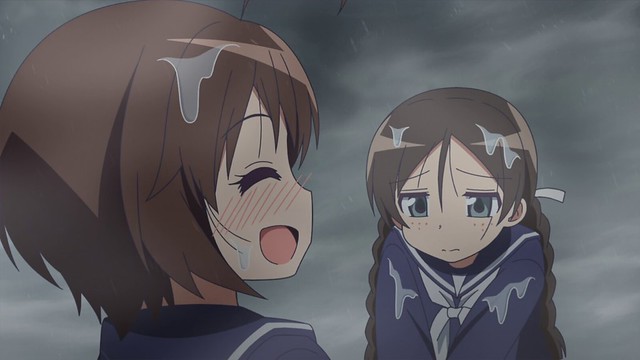 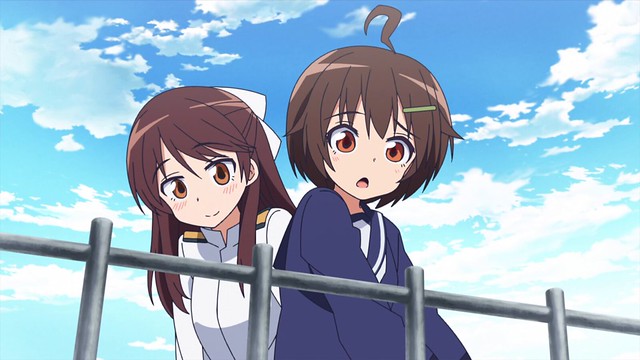 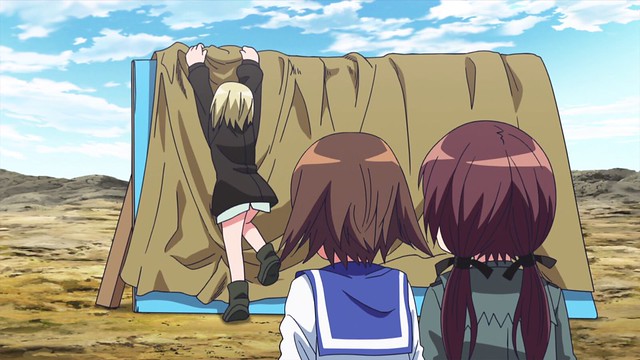 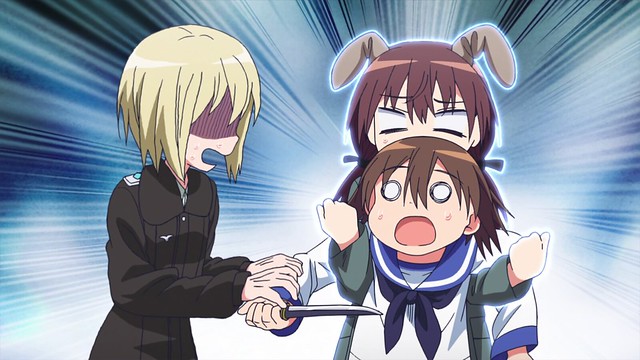 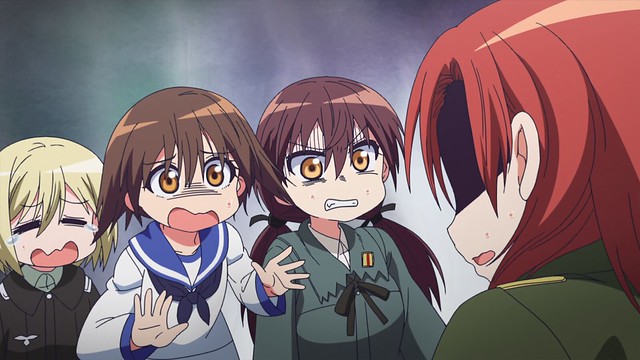 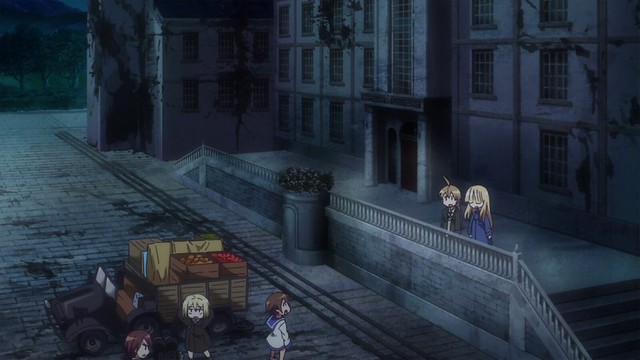 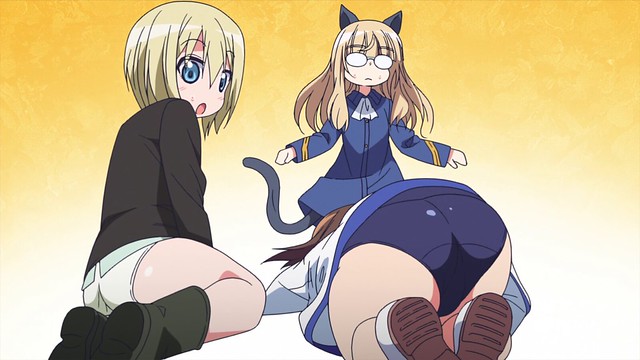 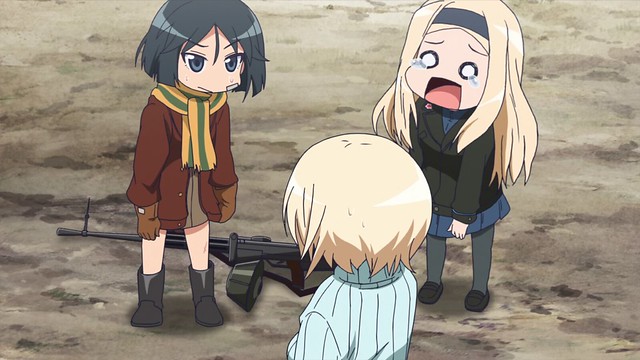 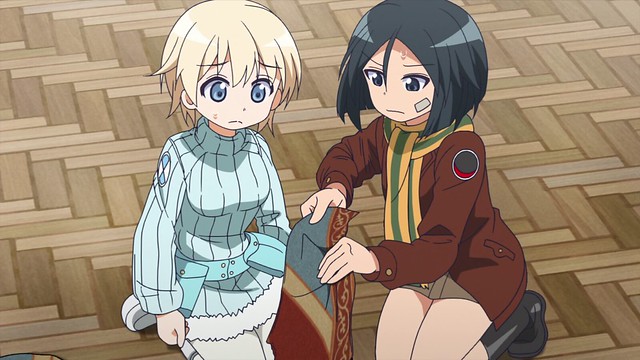 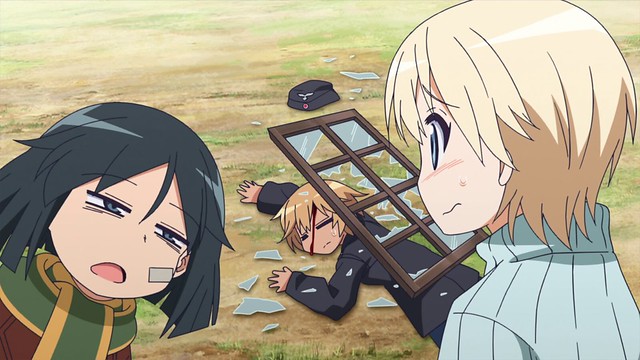 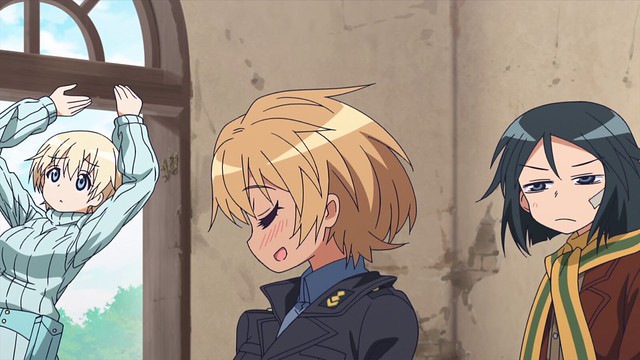 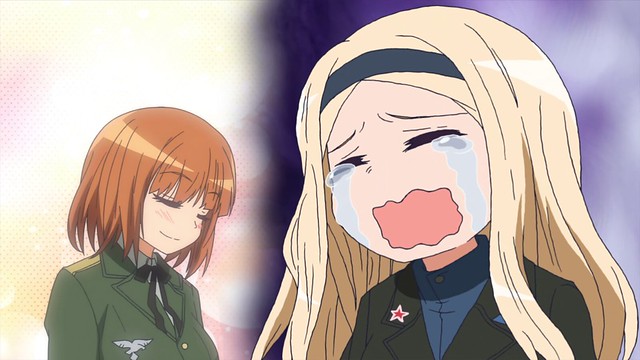 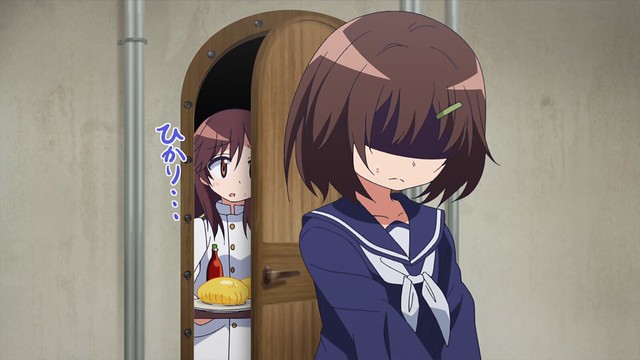 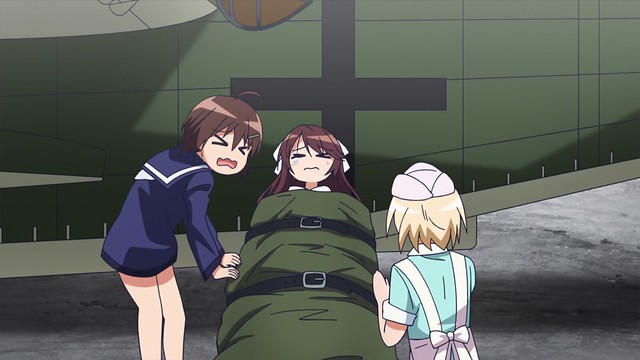 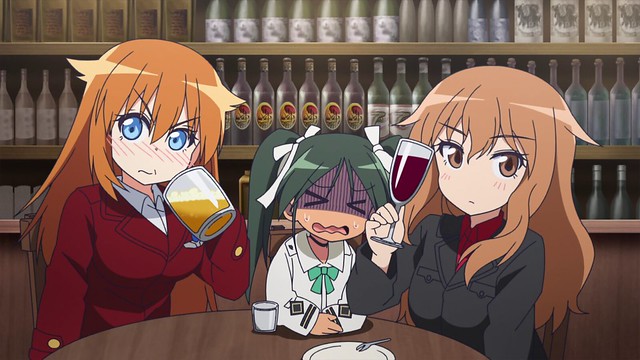 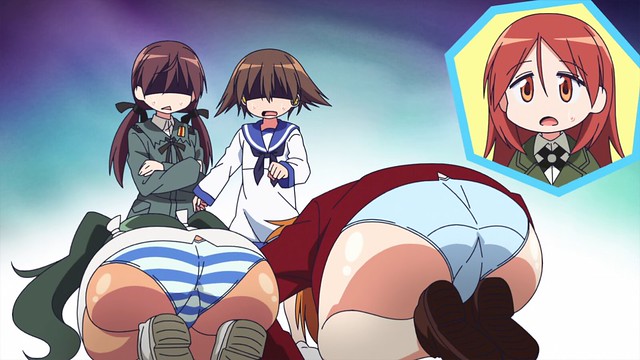 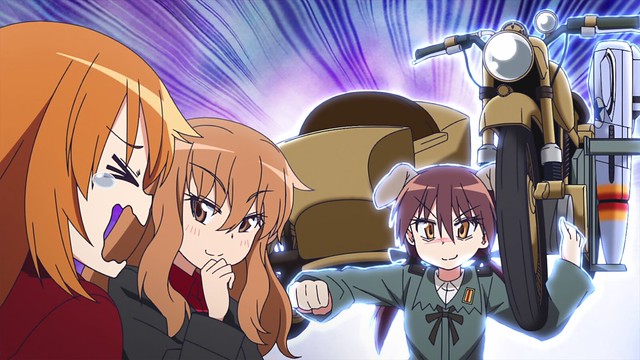 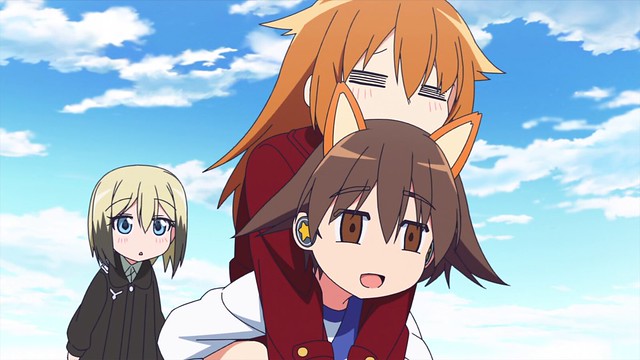 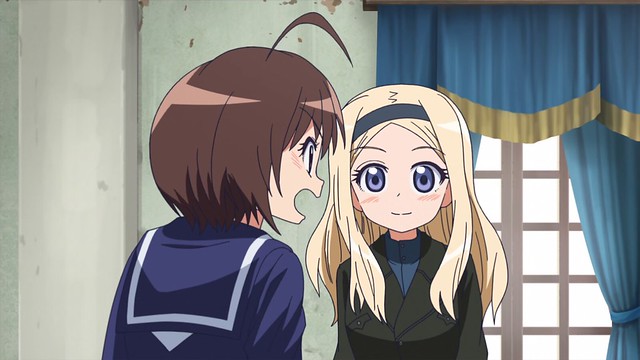 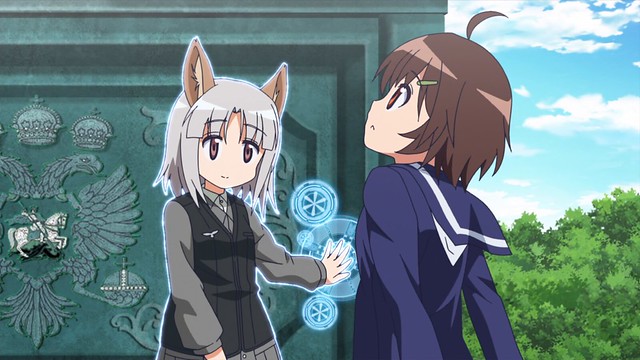 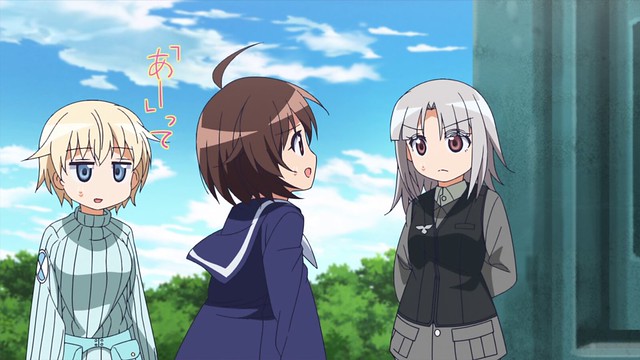 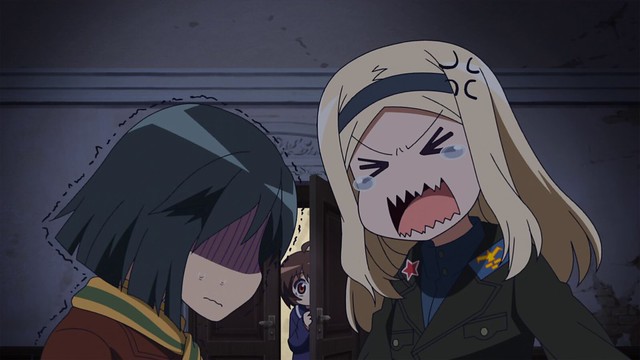 The biggest element that’s been missing so far from World Witches: Take Off! is the actual meeting of the 501st and the 502nd. The opening sequence suggested that World Witches: Take Off! would be about the wild adventures and zany antics that could only come from such a large, varied cast coming together and bouncing off one another. Things like watching Eila suffer as Sanya speaks with more people, or Waltrud messing with members of the 501st presents an opportunity to create humour that is unparalleled. However, at the halfway point, World Witches: Take Off! shows no sign of having the 501st and 502nd meet. Time will tell as to whether or not a meet-up between the 501st and 502nd become a reality; I imagine that many viewers, myself included, would be quite keen to see this because it represents a chance to take the characters in a hitherto unseen direction and create new humour that is only possible with everyone and their unique characteristics. Having said this, World Witches: Take Off! has done a reasonable job of creating laughs insofar, and this series, while certainly not for anyone just entering the Strike Witches world (or have an aversion for bad jokes), is similar to Strike Witches: 501st Joint Fighter Wing Take Off! in that it provides outrageous moments of hilarity for the viewer, while at the same time, providing a glimpse into what life is like for Witches when they’re not training or sortieing to deal with the Neuroi threat.