Non Non Biyori Nonstop Review and Reflection at the ¾ mark

3 Comments Posted by infinitezenith on March 7, 2021

“No one is perfect – that’s why pencils have erasers.” –Wolfgang Riebe

Despite her best efforts, Natsumi fails to impress her mother during Asahigaoka Branch School’s Parents’ Day Event. When Renge runs into Shiori and the two play together, Shiori asks questions that stump Renge. Natsumi later runs into Renge, who’s trying to catch a freshwater crab. She decides to go retrieve an unused fish tank from home and helps Renge to set up a tank for her newly-caught freshwater crab. Impressed with Natsumi’s handiwork and happy that Natsumi looked after Renge that afternoon, Kazuho invites Natsumi over for dinner. With graduation and the transition to post secondary fast arriving for the third year students, Akane worries that Konomi will no longer be able to join her for club activities. She runs into Konomi after club ends for the day, and it turns out Konomi’s keen on checking out a summer festival before heading home, looking to pick up some souvenirs for Natsumi and the others. She and Akane end up having a great time, and before parting ways, Akane tells Konomi about how she feels, thanking her for their time together. It turns out that Konomi had already been admitted to her post-secondary of choice, allowing her to spend more time with Akane. Konomi later witnesses the sort of trouble Natsumi goes through to keep out of trouble despite her misdeeds during a sleepover with the Koshigayas, and later, while having Akane over, gives Natsumi, Komari, Renge and Hotaru a chance to hear Akane play the flute. On a quiet afternoon, Komari decides to stay home while Natsumi and Suguru hit the department store. She ends up hiding in the closet after she is unsuccessful in capturing a weasel that’s broken in, coincidentally timed with a series of mysterious calls to the land line. When Komari and Hotaru decide to exchange knitted gifts, she decides to ask Natsumi to help her present the failed creations to Hotaru. Natsumi is unable to creatively do so, and Komari admits she’d failed. Hotaru suggest they knit together. Later, Komari decides to make dinner to prove to Natsumi she can indeed cook, but when things begin going south, she accepts her mother’s help, ultimately creating a curry that Natsumi finds delicious. This is Nonstop nine episodes in, and with three quarters of the season now complete, Nonstop has taken the effort to continue engaging viewers.

Non Non Biyori‘s cast has grown since the series began running; Konomi is now a more regular character in the series, and the addition of Shiori and Akane means there is no shortage of adventure. With these additional characters, Nonstop nonetheless has taken the time to show viewers different sides to everyone. Shiori is a bright and inquisitive child with an endless curiosity for why things are. Akane is actually a capable flautist who’s kind to those around her in spite of her nerves. She’s become better with new people and become closer to Konomi, slowly taking those first steps towards being more sociable. Konomi is the ever-reliable senior who looks out for everyone around her, but also knows where to draw the line (she wants no part in Natsumi’s get out of trouble scheme during their sleepover). Despite new characters stepping into the spotlight, Nonstop has not abandoned its core characters, either: Natsumi is given a chance to shine when she expertly sets up a fish tank for Renge and her newly caught freshwater crab, after a humiliating showing during Parents’ Day, and Komari is shown as being more mature than her normal mannerisms suggest. Unlike Natsumi, Komari is not too proud to admit when she’s failed and accept help: despite her ineptitude with knitting and cooking, she is able to see where her limits are. Being able to swallow one’s pride is very much a part of growing up, and so, it was great to see Komari both express this, as well as actively learning to better herself, whether it’s accepting Hotaru’s invitation to knit together or asking her mother about how to properly create a tasty curry. As the characters are given a chance to shine in Nonstop, they become increasingly life-like, with their experiences continuing to act as relatable and relevant life lessons about the small things in life that are overlooked. 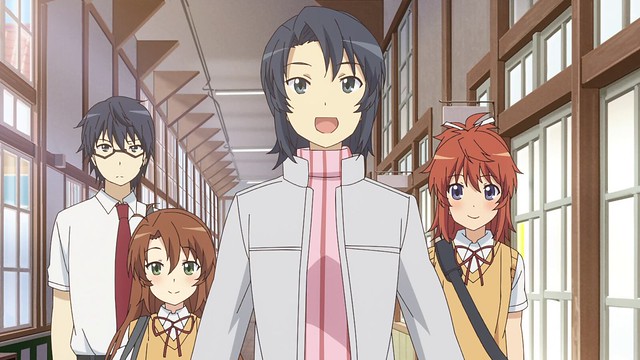 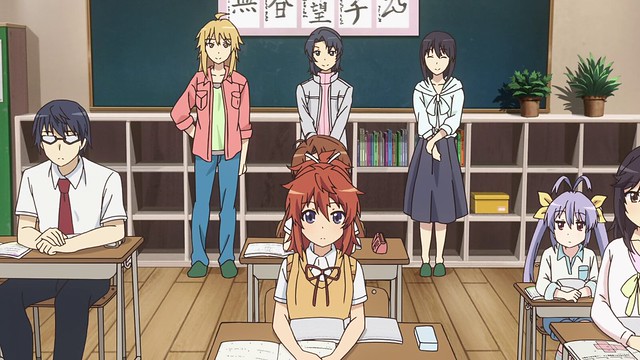 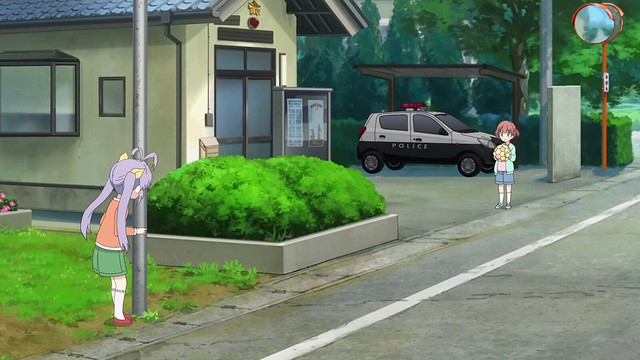 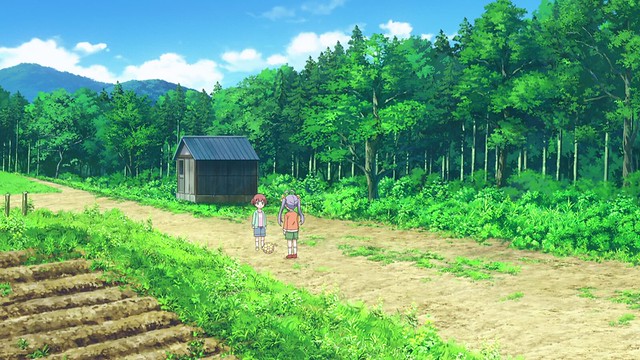 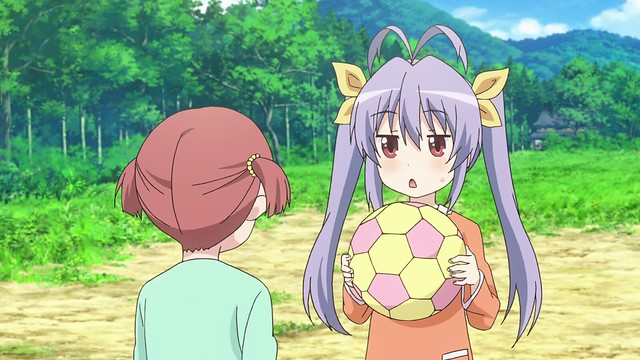 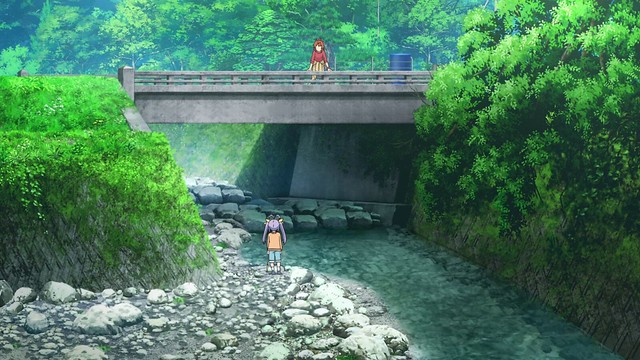 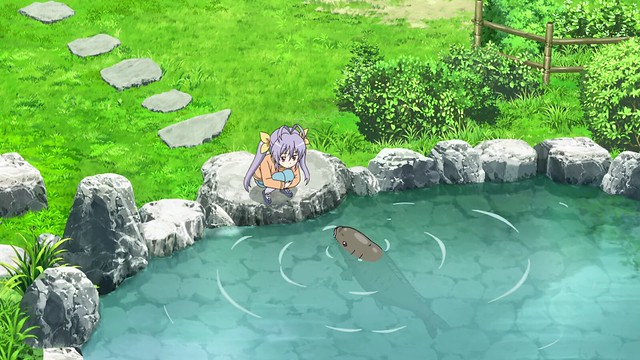 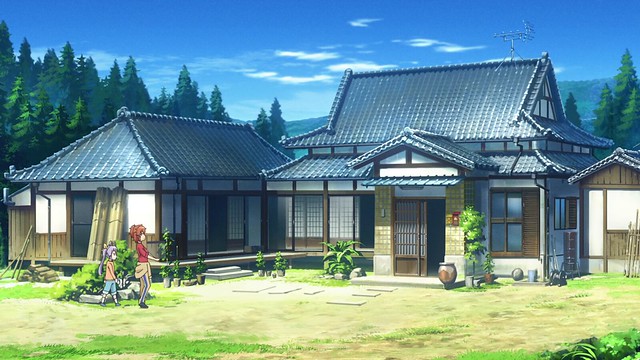 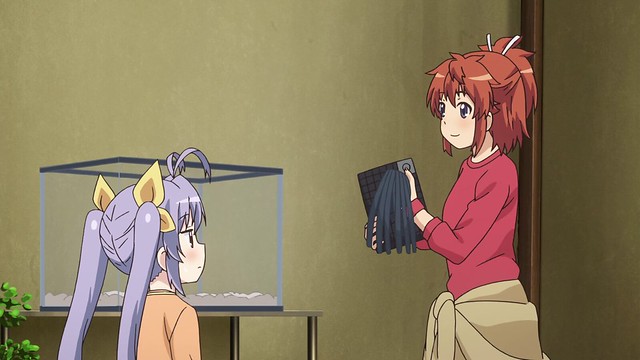 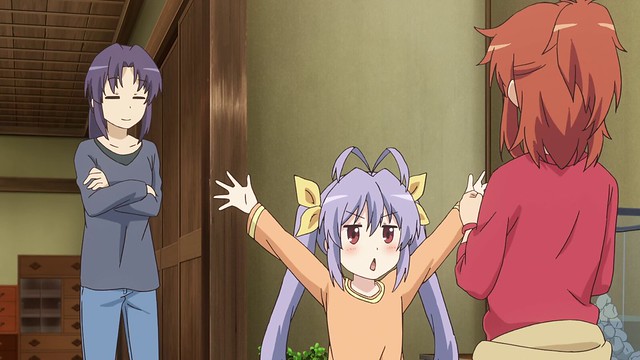 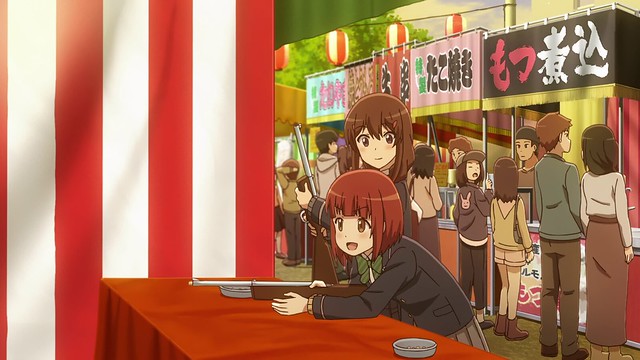 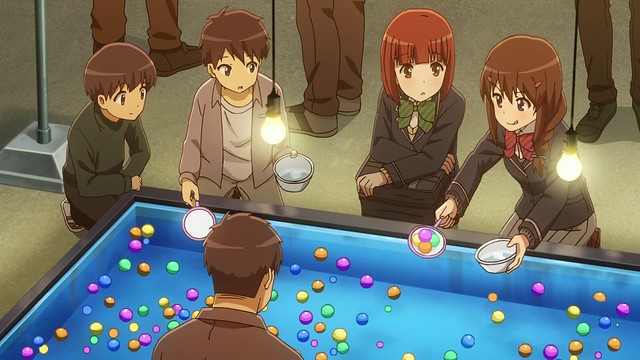 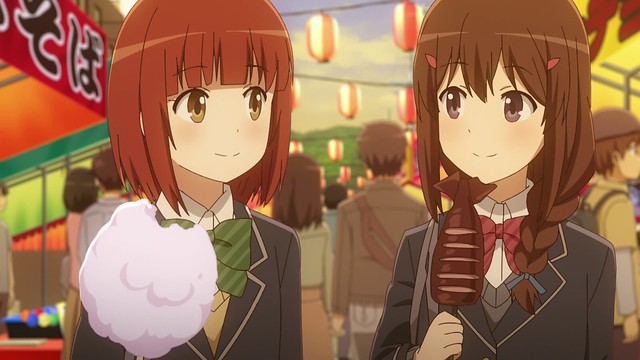 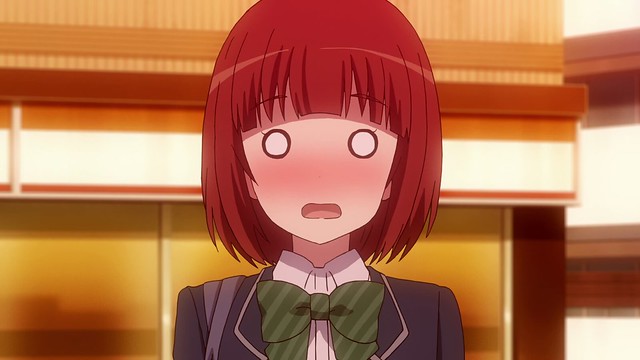 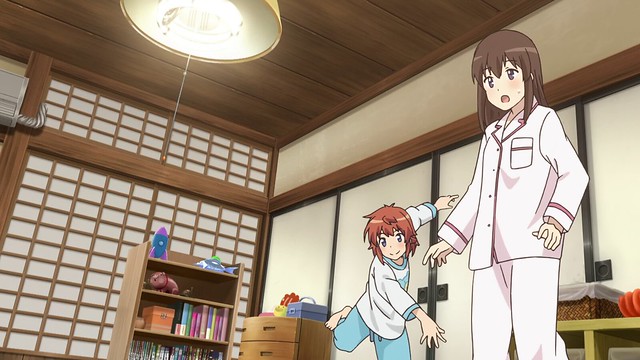 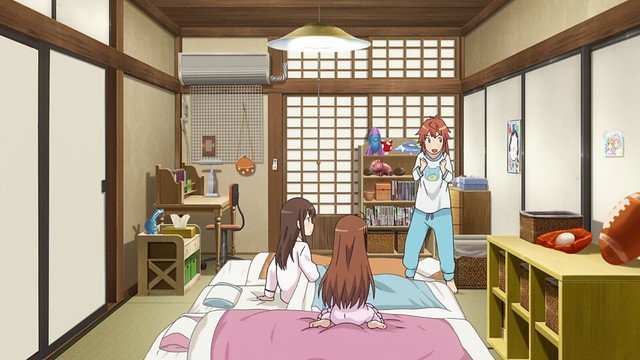 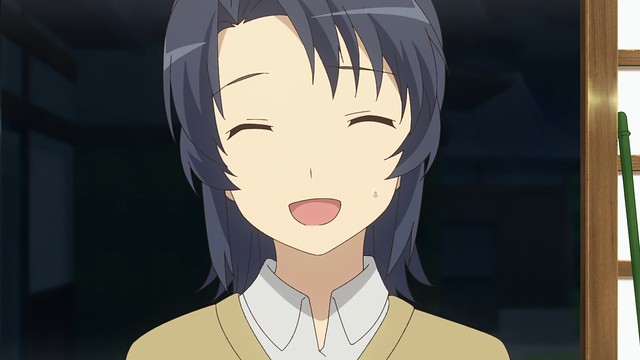 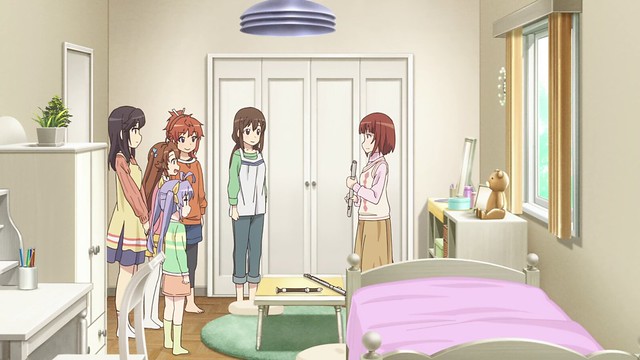 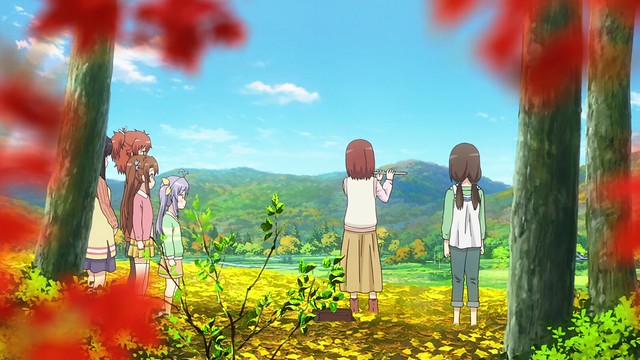 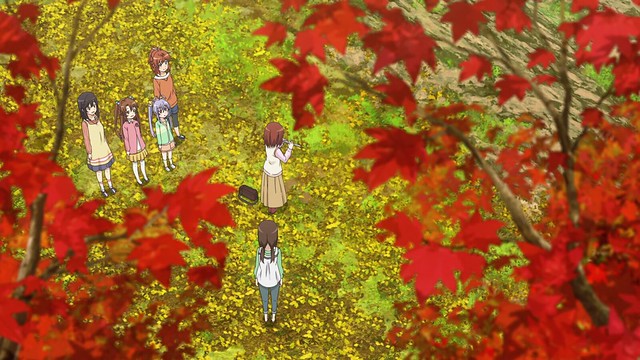 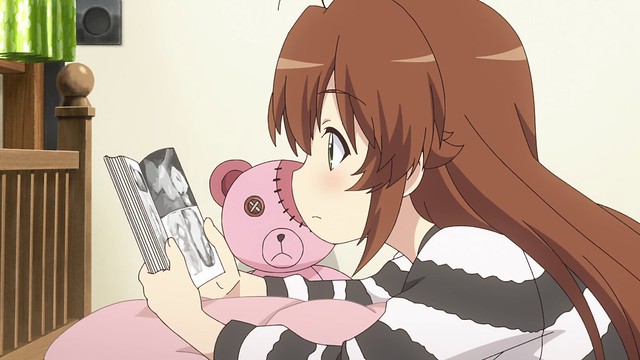 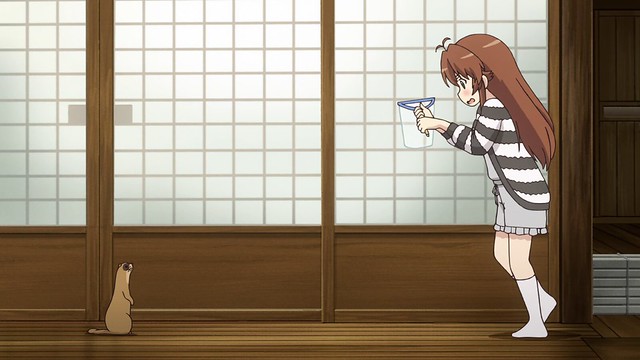 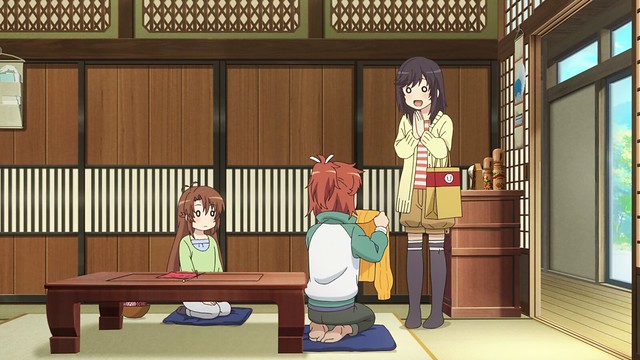 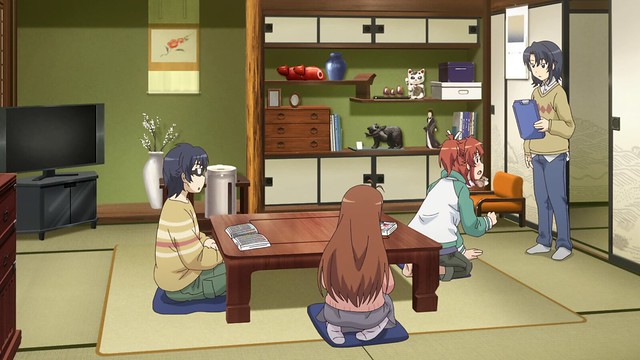 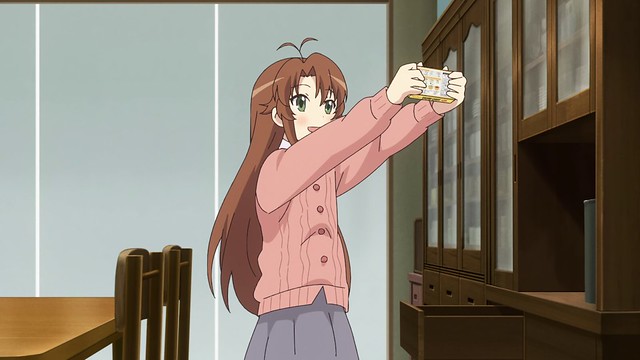 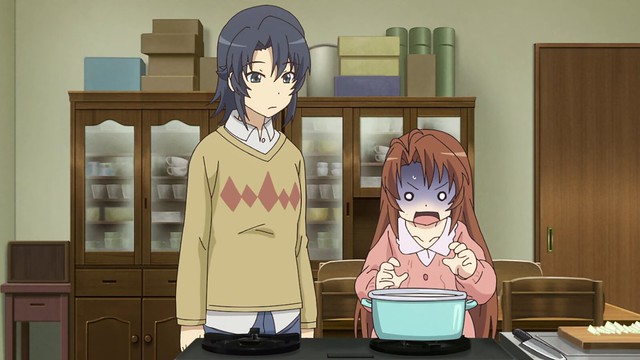 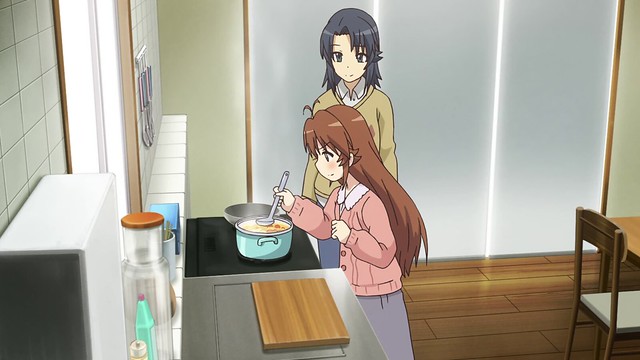 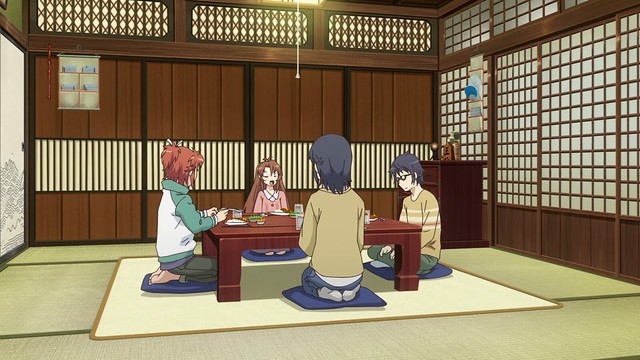 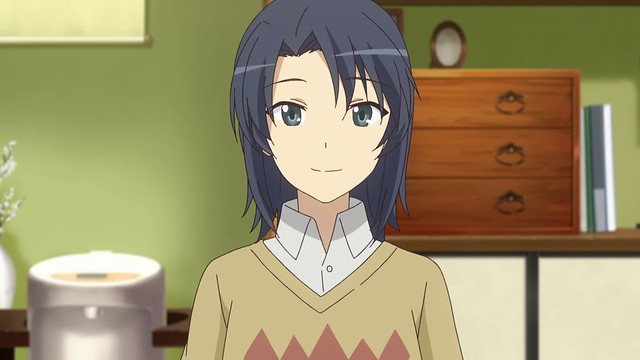 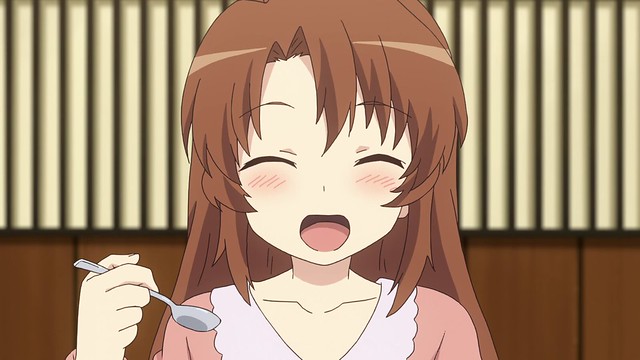 Non Non Biyori originally had the seasons as being the primary backdrop for Hotaru and her friends; after moving to Asahigaoka, she explores the local specialities, goes on summer vacation with new-found friends, settles in to a new term as the leaves yellow, and marvelling at the snowfalls of winter. However, as Non Non Biyori continued, the seasons become a familiar cycle, and it is the people in Asahigaoka that take centre stage. The end result is a series as expansive as a child’s imagination, exploring topics and ideas that we often take for granted: from hilarious misunderstandings to common mistakes, new discoveries and adventure, Nonstop covers a considerable amount of ground during its third quarter. The range of scenarios seen are never overwhelming, inviting viewers to slowly take everything in, and in doing so, imparts a stronger impression than had everything been handed over to viewers on a plate. Because we are now entering Nonstop‘s final quarter, I expect that winter will arrive in Asahigaoka, allowing Non Non Biyori to portray the sorts of things that can only occur when there’s a chill in the air, and a foot of snow on the ground. Of course, the imminent arrival of winter means that Nonstop is also fast drawing to a close: it is a little sad to see the series enter its final quarter so quickly. Each and every episode has been a novel, refreshing experience, and it goes without saying that I’ve certainly been having fun with Nonstop this season; I am looking forwards to seeing what winter adventures await everyone in Nonstop‘s final quarter.