Azu-nyan startled the Witch: Revisiting the K-On! Mod for Left 4 Dead 2 and the Classic Campaign

“But, you can always count on her in the end.” –Azusa Nakano

Left 4 Dead 2‘s campaigns also holds a pleasant surprise for players, in the form of the original Left 4 Dead campaigns being available for players to check out. This campaign sees the original group of survivors fighting their way to a hospital, where they hope to catch a ride from a news helicopter. After the helicopter crashes, the survivors make their way to a turnpike and find an armoured vehicle, which they use to reach the town of Riverside. Here, they fight through the sewage system, through a church and the town itself, eventually reaching a boathouse. Later, the survivors make it to a city and decide to head for the airport, fighting past Infected-infested city streets, a construction site and eventually, the airport terminal itself. Upon successfully refuelling a C-130, they manage to escape. The survivors land in a heavily forested area and make their way past a train-yard, arriving at a farmhouse. Upon radioing the military, the survivors manage to escape when an armoured personnel carrier arrives to pick them up. It turns out the military had been interested in capturing them, as the survivors are asymptomatic carriers of the Green Flu, and seek to study them. However, when the military base is overrun, the survivors escape, making their way to Georgia and eventually, the Florida Keys, where it is hoped that they can find a new home. That Left 4 Dead 2 comes with the complete Left 4 Dead campaigns and its original survivors in a refreshed environment was most enjoyable indeed, and being able to play through the original game’s levels with the additional weapons, consumables and infected from the newer game demonstrated that the Left 4 Dead mechanics have worked very well. As with my last play-through of Left 4 Dead 2, I’m running with the K-On! mods that allow me to substitute the base survivors for Azusa, Jun and Ui: the model for Nodoka remains incomplete at the time of writing, but the mod has seen additional improvement to voices, resulting in a doubly entertaining experience. As with the Left 4 Dead 2 campaign, having K-On! characters means improved visibility and differentiation between allies and infected, making the missions a bit easier to go through.

Unlike Left 4 Dead 2, whose campaign was largely set in the Deep South, more levels of Left 4 Dead‘s campaign is set in environments by nightfall, creating a much more compelling and gripping environment where enemies’ appearances are more unpredictable and terrifying: everything is shrouded in darkness, necessitating slower, more methodical movement. Left 4 Dead may have a more generic set of locations in urban areas, but the familiar setting, in conjunction with a zombie outbreak, creates the sense of unease that the unfamiliar is lurking around every corner. More so than the humid, muggy conditions of the Deep South, Left 4 Dead‘s choice of location and lighting results in a more convincing atmosphere. With the updated graphical style and visuals of Left 4 Dead 2, classic environments are sharpened and made more detailed without compromising their original aesthetic. The end result is that the Left 4 Dead campaigns end up being rather more successful in conveying terror through its ambience far more than the Left 4 Dead 2 campaigns, which ended up being a little more corny and humour-driven by comparison. The sharp contrasts between the aesthetics of Left 4 Dead 2 and Left 4 Dead levels are noticeable, but the actual campaigns themselves still handle as one would expect from Left 4 Dead 2: for folks who became accustomed to playing the original, they’ve remarked the originals are more challenging and rewarding to beat. Conversely, as someone who’s still relatively new to Left 4 Dead, I found that Left 4 Dead 2‘s inclusion of the original campaigns greatly extended the sequel’s replay value, as well as giving new players a chance to play old and new maps alike depending on their inclinations. On top of smoother mechanics and more options in-game, Left 4 Dead 2 remains the game of choice to pick up owing to its support for mods, which was the primary reason why I ended up returning to check out the Left 4 Dead campaigns to begin with; it’s not every day one gets to slaughter zombies with Azu-nyan, Ui and Jun as squad mates, after all. 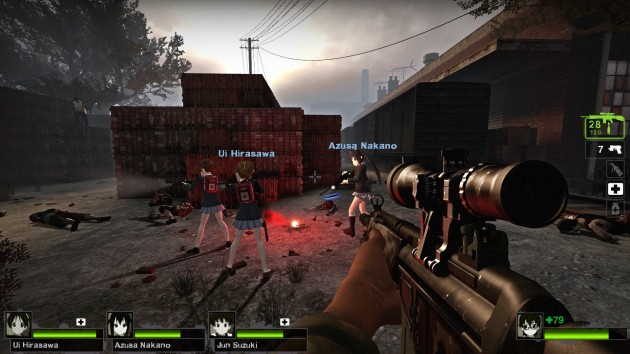 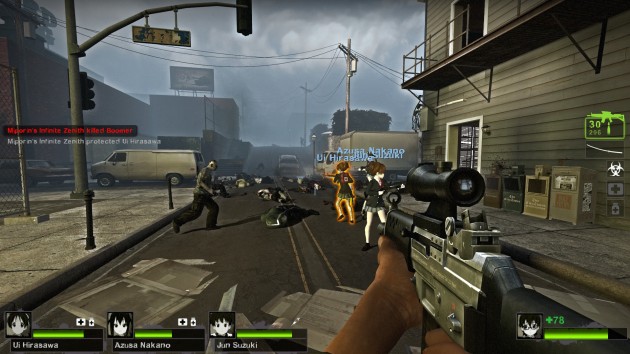 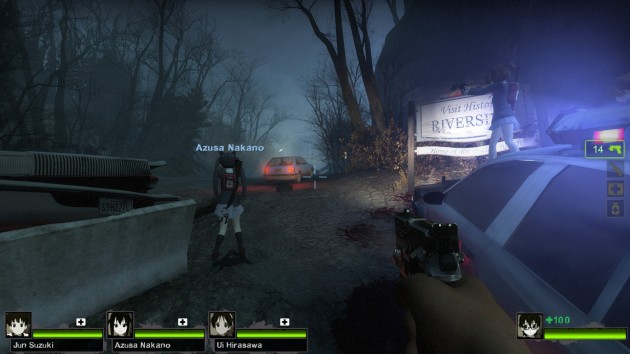 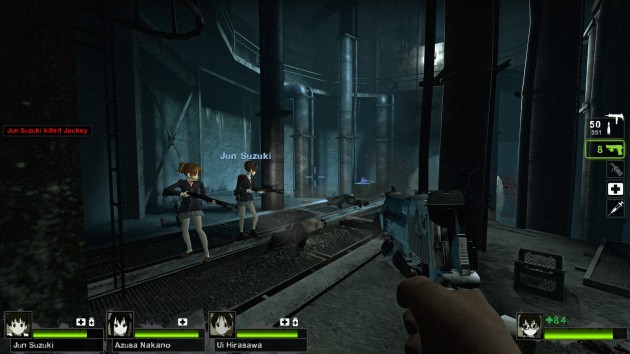 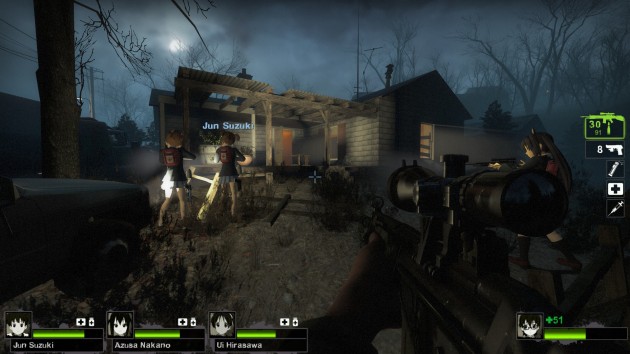 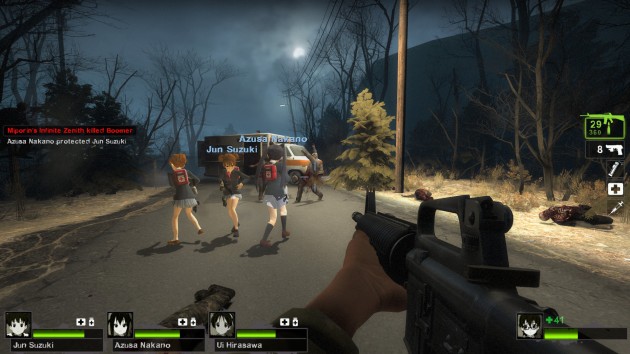 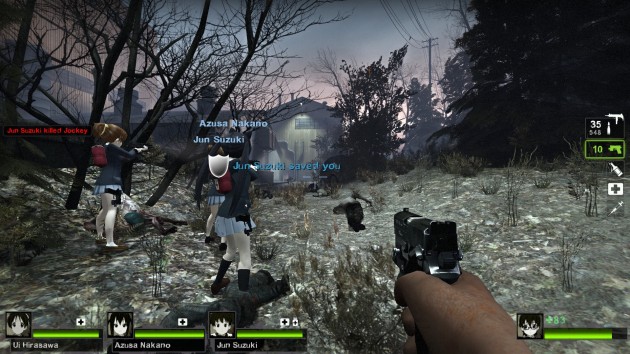 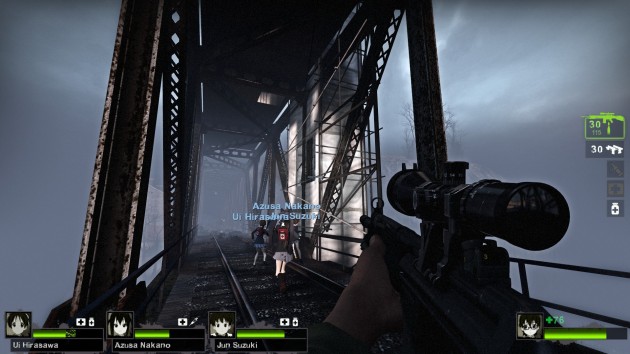 With all of the major Left 4 Dead 2 campaigns now finished, this journey has been one that’s been a shade under eight years in the making: the presence of mods has been an instrumental piece of my inclination to pick Left 4 Dead 2 back up, with the end result that I managed to finish a game that I’d all but forgotten about. The presence of K-On! mods for Left 4 Dead 2 also had another side effect: it brought back numerous, pleasant memories I have of the K-On! franchise, leading me to check out the K-On! Come With Me concert and revitalise my interest in the franchise’s music, in turn helping me to relax and keep focused during a somewhat stressful February. Familiarity with Left 4 Dead 2 also means I’m now able to keep up with my friends where conversation turns towards this game: for the longest time, said friend had been hoping I’d complete the game to an extent where I’d be able to offer insights on the mechanics and provide thoughts on why Valve might’ve made certain decisions in the development process, which results in interesting discussions well beyond what gaming discussion today typically consists of (i.e. the best cosmetics and memes, or complaining about games endlessly for not catering to the individual). At this point in time, I’ve now completely experienced the K-On! mods for Left 4 Dead 2, which was an impressive and commendable effort into bringing one of my favourite franchises together with a survival shooter: the process to get the mod set up and running has been effortless, and really adds dimensionality and fun to a game that I otherwise would’ve just left in my backlog. Having now seen what the K-On! mod has done for Left 4 Dead 2, I do plan on taking things up a notch for the two remaining community missions, Cold Stream and Last Stand. Hopefully, getting those last two community missions done won’t take me another eight years to wrap up this time around!

2 responses to “Azu-nyan startled the Witch: Revisiting the K-On! Mod for Left 4 Dead 2 and the Classic Campaign”