“Cakes are special. Every birthday, every celebration ends with something sweet, a cake, and people remember. It’s all about the memories.” –Buddy Valastro

By the time Ena and the others wake up, it’s close to noon: they stop for sashimi before continuing on with their tour of Izu’s geospots, which includes Dōgashima, Sanshirō Island and concludes at the Mount Daruma Highland. At the Sanshirō Island, while Akari is disappointed to learn a tombolo isn’t edible, she and the Outdoor Activities Club have a fantastic time exploring the natural wonders of this island. After arriving at their campsite, Darumayama Kogen Campground, Chiaki and Ena ask Akari to look after Aoi and Nadeshiko while they go ahead with preparing a birthday celebration for the two. Minami drives them to a hot springs and Cape Mihama to round the day off. While Akari is shocked to learn that Nadeshiko and Aoi had already known about the event, upon arrival, Rin, Ena and Chiaki have prepared a fantastic party for Aoi and Nadeshiko. After the two blow out the candles to their cake, Nadeshiko and Aoi open their gifts, which turn out to be wooden cookware made for camping. Whilst tucking in to dinner, a shrimp and tomato risotto made using broth from the spiny lobster shell, the girls are completely blown away by the intense flavours. Minami receives a phone call from Ryōko, who remarks that it’s fantastic that Minami’s students have allowed her to experience a wider variety of things. Because one more day of travels await Rin and the Outdoor Activities Club, everyone turns in early this evening. The next morning, to watch the sun rise, everyone wakes up early. Akari is still tired, so Minami remains behind to look after her, while Rin and the others climb Mount Daruma, where a breathtaking sunrise awaits them. Thus, Yuru Camp△ 2‘s twelfth episode draws to a close, and surprisingly enough, this was not the season finale. As the twelfth episode drew to a close, a portion of the girls’ itinerary, namely the capybaras, still remain unvisited, and once the episode finished, with a title card for the next episode, it would appear that we are getting one more episode to wrap everything up. This was such an unexpected surprise and accounts for why this post isn’t titled “finale”. With the extra episode, this means that Yuru Camp△ 2 will get to continue with the girls’ adventures for one more episode, making use of the extra run time to ensure that everything that needs to be said and done gets proper shine time.

The twelfth episode’s focus is largely on Nadeshiko and Aoi’s birthday party, which serves to highlight how close Nadeshiko’s become with her new friends. When the episode opened, Nadeshiko and Ayano had been sharing a farewell with one another. Nadeshiko, who’d lived in Hamamatsu all her life, had been sad to leave her hometown and friends behind for Yamanashi, and Ayano promises to visit her when she’s settled in. She also suggests that Nadeshiko pick up something new to make the most of things. This would inevitably set in motion Nadeshiko’s love for camping and put her on a path to meet Rin, Chiaki, Aoi and Ena. Life-changing encounters come from having an open mind, and being made aware of how Nadeshiko had been feeling prior to her arrival in Yamanashi acts as a powerful juxtaposition: in this episode’s events, Nadeshiko is celebrating her birthday with her best friends, attesting to how close everyone’s become in the past few months on account of their shared experiences together. However, this change isn’t just one way: if meeting Rin, Chiaki, Aoi and Ena have allowed Nadeshiko to camp and experience new things, then Nadeshiko’s entry into everyone’s lives have brightened things up, too. Chiaki and Aoi now camp in ways they certainly wouldn’t have considered thanks to Nadeshiko’s energy, and Rin herself becomes more open to group activities. Ena, who’d previously preferred the comfort of her own bed and sleeping in to ludicrous hours, finds herself feeling an inclination to travel more, as well. Minami similarly is grateful for having taken up advising the Outdoor Activities Club, feeling a sense of pride in watching her students learn and mature. This episode of Yuru Camp△ 2 indicates, beyond any doubt, the significance of these fateful meetings; such meetings bring people together, challenge their world-views and ultimately allow people to come out stronger for it. 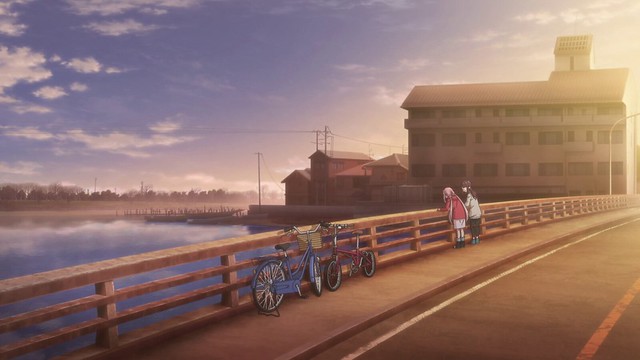 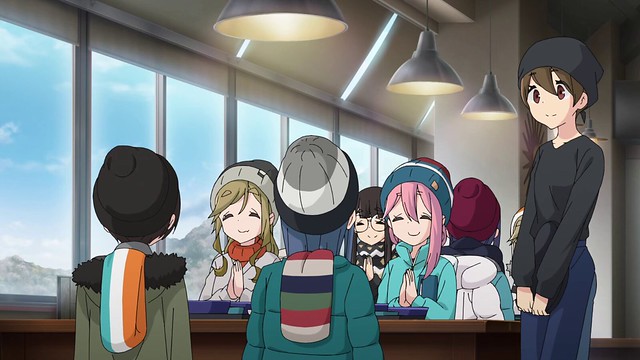 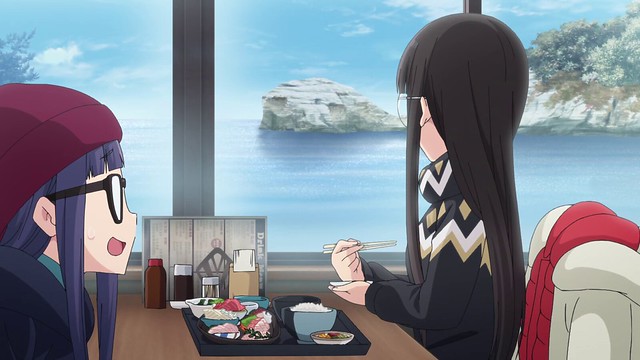 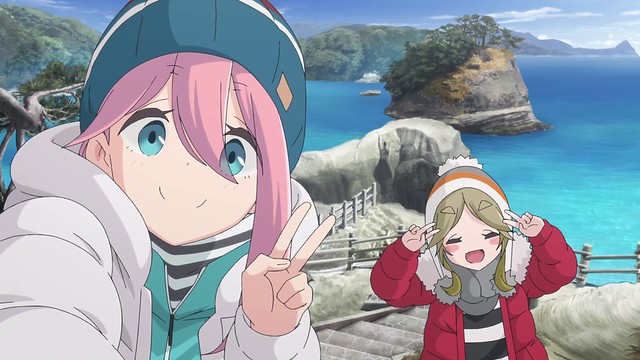 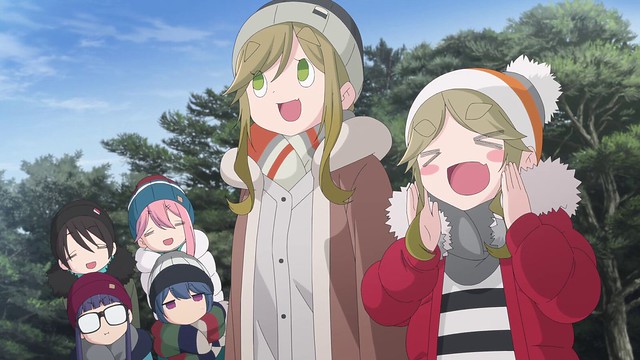 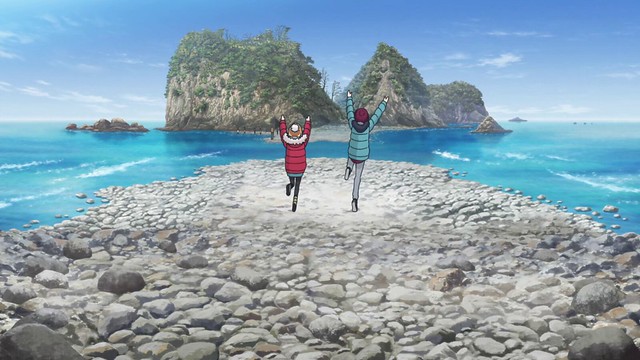 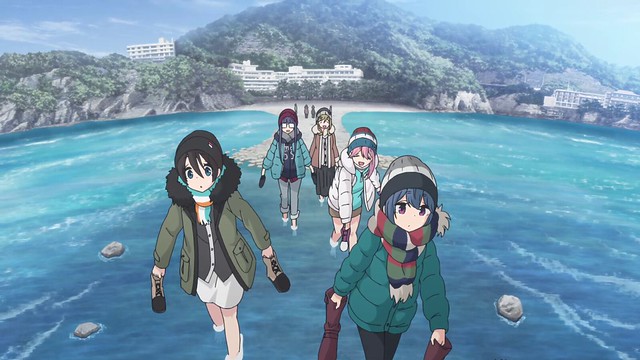 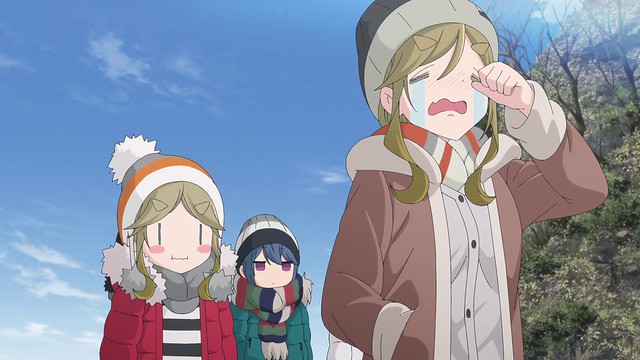 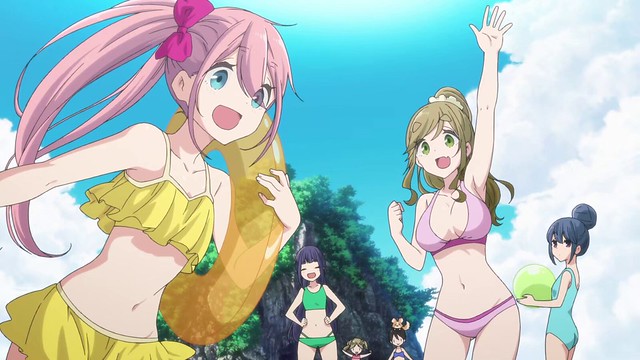 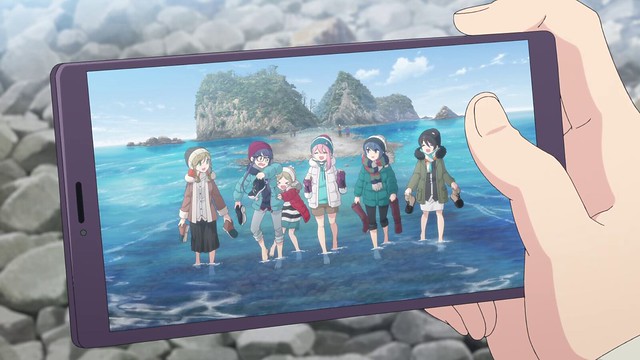 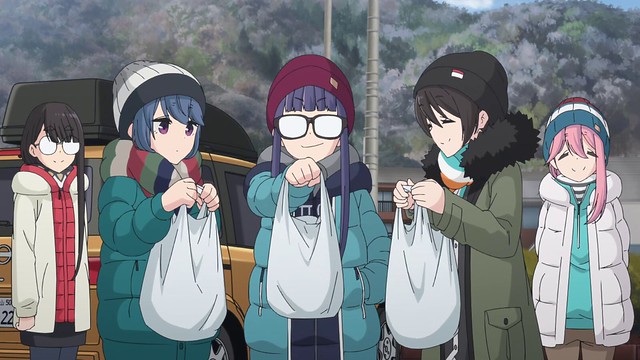 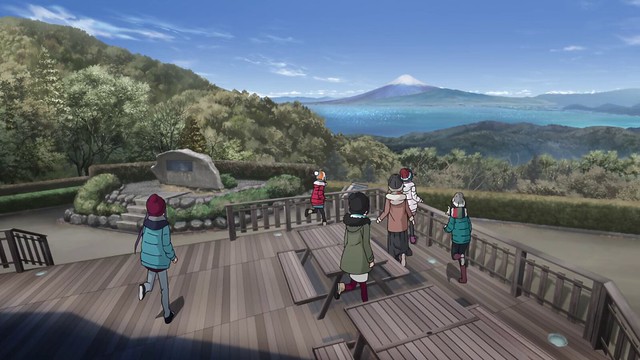 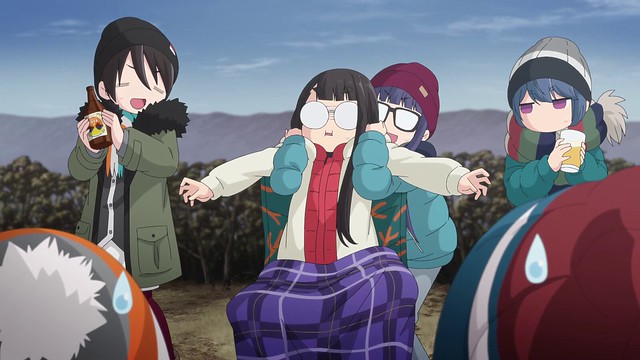 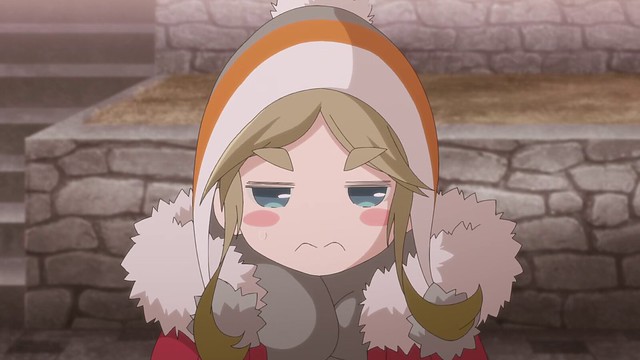 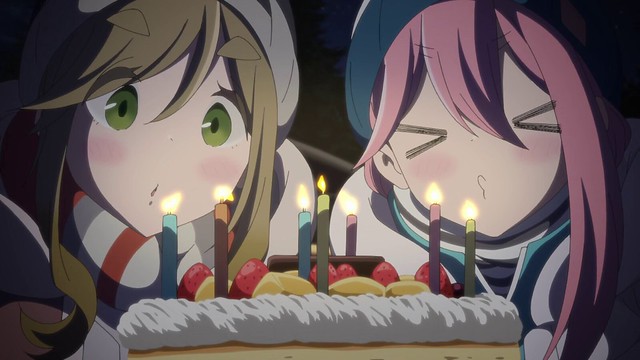 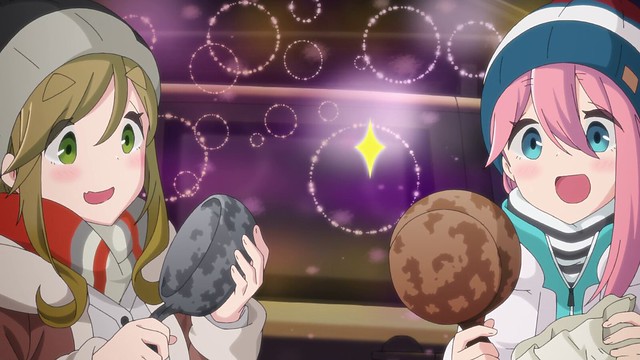 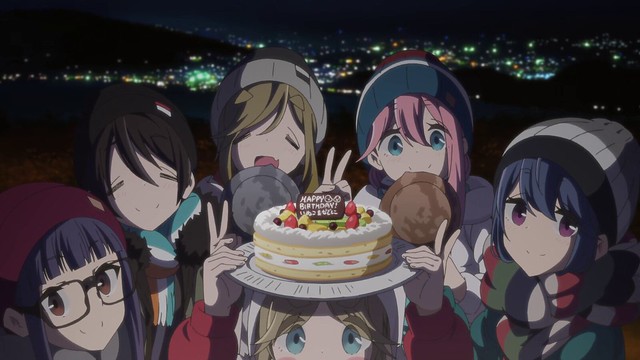 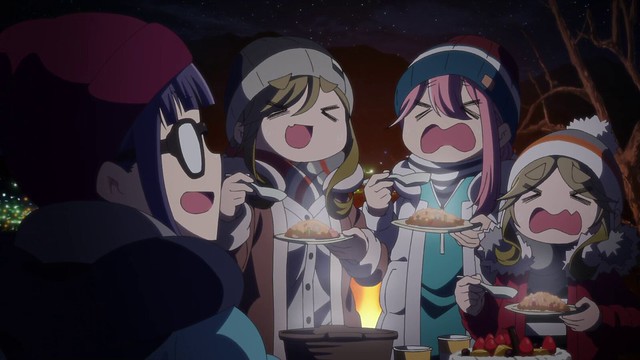 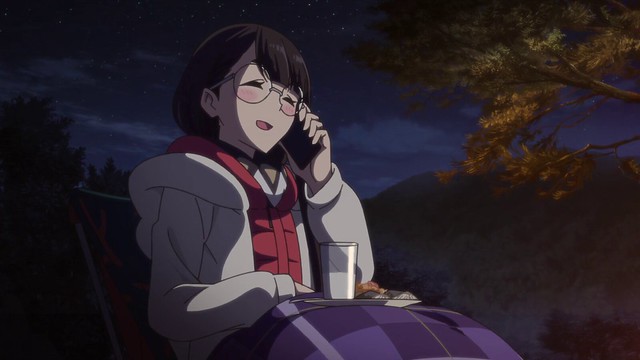 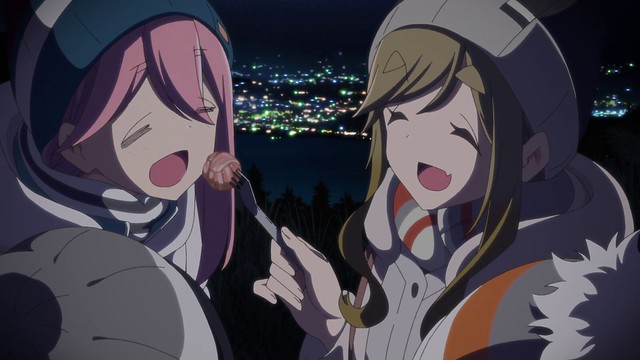 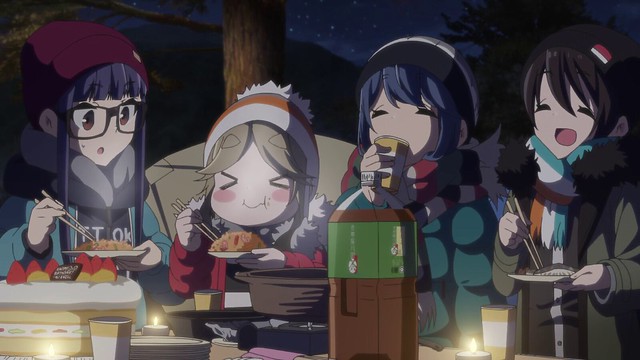 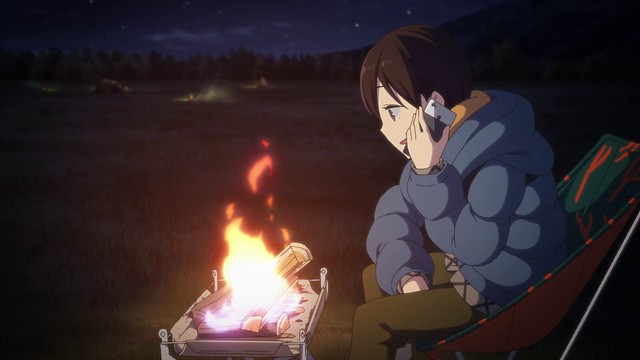 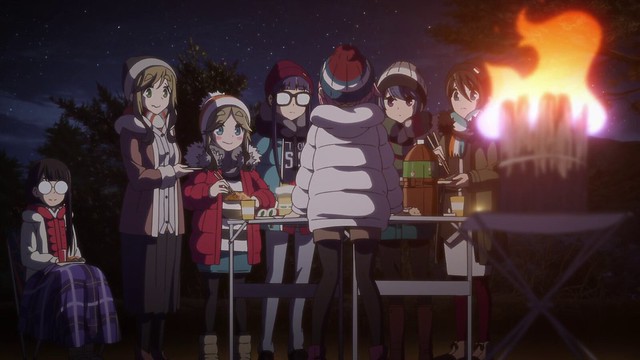 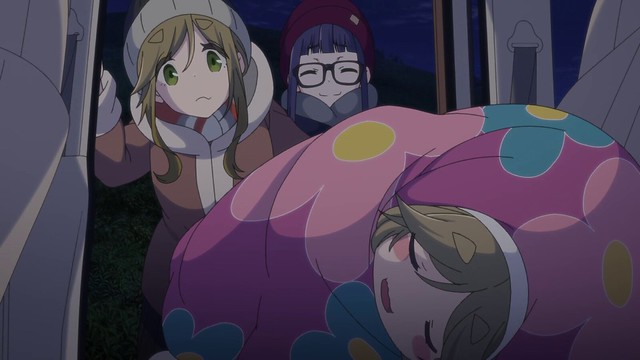 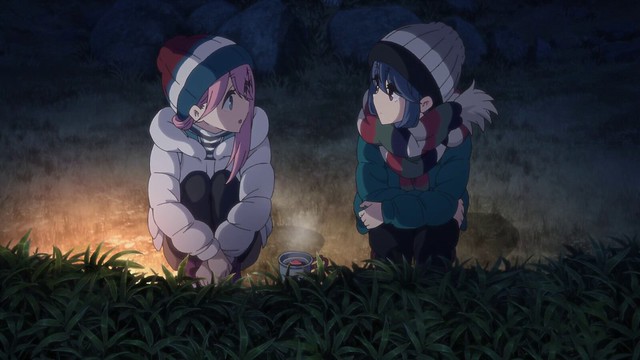 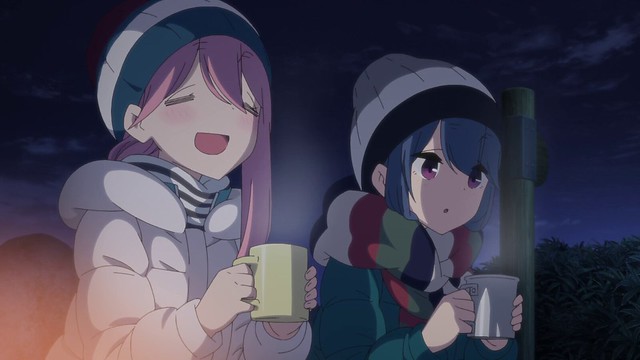 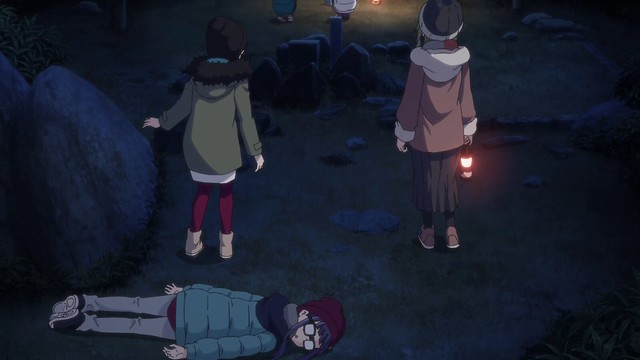 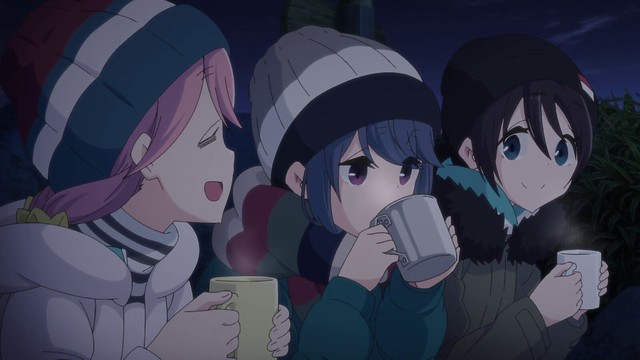 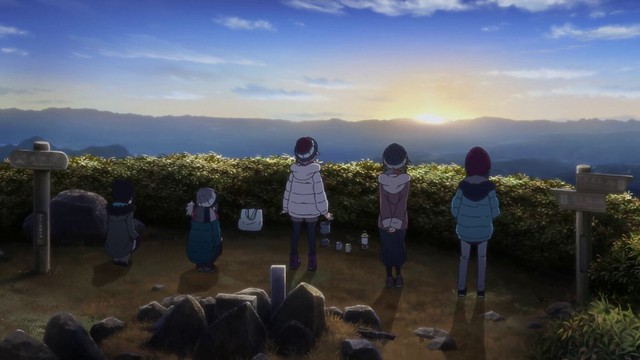 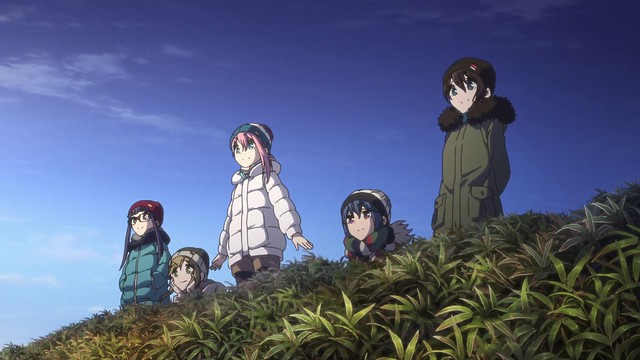 With the revelation that Yuru Camp△ 2 will have one more episode to wrap things up, I am immensely grateful that C-Station has made the decision to space things out and properly portray Rin and the Outdoor Activities Club’s biggest and grandest camping trip yet. An extra twenty minutes will allow for the remainder of the girls’ itinerary to be visited (it would be completely unfair to shaft Akari and not visit the capybaras when she’d been so excited to check them out all this time), and also wrap up all of the themes that Yuru Camp△ 2 strove to cover during its second season. I have never been left disappointed by a studio’s decision to extend a series: Sunrise had previously extended Gundam Unicorn and Gundam Origin to fully tell their stories, and the wait was well worth it. With this as the precedence, I have no doubt in my mind that Yuru Camp△ 2‘s finale will be an immensely satisfying conclusion to what has become one of the most widely-acclaimed slice-of-life anime around. With this in mind, however, next week, I will not be returning on Thursday to wrap things up. Two weeks ago, my search for a new iOS developer position drew to a close after five weeks of searching, and I was most fortunate to be extended an offer with a local software firm. This represents a new start for me; I am very excited to onboard and begin contributing to things. I officially start this new position on April 1, which is when Yuru Camp△ 2‘s finale is airing. In order to ensure a smooth transition and onboarding, I will be coming to the office next Thursday to meet the team and get set up. Consequently, I am moving my Yuru Camp△ 2 finale review to Friday, which is also Good Friday. Readers have my word that I will be wrapping up this series; my decision is made based on my intention to ensure I start my new position strong, as well as write the best possible Yuru Camp△ 2 finale talk that I can to wrap up yet another brilliant slice-of-life series.