“We could all do with a few laughs. I’ve got a feeling we’re going to need them more than usual before long.” –Harry Potter, Harry Potter and the Goblet of Fire

Hikari reluctantly agrees to ice swimming with Nikka and the others, but subsequently develops a cold from the temperature extremities, becoming bed-ridden while she recovers. Hikari later accompanies Edytha on a trip to pick up supplies, but the group get arrested for attempted to purchase alcohol as minors, and Gundula’s efforts to get them out of trouble fail. Meanwhile, Gertrude’s efforts in filming appear to show some results: after Charlotte and Francesca tag along, the group also manages to convince Sanya to appear in the movie – they suggest that Sanya might be able to find her parents more readily if she appears in a film and spreads the word. Charlotte and Francesca’s antics do create a compelling movie, although Eila begins falling ill in Sanya’s absence. Eila arrives in St. Trond just as Minna manages to convince the higher-ups to re-establish the 501st. They celebrate their reunion with a party – fearing Minna’s deadly cooking, Charlotte, Erica and Francesca whip up a wonderful range of party foods for everyone. However, a Neuroi arrives, forcing the girls to drop everything and sortie. Back in St. Petersburg, the 502nd prepare for Takami’s arrival: after Yoshika gives her a clean bill of health, she flies back out, eager to reunite with Hikari. Naoe is unable to hide her excitement and embarasses herself in front of the other Witches. Hikari is overjoyed to see Takami again, and the two promise to take to the skies and defend what’s dear to them. This is World Witches: Take Off!, a continuation to 2019’s 501st Joint Fighter Wing: Take Off! series. Continuing on in its predecessor’s footsteps, World Witches: Take Off! retains a joyful spirit and provides plenty of laughs. However, unlike 501st Joint Fighter Wing: Take Off!, World Witches: Take Off! is split down the middle and follows two separate, overarching stories – one of the 501st putting a movie together in a bid to reunite and reactivate their group, and the other of the 502nd’s time spent getting Hikari up to speed on everything. World Witches: Take Off! thus ends up being quite serviceable in terms of its story, standing in sharp contrast with 501st Joint Fighter Wing: Take Off!, which had no story, and where episodes consisted of standalone gags. Despite having two separate stories running concurrently, however, World Witches: Take Off! nonetheless manages to retain its predecessor’s humour.

On paper, World Witches: Take Off! is a straight upgrade to the style seen in 501st Joint Fighter Wing: Take Off!, but in practise, the series is stymied by the fact that despite being about the World Witches, there is no actual encounter between the 501st and 502nd. The disappointment here stems from the fact that the opening sequence shows all of the Witches together, and it does not take much imagination to suppose what would happen had both the 501st and 502nd met one another. Such a large group of varied Witches would create opportunity for new jokes and new experiences that have hitherto been unseen in the Strike Witches universe as the different characters bounce off one another: Charlotte could fall victim to Waltrude, while both Gertrude and Naoe might go after Erica for her sloppiness. Hikari and Yoshika would get along very well with one another, while Eila would continue to be troubled by Nikka. The skies here are the limit for what is possible, and Strike Witches had always shown the importance of the moments the Witches spend together off the battlefield, so it was certainly conceivable that World Witches: Take Off! could’ve dared to go big and show something that had never been seen before. This was the impression that World Witches: Take Off! seemed to give off with its opening sequence, so I had been anticipating a meet-up between the 501st and 502nd. This was never realised – the closest it gets is when Yoshika clears Takami to return to Europe. Otherwise, it’s two separate stories in which the characters never do meet one another, and this was a shame, because it would’ve marked the first time the Witches have a chance to meet. I appreciate that the writers might’ve deliberately avoided this route because to do so would also be to introduce chaos into the Strike Witches universe of a sort that we’ve not seen before, and moreover, the series proper seems to keep the different groups apart, so this decision might also be to respect the writers’ choices. 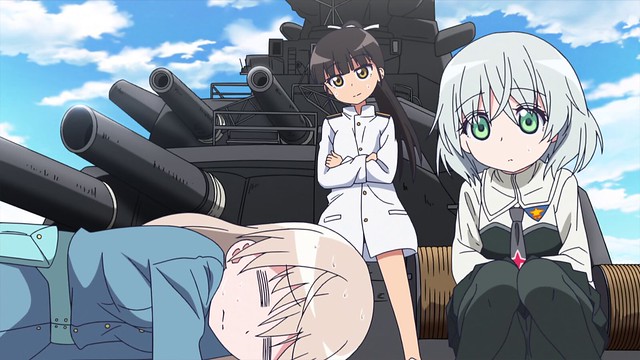 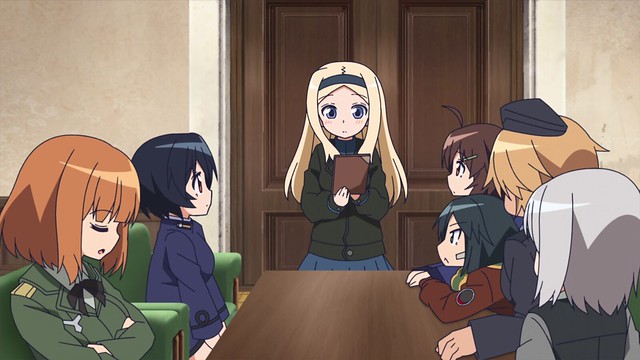 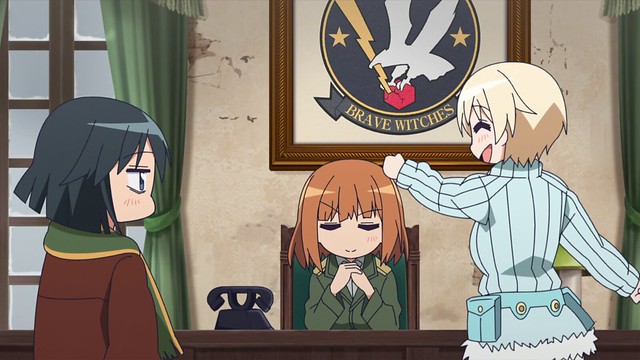 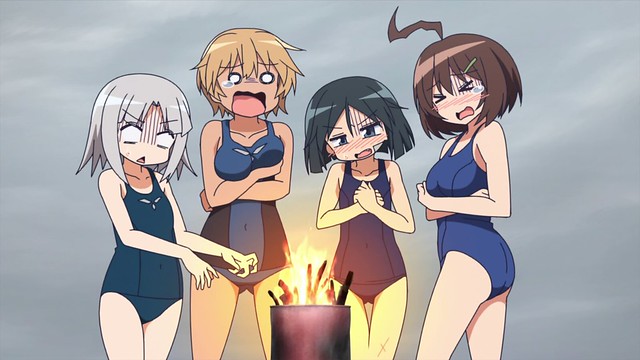 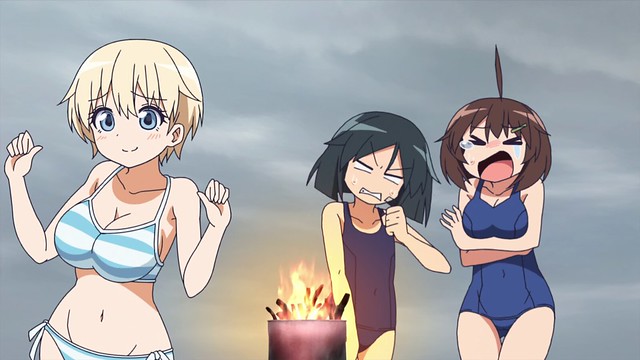 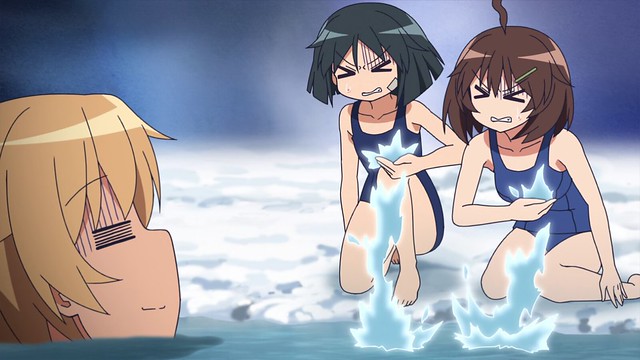 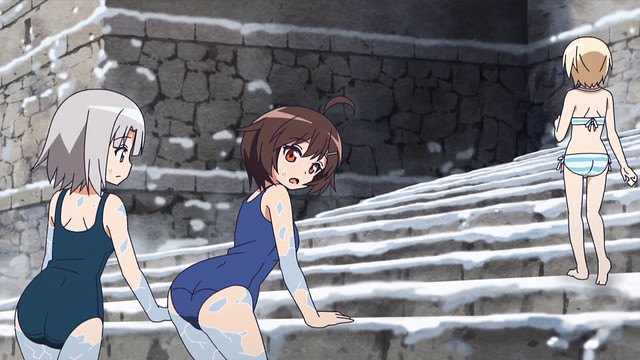 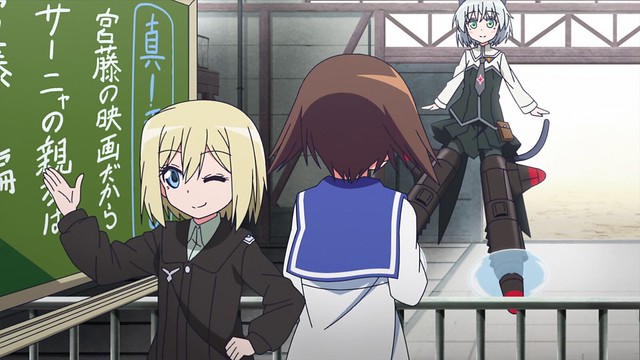 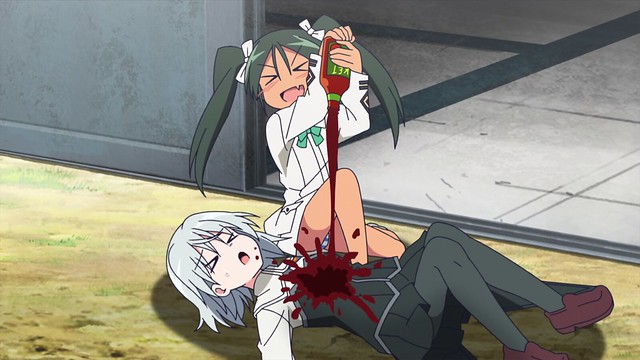 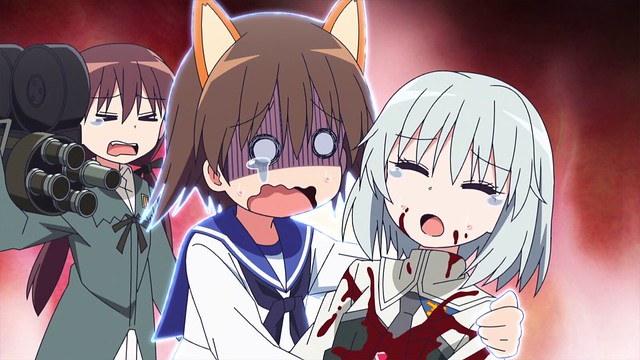 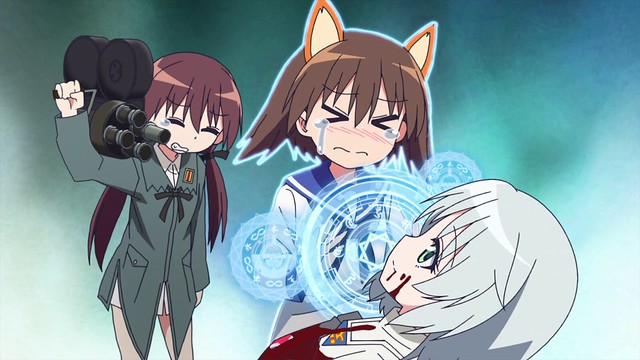 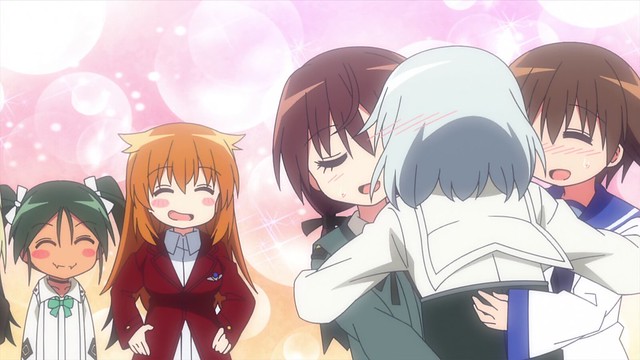 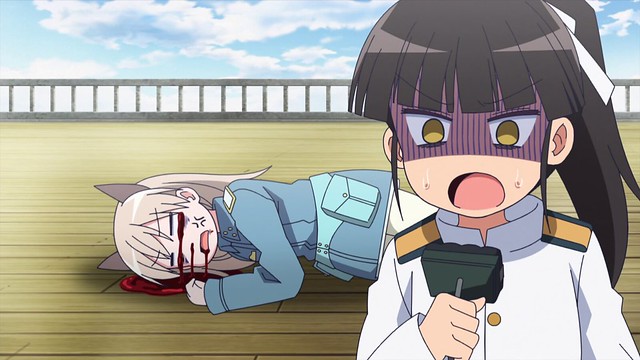 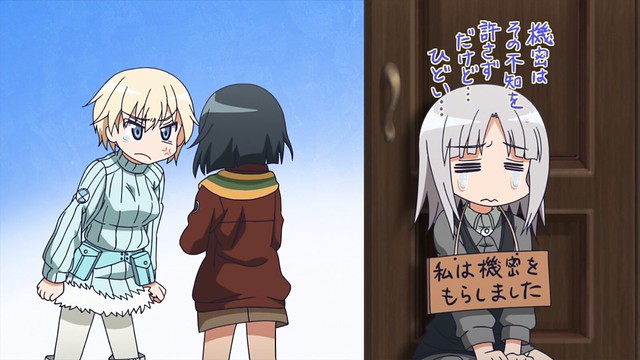 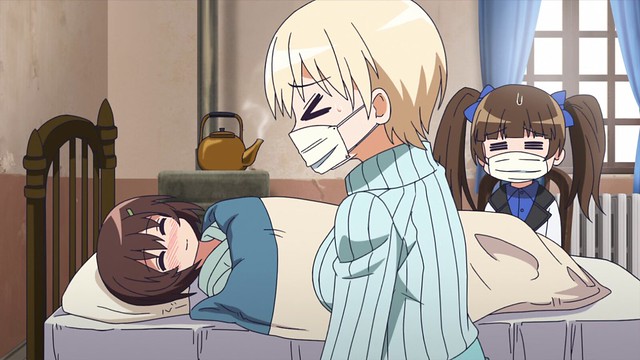 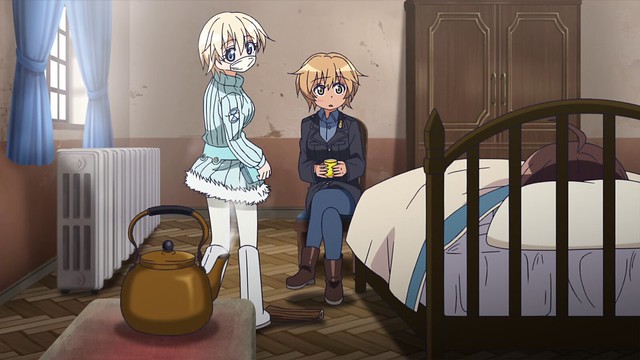 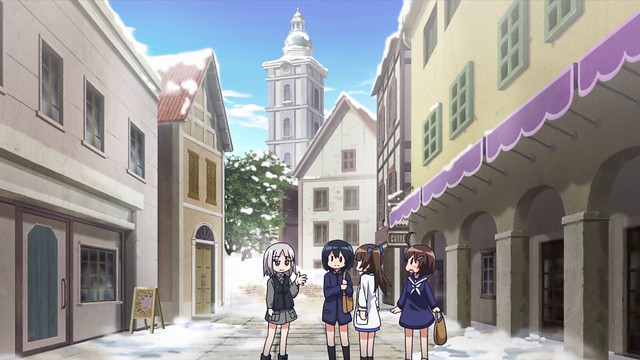 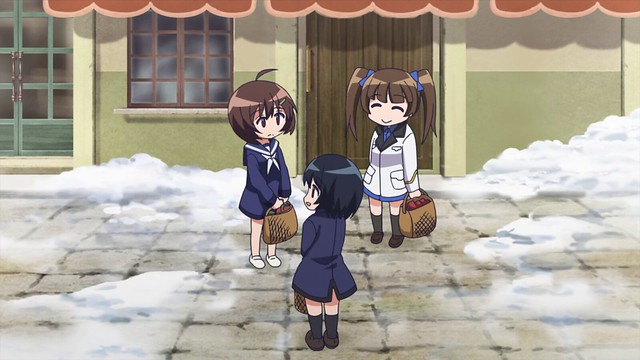 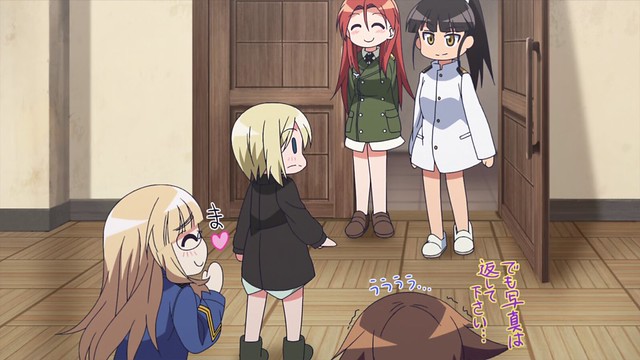 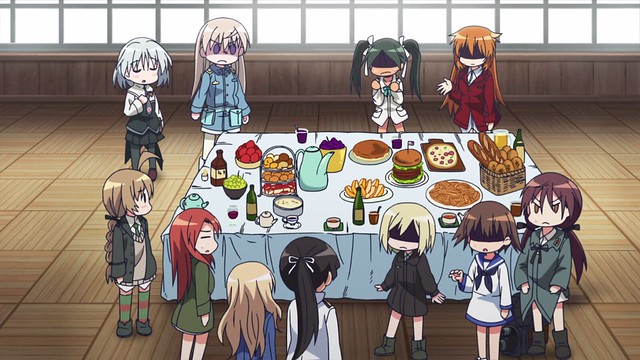 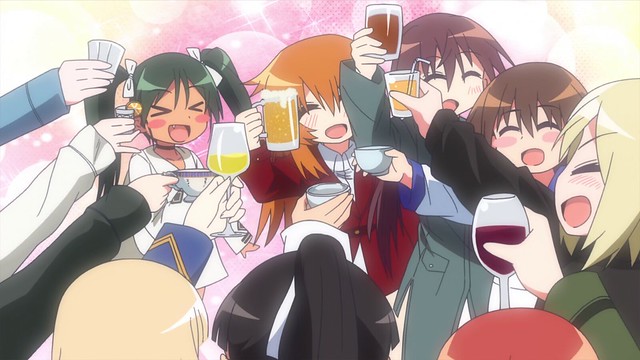 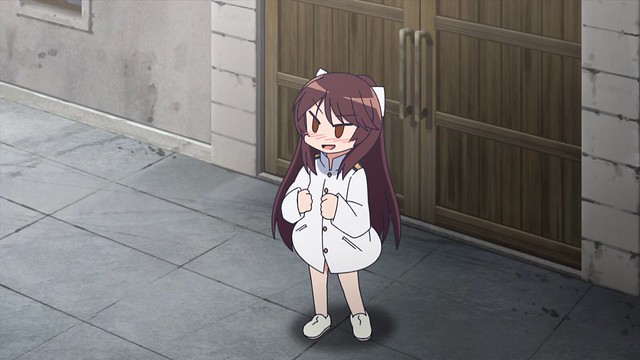 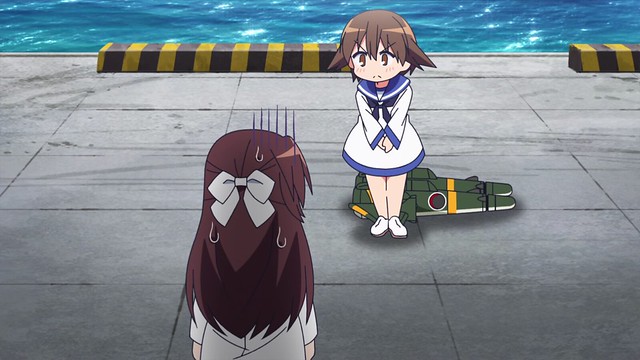 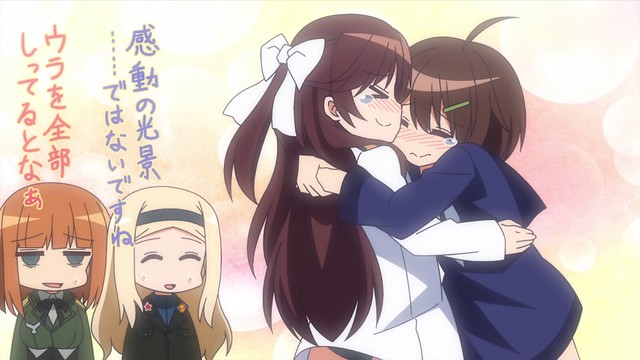 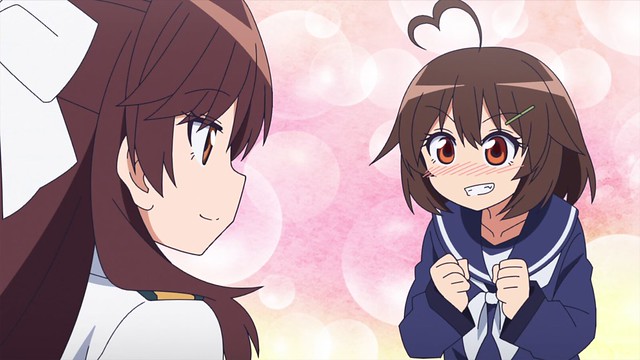 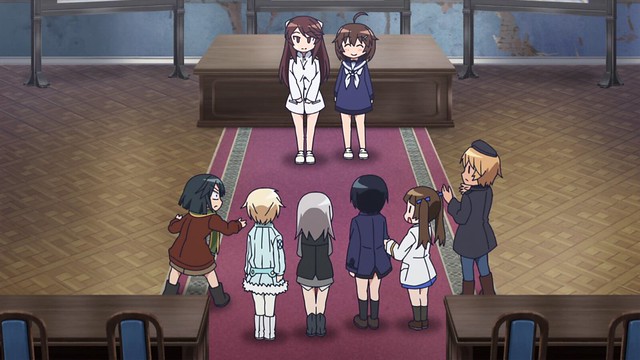 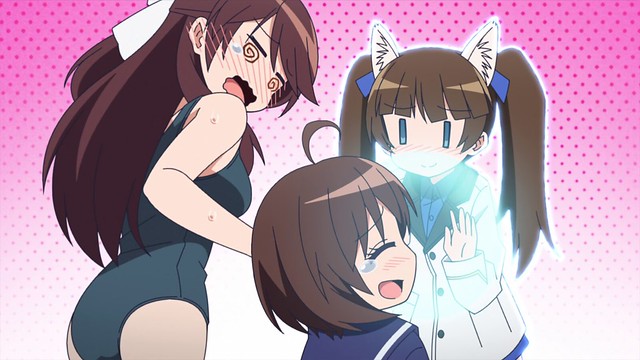 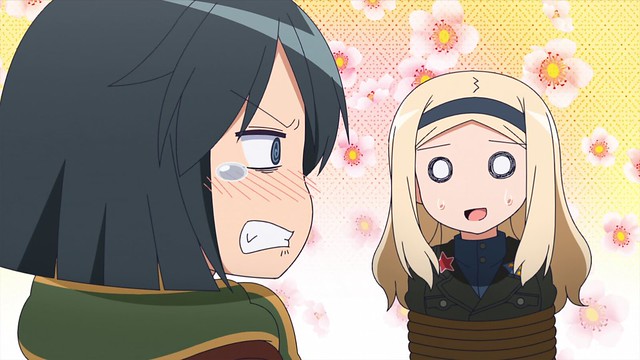 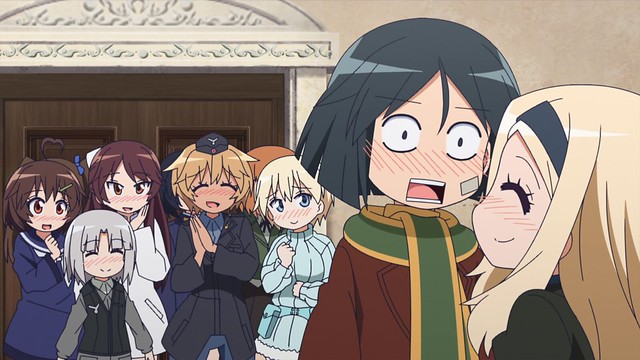 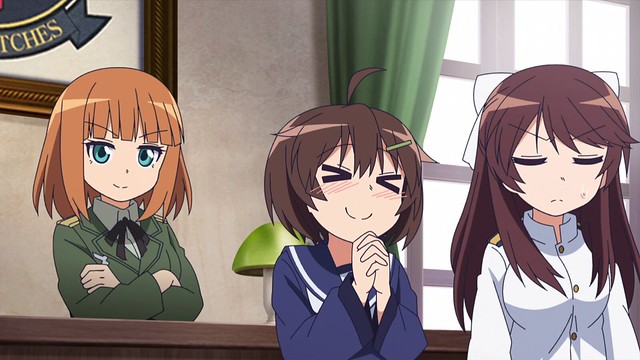 Altogether, World Witches: Take Off! is a fun series – while it does not bring anything particularly new to the table, nor does it help build the Strike Witches world further, World Witches: Take Off! continues on as its predecessor did, introducing a considerable amount of humour into the Strike Witches universe and acting as a parody of what’s happened. With this in mind, I’ve recently heard folks complain that “fun” is not a valid metric for assessing one’s enjoyment of entertainment on the basis that it’s too subjective a measure. I find this a narrow-minded way of thinking: World Witches: Take Off!, for instance, creates humour in its story that accentuates the worst traits in each character, and in the knowledge of the contrast the Take Off! series’ characters have with their usual counterparts, the dichotomy creates irony that is hard to reconcile, and hence, funny. This is where the enjoyment comes from, and for the lack of a better word, World Witches: Take Off! is a fun series, even if it doesn’t do anything world-changing or novel. The format continues to work for this series of shorts, acting as a pleasant intermediary series between now and when Luminous Witches is set to air. Ever since it was known that Strike Witches would be returning after VividRed Operation, the series has indeed returned in a big way. This is not unwelcome, since I’ve come to greatly love the Strike Witches universe and its characters: the greatest joys have always been seeing what sorts of scenarios unfold with the characters, and Luminous Witches intends to take viewers to a different side of this world. I’m rather excited to see what’s coming, and while series like World Witches: Take Off! might not necessarily advance Strike Witches as a whole, the fact we’re getting anything at all is a great sign that there’s more to come.