Having now finished the original two Left 4 Dead campaigns, the only thing that was Cold Stream and The Last Stand, two community missions that rounded out the game. Cold Stream sees the Left 4 Dead 2 survivors fighting through a forest in the mountains to reach a helicopter to evacuate them before a forest fire catches up with them, while The Last Stand represents an alternate interpretation of what had happened in Death Toll had the survivors gone a different route. After abandoning their truck at a roadblock, the survivors make their way into a junkyard and eventually reach a lighthouse. Here, the survivors signal for rescue from a boat, fending off hordes of Infected while awaiting the boat. These community missions are quite unrelated to the stories portrayed in the regular campaigns, providing players with a remote forest setting to explore. At this point in time, the mechanics and objectives were simple enough: having beaten the last two campaigns (and fighting with the community workshop directory, which had been giving me some trouble with the character name plates), getting back into Left 4 Dead 2 to finish off the single player experience was not particularly tricky, and I ended up wrapping up both of the community campaigns with time to spare. As noted in my previous posts, the K-On! mod for Left 4 Dead 2 had been remarkably entertaining, completely altering the aesthetic and mood in Left 4 Dead 2. However, this time around, I’ve decided to further increase the mods introduced into the game: as amusing as it had been to run Left 4 Dead 2 with Houkago Tea Time characters, even new models and sound files can get old to write about. As such, I decided to introduce an additional set of mods into the game which would modify the experience somewhat without conflicting with the K-On! mods.

This mod takes the form of Halo weapon skins to replace the original weapons. While the weapons still function identically to their original forms, the weapons look and sound different. The end result is simple: I am now running with the automatics, pistols, shotguns and long-range rifles from Halo, rather than more familiar weapons. In addition to a new, highly-detailed skin, the Halo weapons also have new firing sounds. Altogether, these new weapons feel considerably more powerful and reliable than any of the classic weapons. Every shot fired feels powerful. The base pistols and Tier 1 weapons, which had felt diminished in power compared to the Tier 2 weapons in their original form, suddenly gave the impression of being viable, lethal tools that could hold their own against the hordes of Infected. The suppressed MAC-10 felt inadequate against special infected, but when replaced with the M7/C submachine gun, players suddenly appear to have a better fighting chance. The hunting rifle is replaced by the DMR, firing rounds with a slow but reliable outcome. The Tier 2 weapons themselves feel even more effective, and when the mods are properly applied, even the introductory pistol becomes a more entertaining weapon to use. I’d first heard about the Halo weapon mods from a friend who’d been interested in asking about why the modders had removed a particularly unique skin from the marketplace. I’d speculated it might’ve simply been because the mod needed more work and suggested said friend get in touch with the modders to inquire about it. After checking out the modders’ workshop, I became intrigued, and subsequently resolved to try the weapons out for myself. The end result was highly entertaining, and after ensuring that the new mods did not conflict with or modify the way my previous mods worked, I set about finishing off Left 4 Dead 2‘s remaining missions. 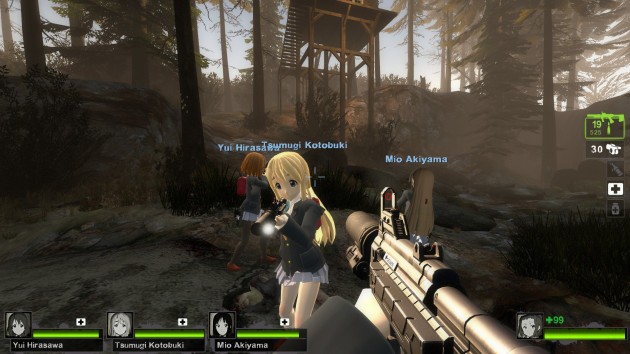 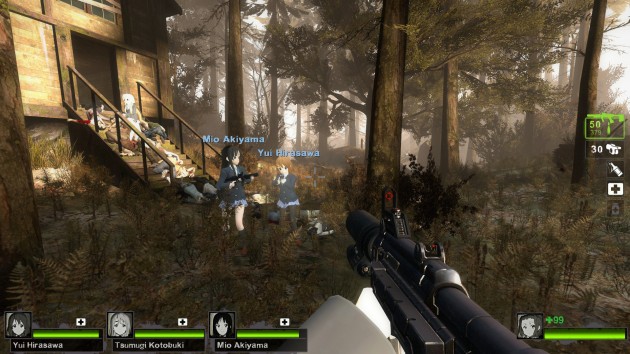 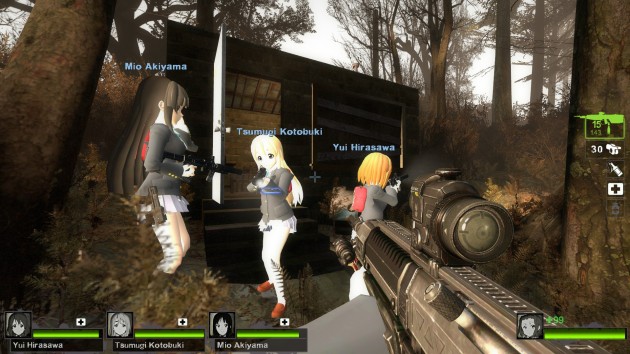 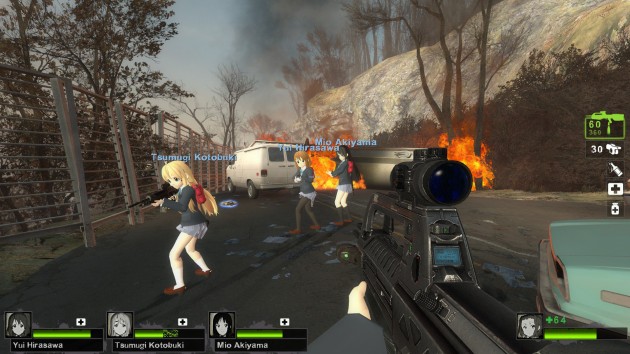 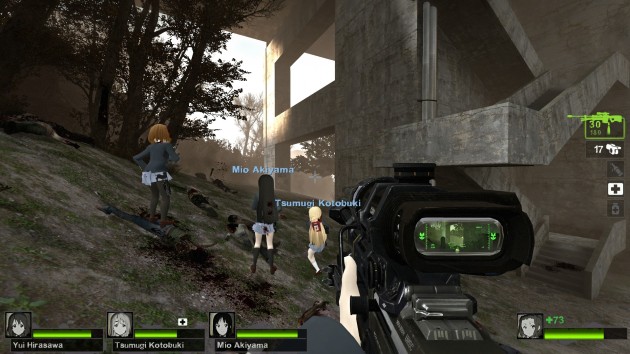 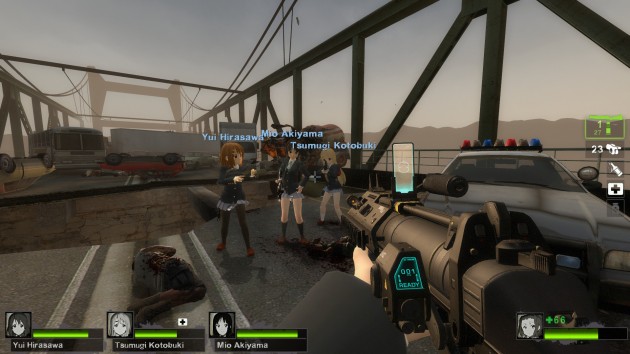 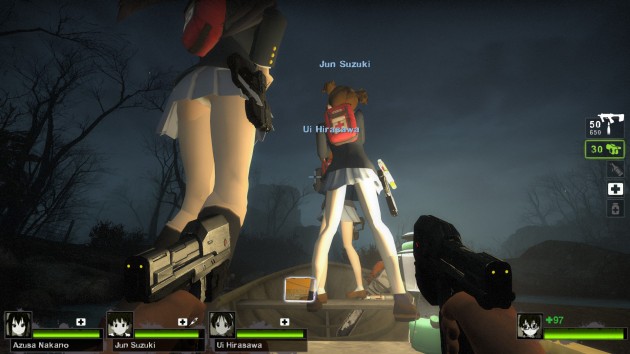 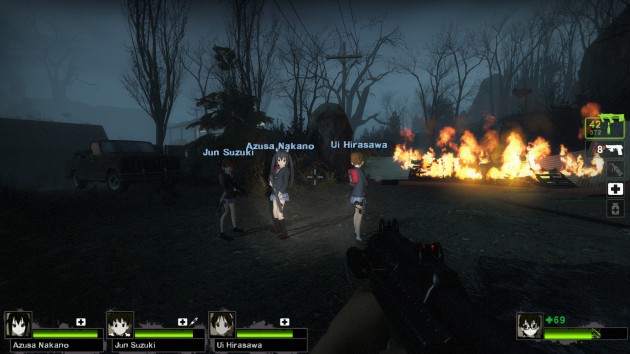 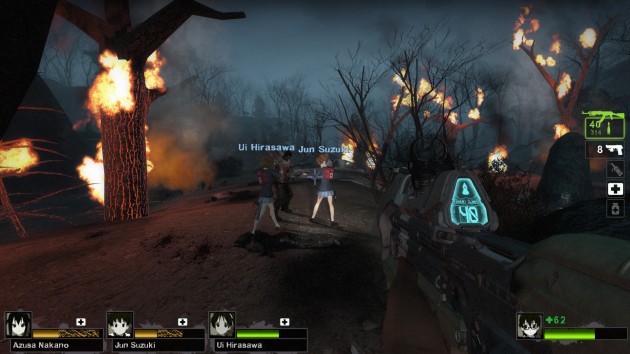 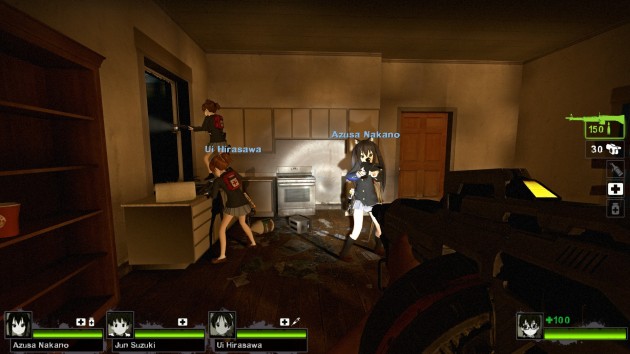 While Left 4 Dead 2 is very much a squad-based game that is best played with friends, mods like K-On! and Halo weapons transform the way the game feels, while simultaneously leaving the central mechanics intact. This seemingly minor set of changes alters enough of the look and feel such that Left 4 Dead 2 appears as a completely different game. Admittedly, the base Left 4 Dead 2 never really appealed to me in terms of its aesthetic, and I’d only picked it up because the sale price was excellent: my friend is very big on Valve games for their ease-of-modding, and I imagined that we’d spend more time messing around as a two-person team once I’d picked the game up. While we did spend a few fun-filled hours blasting zombies, the base game never really excited me to the same extent as I imagined. However, with things like the K-On! mod, Left 4 Dead 2 became considerably more entertaining, to the point where I can say with confidence that it would be worth buying Left 4 Dead 2 solely for the K-On! mod alone. At that point, the variety of mods available in the Workshop means that, were one so inclined, they could completely transform the way Left 4 Dead 2 handles: particularly well-done and extensive mods allow players to replace the existing Infected with Halo‘s Flood, and similarly, the very same techniques for using K-On! characters as character models allow for one to run with Spartans. Such mods even provide a means of changing up the HUD to closely resemble the Mjolnir armour system, customised for Left 4 Dead 2‘s inventory system. There is no ceiling on what is possible with the mods in Left 4 Dead 2, and while Valve currently has no plans for a continuation, the ability to change the experience via mods has meant that Left 4 Dead 2 has proven unexpectedly fun: what had initially been little more than a curiosity became a full-fledged, meaningful experience that was well worth the price of admissions. Thanks to mods, I’ve now finally completed Left 4 Dead 2‘s single-player experience in full, and while my friend and I are unlikely to co-op in Left 4 Dead 2 with any frequency owing to our schedule, knowing that I’ll be able to retain a highly customised setup should we take this up means that I’d be happy to co-op if the opportunity presents itself in the future.

4 responses to “Yui Needs A Weapon: Revisiting the K-On! Mod for Left 4 Dead 2 with Halo Weapons”