Super Cub: Review and Reflection At The Halfway Point

Koguma accepts a courier job that sees her ferrying documents between her high school and another school in Kofu. She takes her bike in for maintanence, and later purchases a rain coat to keep dry during the wet Yamanashi summers. Later, Reiko invites Koguma over to check out her place, and Reiko shares with Koguma her summer: it turns out that Reiko had taken up a job surveying road work up the slopes of Mount Fuji, and, inspired by the fact that other Cubs had made the journey, attempts to do the same. The tough mountain trails end up destroying her bike, but undeterred, Reiko intends to buy a new bike. In the meantime, she suggests that Koguma go for her full motorcycle license and helps her to upgrade the Super Cub’s engine. When a school trip comes, Koguma is excited to attend, but develops a fever on the morning of the trip. She recovers and decides to catch up to her classmates, stopping at Mount Fuji’s fifth station along the way, and although she receives a reprimand for doing so, nonetheless is allowed to join the class. After sharing her day’s adventures with Reiko, Koguma and Reiko unwind for the evening, and the next morning, sneak off to ride together. Reiko remarks on how venerable Super Cubs are, and Koguma wishes that she could live in this moment forever with her Super Cub, hoping nothing will change. Here at Super Cub‘s halfway point, Koguma’s world begins to expand as she becomes more familiar with her bike. At its halfway point, Super Cub continues on with its gentle pacing, portraying Koguma’s experiences with great detail and finesse to convey to viewers how Koguma feels with every setback and its attendent discovery. This in turn really allows viewers to feel like they’re there with Koguma, rooting for her every step of the world and bringing her joys to life.

As she encounters new challenges and deals with them in turn, Koguma becomes more resilient, more capable of dealing with unexpected adversity. However, Super Cub warns viewers that Koguma is not to be complacent: while Reiko mentions that the world opens up with a bike, there are also some mountains that cannot be conquered, not without skill, experience, determination and the hardware to do so. While Koguma spends her summer delivering letters between two schools and gradually growing comfortable with her bike, Reiko had foolhardedly attempted to see how far she could take her bike. Unsurprisingly, the rough terrain and Reiko’s inexperience results in her bike being totalled, rendered inoperational. The sharp contrast between Koguma and Reiko’s summers is meant to show that even the means for conferring freedom and liberty have their limits. Some things simply can’t be conquered at one’s current level, and this particular barrier is only overcome with patience and the resolve to work out solutions. Koguma, demonstrates to viewers that she’s certainly aware of her limits, and while she’s much more open-minded, to the point where she creates new memories of her own when she decides to use her bike to catch up with her classmates’ outing, she also knows not to scale Mount Fuji; instead, she takes pride in being able to start the journey and begin seeing what’s possible. In this way, Super Cub suggests to viewers that a part of exploration means being mindful of what the limits are, and continue to grow and learn within these constraints until there is an appropriate time to step outside of one’s comfort zone and begin something new. 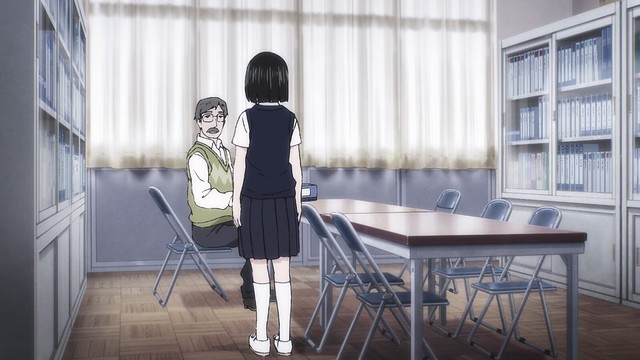 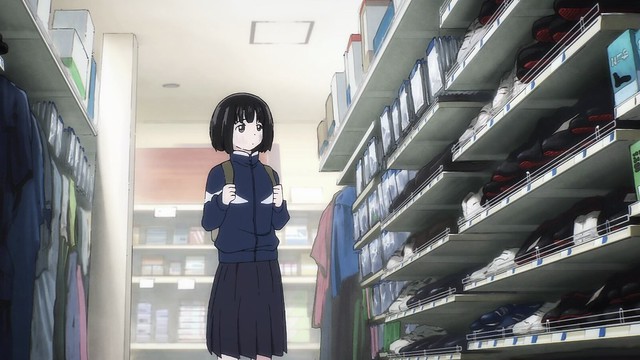 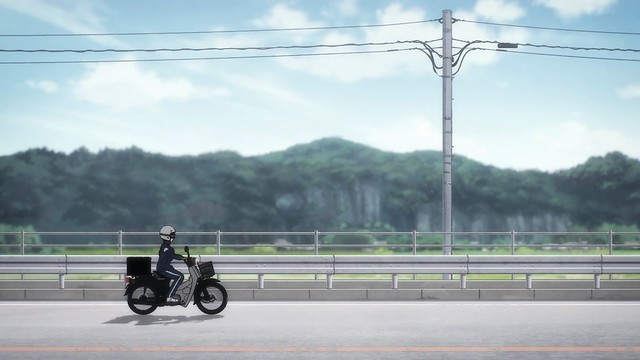 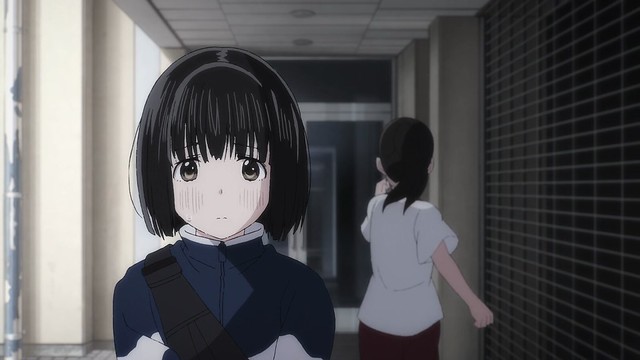 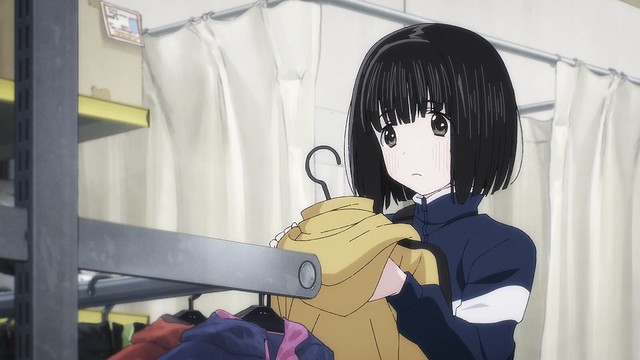 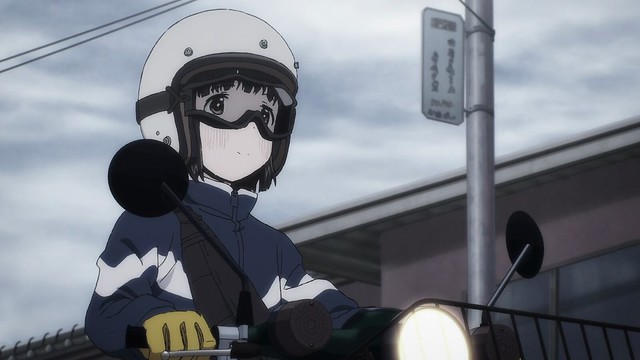 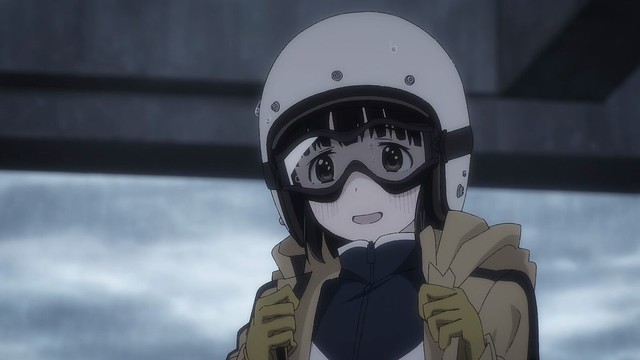 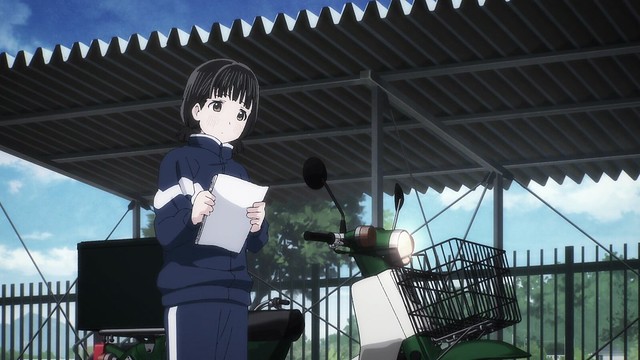 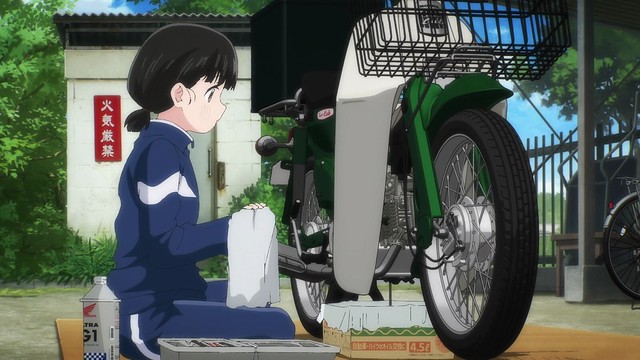 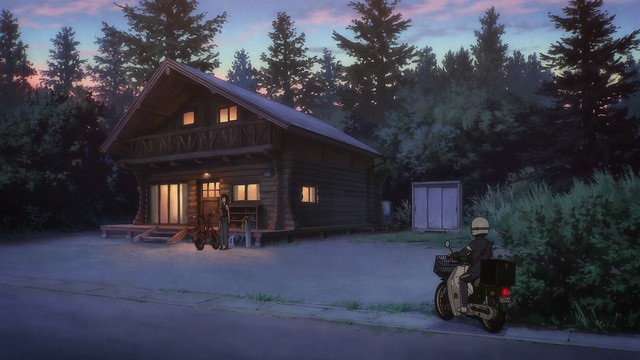 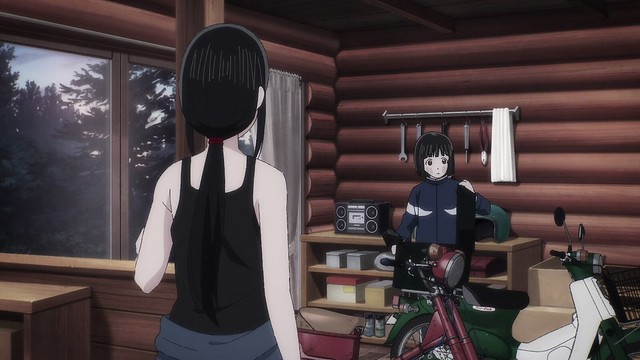 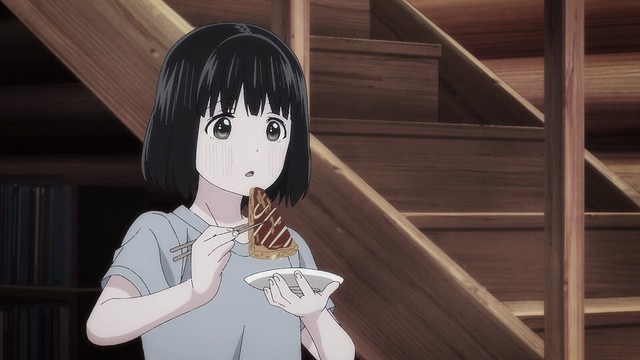 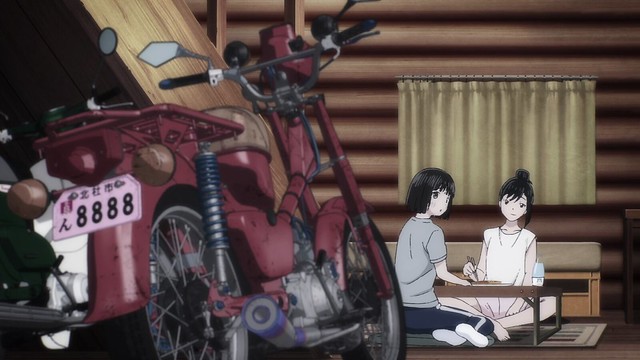 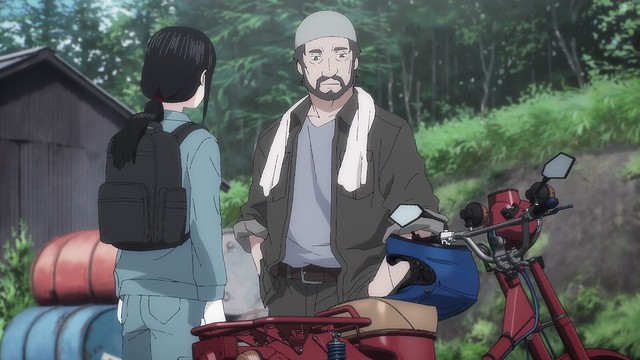 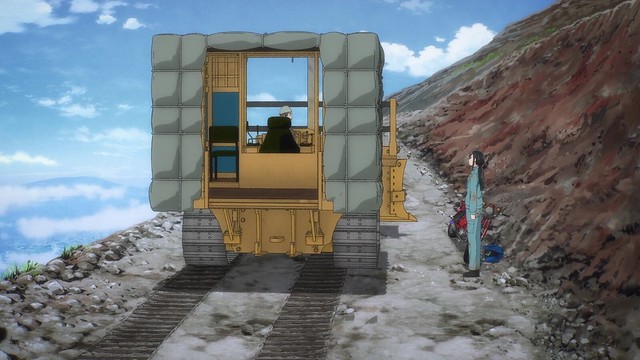 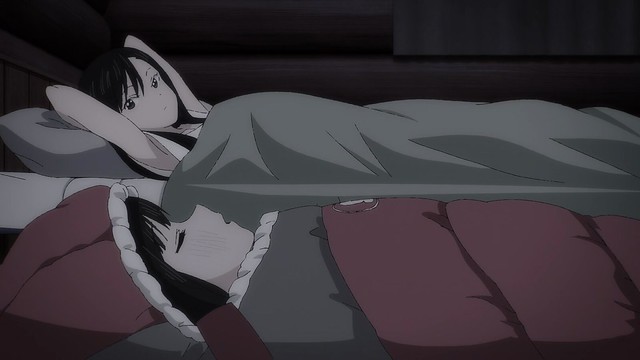 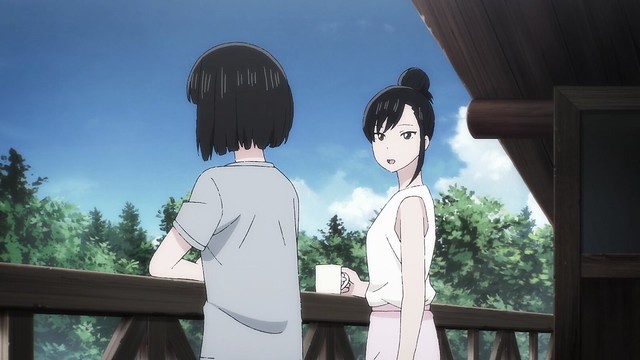 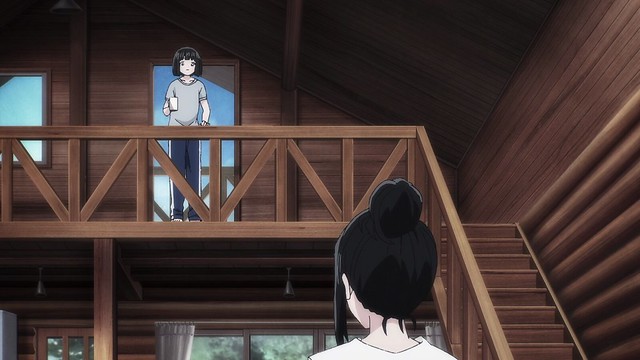 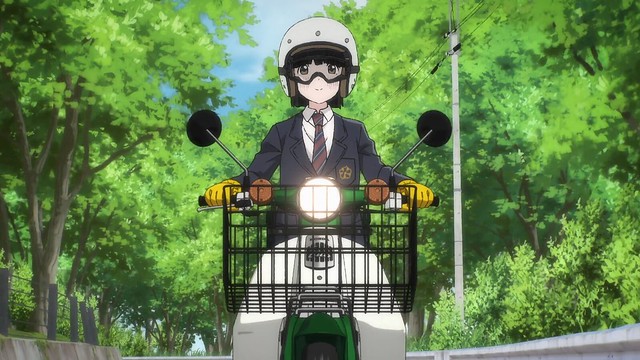 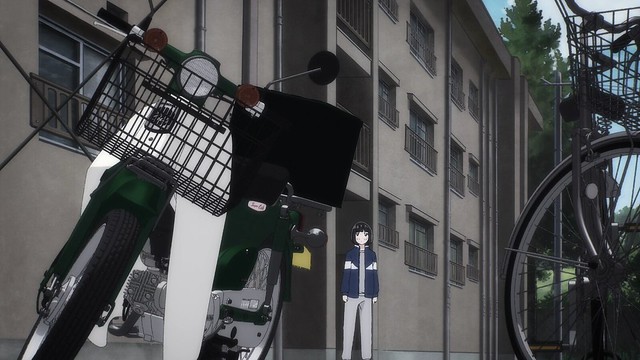 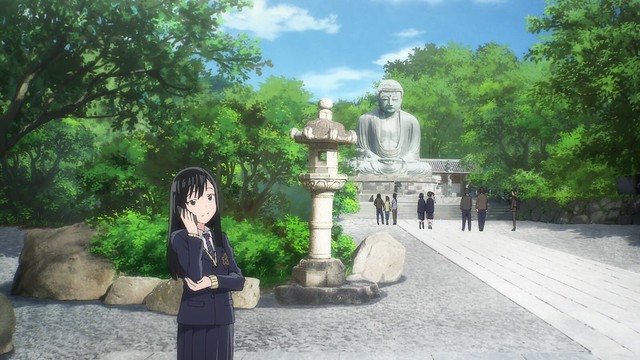 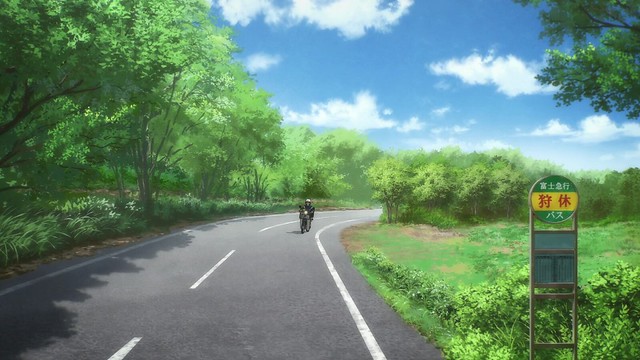 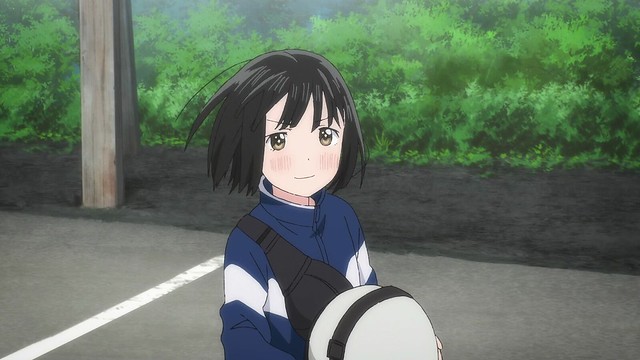 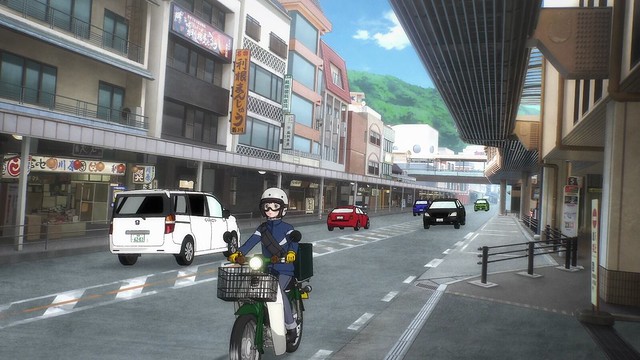 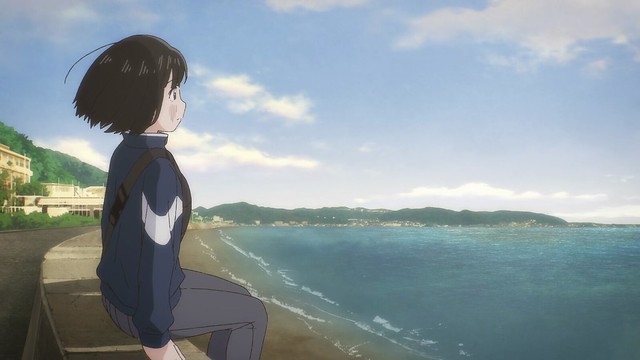 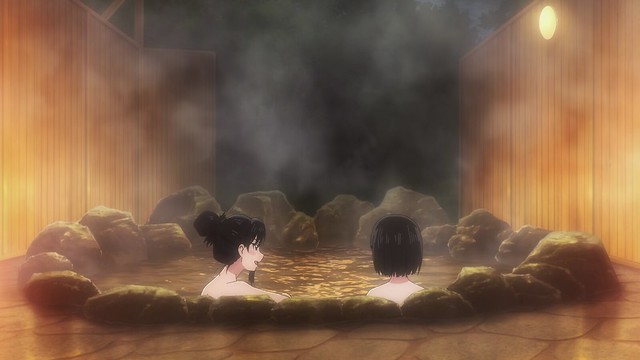 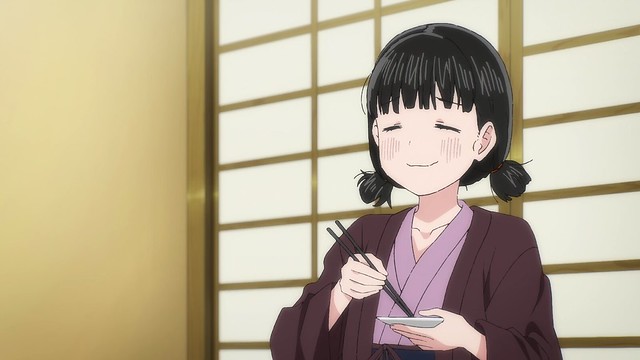 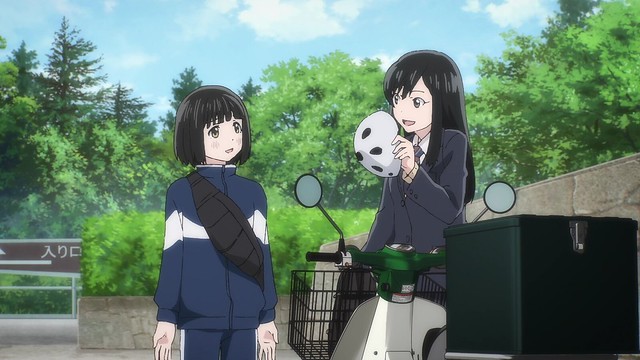 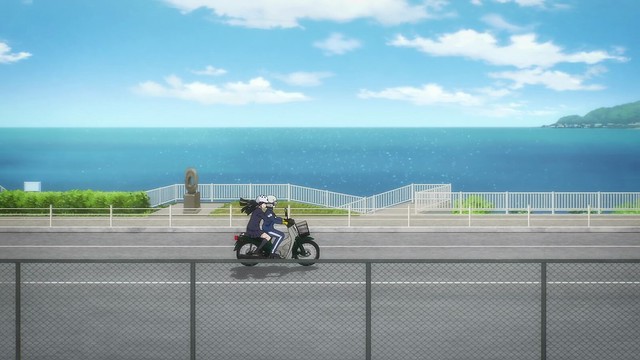 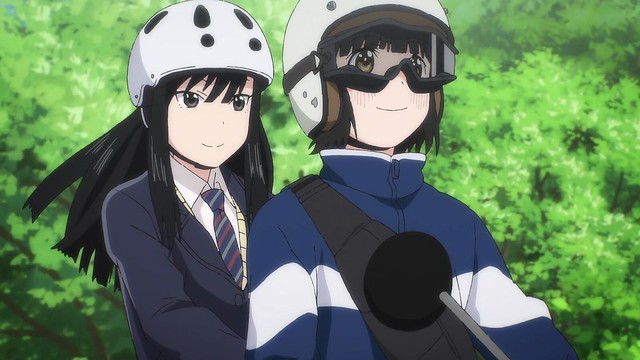 With Super Cub halfway through, one major character still has yet to make an appearance. Reiko now’s become a familiar face in Koguma’s life, offering support and advice where required, and colouring Koguma’s life in a way that wouldn’t be otherwise possible. Slice-of-life anime typically introduce new characters to mix up the dynamic and drive new discoveries: at this point in Super Cub, Reiko’s become a friendly, familiar face to Koguma, acting as a mentor of sorts for Koguma. However, it would be valuable to have Koguma take the initiative and pass on her own experiences with confidence, as well. Such a dynamic would not work with Reiko simply because Reiko’s been biking for much longer than Koguma has: while Koguma mentions she was able to go up the side of Mount Fuji on her Super Cub, Reiko is immediately aware that Koguma’s trip would have been nowhere near as gruelling as her own. Conversely, with a novice, Koguma’s story could become the balance between adventurousness and safety, inspiring a new rider to explore more thoroughly. Super Cub has not disappointed in any area thus far, and it does feel like Koguma could stand to gain additional maturity as she shares her journey with someone besides Reiko. For now, however, Super Cub foreshadows this by having Koguma give Reiko a ride, which is a change in roles as Koguma is the one who’s got the initiative here. Unsurprisingly, I’m looking forwards to seeing what lies ahead for Super Cub: despite its quiet, contemplative mood, Super Cub is captivating and exciting in its own right. Something new lies around every corner, waiting for Koguma to find it, and with her warm smiles at every new discovery, Super Cub gives viewers plenty to look forwards to.

7 responses to “Super Cub: Review and Reflection At The Halfway Point”