While the conclusion of Yuru Camp△ 2 doubtlessly left viewers with a bit of melancholy once it ended, the live action drama has thankfully filled in the void, revisiting the events of Yuru Camp△ 2 in the live-action setting. The second season for Yuru Camp△ 2‘s live action drama was announced in November 2020, and began airing back in April. Before the drama’s new season began airing, however, a special episode was released. This episode summarises events from the first season and portrays Rin’s solo camping adventures in Omaezaki and the coastal regions of Shizuoka, as well as Nadeshiko’s part-time job at the local post office and the Outdoor Activities Club’s New Year sunrise misadventures together. Yuru Camp△‘s drama had been well-received amongst both Japanese and foreign viewers: this series captures the spirit of the anime and brings it to life in a different medium, and speaking to how well both the manga and anime were made, the transition into the real world does not impede Yuru Camp△ in any way. The characters are faithful to their original counterparts in personality and appearance, the real-world settings look even more stunning, and the food is more enticing than what was seen in the anime. The positive reception to Yuru Camp△‘s live action drama is therefore unsurprising, and with the first season as the precedent, it became clear that the drama would be of a similar quality and aesthetic. The announcement of a special episode initially proved unexpected, and early in the live action drama of Yuru Camp△ 2‘s second season, I skipped over this special. I assumed it would be a recap of the first season and so, my journey started when the series proper began airing on Prime. I was therefore surprised to see Rin already in Hamamatsu waiting for Nadeshiko to show up. Evidently, I jumped the gun, and hastened to back up a little, starting the journey properly as Rin embarks on her last solo camping trip of the year while the Outdoor Activities Club have their own fun in trying to catch a pair of New Year sunrises.

Having already covered the themes, symbolism and motifs of Yuru Camp△ 2 ad nauseam in my episodic posts for the anime, there prima facie seems to be little incentive to go back and write about the live action drama again, especially given that the drama follows the anime and manga’s events very closely. However, the different formats mean that the aesthetics between Yuru Camp△ 2‘s anime and live action drama become apparent, altering the look-and-feel of every different scene. Yuru Camp△ 2‘s anime had crafted an infinitely peaceful and relaxing setting, using a gentle colour palette and reduced saturation to ease viewers into every moment, whether it be Rin’s introspective solo camping moments or the rowdy adventures that follow Nadeshiko, Chiaki, Aoi and Ena. In the live action, colours and scenes are sharper, accentuating the mood of each scene. Rin’s calm experiences are ever more relaxing, while the Outdoor Activities Club’s travels become more rambunctious: together with the fact that the drama is presenting the actual scenery and food everyone enjoys, it creates an unparalleled sense of immersion. If the anime had been about conveying a sense of tranquility and a reminder to appreciate the smaller moments, the drama demonstrates to viewers that what Rin, Nadeshiko, Chiaki, Aoi and Ena experience is very much a reality, awaiting the viewer’s decision to go and give things a go for themselves. The dramatically different aesthetic in the drama do not degrade themes and messages from the original anime or manga, and as such, for being able to show viewers what things might really look like were one to follow in Rin and the Outdoor Activities Club’s footsteps while simultaneously being respectful to the original, the Yuru Camp△ drama was very well received amongst viewers. Season two looks no different, and the beginning of a familiar journey from a fresh perspective is off to a solid start. 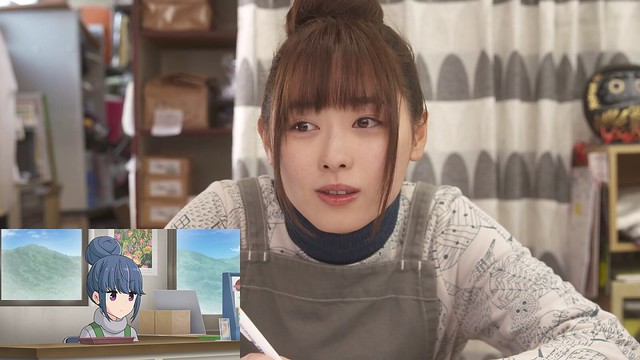 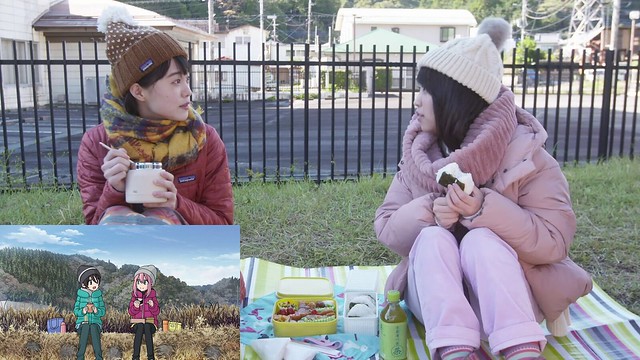 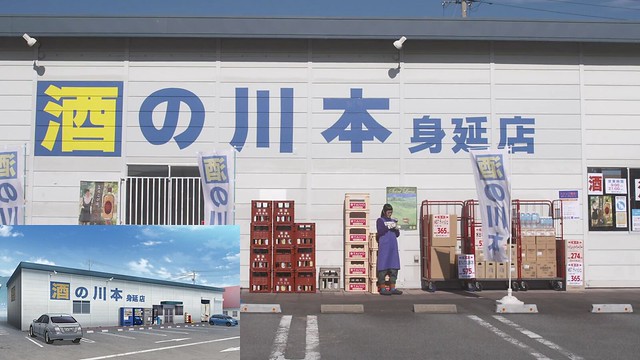 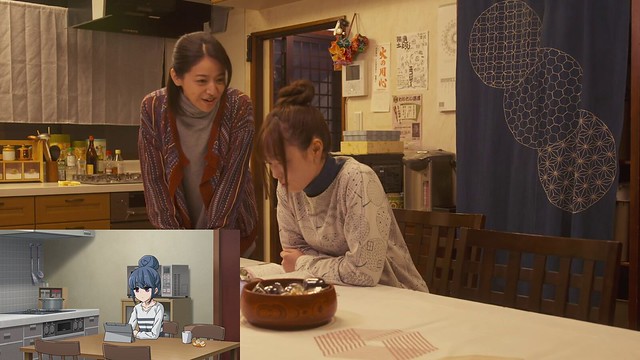 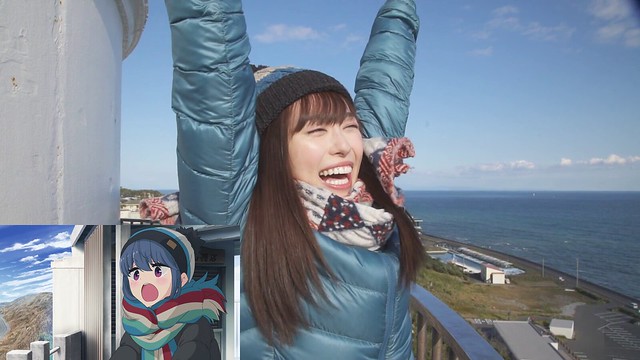 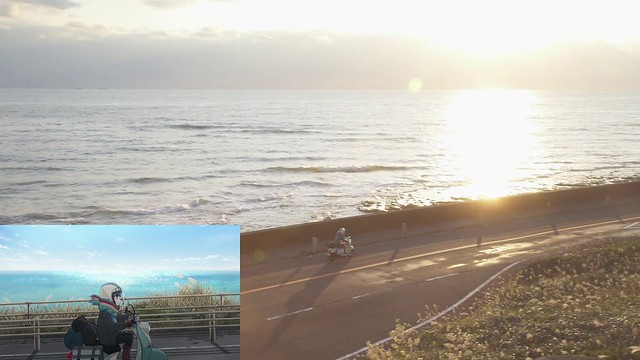 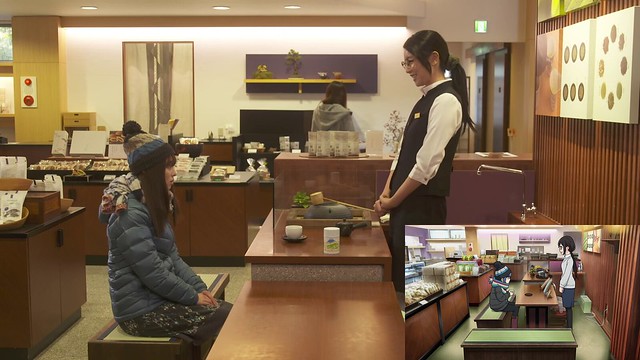 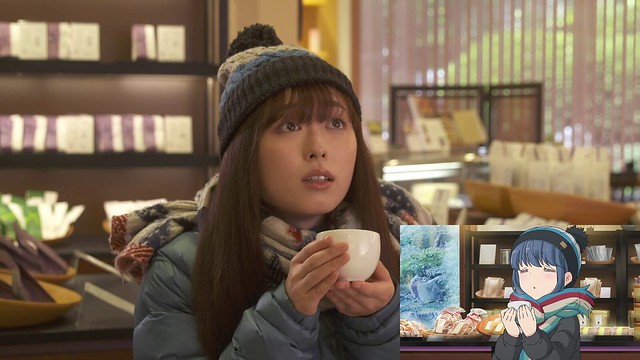 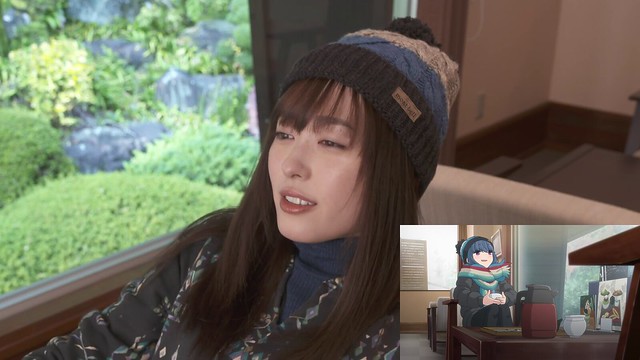 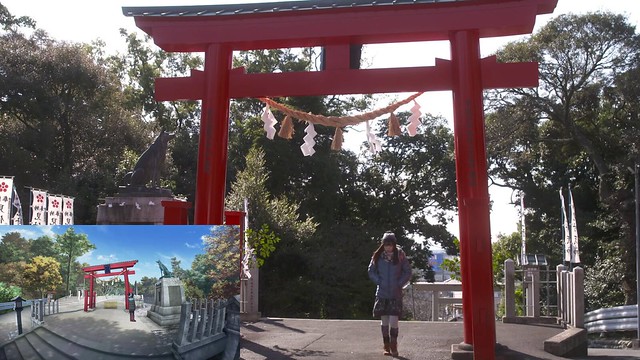 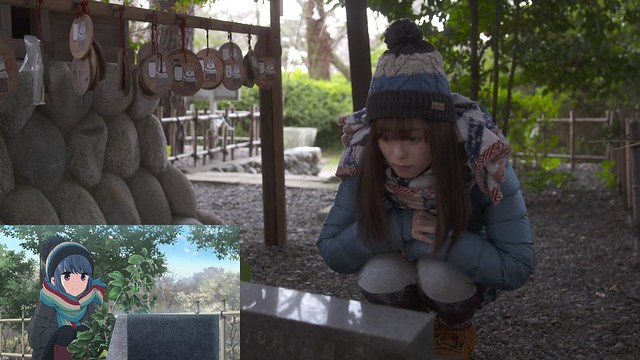 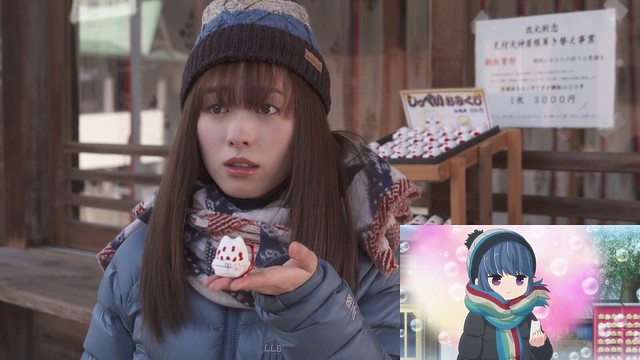 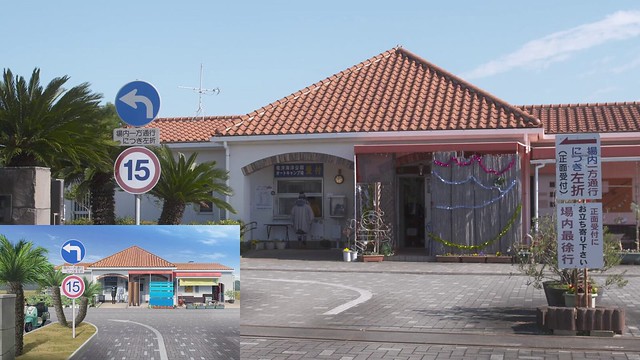 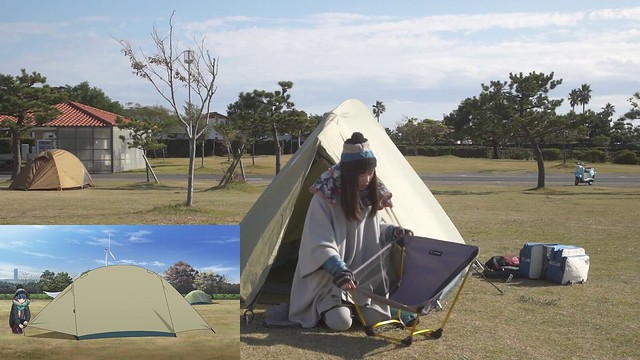 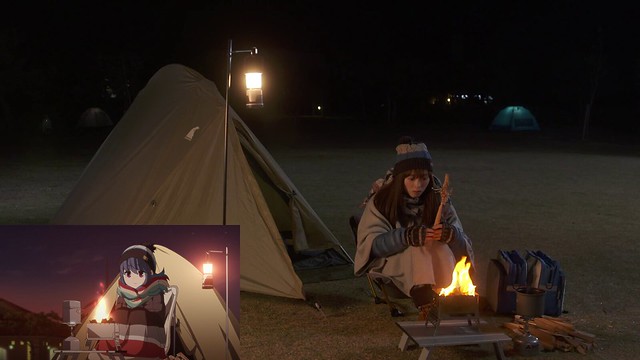 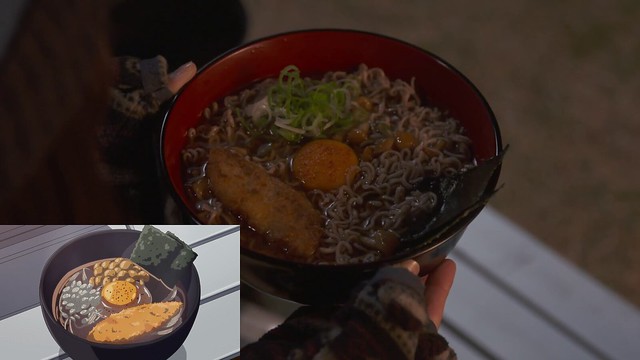 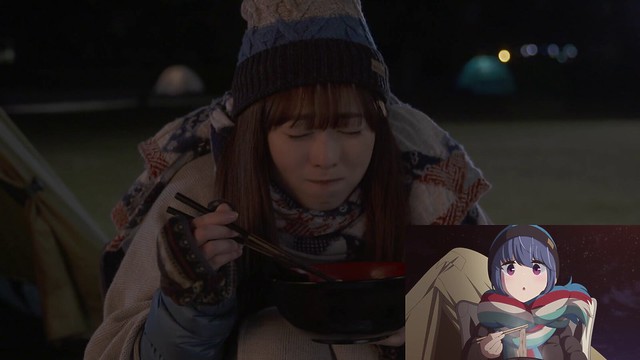 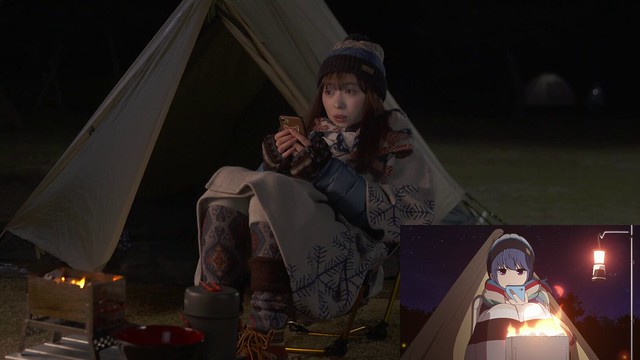 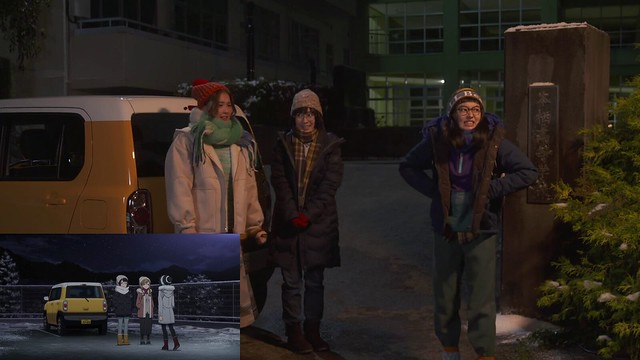 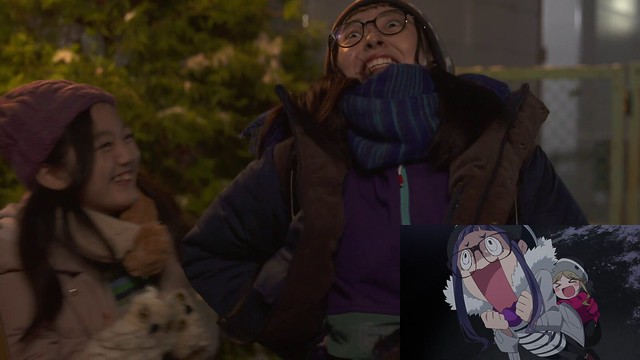 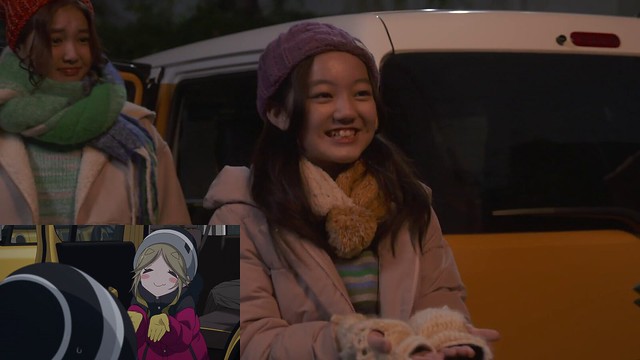 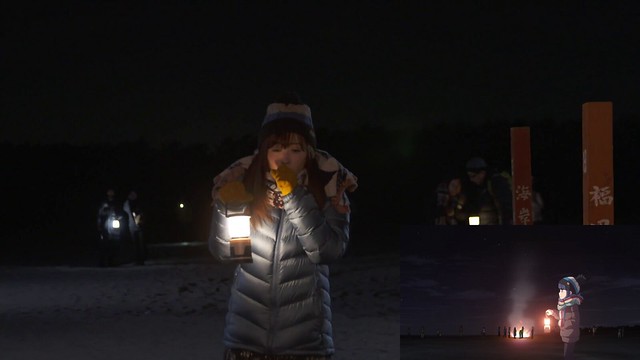 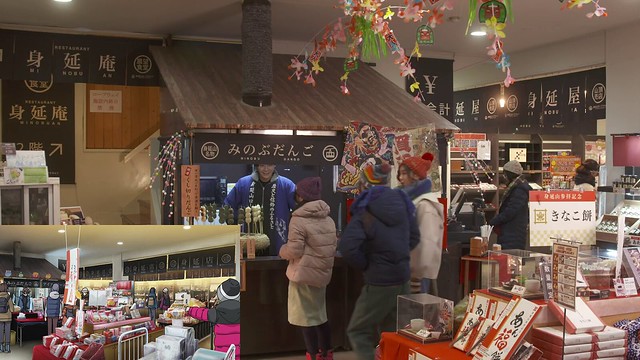 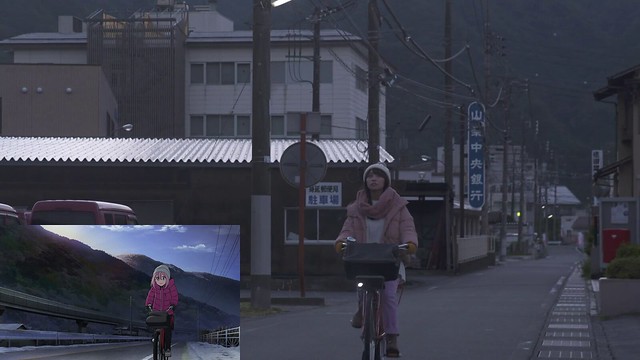 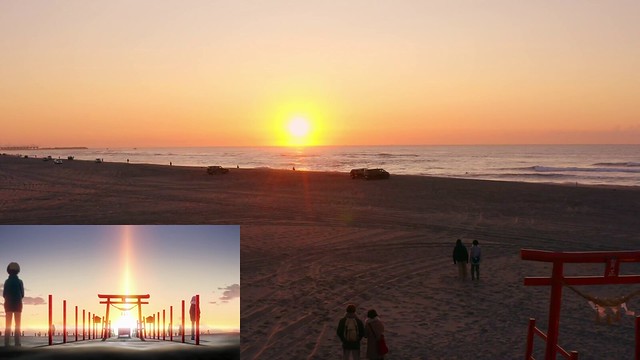 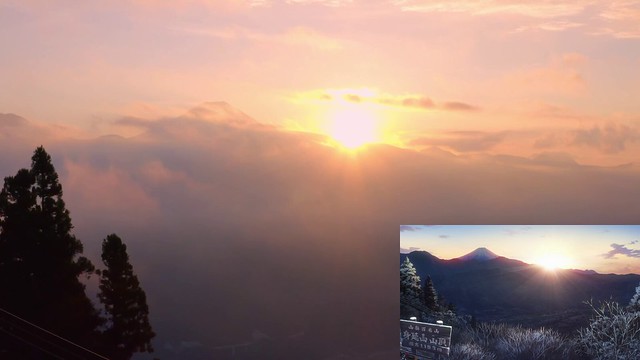 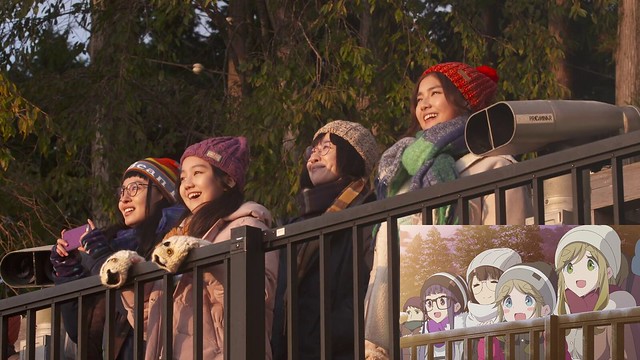 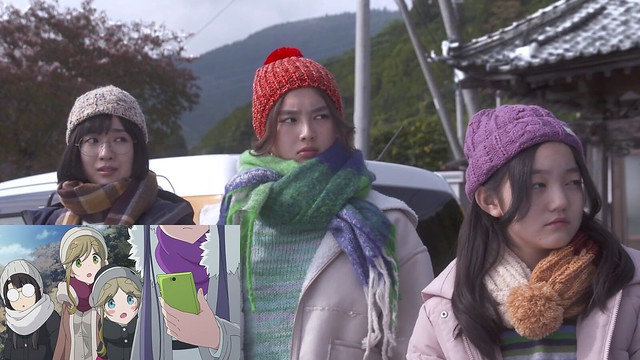 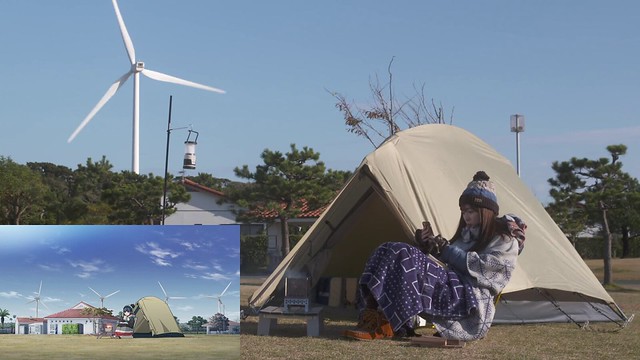 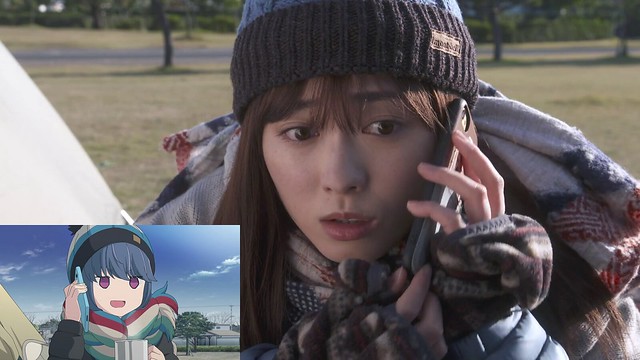 Entering Yuru Camp△ 2‘s live action drama, my only expectations for the series will be that it continues to portray camping eats as it did in the first season: Yuru Camp△ 2 gets everything right, but there are limitations to how effectively anime can render food. The contrast in colours and textures on well-crafted dish in real life are unparalleled, and this was where the live action adaptation stood out from the anime. Because Yuru Camp△ 2 had an emphasis on food, to an even greater extent than its predecessor, it would be most enjoyable (and perhaps hunger-inducing) to see all of these foods in the real world. Beyond the food, I am very much looking forwards to seeing how Yuru Camp△ 2‘s live action drama brings the events of the second season to life: the first drama had done a phenomenal job in mirroring the camping excursions at Lake Motosu, Koan, Lake Shibire and Fuefuki, to name a few, so I am definitely excited to see new locations (especially the geospots at Izu) brought to life. Finally, while Yuru Camp△‘s drama is typically faithful in reproducing the order of events from the anime and manga, the series has also previously made minor adjustments to fit things a little better, so I am interested to see how any changes to things like locations will be helpful for folks who wish to visit these same places in the future. At present, I do have plans to write about Yuru Camp△ 2‘s live action drama once I’ve hit the halfway point, as well as after the finale airs: while I’ve already covered everything from a thematic point of view, there’s a unique charm about the drama, and I’m certain that there will be enough things to say about it as to warrant a few extra posts.