Super Cub: Review and Reflection at the ¾ mark

“Winter forms our character and brings out our best.” –Tom Allen

While their class prepare for their school’s cultural festival, Koguma and Reiko consider buying new work gloves to combat the cooling weather. Initially disinterested with helping out, they overhear their classmates speaking about how motorbikes lack the capacity to safely transport the coffee-making equipment needed for their class activities. Taking this as a challenge, Reiko and Koguma prepare their respective bikes to take the gear, further suggesting to Shii Eniwa, who’s leading the efforts, to prepare a bar in the event they are unable to get the gear back. In the end, Koguma and Reiko succeed in getting the gear. Shii expresses her appreciation by offering Koguma and Reiko coffee, as well as a desire to one day ride a Cub for herself. To get to know Reiko and Koguma better, Shii invites the two over to her family’s café, an eclectic establishment with European and American influences. After enjoying their coffee, Koguma and Reiko begin frequenting the café more frequently, and despite Shii’s embarrassment, ends up meeting both her parents. As autumn gives way to winter, Koguma and Reiko look for ways to winterise their Cubs. Shii has an unused abrasive wool sweater, and after taking it to their home economics instructor, ends up crafting it into a liner for Koguma and stockings for Reiko. With the leftover materials, Shii gets a thermos-warmer out of it. While the liner and stockings are helpful, the winter chill seeps into the bones anyways, forcing Koguma and Reiko to purchase windshields. Despite their initial reservations, the windshields allow the girls to ride their cubs for far longer than otherwise possible, filling Koguma with the optimism that the winter will be fine. Nine episodes into Super Cub, Koguma’s world has been completely transformed: through the decision to pick up the Cub that day, Koguma’s surprised that she’s now more open to people than before, and more welcoming of new experiences.

Super Cub‘s masterful use of colour has always been a fantastic component of this series – scenes become vividly coloured as Koguma makes a new discovery, or shares in a particularly happy moment. This imagery is plainly intended to decisively indicate that this is a moment worth remembering for Koguma, and of late, such moments begin to dominate the series. If colour is meant to denote noteworthiness, then the increasing presence of colour indicates that Koguma is opening up to her world, ever more willing to look forwards rather than inwards. Moreover, these colourful moments linger for longer and become increasingly indistinguishable from more ordinary moments. Altogether, while Koguma herself may not express it visibly or often, Super Cub makes it clear how she’s feeling about her life now. It is indisputable that the Super Cub has changed Koguma’s life, giving her the means to broaden her horizons both in a figurative and literal sense. The possibility that the Super Cub offers, and the attendant responsibility a vehicle demands forces Koguma out of her box, but at the same time, being a smaller vehicle, also allows Koguma to do things at her own pace. Shii’s introduction into Super Cub is a fine example of this: after impressing her and earning her gratitude, Koguma and Reiko slowly spend more time with Shii. 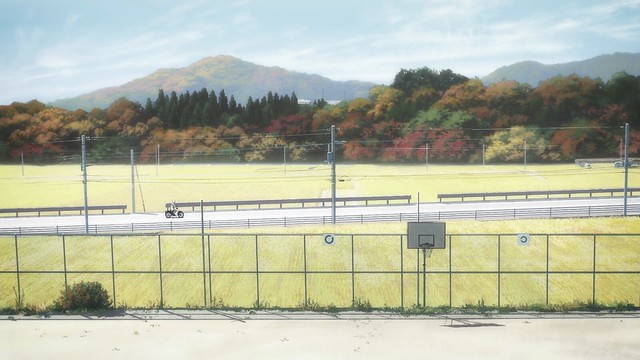 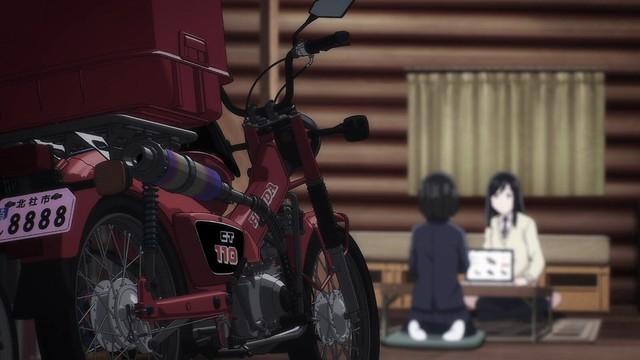 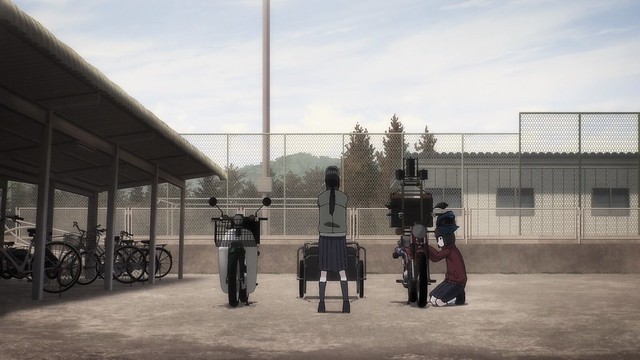 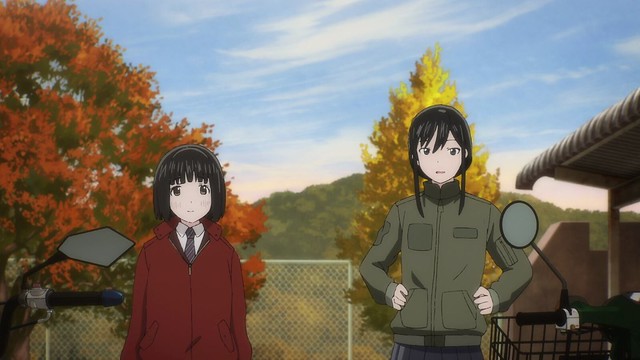 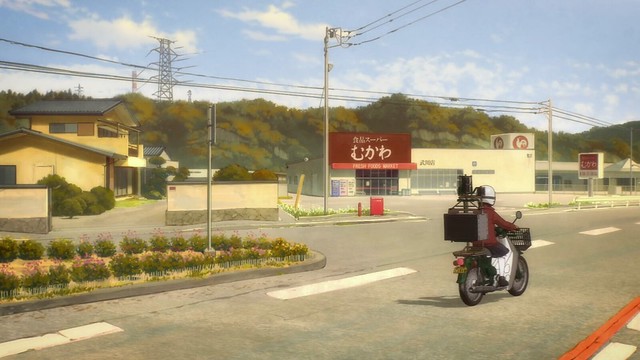 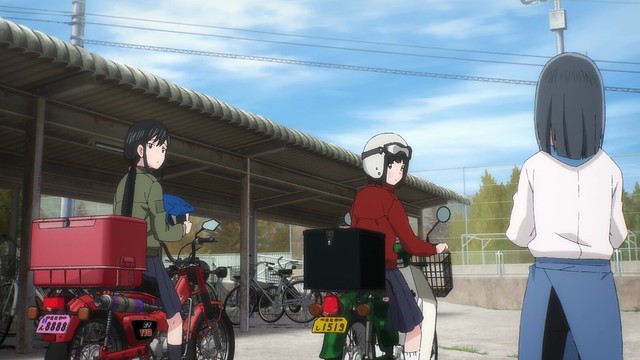 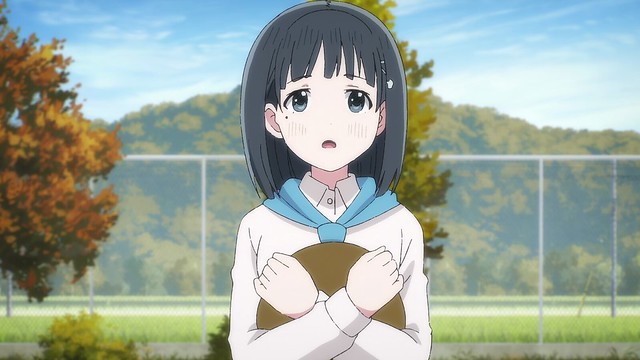 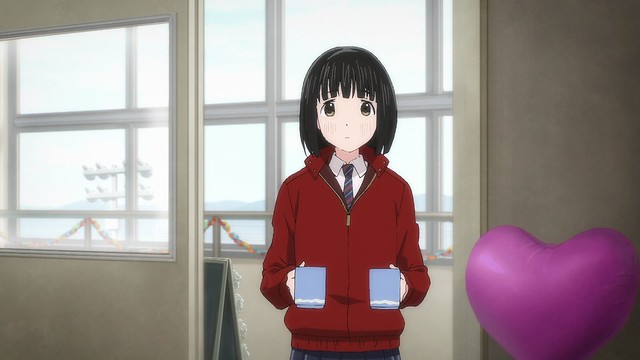 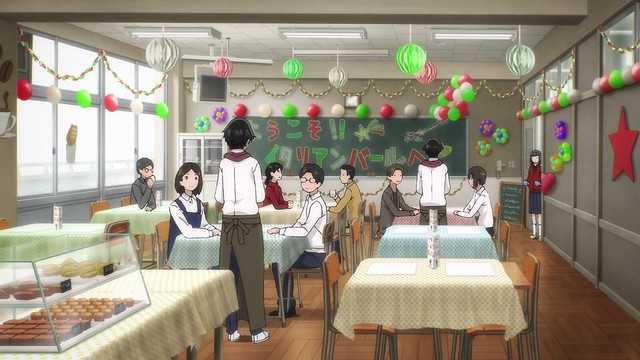 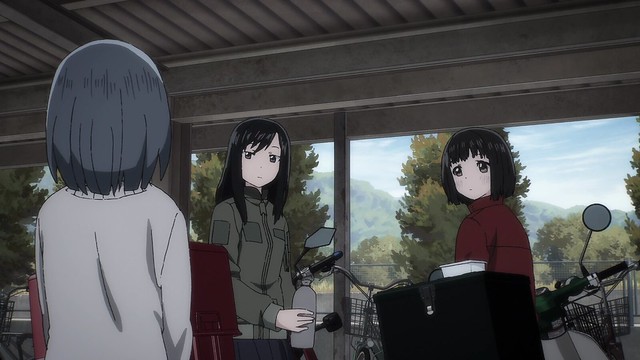 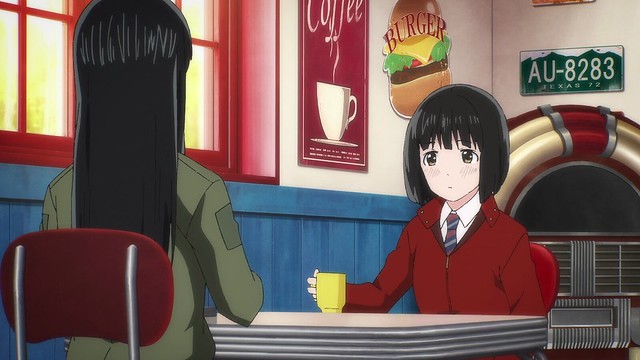 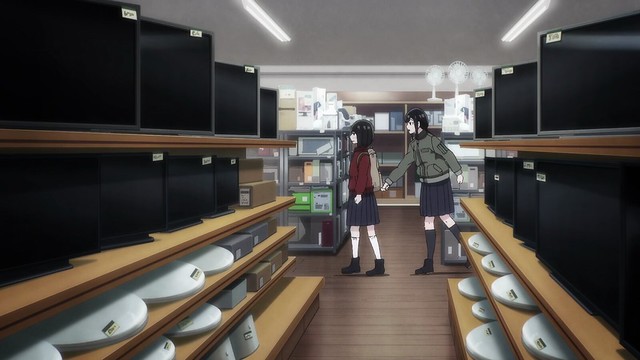 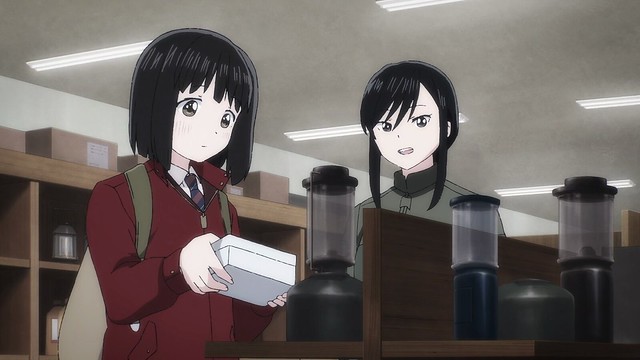 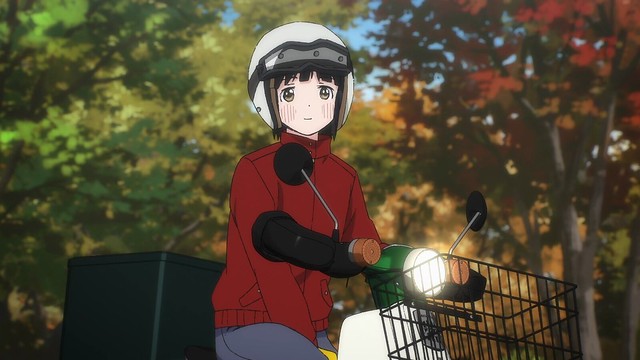 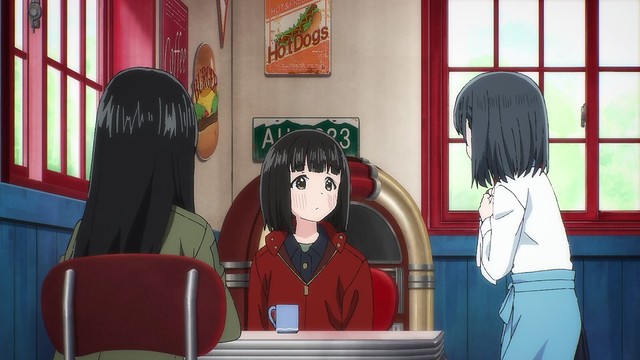 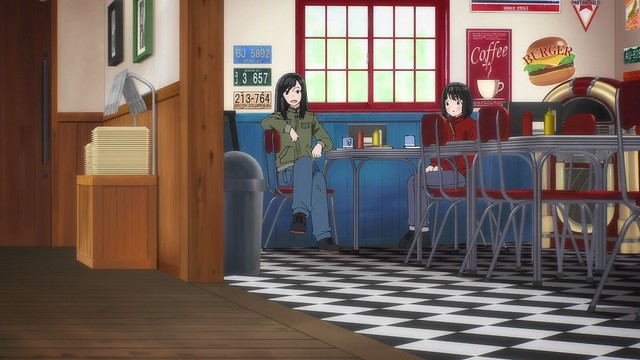 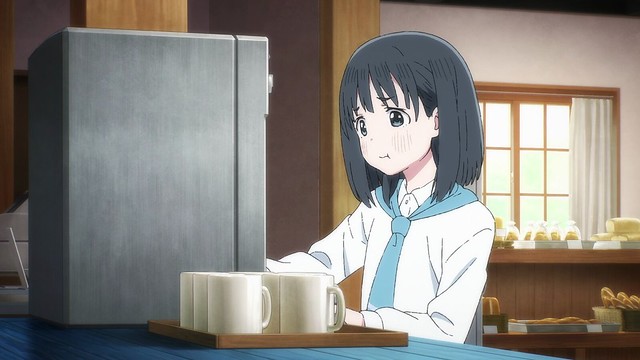 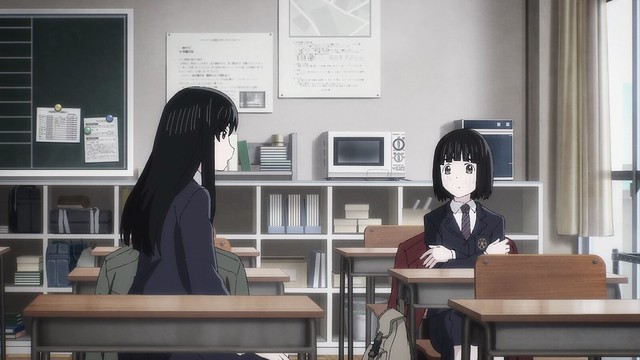 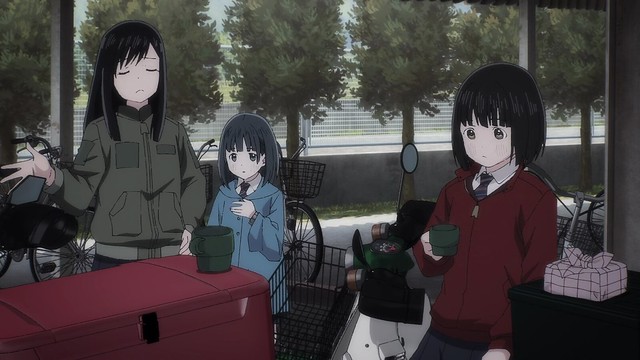 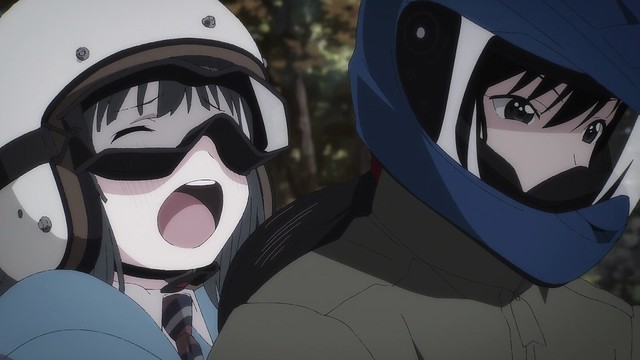 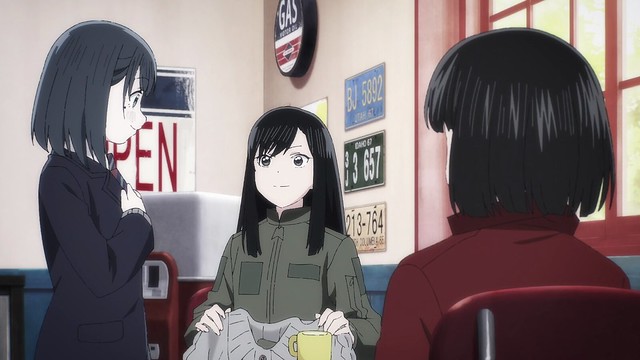 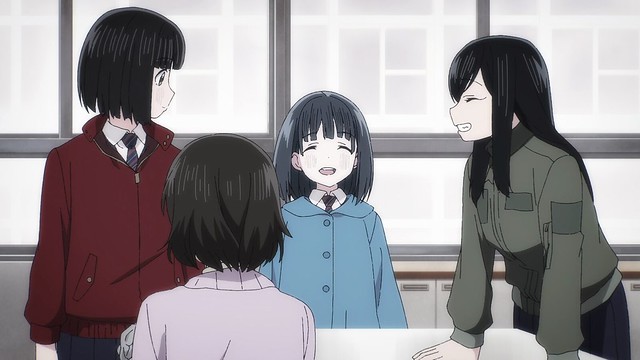 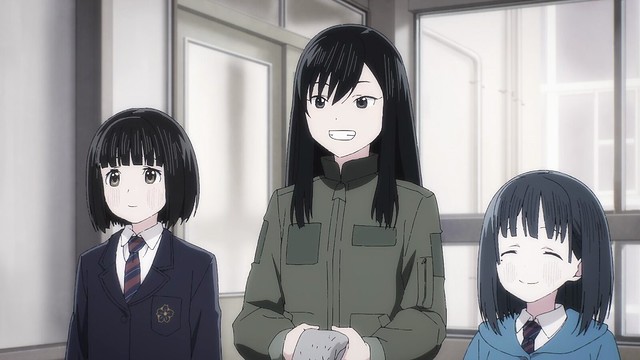 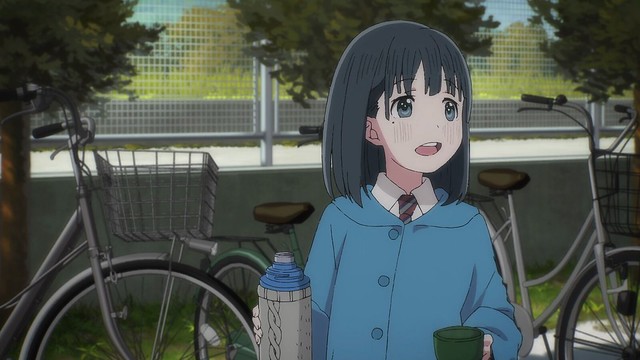 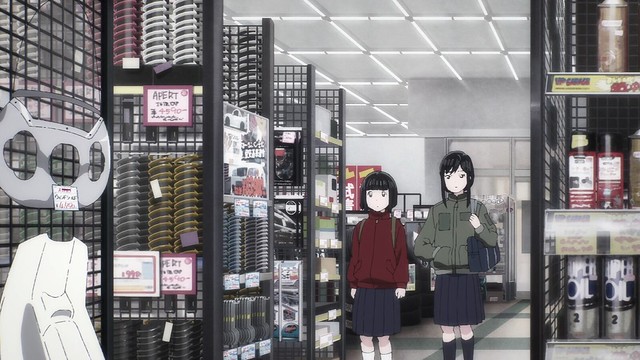 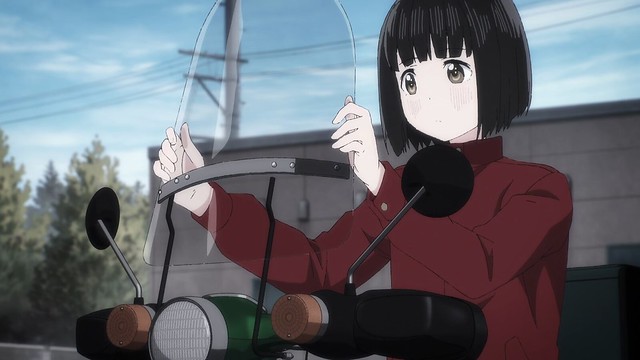 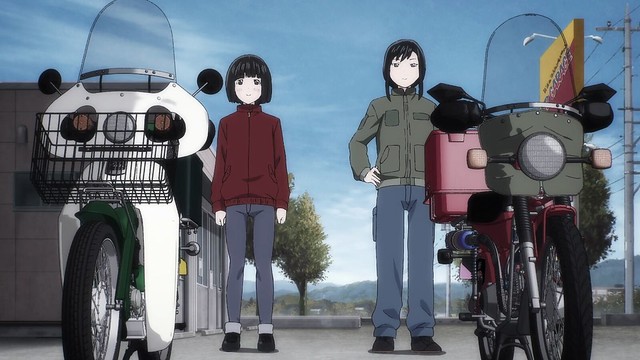 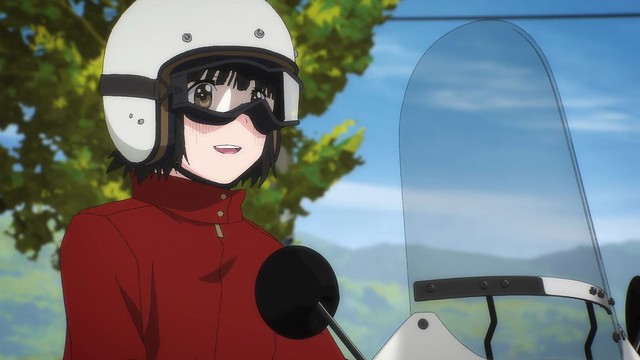 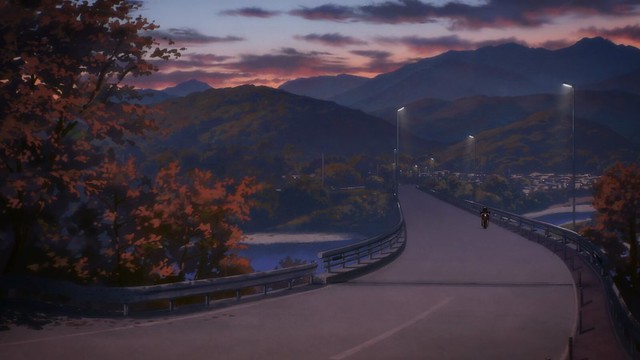 Shii’s addition to the cast creates a newfound dynamic among the cast – Shii is utterly in awe of Koguma and Reiko’s bikes, often looking to Koguma for answers where Reiko’s tendency to joke around or exaggerate leaves her in doubt. In Super Cub, Shii’s role is denoted by her diminutive stature: Koguma is taller than Shii, and Reiko is tallest of the three. Each character’s physical presence seems to correspond with their familiarity with the Cub, with Reiko being the most relaxed and experienced, and Shii being a novice. Koguma, then, stands in the middle; she’s still a learner, but has accumulated enough experience to impart her own knowledge on Shii, where Reiko might otherwise be irreverent or joking. As such, with Super Cub entering its final quarter, the story is beginning to speak of the same themes that Non Non Biyori: Nonstop covered; the passing of the torch and how everyone begins their journey differently means that learning is an infinitely varied experience, and towards the end of Super Cub, the series’ aims will be to show the sort of positive impact Koguma herself has on others through taking up riding – learning and teaching has made Koguma’s world more colourful, and while she might’ve started out with nothing, having an open mind will make everything that she sought within reach, bringing newfound warmth and colour into her world in ways that she’d never imagined possible prior to purchasing her Super Cub.