Super Cub: Review and Reflection At The Penultimate Episode

“Patience is when you are supposed to be mad, but you choose to understand.” –Unknown

On a snowy day, Koguma is reluctant to go out, but when Reiko shows her a new acquisition (tire chains), Koguma braves the snow to swing by Reiko’s place. Once their chains are installed, Reiko convinces Koguma to accompany her to a snow-covered field, where the pair spend an afternoon doing stunts on the field and share lunch together. Later, inspired by Koguma and Reiko, Shii decides to take a mountain path into town, but falls into a frigid creek while biking and makes a call to Koguma for help. Upon arriving, Koguma pulls Shii from the water and sets her in her Super Cub’s front basket before whisking her away for home. She also asks Reiko to retrieve Shii’s Alex Moulton from the river. After Shii’s had a chance to warm up with a bath, she settles down for curry udon with Koguma and Reiko. However, Shii bursts into tears after it hits her that her Alex Moulton’s been totalled. She begs Koguma to bring her into spring, but Kogama laments that even a Super Cub can’t accelerate the passage of time. Shii thus begins riding a loaner bike to school, and the days begin passing by in the blink of an eye. Soon, winter retreats, and spring gradually returns to the world. However, Shii’s melancholy seems to persist – Koguma notices that she’s lost her drive to work on her Italian café. She realises that Shii had impacted her life in ways she couldn’t imagine after recalling it had been Shii who’d passed her en route to school, encouraging her to get a Super Cub. Grateful to have befriended Shii, and also to help bring the colour back into Shii’s world, Koguma suggests that Shii accompanies them on a ride to Kagoshima, where the cherry blossoms are in bloom and the sun is warm. This is Super Cub on the eve of its finale, a gentle tale of discovery, of ups and downs that accompany learning, and of unexpected friendships that grow as disparate people, unified by a common love, get to know one another better. Here at the penultimate episode, Super Cub has proven to be a slow journey that is quite unlike the more spirited pacing of other slice-of-life series, where energy and curiosity creates much of the excitement. Instead, with its more gradual development, Super Cub conveys a more unconventional experience, which is something that not all minds will appreciate.

Towards its ending, Super Cub chooses to go in a more dramatic direction by having Shii plummet down a slope into a frigid river when she takes a ride up a narrow trail. This sets the stage for Koguma to go in and rescue her; whereas Super Cub had largely been about Koguma’s own discoveries and helping those along the way with her Cub, this final incident seems to be the author’s wish to suggest that particularly strong friendships and large changes to one’s world-views are only brought on by equally extraordinary circumstances. To create a plausible reason for why Shii ends up purchasing a Super Cub of her own and admiring Koguma to the extent that she does, the writers elected to go in a direction that prima facie seems quite out of place in the slow-placed Super Cub. The end result of this is that it gives Koguma a chance to really step back and appreciate what her Super Cub means to her, as well as understand what she means to Shii (and vise versa). Having now saved Shii from a difficult situation, Koguma is similarly forced to reflect on how chance encounters have set her down a completely different path, one where she now has something of value in her life worth looking forward to. While perhaps a bit jarring, having Koguma save Shii unequivocally removes any doubt that Koguma’s changed – she’s resourceful and caring, even if her outward appearance speaks otherwise, and this suggests that as Koguma spends more time with Shii, her heart and manner will begin softening up, as well. We recall Koguma has a very blunt manner because of how little she interacts with others, and since Shii’s personality is the opposite, being a right ray of sunshine that had spurred Koguma on. The ensuing friendship can only be a positive thing for Koguma and Shii as we move towards the future, and like Koguma, Super Cub may seem a little rough around the edges, but the intents are clear enough. 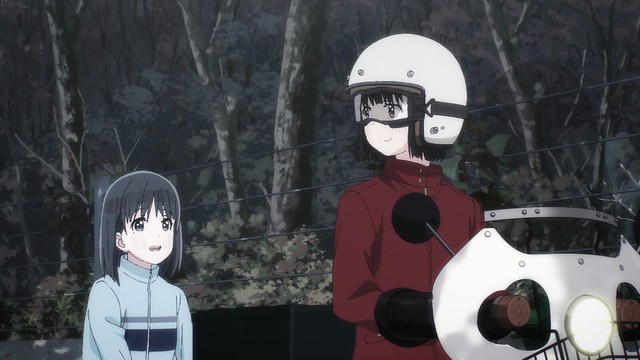 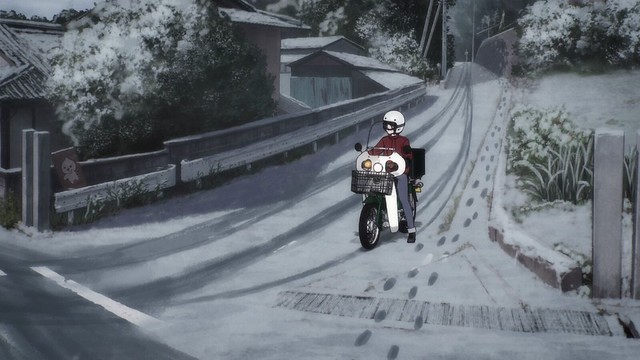 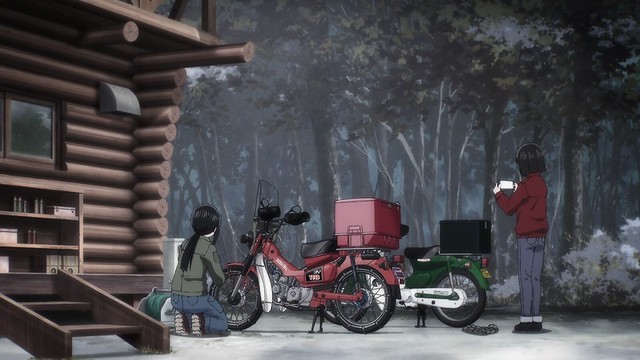 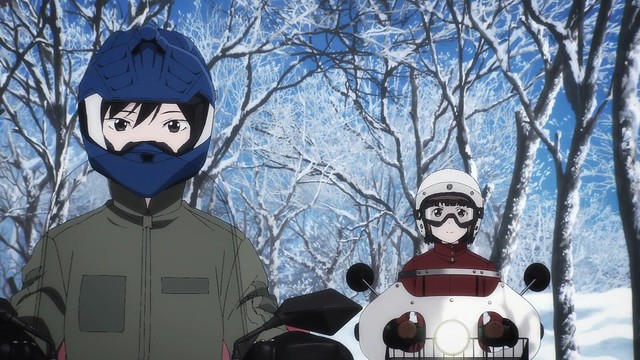 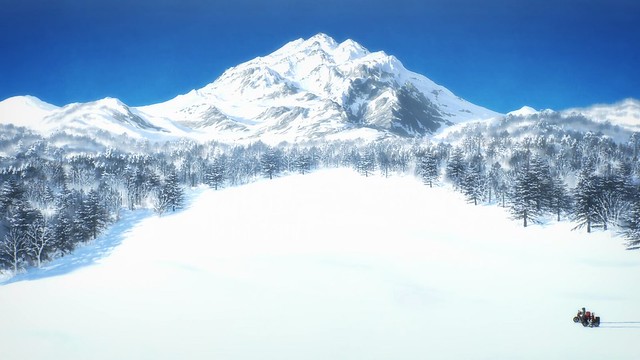 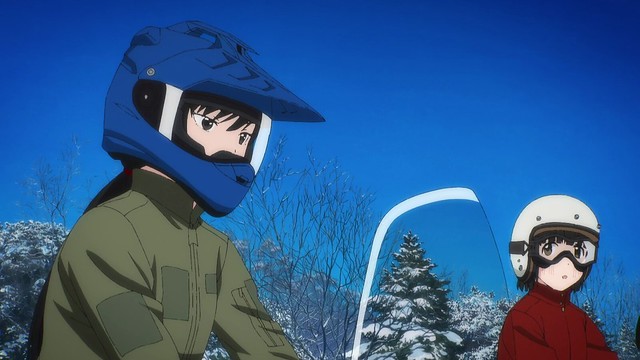 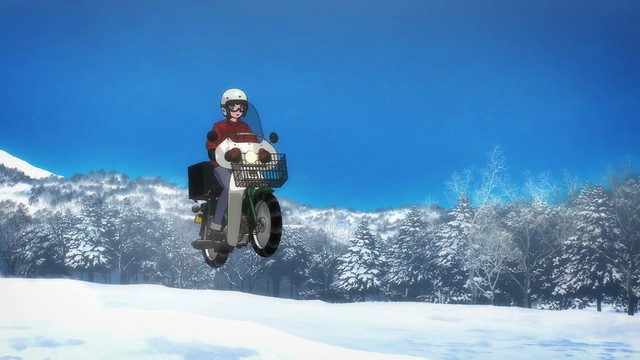 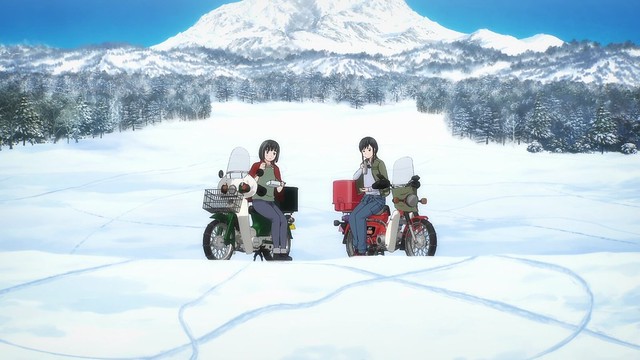 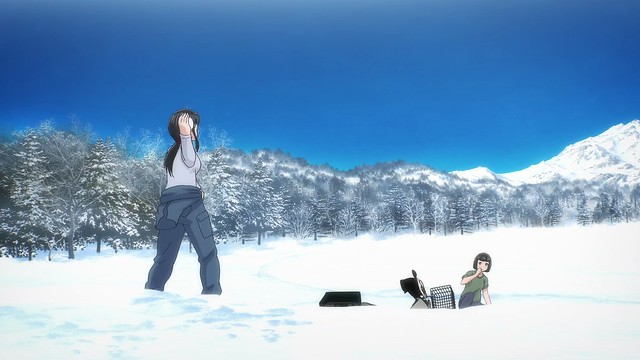 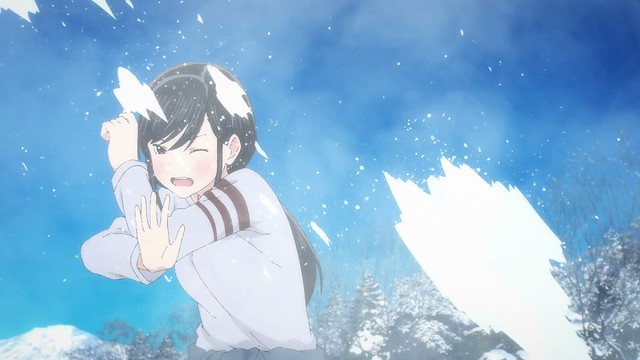 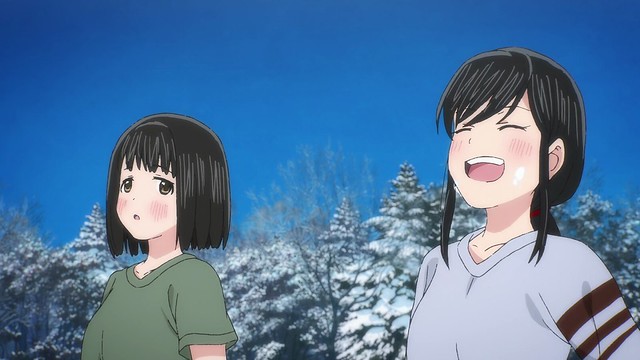 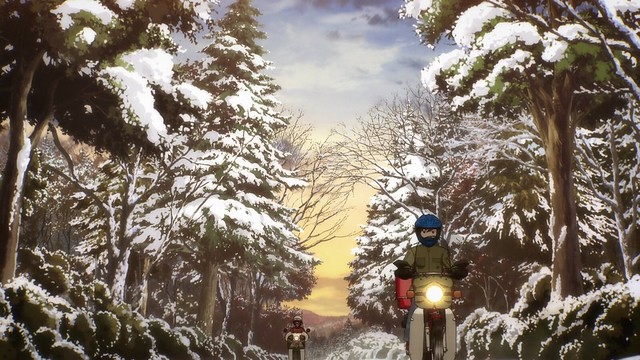 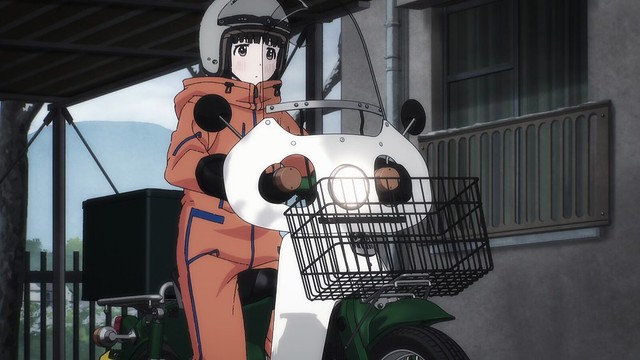 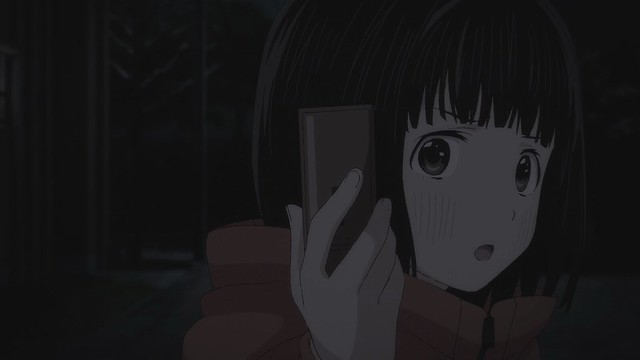 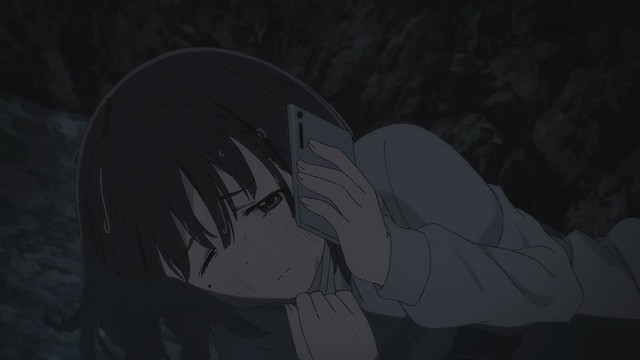 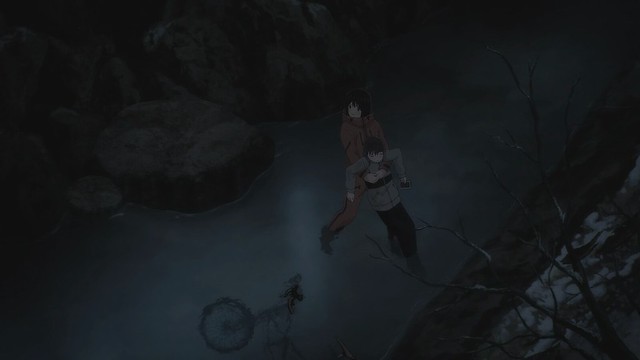 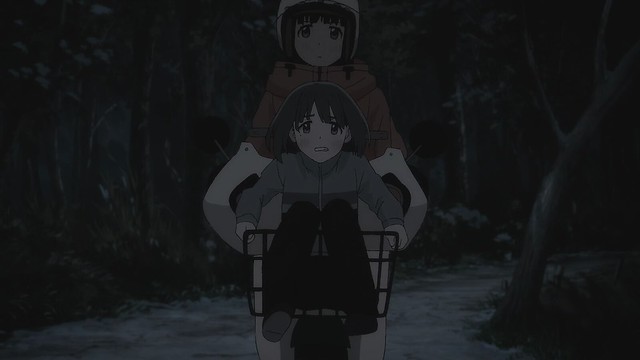 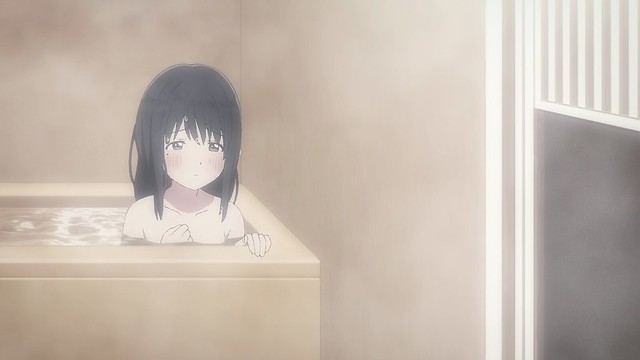 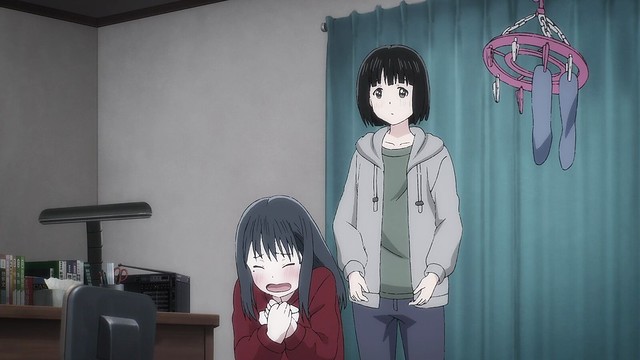 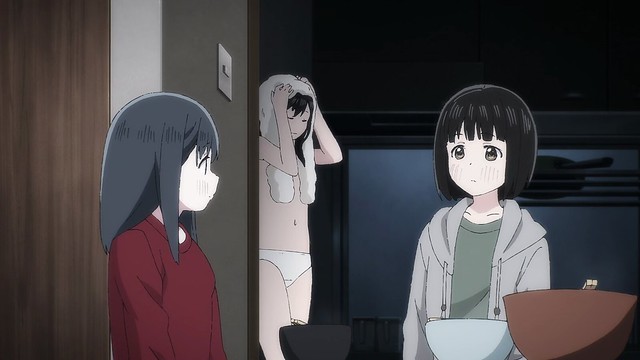 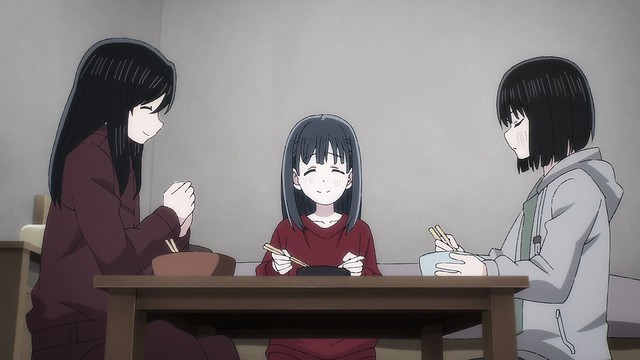 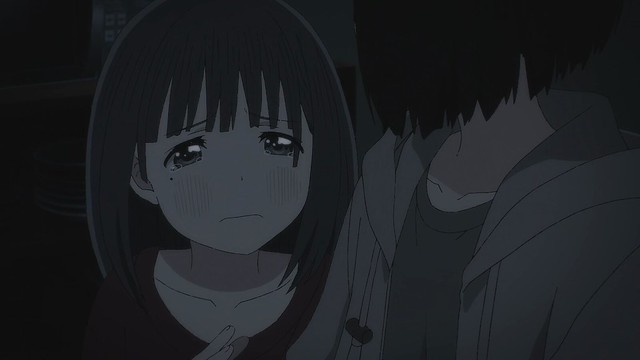 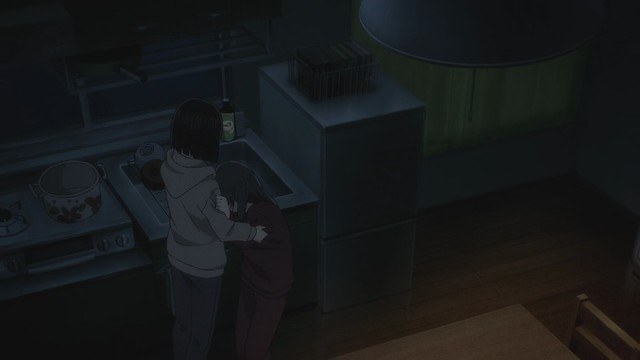 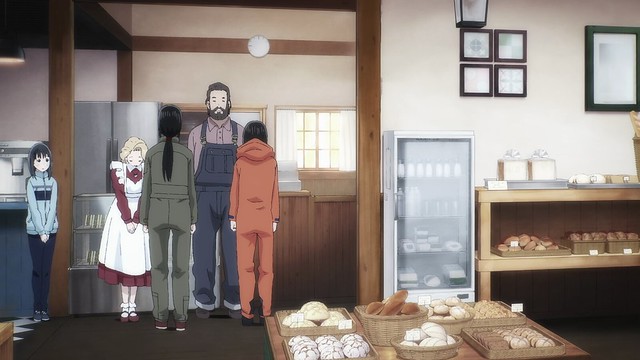 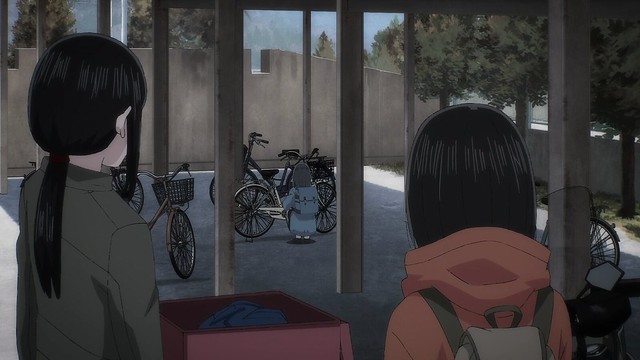 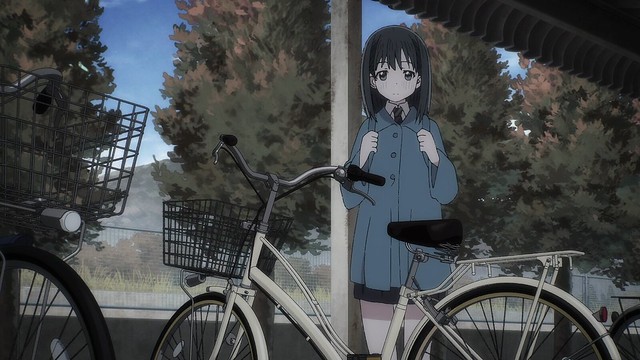 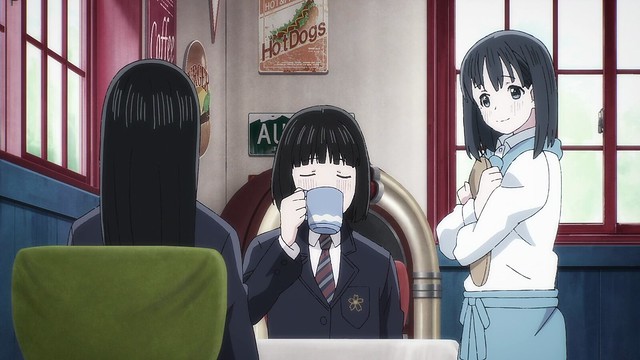 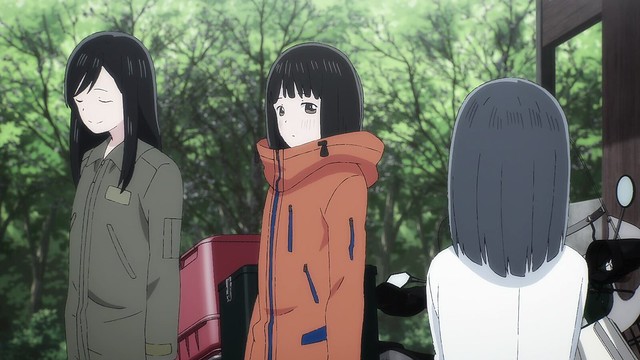 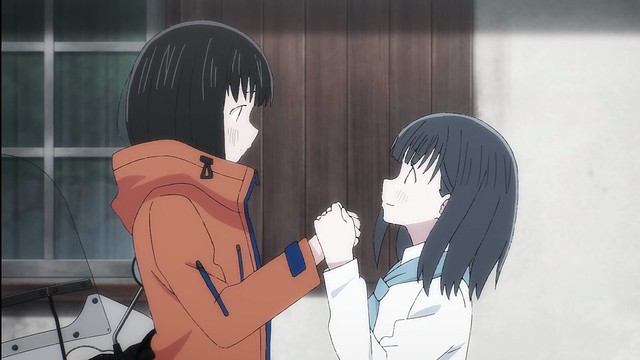 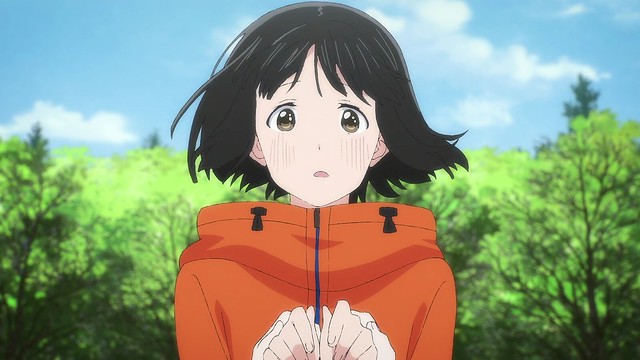 An incident as dramatic as a fall into the river, and the subsequent falling action suggests that Super Cub has passed its climax, the tensest of moments, in its story. By demonstrating that Koguma is able to handle emergencies without missing a beat, viewers are assured that whatever adventures (and the unexpected things that accompany them) may present themselves, she’s ready to handle them, whether it be reigning the excitable Reiko back or walking Shii through something she’s never seen before. I therefore anticipate that Super Cub‘s finale will likely have Koguma and Reiko help Shii to get some new wheels – it is evident that Shii has come to greatly treasure her unusual bike, as it reminds her of her newfound friendship with Reiko and Koguma, and with plans to visit Kagoshima, a 1300 kilometre journey requiring a minimum of sixteen hours to traverse one-way, it is improbable that Shii would bike this entire distance on her loaner bike. Having said this, covering such a journey in one episode is unfeasible, and further to this, Shii also needs to earn her operator’s license before any road trip can be had. As such, I anticipate that the finale will be about getting Shii set up for a life-changing journey with Koguma and Reiko, not as a follower, but as a peer. Shii’s new wheels would signify a transformation of sorts, and set the stage for the story to continue: much as how Koguma herself had transformed after getting her Super Cub, the changes she experienced are now beginning to be imparted on Shii, as well, representing a transfer of knowledge and of a great love for one’s hobby. In this way, Super Cub has completely succeeded in presenting its themes, although admittedly, going from the limited discussion out there of this series, it stands to reason that more folks could stand to give this series a go owing to its portrayal of how newfound freedom, and its attendant responsibilities, change people’s circumstances for the better as they get to meet more people.

4 responses to “Super Cub: Review and Reflection At The Penultimate Episode”