The Aquatope on White Sand: Review and Impressions After Three

“You usually have to wait for that which is worth waiting for.” –Craig Bruce

Kukuru allows Fūka to help out around Gama Gama Aquarium, and suggests that Fūka stay with her and grandparents in the interim. However, on her first day, Fūka, unaccustomed to dealing with penguins, slips and falls into the pool. Kukuru ends up lecturing Fūka on the importance of their main duty to look after the animals and ensure their safety. It turns out that Kururu had taken up the post of acting director with the aim of saving Gama Gama Aquarium from being closed down – the aquarium is of special significance to her, and while its age, coupled with dwindling visitors makes it difficult to bring their implements up to code, Kukuru is intent on finding a way to make things work out. That evening, Fūka calls home to let her mother know of her rough whereabouts. The next day, a pair of shady-looking loan sharks appear, hoping to rope Kukuru into some sort of scheme. Having heard Kukuru’s story from Karin, Fūka ends up driving the loan sharks off after they destroy Gama Gama’s hand-made sign. Kukuru invites Fūka to meet Tsukimi and Kai at the Teruya’s diner. Kukuru apologises to Fūka for being short with her, and Fūka promises to do what she can for Kukuru. The two also begin to get to know the penguins a little better. However, upon spotting that one of the older penguins, Choko, has ulcerative pododermatitis, Kukuru decides to call an a veterinarian who is on maternity leave. While she consents to come in and have a look, she unexpectedly begins going into labour. Without any available transportation, Karin ends up driving her to the local maternity home, where she gives birth to a baby boy. The veterinarian reveals to Fūka that she had a pleasant dream while at the aquarium and is happy her child’s birth was so memorable. Later, Kukuru spots Fūka with the penguin keychains that she’d designed, and resolves to do something new. Here at the three episode mark to The Aquatope on White Sand, it is evident that this series is going to head down the same route that Sakura Quest once did, while simultaneously combining notions of self-discovery and growing up from The World in Colours and Tari Tari. However, The Aquatope on White Sand simultaneously betrays nothing about what milestones will be hit in this journey, and so, the anime ends up succeeding in creating intrigue within its episodes.

Fūka and Kukuru’s actions in The Aquatope on White Sand lie at the forefront of all present discussion; this is to be expected, given that personal growth and professional development is central to coming-of-age series such as these. However, discussions have been unjustly harsh – when Fūka panics from the penguin’s forward behaviour during feeding time and slips into the pool, Kukuru delivers a tongue-lashing about how any carelessness surrounding the animals is grounds for termination because their aquarium’s first and foremost objective is looking after the animals. Rather than making any sort of effort to understand why Kukuru is as tense as she is, discussions swiftly point fingers at Kururu for not providing proper instructions. However, The Aquatope on White Sand makes it a point to indicate that Gama Gama Aquarium is of personal importance to her, reminding her of the time she spent with her late parents. While it is true that Kukuru is headstrong and stubborn, her intentions are admirable, and being a high school girl, she’s impatient and unlearned in some ways. These are character flaws that exist within all of us at that age, and over time, our experiences allowed us to outgrow them such that we could approach problems more calmly and rationally. Similarly, Fūka herself is being criticised for quitting her idol position on a whim and wandering about without giving her future any second thought, taking on positions she has no background in. However, had Fūka chosen to tough things out and make her idol career work out, The Aquatope on White Sand wouldn’t exist. Instead, her journey is meant to be a story of what experiences, both good and bad, lay ahead on a path whose destination is not clear. Altogether, The Aquatope on White Sand is a story that asks of its viewers a modicum of patience – one does not grow up overnight, and it is precisely by stumbling, making mistakes, and above all else, learning, that one begins to mature. P.A. Works’ stories require that one understand where the characters are coming from, rather than judging them; to do the latter would be to close one’s mind to the possibility of growth, and it does one no credit to be overly critical of the characters’ actions this early on, especially in the knowledge that the characters will be their best selves as things continue. 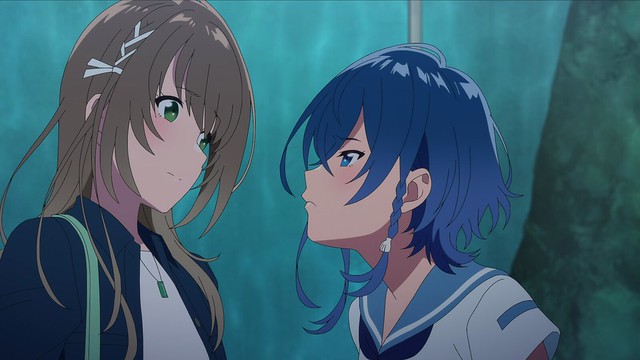 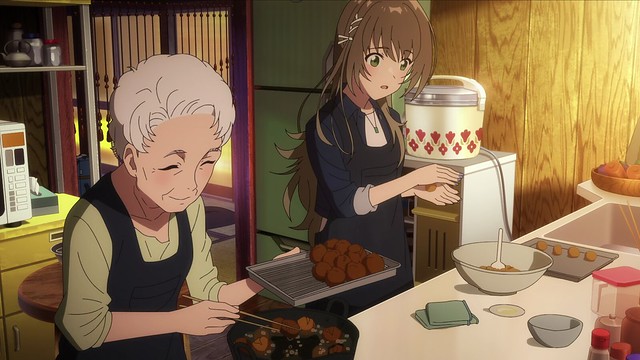 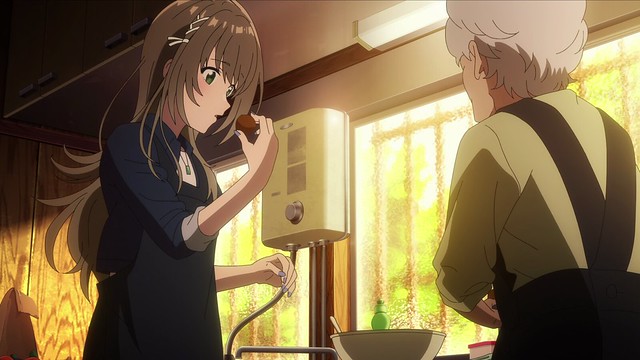 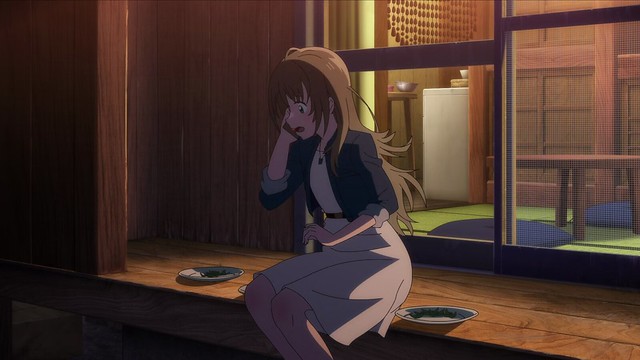 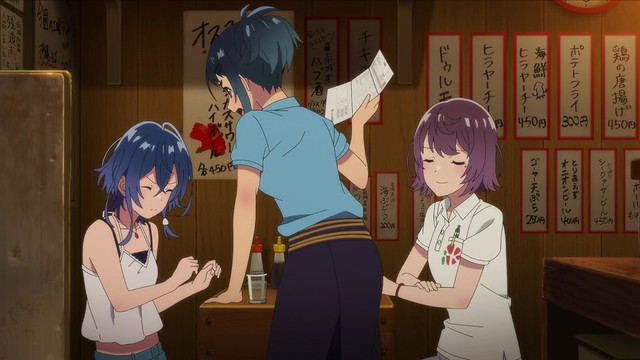 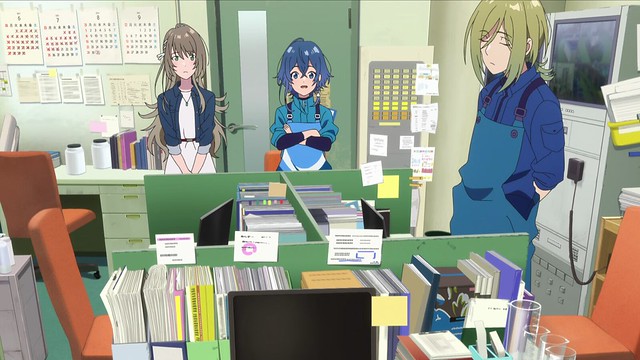 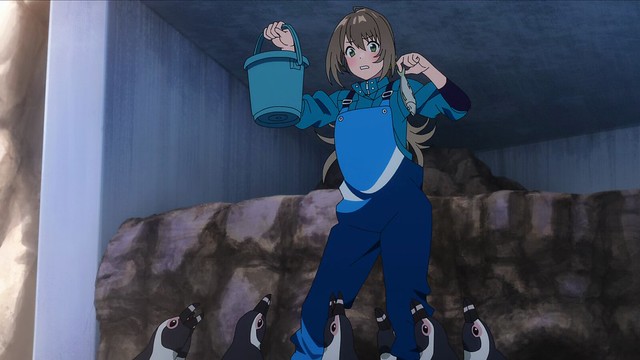 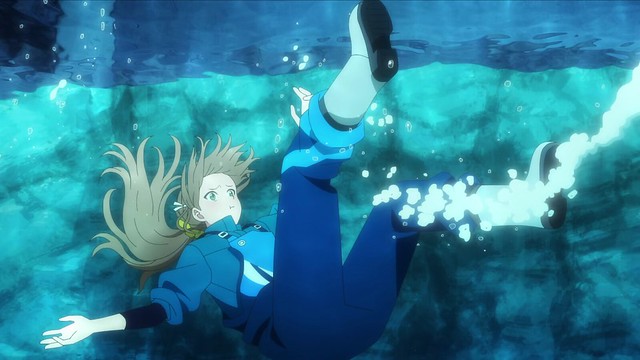 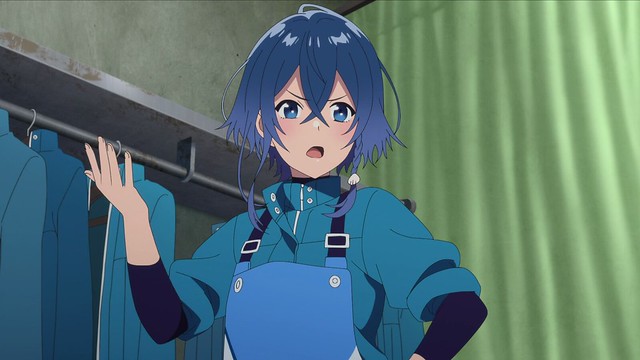 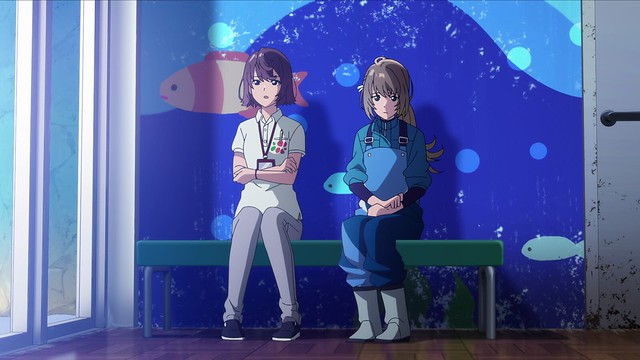 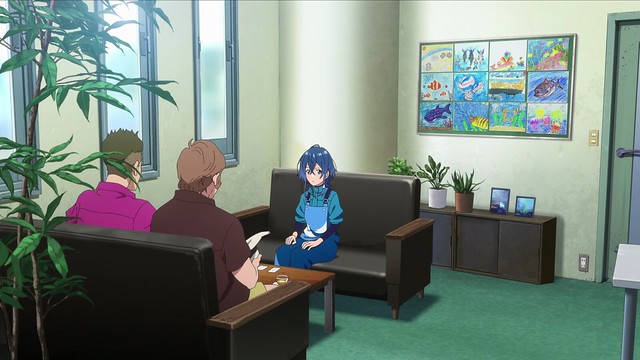 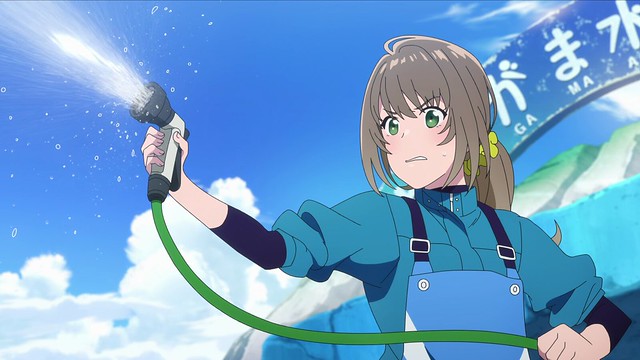 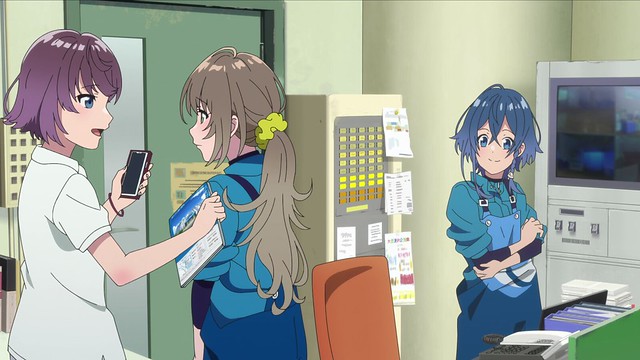 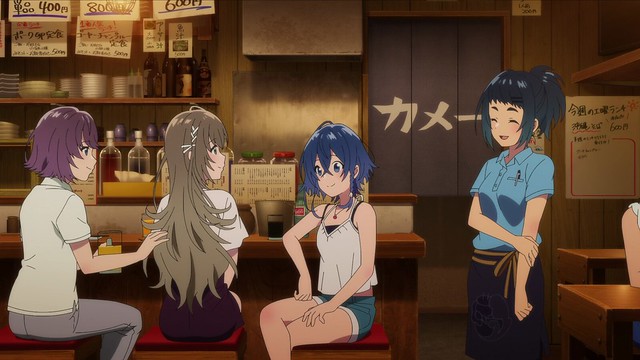 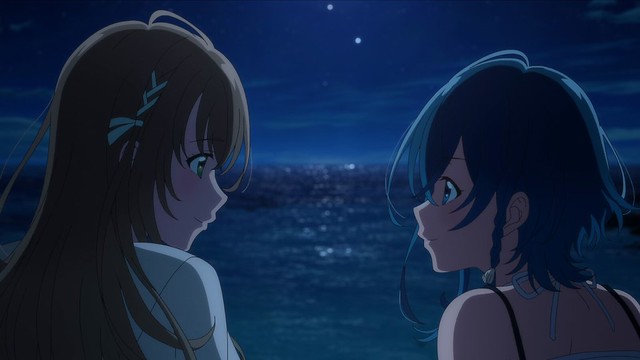 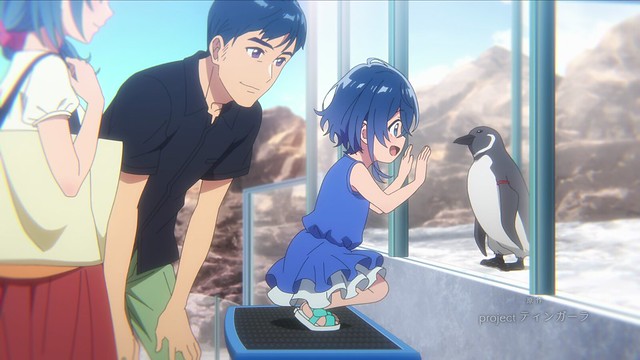 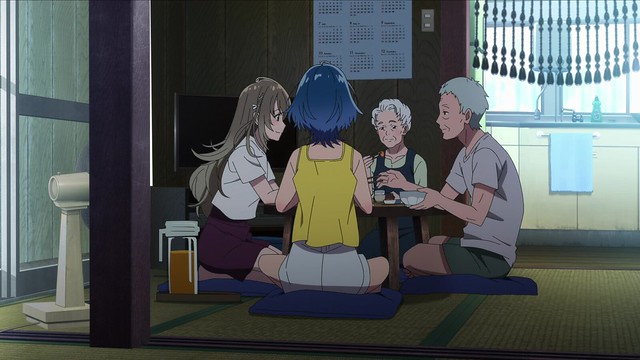 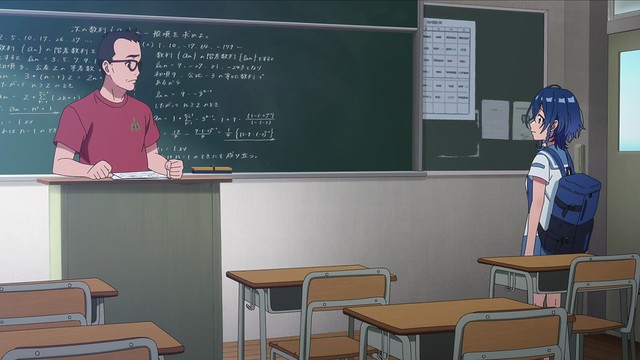 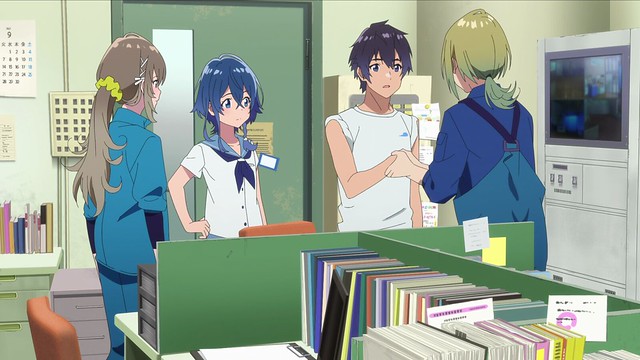 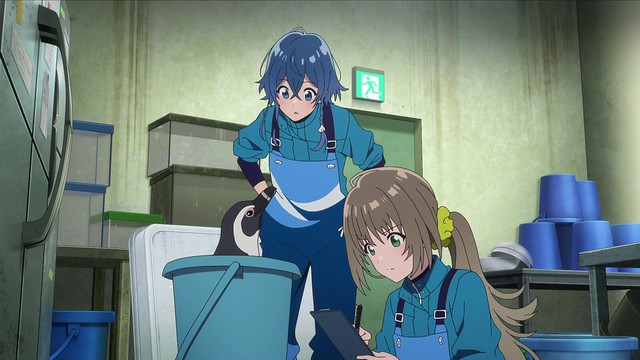 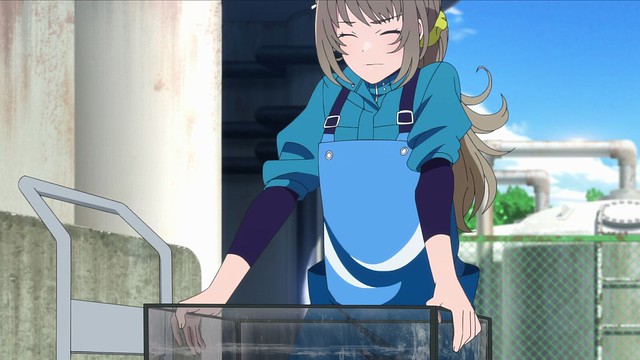 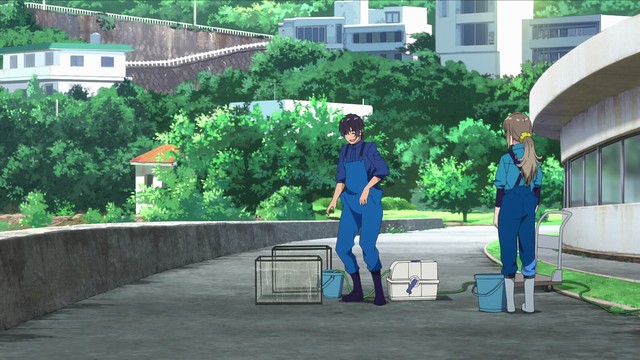 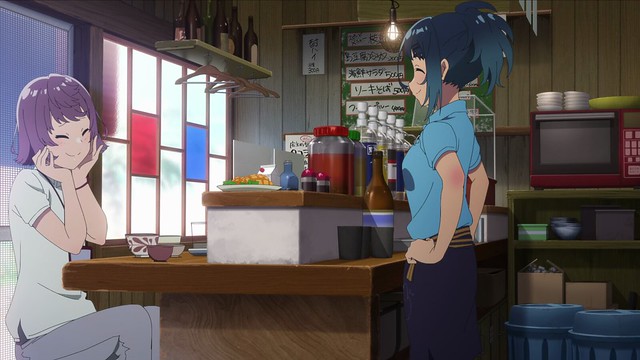 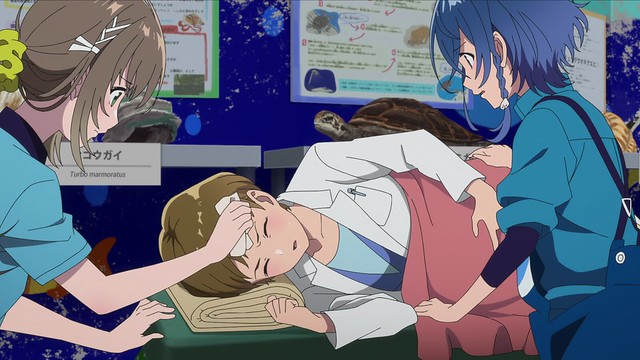 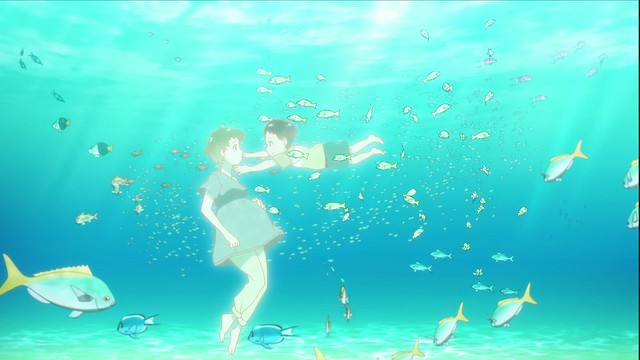 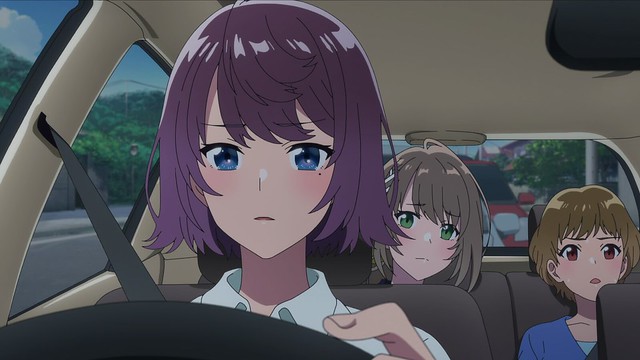 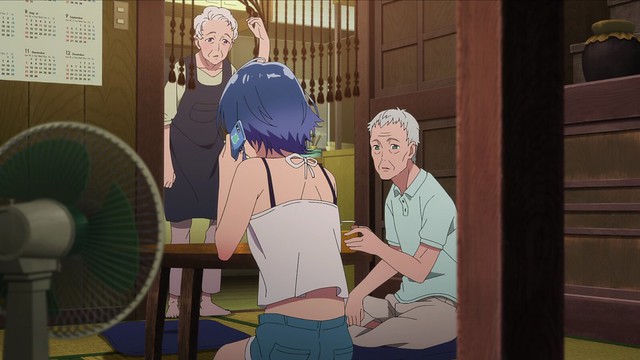 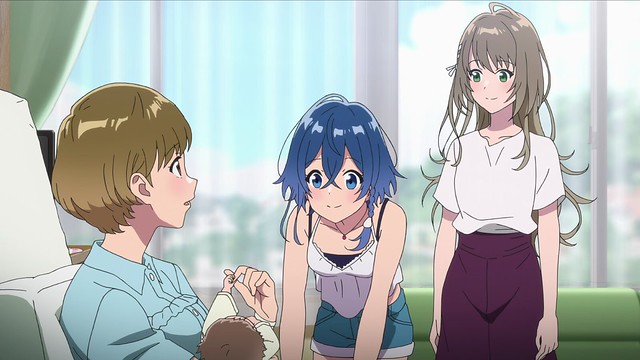 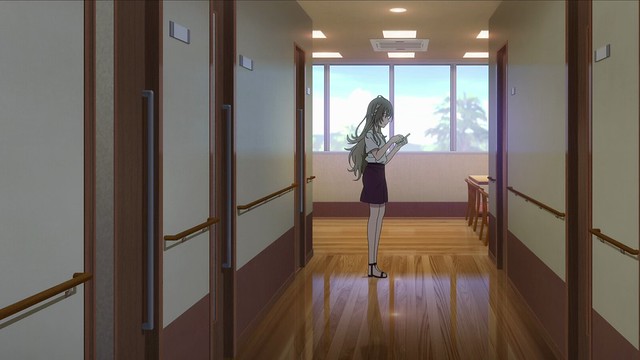 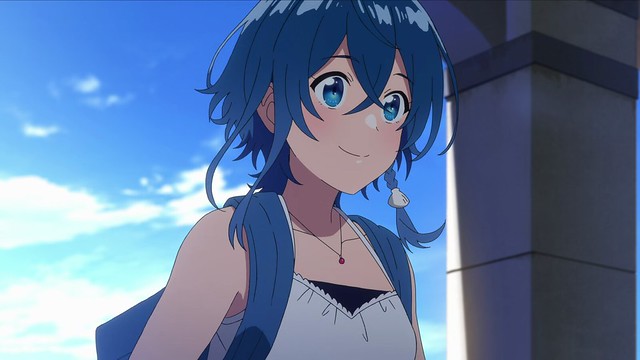 The slower pacing of The Aquatope on White Sand means that additional time can be spent on really allowing the characters to make discoveries – like Sakura Quest, Shirobako and Hanasaku Iroha, The Aquatope on White Sand will utilise this space to have the characters make mistakes, properly learn from them and enjoy the results of their effort to better themselves. As such, I anticipate that the road ahead is going to be a bumpy one, but also one where the prize for overcoming adversity is well worth it. Three episodes into The Aquatope on White Sand, Fūka and Kukuru’s personalities have also been better established; cursory comparisons to The World in Colours‘ Hitomi and Kohaku are no superficial, and it becomes clear that The Aquatope on White Sand is going to present something new to viewers. While Fūka and Kukuru begin the first steps of realising a dream to save Gama Gama Aquarium alone, it is fortunate that they have some friends in their corner. Tsukimi and Kai will almost certainly be steadfast allies in helping the pair to save the aquarium, and where opinion from an adult is required, the group can count on help from Karin, the town’s tourism association manager, whose knowledge of the area and experience will serve as a guiding light for the youth as they seize the initiative. While Fūka herself might be a complete novice in zoology, viewers must recall that she also brings a very distinct skill-set to the table as a former idol. The Aquatope on White Sand reintroduces the idea that applying one’s skills from a new perspective can have large benefits, and I look forwards to seeing Fūka become more confident as she gets to know Kukuru and the others better. At this point in time, I’m still weighing the matter of how frequently I should write about The Aquatope on White Sand; on one hand, publishing my thoughts every three episodes would allow me to adequately cover both big-picture elements and smaller details, but the flipside is that I could grow stale very quickly if I write often for the series. For now, as we are still early in the series, I will likely make a decision after the sixth episode – if there’s enough to consider every three episodes, then readers can reasonably expect to enjoy more talks The Aquatope on White Sand in the future!

6 responses to “The Aquatope on White Sand: Review and Impressions After Three”