The Aquatope on White Sand: Review and Impressions After Six

7 Comments Posted by infinitezenith on August 14, 2021

“Vision is the art of seeing what is invisible to others.” –Jonathan Swift

In order to be more useful at Gama Gama Aquarium, Fūka works hard at learning about the different species that are present and helps Kukuru to host a touch aquarium event, during which visitors are allowed to gently handle some of the aquatic life. Knowing that their audience includes young children, Fūka decides to spice things up and makes displays that appeal to younger visitors. Kukuru decides to make Fūka the attendant, and despite the latter’s reservations, she ends up doing a solid job of keeping visitors engaged. However, some visitors soon recognise Fūka as an idol, and Kukuru pulls Fūka aside to give her some space. In the aftermath, the pair reconcile and return to their duties. Fūka’s mother arrives in Okinawa shortly after with the goal of bringing Fūka home, and although Kukuru suggests that Fūka try to make a break for it, she ends up returning to the aquarium after growing worried about one of the fish there. Fūka’s mother soon sees her working with Kukuru, and happy that her daughter is fine, Fūka’s mother consents to let her stay in Okinawa to help Gama Gama Aquarium out, contingent on the condition that Fūka returns home when term resumes. Hoping to bring in more visitors, Kukuru struggles to come up with an idea, but after Umi-yan brings ice pops into the office after hours, Kukuru feels it’d be nice to offer sweets. Although Tsukimi suggests ice cream, Karin shuts the idea down owing to the health and safety regulation that ice cream vendors must adhere to. Inspired, Tsukimi goes with shaved ice with an aquatic twist, which turns out to be a major success. While looking after the aquarium, Kukuru runs into an elderly man who’d been visiting Gama Gama every summer since it opened. It turns out he had a fantastical, otherworldly experience here and encountered his brother in a vision on his first visit, and curious, he’d come to yearn for another experience. While gazing upon the fish with Kukuru, both she and the elderly man are taken into a vision: he reunites with his brother, and Kukuru spots her family. Kukuru realises that Gama Gama is special because it means something to many people and joins her friends, who are encountering success with their shaved ice stand. We’re now a quarter of the way into The Aquatope on White Sand, a series that combines the workplace detail of Shirobako with the idea of saving an aging entity in Sakura Quest. However, six episodes in, melancholy and magic are much more prevalent than they were in P.A. Works’ previous workplace anime.

The Aquatope on White Sand lacks the same sense of quiet introspection and yearning for direction that The World in Colours presents, or the energetic and upbeat, go-getter attitudes of Shirobako and Sakura Quest had. Instead, the anime exists as a happy medium between the two, combining the supernatural aspects of The World in Colours with the creativity and drive of P.A. Works’ workplace series: Fūka has begun to settle in to life at Gama Gama Aquarium and is applying her own touch on problem solving, proving to be a success in her role as an attendant for the touch pools. Fūka’s natural talent for speaking in front of people and driving excitement makes it such that the children who check out the pools develop an interest in marine life (and in turn, leaves their parents happy), while Tsukimi’s love of cooking means she is able to contribute to finding new ways of breathing life to the dying Gama Gama Aquarium. The solution she reaches, of creating marine-themed shaved ice, is as ingenious as it is effective; it fits with the aquarium theme and at the same time, is inexpensive enough not to demand anything unreasonable from Kukuru. The Aquatope on White Sand thus begins to show the creative spark that P.A. Works’ workplace anime are known for. At the same time, the supernatural takes on a much larger role here than it had previously; by this point in time, it is clear that there is a certain bit of magic about Gama Gama Aquarium, and among the peaceful, surreal environment created by the large fish tanks and the refractive properties of water, visitors experience visions that speak to their heart’s desires. When Fūka visited, she wanted to become lost in a new world. The veterinarian wished most to meet her unborn child. The elderly man greatly misses his brother, and Kukuru herself yearns for nothing more than to meet her family. That these visions are experienced by others clearly indicates that there is a bit of magic at work here, and this acts as a rather clever metaphor for how aquariums and their environment, in providing a glimpse of life in the ocean, also becomes a mirror for what is in one’s heart. Owing to how magic is utilised in The Aquatope on White Sand, it is reasonable to suppose that as Fūka and Kukuru continue to employ their creative (if mundane) methods for saving Gama Gama Aquarium, their efforts will set in motion powerful support from a yet-to-be-seen supernatural force that may be an asset from time to time, suggesting how once people invest the appropriate effort to push something so far, another actor may intervene and provide a bit of help as a reward to those who work hard to realise their dreams. 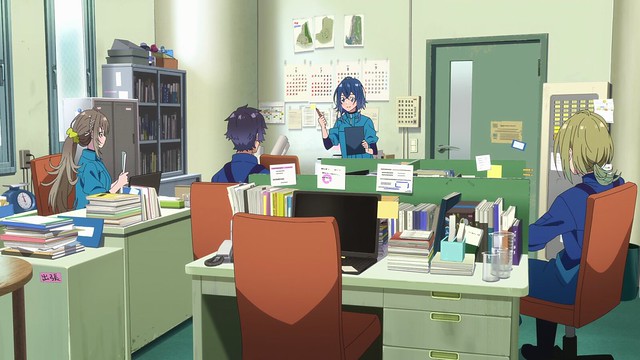 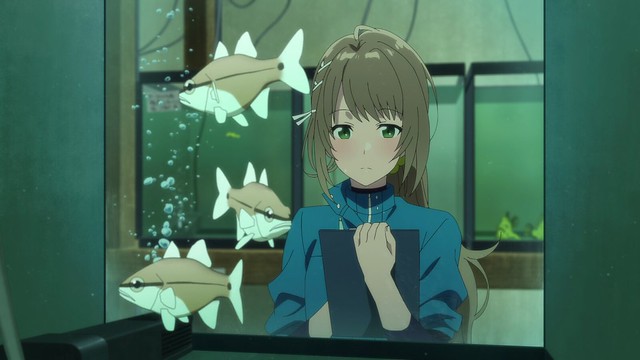 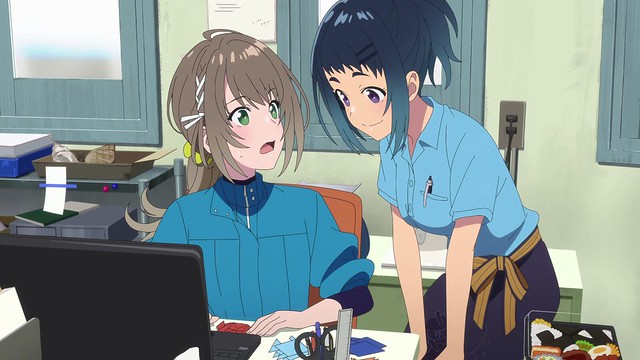 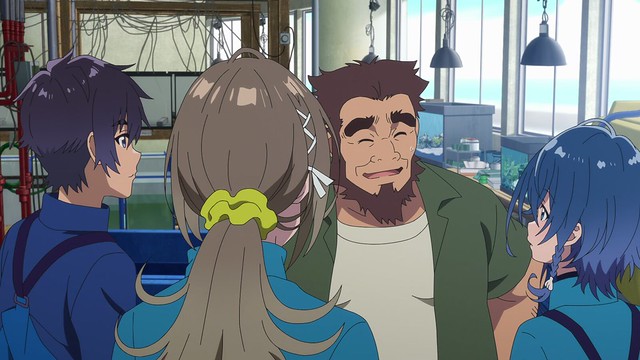 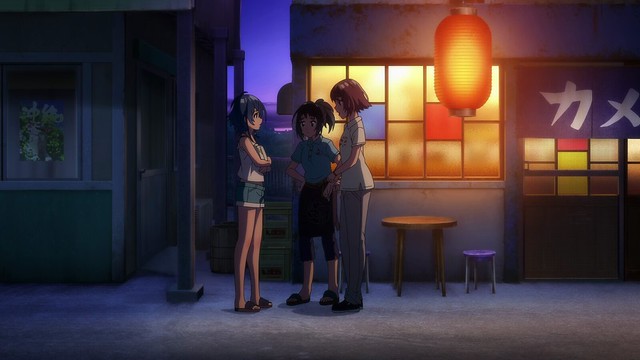 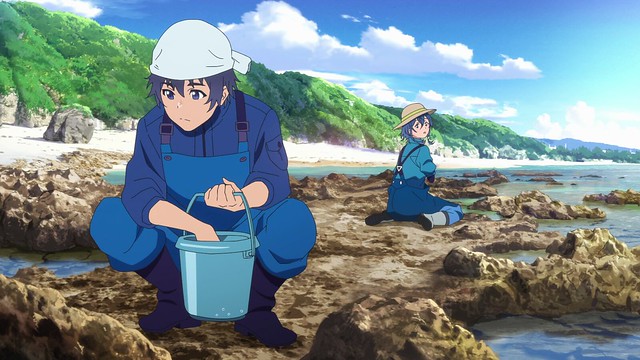 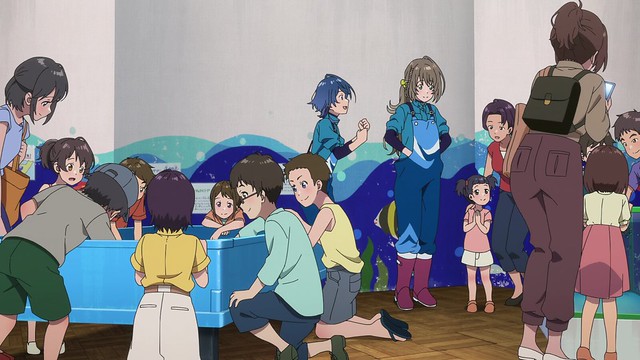 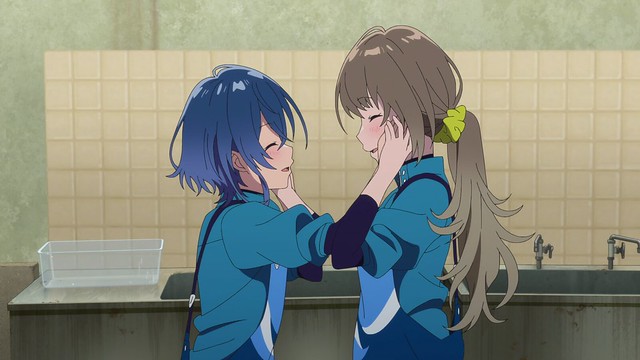 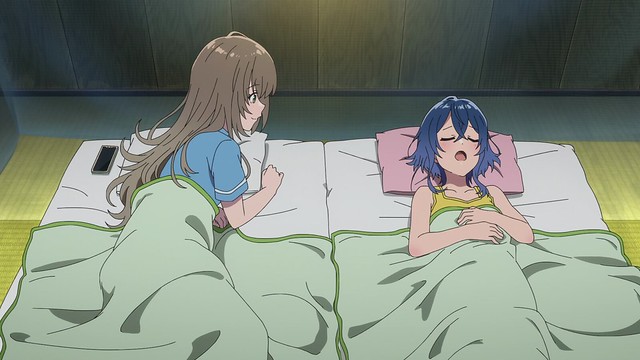 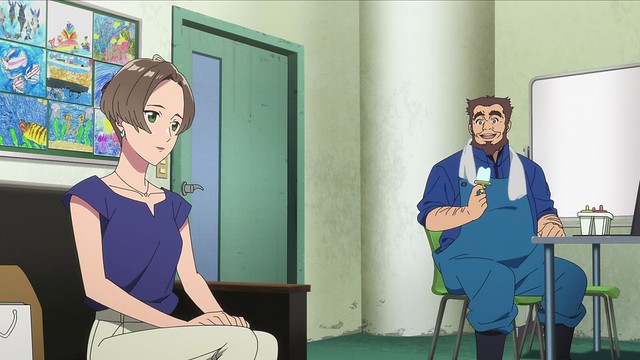 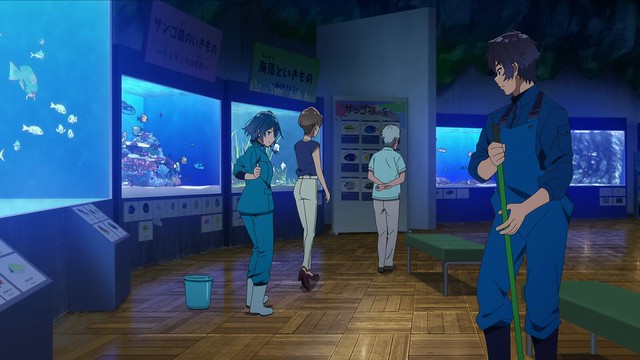 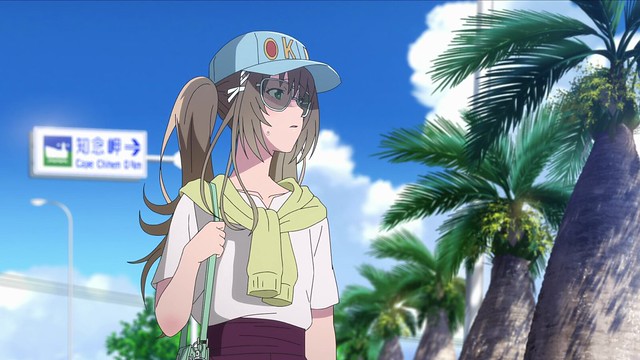 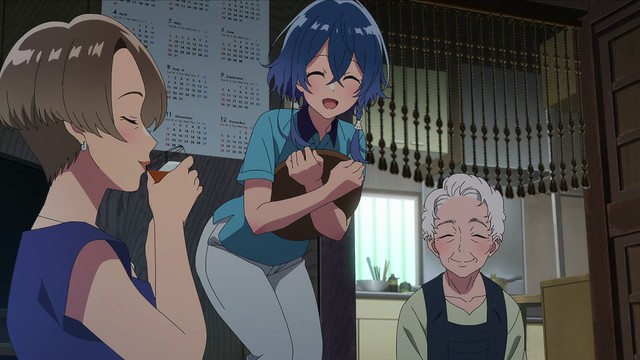 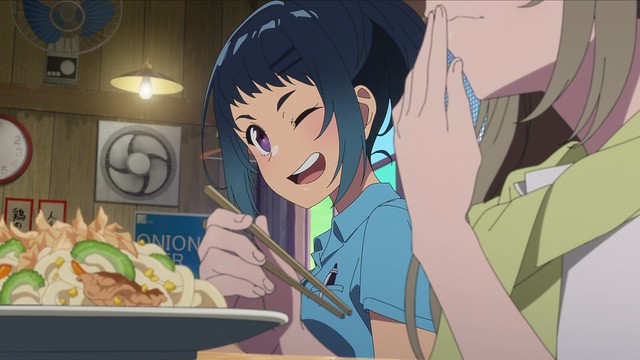 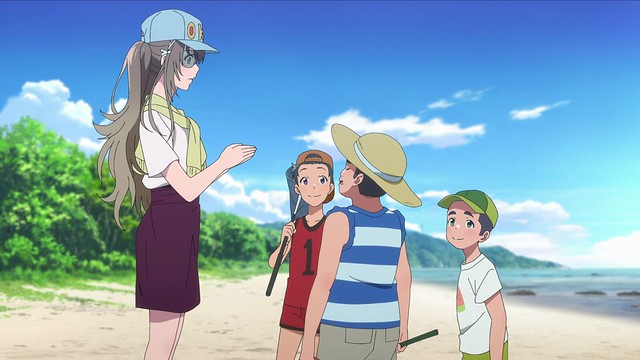 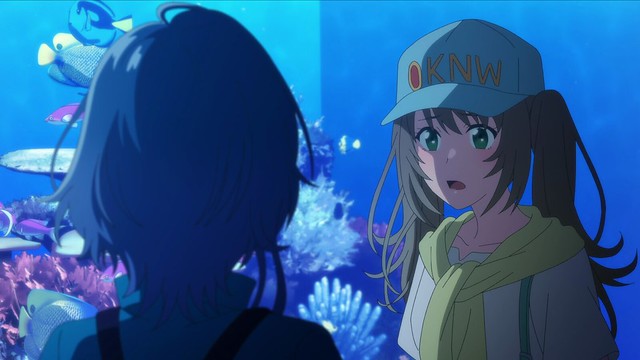 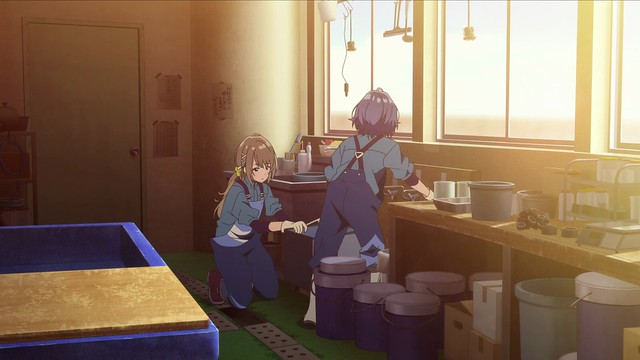 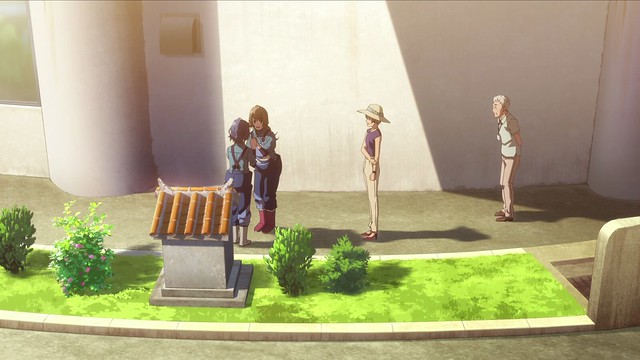 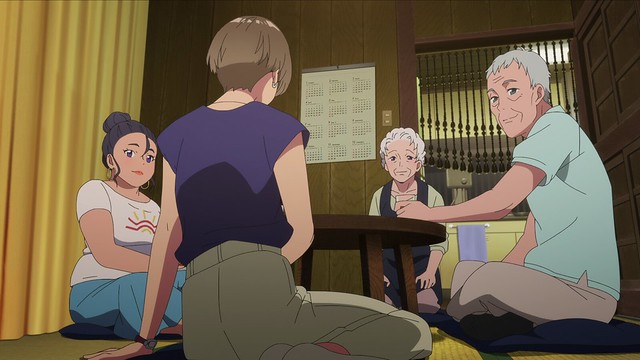 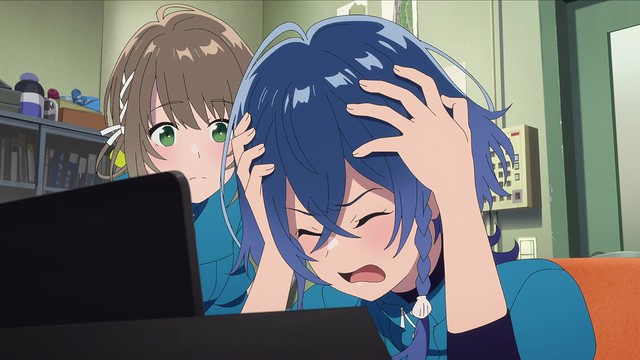 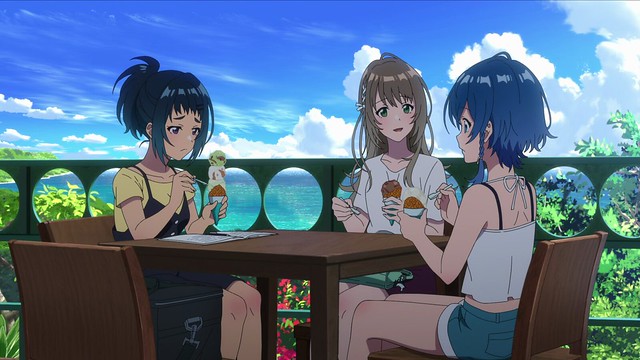 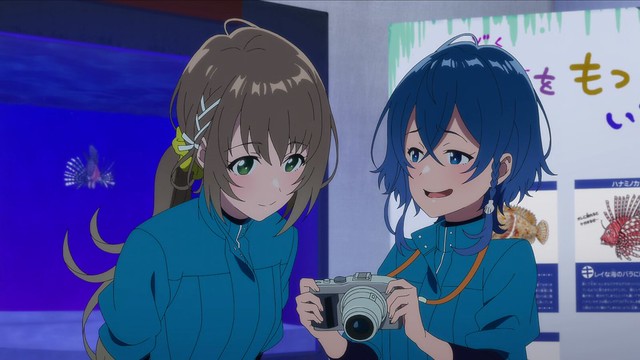 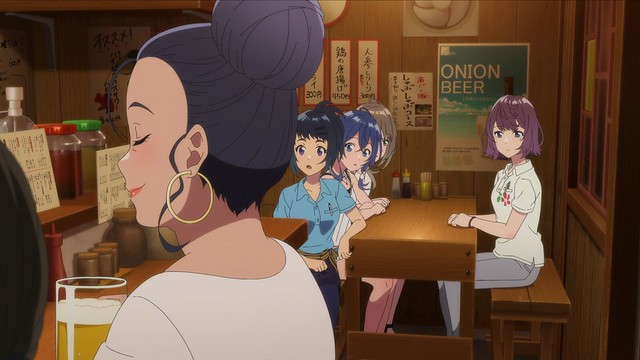 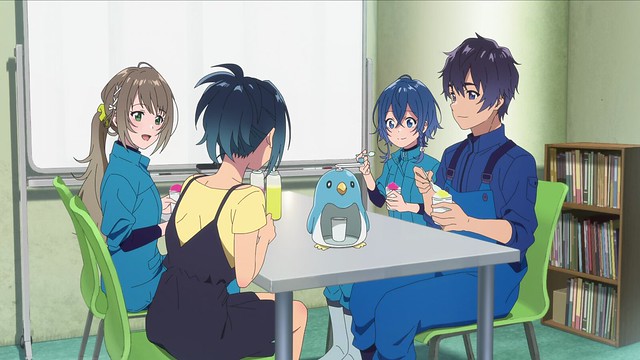 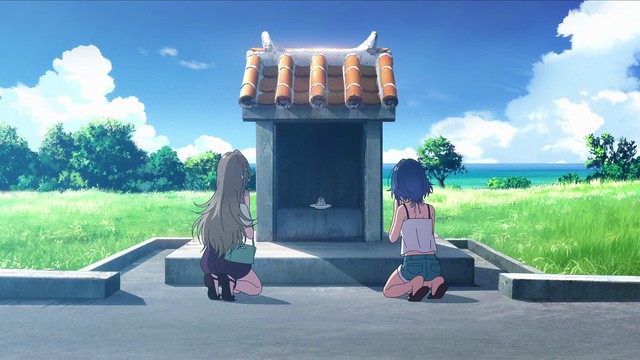 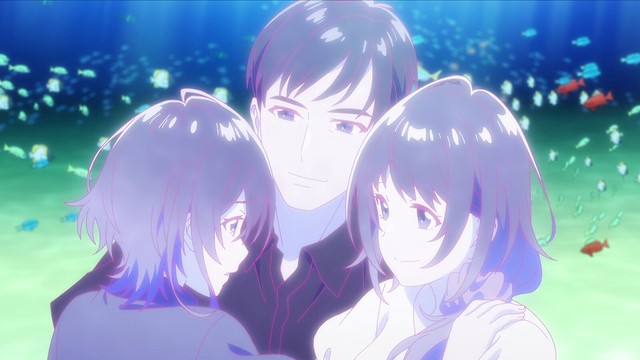 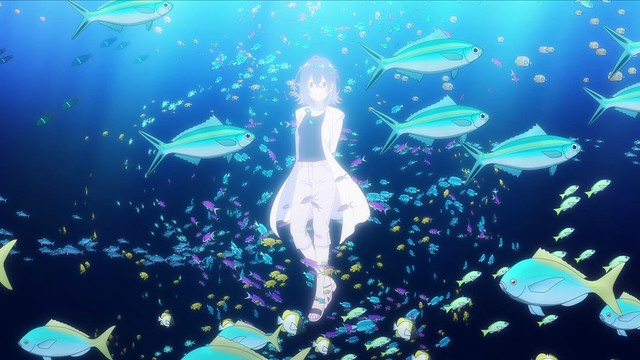 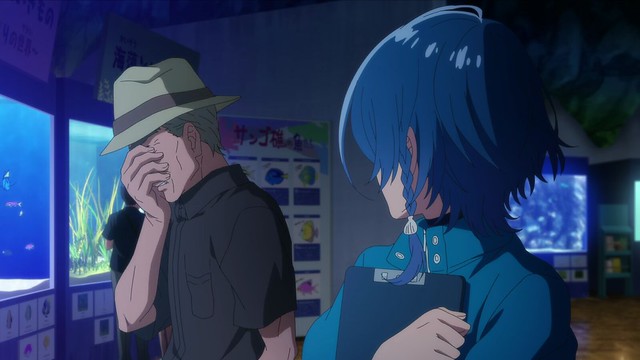 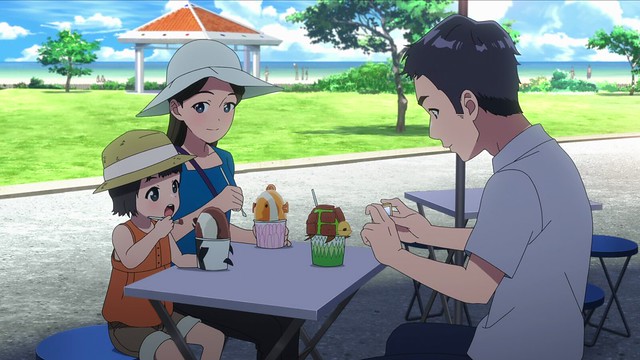 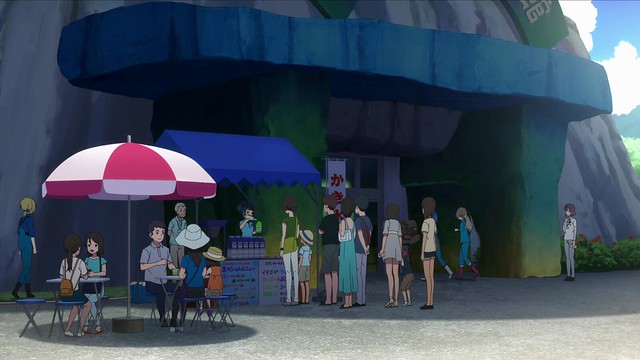 Of course, what I’ve stated about where The Aquatope on White Sand could go is purely speculation, and with the remaining three quarters of the anime still on the table, P.A. Works has plenty of room to explore and impress. One thing about P.A. Works that I’ve enjoyed, which The Aquatope on White Sand employs, is the fact that the series is paced such that lingering questions of practicality are eliminated from the get-go. Much as how Tari Tari had Konatsu and Sawa singing with a full choir in the second episode to show that they could put a group together if they felt so inclined, The Aquatope on White Sand has Fūka’s mother appear early on to clarify that Fūka’s continued stay in Okinawa is one with reluctant approval (and a hard time limit). Rather than leaving things to linger for drama’s sake, both Tari Tari and The Aquatope on White Sand cut straight to the chase in dealing with the proverbial elephant in the room, allowing the series to focus on what is central to their story. For this reason, I’ve always enjoyed P.A. Works’ coming-of-age and workplace stories – they address problems directly early on so that the real hurdles are given enough time to be fleshed out and solved. With this in mind, The Aquatope on White Sand has proven to be very solid, and this time around, it is clear that P.A. Works has applied lessons from Shirobako, Sakura Quest and The World in Colours to their latest work, combining the creativity and resolve of those with a job to do together with the idea of introspection and self-discovery, aided with a little bit of magic. Six episodes into The Aquatope on White Sand, this anime has done a superb job of the workplace side of things, and as the anime is hinting at the fact that the visions that Fūka, the veterinarian, Kukuru and an elderly vistor have are more than just creative metaphors; they’re real enough to the characters, so there is now a very tangible expectation that P.A. Works will give this particular element sufficient exposition and detail, much as they had previously done with The World in Colours.

7 responses to “The Aquatope on White Sand: Review and Impressions After Six”