DOOM Eternal: The T-Shaped Slayer and A Duel Between Titans At The Finale

“…and you will be their savior, your strength will be their shield and your will… their sword. You remain…unbroken…for your fight…is eternal.” –King Novik

With the way to Urdak open, the Doom Slayer slaughters his way to the Khan Maykr: here in Urdak, the Khan Maykr is preparing a ceremony to bring the Icon of Sin under her control. The Doom Slayer interrupts the ceremony and prevents the Khan Maykr from activating the Icon of Sin by stabbing the mortal heart of the Argenta. This causes the Icon of Sin thus sets off on a rampage towards Earth, and with the Khan Kaykr’s pact with Hell broken, dæmons begin invading Urdak. In order to reach Earth, the Doom Slayer reconfigures a Celestial Portal. destroys the Khan Maykr before following the Icon of Sin. After fighting through an abandoned city, the Doom Slayer confronts the Icon of Sin, destroying its armour and causing it to flee into a different area. Here, the Doom Slayer is able to finally bring down the Icon of Sin, and plunges the Crucible’s blade into its exposed brain, killing it. In the aftermath, King Novik reconsiders his words to the Doom Slayer, indicating that the Doom Slayer has been reinstated and will be counted upon should the need arise. This brings my twenty two and a half hour journey through DOOM Eternal to a close; having now beaten the whole of DOOM Eternal, I can say that I have a sufficient measure of this sequel to 2016’s DOOM to make a verdict about DOOM Eternal. Simply put, DOOM Eternal is a worthy successor to DOOM, being bigger and bolder in every way. The changes to the core combat system is a direct improvement, adding a new dimension to the way DOOM Eternal plays, and the nuances players must keep up with constantly pushes them to get creative and adapt whenever the going gets tough. The end result of this is that combat becomes more involved, and split-second decisions must be made more often. If DOOM had meant to suggest to players that they needed to play in a highly mobile and aggressive means by remaining on the move at all times to survive, then DOOM Eternal is reminding players that they must be mindful of all the tools they have at their disposal in order to survive. DOOM previously allowed players to plow through entire levels with naught more than the heavy cannon and plasma rifle, but the variety of dæmons in DOOM Eternal means this is no longer possible. Players must triage, prioritise and maintain calm nerves in every firefight in order to survive, and it becomes clear that this additional dimensionality is a logical evolution of what DOOM had established.

In this way, DOOM Eternal becomes the perfect sequel to DOOM: familiar elements make a return, but changes to the mechanics means that players end up with a new experience, one that builds upon what they’d previously learnt and mastered in DOOM. There is more to think about now, and more options available to players. Not every path is viable: using just the plasma rifle or heavy cannon against a Flameborne Baron, for instance, simply results in a great deal of ammunition expenditure, but combining the ice bomb, grenade and Blood Punch in conjunction with the heavy cannon and plasma rifle makes a difficult, lengthy fight trivially easy against an intimidating foe, allowing one to deal with them without spending precious time on weapon switching, especially when there are lesser dæmons also filling the air with deadly plasma fire and flame. DOOM Eternal thus addresses the problem of Maslow’s hammer in a highly elegant manner: in most contemporary video games, players are limited in the number of weapons they can carry, and as such, to maximise combat efficiency at a variety of ranges, players often stick to assault rifles, which balance rate of fire with accuracy at range, and in games like Battlefield or Call of Duty, it becomes possible to complete the entire campaign with the starting assault rifle, plus whatever pickups are needed to advance certain parts of the game (like a marksman rifle or anti-armour weapon). However, this can create complacency among players, who stick to one setup during an entire game. When games allowed players to carry an entire arsenal of weapons, weapons were often crafted to fit very specific roles. Half-Life and Half-Life 2, for instance, required players to constantly switch weapons to deal with threat of different types and at different ranges. When Halo: Combat Evolved released, it revolutionised the ways players played. Carrying two weapons at a time create a new problem for players to overcome, and deciding which weapons to pick became critical. This worked well for Halo because the sci-fi setting meant weapons could be specialised for different roles. However, since Call of Duty‘s dominance, players have grown accustomed to simply optimising their setups. DOOM Eternal forces players out of this as a wake-up call, reminding them that weapons are in a game for a reason, and that to be successful, one must utilise all of the tools at their disposal in order to be successful. 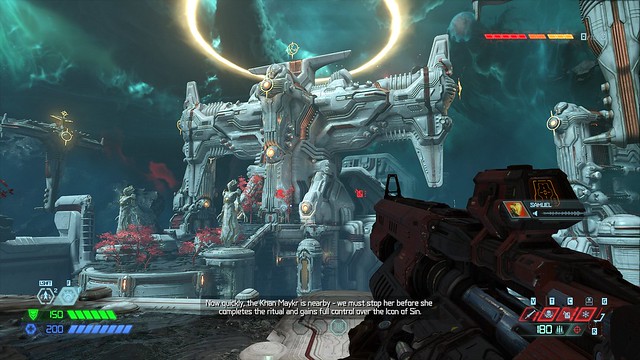 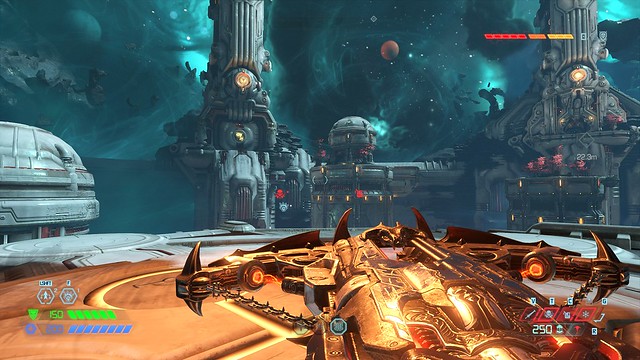 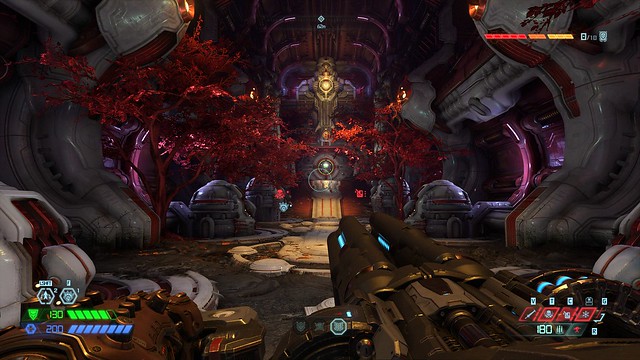 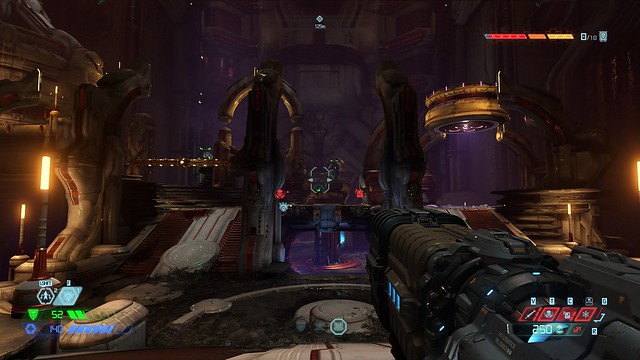 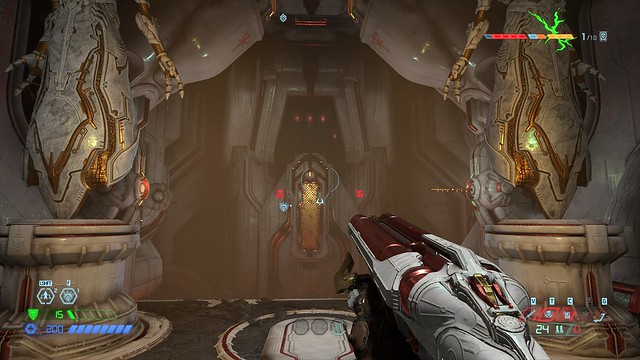 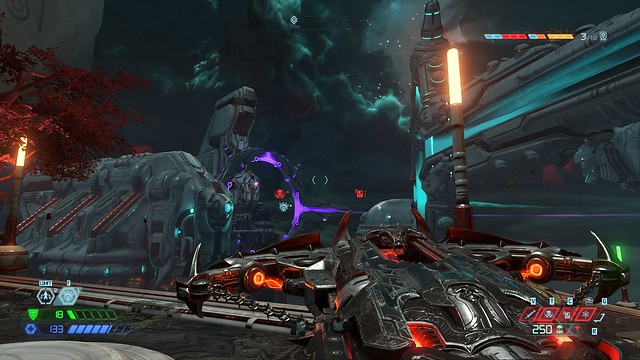 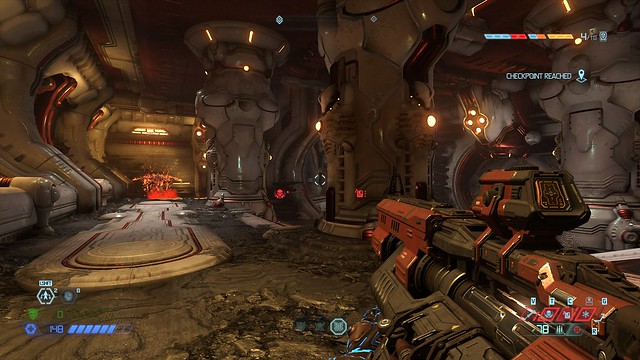 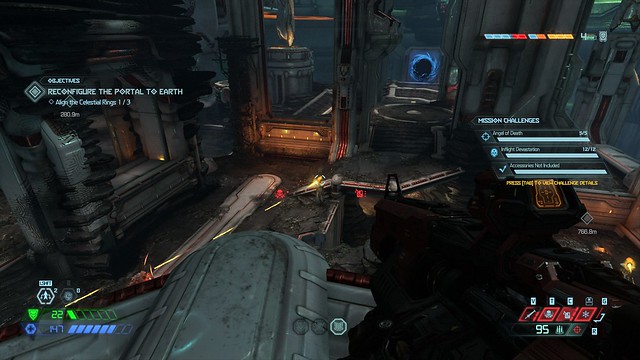 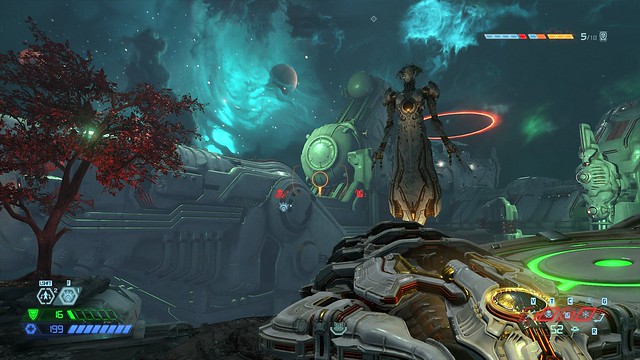 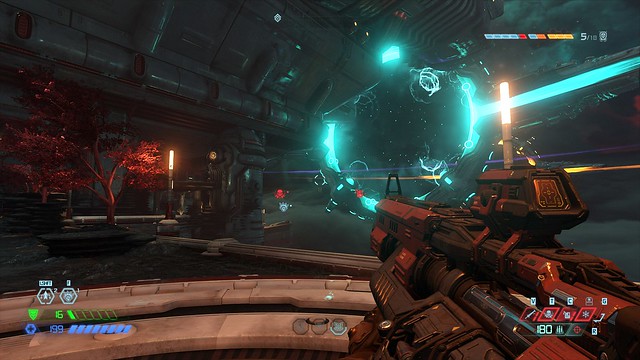 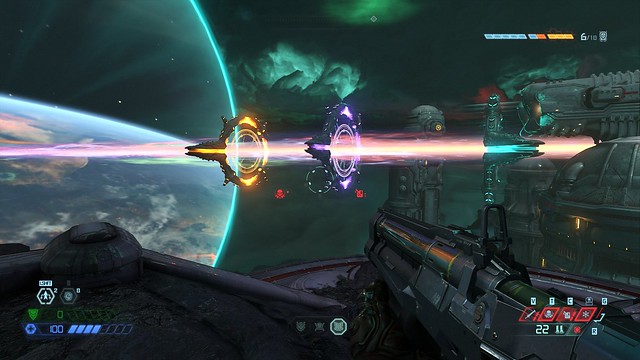 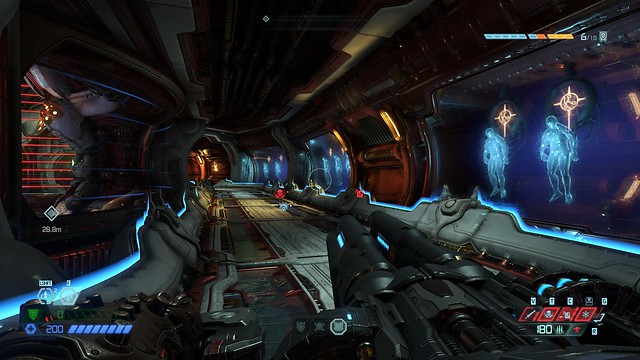 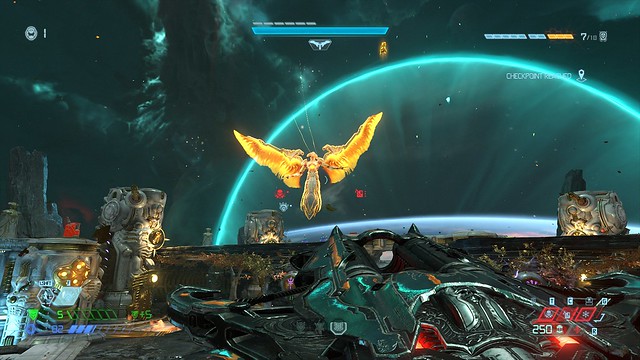 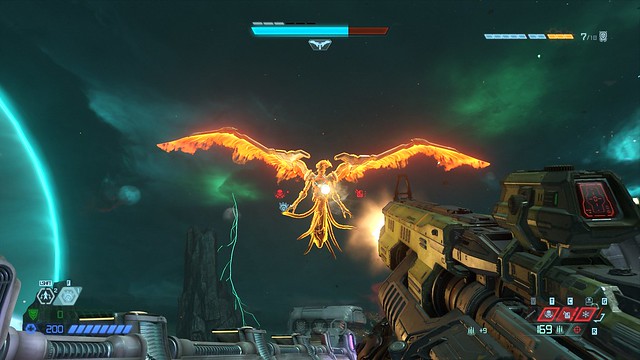 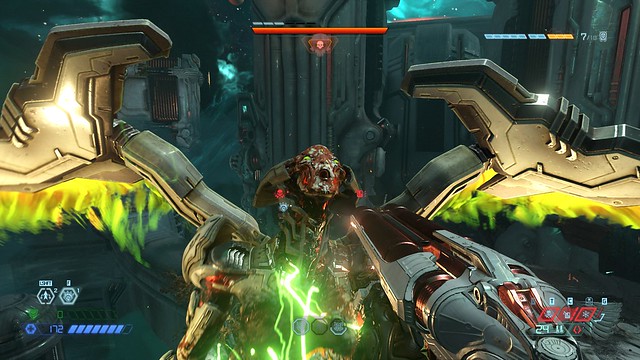 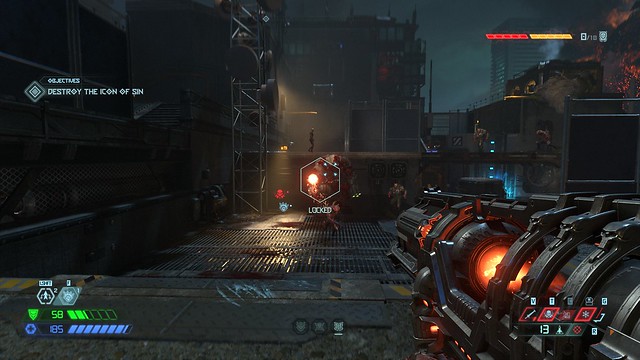 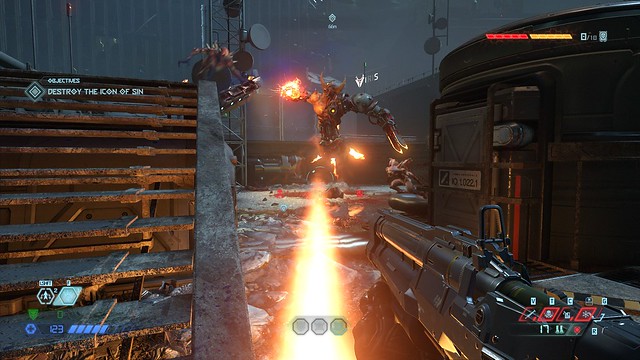 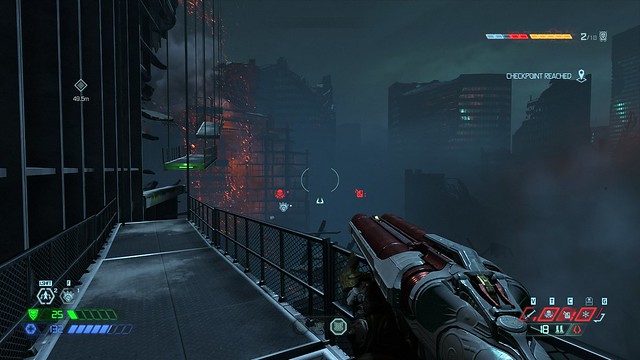 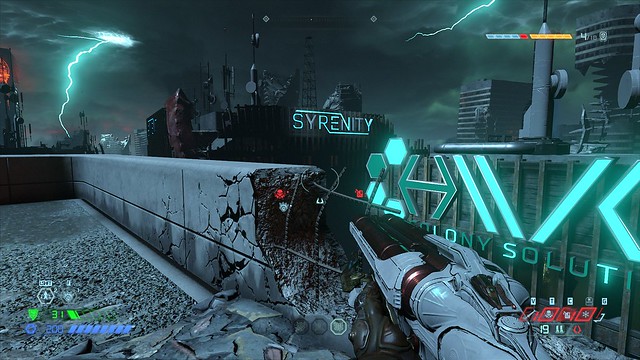 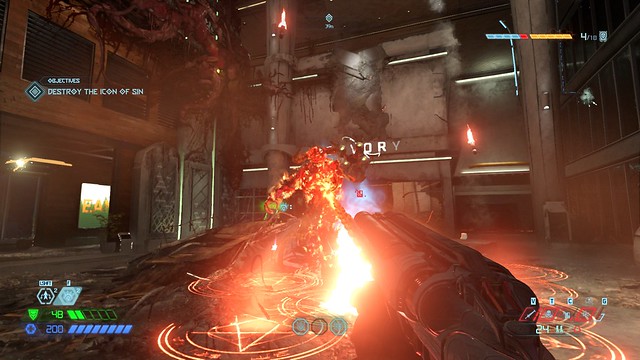 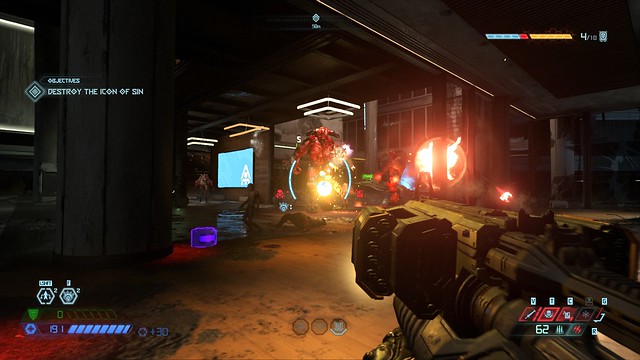 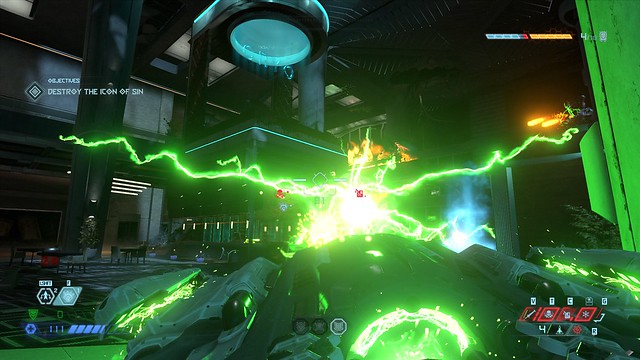 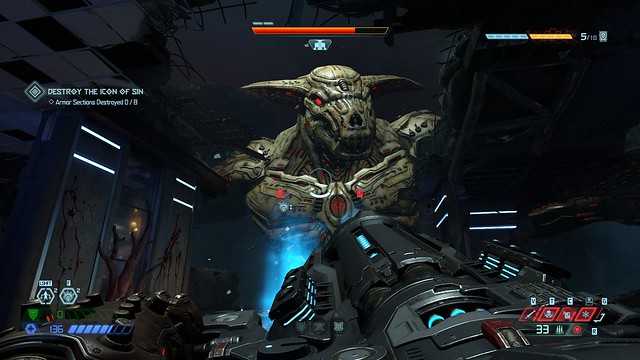 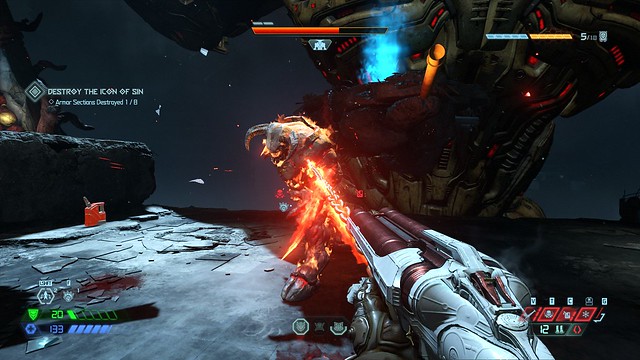 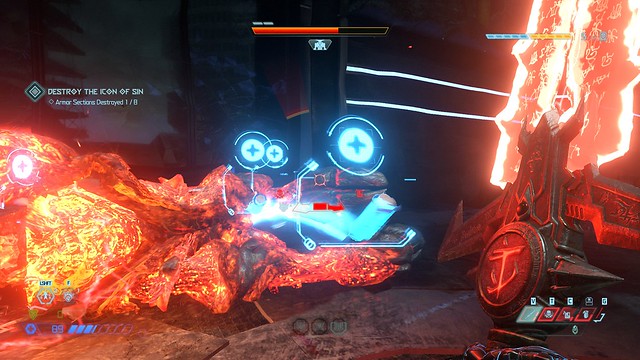 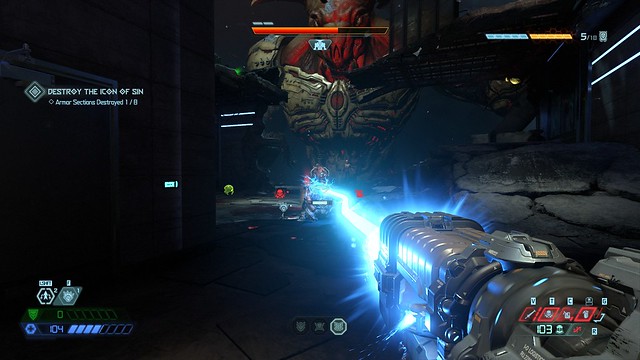 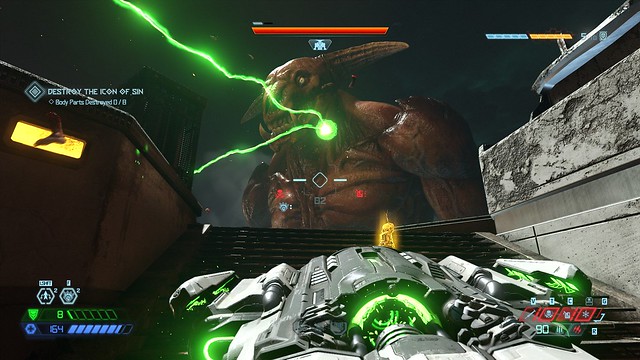 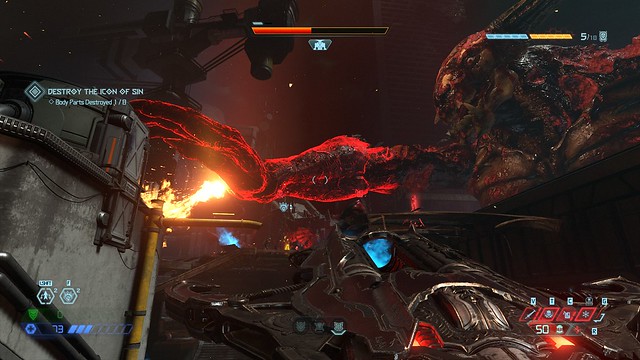 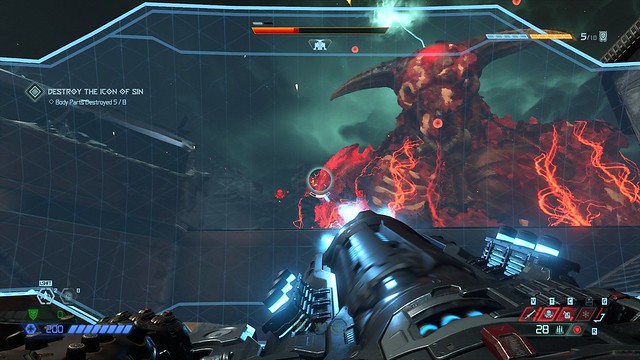 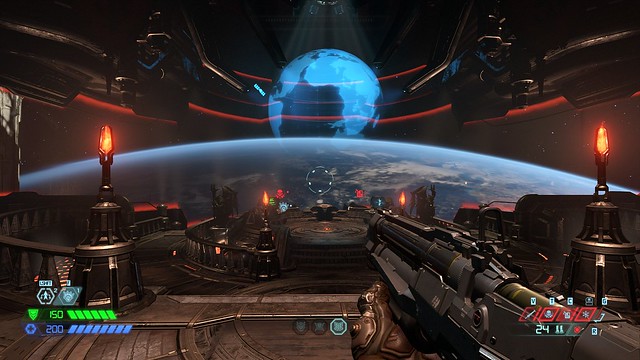 The approach DOOM Eternal takes towards encouraging players to make full use of their arsenal and equipment is a rather clever reference to real life: while it is often the case that people specialise towards one role in reality, there is considerable desirability in possessing what is known as a T-shaped skillset. This describes individuals who have competence in a broad range of topics (the horizontal stroke in the character T) and have also simultaneously cultivated depth in one area to be very effective (the vertical stroke). Individuals with T-shaped skills can collaborate and contribute in a range of disciplines, while at the same time, offer expertise in one specific area. In DOOM Eternal, players necessarily must understand what every tool available does: if one were to go purely through the game with the super shotgun, they’d find themselves short of ammunition very quickly. However, understanding that the super shotgun can be combined with ice bombs, the meathook and ballista means being able to put together impromptu solutions for less-than-ideal situations. This is where DOOM Eternal‘s genius is: players are compelled to experiment and keep on their toes because one can never be too sure what the next combat situation is going to be. While one might have a preference for certain weapons, success is found by developing an understanding of the full toolset and effectively making use of it. Real life similarly is conducive for T-shaped individuals: having a good breadth and death of knowledge means being able to apply one’s expertise to help in other scenarios, as well as being able to draw on a wide range of problem-solving techniques to solve a particularly difficult challenge in one’s area. DOOM Eternal offers no room for sticking to one weapon type or one set of strategies: the game is fluid, and the tips offered work best in a situation where everything is contained. The moment one is dropped into an arena, it is no longer viable to play an optimal way. In this aspect, DOOM Eternal is masterfully done, since game design can also send a particular message to players. It is the case that one is only really successful when they learn to make use of all the tools and tricks available to them. DOOM Eternal’s combat mechanics remind players that they should get comfortable with being uncomfortable, a state which encourages people to learn and try new things in an eternal quest to improve.