4 Comments Posted by infinitezenith on September 10, 2021

“I did think this through. You can’t be a friendly neighborhood Spider-Man if there’s no neighborhood. Okay, that didn’t make sense but you know what I’m trying to say.” –Spider-Man, Avengers: Infinity War

In Tokyo’s Ueno district, Yui, Saki and Kotoha, three grade-schoolers who count themselves the “Colours” and are devoted to defending the peace in their neighbourhood. Their everyday adventures occasionally cause them to run afoul of the local police officer, Saitō, but overall, the girls’ adventures are harmless fun: the Colours look after a panda-coloured cat, play hide-and-seek, help Saki’s mother sell bananas, visit the zoo and museum, attempt to collect tickets from local shoppers and even organise a Halloween event to gather candy. Mitsuboshi Colours is uncommon among the anime I’ve watched, in that it is reminiscent of some of the children’s shows I used to watch; these shows didn’t always have a specific Aesop to tell, and instead, simply portrays a series of events that characters experience. These events might be unremarkable, but there is always humour about them, as each of Yui, Saki and Kotoha find themselves in situations that are unexpected, contrary to expectations. In spite of this, the Colours always manage to take things in stride, and always make new discoveries around a familiar neighbourhood. In this way, while the Colours may not always keep the peace, through the world from Yui, Saki and Kotoha’s eyes, viewers are able to see things from a new perspective, one that is filled with curiosity and naïveté: unaffected by the harsh realities of adulthood, or the challenges that accompany adolesence, the Colours are aptly named, as their world is remarkably colourful.

The main draw about Mitsuboshi Colours, then, is the fact that the anime is able to so aptly portray the idea of childhood innoence and the fact that children possess a very unique world-view. Whereas adults are guided by prior experience, logic and reason, children are inquisitive and willing to explore. Consequently, when it comes to decision-making, Yui, Kotoha and Saki have a tendency to pick choices that seem foolish or irrational to adults, invariably creating situations that one cannot help but smile at. Indeed, children often pick up on things that adults miss, and Mitsuboshi Colours never fails to capitalise on this to drive the show’s humour. However, it is here that Mitsuboshi Colours strikes a fine balance: humour can occasionally get out of hand, and someone’s feelings inevitably get hurt. This is not the case in Mitsuboshi Colours, and it became easy to get behind Yui, Saki and Kotoha’s schemes. At worst, they are an inconvenience for others (such as when they attempt to find out why certain stretches of the shōtengai shopping district are closed and end up tracking paint everywhere, or bothering shops by asking if they sell eyeballs after imagining this is the solution to a puzzle), but at their best, the misadventures can also be uplifting: the Colours brighten up visitors to a local park when they play a zombie game, and later, while selling strawberries to people partaking in hanami so they can earn some cash for cakes, they end up brightening up a job-seeker’s day (even though it costs him his last five hundred yen). Altogether, this is the joy in Mitsuboshi Colours: the Colours are doubtlessly mischievous, but they’re also aware of those around them. While they might be rambunctious enough to push a few buttons, they know which lines not to cross. The end result of this is that Mitsuboshi Colours creates an energetic, yet gental, source of comedy through the misadventures Yui, Saki and Kotoha have. 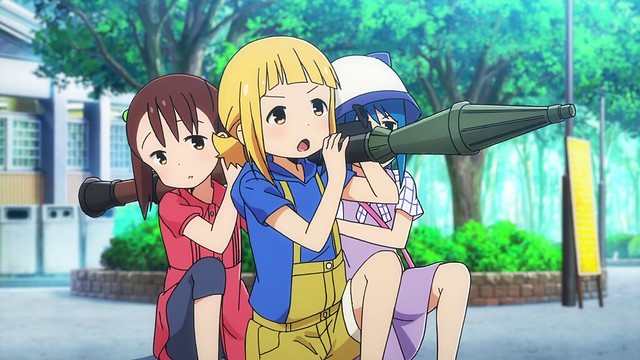 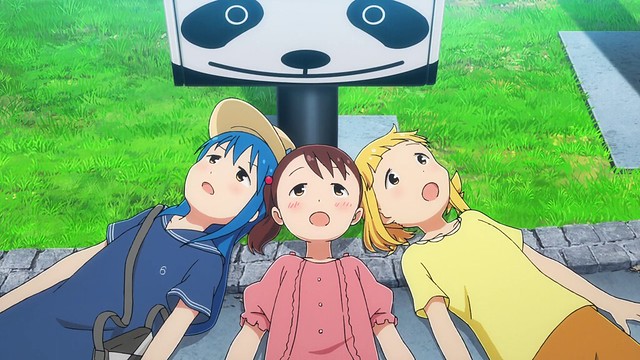 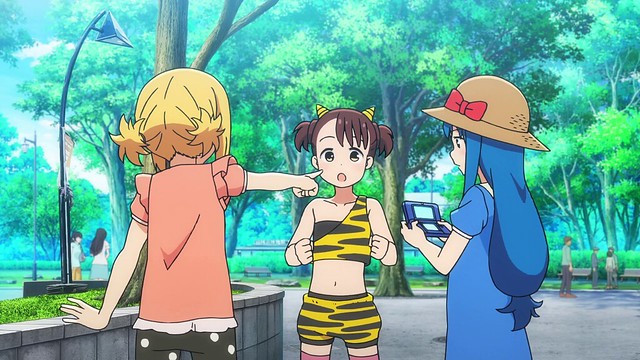 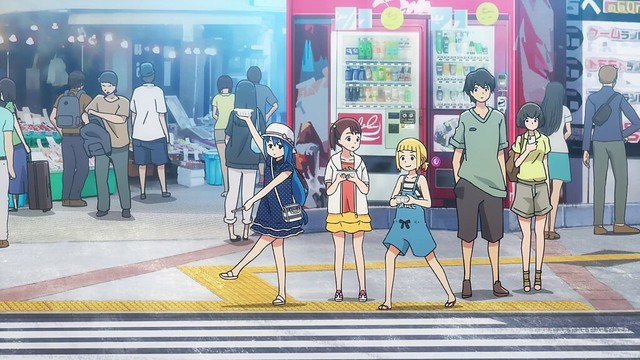 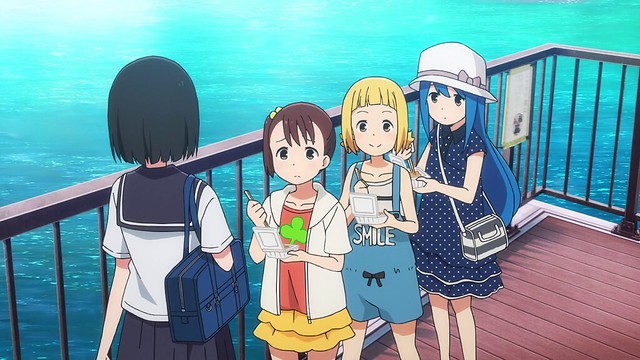 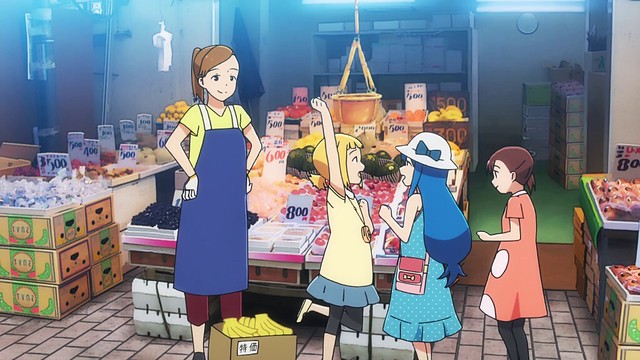 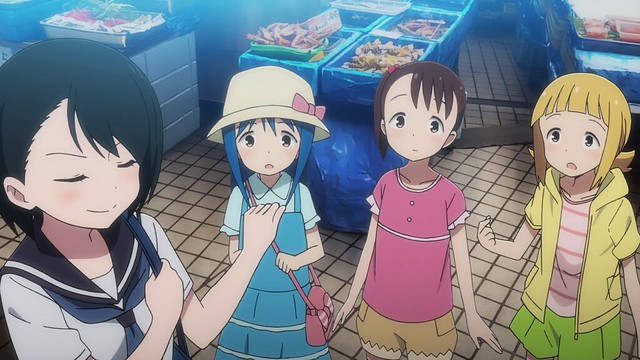 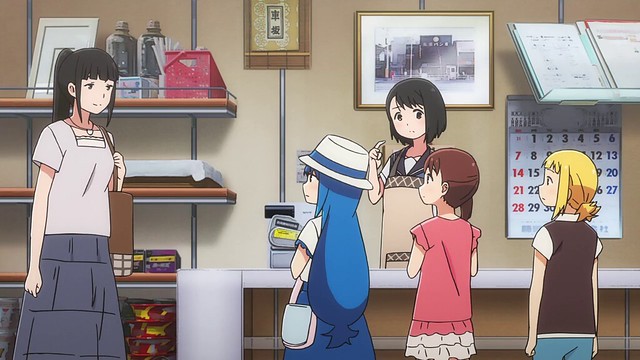 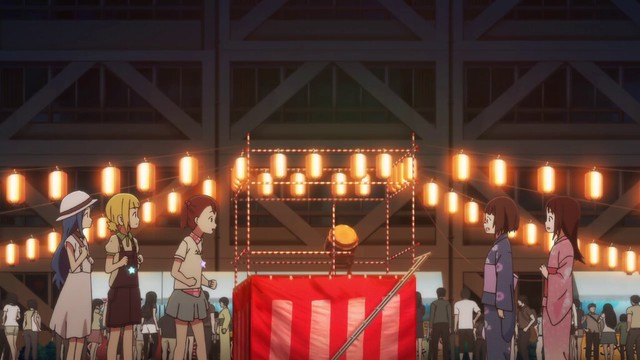 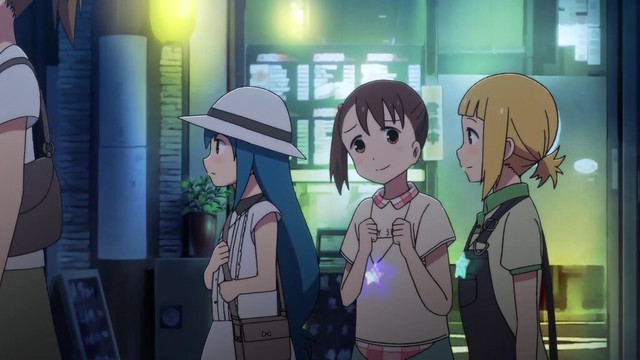 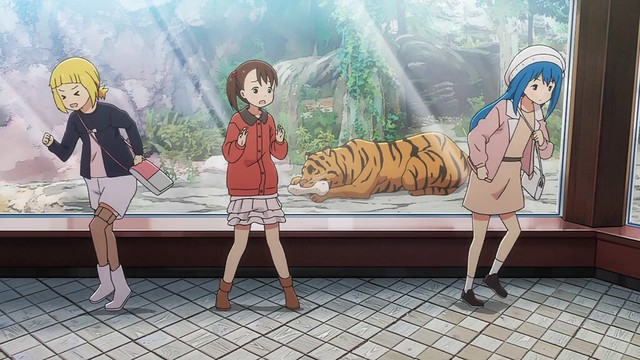 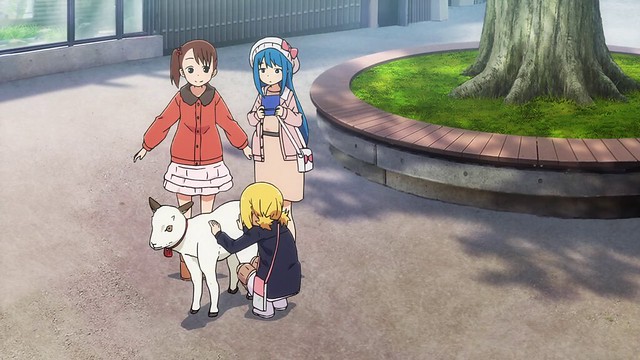 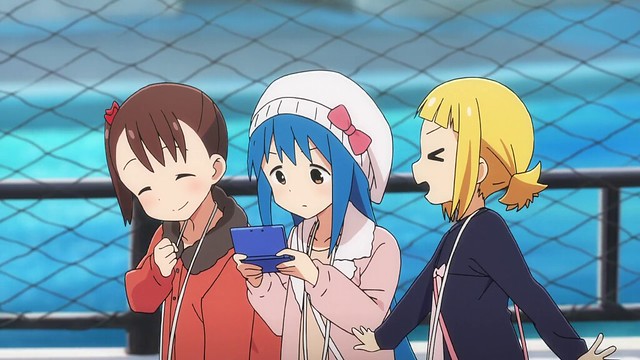 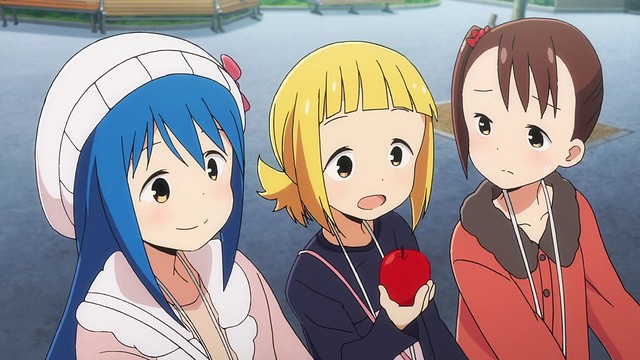 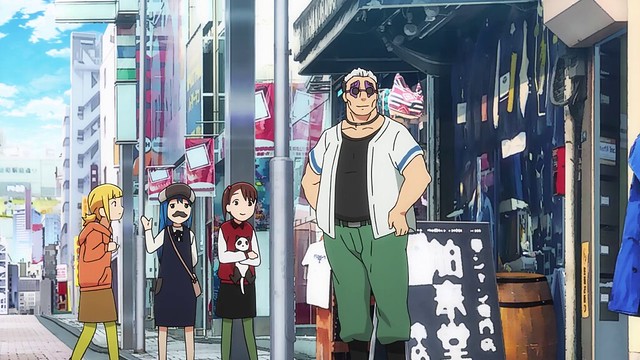 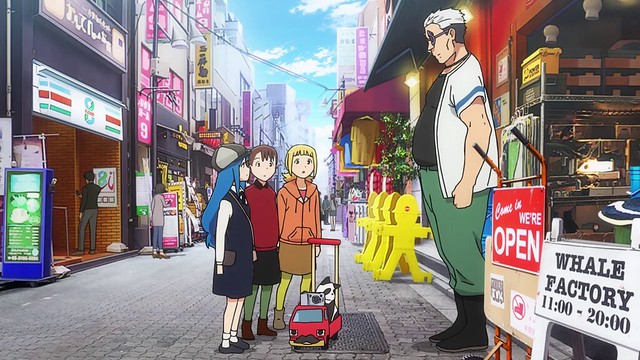 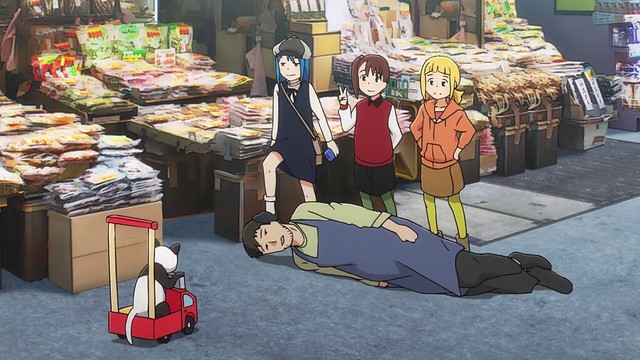 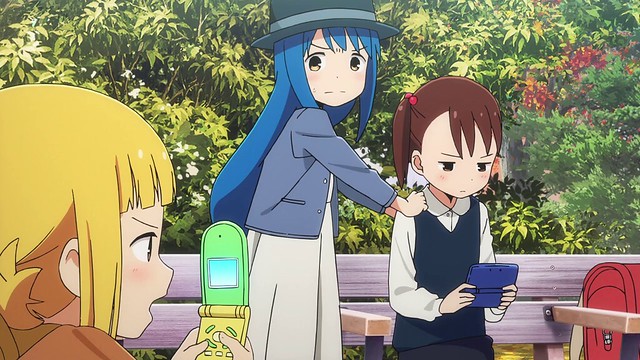 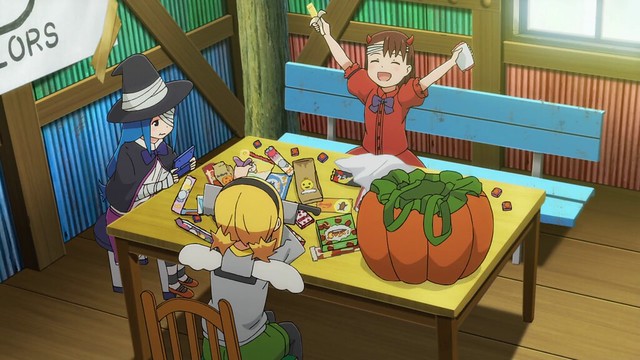 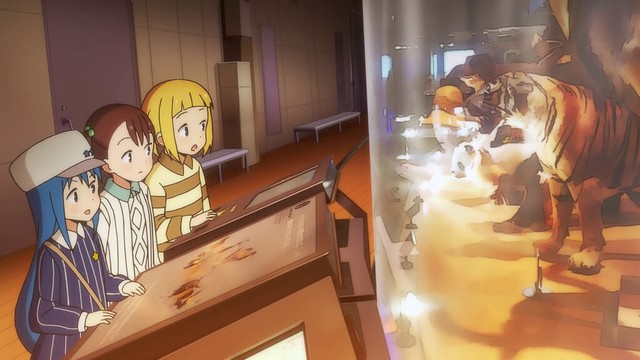 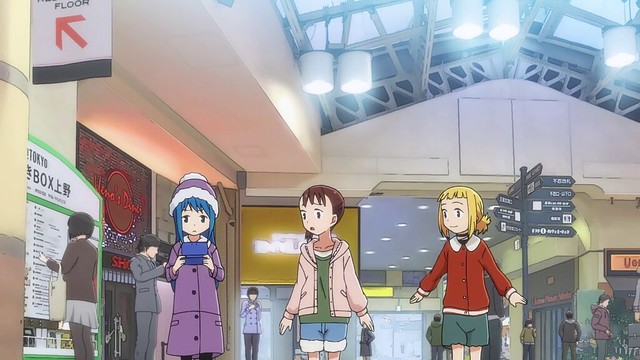 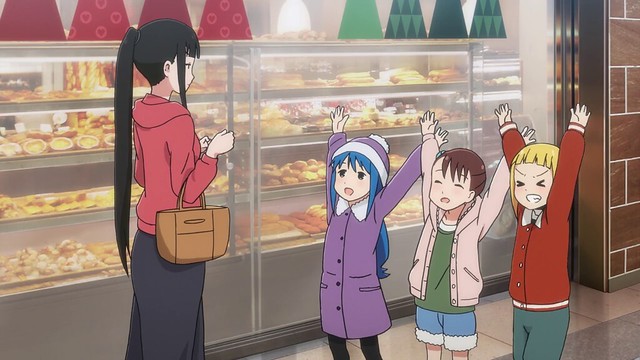 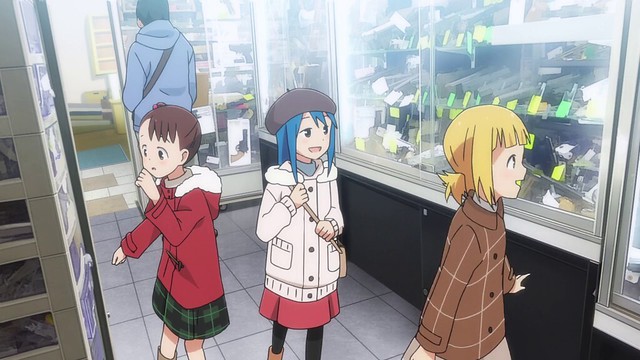 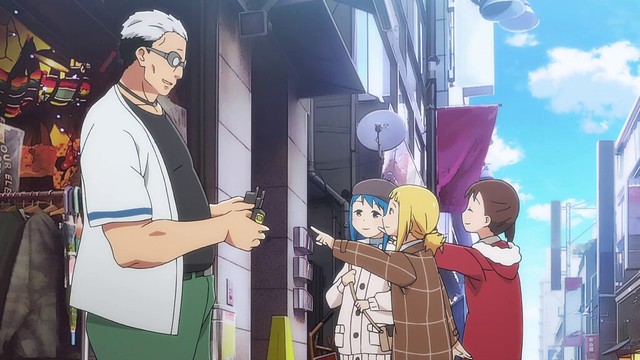 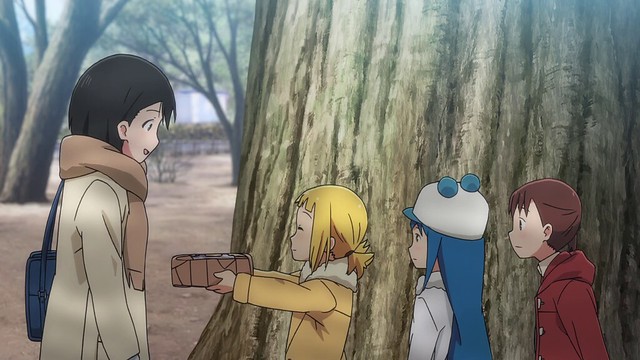 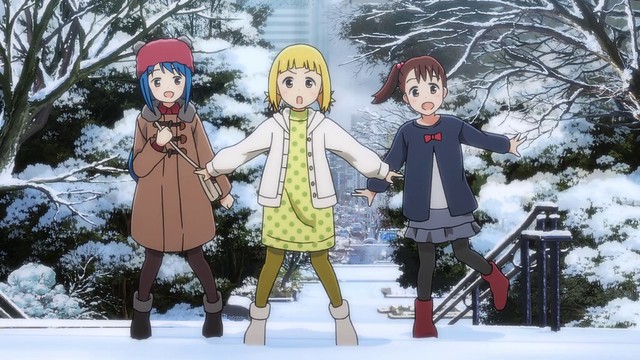 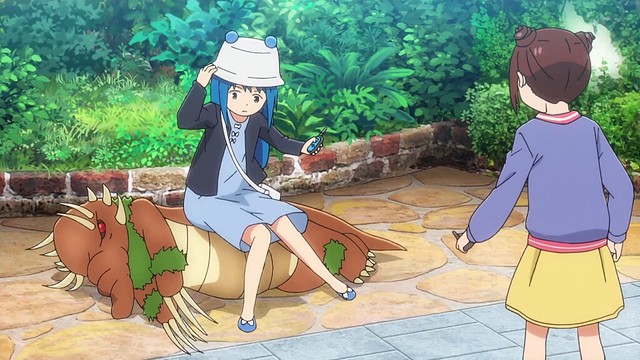 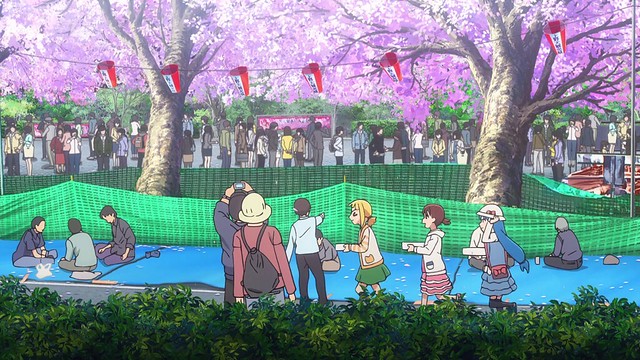 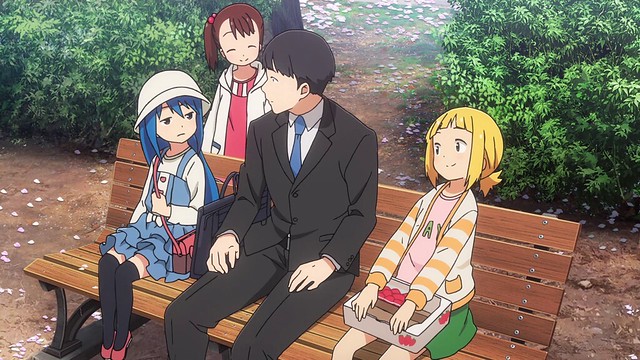 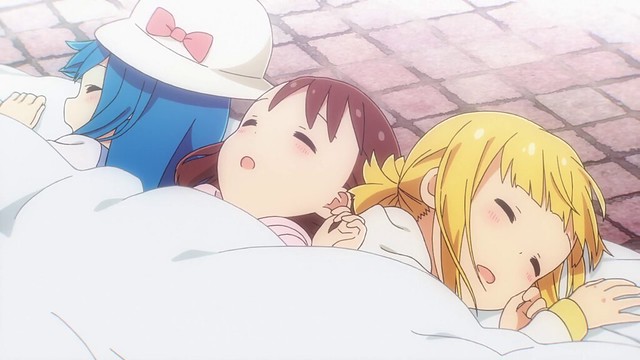 Altogether, Mitsuboshi Colours is a solid series, and in a curious turn of events, the original manga was created by Katsuwo, who also wrote Hitori Bocchi no Marumaru Seikatsu. Both series portray children and youth in a plausible manner, placing them in situations that evokes a sense of pathos and pulls on the heart strings, while at the same time, presenting the characters as people worth rooting for. The end result is that every episode of Mitsuboshi Colours is worth watching, similarly to how Hitori Bocchi no Marumaru Seikatsu was similarly compelling. However, whereas Hitori Bocchi no Marumaru Seikatsu was focused on Bocchi’s efforts to make friends, Mitsuboshi Colours is more about how the size and variety in Ueno district gives Yui, Kotoha and Saki no shortage of places to explore, and no shortage of ideas to pursue. The local park contains the trees to be destroyed for creating hay fever, but those same trees become a potential landmark when the girls decide to put a time capsule together to remember their friendship. When their panda-coloured cat decides to go for a stroll, the girls follow him, thinking his destination to be cool beyond words. Their tour leads them back to their clubhouse. In this way, Mitsuboshi Colours suggests to viewers that even in a familiar setting, there’s enough going on so that every day is different, and consequently, there is something new to look forwards to all the time, even when the scenery and sights appear to, on first glance, be unchanging. While people are constantly looking to change things up, there is also a certain comfort in familiar sights; I’ve long held that one isn’t really ready for adventure until they’ve come to fully appreciate everything their home as to offer, and as Mitsuboshi Colours indicates, more often than not, home can be full of pleasant, unexpected surprises just waiting to be discovered.