Higurashi SOTSU: Whole-Series Review and Reflection, Remarks on the Curtainfall

3 Comments Posted by infinitezenith on October 6, 2021

“This is what happens when an unstoppable force meets an immovable object. You truly are incorruptible, aren’t you? You won’t kill me out of some misplaced sense of self-righteousness. And I won’t kill you because you’re just too much fun. I think you and I are destined to do this forever.” –The Joker, Dark Night

After gaining unearthly powers from Eua, Satoko’s humanity begins eroding as she enters countless loops in a bid to persuade Rika to back down from her dreams: the dæmonic energy eventually expels Satoko’s original spirit and takes over, leading Satoko to commit atrocities beyond description. However, Rika soon works out that Satoko is the one behind her return to suffering, and the two break out in open hostilities. Meanwhile, Hanyū is forced to watch Rika’s suffering, but in spite of what happens, declares that miracles will come to those who make it happen. When Satoko and Rika’s fight causes them to relinquish the Onigari-no-ryūou, an ancient blade forged to kill dæmons, the sword passes over to Hanyū, who uses it to defeat Eua. In the real world, Satoko and Rika continue their fist-fight until they are exhausted, upon which they return to their older selves. Keiichi, Rena and Mion find the pair in the river and drive them back, remarking that friends aren’t constrained by the idea of being together, that a part of friendship is the ability to let go and know that they can still get in touch with and count on the support from the other when needed. In 1987, Rika prepares to attend St. Lucia while Satoko chooses to remain behind in Hinamizawa, and growing weary of the peaceful life in Hinamizawa that Satoko had yearned for, the dæmonic form returns Satoko’s spirit to her body and departs, while Hanyū watches happily in the knowledge that a new peace is reached. This is Higurashi SOTSU, sequel to GOU and a series that has inevitably created among viewers an overwhelmingly negative impression: after all, KAI had ended on a very definitive and solid note, with Rika breaking free of her curse and finding happiness after overcoming all odds. Thus, when GOU finished, expectations were that SOTSU would properly explain what had happened in GOU. While SOTSU does roll back the curtain on why the events of GOU happened, the underlying conflict SOTSU presented was contrary to expectations, the result of Satoko’s inability to face the future and accepting a curse that sapped her of her humanity. In this way, SOTSU indicates that the events in GOU were the consequence of humans being made mere playthings for deities; although having the deities play a larger role (in particular, Hanyū is able to finally have a tangible impact on things, whereas before, she was a passive observer), this undermines what the original Higurashi and KAI had sought to convey.

While SOTSU and GOU lack their predecessor’s impact, these continuations did nonetheless manage to convey the idea that human desires, augmented by otherworldly powers, are a recipe for suffering; Satoko was simply never meant to possess the same power as Rika, and even though Rika is able to live endlessly by virtue of her bloodline, she certainly experiences no joy in reliving the same few weeks endlessly. Regardless of what Satoko’s objectives might’ve been, accepting Eua’s power ended up turning GOU and SOTSU into a crude approximation of the unstoppable force paradox, which asks the outcome of an unmovable object meeting an unstoppable force. From a physics standpoint, the paradox results because an unstoppable force has infinite energy and cannot be dispersed by any means, whereas the unmovable object has infinite inertia and cannot be displaced by any means. Physicists have found an answer for this by suggesting that the result is dependent on one’s frame of reference, while other philosophers have cleverly suggested that the object and the force are one and the same. Assuming this to hold true in SOTSU, the conflicting goals between Rika and Satoko (moving away from Hinamizawa to experience the world, and staying behind to appreciate things forever) is resolved by means of a compromise. Instead of allowing the forces to meet and clash, Satoko and Rika’s problems are addressed by approaching it from a different perspective; namely, friendship isn’t about being together forever, but about being together despite being apart. This is what SOTSU and GOU were likely to have been going for. However, rather like how the solution to the unstoppable force paradox requires an unconventional solution that does not yield a satisfying answer, SOTSU and GOU together do not yield a story that is fully rewarding. This leads to the inevitable question of whether or not SOTSU and GOU are worthwhile for fans. For my answer, I fall back on an old classic from my health science days: “it depends”. 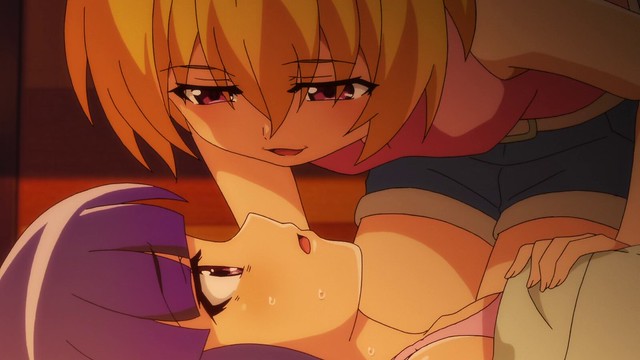 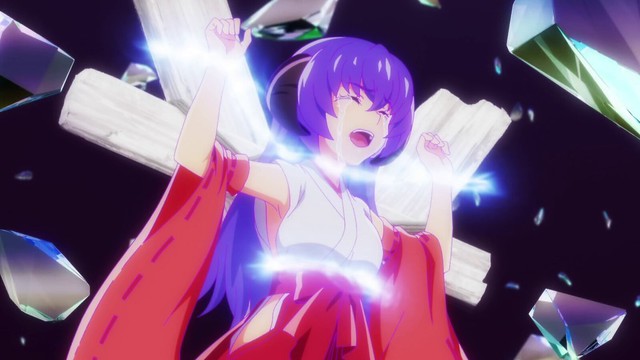 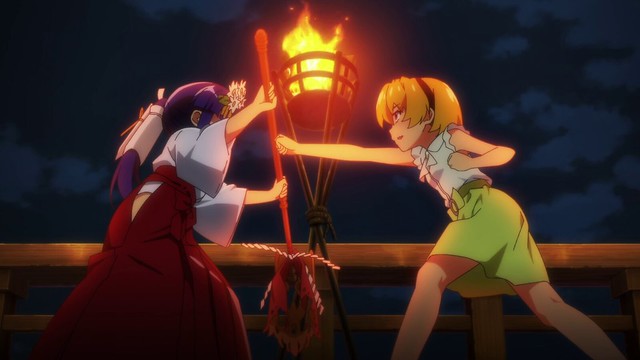 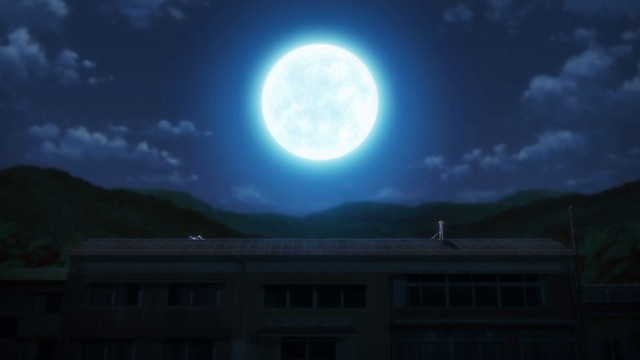 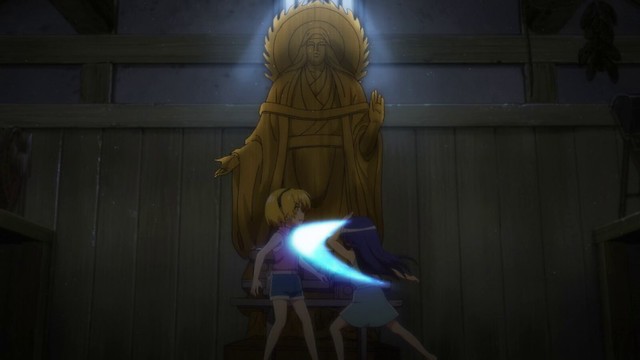 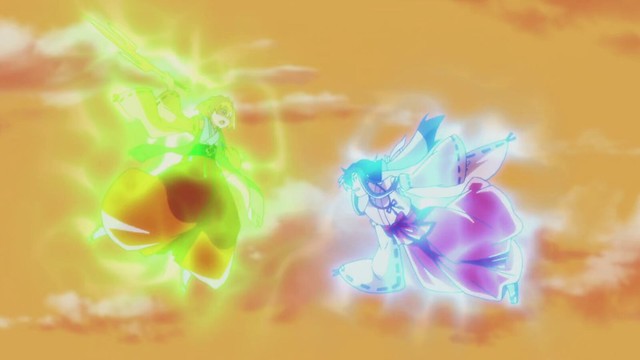 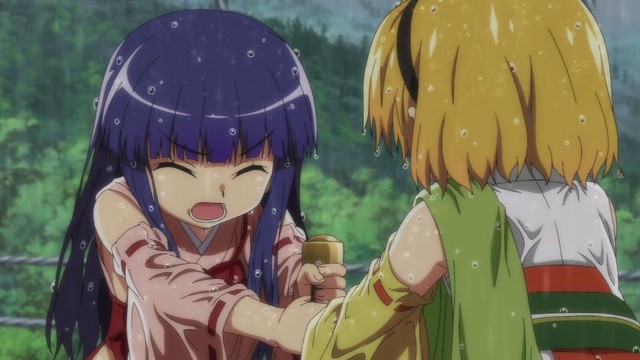 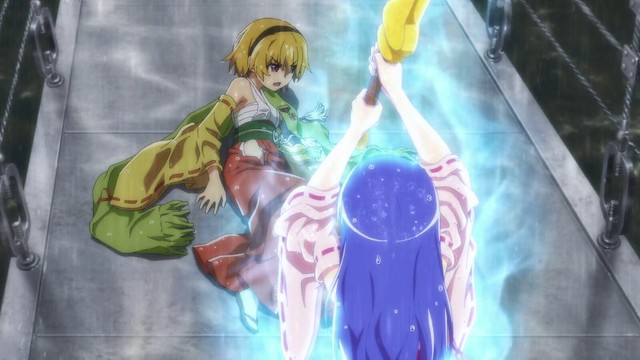 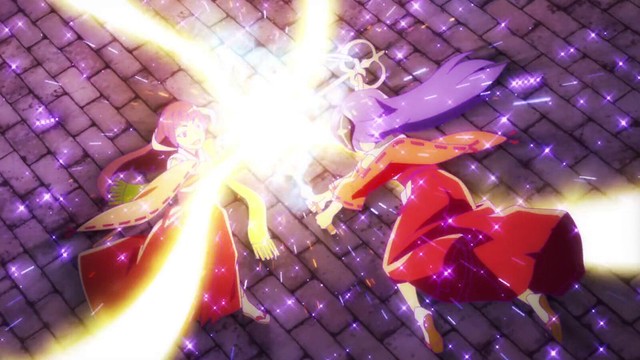 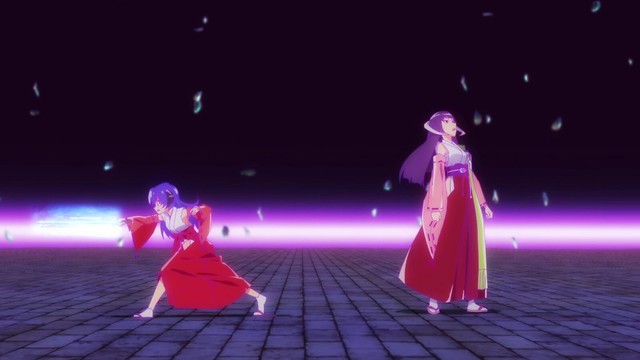 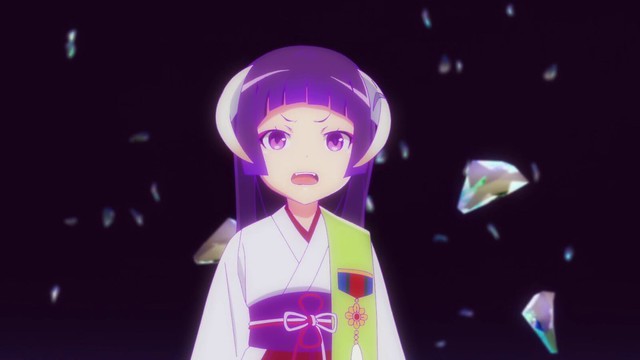 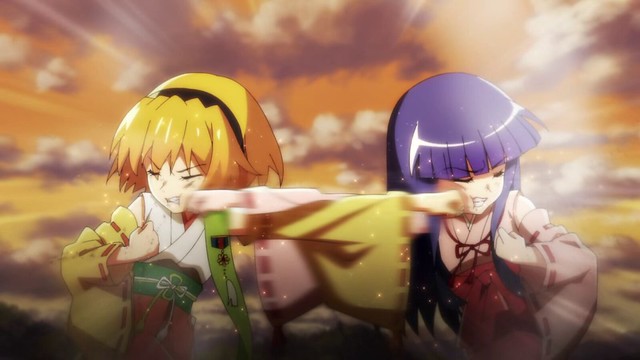 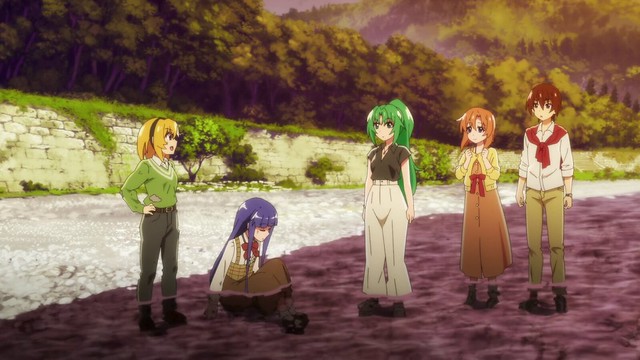 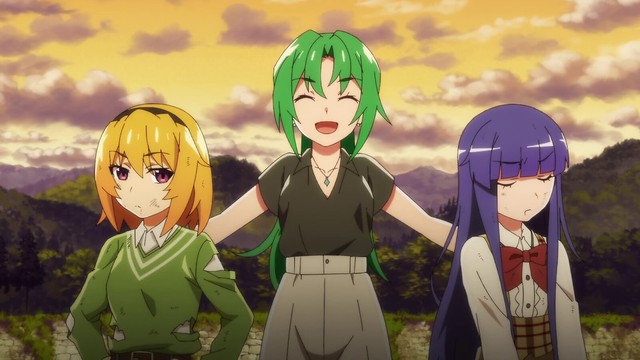 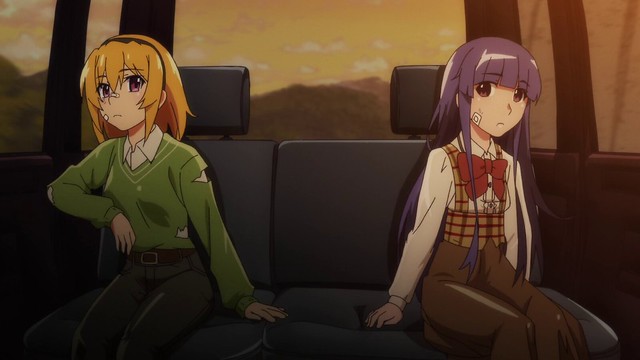 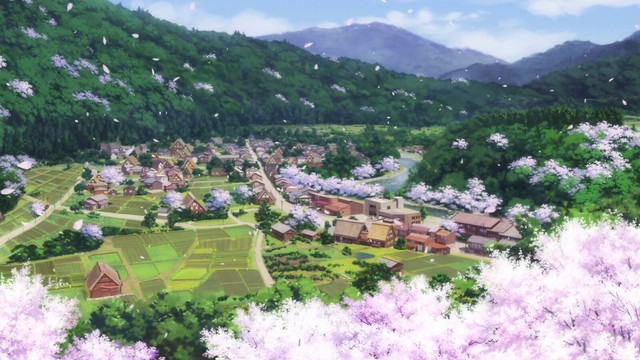 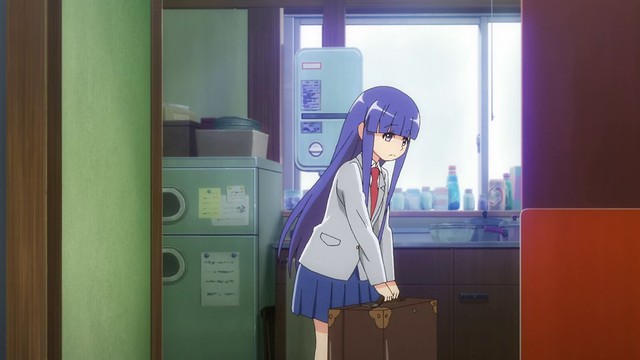 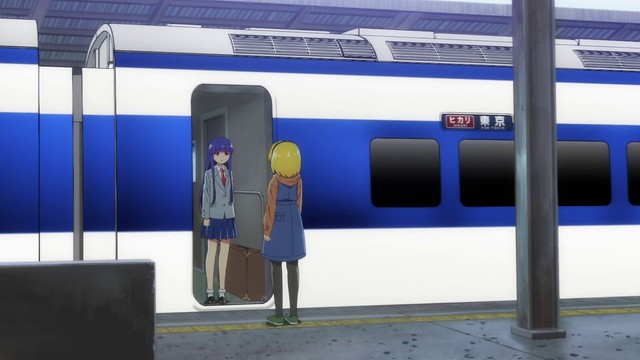 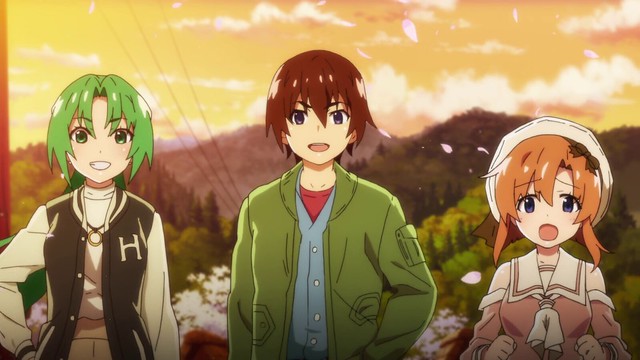 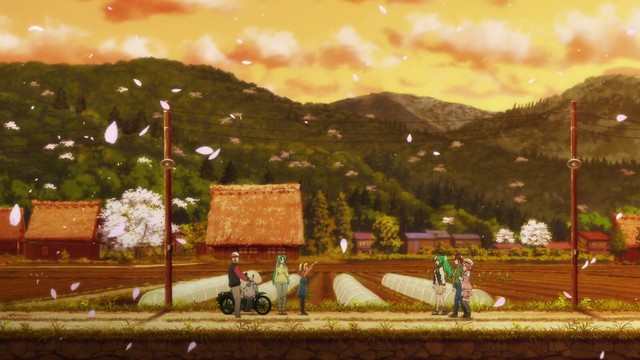 My enjoyment of a given anime and the subsequent verdict is not dependent on a predetermined rubric composed of a checklist; typically, my experience is based on whether or not I got anything meaningful out of something, and since I tend to be looking for this actively, most of the time, I do end up with some sort of discernible theme. In this area, SOTSU has not failed for me, and at the very minimum, even though the anime goes about doing so in a lengthy and roundabout manner, SOTSU still has a message to leave with viewers. The other aspect of SOTSU (and GOU) I found enjoyable were the pieces of incidental music that Kenji Kawai composed: Kawai has been with Higurashi since the beginning, and the stylistic elements he uses here is consistent with how he had scored the Ip Man soundtrack. While Higurashi and Ip Man have drastically different motifs, Kawai’s use of strings and percussion are virtually identical in their respective series’ most emotional songs. Eua’s inclusion into GOU and SOTSU had made the anime very inconsistent in terms of emotional impact; on their own, Eua’s over-the-top mannerisms and irreverent attitude had diminished what was going on for Satoko and Rika. She laughs at the tragedy, and invites the viewer to do the same even as Hanyū represents the opposite end of the spectrum, desperately trying to stave off another calamity. Viewers are pulled in two directions, but familiar music helped to ground a given moment and remind me that there was a point being made. In this area, having Kawai’s signature style was an asset: listening to the music in each moment clarified what it was intended to do, and this in turn helped me to understand why something was happening. When everything is said and done, SOTSU made a brave stab at bringing an old classic into the present, and covers a side of Higurashi I certainly thought to be impossible; it’s not easy to make a recommendation for SOTSU, especially for fans of the original Higurashi and KAI, but on the flipside, I do not feel the same level of vitriol towards SOTSU as others out there have: the story wasn’t something that impresses, but at the very least, there’s still a discernible theme, and the music is pretty good. On these grounds, Higurashi SOTSU does not dethrone Glasslip as my least favourite anime of all time: Glasslip‘s lack of a theme means that at least, for the time being, it continues to sit in the unenviable position of being the worst anime I’ve watched to completion.

3 responses to “Higurashi SOTSU: Whole-Series Review and Reflection, Remarks on the Curtainfall”