The Aquatope on White Sand: Review and Impressions After Fifteen

It turns out that Fūka and Kukuru are now neighbours, with Fūka having looked ahead to see where Kukuru had moved to before returning. On her first day, Fūka apologises to the director for arriving late, and is promptly assigned as an attendant, where she is to work alongside Chiyu in her duties. Meanwhile, spurred on by Fūka’s return and her determination to ace a test Chiyu tasks her with (memorise the name of all the African Penguins in their exhibit), Kukuru resolves to do her best to and set up the logistics for a behind-the-scenes tour. Despite running into some hiccoughs with the penguin exhibits (Chiyu doesn’t feel the penguins are ready to be shown, since they agitate easily and need time to adjust to their new homes). After Fūka aces the test and demonstrates to Chiyu that she’s serious about excelling in her role, she suggests that certain measures can be taken to keep the penguins happy and go ahead with this segment of the tour. On the day the behind-the-scenes tour opens, only a single family shows up. While Tetsuji is disappointed with the results, the tour had actually gone very well. Later, Tetsuji sets Kukuru up with the goal of quickly designing an exhibit, and to her surprise, approves of the proposal to exhibit sea slugs. While sea slugs are tricky to look after, Kukuru does her best in trying to put the exhibit on, driven by her own passion for aquatic life. One of the species proves especially tricky, and despite orders to go ahead despite not knowing what this species’ diet consists of, Kukuru decides to keep these sea slugs out back until they can figure things out. In the process, Kukuru clashes with Kaoru Shimabukuro, one of the more senior attendants, but once the two get their feelings into the open, it’s clear that the two have more in common than they first thought. Realising this, Kaoru invites Kukuru to check out a section of the shore in search of the food source for the remaining sea slugs, and Kukuru enthusiastically accepts. After I hastily rushed out a talk for The Aquatope on White Sand two weeks earlier, things have settled down a little now as Kukuru and Fūka begin really learning the ropes of their new positions at Tingarla, supporting one another as they had previously at Gama Gama.

While Fūka’s rapidly adjusting to the pace at Tingarla, Kukuru has had a tougher time so far – despite her undeniable passion, drive and devotion, she continues to clash with Tetsuji and other members of the staff as she struggles to delineate her personal and professional worlds. For Kukuru, marine life and aquariums are a part of her as much as it is a job, and consequently, in her eyes, every fight is her fight. However, the exchange she has with Kaoru marks a turning point of sorts in The Aquatope on White Sand; while Kaoru is able to clearly articulate her respect for the ocean and commitment to Tingarla’s success through conservation and education, at her core, she believes in the same things that Kukuru believes in. The only difference is that Kukuru is a bit more raw about how she feels, and is a ways more impulsive: aside from the disparity in how she expresses herself, Kukuru and Kaoru are more similar than unlike, and for Kukuru, spotting this means better being able to empathise with the attendants while at the same time, balancing her duties for the marketting team. Up until now, Fūka and Kai had been Kukuru’s main source of emotional support, and both have already gone above and beyond in reassuring Kukuru, looking after her and giving her a chance to regroup. To see Kukuru slowly realise that there are other people like her, working towards the same long-term goal, then, is to suggest that over time, Kukuru will be able to confidently stand of her own accord. The past two episodes have also shown that Kukuru and Tetsuji most certainly do not get along – Tetsuji is purely concerned with growth and customer retention, values that impress a board during quarterly meetings, while Kukuru is very hands-on and wants to give customers the best possible experience so they’re inclined to return and learn more about aquatic life. While the way Kukuru and Tetsuji express things is drastically different, at their core, Kukuru and Tetsuji actually do have the same objective: bring people to Tingarla so they can learn more about marine biology, and become longtime customers to keep Tingarla’s doors open. Having found common ground with Kaoru, The Aquatope on White Sand suggests that with people she can lean on, learn from and be encouraged by, Kukuru will find ways to strike a balance between reducing customer turnover and doing the hands-on work she’d loved about Gama Gama: knowing P.A. Works, Tetsuji and Kukuru will certainly come to understand one another better, in keeping with what The Aquatope on White Sand has strived to convey thus far. 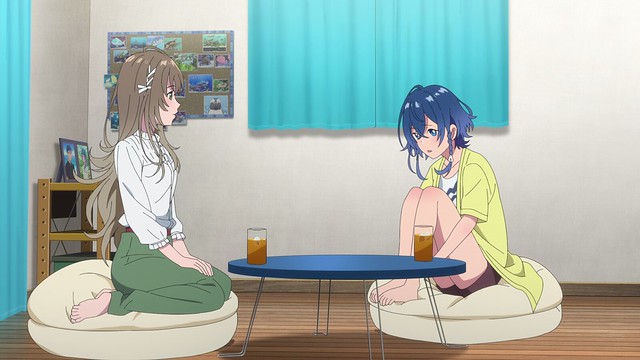 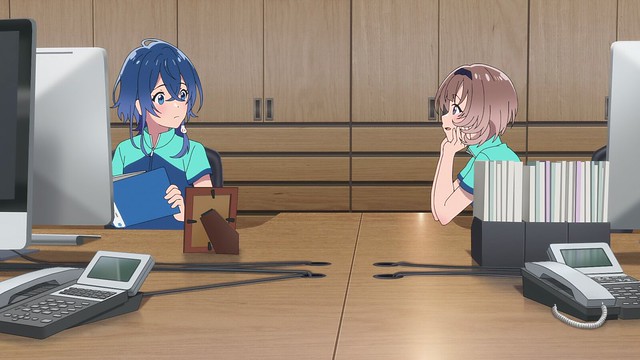 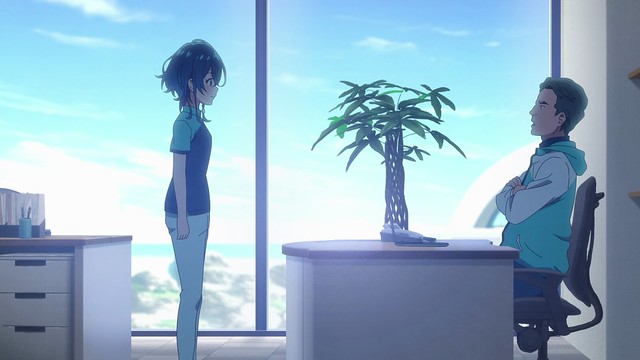 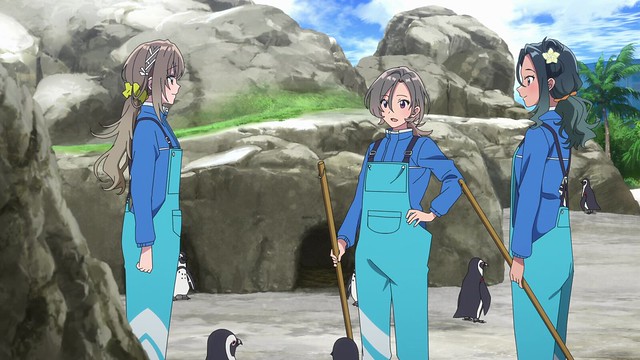 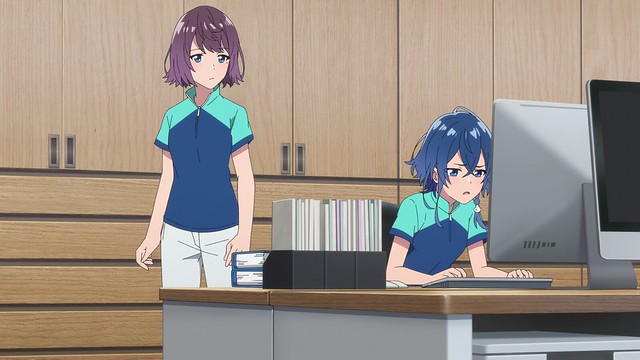 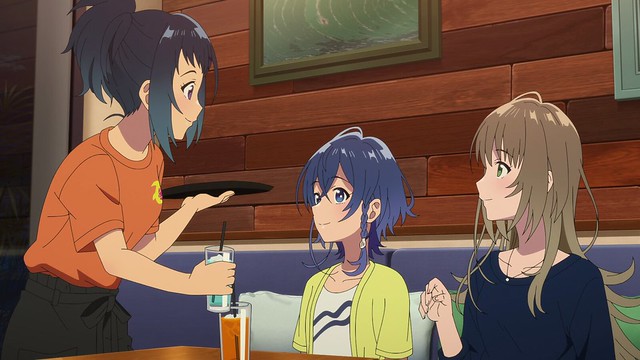 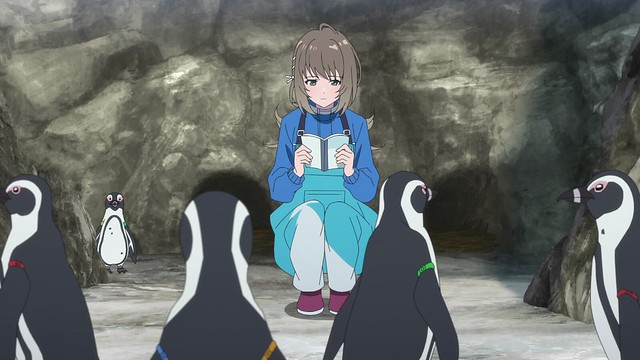 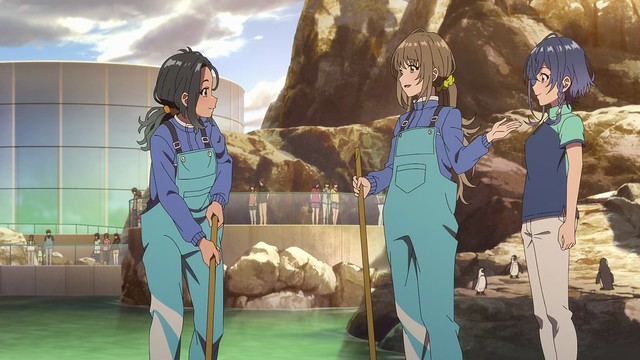 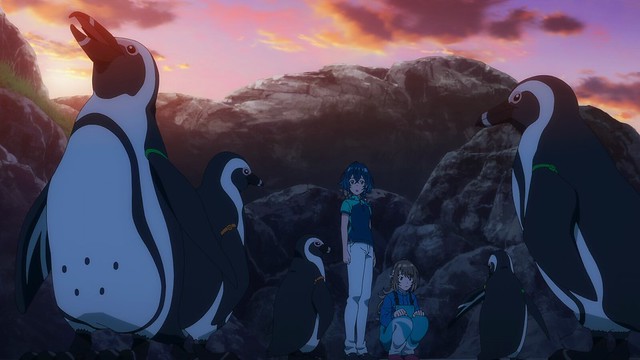 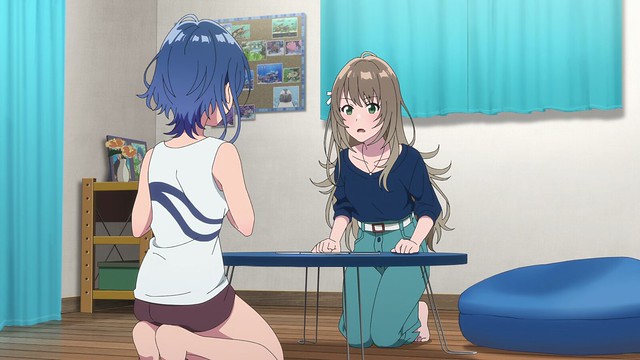 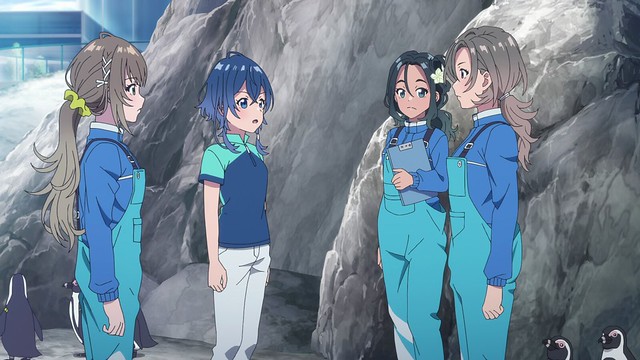 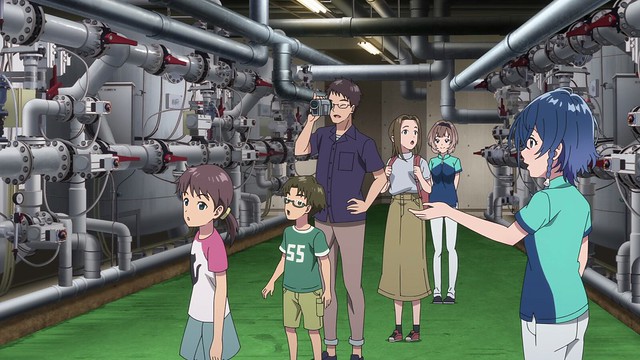 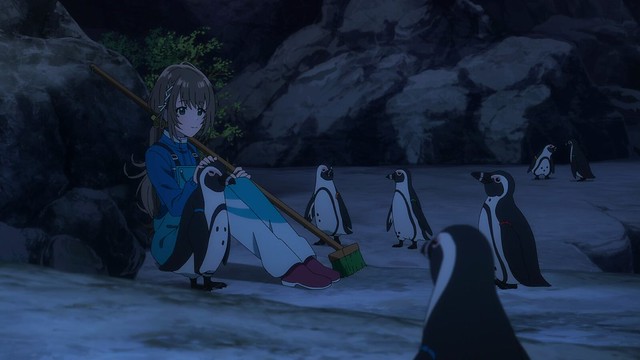 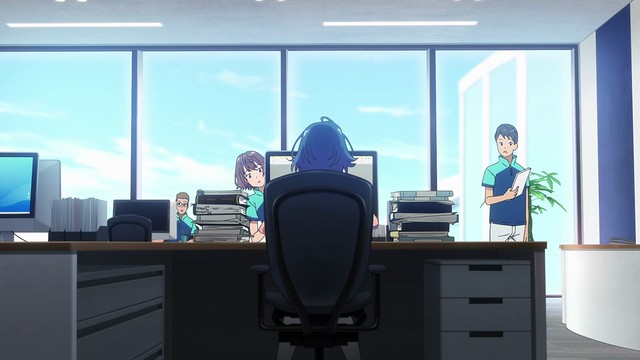 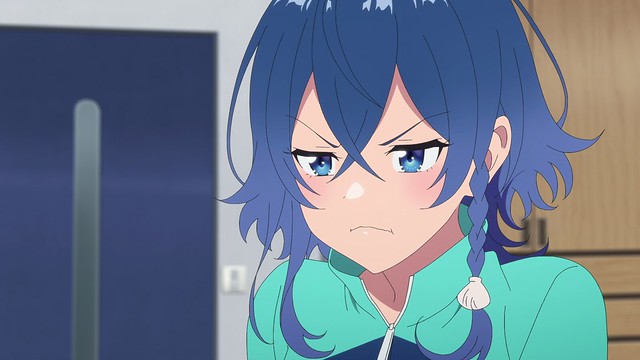 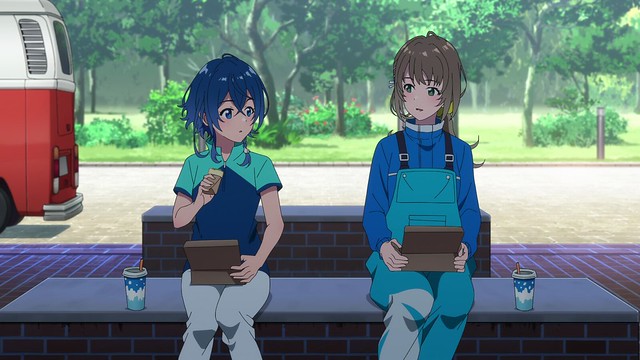 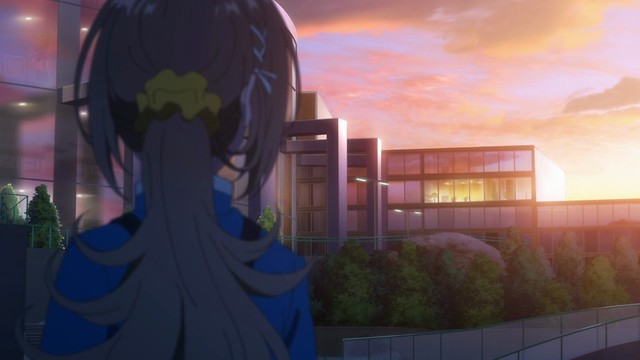 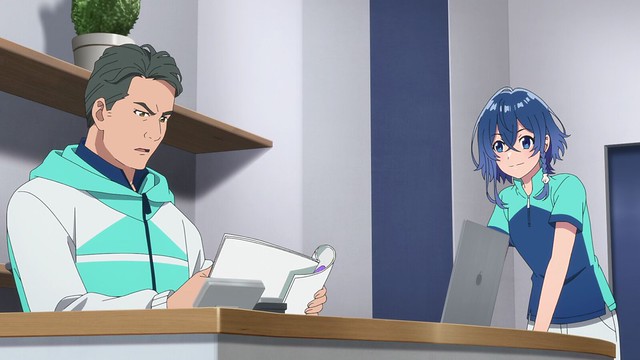 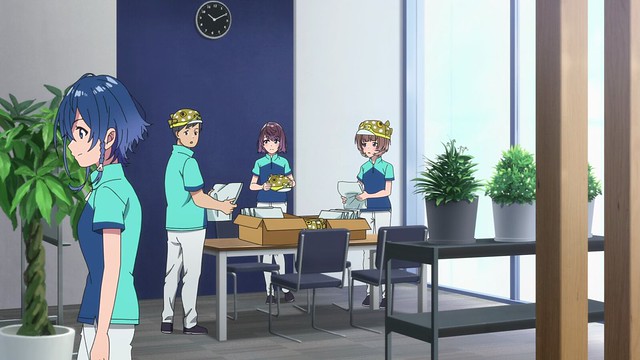 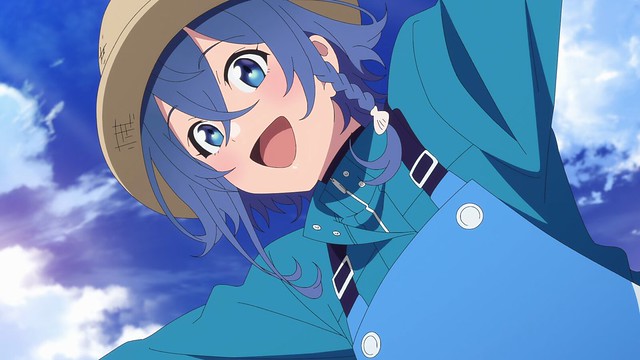 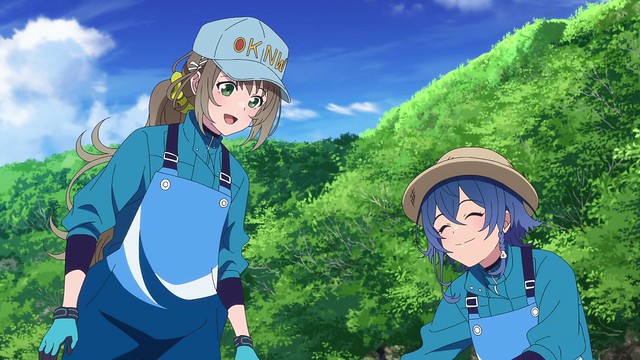 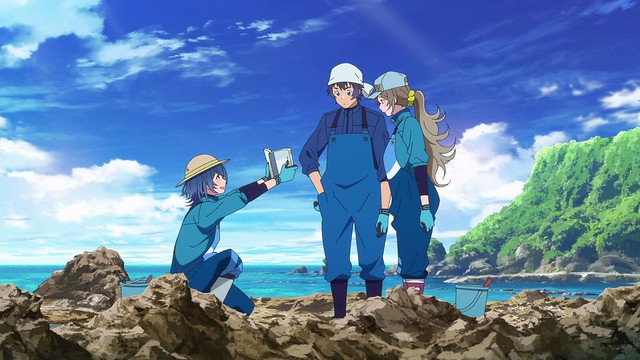 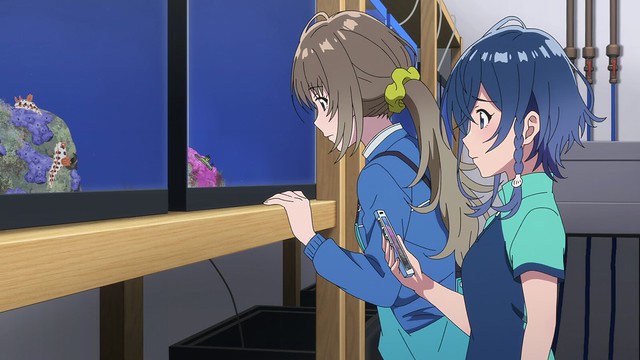 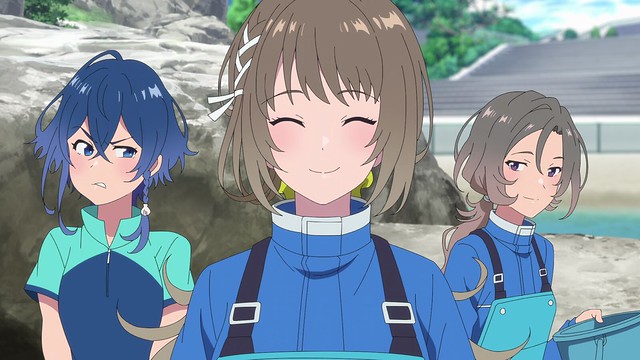 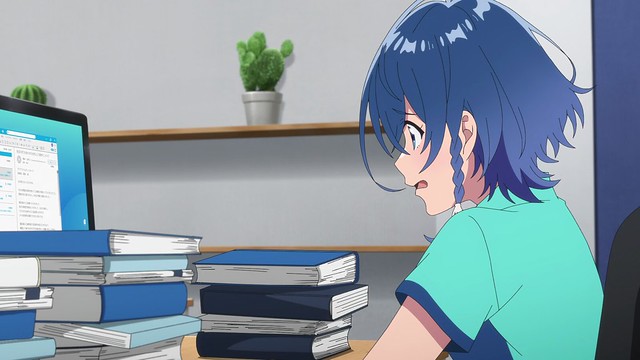 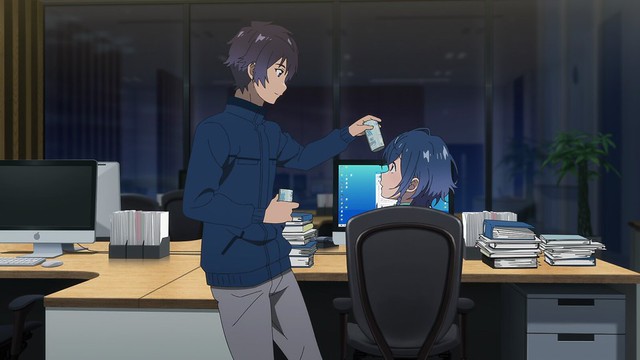 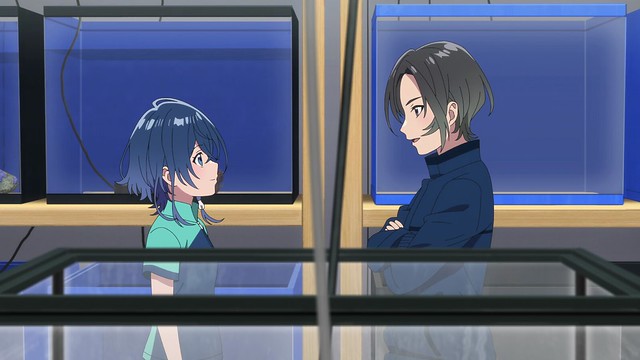 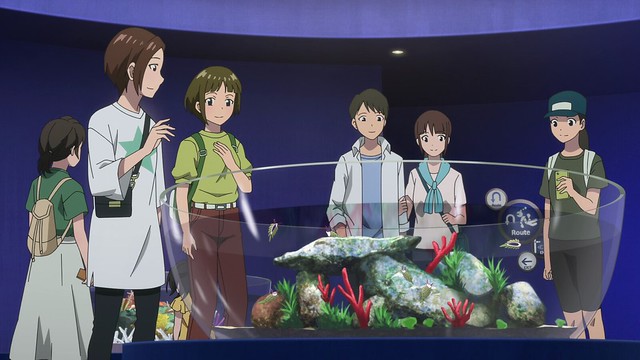 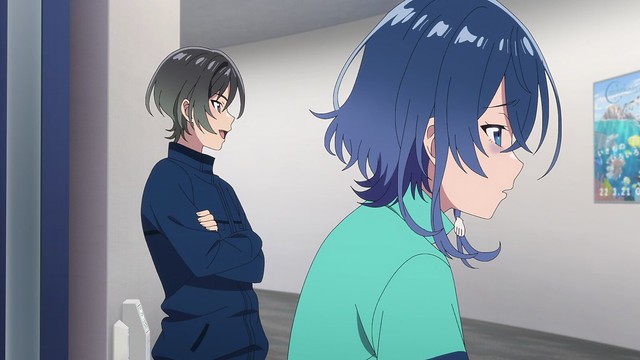 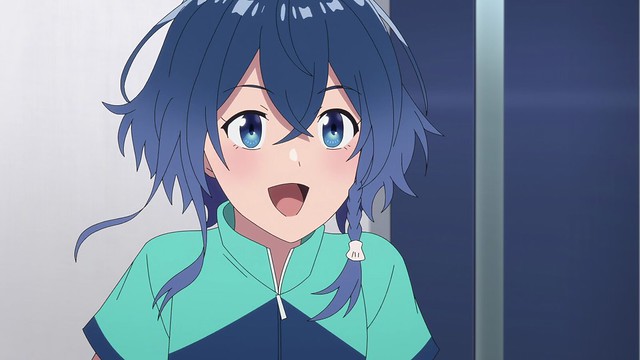 So far, where given the opportunity, Kukuru has begun to meld what she’s learning about large-scale operations together with her own experiences in running things at a more personal level. The idea for a sea slug exhibit demonstrates how Kukuru is very driven, determined to make things work, and Tingarla’s director evidently spotted this in Kukuru – while she had longed to be an attendant, placing her in marketting allows Tingarla to have someone who knows their stuff to guide the others in creating compelling exhibits, special events and promotions to drive interest. Because Kukuru has satisfactory knowledge about marine biology, she is able to come up with exhibits that are feasible, and at the same time, really showcase what about a species or phenomenon is worth studying. Once Kukuru is allowed to do this, her old energy truly begins returning to her – it is fair to say that one can take Kukuru out of Gama Gama, but it is hardly possible to take the Gama Gama out of Kukuru. This isn’t necessarily a bad thing, and having now seen Kukuru acclimatise to the requirements of her position on top of bringing in her previous experience to make things work as best as she can, it is clear that The Aquatope on White Sand intends to present how people adjust to their work, make the most of things and in time, come to take on a newfound appreciation for what they’re doing. While Kukuru’s got her own challenges, the former Gama Gama staff appear to be doing their best to adjust to life at a larger aquarium. In particular, Kai appears to get along quite well with Eiji, who encourages him to be upfront with his feelings for Kukuru. Similarly, Marina and Fūka are also on friendly terms. The beginnings of new friendships (or at least, improved relationships among coworkers) is beginning to manifest – early on, Karin hears faint rumours that Gama Gama’s former staff are very tight-knit and uptight, but after fifteen episodes, this clearly isn’t the case. As Gama Gama’s old staff adjust to working with the remainder of Tingarla’s staff, new relationships are formed, as is an increased understanding and appreciation of what everyone contributes. The resulting empathy sets the stage for improving communications, and this is where The Aquatope on White Sand could become superbly exciting.

11 responses to “The Aquatope on White Sand: Review and Impressions After Fifteen”