PuraOre! Pride of Orange: Review and Impressions After Three

Me work hard five days a week, sweeping garbage from the street
Come home not want book to read, not ’nuff pictures for me see
Sit right down in favourite chair, wearing only underwear
Favourite night is Saturday night, ’cause me can watch hockey fights
Me Like Hockey!

When the Crochet Club’s members, Manaka, Ayaka, Mami and Kaoruko learn of ice hockey lessons being held at the local arena, they decide to check it out. They are surprised that their instructor, Yōko, seems to be tasking them with dance moves as well, but when they get onto the ice, they are impressed with how exciting the experience is. Along the way, Manaka, Ayaka, Mami and Kaoruko meet Riko and Naomi, two former ice hockey players who are getting back into things at Riko’s insistence. After a thrilling first class, Manaka and her friends decide to come back, and the next weekend, after helping with a filming session at the Mizusawa’s ryōkan, the TV crew swing by the arena, as well. However, Mami is a little disheartened after their second session: she’s transferring away during the next term. Once her friends learn of this, Manaka suggests that they give Mami one final parting gift, in the form of a hockey game against a local team. After training for this day, Manaka and her team are annihilated 9-1 (Manaka manages to score in the game’s final moments), but have a great time. On the day of Mami’s departure, everyone sees her off, and although Manaka is noticeably absent, she ends up riding out to bid Mami a farewell. This is PuraOre! Pride of Orange (PuraOre! from here on out for brevity): this anime comes as a bit of a pleasant surprise for hockey fans, presenting an introduction to the sport of ice hockey, which is a minor sport in Japan compared to baseball and soccer. PuraOre! is produced by CAAnimation and C2C; the latter had been involved with Hitori Bocchi and Harukana Receive, both of which were solid series from a technical standpoint. In particular, Harukana Receive had been particularly good with its art and animation throughout the series, and this sets a positive precedence for the hockey that viewers will see as PuraOre! continues. However, for the time being, despite being a hockey anime, PuraOre! has placed more emphasis on character growth as opposed to the sport itself.

The approach in PuraOre! is appropriate for viewers who are newer to hockey: much as series like K-On!, Yama no Susume, Yuru Camp△, Koisuru Asteroid and Houkago Teibou Nisshi had done before, PuraOre! has elected to set the table and establish the friendship between Manaka, Ayaka, Mami and Kaoruko, as well as the fact that Naomi and Riko had previously played ice hockey. This is a deliberate choice to allow viewers the chance to see how their stories began, and show how everyone is off the ice. For hockey fans familiar with things like the National Hockey League or Team Canada, PuraOre! is going to come across as being very slowly-paced, to the point of raising the question of whether or not this is an anime about ice hockey, or an anime with ice hockey as an aside: compared to the fast-paced plays of the NHL, or the unrivaled joy of watching Canadian teams take home gold on the world stage, PuraOre! portrays a group and their humble beginnings. Manaka and her friends can skate, but this is about the extent of their experience on the ice, and in their first game against another team, Manaka and her teammates barely even skate to create openings. Seeing things begin at the very beginning means accepting, and embracing the fact that Manaka and her friends aren’t going to have any special plays, will fan on shots and miscommunicate: this is actually a part of PuraOre!‘s charm, since it gives newcomers a chance to pick up ice hockey’s rules and terminology. While I’m somewhat familiar with ice hockey, having become a fan ever since Jerome Iginla and the Calgary Flames went on a spectacular Stanley Cup run during the 2003-2004 season, it is understandable that PuraOre! is progressing so slowly: Harukana Receive had done the same thing by introducing viewers to beach volleyball with Haruka and Kanata playing against Narumi and Ayasa, before introducing new characters to help them improve as players. PuraOre! is set on a similar trajectory, and with Yū Kiyose joining Manaka and the others, things are also looking to pick up. 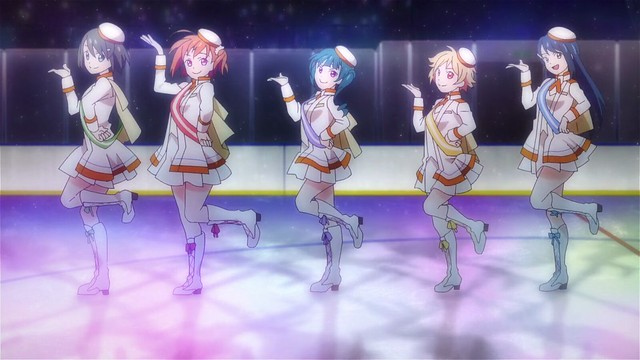 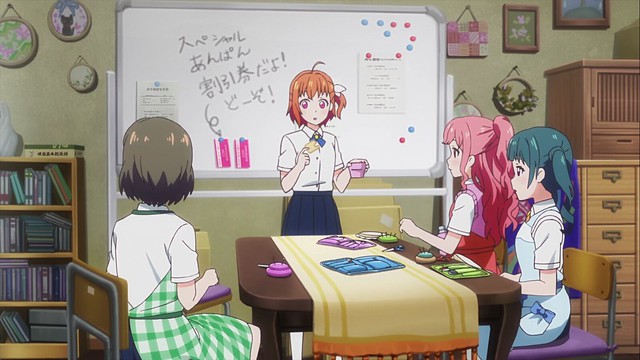 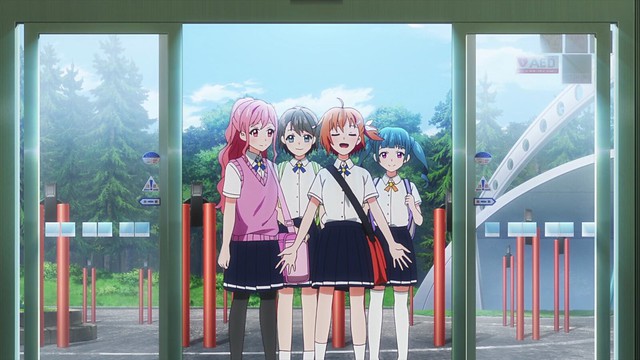 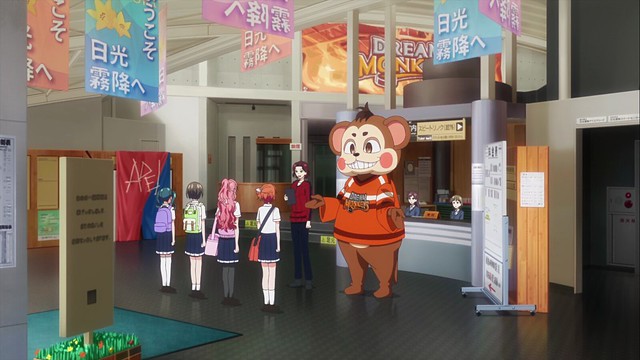 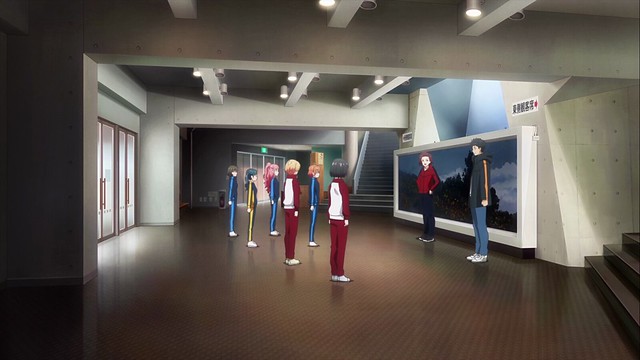 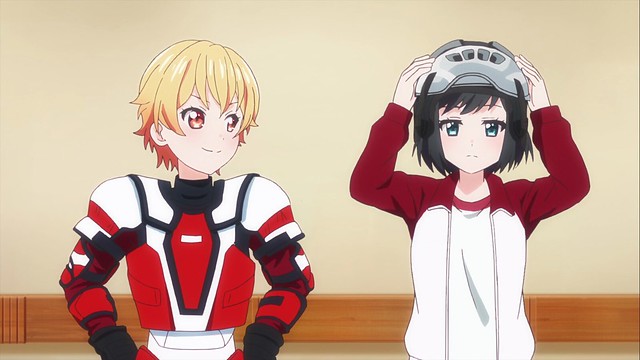 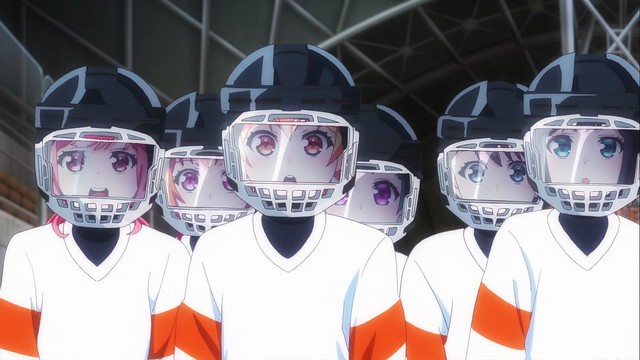 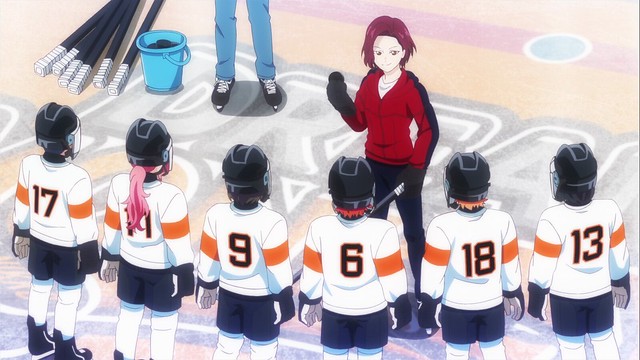 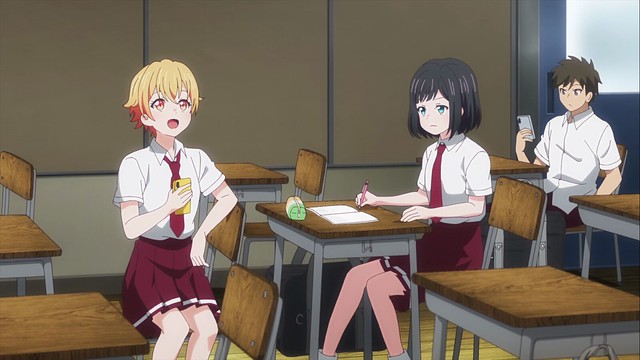 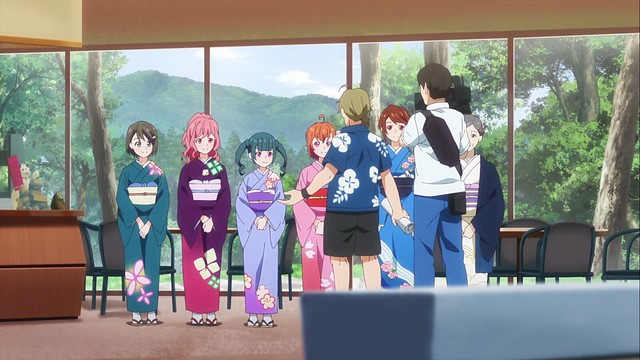 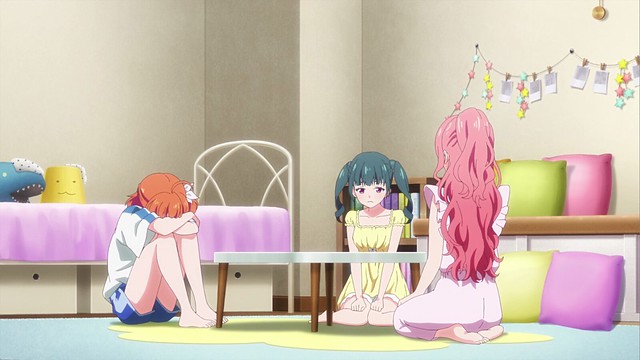 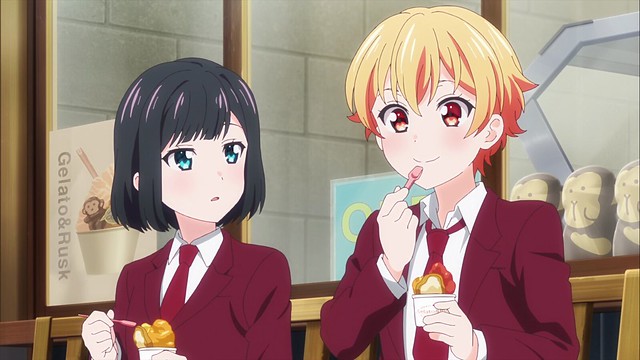 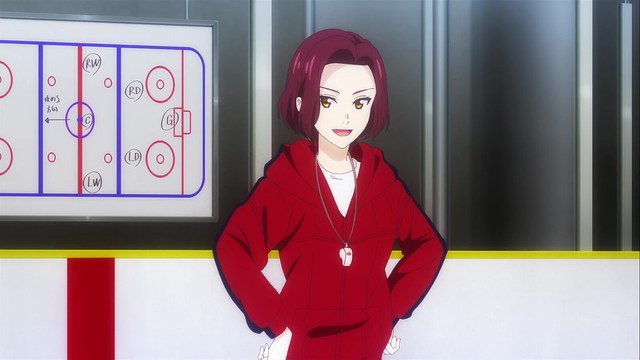 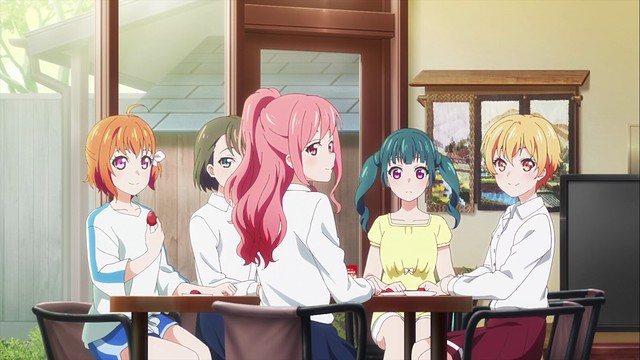 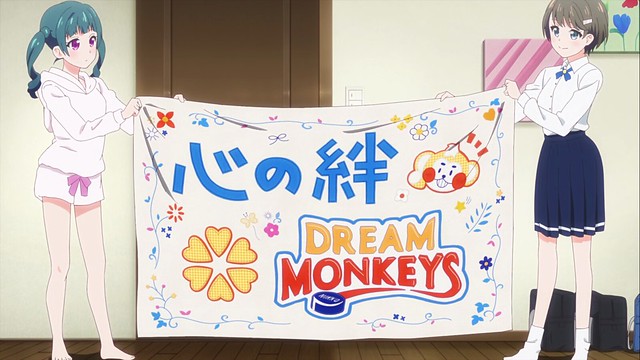 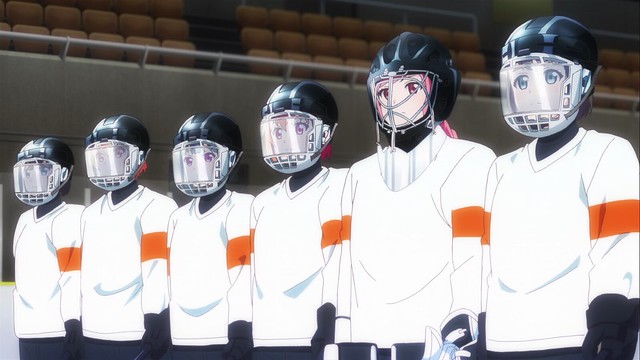 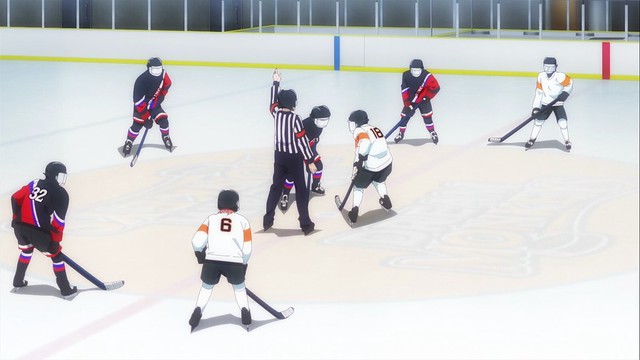 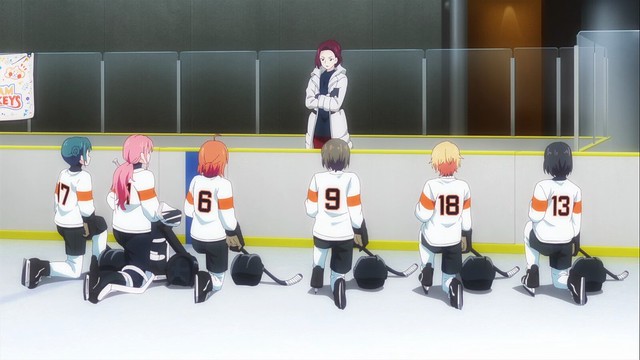 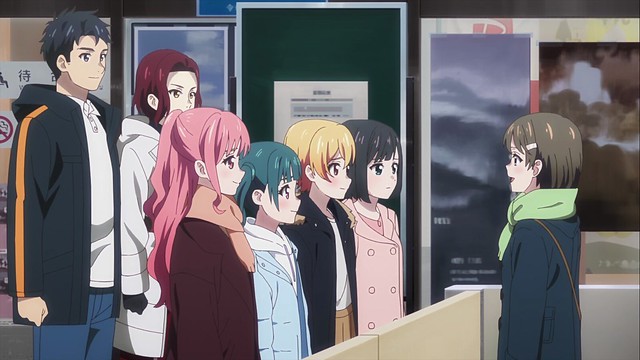 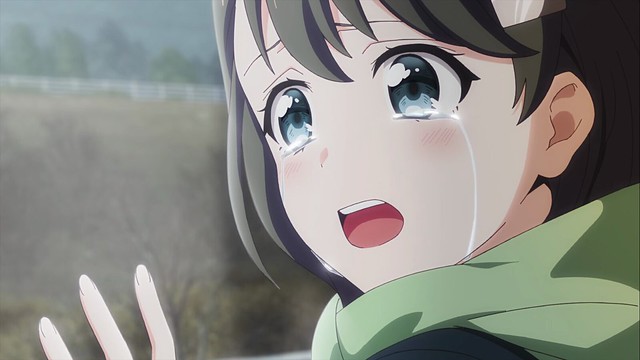 One other aspect of note is that PuraOre! plainly written for a Japanese market: during the game shown in the series’ very opening, Manaka and the Dream Monkeys manage to score a game-winning goal against a Canadian team with mere seconds on the clock, and then in their victory celebration, they give an idol-like performance on-ice. Firstly, Canadian teams consistently beaten Japan whenever they play. Secondly, while goals are possible in a game’s dying moments, in a tie game, players will often adopt a more defensive approach and allow the clock to wind down: a sudden-death overtime setup would’ve made the moment more exciting. Finally, I’ve certainly never seen anything like this in any NHL or international game before, and this aspect was, more than likely, meant to help PuraOre! sell image albums. The approach seems a little gratuitous, but previously, Uma Musume had employed a similar approach with the horse girls and also managed to engage me with the sport of horse racing. One can’t fault PuraOre! in taking this route: most Japanese viewers aren’t likely to be as familiar with ice hockey as viewers over here, and PuraOre! does feel like it is intended to accommodate folks who are new to hockey in its earlier episodes. However, as with Uma Musume and Harukana Receive before it, once the basics are done, PuraOre! has plenty of opportunity to engage and excite viewers with its story of Manaka and her friends’ journey through ice hockey, as well as increasingly sophisticated plays and deepening feelings of camaraderie as everyone gets to know one another better. As it stands, I’m rather excited to see where PuraOre! ends up, and I will note that as a Flames fan, I will be making references to my favourite team when I continue on with this series. For now, I intend to return once the whole of PuraOre! is in the books, but if the series continues to offer a great deal of hockey to talk about, I could see myself returning periodically to offer my thoughts on things.

One response to “PuraOre! Pride of Orange: Review and Impressions After Three”