The Aquatope on White Sand: Review and Impressions At The ¾ Mark

14 Comments Posted by infinitezenith on November 6, 2021

“If there is any one secret of success, it lies in the ability to get the other person’s point of view and see things from his angle, as well as your own.” –Henry Ford

While veterinarian Takeshita visits Tingarla to check up on a penguin egg is about to hatch, Chiyu becomes preoccupied with her son and declines the overnight shift, prompting Kukuru to take over and reorganise things, even persuading Tetsuji to allow her to take on the night shift as an attendant. However, Chiyu is displeased about this and openly confronts Kukuru. Later, Fūka visits Chiyu and learns about her son, Shizuku; it turns out that after graduating high school, Chiyu married and took a job at a local aquarium, but when her son fell ill, she was unable to work and was laid off. She returned to Okinawa after a divorce and since then, had tried to keep her child a secret so she would be able to keep her job. Knowing this, Kukuru decides to walk a mile in Chiyu’s shoes and looks after Takeshita’s son, learning that looking after children is no walk in the park. Having now come to terms with Chiyu, Kukuru resolves to be more mindful of Chiyu, who in turn takes her son to the aquarium and arrive just in time to watch the new penguin hatch. Kukuru watches Shizuku and reminisces about when her parents took her to Gama Gama. Later, Kukuru and Fūka organise a get together with their coworkers in an effort to know them better. Kūya, Akari and Marina show up in the morning, while Kaoru and Chiyu show up later and receive massages from Kukuru. Kūya also reappears, having taken off to use the bathroom earlier but never returned until Kai and Eiji show up. They end up having a takoyaki party and light some fireworks before heading home. Kukuru and Fūka settle down with some mango puddings and note they had a fantastic time. When Akari’s suggestion to do a cosplay event to drive visitor counts up is approved, she declines Kukuru’s suggestion to lead the project, feeling that compared to someone like Kukuru, her enthusiasm isn’t quite there to make the event a success. While Kukuru sets about coordinating with the other departments on the event, Akari comes to realise what working an aquarium means to Kukuru when on the eve of the event, Kukuru realises she’d forgotten to place the order for the stickers. While Karin suggests using stamps, Kukuru insists that since they promised stickers, this is what they need to deliver. She decides to work overtime to make it happen, and the next day, the event ends up being a success. Akari herself becomes enamoured with Tingarla’s main exhibit, and Kukuru smiles at the realisation that Akari is one more person who’d fallen in love with aquariums. We’re now three quarters of the way through The Aquatope on White Sand, and in typical P.A. Works fashion, the anime has given viewers a chance to learn more about the characters.

After Kukuru had learnt that she shared more in common with Kaoru than she’d initially thought, it was a logical step to have Kukuru begin making amends with Chiyu; in The Aquatope on White Sand‘s first half, Chiyu and Kukuru had gotten off to a rough start, and these hard feelings had persisted into their time as coworkers at Tingarla. However, this is not to show that Kukuru is mean-spirited or difficult in any way: to Chiyu, Kukuru is someone afforded the luxury of working in a job that she loves, without concern for practical elements like finances. To Chiyu, having a job is a mission-critical part of her life, as it allows her to support her son. Kukuru’s comparatively nonchalant outlook on work can seem inappropriate. The Aquatope on White Sand reveals that this is not the case, and the moment Kukuru learns of the truth, she turns around. While there might still be some lingering feelings of dislike between the two, the fact that Kukuru knows about Chiyu’s son and the circumstances she’s in helps her to be more accommodating and sympathetic. Moments like these are essential towards appreciating what P.A. Works is going for, and serve as a reminder that it is unfair, disingenuous to judge others without being fully aware of their situation. Kukuru’s decision to look after veterinarian Takeshita’s child to better understand Chiyu shows the extent to which she cares about those around her; having seen a hitherto unexpected side to Kaoru, Kukuru is able to grasp that those working at an aquarium are unified by their love of marine life, and that everyone should work together to accomplish a shared goal, rather than against one another. The growth seen in Kukuru indicates that she is learning and maturing as a result of her experience, and while she still longs to be an attendant, has become more capable in her marketting role. Besides learning how to do her assignments more effectively, Kukuru has smiled more in her duties, as well, showing how her passion for marine life is retained. This is in contrast with Akari, who is working at Tingarla as a part-timer to make ends meet for her post secondary; she initially sees her role as that of a job, and while still finishing her assignments, never goes the extra mile to make things succeed. However, it becomes clear that passion can be contagious: after Akari speaks with Tsukimi and learns about her love for cooking even when things get tough, and when Kukuru is willing to stay after hours to ensure the materials for the cosplay event succeeds, she comes to understand what having a great love for something means, as well. In this way, The Aquatope on White Sand has spent time in giving the Tingarla staff exposition; with their backgrounds out in the open, the series is prepped to enter its final quarter, ready for a big finish as Tingarla prepares to deal with something unprecedented. 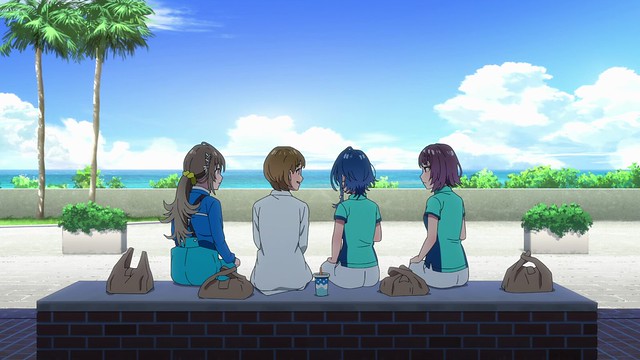 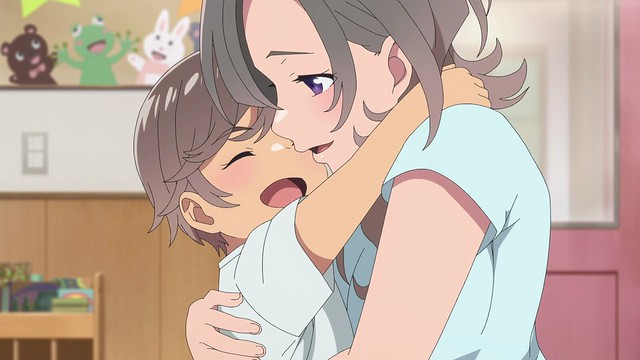 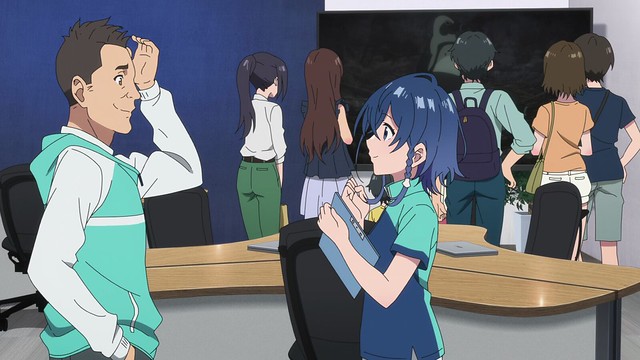 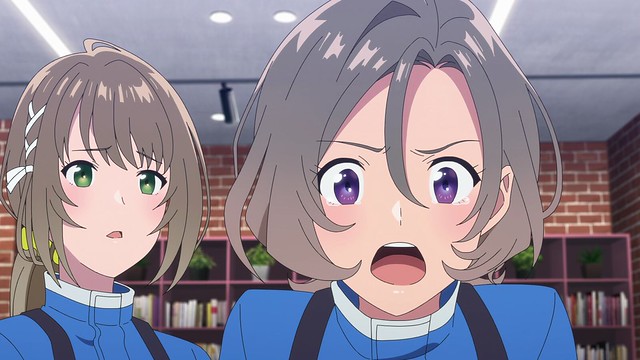 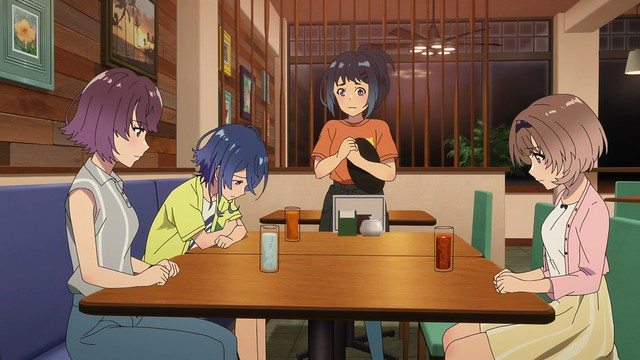 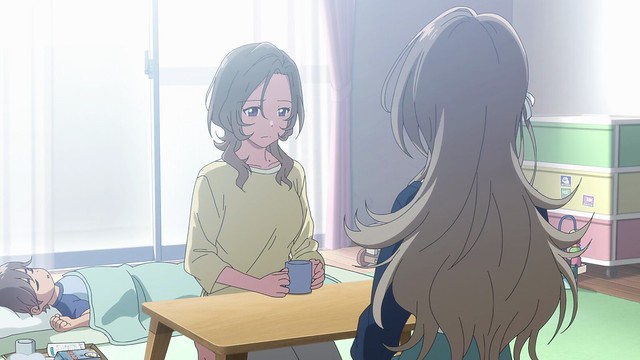 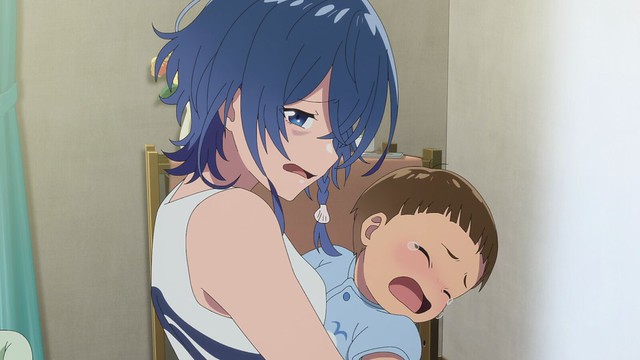 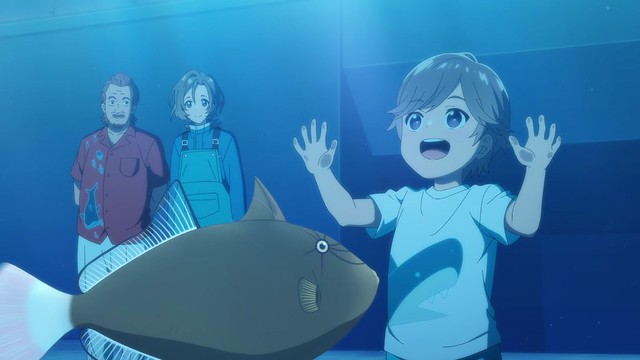 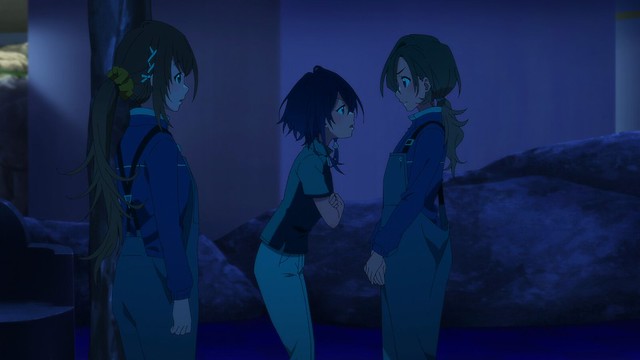 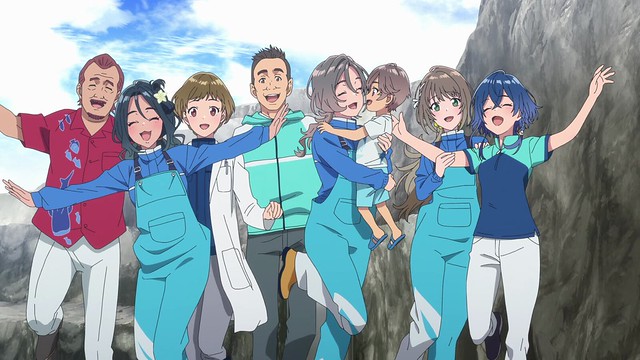 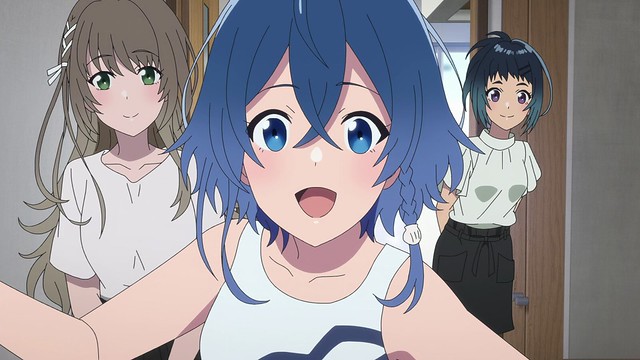 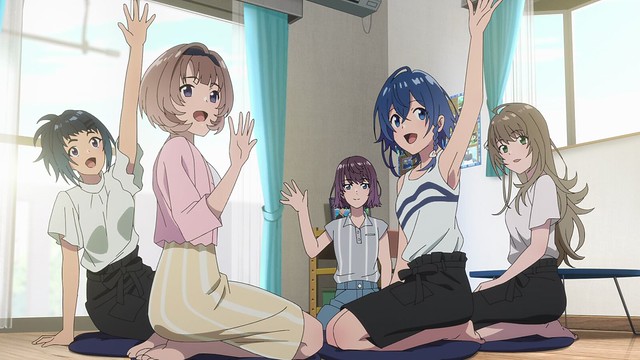 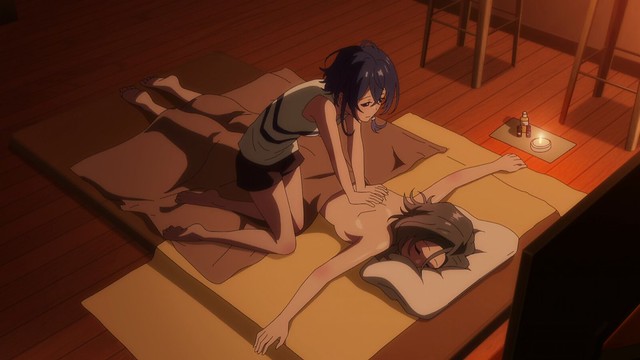 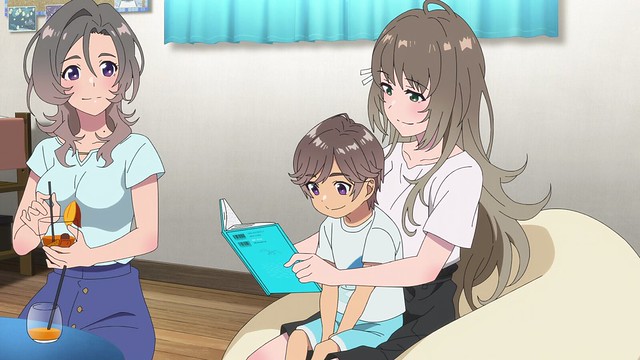 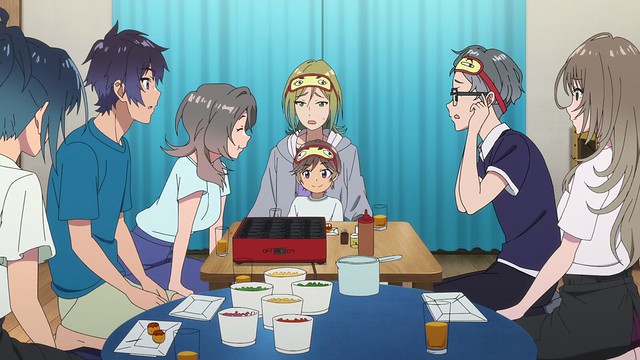 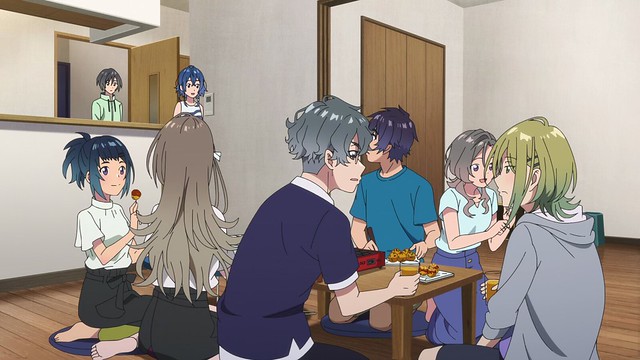 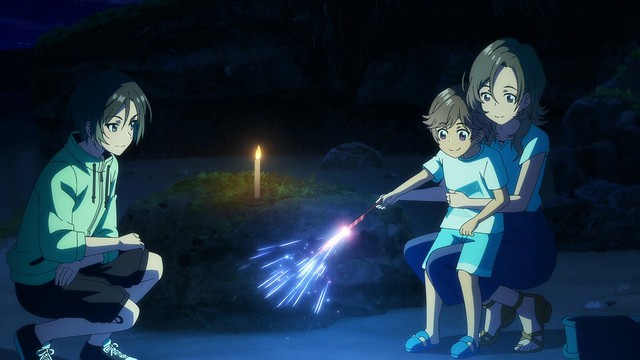 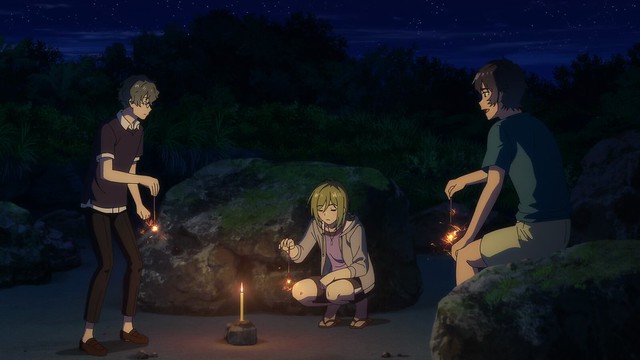 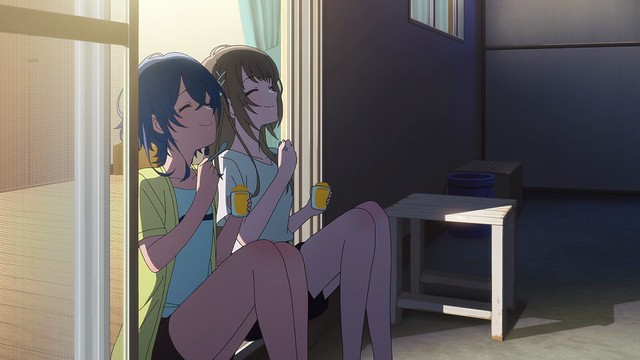 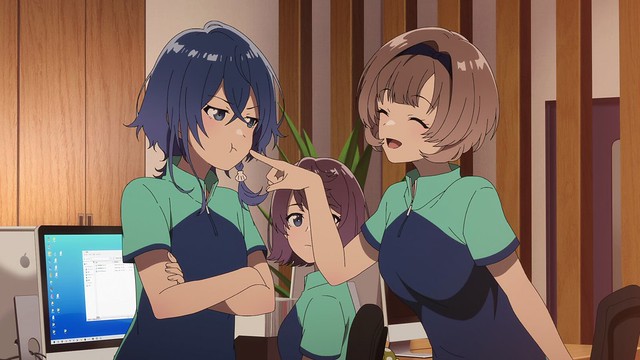 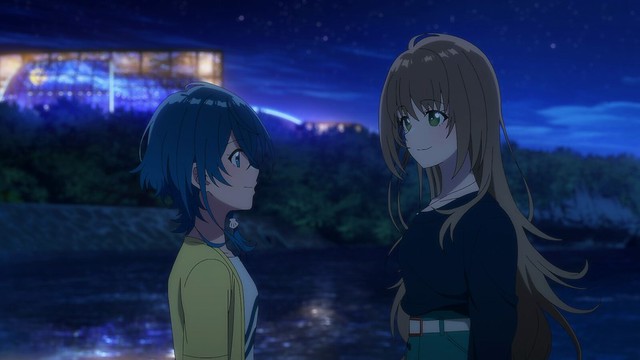 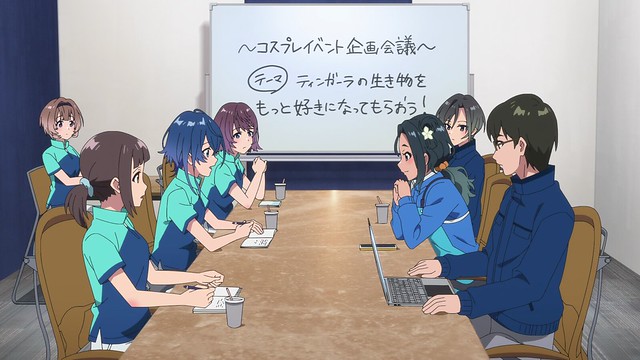 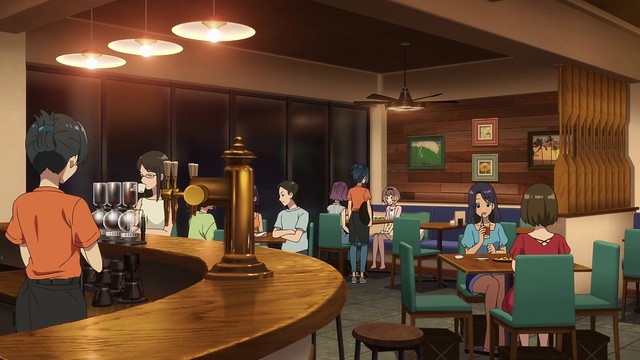 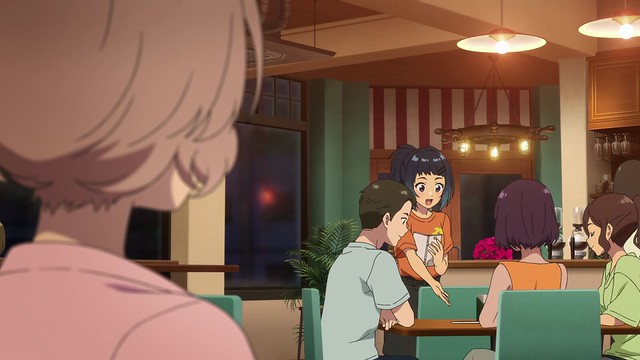 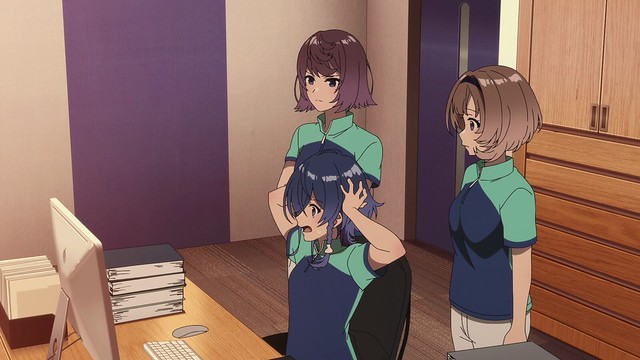 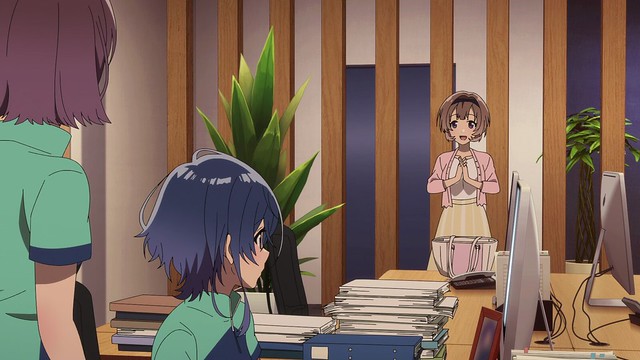 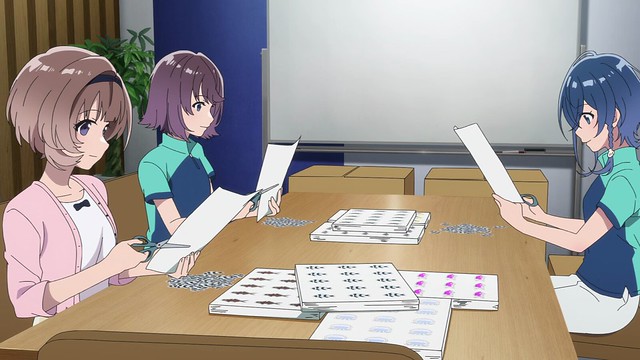 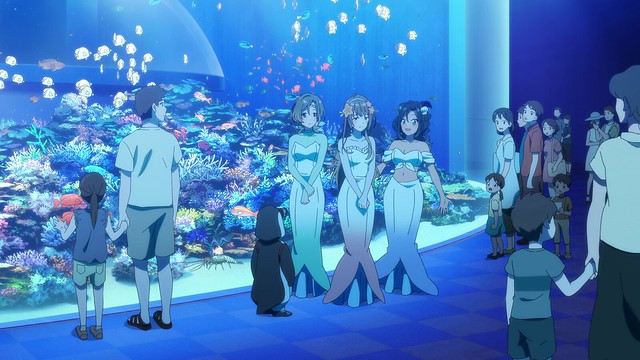 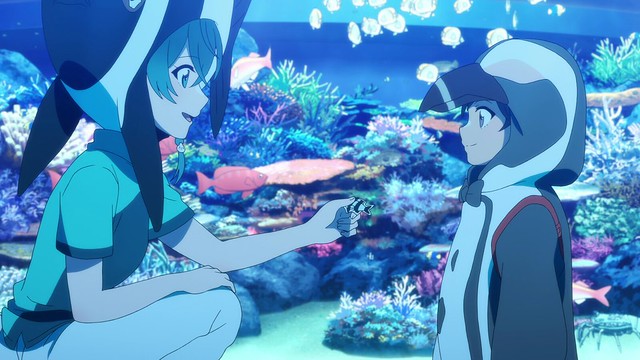 The reason why I am confident that only a handful of conflicts remain to be resolved, before The Aquatope on White Sand gears up for the storyline that will likely give the anime its main theme, is because P.A. Works has not previously deviated from their modus operandi. While The Aquatope on White Sand has been full of surprises insofar, P.A. Works’ strongest anime have traditionally followed a very similar pattern. Once Ohana figures out life at Kissuisō in Hanasaku Iroha, Sui announces she’s closing it, leaving the staff determined to go out with a bang for one another’s sake. Sakura Quest sees Yoshino putting in everything she’s got in making the Mizuchi Festival a success as her year-long contract comes to an end. Hikari and his friends are determined to rescue Manaka from the wrath of the sea gods with another Ofunehiki festival after coming to terms with their own conflicts and unspoken feelings during Nagi no Asukara. We are now at a point in The Aquatope of White Sand where something similar is about to happen, and while I cannot speculate on any specifics, it is evident that this anime will present one final event that brings all of the characters, even Tetsuji, together as they work together in order to accomplish a goal, one that was chosen to convey the series’ main theme. The lingering question now is whether or not The Aquatope on White Sand will being back the kijimuna and visions spotted at Gama Gama: in this second half, the supernatural has all but taken a backseat as the series focused entirely on Kukuru and Fūka adjust to their new workplace and support one another, as well as those around them. As heartwarming and uplifting this may be, stories don’t typically introduce an element unless it has relevance to the narrative. Consequently, with two critical pieces still having to make an appearance yet, I am curious to see what sorts of challenges and surprises will unfold as The Aquatope on White Sand enters its final quarter. While it is possible these elements could be completely discarded, I would prefer to think that P.A. Works has learnt from the aberration that was Glasslip; The World in Colours has shown P.A. Works can incorporate magic and the supernatural in a seamless fashion into their worlds, so I am hoping that for The Aquatope on White Sand, elements that were briefly touched on in the series’ first half can be interwoven into the second half’s narrative in a complete, coherent fashion to really augment the messages this anime is striving to convey.

14 responses to “The Aquatope on White Sand: Review and Impressions At The ¾ Mark”