The Aquatope on White Sand: Review and Impressions After Twenty-One

13 Comments Posted by infinitezenith on November 26, 2021

“When I became a man, I put away childish things, including the fear of childishness and the desire to be very grown up.” –C.S. Lewis

Fūka is surprised to learn that Ruka and members of a film crew will be shooting footage at Tingarla for a nature programme. While Fūka is initially reluctant to be shonw on TV, after overhearing that Ruka is having a bit of trouble with her career, as well as learning that Ruka is facing harassment from her fans, she decides to help out with the filming. Although things go smoothly, the crew are hoping to capture the moment on film, when the juvenile penguin takes to the water for the first time. When Ruka butchers a take, Fūka decides to take Ruka aside for a quick break, where she gives Ruka her old high heels. It turns out that Fūka had wanted to wear them on stage for a performance, but never had the chance to. Rather than discard them, Fūka hopes that Ruka will take them as a keepsake to encourage her onwards. Returning to the penguin enclosure, Fūka gently nudges the penguin forward, and Ruka is impressed with how far Fūka has come as a person. Meanwhile, Kukuru struggles with the work Tetsuji has assigned her. When she learns about a dolphin that has taken up residence in a nearby bay, she hastens to take a look, and encounters her grandfather here. Kukuru learns that Gama Gama is scheduled for demolitions as well. While Kukuru attempts to put together a proposal to a prospective client, a wedding planner, the proposal ends up failing as a result of her lack of preparation. Tetsuji indicates that this is a valuable learning experience, but after Kukuru learns she’d missed the attendant’s dive to check up on the dolphin, as well as Airi’s visit of Tingarla, she begins to wonder what her efforts were for. She decides to visit Gama Gama and is visibly saddened to see that crews have already begun tearing the old aquarium down. The next day, Kukuru fails to show up for work, worrying Fūka and Karin. It turns out Kukuru had wanted a break, and took an unsanctioned break: Karin and Fūka attempt to smooth things over, while Kukuru runs into Misaki, Umi-yan’s wife. The two help clear the beach of garbage ahead of the sea turtles’ hatching. Back at Tingarla, Fūka deals with the aftermath of a penguin fight, and becomes thoroughly irritated after trying to speak to Tetsuji about Kukuru. Having had some time to regroup, Kukuru decides to visit the Kamehausu, a local aquarium whose manager also trained under her grandfather. When the sea turtles begin hatching later, Kukuru attends alongside Kamehausu’s manager and Misaki. She’s surprised to find Fūka here, as well. At this point in time, we are now three episodes out from wrapping up The Aquatope on White Sand: of late, the story has shifted away from the supernatural to focus entirely on the workplace.

While The Aquatope on White Sand indicates that Fūka has settled into her role, Kukuru continues to struggle to find her place in the sun, and while she’s had several wins so far, she’d pulled through on raw determination and spirit alone. This approach has its limits, and the timing of Gama Gama’s demolition, the arrival of a dolphin in a nearby bay, and the fact that Kukuru has missed Airi’s visit at Tingarla, because she’d had a scheduling conflict with her botched proposal to a wedding planning agency, leads her to wonder if she’s giving too much for a job that she’s still wondering about. The sum of these events creates what is known as burnout; Kukuru has been putting her best forward as often as she can manage, but inadequate management, unclear expectations and poor workplace dynamics lead Kukuru’s work-life balance to be thrown out the window. She’d gotten by through her own passion previously, but several coincident events ended up conspiring to completely deplete Kukuru’s motivation. Burnout is a very real problem in the workplace, and although workplace guides suggest that things like practising mindfulness, sleeping and exercising well is a potential means of mitigating it, this doesn’t actually address the root of the issue. In order to develop a viable, long-term solution, Kukuru would need to speak with Tingarla’s director and provide honest feedback so the director is able to work with Kukuru on reaching a compromise of sorts, as well as capitalising on the fact that her coworkers in marketting, especially Akari and Karin, do care for her and would be willing to support her if she’d requested it. Instead, Kukuru’s in-the-moment decision, to go absent without leave, is something that would lead to a reprimand (or even immediate dismissal) in reality. However, there is merit to taking a step back to regroup, as well. By taking time away from her projects, which seem far removed from the aquatic life she loves so dearly, Kukuru is able to gain some perspective and regroup. In Kukuru’s place, I would have pursued a request to take some personal time first, and then schedule a meeting with my supervisor to discuss things. However, we recall that I am a full decade older than Kukuru and have had time to develop professionally. A core part of The Aquatope on White Sand is the fact that Kukuru, despite her intrinsic talents and interests, is still a novice in the workplace. Circumstances lead to her mistakes, but these mistakes provide an invaluable learning experience that will leave her better prepared to handle situations as they come up in the future. 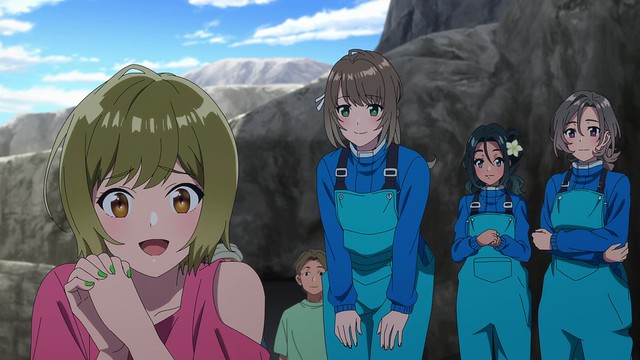 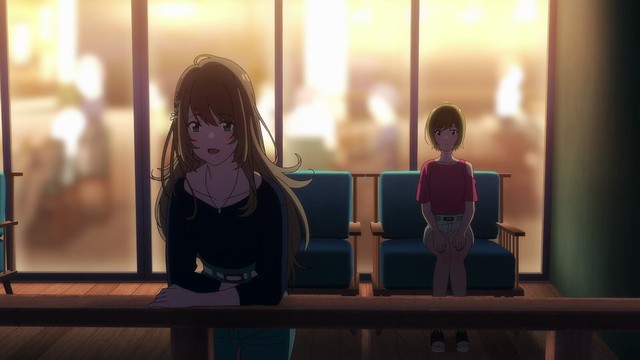 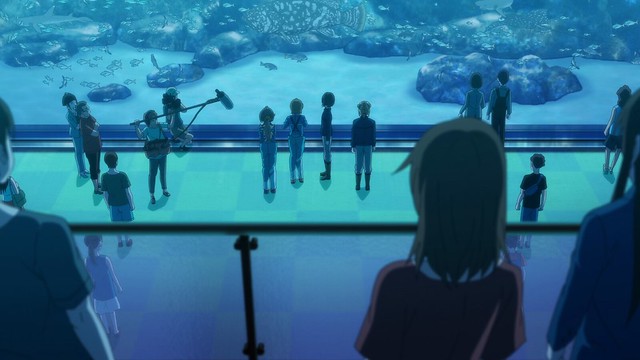 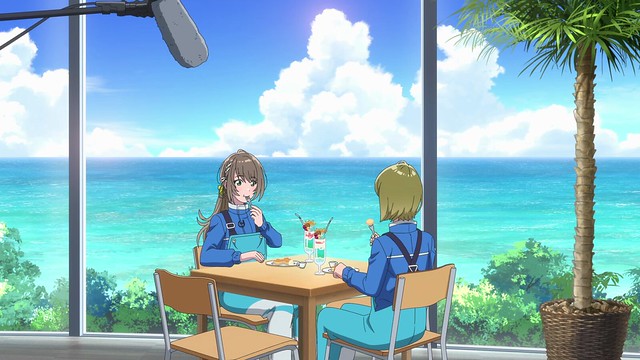 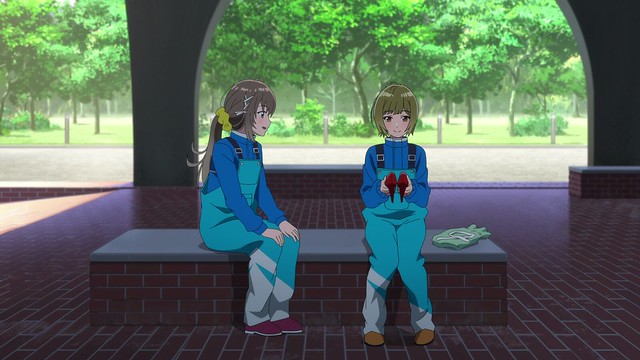 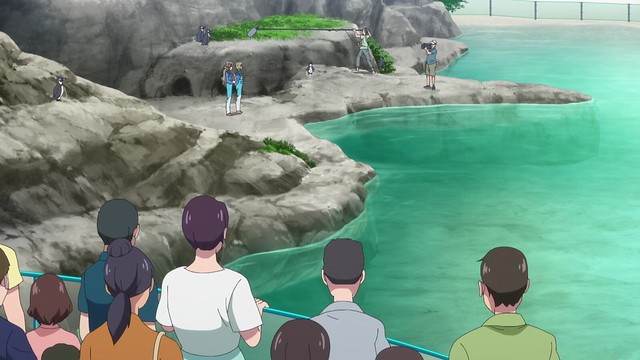 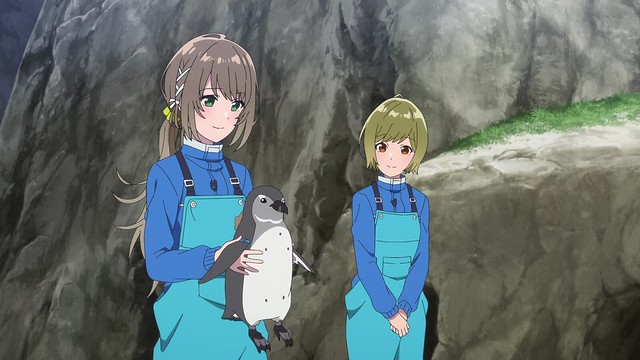 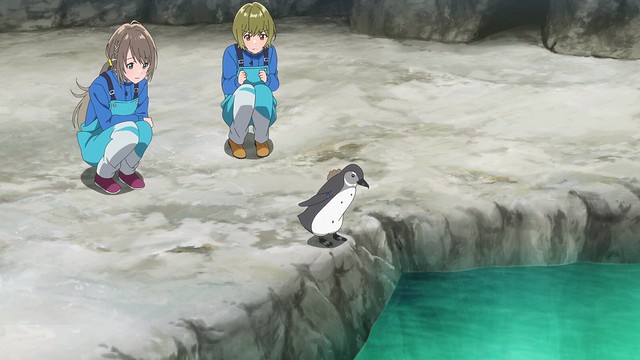 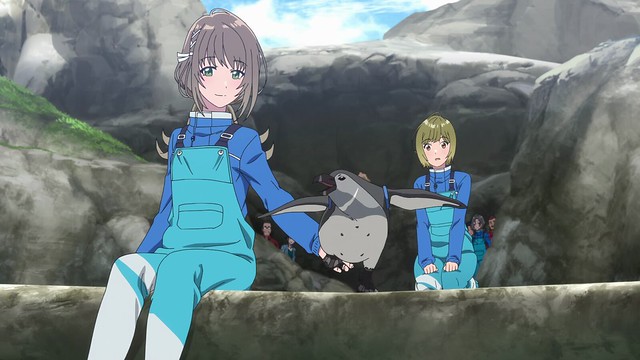 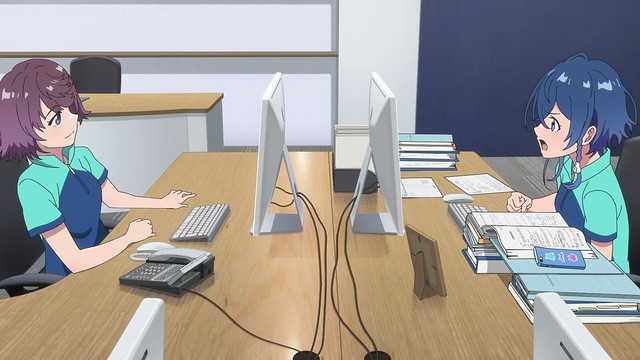 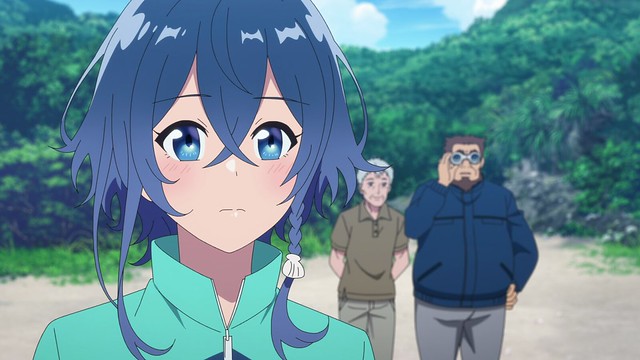 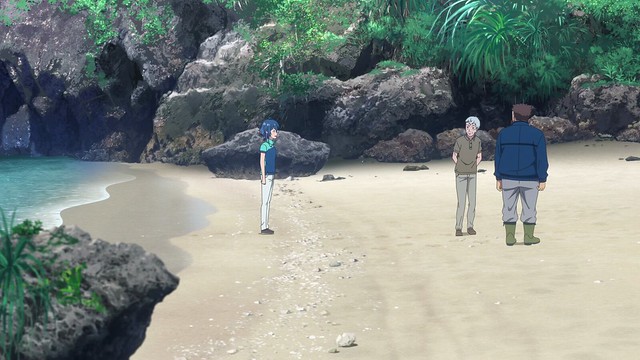 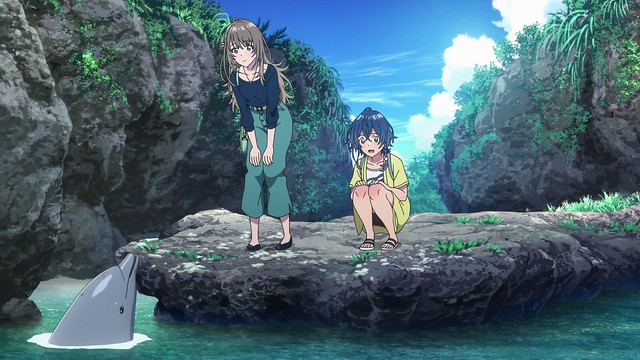 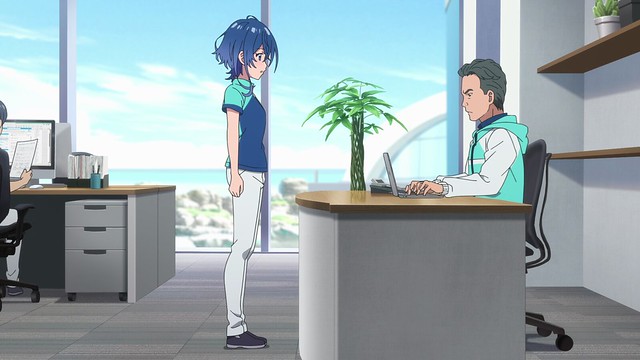 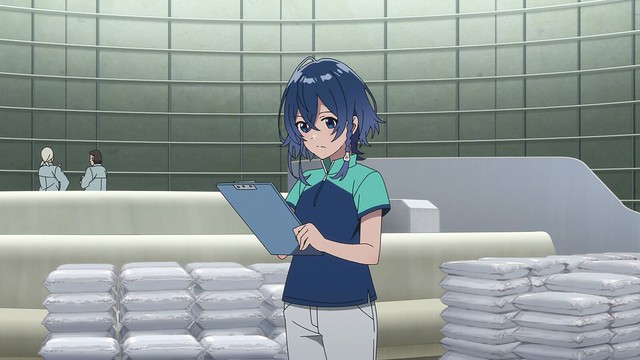 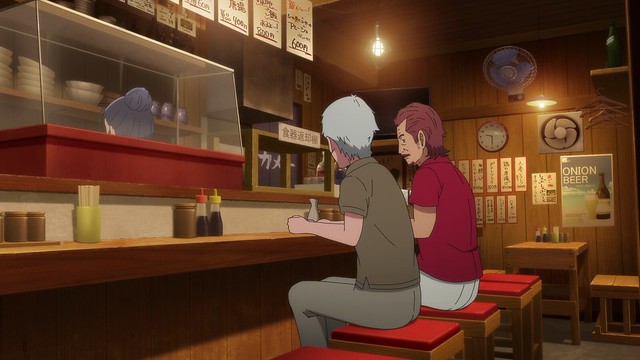 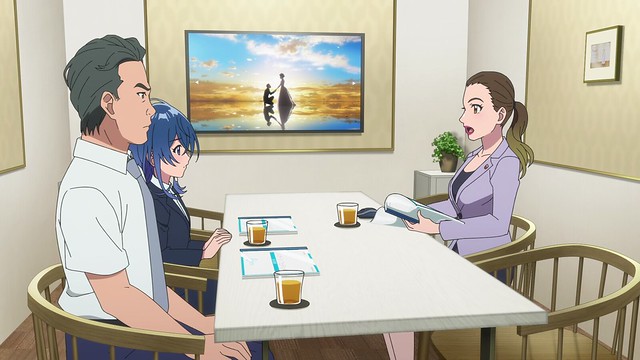 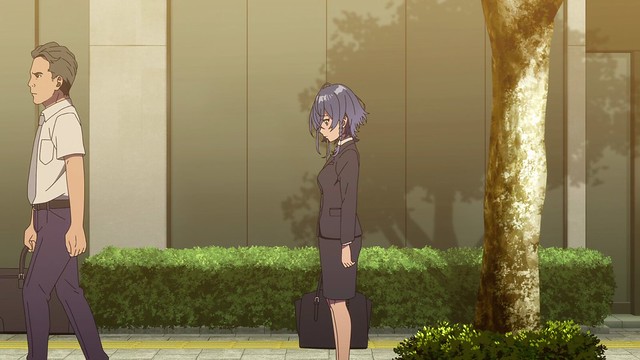 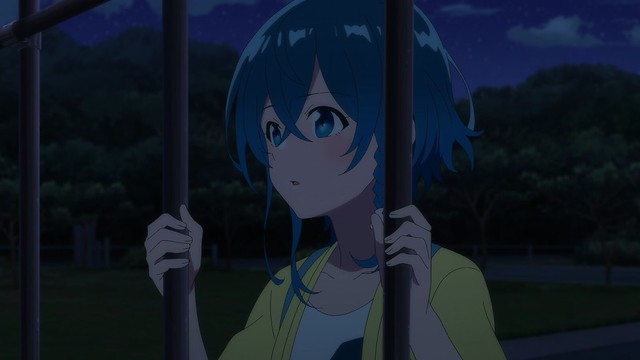 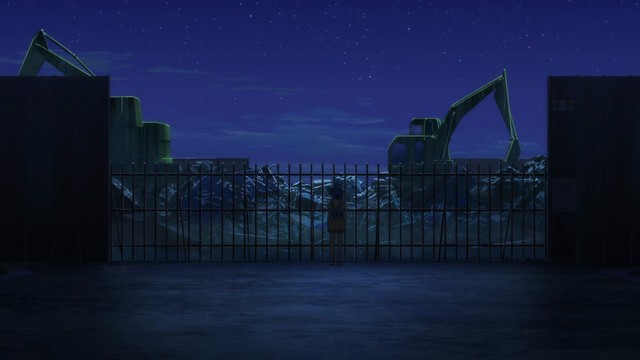 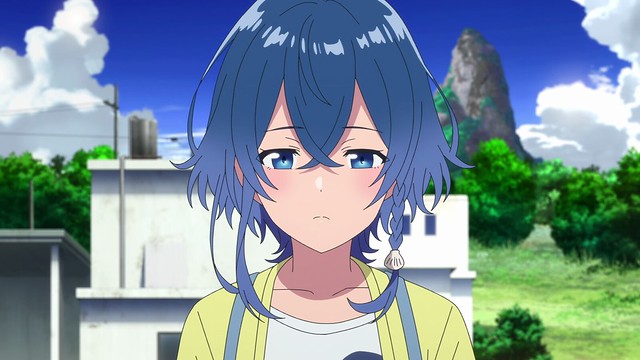 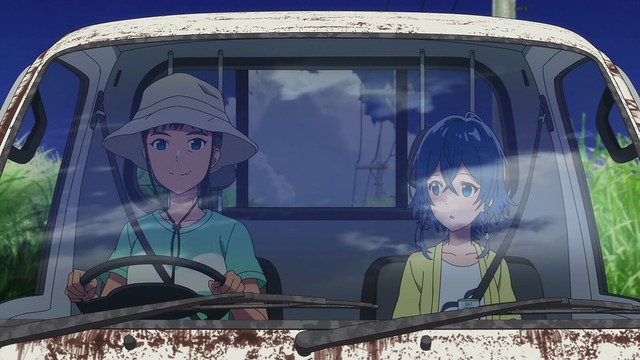 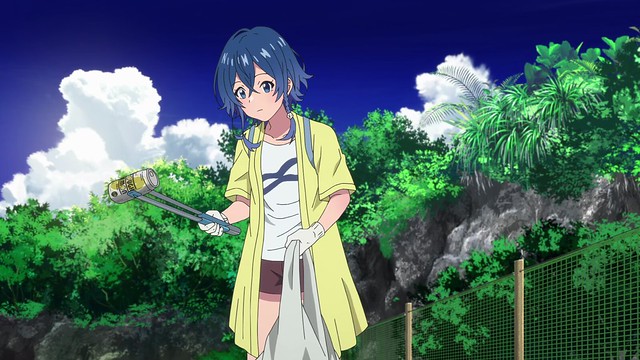 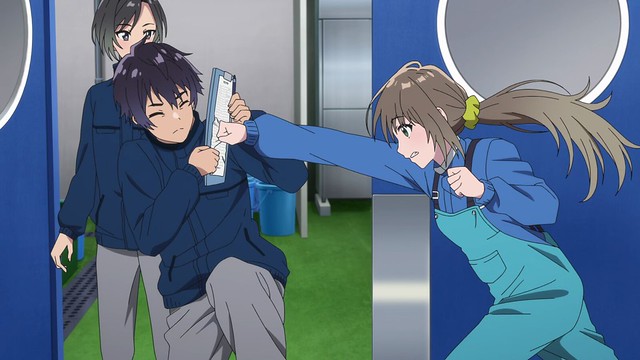 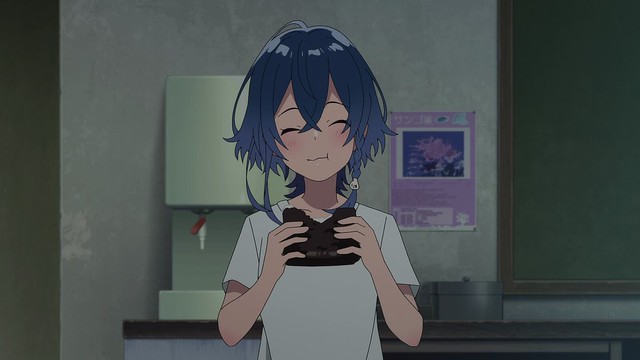 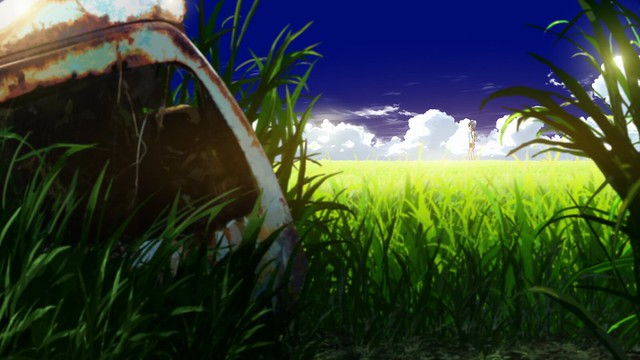 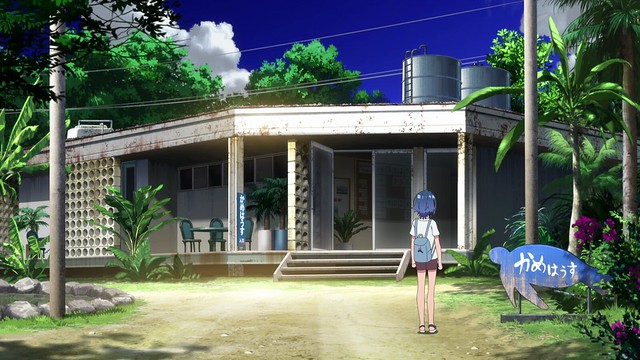 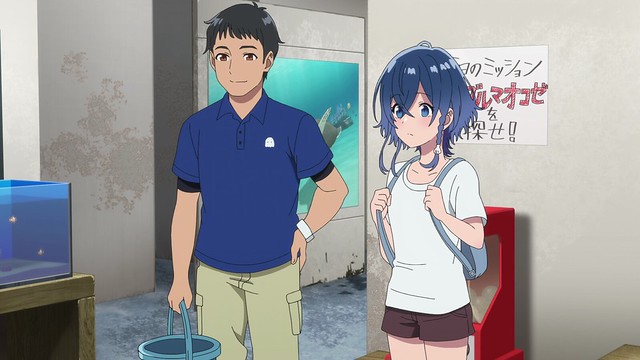 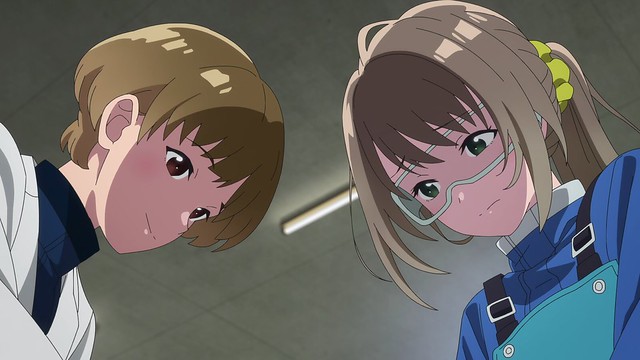 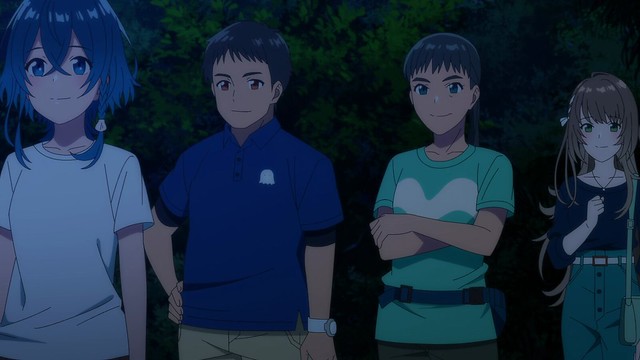 Besides giving Kukuru some breathing room, her excursion also allows The Aquatope on White Sand to really show off what P.A. Works is capable of. Her time with Misaki and the sea turtles shows just how evolved P.A. Works’ craft is: the turtles and penguins are expertly animated and move as their real-world counterparts do. The colours and lighting breathe new life into Okinawa, an already-beautiful locale. The sheer majesty of nature proves to be the tonic that lifts Kukuru’s spirits, and through this trip, Kukuru cannot help but feel amazed at what’s out there. That Fūka joins her for the sea turtles’ hatching further shows that, no matter how their paths deviate, Kukuru will always have someone in her corner. In this area, The Aquatope on White Sand continues to excel. However, with only three episodes remaining, there remains turf that this anime has yet to cover. The visions seen at Gama Gama have not been given any exploration, and similarly, the kijimuna that periodically appeared in The Aquatope on White Sand‘s first half is nowhere to be seen. These developments must now be fitted into the remaining time, which likely will deal with the elephant in the room: Tetsuji and Kukuru will need to reconcile, even partially, if The Aquatope on White Sand is to be consistent in its themes. If the supernatural elements are to be relegated to the background, it will be disappointing, since The Aquatope on White Sand would imply that Corinthians 13:11 is correct. I’ve never believed in the claims that when “one becomes a man, [they necessarily] set aside childish things”. In other words, omitting the magic would suppose the world of adults to be a very dull and monotonous one, devoid of curiosity and exploration. Instead, I’ve found that the gap between an adult and a child is that a child receives magic, and an adult gives it. C.S. Lewis rightly states that Corinthians 13:11 is in fact childish: the desire to appear grown up by setting aside what is “childish” is in and of itself childish. An adult is someone who accepts themselves for who they are, as well as accepting others for who they are. With this in mind, because the magic has faded from prominence in The Aquatope on White Sand in favour for a tale of interpersonal development and professional growth, at the very least, the remainder of the series must sort out the conflicts between Tetsuji and Kukuru. Such messages would naturally be strengthened by the inclusion and return of both the visions at Gama Gama, as well as the kijimuna, and at this point in time, it’s anyone’s guess as to how The Aquatope on White Sand will wrap things up.

13 responses to “The Aquatope on White Sand: Review and Impressions After Twenty-One”