Ready to Return and The Future of the Aquarium: The Aquatope on White Sand Review and Impressions At The Penultimate Episode

8 Comments Posted by infinitezenith on December 10, 2021

Kukuru and Fūka return to Kamehausu to see Misaki off; here, Fūka learns that Misaki’s love of marine biology stems from her desire to conserve marine ecosystems and preserve the beauty of the natural world. The pair subsequently board a ferry back to Okinawa. Kukuru apologises to Tetsuji for her unsanctioned leave of absence, but Tetsuji isn’t concerned about this and asks Kukuru to focus on the wedding project, noting that there is also an open position for an attendant’s position, and he will act as her reference. Despite struggling, Kukuru ends up envisioning a wedding for Fūka and finds herself drawn into the project. Tetsuji reviews Kukuru’s proposal and decides it’s ready, but at Kukuru’s suggestion, they invite the wedding planner, Miura, over to Tingarla. Although Miura is initially reluctant to deem the venue as suitable, after Kukuru suggests that once the expansion area is finished, newly-weds will be able to celebrate their momentous occasion under the sea, amongst the wildlife, Miura completely comes around and accepts their proposal, before taking up Kukuru’s offer to tour Tingarla. With the successful proposal, Tetsuji thanks Kukuru for her hard work. However, Kukuru’s forgotten about Kai, and when she learns Kai’s taking some time off to look after his father, she immediately sets off to meet him. Later, Director Akira announces a special programme that Tingarla will host in two year’s time; to prepare the staff, he will be sending candidates over to Hawaii for a two-year course. While Fūka is curious to try it, she’s also conflicted because of her desire to be with Kukuru. Nonetheless, she works hard to prepare for the selection process, while Kukuru speaks with Director Akira and learns that Tetsuji had once been working in finance and was sorting out a situation where another aquarium had folded. The animals had suffered, and since then, Tetsuji chose to take a more active role in doing his best to prevent such an incident from repeating. Realising that she has the potential to continue supporting marine life while broadening her horizons, Kukuru decides to remain in marketting. On the day of the selection, Fūka gives a presentation about bottlenose dolphins at the inlet, drawing the interest of several families here. During review, the staff agree that while Fūka might lack the technical experience of the other candidates, her ability to communicate makes her valuable. Fūka ends up getting a spot in the programme, but confesses to Kukuru that she’d only gotten as far as she did because they were together. Kukuru assures Fūka things will be fine, and in that moment, they find themselves whisked into the midst of another vision. We’re now down to the penultimate episode of The Aquatope on White Sand, and it is here where things are beginning to reach their conclusion; a fateful meeting sends both Fūka and Kukuru on a trajectory that they’ve walked together, but to advance further, they will need to make a decision on what their futures entail.

Here at the twenty-third episode, a particularly bumpy chapter for Kukuru draws to a close once she’s had a chance to regroup and gain some perspective; in particular, visiting Kamehausu and speaking with Misaki allows Kukuru to appreciate that her love for marine life is an immeasurably broad, and moreover, there is more than one way to express this love. Previously, Kukuru had believed that she necessarily needed to be at the frontlines, physically handling the animals and directly communicating this to others, much as she had done at Gama Gama. However, by speaking with others, Kukuru learns that the entire staff of an aquarium, from the administrative staff to the attendants, all care for about their charges in their own manner, and all of these approaches are equally important towards the end goal of promoting awareness in the importance of maintaining sustainable relationships with marine ecosystems and preserving the wildlife’s health. Tingarla, being a particularly large and well-funded institution, draws upon both revenue and government funding to keep its doors open; while hosting weddings might have seemed far removed from the goal of raising awareness for ocean life, from a different point of view, celebrating an event as significant as a union can mean being mindful of the world’s natural wonders every time a couple puts on their wedding rings, and this tie to the ocean is a constant reminder that humanity is a part of nature. While Kukuru struggles with this, it is ultimately the sum of her experiences that lead her to this conclusion. In this way, Kukuru is pursuing her dreams in a practical fashion; yes, she loves the animals and greatly enjoys tending to their well-being, but at the same time, being able to work in a position where she can positively influence an entire institution and its staff is just as impactful. If Kukuru is successful in a proposal or an event, increased visitor count would drive more revenue, increasing Tingarla’s operating budget. This in turn would allow for more researchers to be hired, better equipment to be utilised in keeping the animals healthy, and even fuel an increased scale of operations. While she may have not immediately spotted this early on, Kukuru’s experiences have allowed her to grow as a person. No longer constrained by her old desires, Kukuru has found a path that allows her to contribute to her dreams in ways she previously did not think possible; in the process, Kukuru learns that the gap between a child and an adult is simply that while the child receives magic, adults create magic for children and are permitted to find magic of their own, as well. 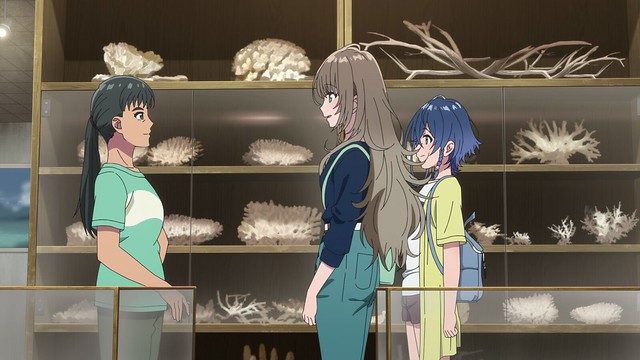 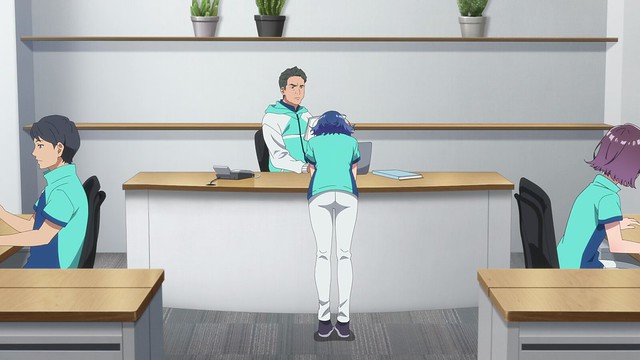 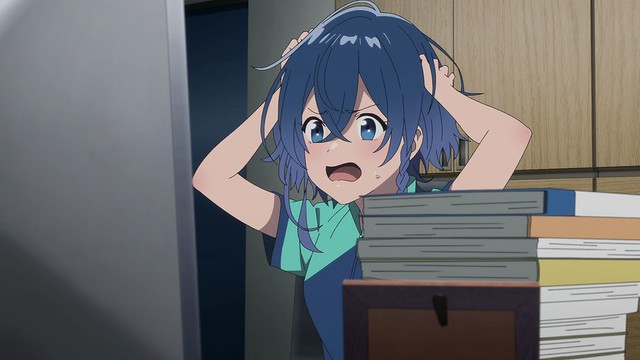 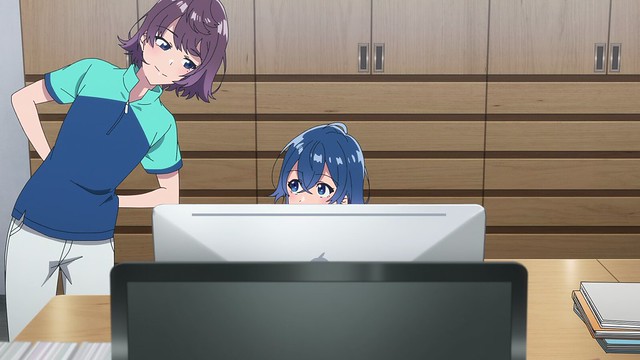 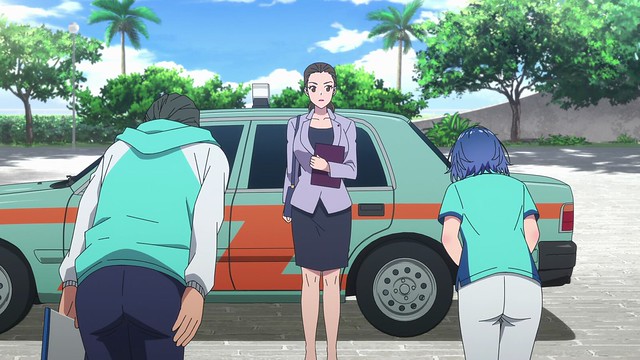 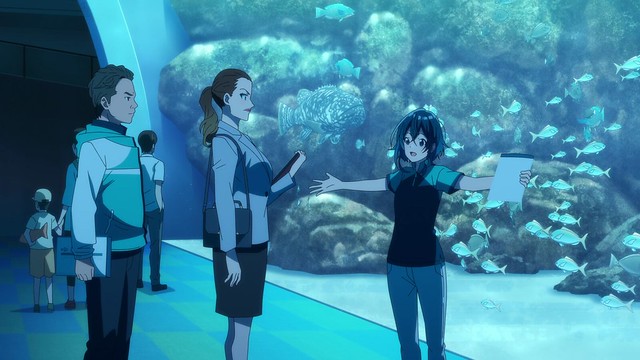 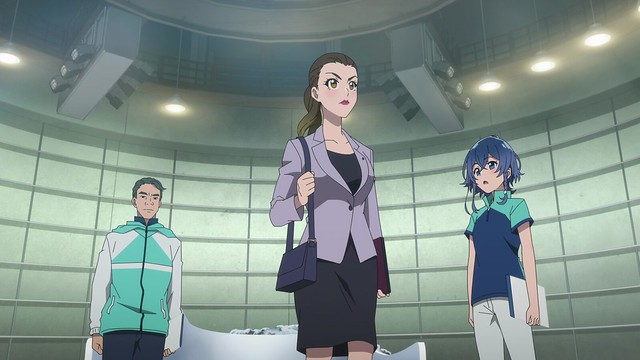 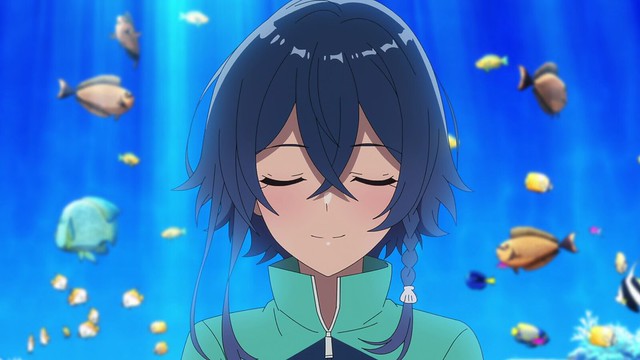 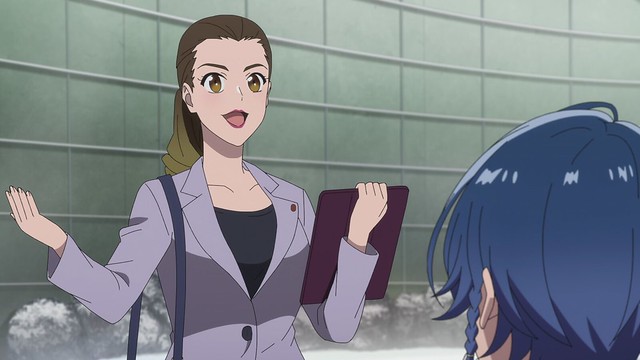 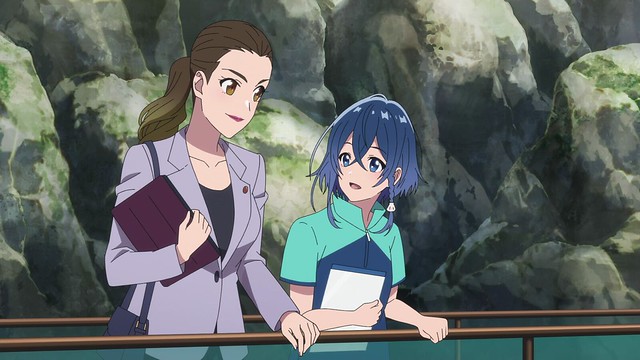 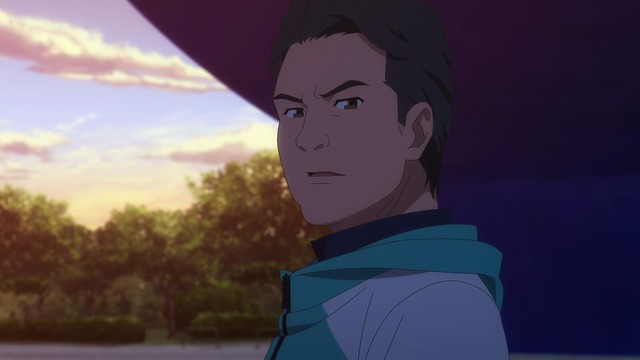 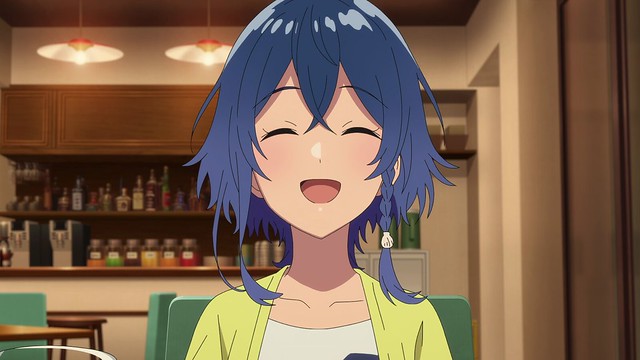 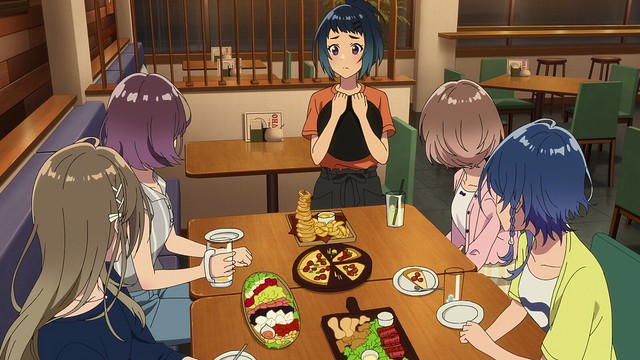 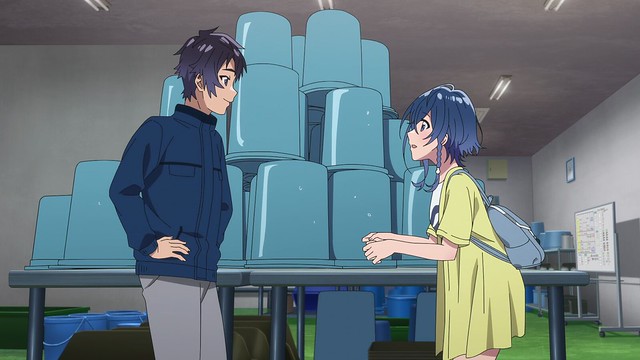 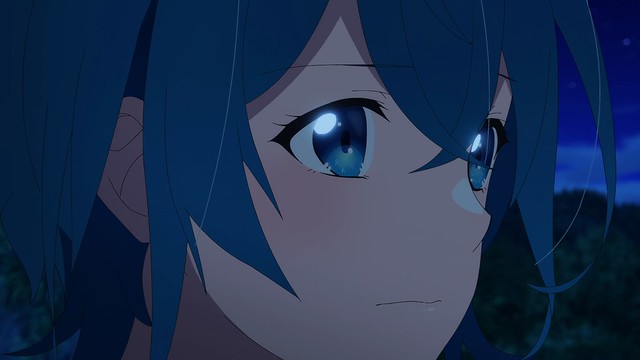 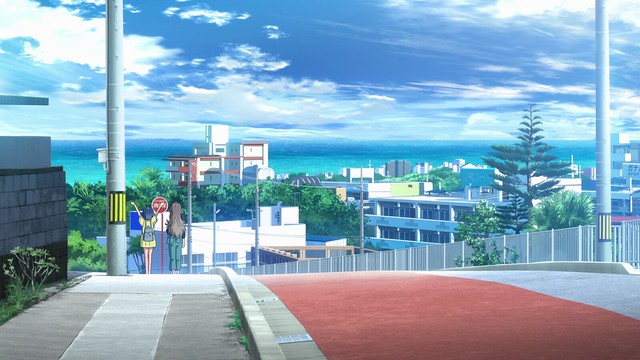 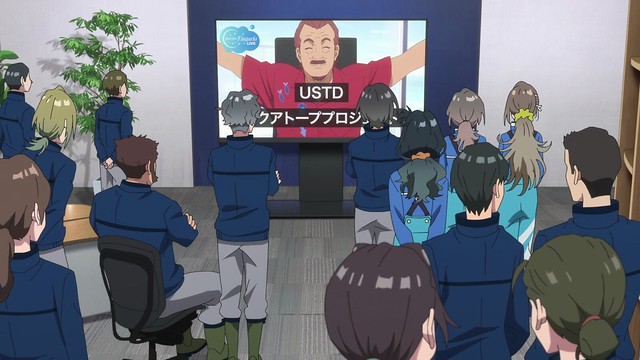 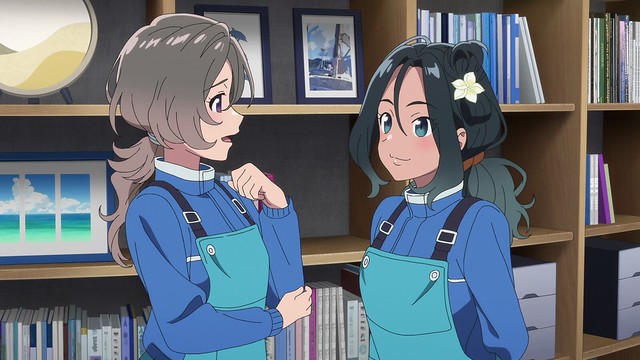 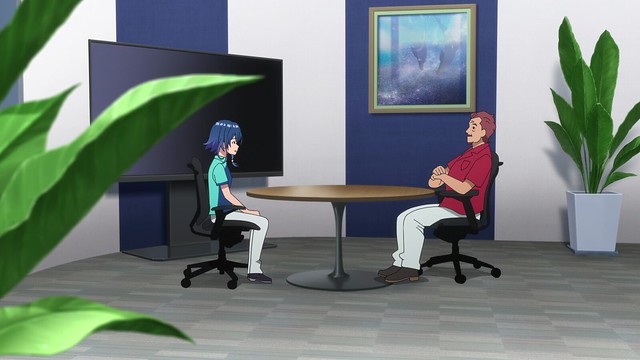 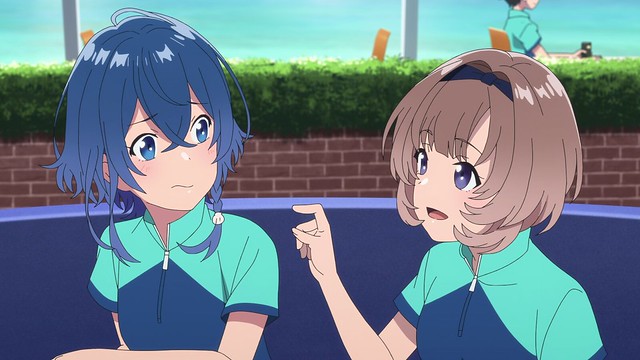 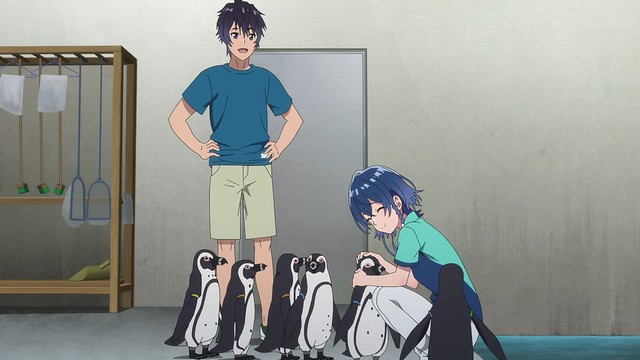 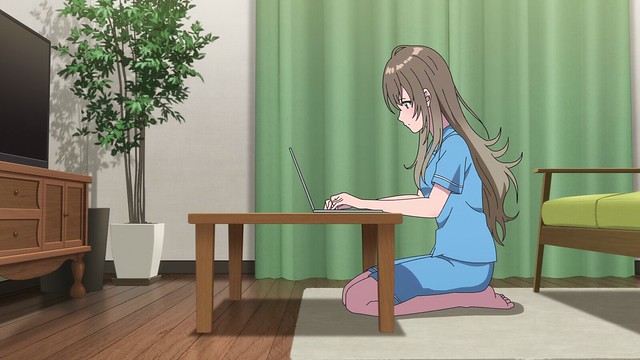 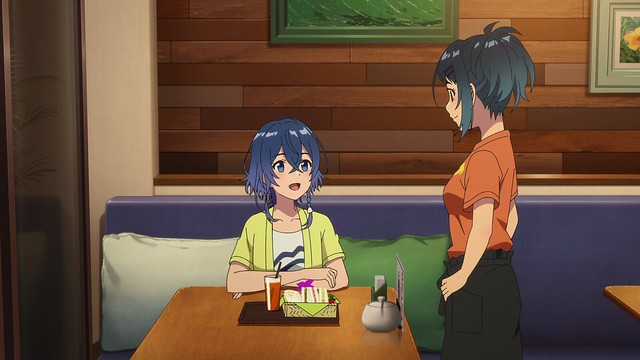 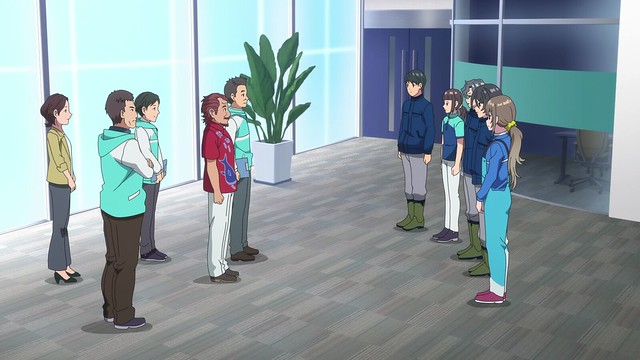 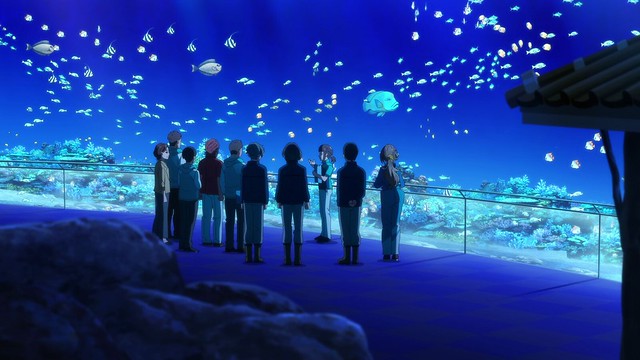 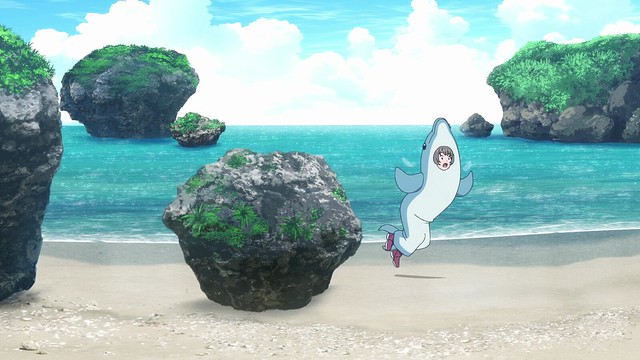 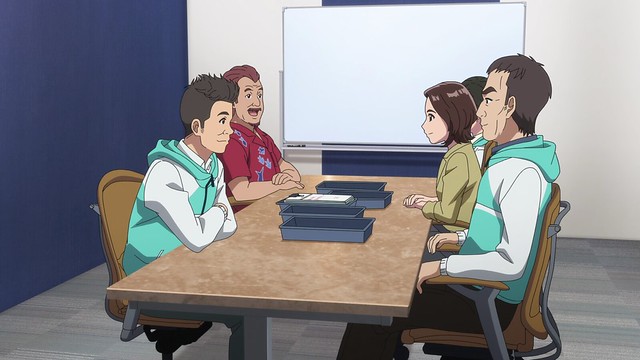 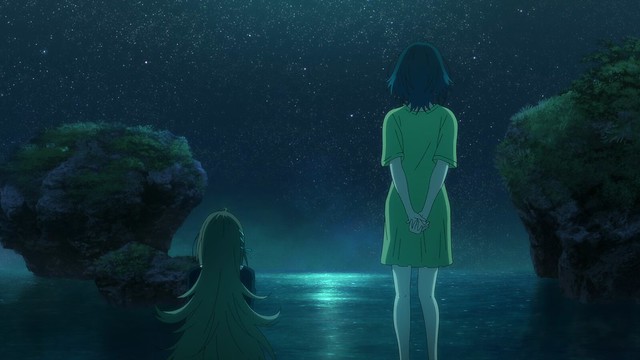 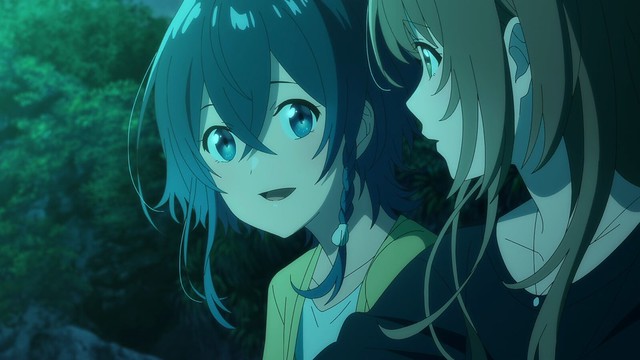 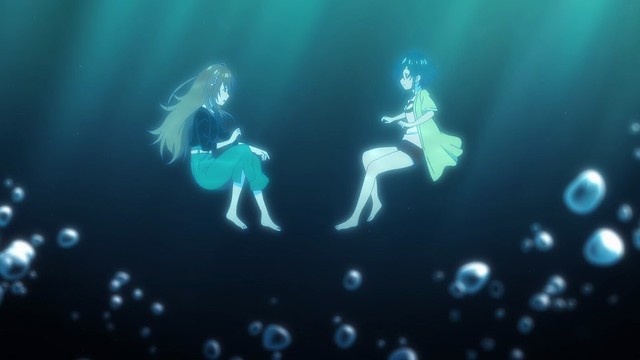 Whereas things have focused on Kukuru towards the end of The Aquatope on White Sand, Fūka’s development has been more subtle. Kukuru is very vociferous about her problems, while Fūka is more apt in compartmentalising things and counting on the presence of those around her to reassure herself that things will be fine. For Fūka, so long as Kukuru is around, she feels as though she’d have the confidence to go ahead and pursue whatever her heart desires. However, after meeting Misaki and learning about the significance of wildlife conservation, Fūka begins to be pulled in a new direction; she empathises with the animals that she’s come to look after every day, and care deeply for the circumstances affecting other members of a species. This in turn fuels her desire to learn more and push her knowledge ever further. Fūka might believe that she has Kukuru to thank for this path and therefore, cannot leave her side, but in reality, Kukuru was only really the catalyst that allowed her to find another path forward. Everything that follows subsequently is a result of Fūka’s own hard work and determination. Moreover, while the time Fūka and Kukuru may spend together is finite, the learnings, experiences and memories resulting from the time they do have will endure. Moving into the finale, it becomes imperative to address this remaining element before things wrap up. Fūka has a wonderful opportunity ahead of her, and she’s evidently demonstrated that she has what it takes to be successful. Both Fūka and Kukuru have made considerable strides since they’d met one another, helping to raise one another up to the point where they are each able to face the future’s challenges. In this final moment, when Fūka wonders if she could ever leave Kukuru’s side, Kukuru smiles and mentions it’s now her turn to be the older sister, assuring Fūka that following her dreams won’t mean they’ll exit one another’s lives. I’ve remained consistently impressed throughout The Aquatope on White Sand, and entering the finale, the only expectation I have is that the series has both Fūka and Kukuru rising out of the ruins of a shattered dream more resilient and knowledgable than before, ready to face whatever lies ahead with not only enthusiasm, but confidence as well.

8 responses to “Ready to Return and The Future of the Aquarium: The Aquatope on White Sand Review and Impressions At The Penultimate Episode”