“We never lose our loved ones. They accompany us; they don’t disappear from our lives. We are merely in different rooms.” –Paulo Coelho

On the first day of school, Koharu is disappointed to learn that she and Hiyori are going to be in different classes, while Hiyori is relieved she’s in the same class as Koi, a friend she’d known since pre-school. After classes end, Hiyori takes Koharu to the fishing shop Koi’s family owns, and picks up an all-in-one fishing kit here. The two later visit a lighthouse that Hiyori’s father had once taken her to, and here, Hiyori gifts the all-in-one fishing kit to Koharu. To get Koharu up to speed with fly fishing, Hiyori arranges for a fishing trip with Koi and her father: the latter is very fond of fishing to the point of occasionally forgetting about his family, and while Koharu is unable to catch anything, she is able to speak to Koi and encourages her to look out for Hiyori in her own way. Later, Hiyori learns that Koharu had lost her mother and younger brother in an accident, and despite having lived with one another for a few weeks, Koharu is a little distant with Hiyori’s mother. To this end, Koharu suggest going on a camping trip together with Koi’s family, too. Here, Hiyori realises that fishing of late’s been considerably more enjoyable, but struggles to find the words to thank Koharu, while Koharu catches her first-ever fish and savours it, before helping out with dinner. During the meal preparations, Koharu finds that she’s able to speak with Hiyori’s mother quite naturally, and Hiyori makes an attempt to know Koharu’s father better, as well. As the evening comes to a close, Koharu and Hiyori stargaze together. When Hiyori wonders if her father would recognise her as she is know, Koharu replies that so long as she smiles, things will be fine. Koharu herself grows excited about the prospect of returning to their campsite in the autumn, when the foliage is painted in hues of oranges and yellows. Here at Slow Loop‘s third episode, it is apparent that family will form the focus of this latest Manga Time Kirara adaptation, with fishing being a secondary aspect that gives the characters common ground to build shared experiences and memories from.

Both the second and third episodes provide exposition into how each of Koharu and Hiyori handled loss; Hiyori sought to understand her father better by continuing to fish, while Koharu pushes herself to be more outgoing and bring joy into the lives of those around her to the best of her ability. When these opposites meet, the end result is a sort of synergy: Hiyori is able to appreciate her father’s hobby more fully, while Koharu ends up being able to share her energy with someone. Unlike Tamayura, which presented things in a much slower and measured manner, Slow Loop‘s portrayal is considerably more spirited in nature; different people respond to loss and grief differently, and Slow Loop sets itself apart by showing viewers both the fact that people are quite resilient, but it is together that one is able to really take those difficult steps forward. The fact that Hiyori and Koharu share quite a bit in common (regarding their backgrounds) means that both are well-placed to help one another out, and I imagine that it is possible that there will come a point in Slow Loop where Hiyori will need to step up and encourage Koharu, as well. The idea of being there for one another, in both good times and the bad, is what makes a family: Koi makes this abundantly clear by saying that what a family outwardly appears to be isn’t the whole picture, and while Slow Loop‘s been quite gentle insofar, Koi’s remarks means that there will be points where Koharu and Hiyori encounter challenges, or even clash. However, in typical Manga Time Kirara spirit, whether it be through introspection or support from others (usually, a combination of both), the relationship that Koharu and Hiyori will come out all the stronger. With these directions in mind, Slow Loop has proven to be unexpectedly mature in its portrayal, and at this point in time, it is evident the series has what it takes to differentiate itself from its precursors. 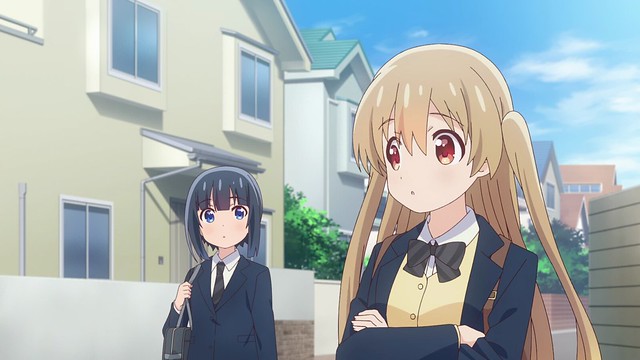 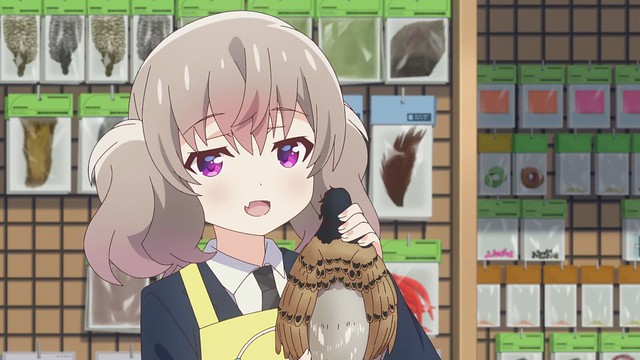 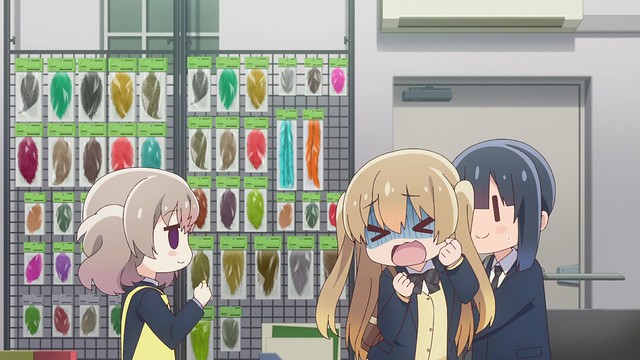 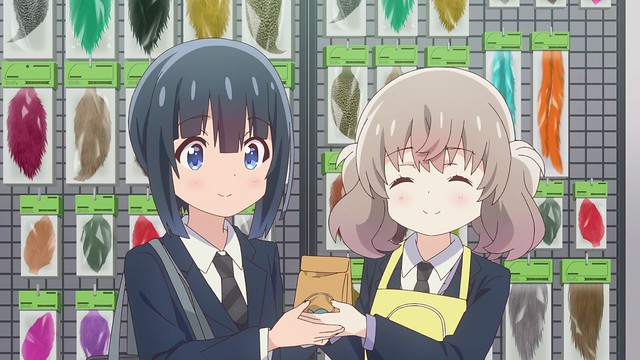 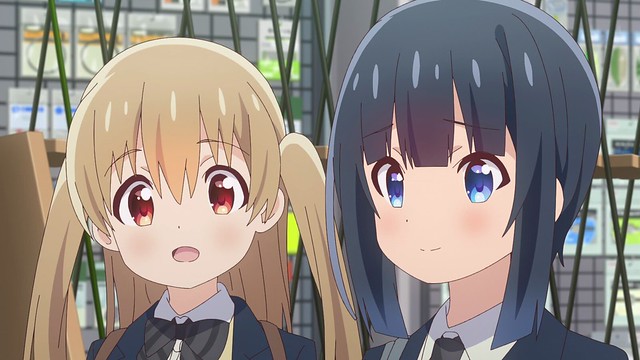 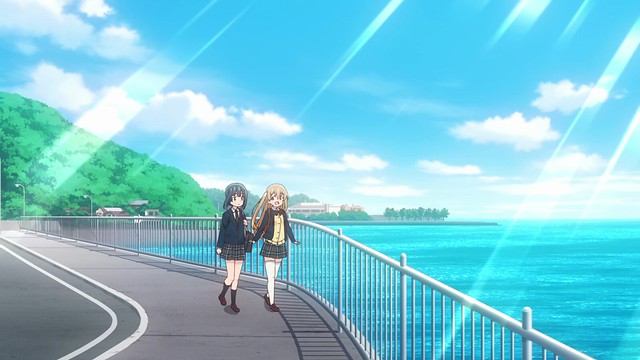 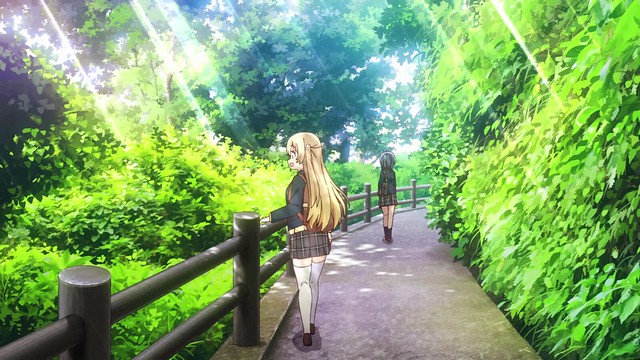 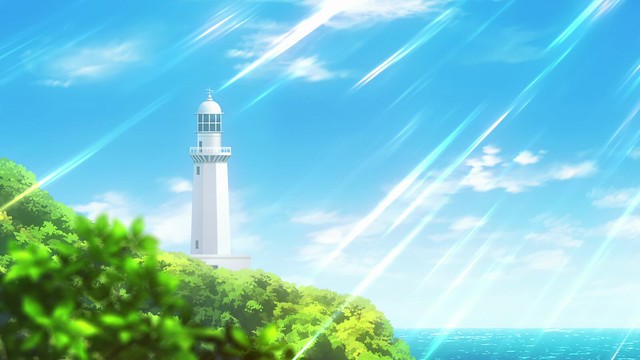 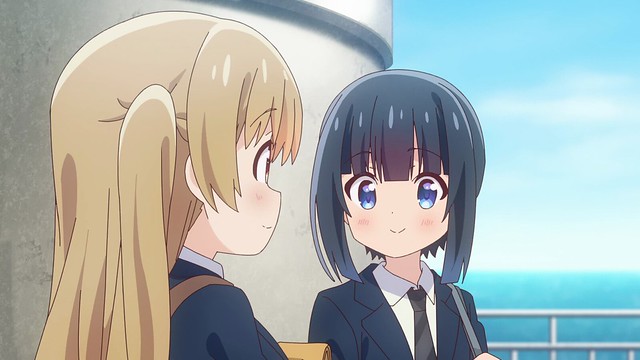 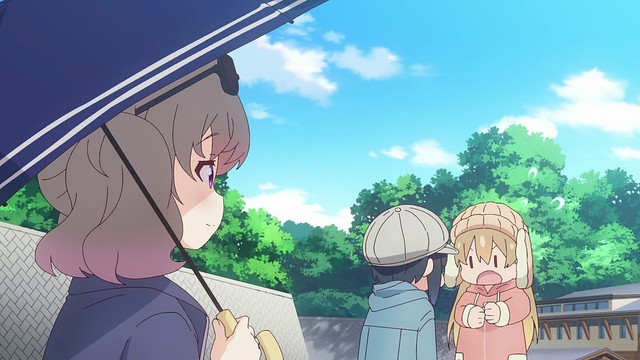 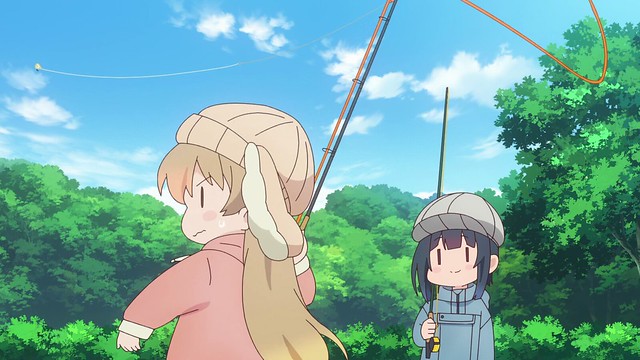 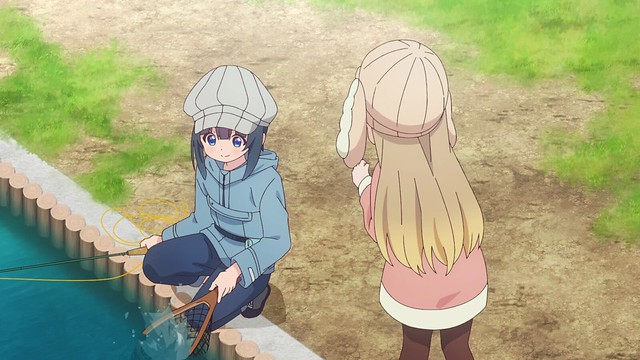 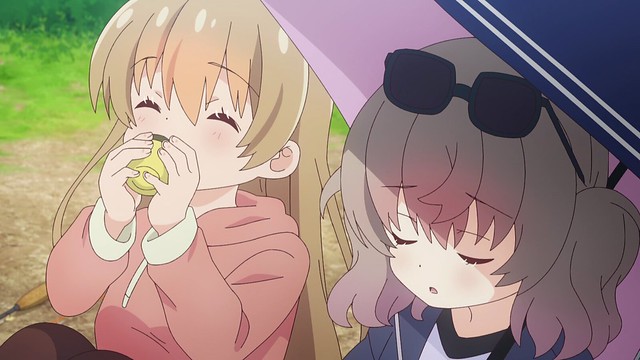 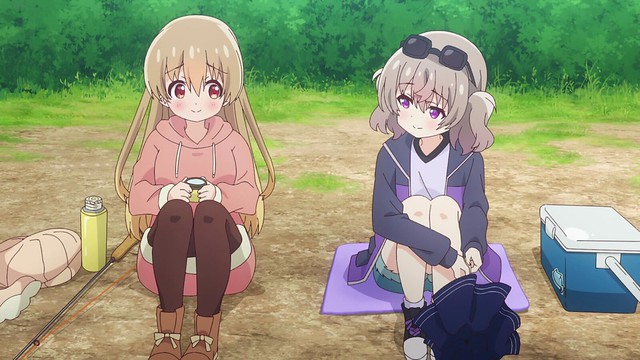 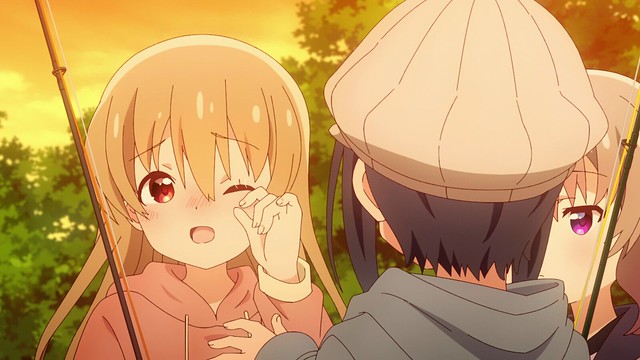 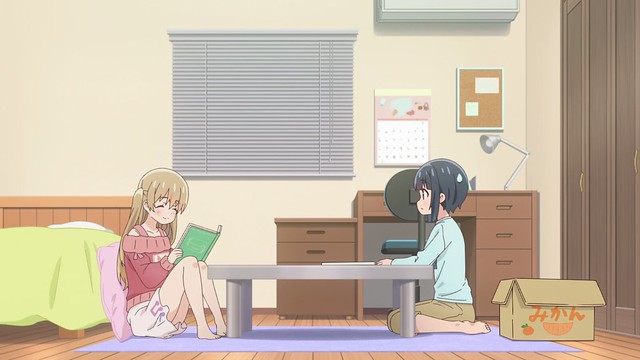 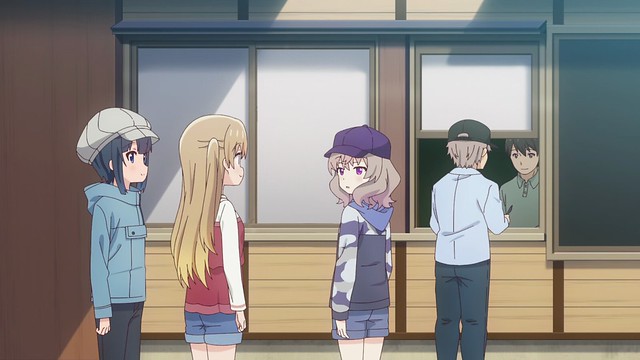 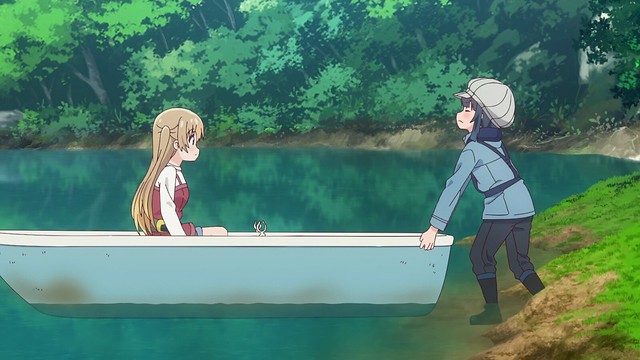 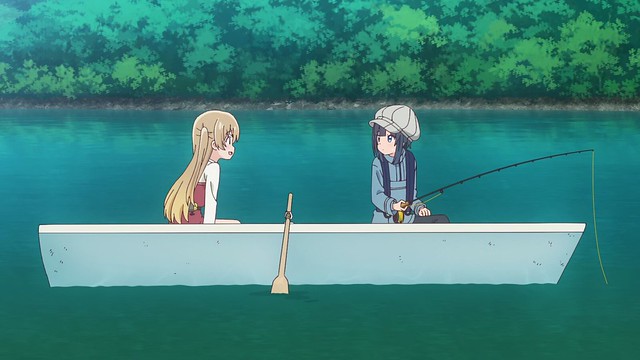 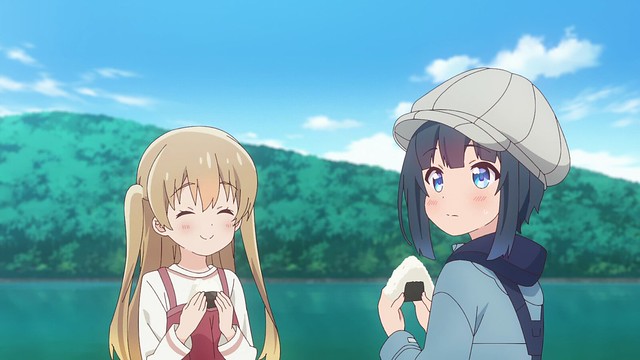 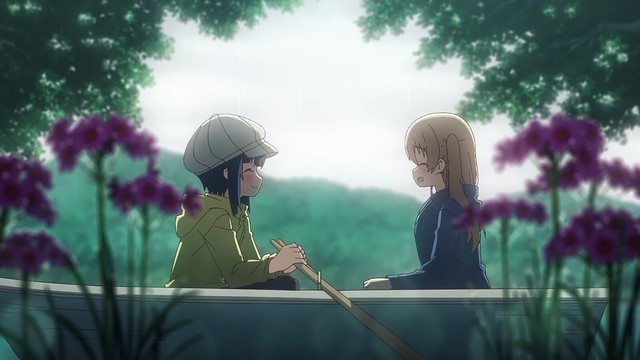 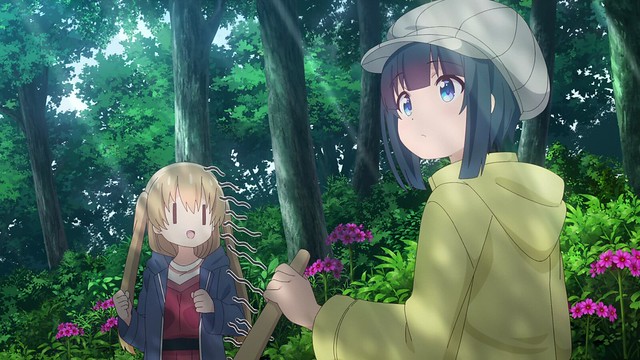 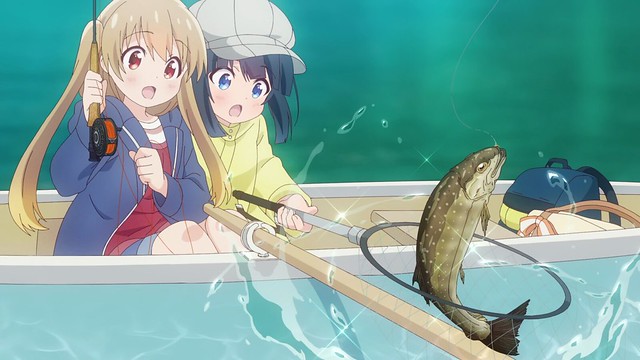 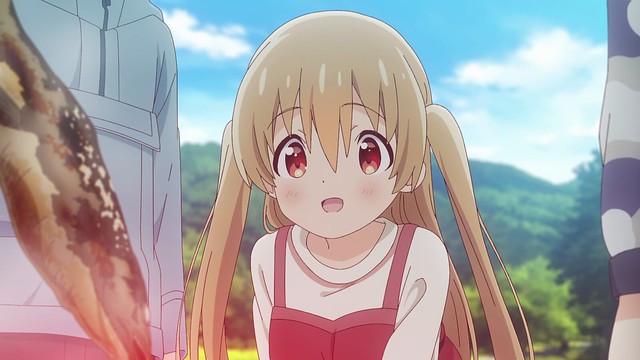 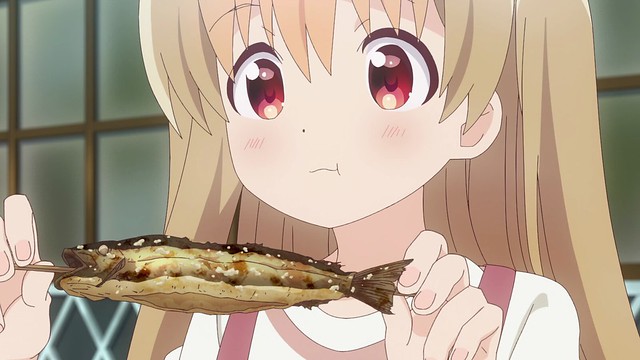 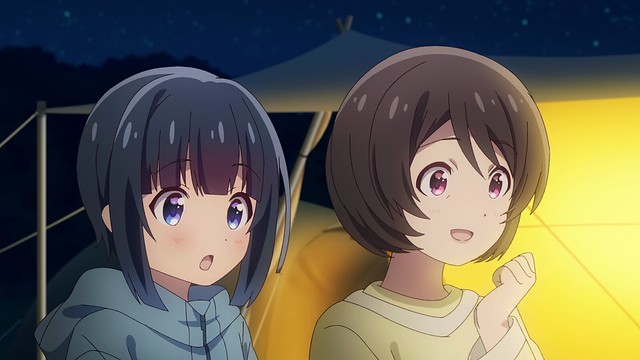 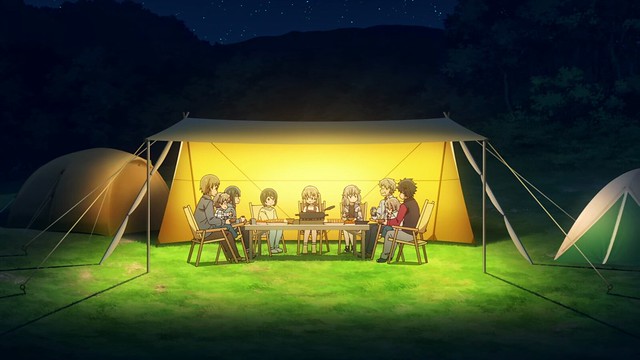 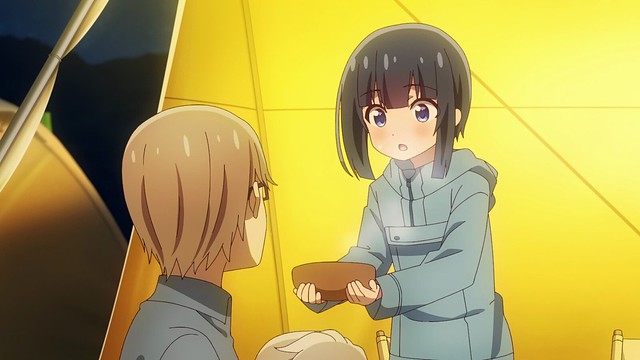 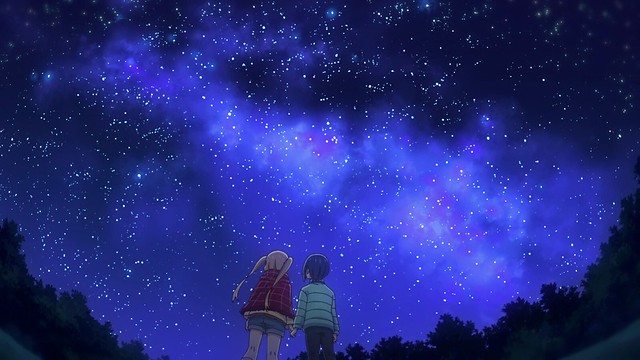 With this being said, Slow Loop‘s incorporation of elements from other slice-of-life series, like Houkago Teibou Nishi, Yuru Camp△, Tamayura and Koisuru Asteroid means presenting to viewers a familiar experience. Whether or not this is a bad thing will depend on the individual: amongst the community, some folks contend that if something is “generic”, it counts as a strike against a given work. For me, this isn’t ever a problem: treading on previously explored territory allows an anime to quickly establish its premise, and this in turn provides more time to focus on what the work intended to convey. In other words, whether or not a work contains derivative elements is irrelevant to me: what matters is how well said work can deliver a relevant, meaningful message. Here in Slow Loop, Hiyori and Koharu’s dynamic had previously been seen in Yuru Camp△‘s Rin and Nadeshiko, while the events forming the backdrop for Slow Loop‘s story is similar to Tamayura‘s. Hence, viewers can reasonably expect that Slow Loop would be a story of opposite personalities coming together to drive individual growth. However, because the setup is quite distinct from those of Yuru Camp△ and Tamayura, Slow Loop provides an opportunity to show something neither of these works focused on: how the combination of Koharu’s cheerful, happy-go-lucky personality and Hiyori’s introspective, quiet traits complement the other in a way as to allow both characters to come to terms with their losses, support one another and ultimately, step forward together. I’ll admit that this was something I wasn’t expecting from Slow Loop based on its synopsis alone, but now that we’ve seen three episodes, I am looking forwards to seeing how this anime explores more challenging topics about handling loss and grief while at the same time, continuing to remind viewers to be appreciative of the smaller things in life, like sharing a meal with loved ones.

22 responses to “Slow Loop: Review and Reflections After Three”