11 Comments Posted by infinitezenith on February 8, 2022

“Soon Master Elf, you will enjoy the fabled hospitality of the Dwarves: roaring fires, malt beer, ripe meat off the bone!” –Gimli

When Chloe visits Kanna in Japan, Tohru and Kobayashi do their best to make sure the pair have a good time. Chloe’s first day in Japan is spent in Tokyo’s Akibahara, where the group are accompanied by Ilulu, Fafnir and Makoto. After stopping by a virtual reality arcade and a capsule store, the group runs into Elma, who takes everyone on a run of several desert shops around Akibahara. The next day, Chloe wonders what an average day for Kanna looks like. When Riko shows up to play with Kanna, the three end up swinging by Kanna and Riko’s elementary school, where Riko teaches Chloe how to swim. The three head on over to Riko’s house, where they play Twister, and end the day after swinging by the candy store where Taketo and Ilulu work. During the evening, Kobayashi invites everyone over to have a party on her apartment complex’s rooftops. While Kobayashi helps her into a yukata, Chloe asks Kobayashi how she came to know so many dragons. Kobayashi remarks that things sort of happened, and that things feel like a homestay, one that she’s come to enjoy very much. After an evening of barbeque and fireworks together, Chloe and Kanna retire for the evening. Chloe remarks that Kobayashi is special for having gotten to know so many dragons, to which Kanna replies that Kobayashi has a soft spot for dragons. In the morning, Chloe prepares for her flight back home to the States, and promises Riko and Kanna she’d like to visit again someday. As Kobayashi and the others watch Chloe’s plane take off, Kobayashi remarks that Chloe had been doing her best to take in everything, leading Tohru to remark that Chloe’s got the heart of a dragon, too. Later, Chloe does a video call with Kanna and Riko and says next time she visits, she’d like to stay for a full month. Kobayashi overhears this and smiles. Miss Kobayashi’s Dragon Maid S‘ OVA was released back in January as a part of the final BD volume, and during its run, serves as a reminder of the craft that Kyoto Animation excels in presenting to viewers: it is simultaneously heartwarming and thought-provoking, utilising its runtime to reintroduce Chloe, who’d befriended Kanna during Miss Kobayashi’s Dragon Maid S‘ main run, and fulfilling her promise of visiting Japan leaves the second season off on a high note.

The Miss Kobayashi’s Dragon Maid S OVA is written to illustrate two different facets of travelling: on Chloe’s first day, Tohru and the others bring her to Akihabara, a district in Tokyo long regarded as the otaku centre of Japan for its neon lights, countless gadgets, anime and manga shops, and a dazzling array of eateries, from maid cafés to sweet shops of the sort that Elma ends up recommending to Chloe and Kanna. This first day is marked by visiting Akihabara’s highlights in a manner reminiscent of how tour groups operate; visitors are taken to the top highlights and experience something that is counted as a quintessential part of the experience. On the second day, Chloe travels in a much more personalised, intimate manner – visiting Kanna and Riko’s school, checking out a Japanese candy store and enjoying a quiet barbeque among friends as locals would. The sort of experiences one gains from the latter is counted as being more authentic, giving Chloe a glimpse into what Kanna’s everyday life is like. Both modes of travel have their merits: one hits iconic destinations and has iconic experiences with the tourist-oriented activities, while enjoying things as locals would provides one with unparalleled immersion into a given culture. That Chloe enjoys both to equal extent is something that Tohru and Kobayashi comment on – the inquisitiveness that Chloe brings to the table is reminiscent to that of a dragon, and in this way, Tohru is suggesting that being a dragon isn’t about possessing superhuman capabilities, but rather, possessing an open mind and a willingness to accept others. Kyoto Animation has always found creative, heartfelt ways of expressing simple truths to viewers through their stories and imagery, and this Miss Kobayashi’s Dragon Maid S OVA is no different: people are at their happiest when they’re broadminded and willing to embrace the fact that others are different than themselves. 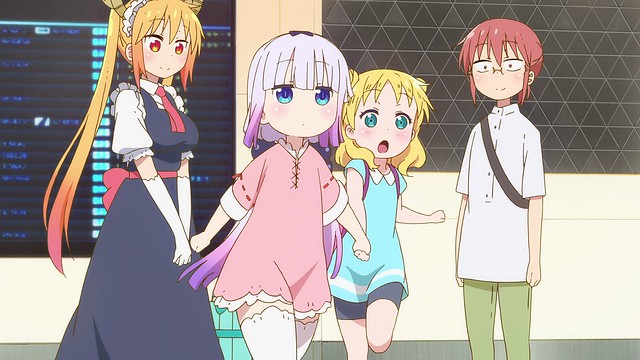 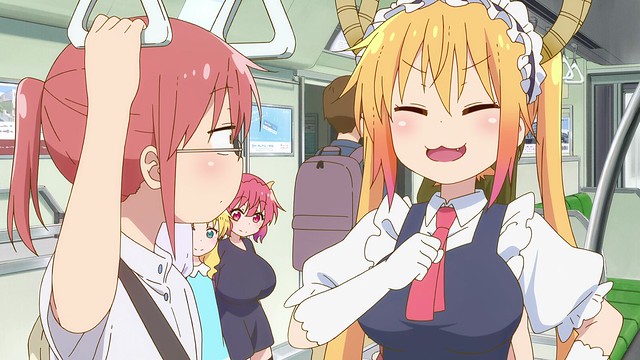 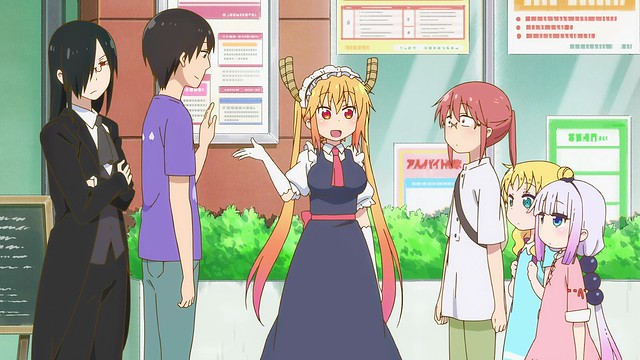 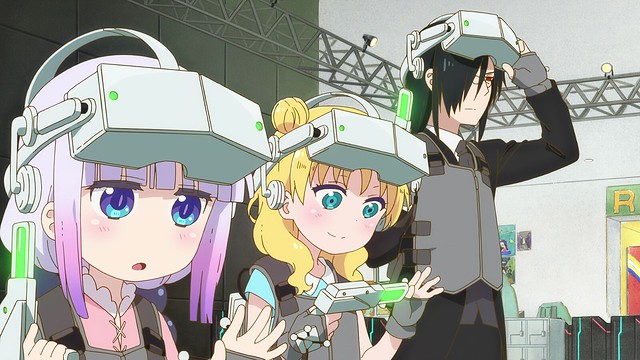 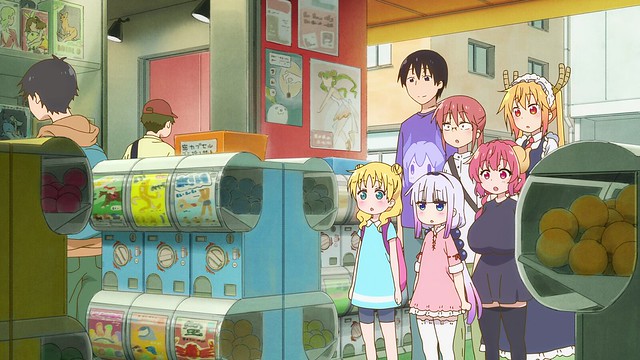 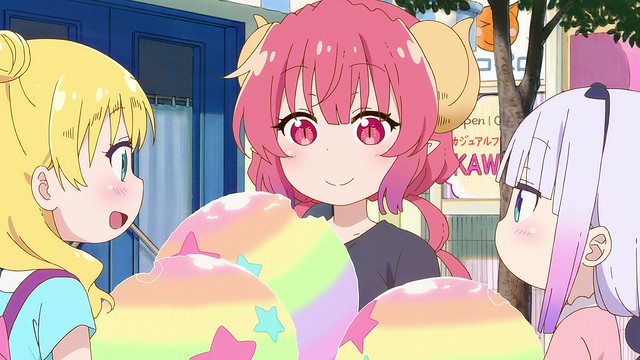 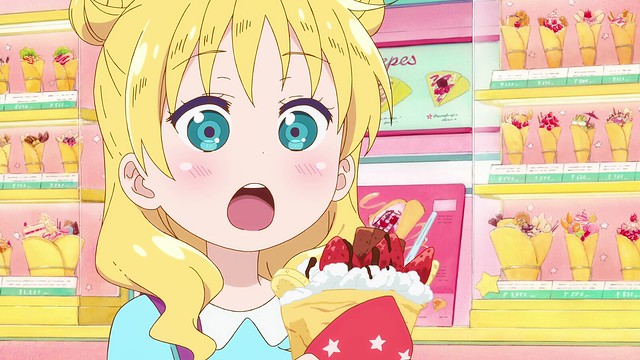 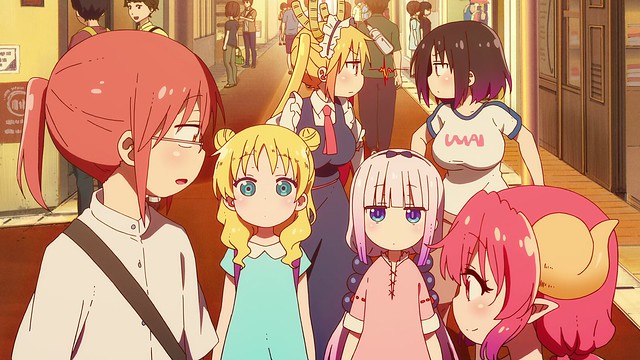 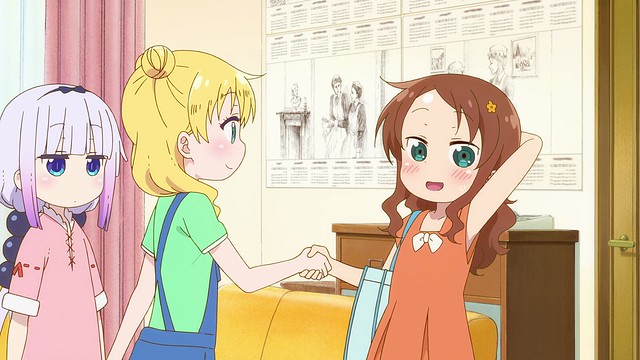 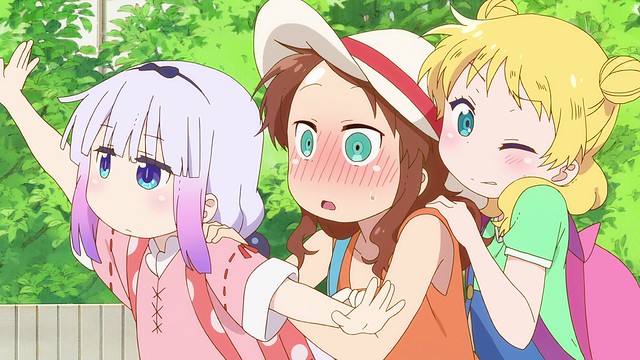 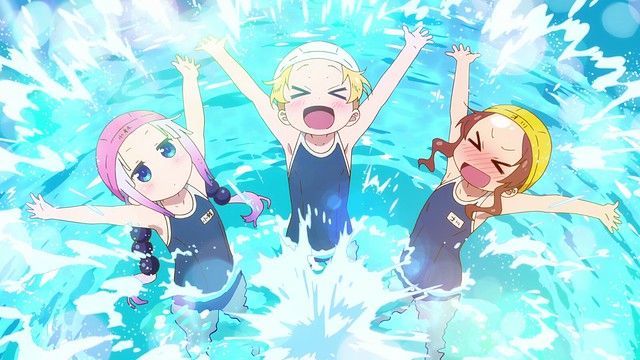 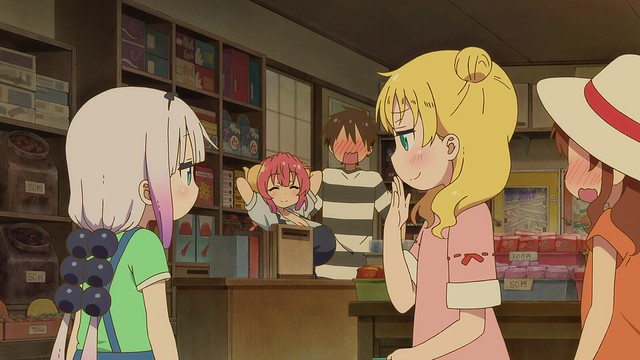 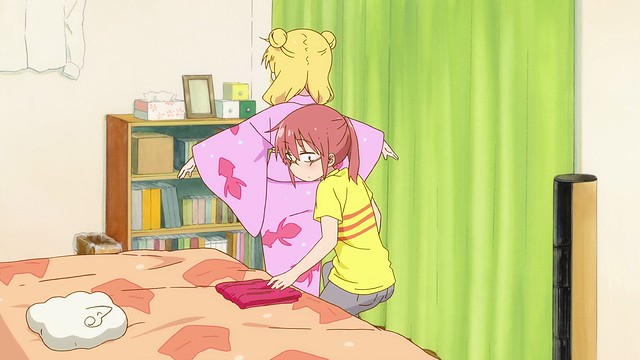 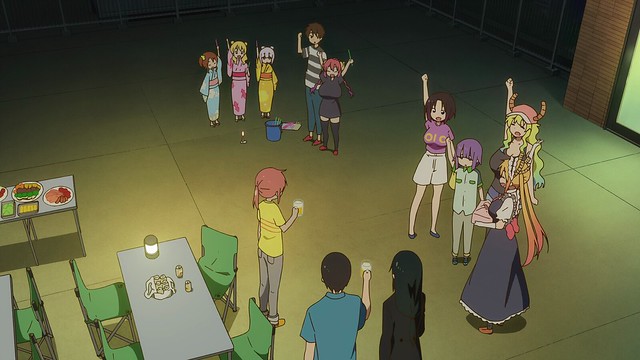 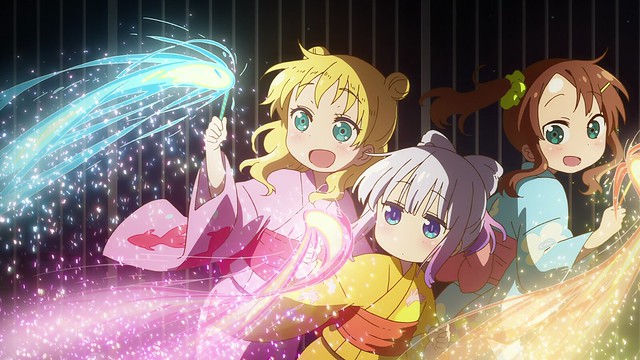 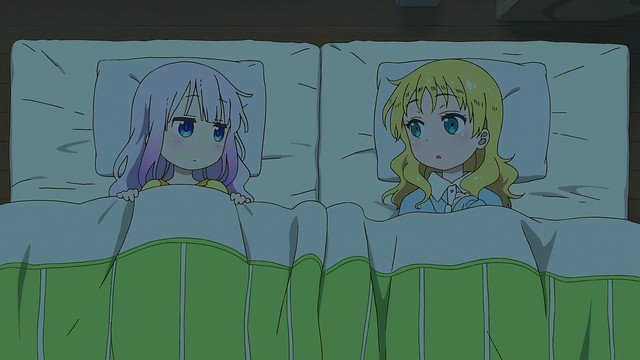 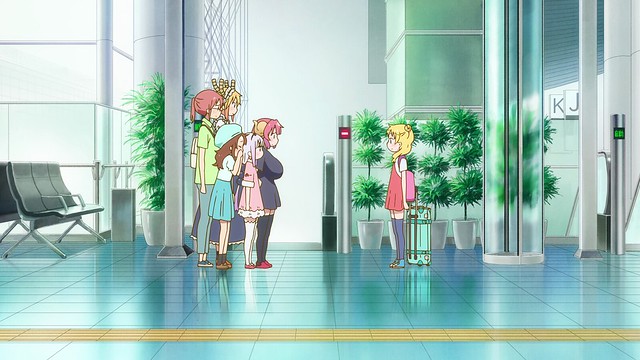 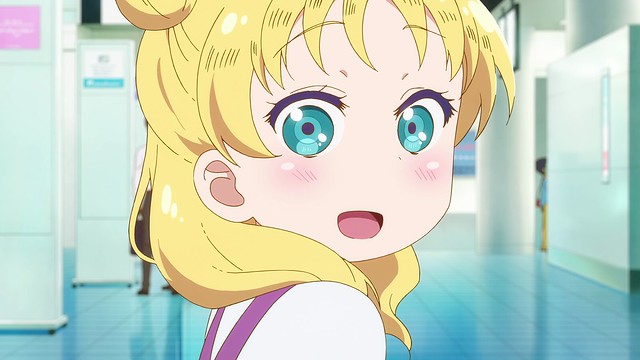 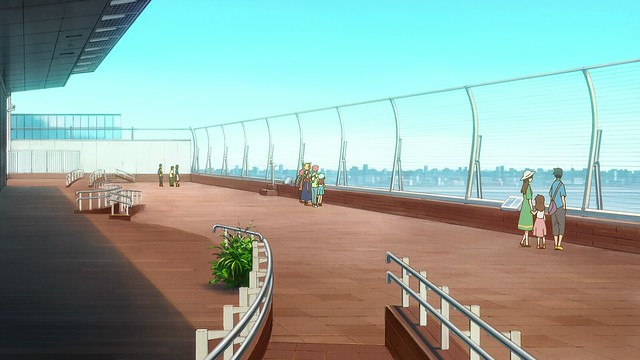 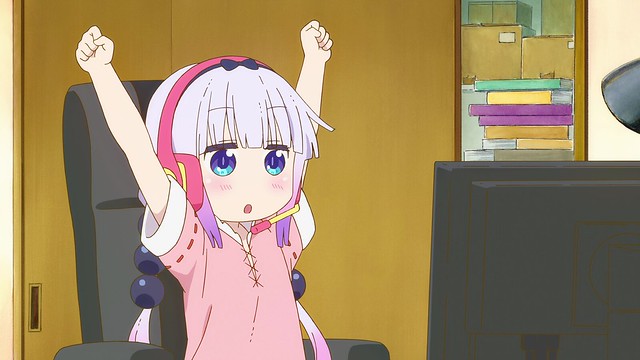 Altogether, Miss Kobayashi’s Dragon Maid S‘ OVA wraps up the second season in an immensely satisfying and conclusive fashion, giving viewers the pleasure of knowing that Chloe was able to fulfil her wish of visiting Japan and seeing what Kanna’s life is like, as well as meeting Kobayashi, who’d come to perceptibly shape Kanna’s world-views and help her mature as a result. Kyoto Animation has always found ways to leave viewers feeling content when their series ended, and this OVA is no exception, speaking to their ability in creating moving, heartwarming stories that have a tangible, positive impact on viewers. With the whole of Miss Kobayashi’s Dragon Maid S now in the books, one does wonder what directions Kyoto Animation will have in the future: their next major project appears to be an anime adaptation of 20 Seiki Denki Mokuroku, a novel that follows Inako Momokawa, a young woman who lives in Meiji-era Kyoto. Her life is a tricky one, but one day, she encounters Kihachi Sakamoto, a man who promises to do away with the old gods and usher in an era of progress, brought on by the introduction of electricity. Such a story immediately fills the mind with wonder, and Kyoto Animation’s previous record has meant that such stories are brought to life in an incredibly visceral, immersive and vibrant manner. Although 20 Seiki Denki Mokuroku‘s status is unknown as a consequence of the 2019 arson at their main office in Kyoto, Kyoto Animation’s indomitable resolve (and the fact that they were able to see both Violet Evergarden: The Movie and Miss Kobayashi’s Dragon Maid S successfully to completion) means that I remain confident that whatever they’ve got awaiting viewers will be another top-tier work: Kyoto Animation has never sacrificed quality for speed, and whether or not their next work is 20 Seiki Denki Mokuroku or something else, I remain more than happy to remain patient as they work on their craft. Miss Kobayashi’s Dragon Maid S was a shining example of the commitment Kyoto Animation’s staff have towards their work, and as their latest OVA shows, the time they spend honing a given work is well worth the wait.