10 Comments Posted by infinitezenith on February 14, 2022

“I don’t mind hidden depths, but I insist that there be a surface.” –James Nicoll

Miho Nishizumi is a a new transfer to Ooarai Girls’ Academy, and looks forward to her high school life here. Although she’s shy and a little clumsy, she quickly befriends the outgoing and cheerful Saori Takebe, and the elegant, refined Hana Isuzu. While Miho had been hoping to take up flower arrangement as her club activity, the Student Council demands that Miho join the school’s newly-resurrected Panzerfahren (sensha-do, literally “way of the tank”, “Tankwando” or “Tankery” depending on the translation) programme, even going as far as threatening Miho with expulsion. Upon seeing the lengths to which her new friends will go for her, Miho reluctantly decides to join the Panzerfahren team, and despite her aversion to the sport, finds herself immediately at home among the tanks. Moreover, after a presentation from the student council, a few students take an interest in the sport as well, including Yukari Akiyama, who’d been in love with tanks since childhood. After locating tanks scattered around Ooarai’s school ship, the student council bring on Ami Chōno, a JSDF captain and tank commander who’d trained under Miho’s mother, to help bring the students up to speed. She sets Ooarai’s Panzerfahren team on a training match, allowing everyone to get a feel for the sport. During the exercise, Hana gets knocked out, but fortunately, Saori sports another one of her friends, Mako Reizei, sleeping in the field. Saori convinces Mako to become their driver, and Miho’s team edges out a win over the inexperienced teams. In the aftermath, Ooarai continues to train. Miho is made the team commander, and the teams are laid down. To prepare them for matches between schools, the student council organises a practise round with St. Gloriana, another school with a Panzerfahren programme. The first three episodes of Girls und Panzer had eased viewers into the series, opening with an introduction to the sport of Panzerfahren and establishing Miho’s return to a sport where she plainly had prior experience, including something that has dissuaded her from continuing.

After the earliest episodes aired, viewers almost immediately set about vilifying Anzu, Yuzu and Momo – their approach in convincing Miho to return to Panzerfahren was decidedly a hostile one, and threatening Miho with expulsion out of the gates created a highly negative first impression amongst viewers of 2012 (AnimeSuki’s “willx” refused to accept the series’ themes even after it had ended and branded them as “arrogant but completely ineffectual”. People like willx were mistaken in their beliefs: despite Anzu’s brazen threats coming across as harsh, once Miho accepts participation in Panzerfahren (however reluctantly), the student council acts in a way that indicates that there is a hint of desperation in their actions. This occurs after the newly-minted Panzerfahren team goes on a hunt around Ooarai’s school ship for tanks: after a hard day’s search, Ooarai adds the M3 Lee, Panzer 38(t), StuG III and Type 89B to their inventory, along with the Panzer IV that had been found inside the warehouses. The student council end up picking the 38(t), a light tank of Czechoslovakian design. With a maximum armour thickness of 30 mm and the 37 mm KwK 38(t) L/47.8 as its primary armament, the 38(t) was adopted by the Wehrmacht after it was determined that it outperformed their own Panzer I and IIs in combat. Despite having high mobility and reliability, it is clear that the 38(t) was no match for medium tanks of the day, and even anti-tank rifles could get through its thin armour if fired at the right spots. Of the tanks available to Ooarai, the 38(t) would easily be destroyed by heavier tanks. In spite of this, the student council chooses this tank, allowing the other students to have access to tanks with better arms and armour. A selfish student council, motivated by self-interest or their own ego, would take the best tank available to maximise their survival and performance in a Panzerfahren match, and yet, they willingly adopt the 38(t) as their tank. This action shows that, contrary to their initial attitude towards Miho, they have high hopes for her and are ready to place their faith in her ability, but saw no other way in persuading Miho to resume Panzerfahren. There’s something bigger in play, although at this point in time, Girls und Panzer betrays nothing about what leads the student council to this level of desperation. Consequently, those who were quick to vilify the student council were jumping to conclusions, plainly mistaken in their thinking. Even this early on, Girls und Panzer shows how understanding the tanks contributes to understanding the characters further. This aspect is what makes Girls und Panzer so enjoyable: there are subtle details that can offer hitherto unparalleled insight into what’s happening, but at the same time, even in the absence of knowledge regarding World War Two era armour, there remains much to enjoy in this show. 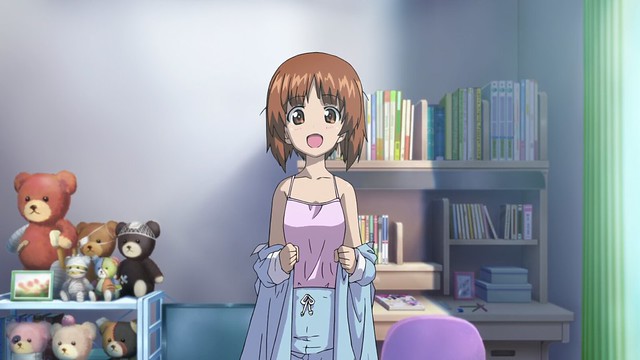 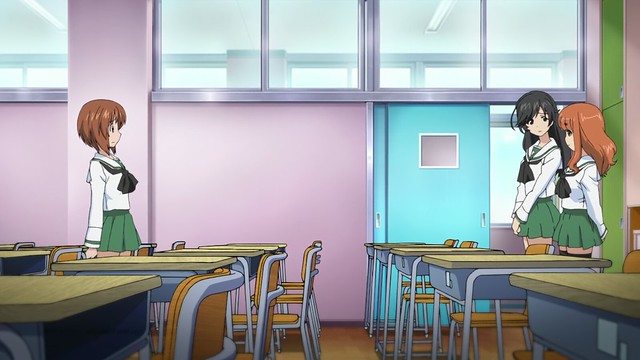 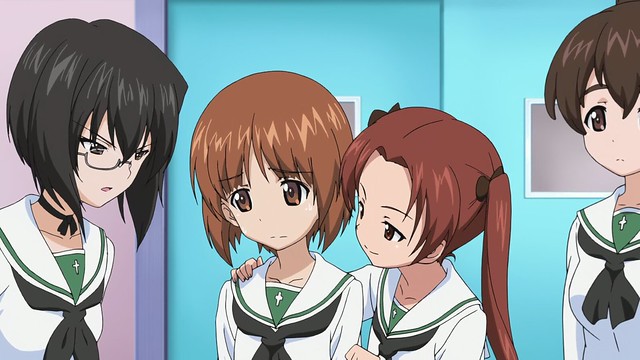 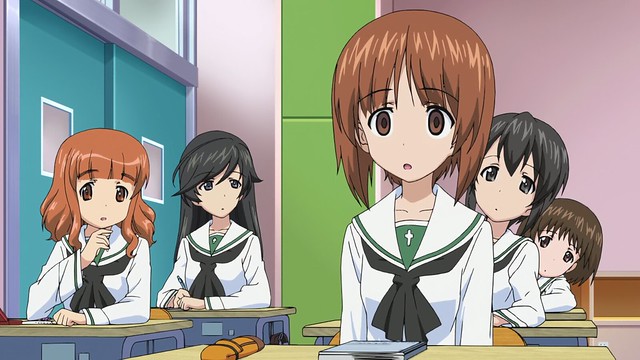 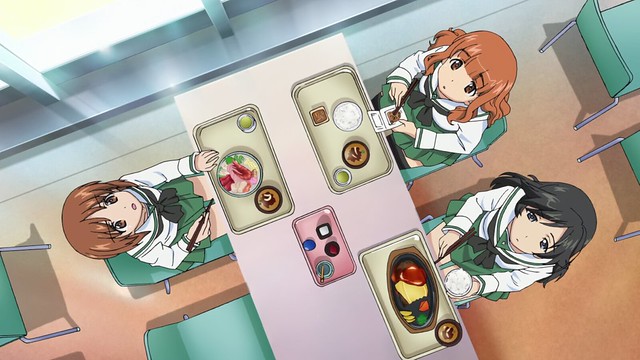 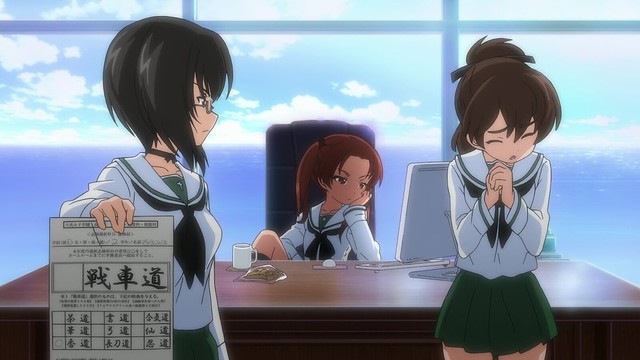 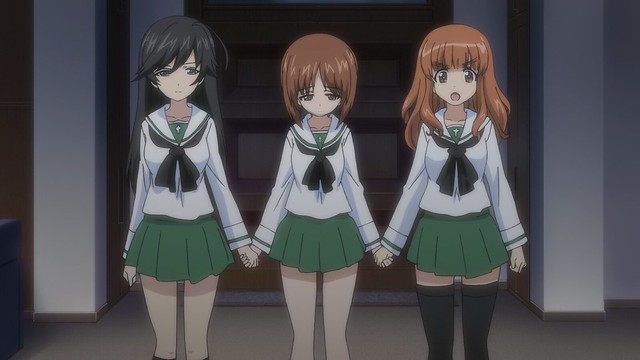 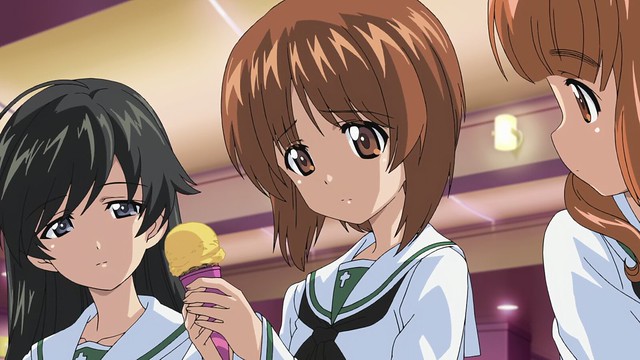 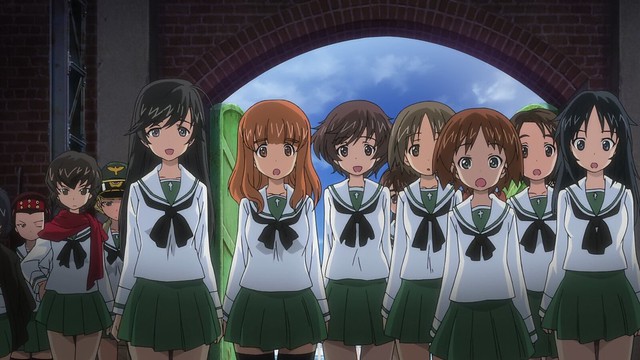 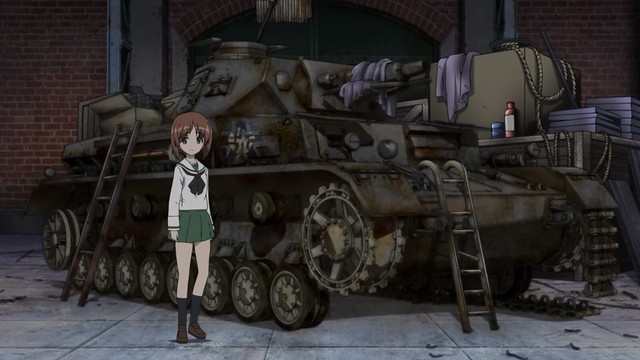 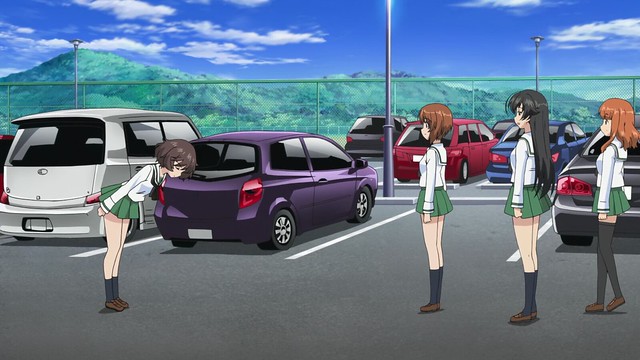 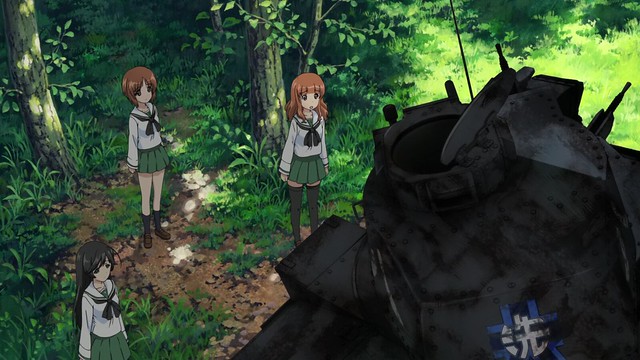 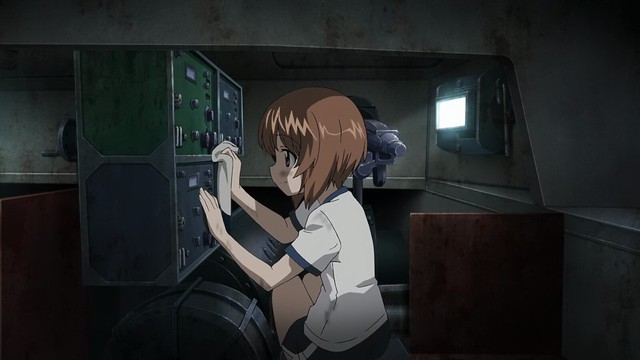 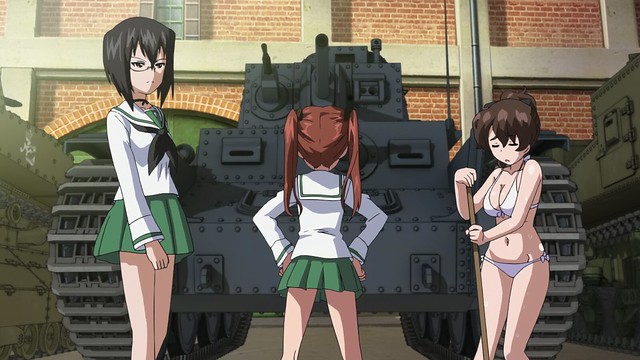 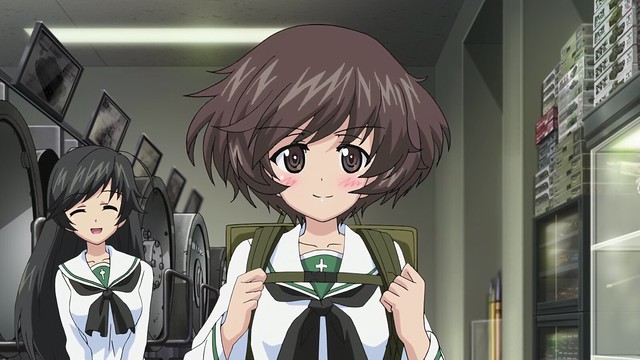 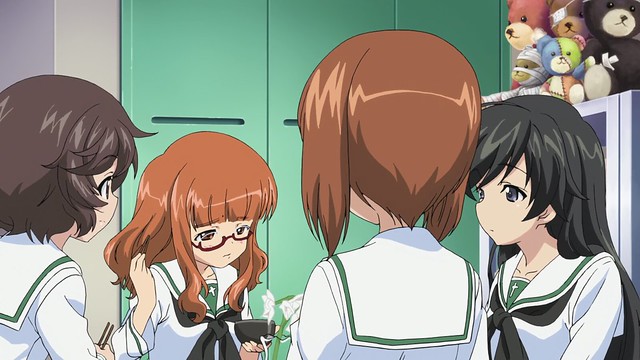 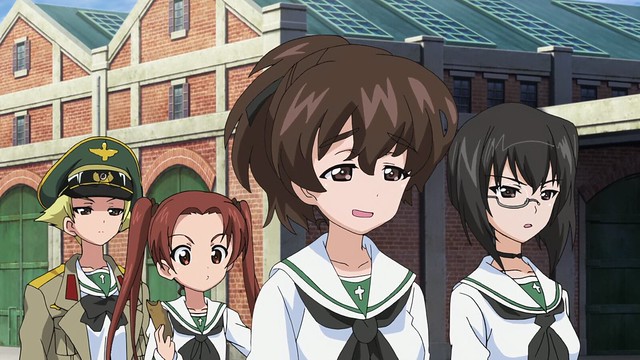 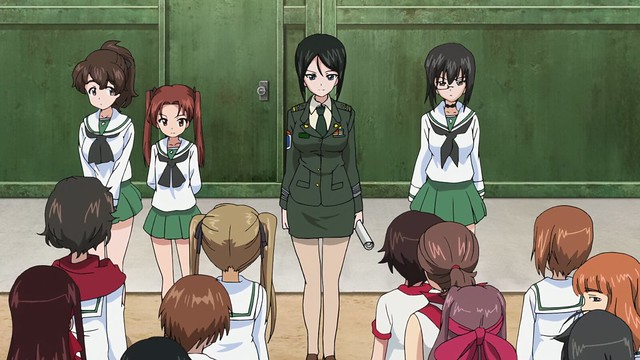 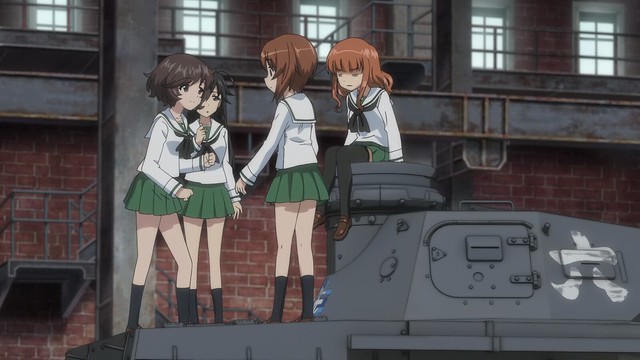 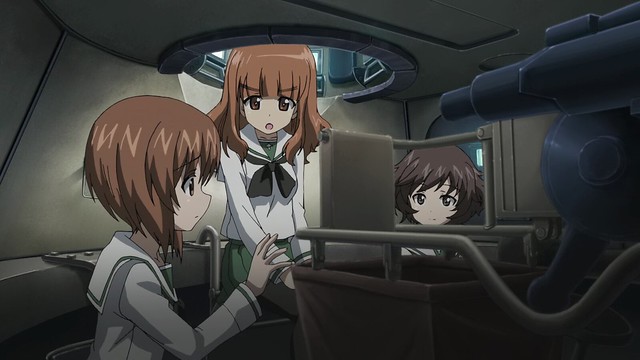 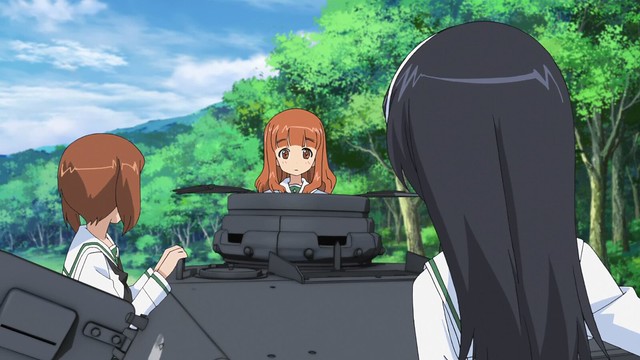 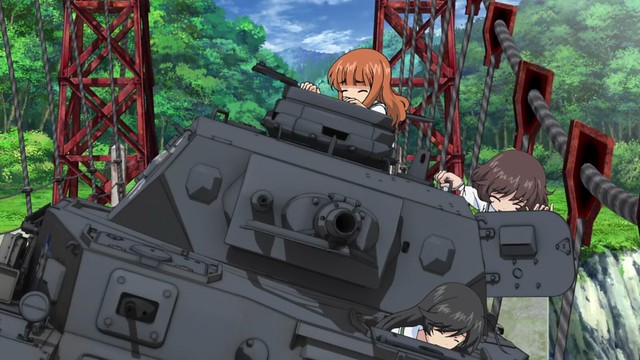 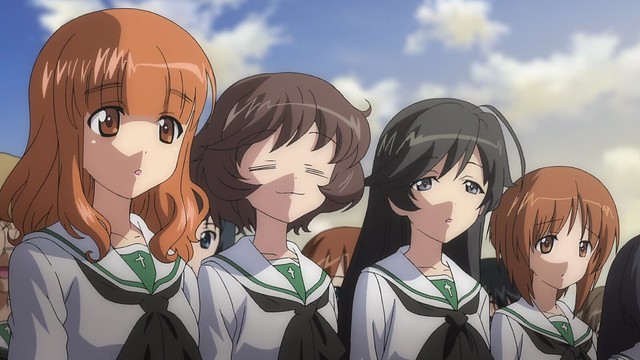 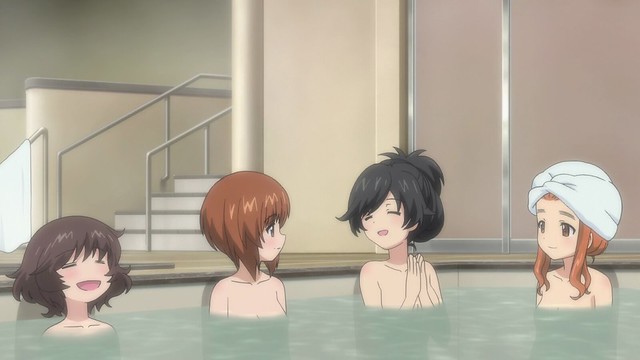 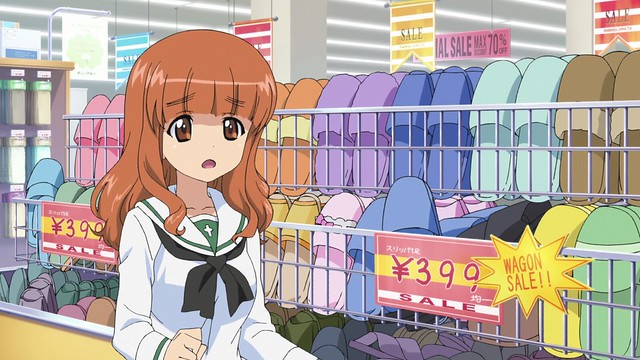 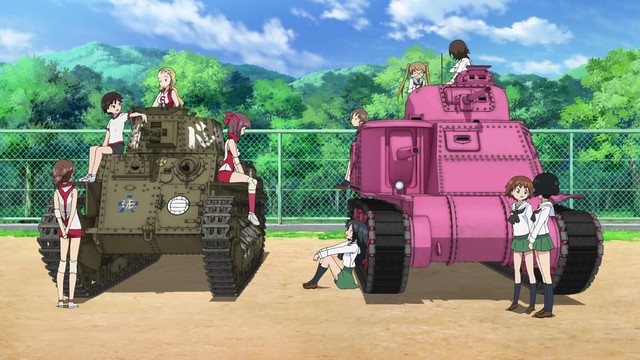 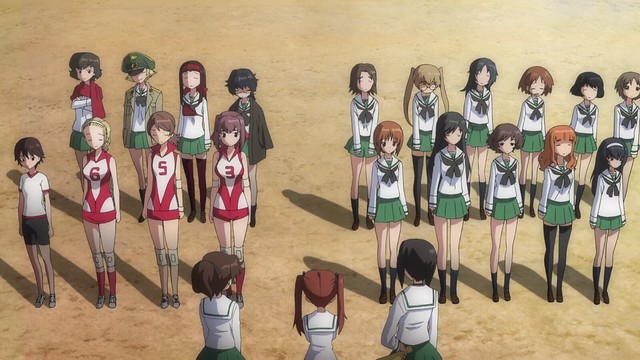 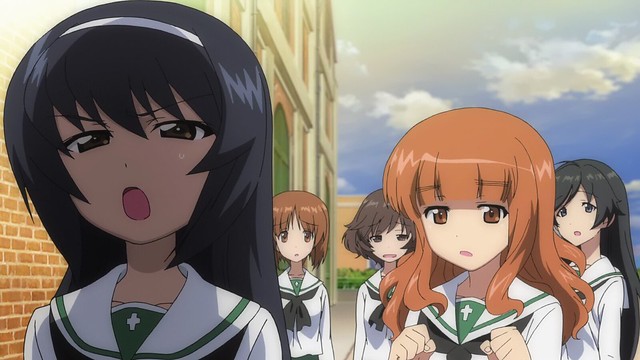 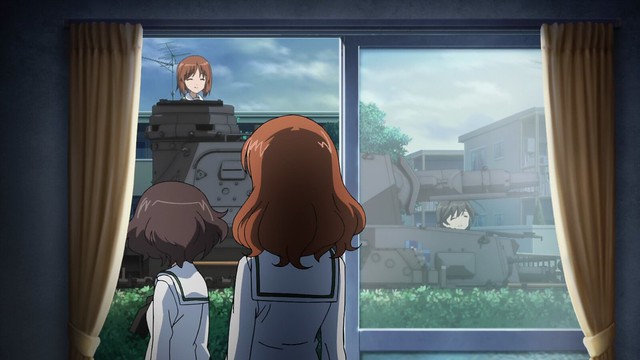 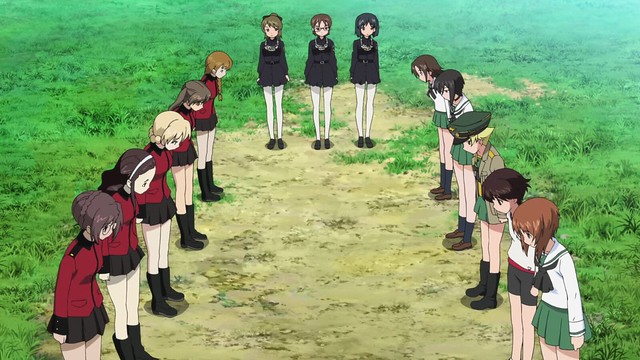 Even nearly a decade 2012’s Girls und Panzer finished airing, this is a series that continues to generate discussions amidst the anime community owing to the sheer depth the series confers. Prior to its airing, the only thing that was known about Girls und Panzer was a sub-par blurb from Sentai Filmworks, which characterised the students as “a few of them would rather shop for tank tops than become tops in tanks, but once their focus is locked and loaded, they’re absolutely driven”. Beyond this, expectations were low, and among the community, people indeed wondered if Girls und Panzer would become the next Strike Witches, better taking the name Girls und Pantsu by focusing on the girls’ pantsu while they were operating the tanks. The Sentai Filmworks description ended up failing utterly to describe Girls und Panzer‘s stakes, and speaking to the series’ incredible writing, the only bit of fanservice that does show up is when the well-endowed Yuzu dons a white bikini to help wash out the dirtied tanks. In fact, the director has commented on how pantsu would most definitely not be a part of this series. Girls und Panzer would go in a completely different direction, one that would captivate viewers: even the doubters would become fans by the time the series ended. Three episodes in, the series did a fantastic job of introducing both Ooarai’s Panzerfahren team to their tools, as well as viewers to this unique world. However, at the same time, Girls und Panzer also uses a striking bit of imagery to remind viewers not to take this series too seriously: as the first episode draws to a close, it is shown that Ooarai is actually situation on the deck of a massive aircraft carrier. I had previously found documentation to show that this carrier was some 7.6 kilometres in length, and since no means exists for constructing such vessels in reality, the use of school ships is a decisive and visceral show that the physics and rules of Girls und Panzer are not entirely equivalent to our own. Consequently, it is an exercise in futility to focus too much on minutiae in this series. I had mentioned that while a prior knowledge of tanks and World War Two armoured warfare doctrine might be helpful, it is not a prerequisite for enjoying this series, whose strengths lie not with the technical detail, but for its masterful combination of a touching story with suspense, thrills and likeable characters.