8 Comments Posted by infinitezenith on February 20, 2022

“I look around at us and you know what I see? Losers. I mean like, folks who have lost stuff. And we have, man, we have, all of us. Homes, and our families, normal lives. And you think life takes more than it gives, but not today. Today, it’s giving us something. It is giving us a chance.” –Peter Quill, Guardians of The Galaxy

Aspiring idol Ino Sakura accepts a contract to work with Mouse Productions and moves to Koganei, a bedroom community in Tokyo. On her first day, she meets manager Hoho Kajino and her new teammates, former actor Roko Sekino, former model Nina Maehara and former musician Hayu Nukui at their dormitory, Mouse House. Here, Ino learns that Mouse House is scheduled for demolitions owing to the fact that Roko, Nina and Hayu can’t seem to find any work. Bringing her naïveté and spirits to the table, Ino promises to do her best, and Hoho thus brands the girls as the Fruit Tarts. Although their lack of fame makes it difficult, Ino is more than willing to do things like handing out supermarket fliers. With her natural ability to open up to others, Ino helps raise community interest in Fruit Tart and raises the others along with her. Over time, Fruit Tart perform at their first concert, a sideshow for the much better-known and more successful Cream Anmitsu (comprised of Roko’s younger sister, Chiko, and twins Nua and Rua Nakamachi), acquire an up-and-coming performer, Hemo Midori, who was originally set to join Cream Anmitsu. As the girls get to know one another better, they also practise to improve their singing, participate in the variety show that Hoho is shooting to raise interest in Fruit Tart, accept classmate Tone Honmachi’s offer to help out with merchandise and marketting, and work their hardest to produce original music for their debut album. During a concert, Fruit Tart manages to sell off all of their CDs to meet their quota. However, this is not sufficient to turn things around, and so, Hoho enrolls them in a national idol competition. The sincerity of their efforts draw the attention of both Oto Kogane, the young acting president of Cat Productions, and Hayu’s mother: it turns out that Fruit Tart’s efforts have not gone unnoticed, and Cat Productions is willing to put on a collaboration with Mouse Productions. Further to this, Hayu’s mother reveals that Hayu and her father do not get along owing to Hayu’s desires to work in entertainment; if Hayu could reconcile with her father, then they would consider sponsoring Fruit Tart. During the collaboration, Ino, Roko, Hayu, Nina and Hemo perform alongside Chiko, Nua and Rua – the concert is a success, and Fruit Tart manages to make the preliminaries for the national competition. Encouraged, Ino promises to do her best with Mouse House from here on out. This is Dropout Idol Fruit Tart (Ochikobore Fruit Tart), a Manga Time Kirara adaptation that aired during the autumn 2020 season – during this time, I was busy with doing my first-ever attempt at doing two simultaneous episodic talks for GochiUsa BLOOM and Strike Witches: Road To Berlin, with the inevitable result that other series from that season fell to the back of my mind.

Having now had a chance to Dropout Idol Fruit Tart, it becomes clear that this series is one that stands of its own merits in typical Manga Time Kirara fashion. Despite a setup optimised towards humour, Dropout Idol Fruit Tart ultimately speaks to the idea of how being true to oneself and acting with sincerity will allow people to find their own way even where it seems that all hope is lost. When Ino joins Mouse House, she meets a group of washouts whose careers appear to have hit a dead end. However, where Roko, Nina and Hayu see failure, Ino sees friendship. Despite being the newcomer, the outside, Ino does her best to make the most of things – their first public appearance, at a local supermarket near the train station, proves successful because Ino is able to interact with the local community and liven things up considerably. This initially helps Fruit Tart to sort out their problem with finances, as the neighbours are all too happy to donate food to them, but later on, as Fruit Tart become more involved, locals begin supporting them in their performances, too; they appear at local concerts to cheer on Ino and the others, as well as pick up merchandise. Fruit Tart’s successes are aided by Tone, whose family runs an okonomiyaki shop. While her interest in Fruit Tart, and Ino in particular, is initially something that is met with a cool reception, once Ino and the others accept her, Tone proves to be an asset, putting forth a sincere effort to see Fruit Tart succeed: it turns out she’s a major fan of idols, and this knowledge makes her valuable in helping Fruit Tart to drive sales and increase their visibility. Again, cultivating a more hands-on approach and gaining the locals’ support is something that ends up giving Fruit Tart the stepping stone they need to begin building up a fanbase and reputation as a competent group of idols. Although their singing and dancing needs to be on point, and Chiko’s advice about engaging the audience is sound, idols also need to have a unique identifying characteristic. Being well-connected to Koganei’s community is ultimately what sets Fruit Tart apart from much more popular and successful idol units, and in the end, gives each of Ino, Roko, Nina, Hayu and Hemo a chance to show the remainder of Japan what they’ve got. 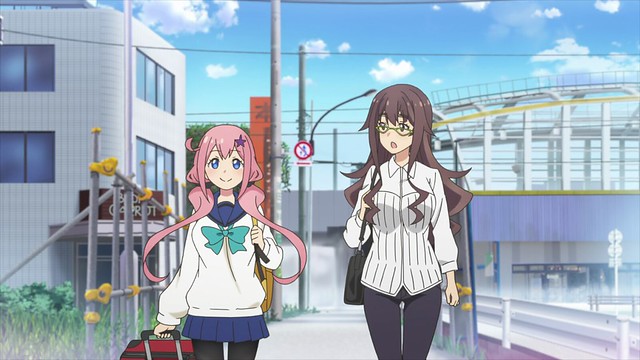 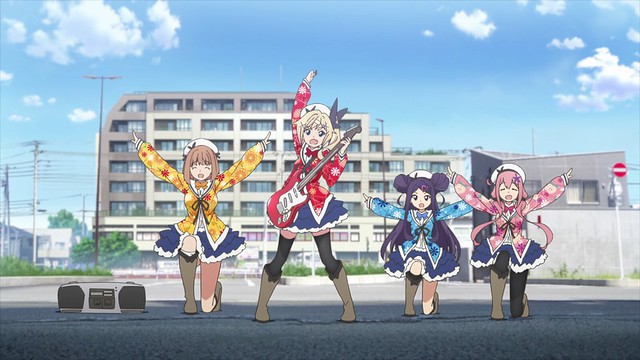 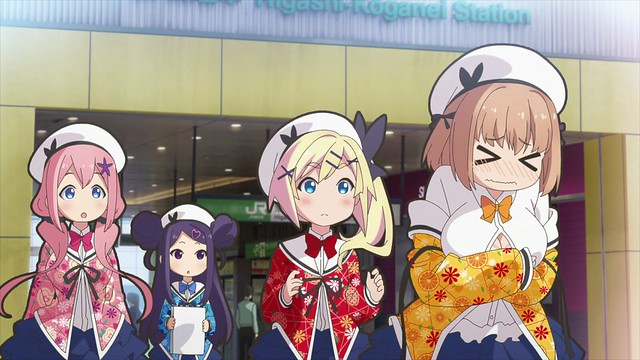 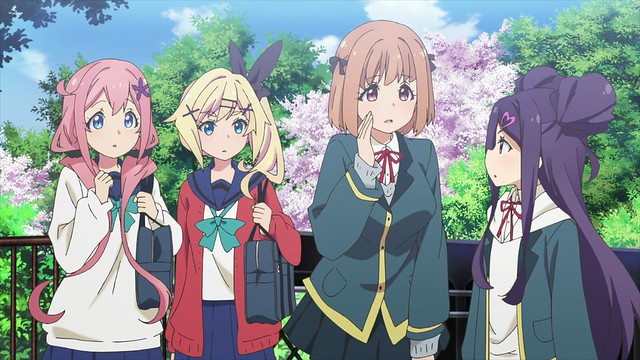 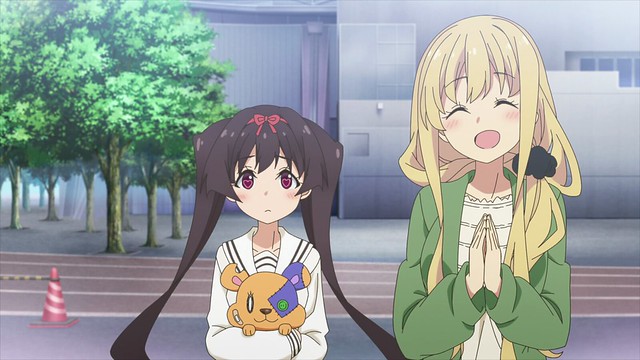 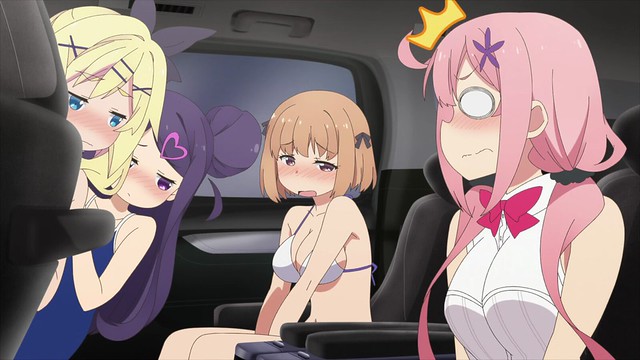 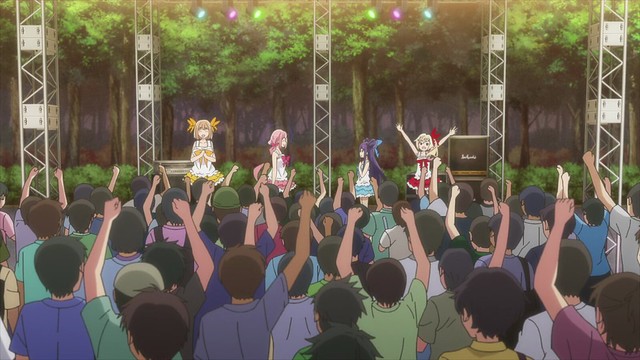 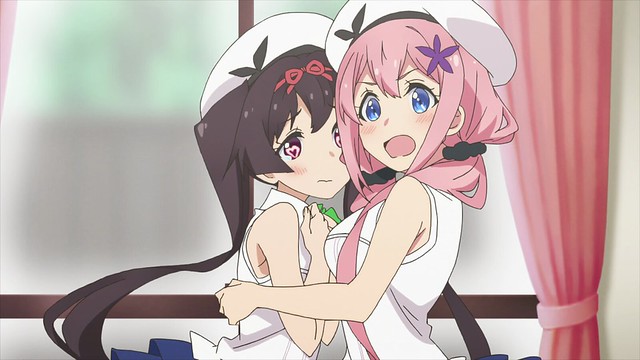 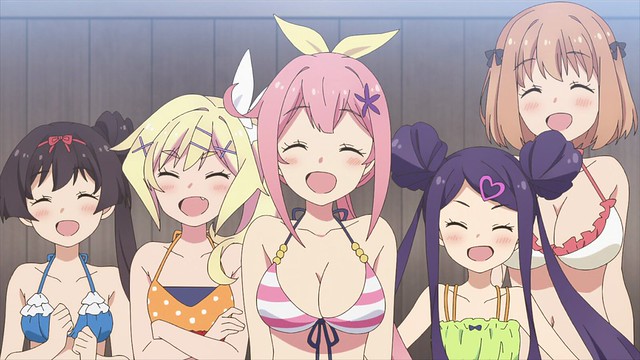 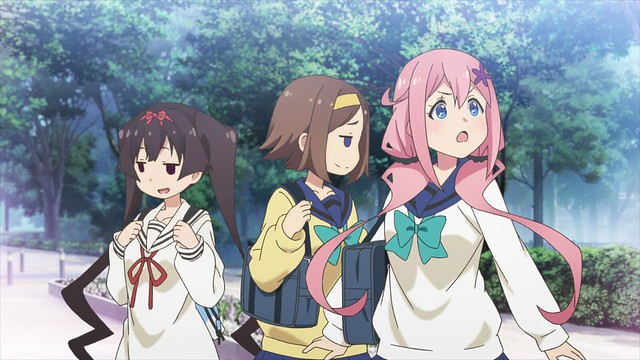 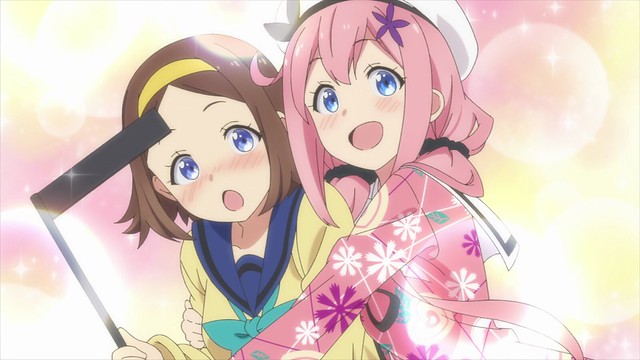 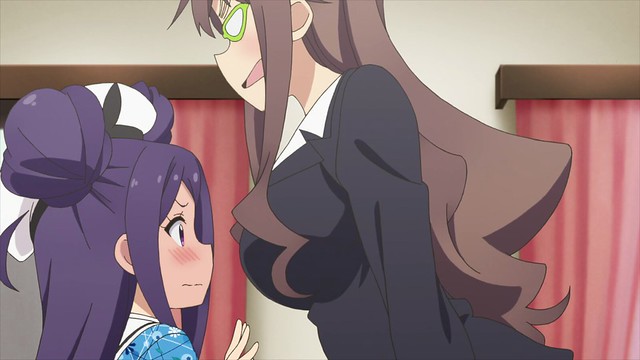 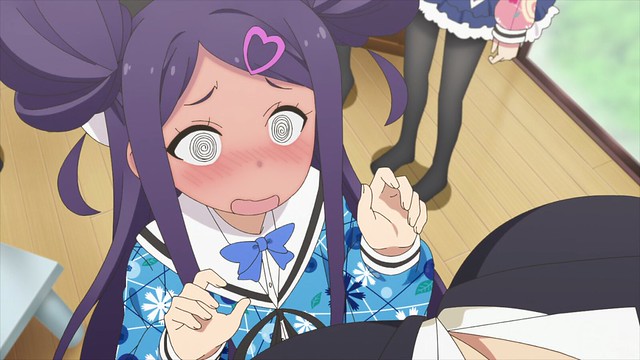 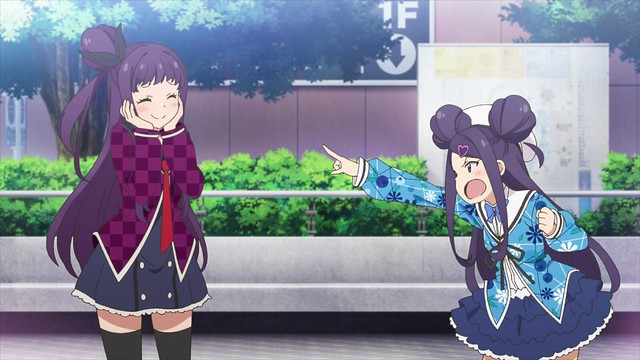 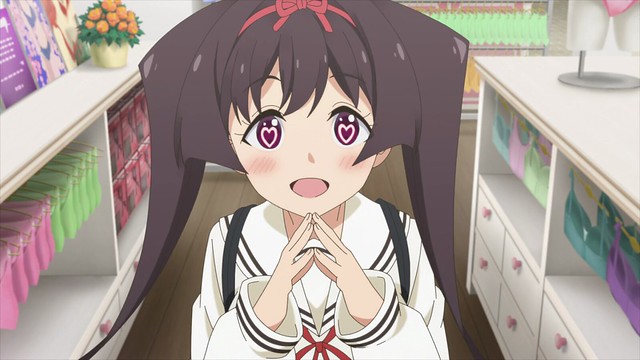 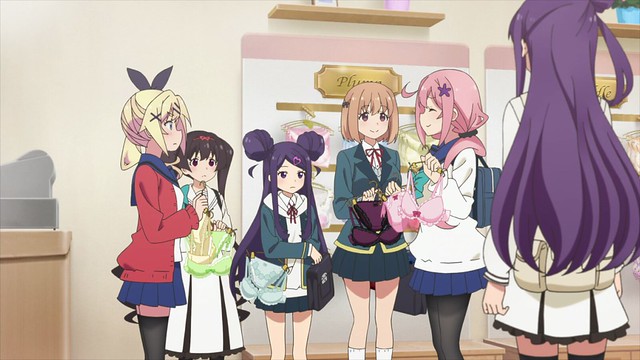 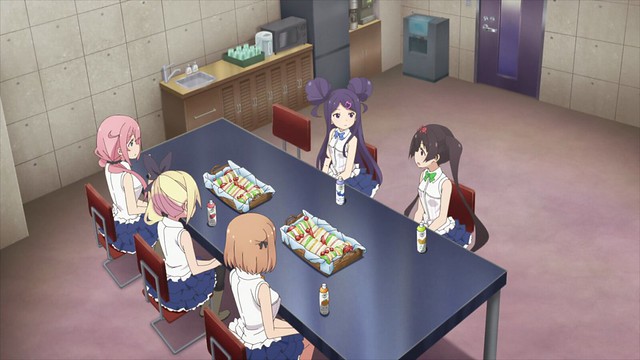 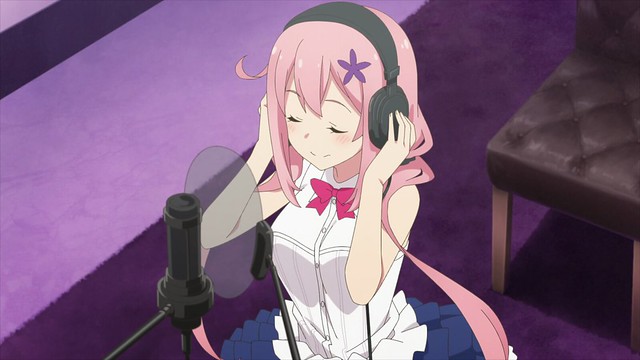 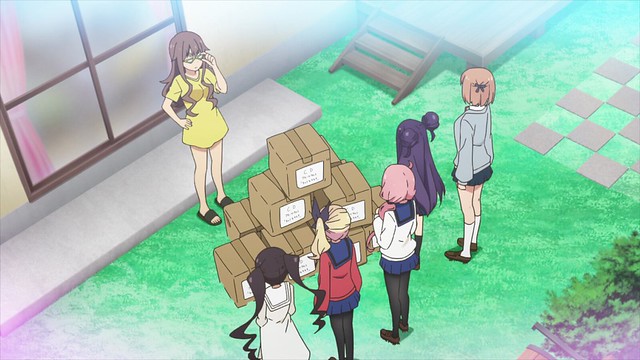 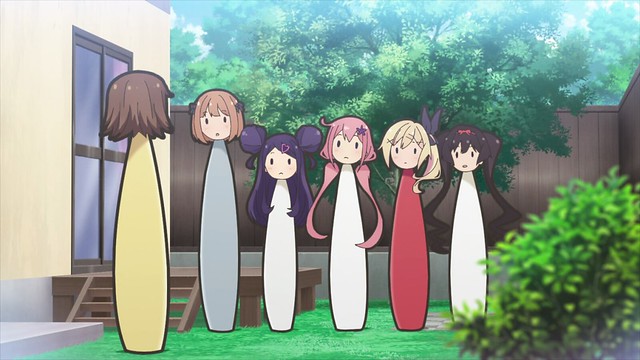 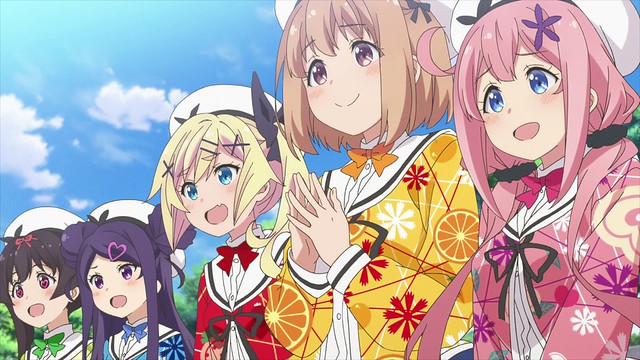 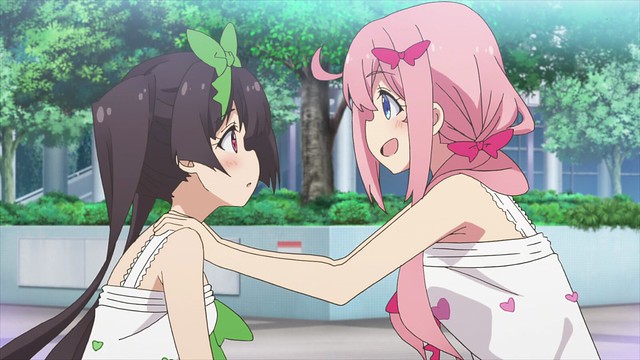 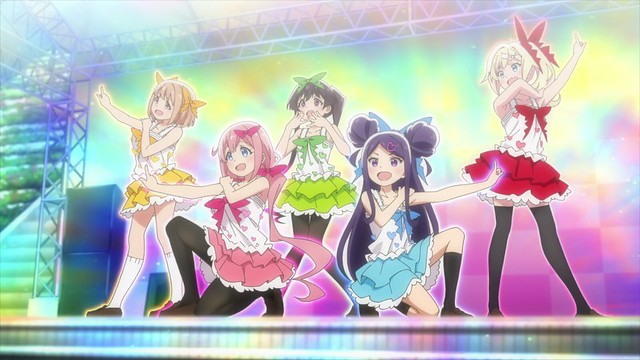 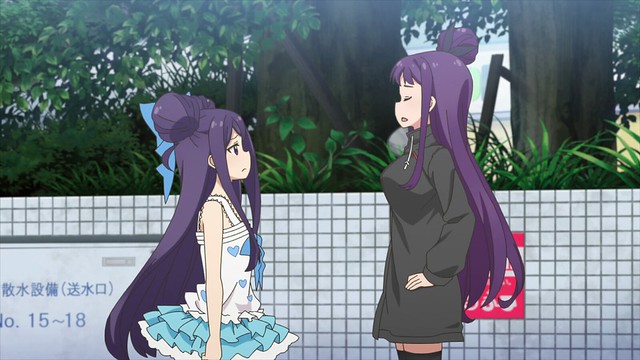 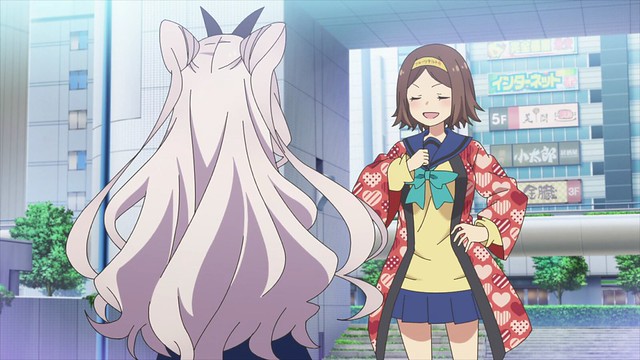 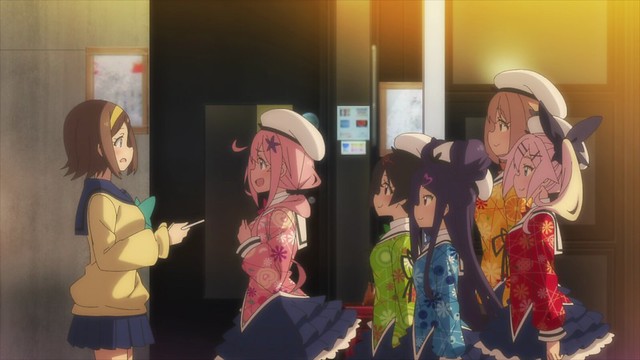 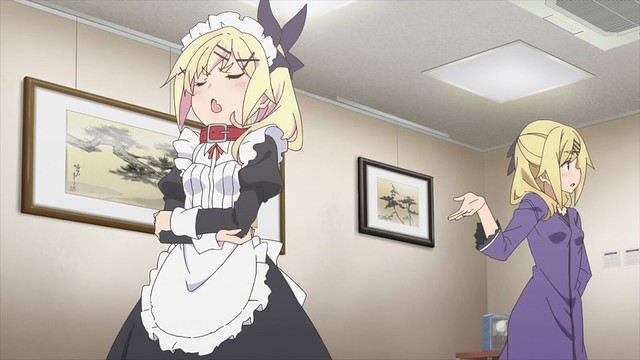 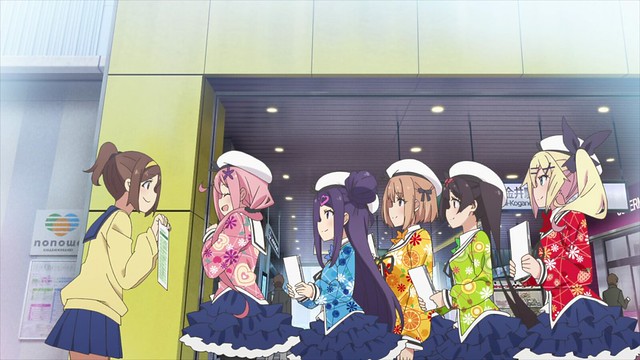 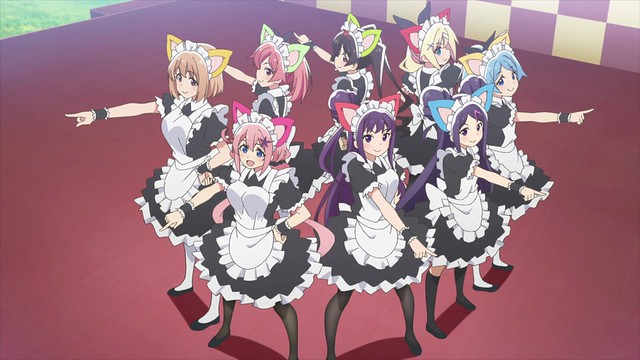 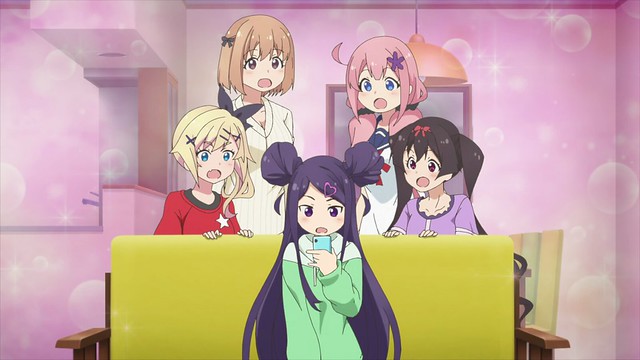 Dropout Idol Fruit Tart represents the convergence of several genres, combining the light-hearted and oftentimes, adorable comedy that is present in all Manga Time Kirara works with the idea of local idols promoting local specialties, as Locodol and Action Heroine Cheer Fruits did. Unlike much larger idol franchises like Idolm@ster and Love Live, which deal with what the journey at the top looks like, or the rough-and-tumble portrayal of gaining a foothold in a brutal industry, as Wake Up, Girls! had portrayed, these smaller idol series serve to remind viewers that even if they are not commercial successes as much larger, more organised and disciplined units are, groups like Fruit Tart still have their charm precisely because they’re small and connected to one’s neighbours. These sentiments, of supporting local efforts and local businesses, is becoming especially prevalent because it fosters a strong sense of community, of giving back and raising up people around oneself. Supporting local efforts increases resilience, demonstrates commitment to one’s place of residence and even promotes sustainability. Altogether, this really serves to foster a sense of community: both Locodol and Action Heroine Cheer Fruits had accomplished this, and here in Dropout Idol Fruit Tart, it becomes clear that Ino and Fruit Tart have successfully done the same. Although Ino had come upon a group of losers, of people who’d lost things like opportunity, recognition and enjoyment of their chosen role, her sincerity and honesty brings new hope to each of Nina, Roko and Hayu, as well as encouraging people like Hemo and Tone to step their game up and work towards a shared goal. Ino starts things off by connecting Fruit Tart to the community, and in doing so, brightens their days enough so the community gives back. This synergy is what transforms a group of losers, into a unit armed with a newfound determination to give their work their best effort; in this way, Dropout Idol Fruit Tart proved to be a superbly enjoyable series, and while it never forgets its roots as a Manga Time Kirara series, it also manages to celebrate community in the process, reminding viewers that people are stronger together.