8 Comments Posted by infinitezenith on February 21, 2022

“I like this guy’s lack of style.” –The Donbot, Futurama

During their match against St. Gloriana, Miho opens by directing her tanks to a ridge such that they have the elevation advantage, and then has her own crew bait St. Gloriana’s tanks into following them into an ambush. Their initial attack fails owing to Ooarai’s poor aim, and with St. Gloriana returning fire, the first years flee the battlefield, while Miho has the remaining tanks fall back into the streets of Ooarai. Here in the narrow roadways, Miho and the others use the area’s layout to neutralise St. Gloriana’s Matilda IIs – St. Gloriana’s commander, Darjeeling, is shocked that a single Panzer IV has taken out her supporting tanks. However, the remainder of Ooaria’s tanks get knocked out in the process, as well. Miho gambles on a risky manoeuvre to gain the upper hand Darjeeling’s Churchill Mk. VII, but anticipating such a move, Darjeeling returns fire, taking Miho out of the battle and ending the match. In the aftermath, Darjeeling thanks Miho for a splendid game and remarks that she is nothing like her sister. Miho and the others perform the Anko dance as a consequence of losing, and later, Miho, Saori, Mako and Yukari accompany Hana to visit her mother. Hana learns that her mother is disapproving of her pursuits and effectively disowns her, but Hana vows to follow her own path. Ooarai enters the national Panzerfahren tournament and Miho draws Saunders Academy as their first opponent. Girls und Panzer‘s fourth episode marks the first time Miho leads Ooarai into a match against another school, and sets precedence for what is to follow: Panzerfahren matches are categorised as either elimination matches (immobilise all enemy tanks) or VIP matches (take out the designated tank), and here, viewers are afforded a glimpse of what happens during a match: understanding one’s strength and weaknesses, taking advantage of the environment, and playing on the other team’s psyche all come into play. This is the definitive moment for many viewers, showing the emotional tenour surrounding a match, while at the same time, also giving viewers insight into the meaning behind Panzerfahren: Darjeeling is a graceful winner, and after the match ends, expresses her respect for how Miho conducts herself on the battlefield. Sportsmanship is a key component in Girls und Panzer, and Darjeeling is the first to set this example for viewers.

St. Gloriana proves to be an interesting school against the style that Miho brings to the table; documentation shows that their preferred combat style entails elegance, advancing in a neat and structured manner while returning fire, and when pressed, St. Gloriana tends to hold their ground. Against most foes, St. Gloriana acts patiently, bidding their time and letting the enemy make the first move. Conversely, Miho introduces her own brand of Panzerfahren to Ooarai, using tactics to break up formations and destroy enemy tanks individually to counteract the fact their tanks lack firepower and armour. By favouring mobility above all else, Ooarai’s methods are the polar opposite of those St. Gloriana uses: Miho will come to frequently order her units to get creative and move around in a way to make themselves difficult to hit, compensating for their lack of armour and allowing tanks to position themselves in a way as to score hits on the comparatively lighter rear and side armours of enemy tanks. In such a match up, experience is the deciding factor, rather than style. If Darjeeling’s tanks have truer aim, they’d pick off Ooarai’s tanks before there’s a chance to return fire. If Miho’s team can be precise and purposeful in their movements and positioning, they can out-manoeuvre a static opponent. The outcome of this first battle lays bare the obvious: Miho and her crew still need time to build up their team chemistry and acclimatise to their tanks’ capabilities. Such a match also exposes where Ooarai is presently weak – their marksmanship is poor, and the first years outright abandoned their posts. Ooarai is plainly beginning their journey, but the makings of a capable team is present. To overcome St. Gloriana, Miho has already shown that her style of capitalising on her tanks’ mobility can present a challenge to St. Gloriana: at ranges of under 100 metres, both the M3 Lee’s 75mm L/31 and the Panzer IV’s 7.5 cm KwK 37 could punch a hole in the Churchill’s rear armour if they could get behind the tank. Similarly, the StuG III’s 7.5 cm KwK 40 would be able to punch through the Churchill’s front armour at a range of 250 metres with APCR rounds. Had the correct teamwork been present, the tanks Ooarai fields would be more than satisfactory for the job. As such, this battle shows how equipment disparities notwithstanding, what matters most in a Panzerfahren match is the team itself – a successful team will work together to augment their strengths and cover for their weaknesses, theoretically allowing teams using weaker tanks to nonetheless hold their own and even surprise teams with some of the most iconic tanks of World War Two. Thus, losing to St. Gloriana shows Ooarai while they presently lack finesse, there is potential amongst the team, giving Ooarai a tangible objective to work towards ahead of their match against Saunders. 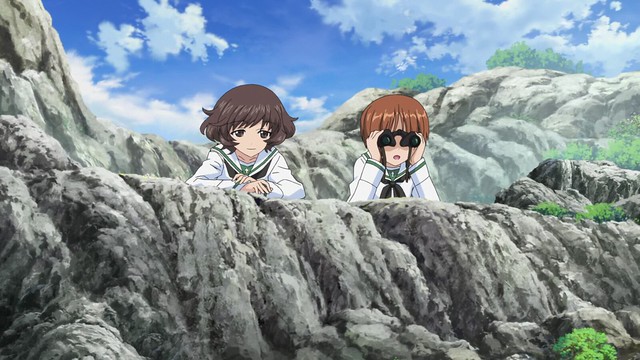 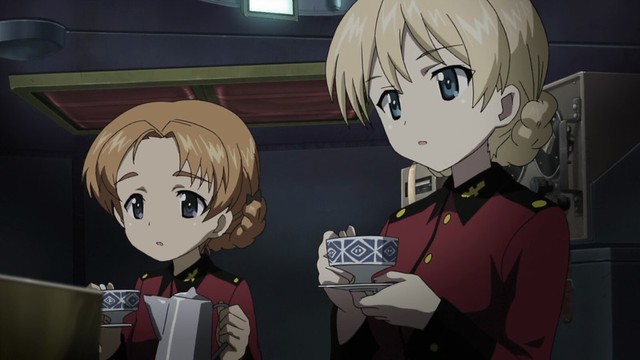 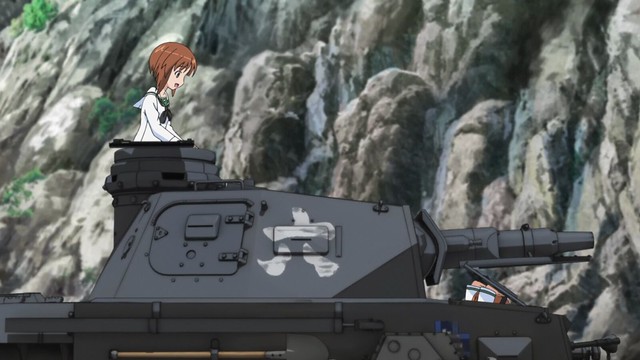 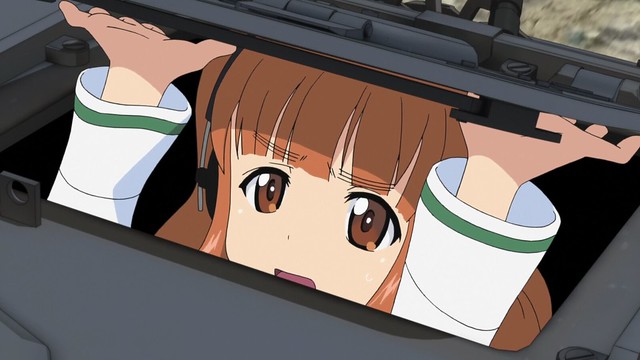 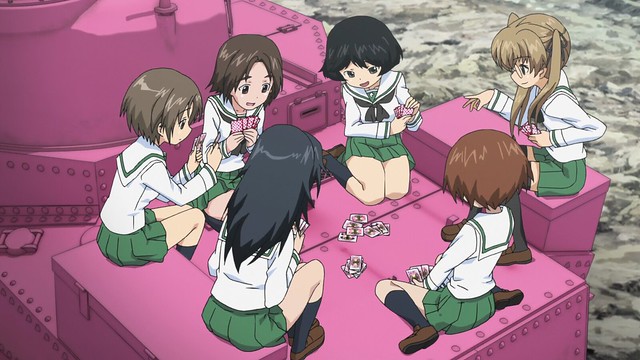 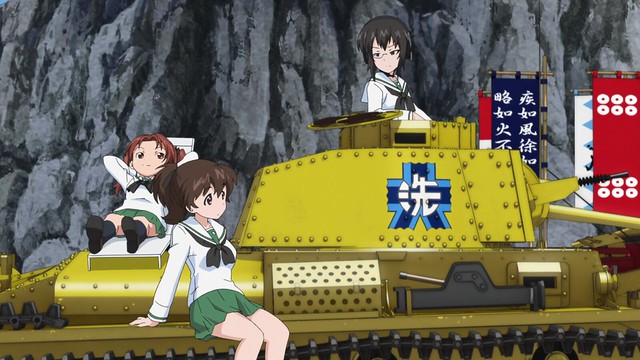 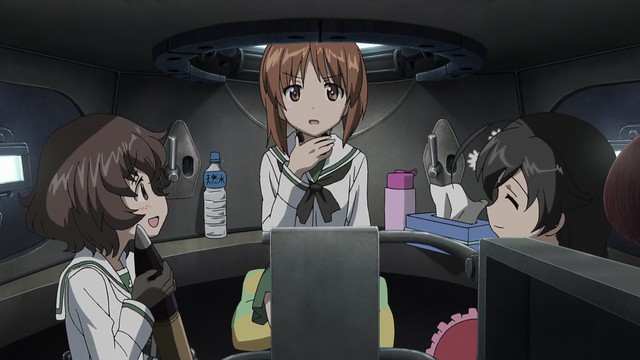 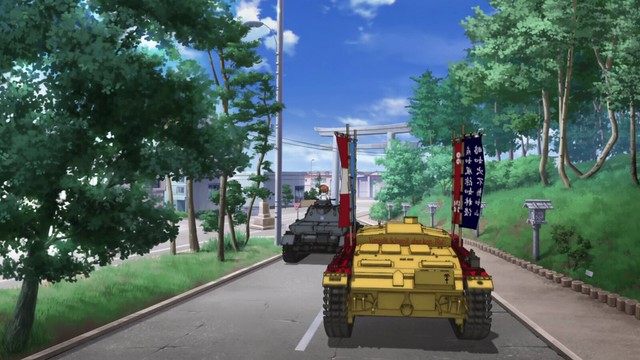 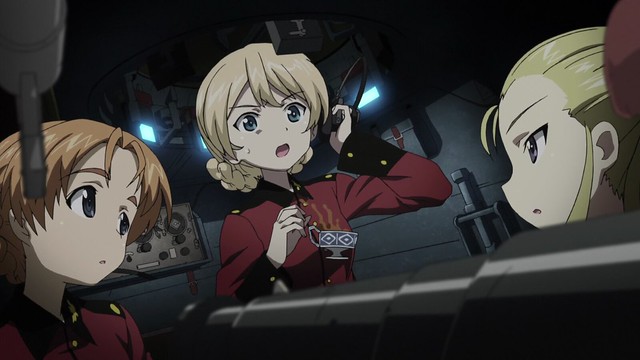 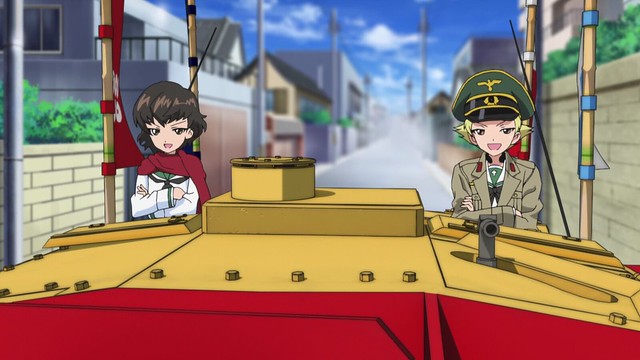 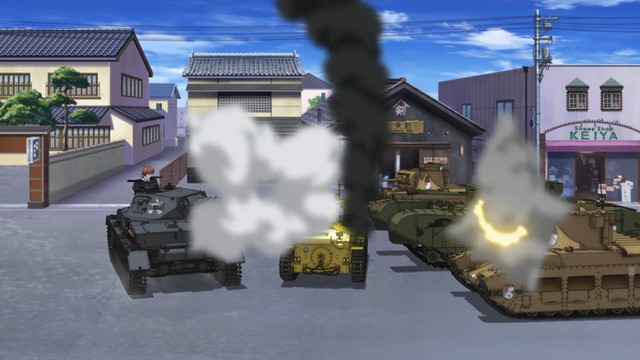 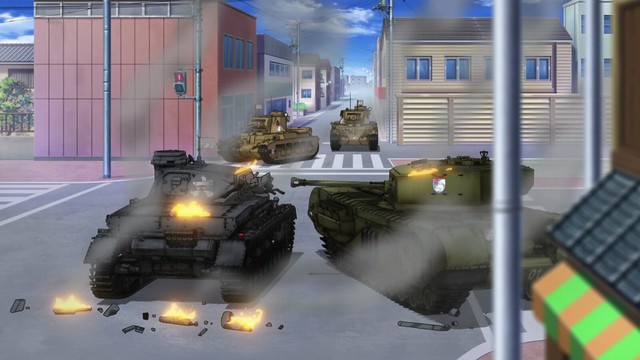 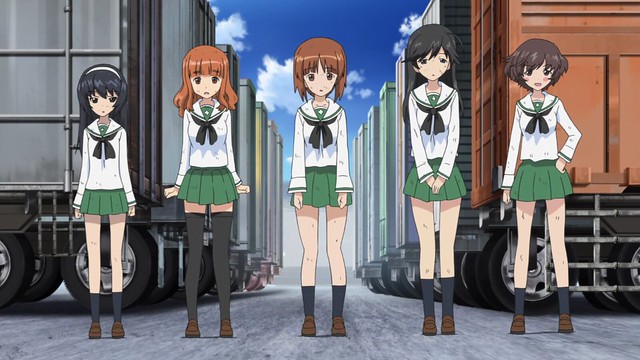 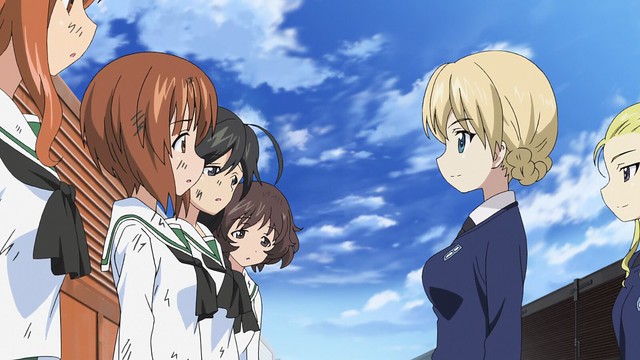 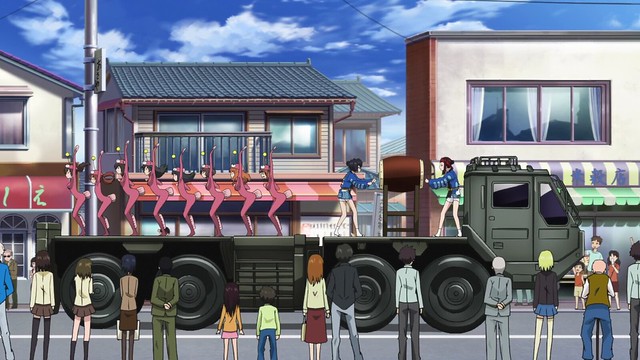 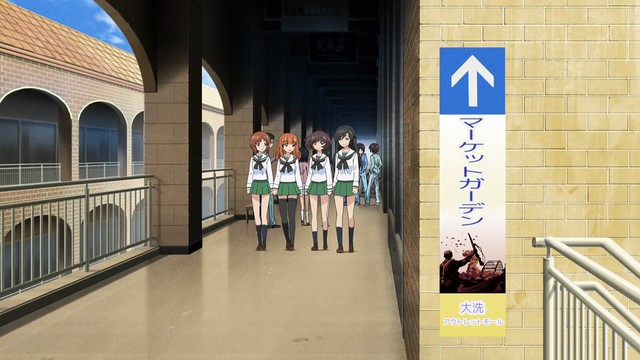 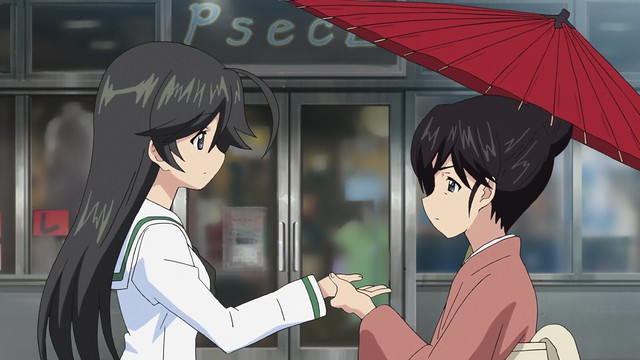 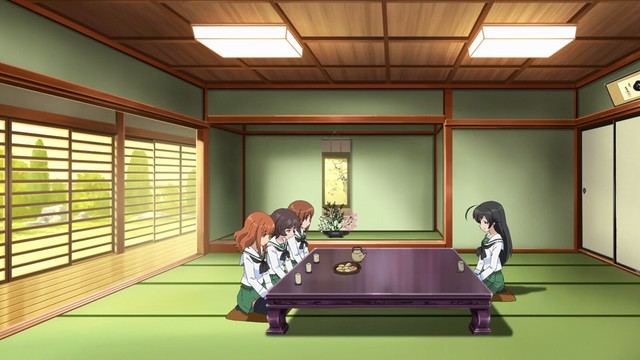 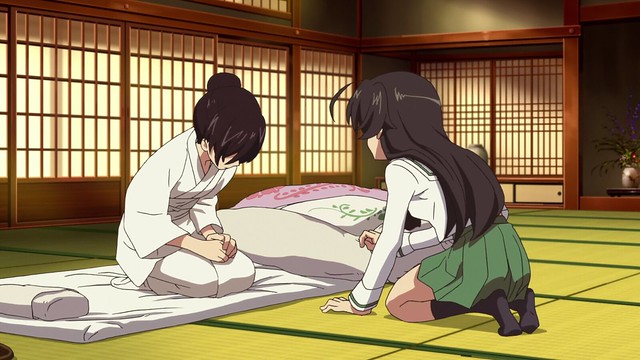 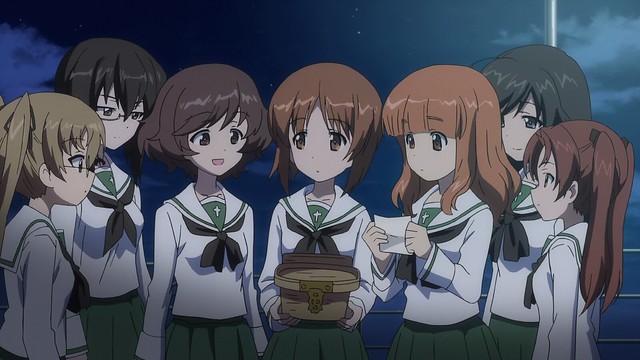 When the match between Ooarai and St. Gloriana has Miho’s team pushed to the defensive, Miho directs her forces into the town of Ooarai itself, capitalising on her team’s knowledge of the area to buy time while she works out how to best engage them. All of the schools in Girls und Panzer hail from different parts of Japan: St. Gloriana is from Yokohama in Kanagawa, while Saunders is located in Nagasaki. Pravda is situated in Aomori, and Kumamoto is where Black Forest calls home. Each of these locations have their own specialties and attractions, worthy of visiting. Similarly, the various schools seen in Girls und Panzer all have their own distinct traits: St. Gloriana is a school for refined young women who practise aspects of British high culture, while Saunders has an all-American theme, calling for enthusiasm and a go-big-or-go-home mindset. Conversely, Ooarai Girls’ Academy doesn’t have a distinct theme, mirroring the fact that Ooarai in Ibaraki has been counted as one of the dullest places to visit in Japan. A quick glance at Ooarai finds why: it is a coastal town located north of Tokyo and, aside from hosting Japan’s nuclear energy research programme, has very little going for it in the way of attractions. However, being an agricultural town, Ooarai does offer several notable products, including fish and sweet potatoes. In addition, the presence of Ooarai Marine Park and shopping malls, plus the presence of engaged, spirited residents, show that Ooarai is more than what its outward appearance suggests, and similarly, Ooarai Girls’ Academy can be full of pleasant surprises despite not having an identifying trait. The decision to have the first match in Ooarai itself allows Girls und Panzer to tell a story about Ooarai Girls’ Academy without needing to take away from the focus on Panzerfahren matches: by having Miho, Saori, Hana and Yukari do the Anglerfish Dance and discuss plans to unwind after their training match, Girls und Panzer suggests that contrary to impressions otherwise, Ooarai does have its own charms, and in this way, we are reminded that Ooarai Girls’ Academy also has its own charms, too. Indeed, the lack of style in Ooarai suggests that this is a school that is a blank slate, able to adapt and overcome in their own way; although on first glance, Ooarai Girls’ Academy might be boring or dull, those with the patience to look beneath the surface will find a group of colourful individuals, each with their own strengths and merits, just as how the town of Ooarai has much to offer to visitors and certainly is more than its designation as one of Japan’s most boring places to visit, in turn foreshadowing the surprises that Ooarai Girls’ Academy has in store for viewers.