“When you are sorrowful look again in your heart, and you shall see that in truth you are weeping for that which has been your delight.” –Kahlil Gibran

With their school’s culture festival in full swing, Koharu gloats about her fishing prowess and expresses a want to do something related to fishing. Their class ends up doing a haunted house featuring parasites encountered whilst fishing. Meanwhile, Hiyori and Koi’s class go with a more traditional cafe, where they plan on serving fish sandwiches. While speaking with Futaba, Hiyori learns that she’s worried about reading her essay in front of the entire school. She decides to invite Futaba out fishing with her, and seeing Hiyori attempt to prepare her own bait inspires her to give the essay-reading her best, too. Later, Hiyori and Koharu’s parents attend the culture festival. Hiyori’s father is repulsed by the parasites, but both of them enjoy the fish sandwiches from Koi and Hiyori’s class. Futaba and Aiko arrive too late for the fish sandwiches, but after Hiyori promises to go fishing with her, Aiko asks if she can join, too. This culminates in a girls’ camping trip: Hiyori and Koi’s mothers, along with Futaba, Miyano, also join Koharu, Hiyori, Koi, Futaba and Aiko. During this trip, Koi reassures Aiko that it is enough to spend time with Futaba to maintain their friendship, and the next morning, Koi and Hiyori reminisce about how a slip-of-the-tongue led to Hiyori’s mother tying the knot with Koharu’s father. Although Koi feels like she had been meddling in something outside her domain, Hiyori is grateful for this, as it allowed her to meet and become close to Koharu. While looking through some old photo albums, Koharu learns that Koi had once shown Hiyori how to tie fishing flies and asks her to do the same. During a fishing competition, Hiyori becomes excited to learn that first place is a giant plushie, and she ends up taking home the prize with her catch, while Koharu wants to catch a fish with the fly she’d tied. She succeeds, but accidentally drops her phone in the river. When Koharu’s birthday arrives, after Hiyori spots the gifts that Aiko, Futaba and Koi gift her, she becomes worried her gift (a photo album) would look plain by comparison and hesitates to give it to her. She is able to do so in the end, and the two spend an evening looking at their photos, before promising to go fishing together again soon. This is Slow Loop, the latest Manga Time Kirara series to receive an animated adaptation, and during its run, combines elements from several slice-of-life series to present a generally light-hearted and cheerful story of discovery, and taking a step forwards together with family.

The message that Slow Loop presents in its run is a familiar one: unified by a common interest and a new bond allows Koharu and Hiyori to become closer to one another and rediscover joy anew with one another. Although both had suffered loss in their lives, fate brings the two together and leads them to, as family, rise above their grief together. Along the way, both Koharu and Hiyori have plenty of support from those around them: whether it be the steadfast love from their parents, the wisdom that Koi brings to the table, or the youthful vigour surrounding Futaba and Aiko, Slow Loop indicates that the process of coming to terms with loss, and taking that difficult step forwards, is catalysed by good company, in conjunction with a healthy bit of patience. Living up to its name, Slow Loop slowly allows Koharu and Hiyori to know one another, slowly has the two learn from one another as they fish and cook together, and bit by bit, both mature as a result. Koharu learns to fly fish and becomes more honest about how she feels (where she’d previously masked her feelings with a smile, Koharu now openly expresses her thoughts on things), while Hiyori begins to develop basic understanding of cooking and becomes a little more outgoing (being able to speak with others and even hear out some of their problems). Altogether, the journey in Slow Loop presents a very optimistic outlook on how people can overcome great hurdles: together. In typical Manga Time Kirara manner, Slow Loop delivers a story that tends towards comedy and smiles over more introspective and contemplative moments; exaggerated facial expressions, punch-lines and use of humour remind people that with the right people in one’s corner, there is always new joy to find in the world, even in moments of great sadness. While Slow Loop might not be as focused as Tamayura, Houkago Teibou Nisshi or Yuru Camp△, the series does succeed in its stated goal, hinting at how fateful encounters and shared interests can propel people forwards. This anime ends up being a best-of-both-worlds, showcasing how different elements can come together and impact individuals in unforeseen, but beneficial, ways. 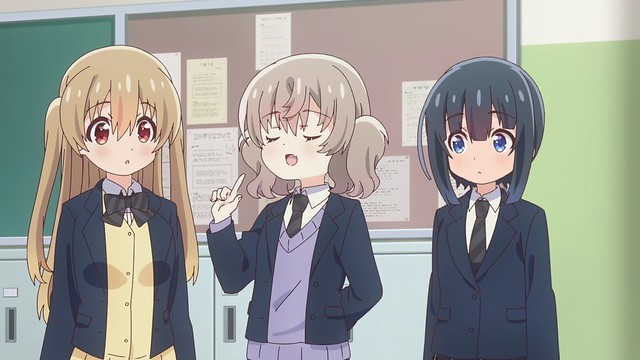 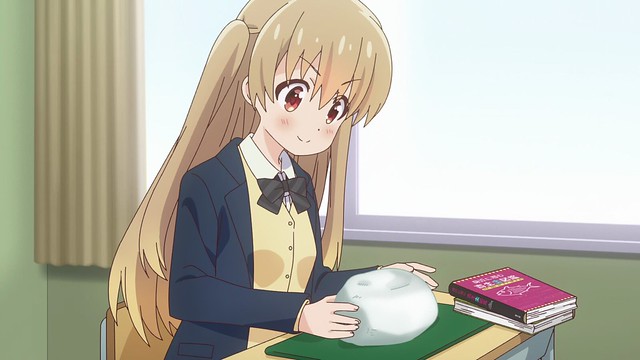 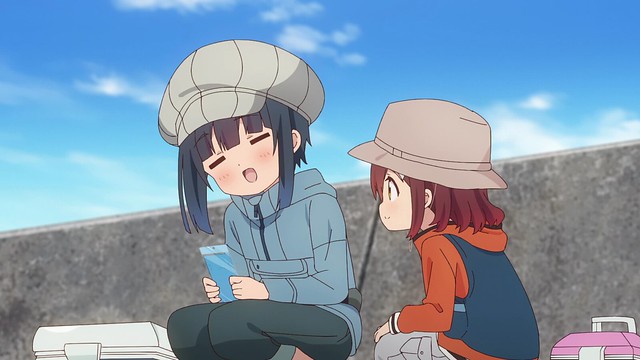 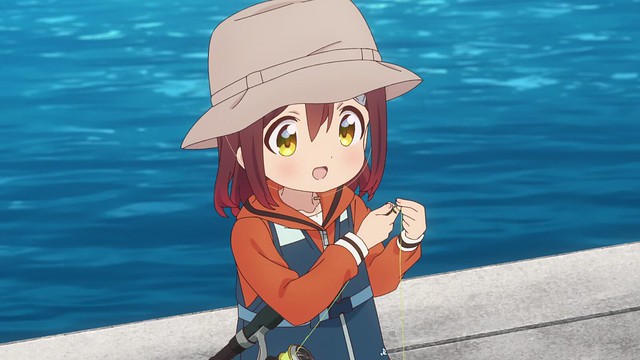 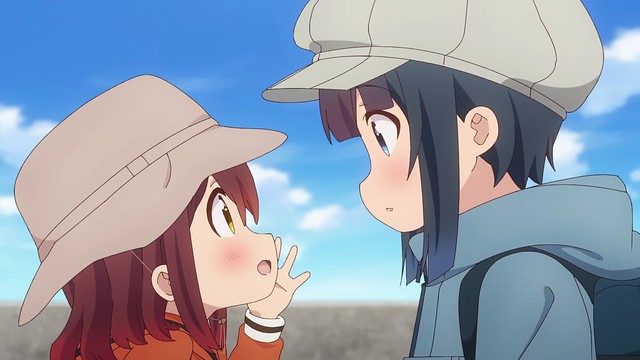 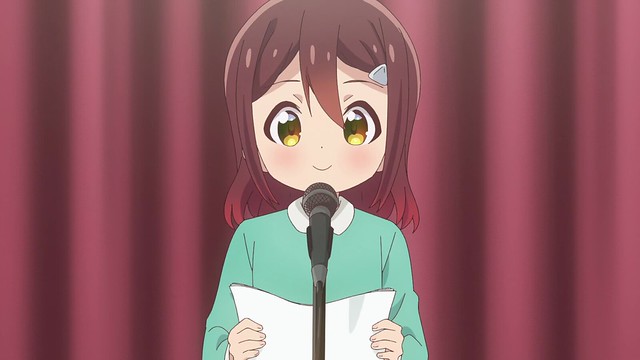 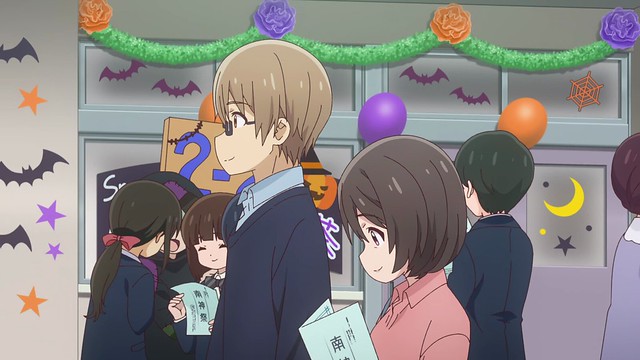 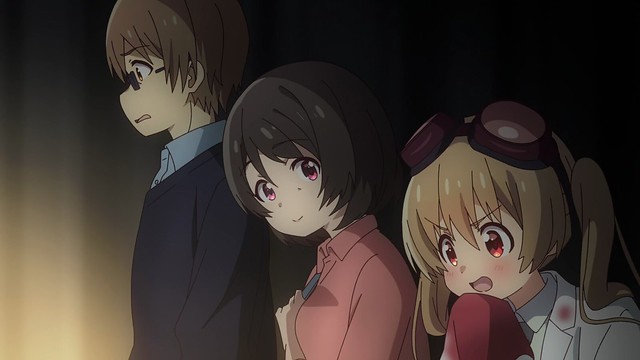 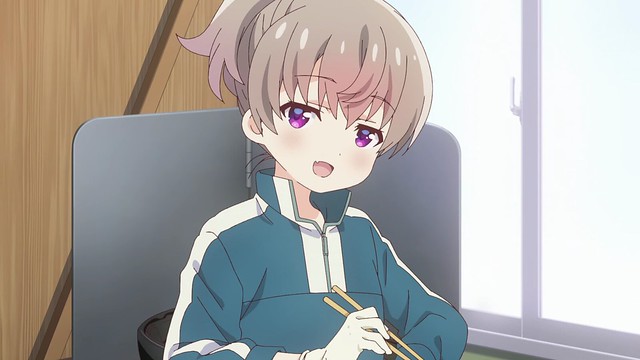 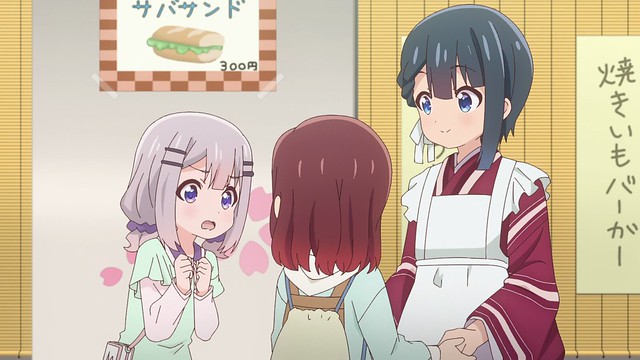 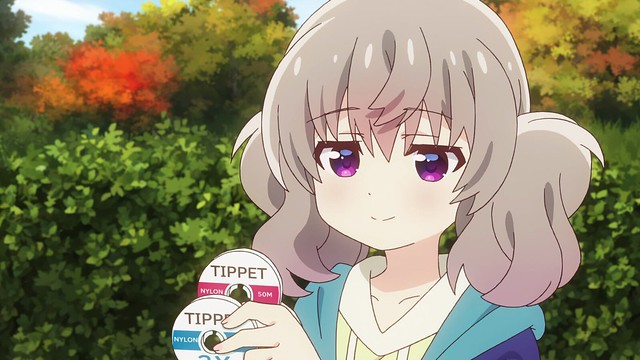 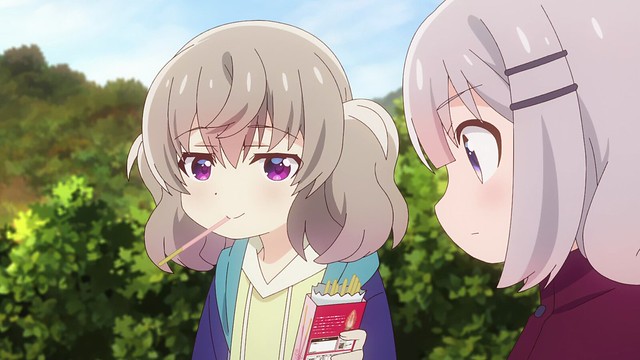 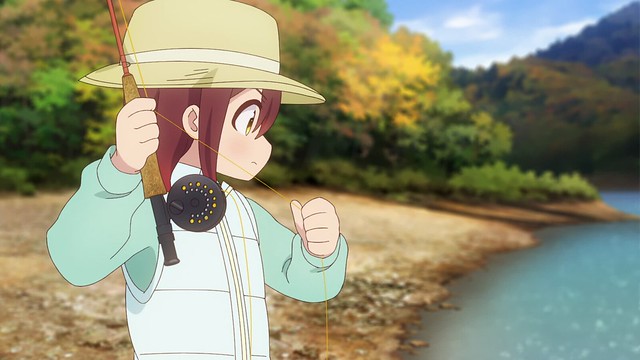 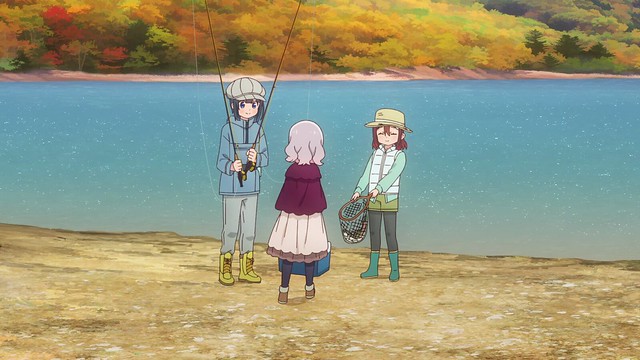 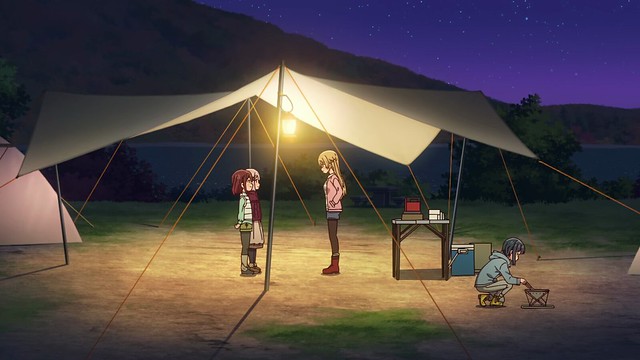 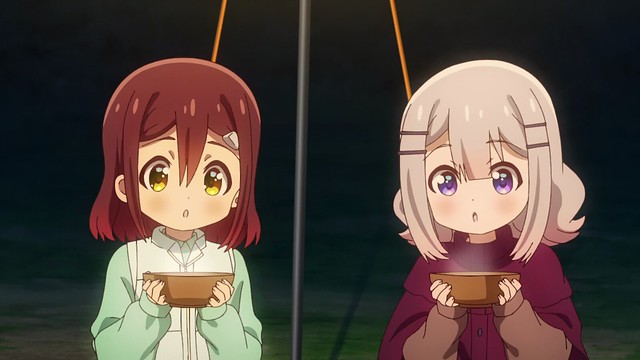 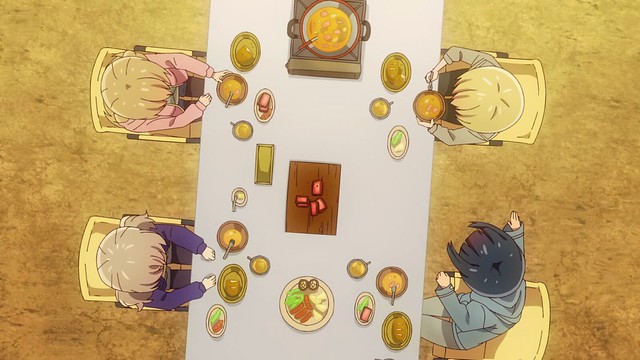 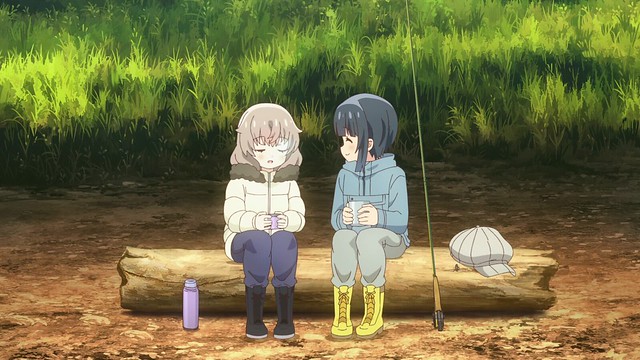 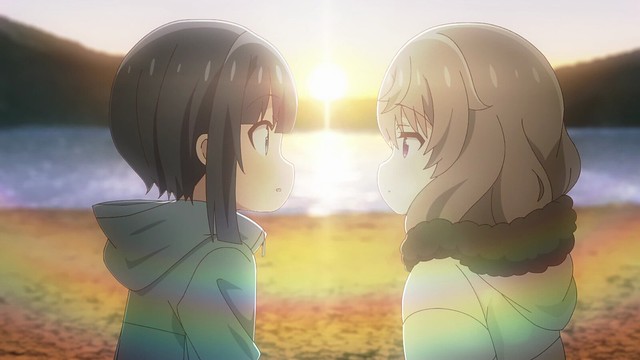 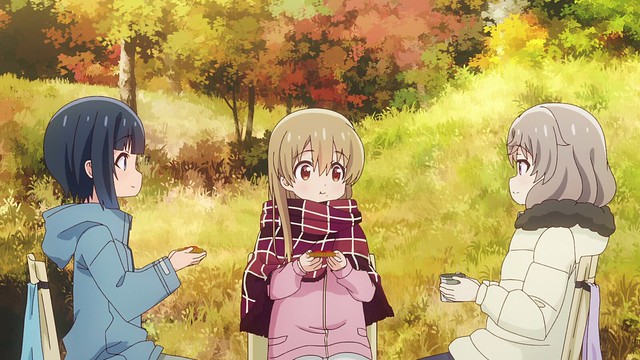 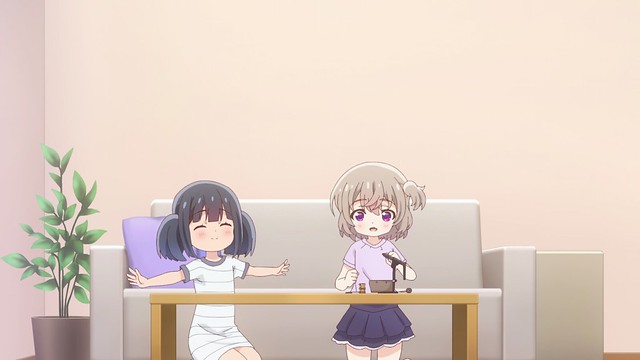 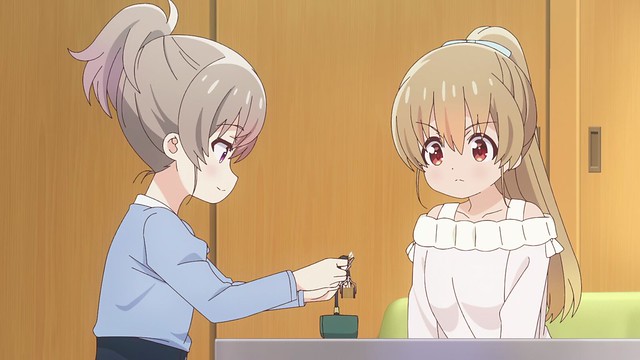 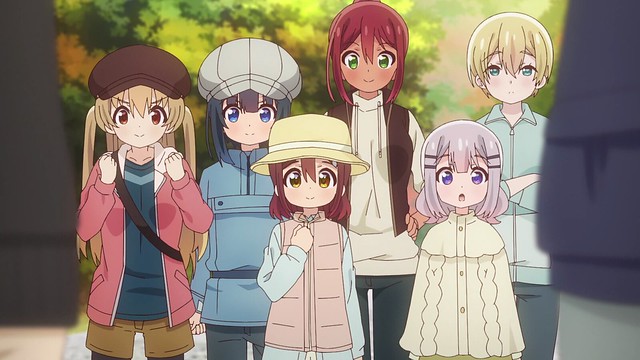 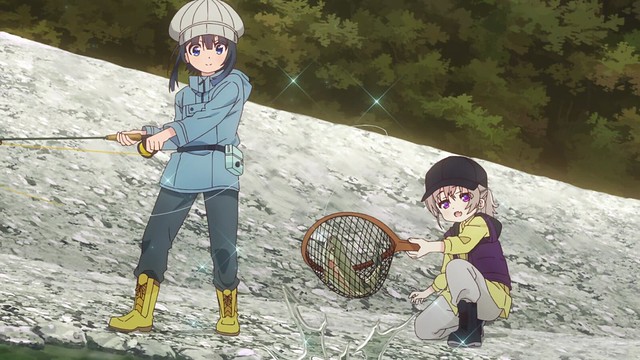 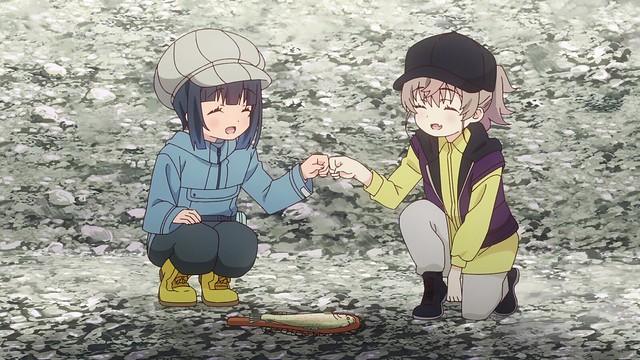 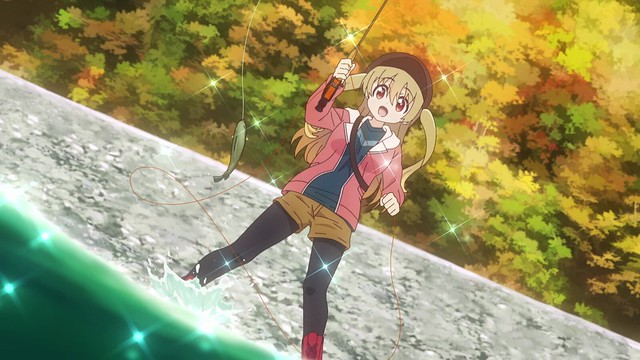 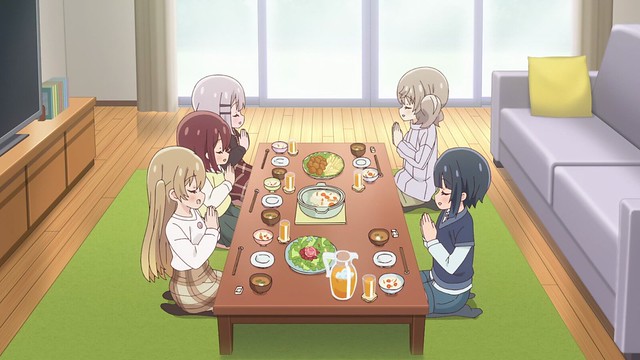 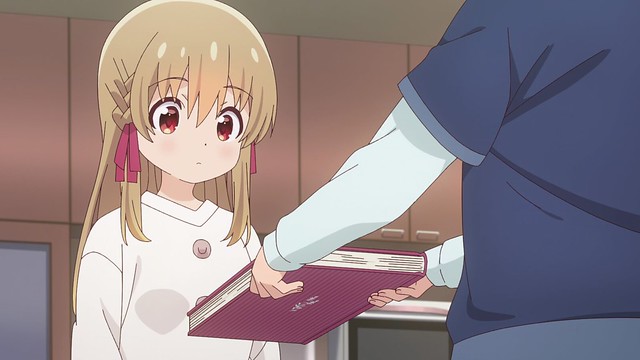 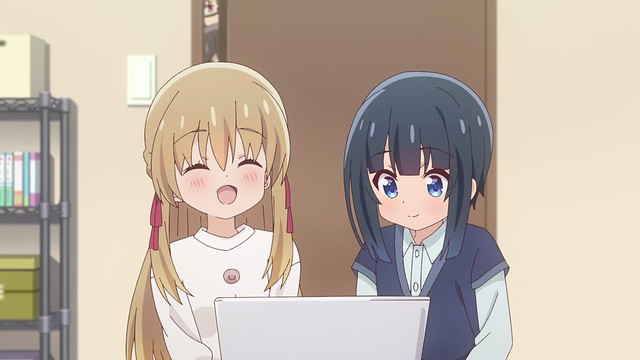 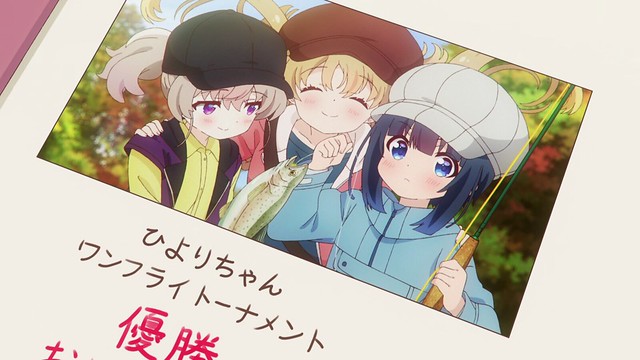 Overall, the light-hearted approach Slow Loop takes towards portraying what one journey of recovery could look like ends up being one of its merits. These topics had previously been explored to an unparalleled extent through anime like Tamayura, which set a very high bar to overcome. Rather than attempt to excel where Tamayura had, Slow Loop instead utilises aspects from other series to show how, while the approach might be dramatically different, the outcomes are the same. Rather than taking photographs, Koharu and Hiyori fly fish in the serenity of mountain lakes and the vastness of the ocean. Away from the endless hustle and bustle of the cities, Koharu and Hiyori are given a more laid-back atmosphere to gather their thoughts. In this way, Slow Loop also indicates that recovery and growth is something that nature can help with: in this day and age, people are glued to their smartphones, and in difficult times, tend to withdraw into virtual spaces rather than connect with other people in a meaningful way. By removing the virtual aspects, both Koharu and Hiyori are compelled to face their feelings, doubts and concerns head-on. Nature, however, offers a gentle setting for this, spurring the characters to do so at their own pacing. The choice of activity, coupled with the fact that both Koharu and Hiyori had lost family, would therefore show that one means of gaining perspective and learning to take a step forwards entails becoming more connected with others, treasuring the bonds one has, and becoming more attuned with the land, to truly spot that life and death is a part of the natural order, and that honouring those who’ve come before simply means being respectful to the land, as well as living life in an honest, sincere and compassionate fashion. Despite being a slice-of-life comedy on the surface, Slow Loop‘s topic and choice of imagery creates a convincing argument for how people can overcome their own struggles if they have the right people with them, and if they take such incidents as an opportunity to step back and open themselves up to new experiences. Seemingly simple anime can have surprisingly meaningful themes to them, and Slow Loop is no exception to this: its twelve episode run may be characterised by comedy and heartwarming moments, as is expected of a Manga Time Kirara work, but beyond this is a touching message about what it means to truly live.