Luminous Witches: Review and Reflections At The Halfway Point

8 Comments Posted by infinitezenith on August 8, 2022

“None of us, including me, ever do great things. But we can all do small things, with great love, and together we can do something wonderful.” –Mother Teresa

With the LNAF Band now assembled, the girls immediately set about preparing for their debut concert. Maria and Manaia end up taking on choreography, while Silvie and Joanna work on costume design. Lyudmila and Inori work on songwriting, and Virginia visits the different groups, offering help where she can. On the day of the performance, a rainstorm rolls into the area, but dissipates by the scheduled start of the performance. Aira and Éléonore kicks the show off with a ballad before the others join and introduce themselves. While Grace is shocked that rainfall has damaged their audio system, Virginia decides to sing anyways, and the others join in – the audience are thoroughly impressed, and Felicia approaches Grace to inform her that the LNAF Band programme is a go. Kicking off the first leg of their European tour is Romagna, but upon arrival, Silvie asks Grace to take her off the roster. While the other Witches head around town passing out fliers, Silvie visits her mother’s grave and speaks with her father. It turns out that Silvie is one of the heirs to the Romagnan royal family, and since becoming a Witch, had been denied an active frontline role because her superiors worried about her. Fearing she’ll disappoint her father, she declines to appear on stage, but a conversation with Joanna convinces her to change her mind. She decides to accept the ribbon Joanna had asked her to wear, and joins the others in singing for the Romagnans. While the other Witches are surprised to learn of Silvie’s background, they are doubly surprised that Silvie’s so ordinary, and Grace reads an interview where Silvie’s father comments on how everything the Witches do will contribute to the war effort. After a series of performances, the LNAF Band stop in Greece, where Maria is frustrated by the lack of progress in a series of new routines she’d designed. Following an argument with Manaia, Maria tries to draft new flight routines but becomes disheartened by the fact that she lacks the ability to fly them. Manaia and Virginia later find the drafts Maria had discarded, and Manaia reassures Maria that it doesn’t matter if Maria can’t fly, because they can fly together. Taking Maria into the open skies, Manaia and Maria manage to perform one of the routines Maria had planned, and the pair reconcile. Later, the LNAF Band practise projecting multi-coloured shields, while Grace considers asking headquarters to increase their budget. At the halfway point, Luminous Witches has settled into a comfortable and consistent pattern, capitalising on its episodes to show how the characters’ individual problems are overcome together.

In a series where there are no Neuroi to directly fight, Luminous Witches chooses to focus on the Witches themselves. Although everyone gets along well enough, each of the LNAF Band’s members bring with them their own background and associated emotional baggage into their journey. Aira had joined because this was all she could do, and she tried pushing the trainees in an attempt to make up for her own declining combat performance. Silvie ends up signing up for the LNAF Band because she wanted to do something more despite constantly being sidelined by worried superiors, but also wanted to avoid disappointing her father, who she felt was under the impression she was actively contributing to the war effort. Maria’s weak magic and flight ability leaves her frustrated that she can’t do more for her peers, and she lashes out at Manaia as a result. However, just because each of the LNAF Band’s Witches have their own problems doesn’t mean they can’t perform well together, and in typical Strike Witches manner, Luminous Witches sells the idea that everyone benefits with help from one another. In the context of Luminous Witches, the idea is that music is what brings together this disparate group of Witches and gives them a purpose that is, while perhaps less visceral than taking to the skies with a high-calibre machine gun and blasting Neuroi, still nonetheless an important role. As each of the Witches overcomes their own doubts and concerns, they become increasingly effective as LNAF Band members. In this way, Luminous Witches is doing a fantastic job of introducing all of the characters to viewers, and by learning of everyone’s backgrounds, this helps viewers to empathise with and support everyone – seeing what each of the Witches struggles with, and how they overcome this limitation makes the LNAF Band’s accomplishments all the more meaningful. Now that we’ve passed the sixth episode, I anticipate that the other Witches will also be given some time in the spotlight before Luminous Witches culminates with a finale performance, one that I hope would see iconic faces return as a part of the audience. 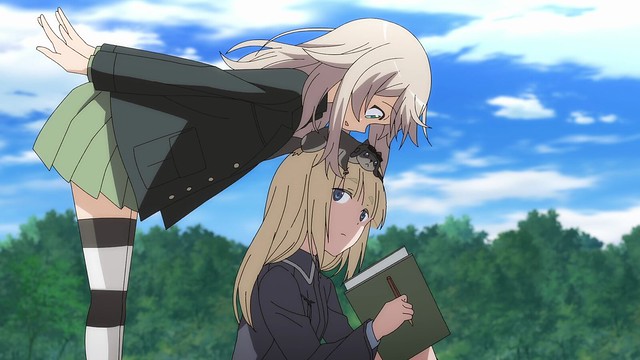 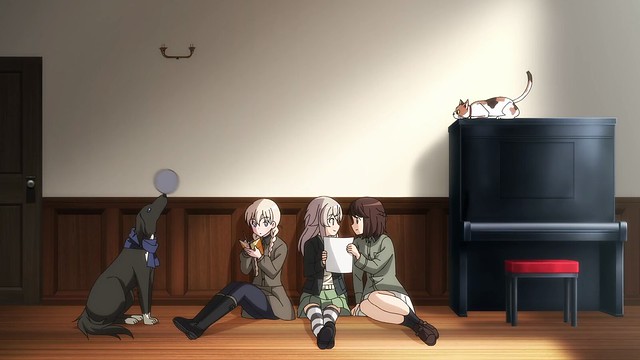 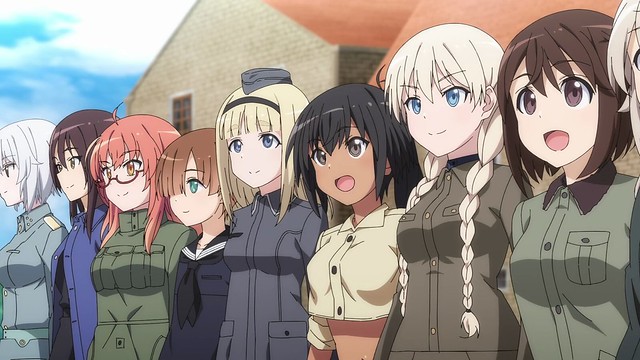 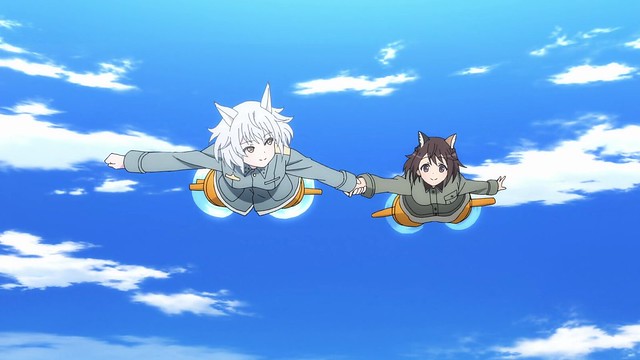 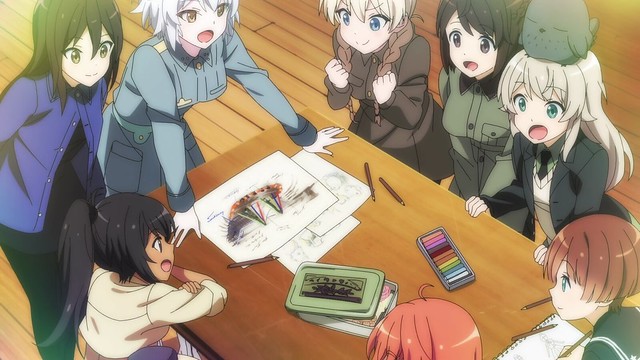 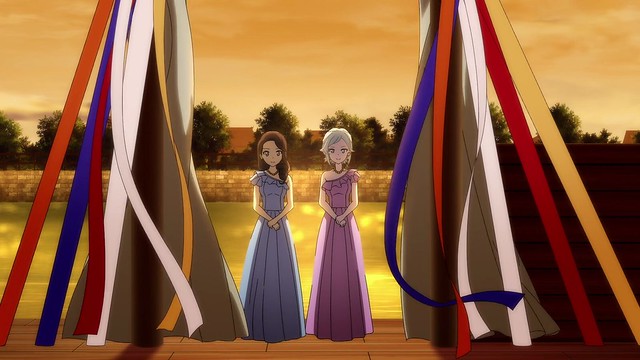 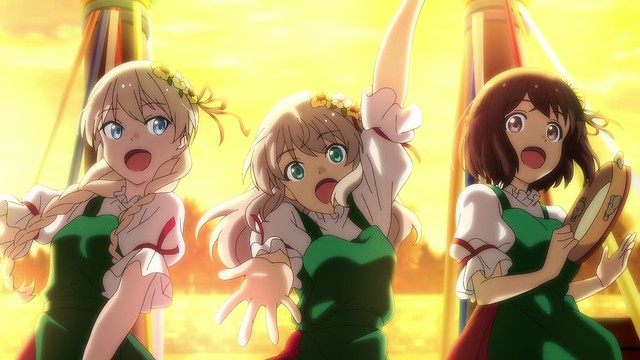 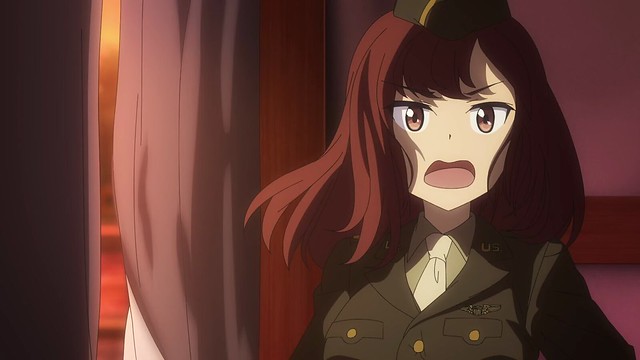 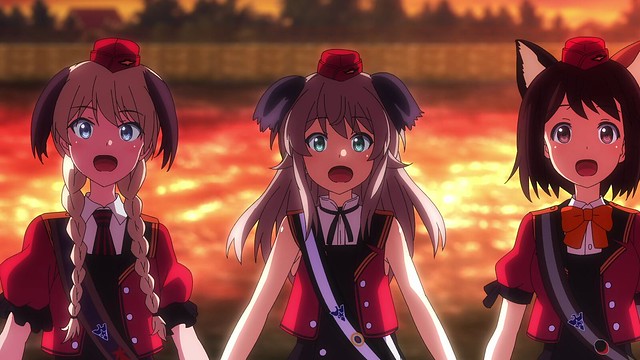 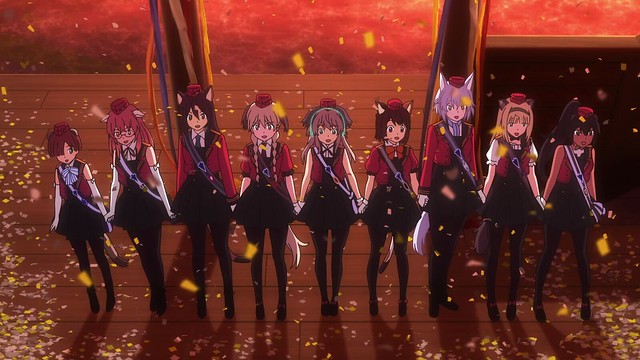 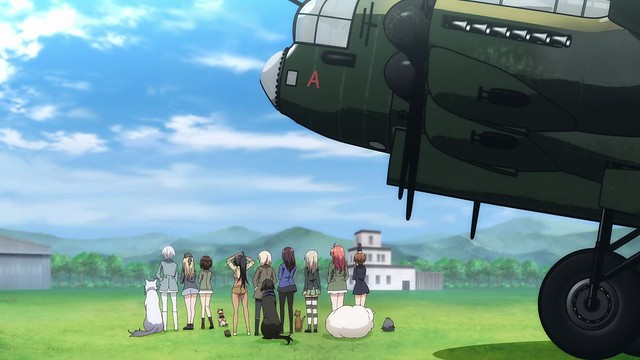 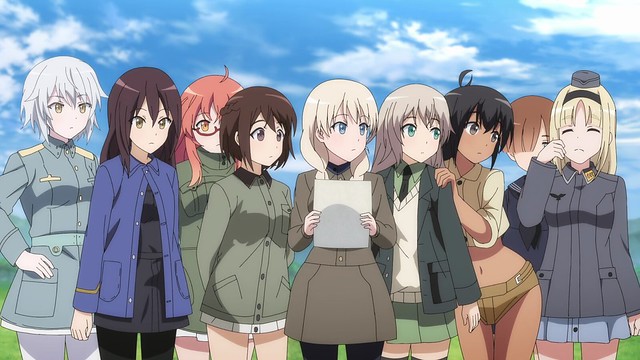 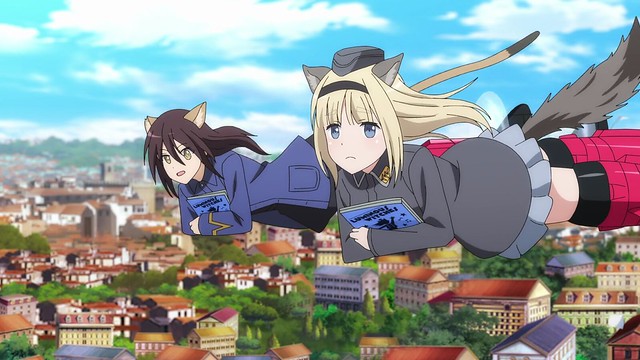 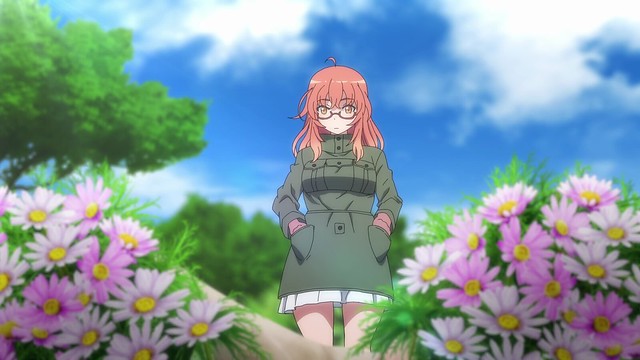 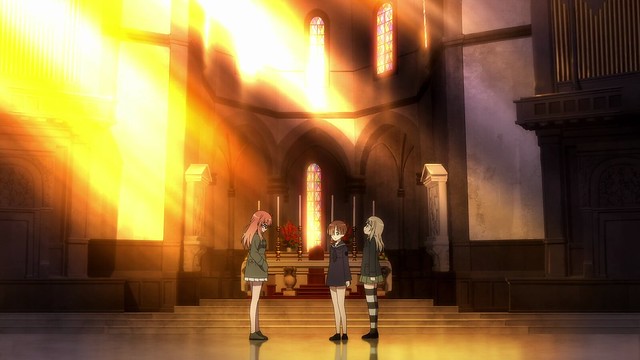 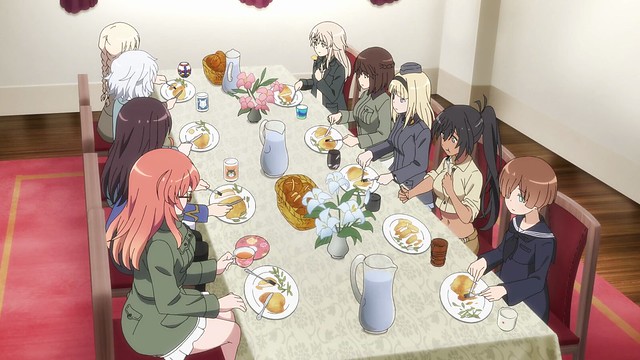 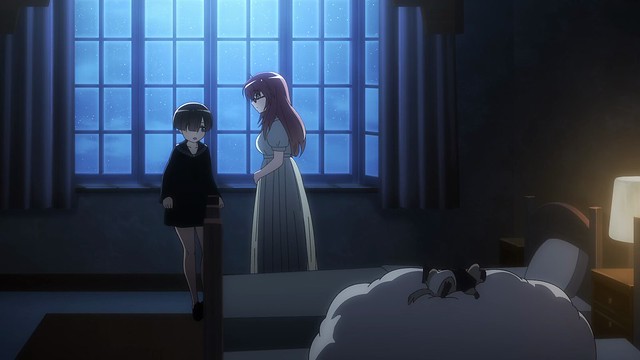 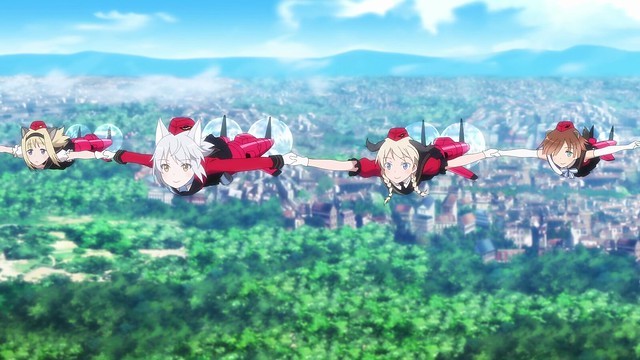 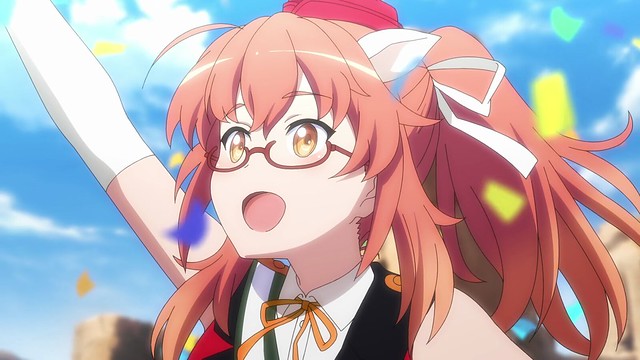 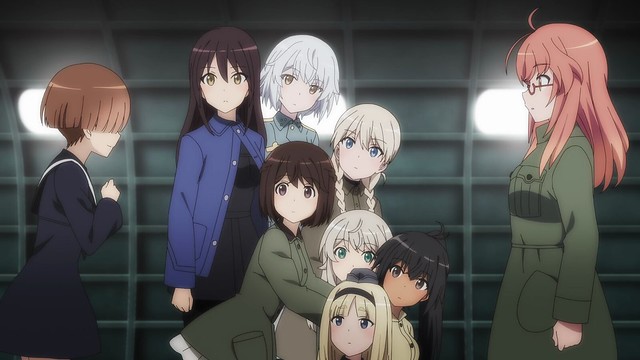 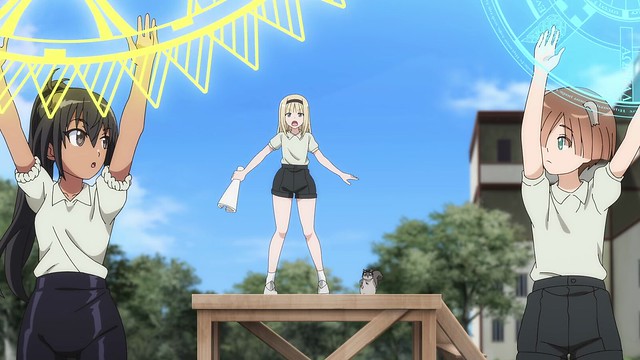 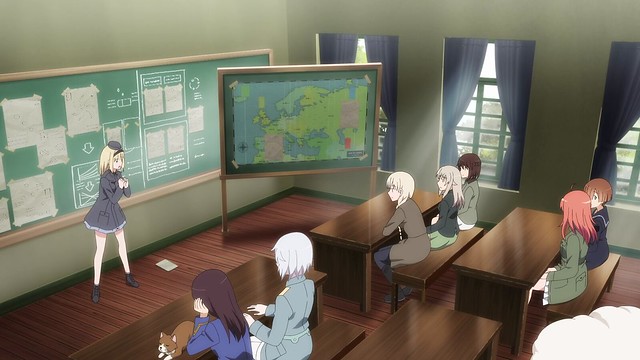 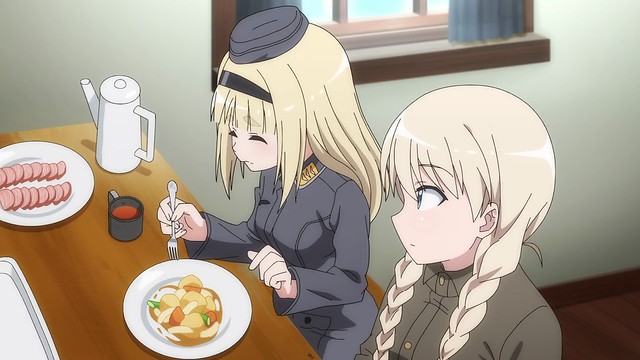 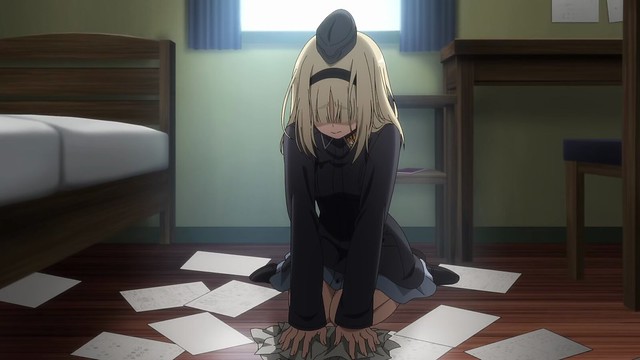 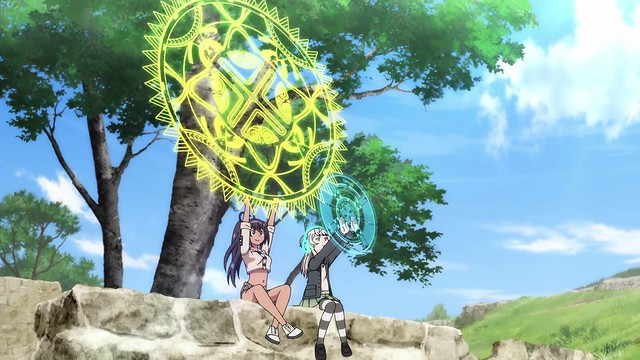 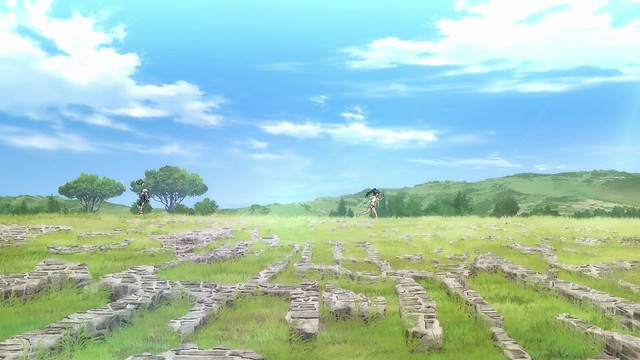 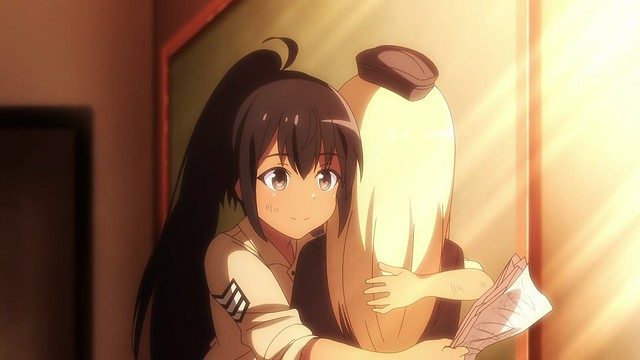 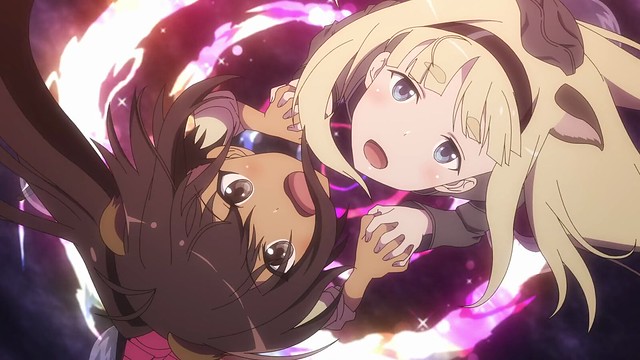 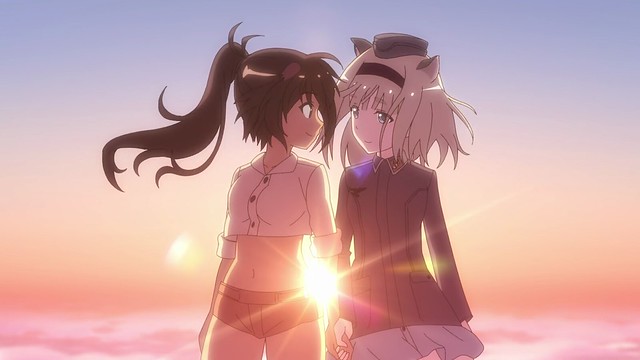 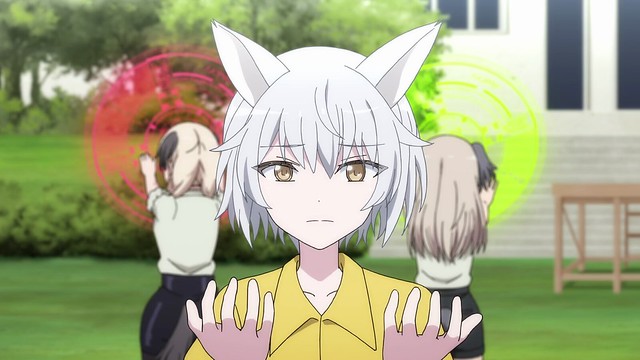 One of the unintended consequences of removing the Neuroi as an active threat from Luminous Witches is that the series ends up feeling more adorable than any previous Strike Witches series. In tenour, Luminous Witches is more similar to World Witches Take Off! than Strike Witches, and the urgency of warfare is completely displaced. Instead, each of the characters exude a vibe that, taken together, makes Luminous Witches feels like K-On!, GochiUsa or Kiniro Mosaic set in the Strike Witches Universe. The troubles that affect Aira, Silvie and Maria, for instance, are nowhere near as emotionally charged as the pressure Mio faced when her Witch powers began declining, or the struggle Hikari experiences in trying to prove her worth as a member of the 502nd. This is a reminder that the Human-Neuroi War has compelled Witches to mature far more quickly than would otherwise occur, speaking to how far-reaching the war’s impact is. However, even in such a universe, normalcy does exist – seeing the smaller scale of the problems that the LNAF Band face in Luminous Witches face shows that despite the scope of the conflict, people still strive to live normal lives. In presenting this side of the Strike Witches universe, the weight of the efforts the other Witch squadrons are putting in to repel the Neuroi becomes more apparent. Strike Witches had originally been an “enemy-of-the-week” excuse to show the Witches and their pantsu, but as the series matured, and more of the world was developed, the opportunity to see more of this world has presented itself. The more laid-back atmosphere in Luminous Witches is especially conducive towards showing the slice-of-life side of things, but unlike World Witches Take Off!, where the humour is derived off crude gags, Luminous Witches is able to build humour and catharsis through natural interactions among the LNAF Band’s members, whom, as time passes, become increasingly familiar and comfortable with one another.

8 responses to “Luminous Witches: Review and Reflections At The Halfway Point”