Where to Watch The First Sunrise, Hiking With Classmates – Yama no Susume: Next Summit Seventh Episode Review and Reflections

2 Comments Posted by infinitezenith on November 15, 2022

“If a man does not keep pace with his companions, perhaps it is because he hears a different drummer. Let him step to the music which he hears, however measured or far away.” –Henry David Thoreau

On New Year’s Eve, Aoi invites Hinata and Kokona over with the aim of hiking over to Mount Tenran and viewing the first sunrise of the new year. When Aoi’s father mentions that Mount Tenran could be quite crowded and suggests that Mount Hiwada might be a better bet. After he offers to drive them, Aoi, Kokona and Hinata unwind by watching some television (where they see Kaede setting out on a hike) before turning in. Although Aoi and Hinata have a little difficulty waking up, they manage to make it to the trailhead and begin the ascent. To make up for lost time, Aoi and Hinata decide to take the more challenging route up Mount Hiwada, but upon arrival, they’re surprised to find the viewpoint’s also packed. Feeling they’ve still got some time before sunrise, Aoi suggests heading to Mount Hiwada’s summit for a better view. Up here, the crowds are smaller, and as Aoi looks out at the sunrise, she wonders if this is what it would’ve felt like to see the sunrise at Mount Fuji. Later, after Kasumi expresses a desire to visit Mount Takao for a New Year’s shrine visit with Mio and Yuri, she decides to invite Aoi because of her previous experience and an ongoing wish to get to know Aoi better. Aoi decides to bring Hinata along with her, and upon arriving at the gondola station, the large crowds prompt Aoi and Hinata to ascend up the trail. Kasumi, Mio and Yuri decide to come with, and while the trek up the mountain is tiring, Aoi reassures Kasumi that it’s okay to take things at her own pace, and offers to carry her shoulder bag. Upon arriving at Mount Takao’s summit, Kasumi, Mio and Yuri marvel at the views and thank Aoi for having supported them; they’re impressed with how Aoi’s taken the initiative and was able to lead, revealing that back in middle school, Aoi had been very shy and preferred to keep to herself. After making their New Year’s prayers (to stay in the same class), the girls share a photograph together. With this, Next Summit‘s pressing through the winter, and the seventh episode gives Aoi yet another chance to shine.

While Next Summit still has yet to prepare Aoi for the physical aspects of the return to Mount Fuji, the series has spent a considerable effort in showing how the mountains, and spending time with Hinata, Kaede, Kokona and Honoka have broadened Aoi’s worldviews, making her more mature, patient and observant. The Aoi who had first tried to take on Mount Fuji was inexperienced and impatient, but here, viewers are shown how Aoi is incrementally improving in both mindset and temperament. Yama no Susume is a series about mountain climbing, but the mountains are just one component of this series; the moments spent off the trails are equally important to Aoi’s development. Her experiences on the trails impact how she conducts herself in everyday life, and ordinary moments feed into how Aoi approaches mountain climbing. For this reason, it is important that Next Summit show these secondary stories and viscerally indicate that, yes, moments in Aoi’s daily life also matter. Aoi’s character isn’t determined solely by her ability to overcome physical challenges – were this the case, Aoi would’ve joined the Mountaineering Club from day one and focused on a more intense, disciplined training regimen. Instead, it is smaller, more subtle cues that speak volumes to the central messages in Yama no Susume. This is where the merits of the series are most apparent, and here in the seventh episode, it is clear that over time, Aoi’s picked up enough knowledge and confidence about mountain hiking, such that she’s now able to share what she knows with others, as she does with Kasumi, Mio and Yuri. In addition, the newfound confidence Aoi gains means that, when the opportunity presents itself, Aoi is willing to push herself a little further and explore, as she does at Mount Hiwada. All of these elements, while seemingly trivial, speak volumes to Aoi’s growth, and among viewers, this instills confidence that, by the time spring comes around, Aoi will be able to fulfil her promise to herself. 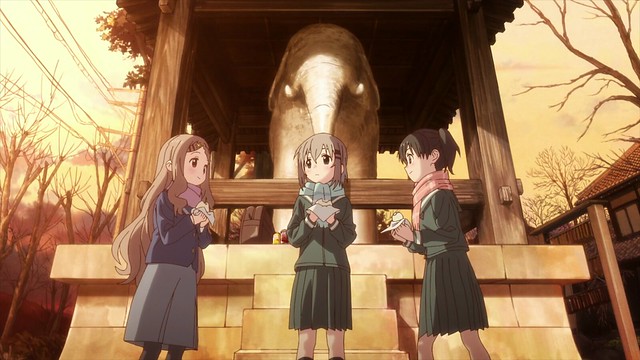 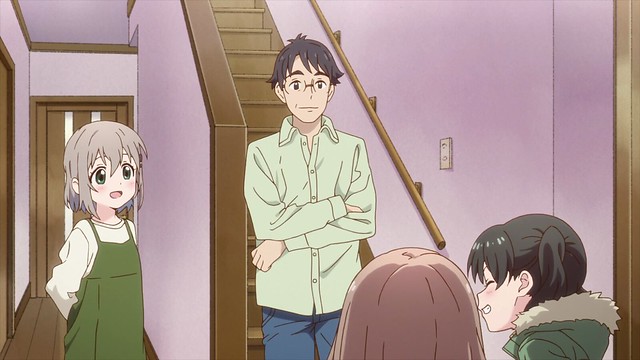 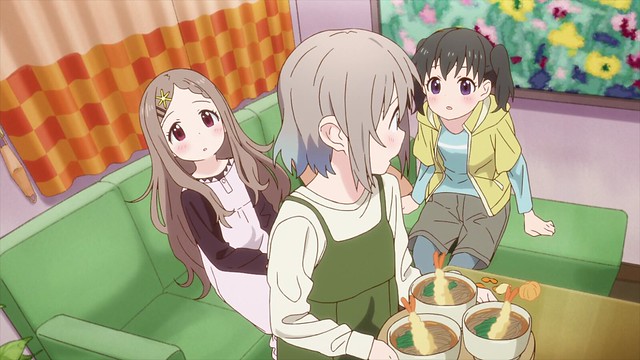 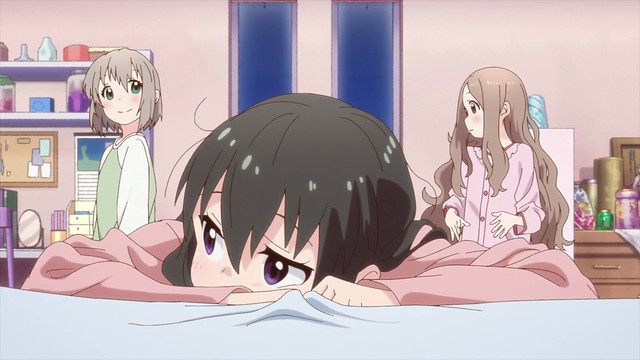 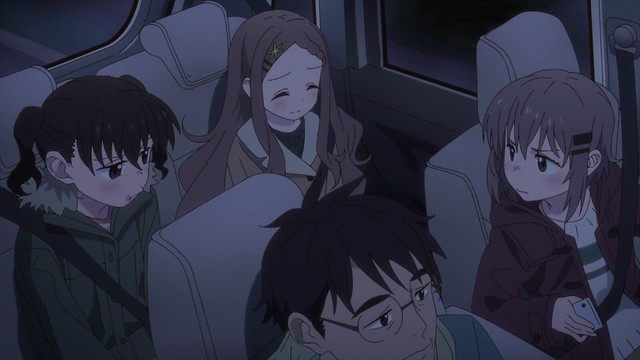 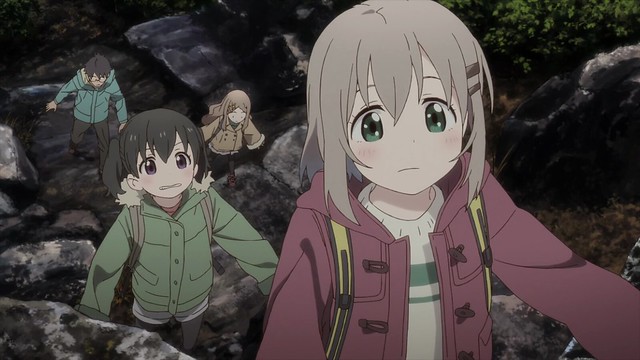 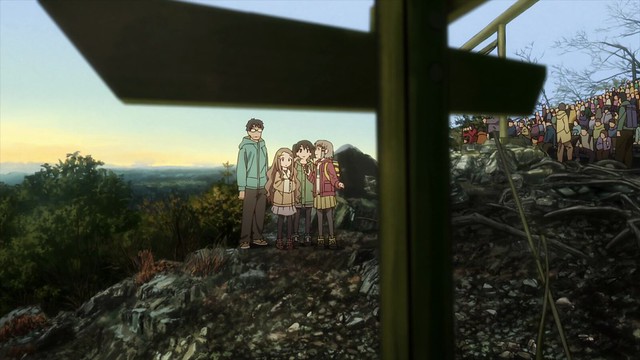 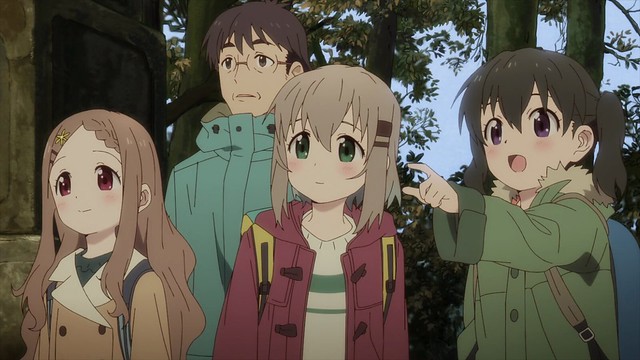 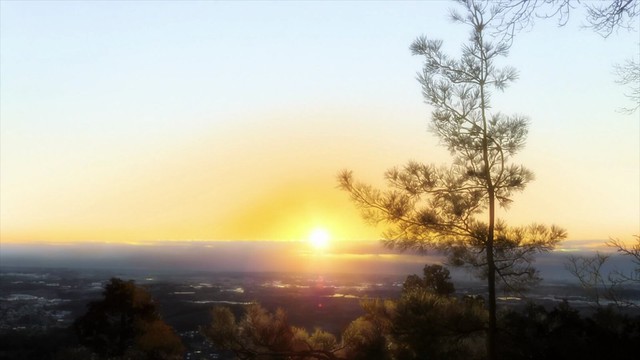 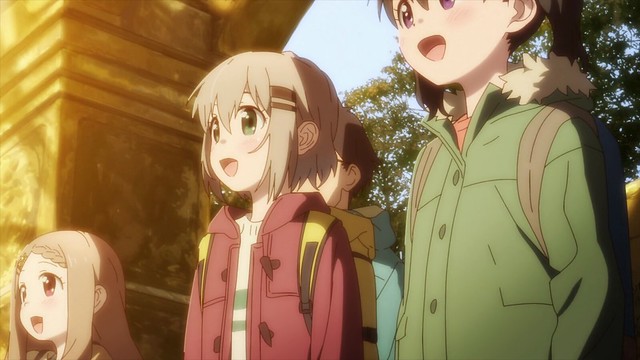 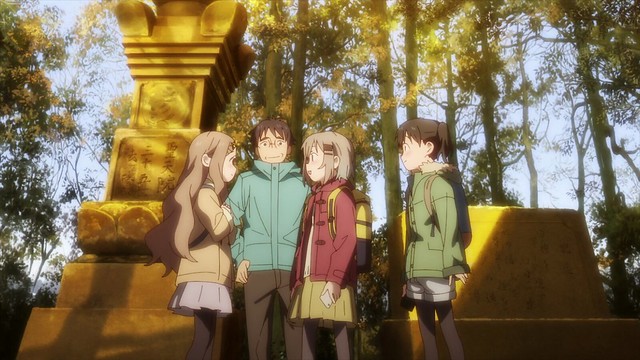 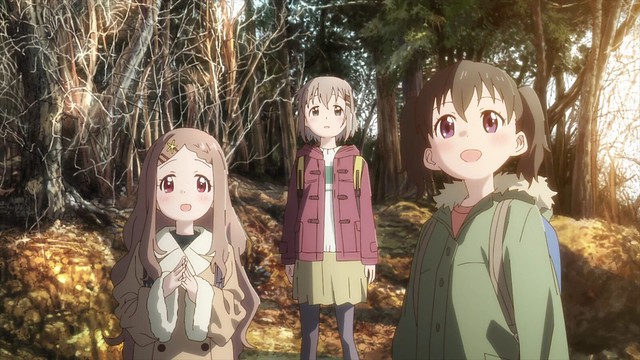 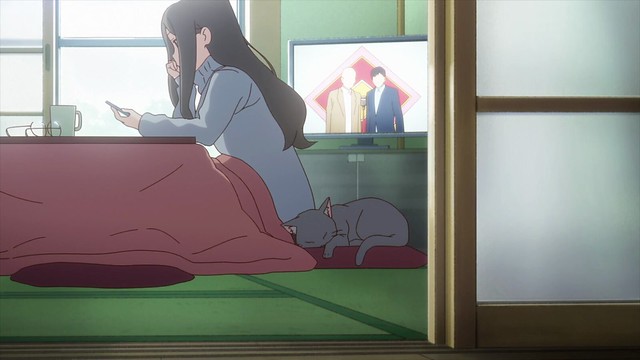 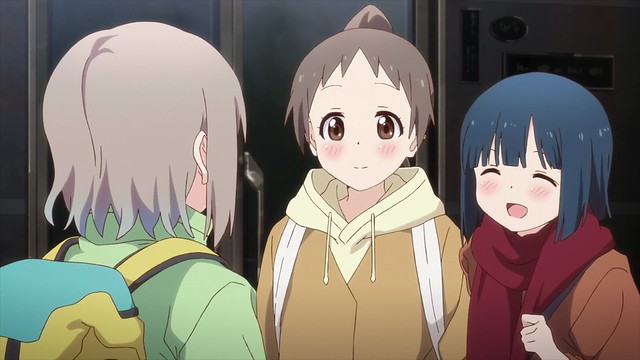 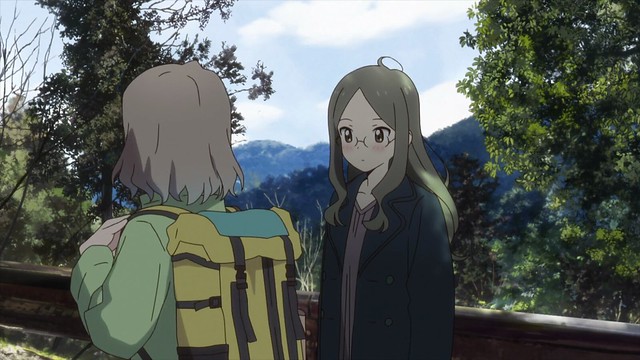 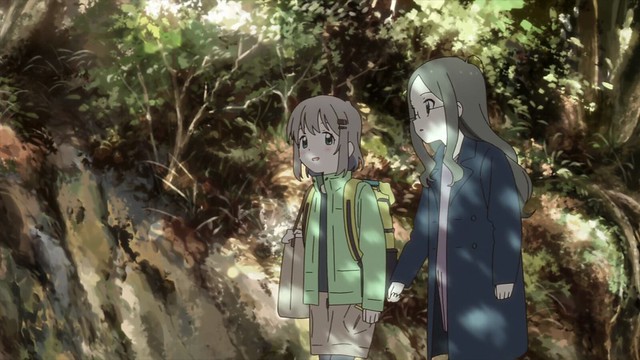 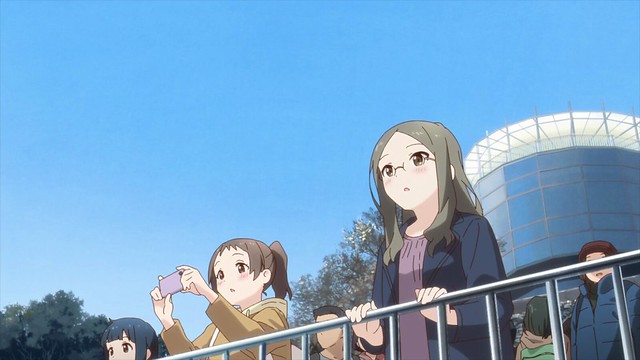 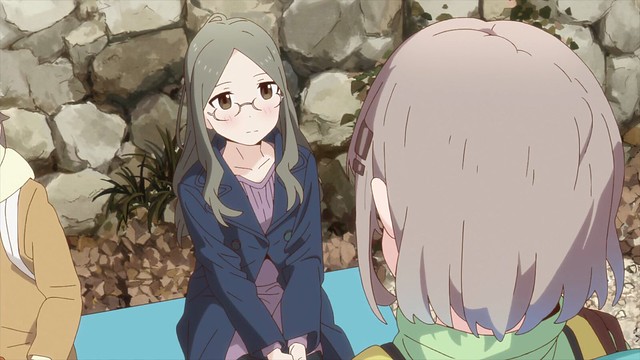 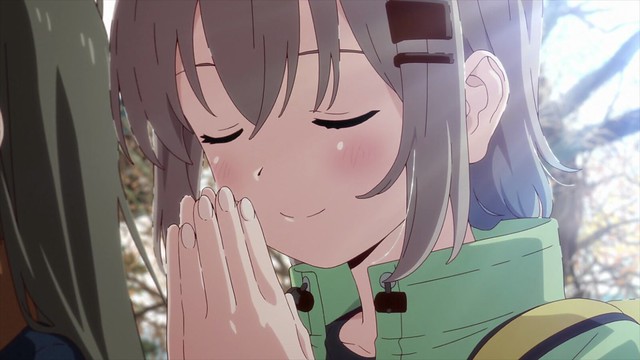 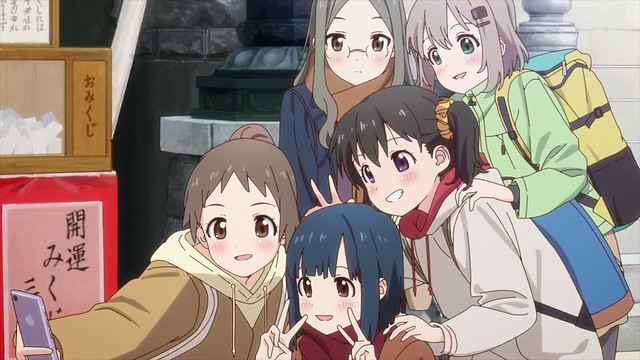 With Aoi being able to bring discoveries and learnings from her mountain climbing adventures to those in her life, Aoi is beginning to impact the people around her the same way Hinata had when they first reunited. Next Summit has represented a fantastic opportunity to really showcase how different Aoi is in the present, versus how’d she’d been even just a half-year earlier. When the third season concluded, viewers had begun to catch glimpses of this when Aoi takes the initiative and walks Hinata back down the trail after the latter suffered from a knee injury. However, to really accentuate this is what makes Next Summit a clear show of the extent of Aoi’s growth. As important as seeing this in Aoi is, however, Yama no Susume is about mountain climbing, and now that we’re over the series’ halfway point, the question of when the series’ focus shifts back to the mountains arises. Next Summit represents the largest Yama no Susume experience to date. Here in the fourth season, Yama no Susume‘s episodes are full-length; six episodes of Next Summit will be equivalent to the whole of the third season. On this assumption, it means that four full-length episodes can be dedicated towards Aoi and Mount Fuji; this corresponds to Next Summit‘s final quarter being dedicated to the preparations for, and eventual ascent of Mount Fuji. The additional runtime in Next Summit has already been effectively utilised to show personal growth, and it is expected that, once spring returns, Next Summit will be able to see Aoi and her friends returning to the outdoors and gear up for the moment that’s been telegraphed quite clearly to viewers.

2 responses to “Where to Watch The First Sunrise, Hiking With Classmates – Yama no Susume: Next Summit Seventh Episode Review and Reflections”