Crystal of HoorayForSomething was kind enough to nominate this blog for not one, but two blogging awards, so I’ll kick things off by giving a big thanks to them. Here, I will cover the details for the Blogger Recognition Award, which operates on four basic tenants. I believe I’ve covered the first already (thank the individual who provided the nomination), and the second is to provide a story about how the blog began. Next, a nominee is to offer two pieces of advice to new bloggers with the goal of getting their blog to prosper and begin participating in the wonderfully welcoming community. Finally, nominees can pick a maximum of fifteen other blogs for this award. I’ll be nominating five blogs, so I’m well under the limit (and the lack of a lower bounds means I could have technically picked one, zero or minus one blogs for this one). With the formalities complete, we may now proceed to the award’s main body. 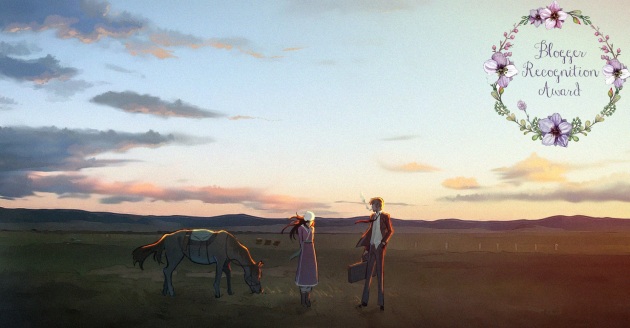 The Story of Infinite Mirai

Before Infinite Mirai At WordPress Dot Com, there was Infinite Zenith At Webs Dot Com. My old website was started with two aims in mind: in 2008, I was quite into Sim City 4 and longed for my own corner of the internet with which to show off some of the cities I had assembled in the game, as well as to share tips about how to build cities. Earlier in 2008, some friends had also introduced me to anime through Ah! My Goddess The Movie, and one friend in particular was trying to pique my interest in Gundam 00. I made use of my website to write out some thoughts and speculations on future episodes, but stopped updating the site once Gundam 00‘s second season had ended. In 2011, the release of Gundam 00: A Wakening of The Trailblazer, prompted me to return to the old site, and I gave it an overhaul, as well as writing the Five Centimeters per Second article that made the site more famous but also pushed it over bandwidth limits. By the end of summer 2011, I realised that I needed another venue to write about anime in a more ad-hoc manner, as well as to allow room for increased readership without exceeding any bandwidth constraints and so, in October 2011, I started the blog in its current incarnation with the goal of using this blog to talk about anime news and do small reviews. The infrastructure at WordPress proved far more user-friendly than those of Webs.com, and as 2012 turned to 2013, I began writing longer articles here. After restructuring the blog to be more organised, and with the end of Gundam Unicorn, I’ve since retired my old website as originally planned, and now write exclusively for the WordPress site.

Find a discipline that you enjoy discussing…

The first tip I would have for a new blogger is not to be persistent and maintain a disciplined schedule. While it is true that new bloggers lose interest in their blogs for a range of reasons (from reduced reader engagement to reduced interest in writing), I find that, if a blogger wishes to continue blogging and engage the community, the most important thing for a new blogger to discover is what they enjoy writing about. For example, while my jobs for the past few years invariably deal with software development, and I could write instructive posts on the differences between Unity and Unreal Engine, or provide instructions on how to use Python to write a simple .csv to .plist converter, to do so would amount to working longer hours than any job, and soon, blogging could become a bit of a chore for me. Instead, I write about my hobbies because these allow for a bit of creative freedom and even humour (where in work, including humour in a product for a client would be unprofessional) to be interspersed, and I’ve found that I can use my hobbies (anime and gaming) to hit several birds with one shell: I can exercise my critical mind, draw connections between the different things I watch and experience, occasionally joke about it, and as of late, interact increasingly frequently with a community that shares my interests in hobbies and entertainment. By talking about something I love that’s also outside of my nine-to-five, and exploring its diversity, blogging never feels like work.

…but also be approachable in your presentation

My blog is written with largely formal, academic-style prose primarily as a consequence of my preferred writing style. While it allows me to produce technical and academic papers very quickly (blogging doubles as writing practise for me), it is for this reason that I am so abysmal at creative writing. In spite of this seemingly colder prose, I’ve got a handful of readers who’ve taken the time to stick around and read this blog, and in rarer cases, will drop by for excellent discussions. From a technical perspective, I’m no different than The Nihon Review or other “serious” anime blogs, but I feel that what sets me apart from them is that I aim to make my writing comprehensible and approachable. Rather than trying to persuade (or in some cases, intimidate) by dint of eloquence, I strive to ensure that readers know where my perspectives are coming from, as well as encouraging readers to speak up if they digress, concur or else have something interesting to add to the conversation. The point of a blog is to create a starting point for discussion (or in my case, this blog doubles as a personal online journal), not to intimidate other readers and force upon others a narrow perspective on how one should enjoy their anime. An approachable blogger is someone who answers comments concisely, with the aim of understanding them rather than challenging them: by gaining appreciation for a new-found perspective, one becomes closer to the blogging community, in turn helping one continue their blog into something they enjoy writing for.

With my questions answered in full, here are the blogs that I will nominate for the next round of Blogger Recognition Awards.