Nominated by Jusuchin of Right Wing Otaku, the Creative Blogger Award is given in the same spirit as the awards I’ve done previously. The rules for it are simple enough: thank the folks who made the nomination (thanks, Jusuchin!), nominate a variable number of blogs for the award (I’ve picked five, but that number ranges from five to twenty), notify them of said award and share a maximum of five things about oneself. Seems easy enough, at least until I realise that I’m not particularly good at talking about myself. With that being said, what I am good at is putting these things off for far too long while I’m engaging in other pursuits, so that I’m writing this in December 2015, some three months after the original nomination, already yields some insight into one thing about me, that I’m unnaturally busy. Given that this December night sees a respite in my schedule, I’d figure I’d try and finish the award as best I can, so let’s begin…five things about myself. I’ve tried to pick things so they don’t overlap with what I’ve done for previous blog awards, and failing that, I’ll expand on them in greater details. 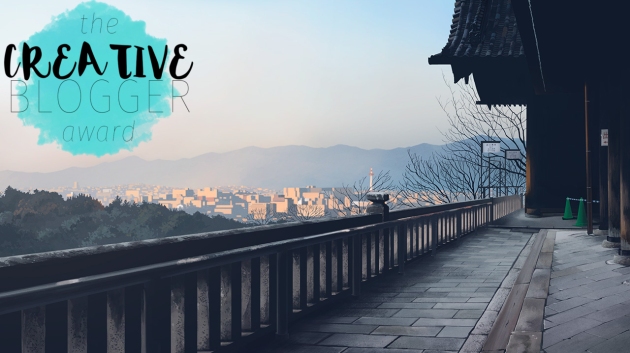 Readers perusing this blog will note that I often tend to go off-mission when I do anime reviews, making frequent remarks about where my work stands and what I’m likely to do next. The reason why I constantly make these call-backs is to, believe it or not, keep me on track: this blog acts as a diary of sorts, and it’s not password protected like my research blog, making it easier to access on mobile devices. So, what are the simulations and programs that are so often talked about here? I work with a research lab that studies computational biology and biological visualisation, making use of game engines to illustrate the environments and processes within biological systems. My aim is to design these systems in such a way so that they are intuitive, easy to use and can tell a story more effectively than existing supplementary materials to biology education. Because the project exists at the crossroads of biology and computer science, I spend as much time perusing cell biology journals as I do implementing the algorithms for my project: it’s truly a multi-disciplinary task, and that there’s something new to learn each day makes it very exciting for me. Besides impacting what I talk about, my background also has substantial influence on my writing style, accounting for why I do not use a more casual voice in my anime and game reviews.

I exercise regularly to keep fit for the sole purposes of c maintaining a healthy state of mind. I lift weights two to three times a week, practise martial arts every weekend and, weather pending, bike or hike. There’s a definite joy to developing a routine and then maintaining the discipline needed to stick to this routine: it keeps the mind sharp and the body alert. The other aspect I enjoy is that sense of tiredness after a good workout. I typically lift in the morning before my lectures and research kicks off, and while I’ll be physically tired after lifting, my mind is fully awake and ready to work. Similarly, after a long hike or bike ride, I’ll be sweating and maybe aching about, but psychologically, I feel fantastic, ready to take on the world. The end result of all this is simply feeling better, and for that, I don’t mind getting up earlier to work out. So, this ties in with my blogging habits again: it means I tend to sleep a little earlier and not watching so much anime, accounting for the delays in posts that readers might’ve noticed.

A long time ago, I used to be a clarinet player for my middle school’s concert band, and also taught myself how to play the trumpet so I could join the jazz band. For me, music represent a form of communication that allows for a particular mood or emotion to be expressed in the absence of words, in such a manner that it can be understood independently of culture, language and station. For this reason, playing music in a band was definitely fun, and while I was quite poor in the beginning, I improved over time. I believe I mentioned this in one of the Hibike! Euphonium posts, but our band eventually participated in several competitions that we won awards in. In the present day, I’ve not played a musical instrument, but I still appreciate music to a great extent; good music can bring out the emotions in a moment, and a handful of anime have made my cry simply because of how the music in a scene complemented what was happening on screen so well. So, if I occasionally talk about the music in an anime, this is why.

It’s not so unusual for an anime fan to be interested in the team standings in the National Hockey League, is it? Of course it isn’t; I’ve been following the Calgary Flames since 2004, ever since they made that fantastic playoff run that brought them to their first Stanley Cup final since 1989, and while they would fall to Tampa Bay in game seven, the run itself was absolutely thrilling. Since then, I’ve been watching the Flames’ ups and downs, attending a few games here and there; while they were struggling over the past few years with their offensive game, ever since they’d signed Johnny Gaudreau and Sean Monahan, things have been much more exciting. Some of the best hockey I’ve seen with the Flames are when they’re behind a number of goals in the third period, and some theatrics by Gaudreau allow the Flames to force overtime, leading to a win. Watching these games is a suspenseful experience, but it’s also a neat call-back on life itself — until the clock runs out, it’s worth one’s while to keep trying because that effort may yield something.

The diverse range of things I do and talk about, even in just this awards post alone, can be succinctly described in a single word: “multi-disciplinary”. I’ve become increasingly aware that I do not really have a single field or activity I excel at, but the plus side is that I have enough depth to go with the breadth, allowing me to connect things across multiple disciplines. This is quite beneficial for my research, and for this blog, it means drawing upon some of the most unusual comparisons around to write my posts. Thus, everything comes together to yield the somewhat unusual writing style that I employ for this blog, and admittedly, it’s a thrill to both write, read my old posts and engage in discussions with the folks who leave feedback here. For this reason, this blog has endured: being able to write for fun and having a chance to converse with other individuals sharing similar interests has been more than enough of a reason for me to continuing to write this blog, even against my predictions that I’ll be slowing down in light of whatever life throws at me. So, I foresee that I’ll probably continue blogging until another activity displaces my time.

Nominations for the Creative Blogger Award have been provided in an older blog post: I follow a limited number of blogs, and usually, I aim to nominate blogs for unique content, or if they’re relatively new and merit a bit of recognition to motivate their author’s continued resolve to write. At the time of posting, this blog’s been around for a shade over four years now, and I look forwards to seeing what new directions it will take, as well as how it may find relevance with new readers.