As with the ABC award, I’ve opted to discard and modify some of the requirements. I’ve fulfilled the terms for the first bullet, and as with the ABC award, I don’t particularly like the original award’s design, so I’ve made my own. I’ll subsequently proceed to the second objective and answer some questions that Ninetybeats has posed for me. 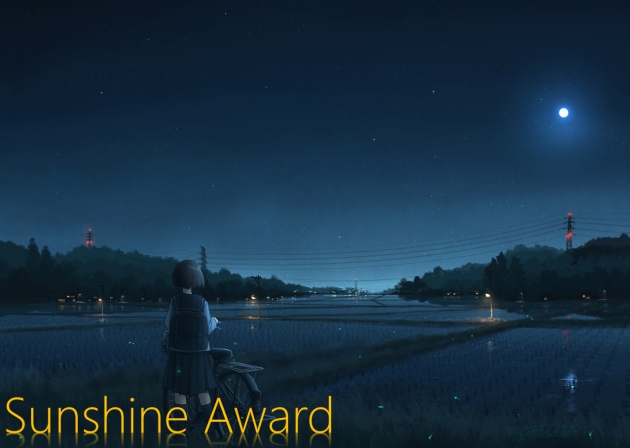 Do you see trends in the anime blogging community? For example less or more blogs, certain topics etc.

With the advent of powerful publishing platforms such as WordPress and Blogger, to name a few, it’s certainly become easier for individuals to start and maintain their own anime blogs. When I entered the blogging scene, anime blogging was still very much the domain of well-established writers whose names were known by many in the anime community. Presently, with tools that have made it easier to write and publish, I see an incredibly vast array of blogs dealing with anime of all sorts, each taking a unique approach towards presenting their content. There are some blogs that post short, succinct accounts on what makes an anime worth watching, while others will spend a fair bit of effort in fleshing out and analysing a very specific topic, and yet others specialise in things like figures, location hunting or music. The increasing number of blogs reflects on the new tools’ ease-of-use for bloggers, which include features for bloggers to find other bloggers writing about similar topics. Such tools allow for communities to be formed amongst the bloggers, and assuming that more anime fans express an interest in opening their own blog, the anime blogging community will eventually shift towards becoming a more pronounced subset of the anime community as a whole.

How has your view on anime changed over the course of time?

I’ve not always been a fan of anime: my first experience with anime was a decade ago, through the AniMatrix‘s Second Renaissance. Watching a human skull being physically torn in half left in me the notion that anime was grotesquely violent and I had been quite hesitant to watch anime. Some encouragement from my friends back during high school, coupled with a screening of Ah! My Goddess The Movie, changed my mind. Ah! My Goddess was optimistic, friendly and amusing, too, which eventually led me to pick up the TV series. The following year, a friend introduced me to Gundam 00, and I suddenly realised that anime could delve into some rather interesting topics. Since then, I’ve watched anime quite regularly, and at present, I find that anime is an excellent, diverse medium that offers no shortage of content that can fit a variety of situations.

What is your favourite type of blog? Episodic, reviews, or a mix of anime and other media?

Mixed media blogs are the best option available here, as they demonstrate a blogger whose interests are reasonably diverse. These blogs cover a variety of topics and therefore can be quite fun to read. A well-written episodic blog, such as Random Curiosity, is also very useful: I typically read them to rapidly recall episode summaries and events for my own blogging. Otherwise, the type of blog is less relevant to me relative to the nature of the content they possess, as well as the manner in which it’s presented.

How leading are the opinions of other bloggers in your choice of anime or manga?

Their impact is minimal: although I may consider another blogger’s opinion, at the end of the day, I follow my own judgement and interests when it comes to picking out the anime and manga that I choose to enjoy. The reason for this is because each blogger has their own background and interests, in turn impacting the sort of things that most appeal to them, and as such, what works for them may not work for me (and vice versa).

If you’re using MyAnimeList, what changes would you bring to the website?

I do not use MyAnimeList despite having an account; using their front-end to navigate and manipulate information is somewhat of a pain in the lower backside, so I suppose that a change I would implement would be an overhaul of the user interface elements such that entering information is smoother. In addition, the tables that each user gets should feel like they’re more of a part of the site rather than being a separate entity (in terms of design and appearance).

Each blog nominated here, I follow for their unique content. Their readership vary widely, but all of the blogs below merit checking out, as they each represent a different approach towards anime blogging. For the nominated blogs, I emphasise that there is no obligation to actually fulfill the terms outlined by the award (it’s done merely for fun). Each blog here is still active to some extent (the criterion is “at least one post over the past month).

4 responses to “The Sunshine Award”