An end of summer reflection: On pleasant weather and the dog days of summer in Yuyushiki

“August has passed, and yet summer continues by force to grow days. They sprout secretly between the chapters of the year, covertly included between its pages.” —Jonathan Safran Foer

While Yuyushiki is primarily about Yuzuko, Yui and Yukari’s time in their high school’s data processing club, one of the aspects that is often passed over during discussions of Yuyushiki is its depictions of the summer season. Throughout Yuyushiki, the lighting and colours are typically of a moderate intensity and saturation to convey a gentle mood throughout the anime as Yui and the others go about their everyday lives in the data processing club, looking up uncommon topics and having enjoyable discussions about the things they learn during their time in the club. However, when the hottest days of the year arrive and classes are no longer in session, the atmosphere in Yuyushiki takes on a different tone. Summer skies are of a a dazzling blue hue, with the landscapes fading away closer to the ground, where moving air creates a sense of heat. The brightness of the landscape reinforces the sun’s intensity to accentuate the hot days of summer, and to complete the presentation, the sound of cicadas are openly heard. In spite of the simpler artwork of Yuyushiki, it’s quite evident that summer is in the air. There’s a palatable sense of excitement at the unlimited possibilities conferred in a season characterised by long days and pleasant weather; all of these feelings are captured in Yuyushiki to give the sense that this is really an anime to be watched during the summer, and from a personal perspective, the summers of Yuyushiki remain the most vivid in my memories of this anime, despite the fact that only two of Yuyushiki‘s original twelve episodes were actually set during the summer itself. 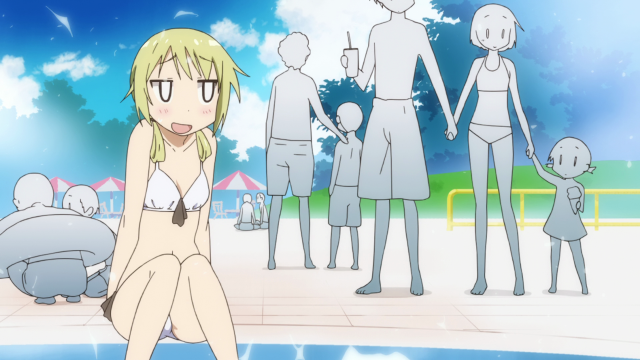 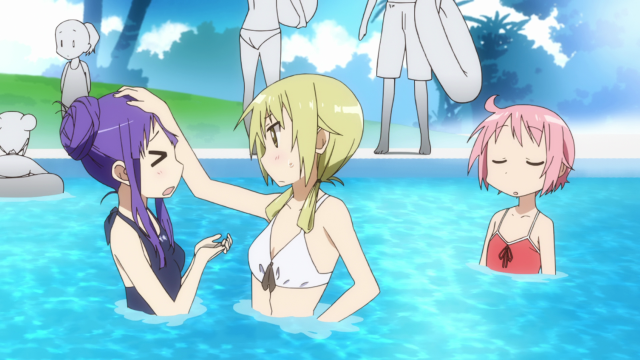 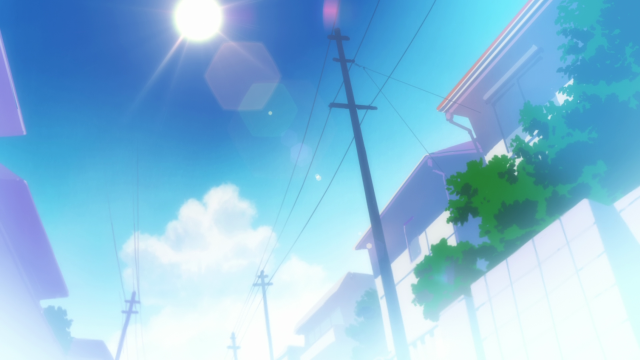 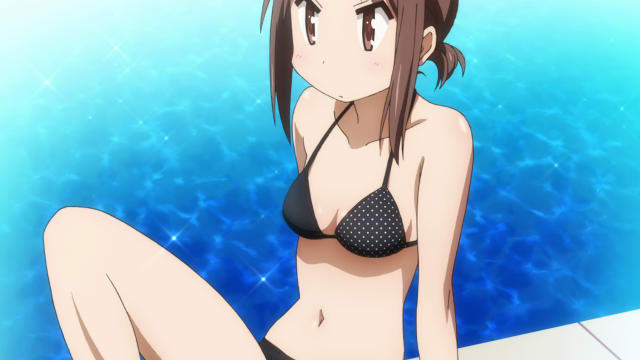 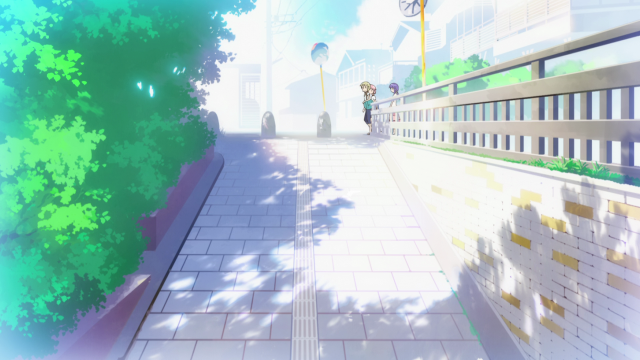 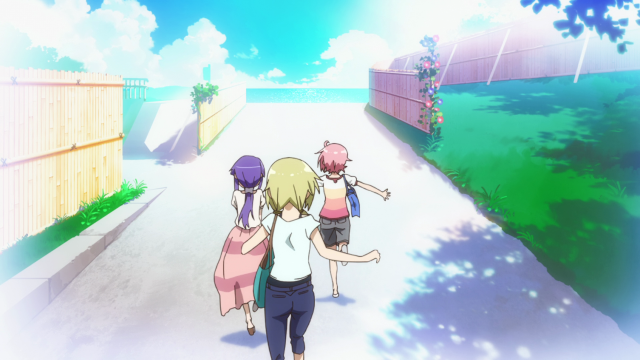 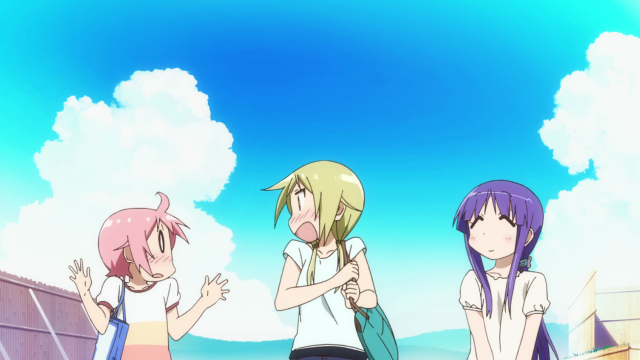 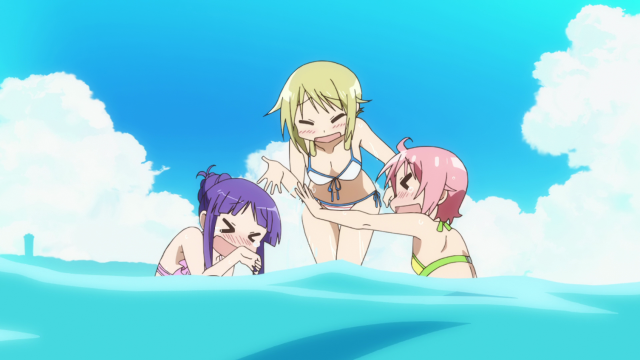 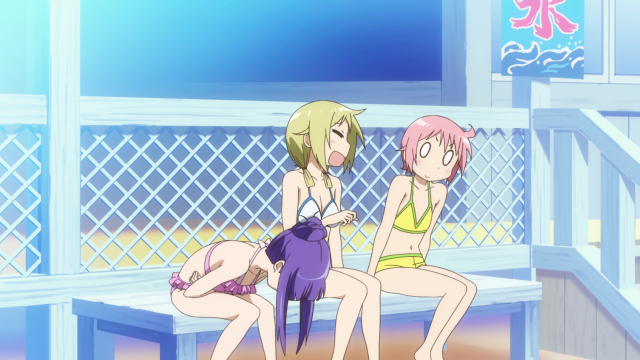 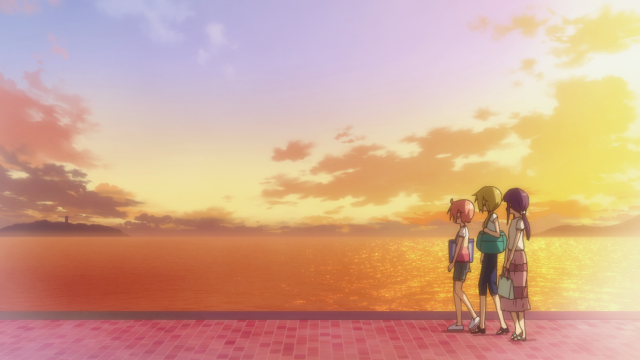 It’s been some four years since I’ve watched Yuyushiki, and the fact that the summer episodes remain quite memorable is a powerful testament to the effectiveness that the use of visual and aural elements can have in shaping the viewer’s recollections of an anime, and in retrospect, some of Yuyushiki‘s best moments are set during the long days of summer, when Yui, Yuzuko and Yukari capitalise on the weather to create their own memories. The fantastically agreeable weather also brings to mind the events of my own summer. While I’m no longer a student and therefore have no summer vacations, this has not diminished my enjoyment of the season. Owing to a high pressure system in the area, the whole of this summer has been sunny and hot: from the various hikes I’ve taken, to the quiet days spent at the local library or bookstore, from the journeys out into the mountains to watching a partial eclipse happen, this summer certainly has been enjoyable. Today is the last day of August, and with it, we march into a season where students begin returning to classes. For me, this means the gradual cooling of things, the transition of the landscape from verdant to gold, and traffic jams. In my Tamayura: More Aggressive review four years ago, I reviled this, saying that it was a return to “that most hated of seasons”; looking back on my old words, it’s a bit of a surprise to learn that my outlooks on things have changed considerably since then. Autumn is a beautiful season, with its own merits that make it worthwhile, and I imagine that this shift of heart perhaps is a sign that I’m growing older. Furthermore, contrary to my assertions four years earlier, I’ve not completely forgotten Yuyushiki, and that in itself is an indicator that the anime was worthwhile to watch.